By 1987, Transformers: Generation 1 started to move into its more wizened, middle-aged phase. By this point, all traces of the original line had been replaced by products that were far more suited to the playground than their forebears. Let's be honest, amidst the sea of broken windshields, lost wings, chewed fists, and snapped hinges finding an intact Transformer from 1985 was no mean feat.

Repugnus is a clear representation of what the majority of post movie Transformers set out to do. Gone were the amenities of die-cast, rubber tires, and piles of essential (and losable) accessories. Transformers became more self-contained while relying on a singular built-in gimmick to market themselves.

They always came with a gun too. And you know what? No child could ever hang on to those for more than a day. 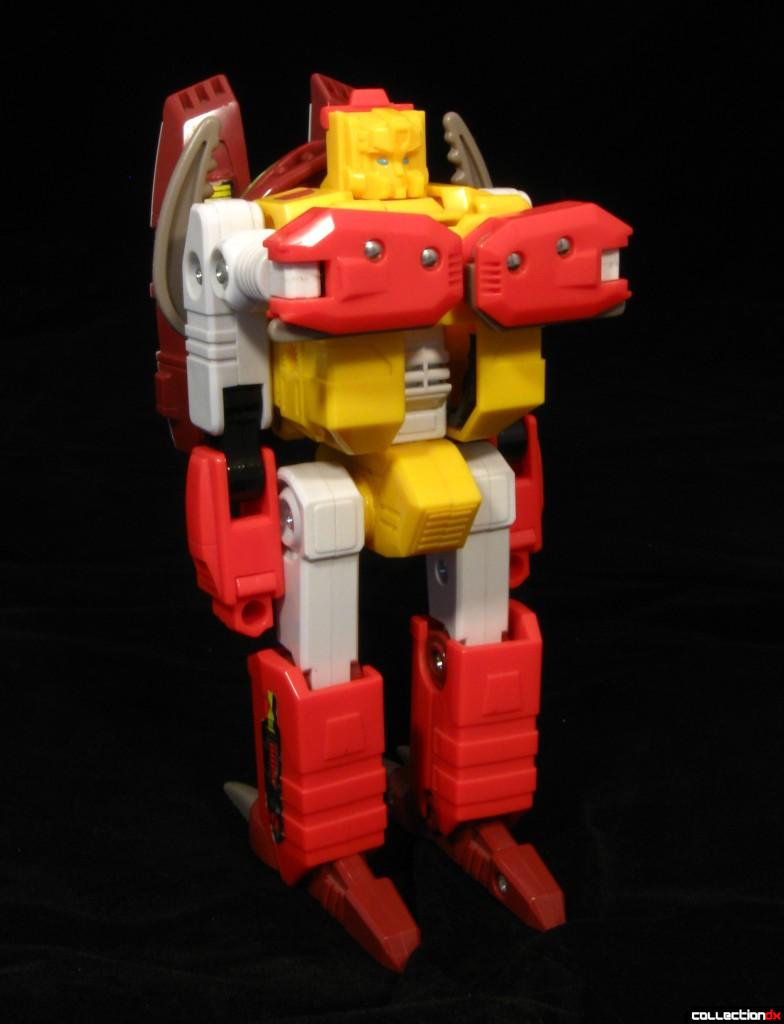 Repugnus is a very straightforward design. Constructed from indestructible plastic, even the most rambunctious child would have trouble rending one of this toy's limbs. 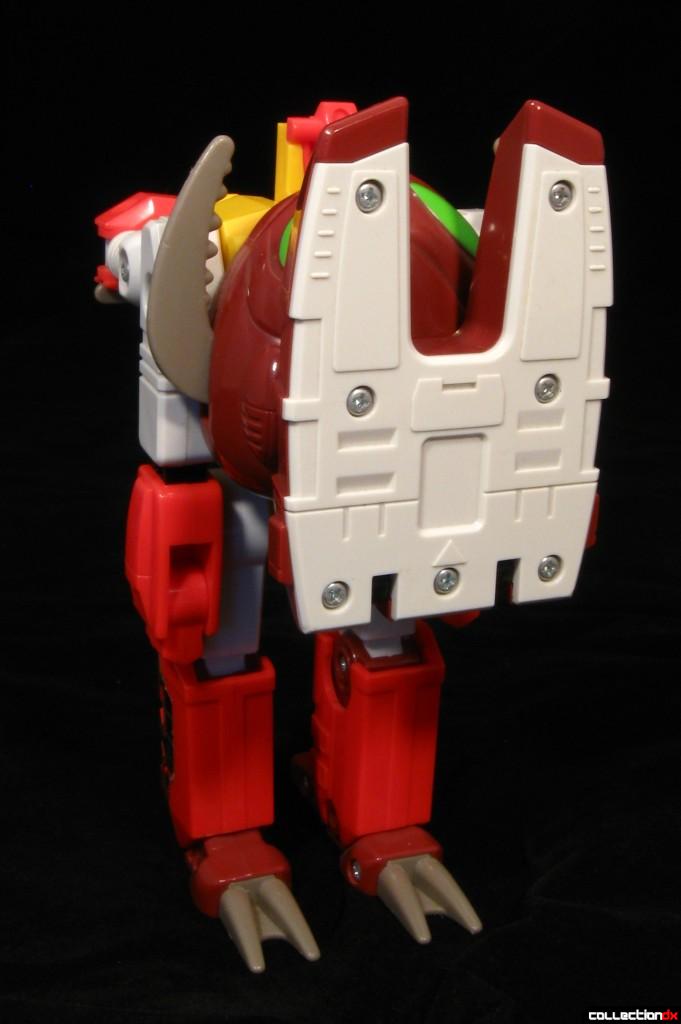 Not being one for subtly, Repugnus wears his alternate form out in the open. 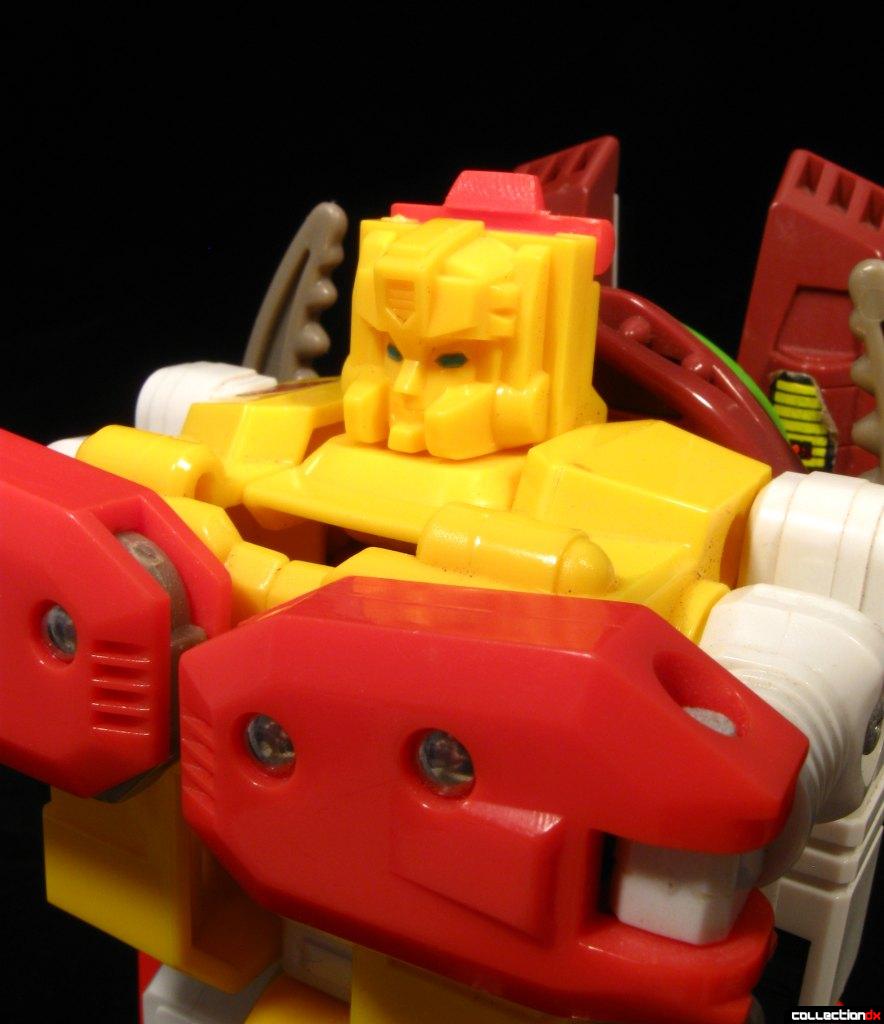 Everything from his overall colors to his face communicate that Repugnus is a good guy. His beady little blue eyes are almost lost in the sea of yellow that is his upper body. 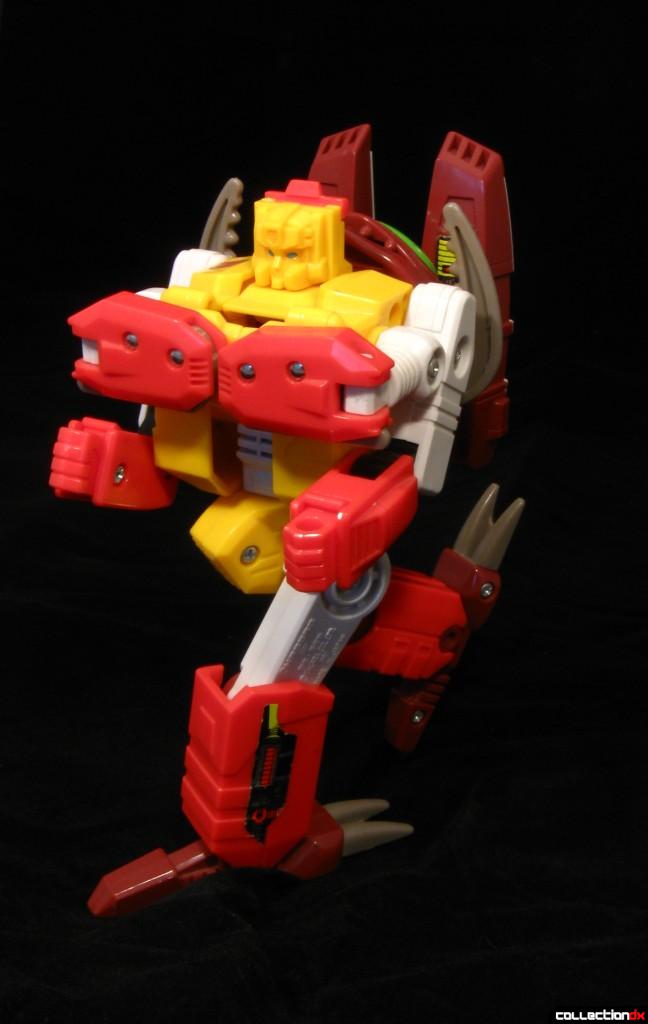 Because Repugnus transforms into what is essentially another humanoid robot, any spare complexity that would have gone to his transformation is in his numerous ratcheted joints. He's easily one of the most articulated Autobots of his era and features the rare waist-joint that doesn't break. 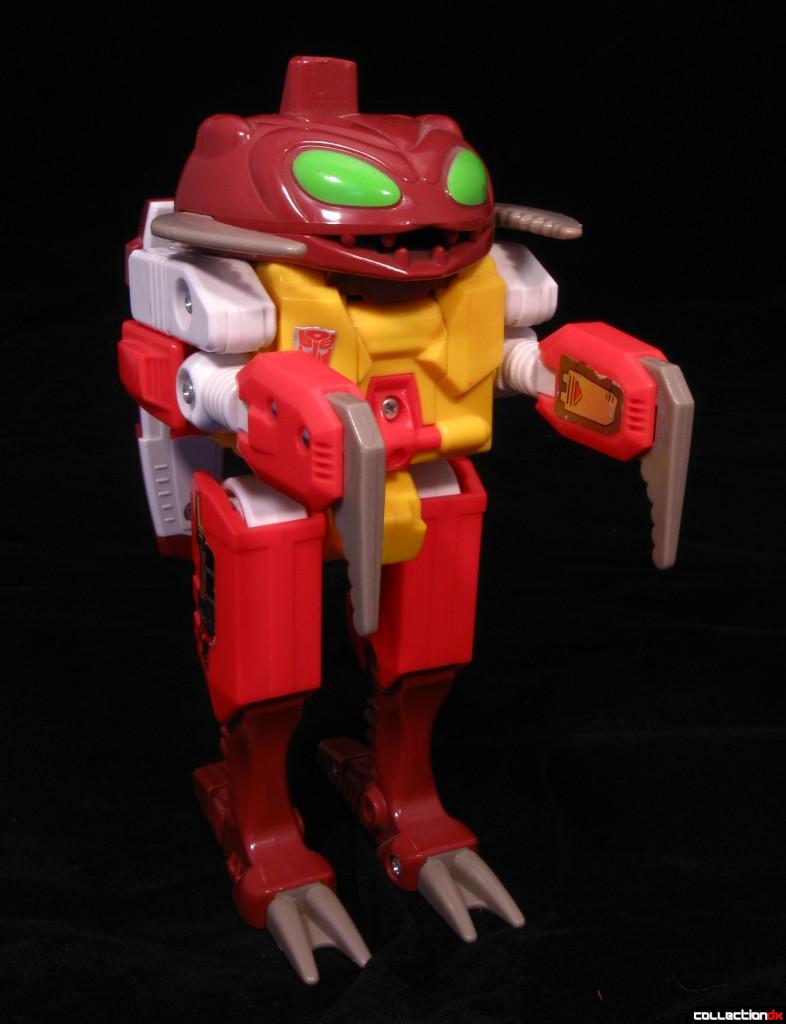 As one of the Monsterbots, Repugnus transforms into a robotic bug monster. His transformation is incredibly simply yet the toy's extensive use of ratchets still makes it satisfying. 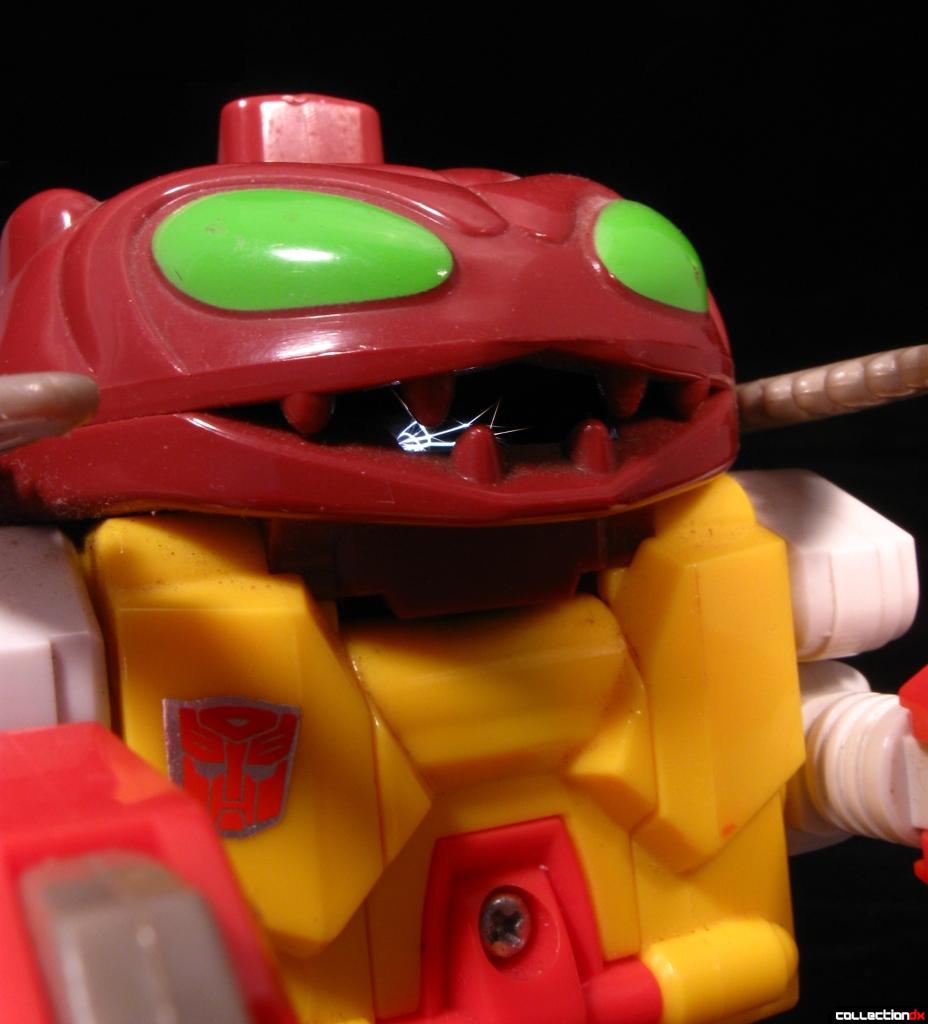 A button on the top of the bug-mode head allows Repugnus to shoot sparks. It also moves his mandibles in and out. 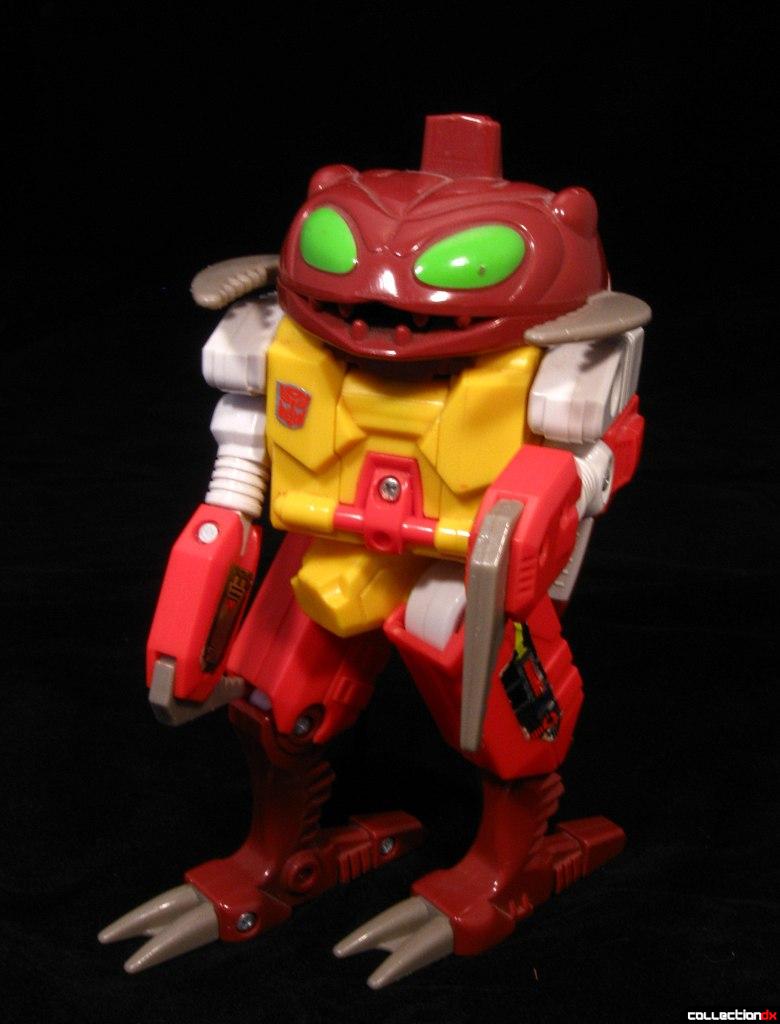 While Repugnus may be considered just another face in the small nation of Transformers, he is one of the more unique figures of his era. A total toy from start to finish. I rescued this guy from a plastic bin filled with with old Transformers in various states of disrepair. He was by far the most complete figure and only cost me twelve dollars. Repugnus is far from being the most remarkable toy, but he's still kind of neat.

Oh man, it's got sparks! That's something they need to bring back to transformers- and all toys in general.

You know I just read Maximum Dinobots like two days ago and these guys showed up. The first thing I thought was, "Oh god, why is that bug one so ugly yet adorable?!" I dig it though. I didn't realize they shot sparks. Neat!

Oh yeah, I know sparks are impossible to bring into the states at this point. :sigh:

But if I had a genie with 3 wishes, I would blow one wish on getting back sparker toys. :P

Oh boy. I loved this guy. Very articulated for it's era.

Ugly color and cheap (nonexistant) paint app, but I CANT WAIT to have one of these.