Thanks to Playmates for providing this figure.

Of course, the main focus of the upcoming Ninja Turtles film are the titular heroes in a half shell. Playmates has tons of toys planned to tie in with the movie and I'll be taking a look at everyone's favorite bad bo- er... turtle. Raphael is basically the Wolverine of the group. He's kind of a jerk (with a heart of gold) who tends to strike out on his own and wields a pair of three pronged weapons. Growing up, Raphael was definitely my favorite of the group so I was eager to check out his latest incarnation. 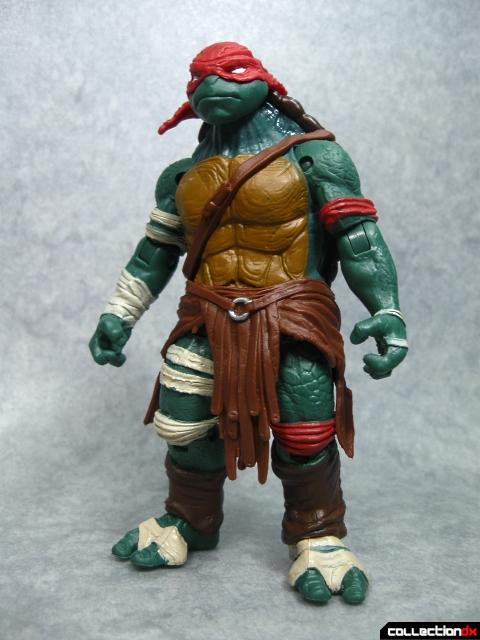 Raph stands an even five inches tall and is a solid chunk of amphibian warrior. Out of the movie redesigns he's probably the most traditional looking with his blood red mask and matching wraps around his limbs. The biggest deviation is the addition of a kilt that looks like Raphael stole it from the Kurgan. Raph is built like a bruiser and is definitely the heavy hitter of the team. 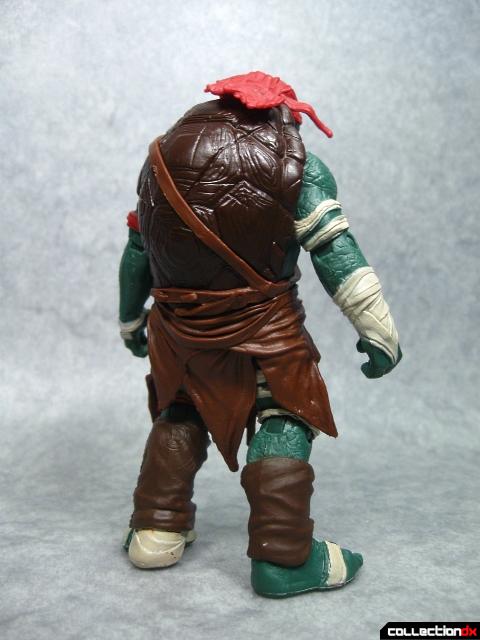 The detail and paint work is pretty good overall and Raphael feels like a much better toy than The Shredder. This is definitely something you could hand to a kid and they would have a hard time breaking it. 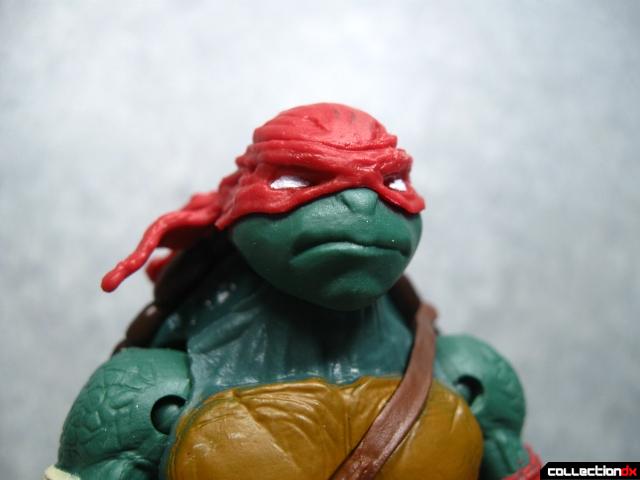 For those who have misgivings about the updated Turtles, Raph's design offers a good compromise for old school fans. I appreciate that these figures eschewed trying to give them real eyes and just went with the classic all white look. 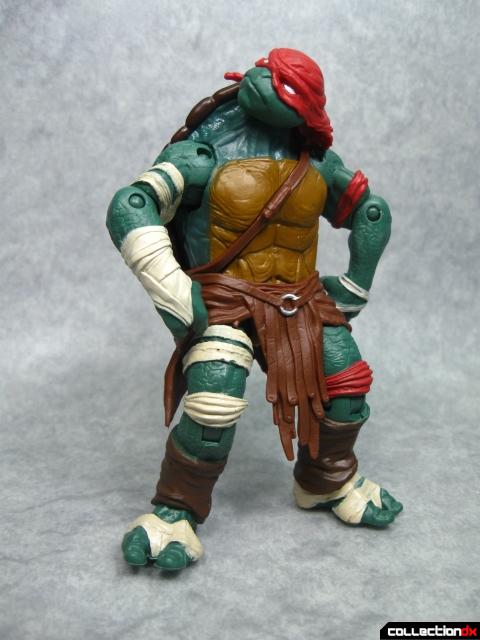 Articulation wise, Raphael is serviceable for a kid's toy. He has universal joints in his shoulders, elbows, hips, and knees which affords him a lot of personality despite his simplicity. Raph's neck can swivel left or right but it looks a bit odd due to how the joint is angled. Still he can look pretty cool (but rude) when posed the right way. 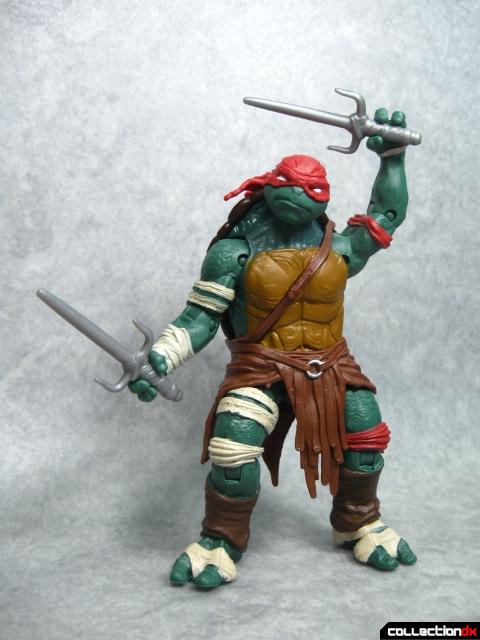 Raph's twin sai fit snugly into his three-fingered hands and look the part. I noticed the weapons in promo pics had additional paint apps but as a longtime collector I'm not surprised when the products varies from what's on the box. 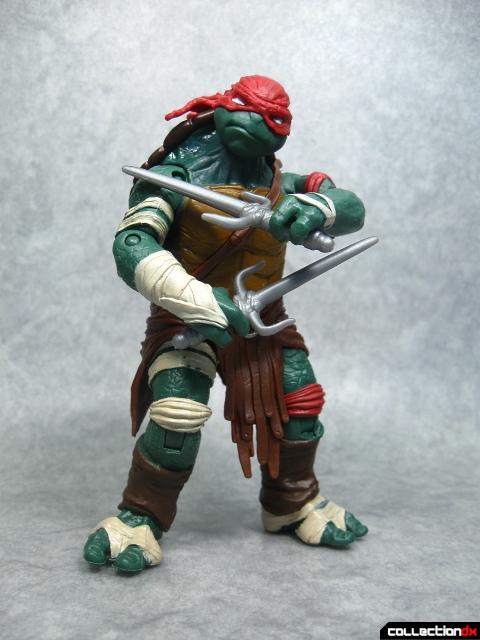 While he lacks wrist swivels, Raphael's free moving elbows let him assume a good fighting stance with his sai. 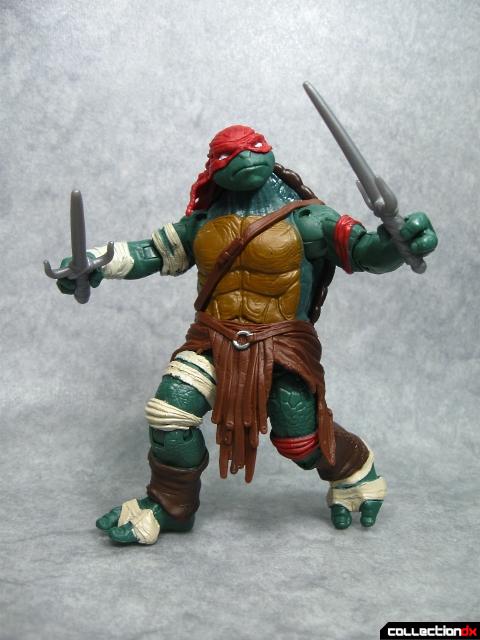 Unforunately Raphael's battle skirt limits his articulation below the waist. It's a shame since his hips appear to have a good range of motion but the kilt is just too tight around his legs. He has knee swivels so you can fake a few more poses with some fiddling and his big feet keep him upright at odd angles. 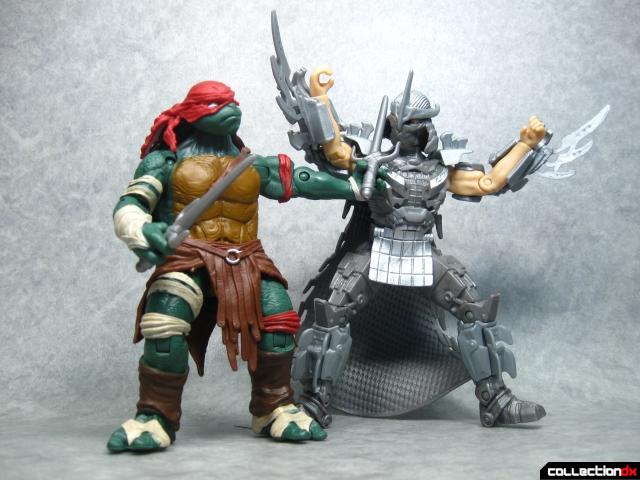 "Time to take you to the dump, Tin Man!"

Thanks to his training, Raph knows how to defeat an opponent with no wasted movement. 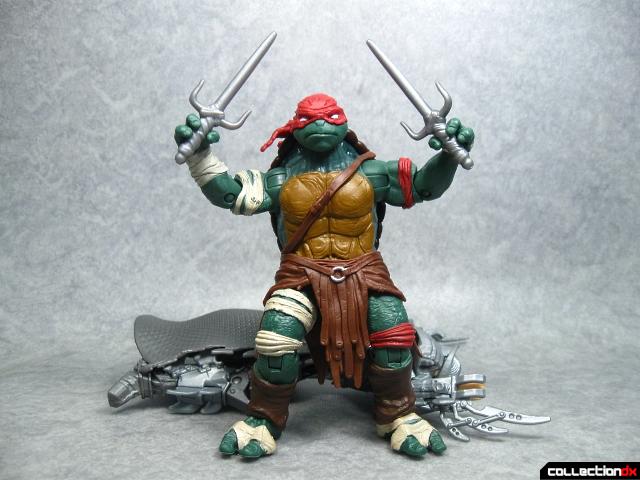 "Yeah that's right! I got some TURTLE POWER right here!" 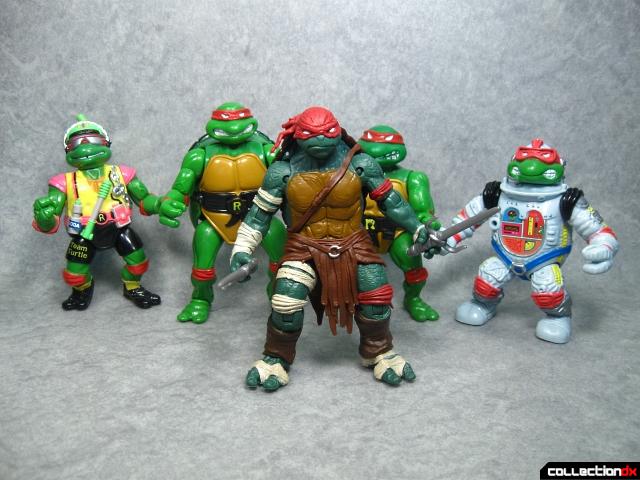 Did I mention Raphael was my favorite Ninja Turtle as a kid? I just couldn't get enough of "the red guy." 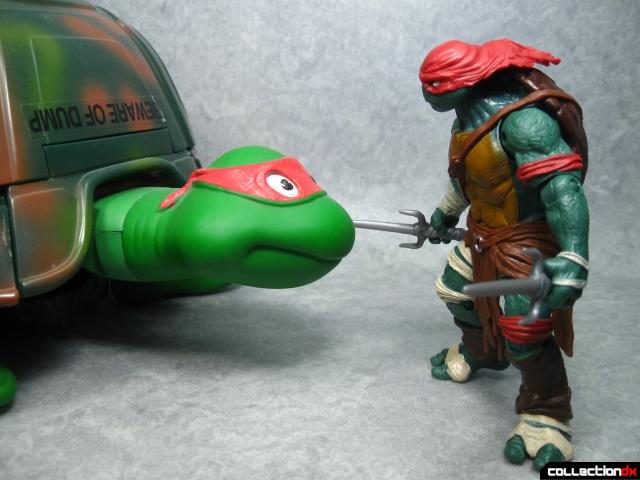 He can even hang out with the Muta-Carrier.

"Oh hey cousin Rutherford! Haven't seen you in a while. Just gettin' ready for another movie."

Out of the initial lineup of Ninja Turtles, I think Raphael is definitely a winner. While not the flashiest or most articulated of action figures, Raph's got a lot of presence and is fun mess around with. Despite being a modern toy, he's got an old school feel and has a bit of the chunky simplicity that made the original toys fun to bash around in the toy box. I honestly didn't know what to expect from this toy and was pleasantly surprised. In my next review I'm gonna mix things up and and look at... another Raph.

Thanks again Playmates for the sample figure.

Wal-Mart had a big cube display with all the new figures, so I checked them out. I'm a huge fan of the first movie and the original cartoon, but I didn't have a knee-jerk reaction to the latest designs. They don't speak to me, but I don't hate them. I'm glad you mentioned Raph being the bruiser. When you see the brothers next to each other, it's really clear, and that makes the design more appealing to me. They are differentiating them based on body type as well as personality. I thought Don looked painfully thin--which, while explaining his reliance on gadgets, also made him tough to look at. Heh!

The idea of a cube of turtles made me think of another sequel to that sci-fi movie series. Cube: Turtlecube.

Not big on the look of them in general, but I'll certainly get Raph to add to the 'ol Raph collection. He does look nice, I'll admit. Better than the others, at least.

Waiting on Revoltechs..... Haven't said that in a while.

Turtles are reptiles not amphibians GOSH.