This figure was provided by Playmates.

As the bad turtle loner of the team, Raphael has a tendency to go out on his own and mingle with the human population while looking for some bad guys to beat down. In the original 1990 film, we first meet Raph wearing a heavy overcoat and hat to disguise his amphibian form. The upcoming 2014 remake also features the red Ninja Turtle walking around with regular people as an homage to the original movie. As such we are getting a variation on Playmates's new Raphael toy right off the bat. 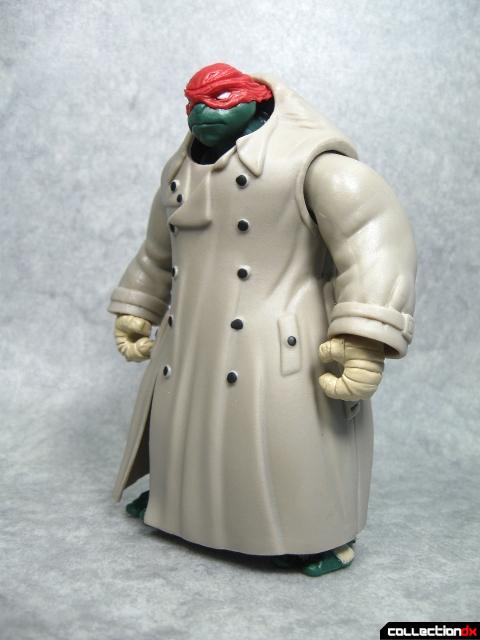 Raph in Disguise is essentially the same toy as regular Raphael just with a soft PVC overcoat and new arms. For the most part the outfit looks pretty good but he's got a bit of a hunchback because of how the coat had to be sculpted to fit over his flowing bandanna. 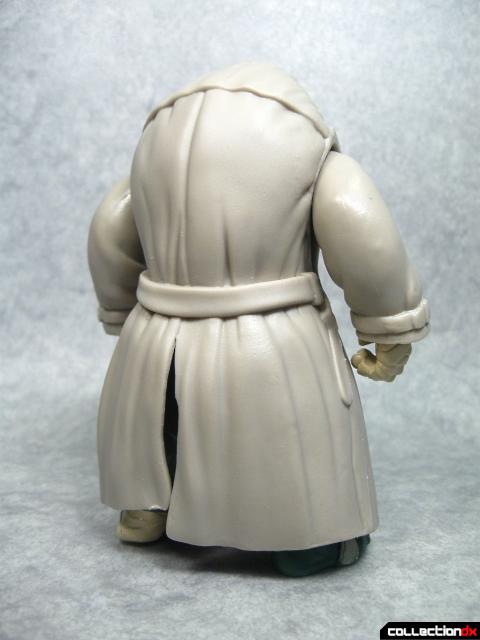 While all the little buttons on the front of the coat are picked out with paint, the molded on belt is left bare. Still the sculpt is quite nice and looks pretty authentic. The new arms have universal joints at the shoulder as their only points of articulation. 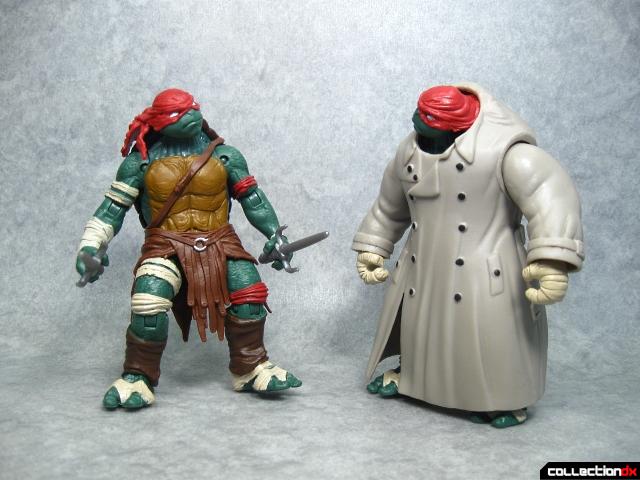 Here are the two Raphs in this line. You can tell he's the favored Ninja Turtle because he's already got two figures in the same wave. Oddly enough the disguised version isn't listed on the back of the packaging. 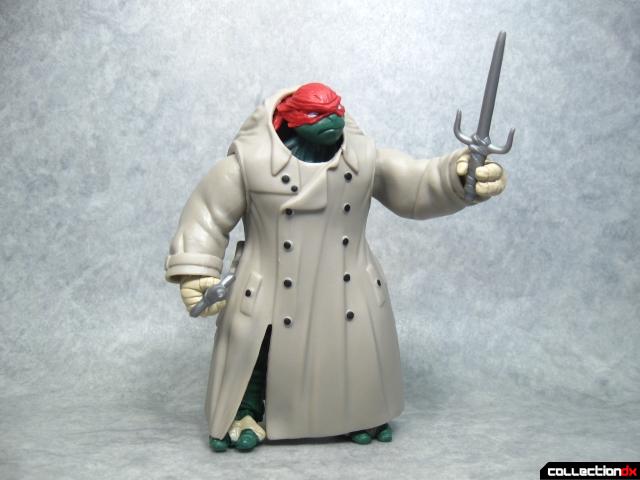 This Raph does not come with any weapons but he can wield one of the sai from the regular version in his left hand. The other hand is closed too tightly to grip the handles. 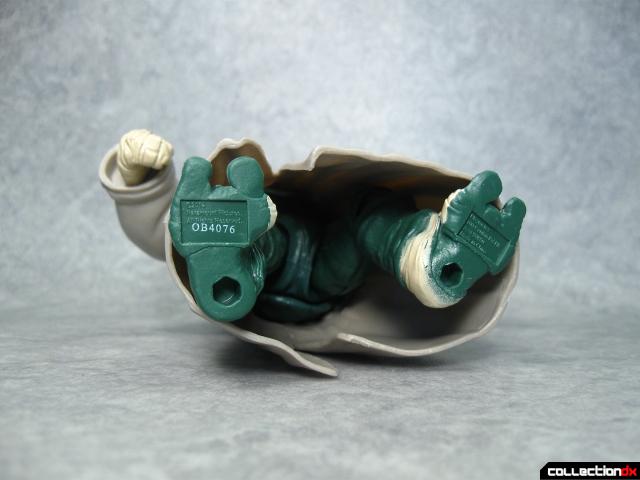 In this somewhat lewd upskirt shot, you can see how they basically put a new piece of clothing over the existing Raphael figure. While the coat is flexible, it is too restrictive to let the figure do anything other than stand straight up. Also most of the paint apps on his legs and shell are omitted because Raph's body is covered up by his disguise. 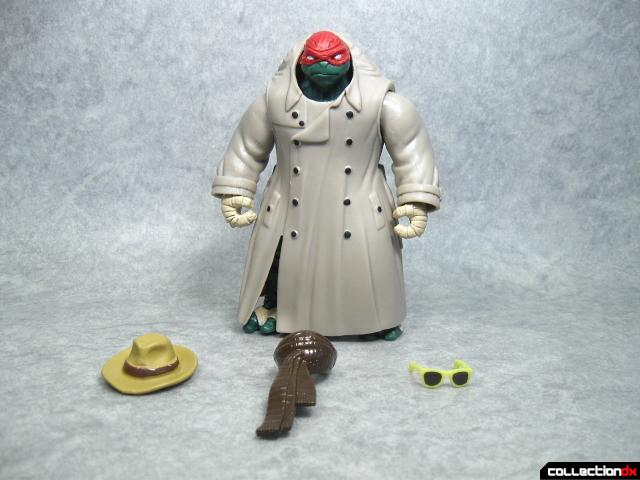 To make up for his lack of weaponry, Raph comes with a few extra pieces of clothing to complete his costume. You get a spiffy hat, some rocking shades, and the Fourth Doctor's scarf. 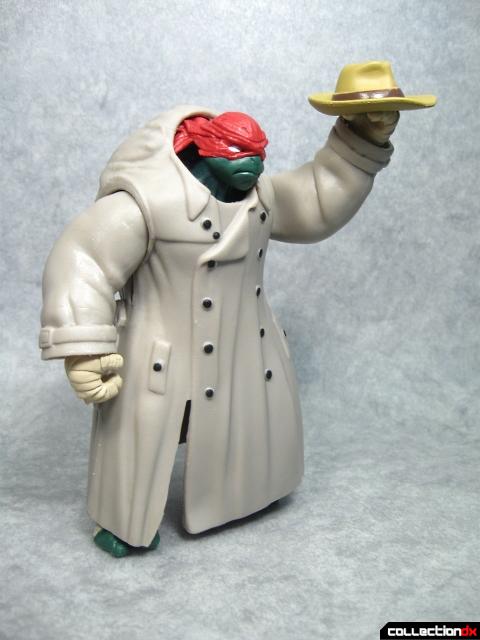 The hat is again a well sculpted bit of clothing that goes well with his coat. It fits snugly on his head so long as you push it down tightly onto his noggin. 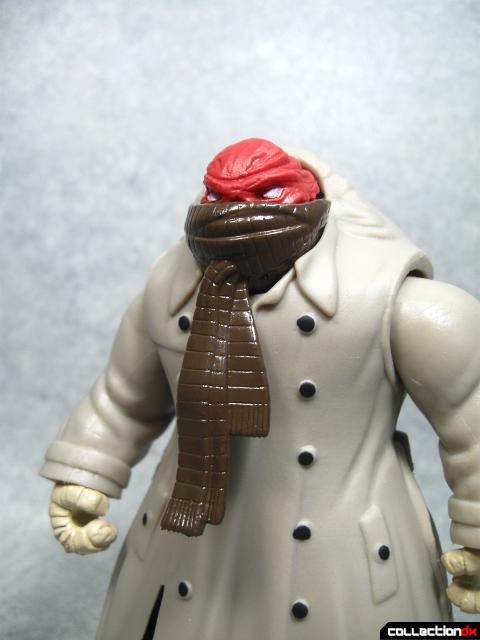 The scarf clips neatly around his neck as to hide Raphael's inhuman face from prying eyes. It also makes him look like a bohemian time traveler. 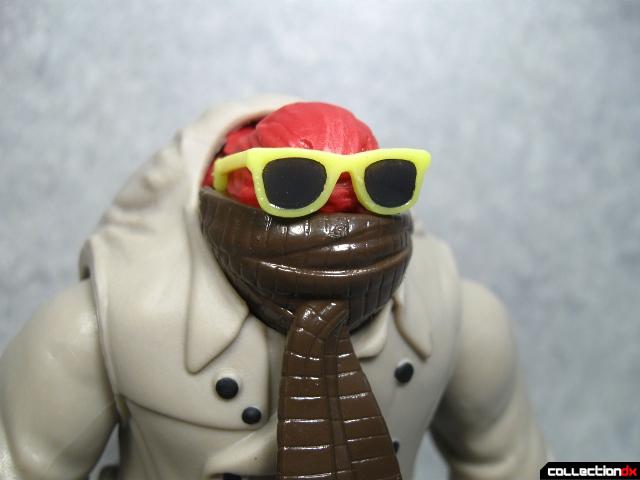 Rounding out Raph's ensemble are his radical sunglasses. These have a pair small tabs on the inside that fits into some cleverly hidden slots on his bandanna. The glasses themselves are hard plastic so be careful when handling them as they are thin and might get damaged with rough play. 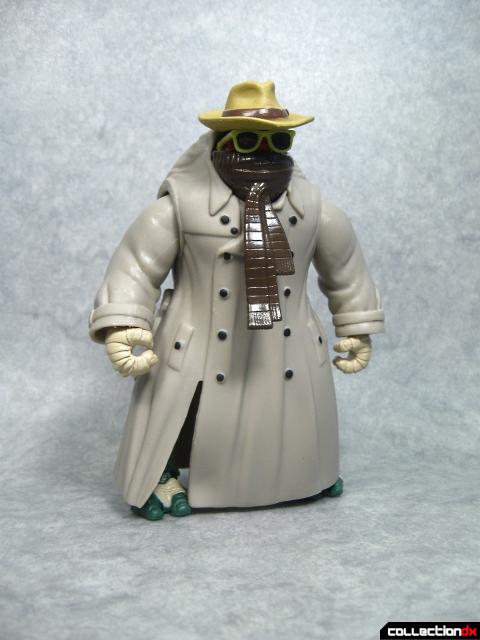 With his disguise completed, Raph looks completely inconspicuous and can now walk freely among the surface dwellers. 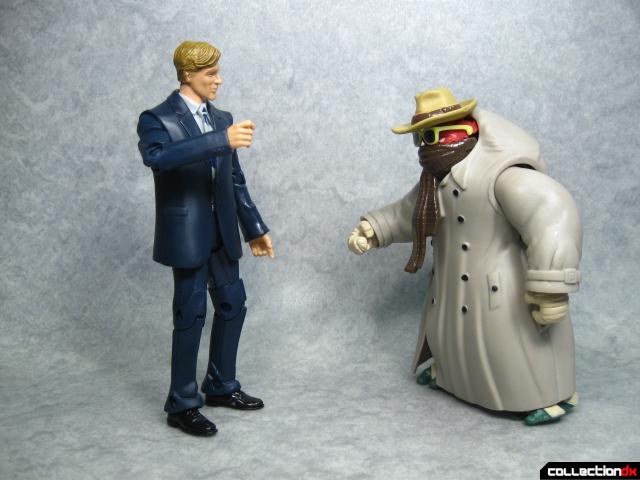 "Why hello there, fine citizen! Would you be interested in voting for a new district attorney in the next election?"

"Get lost cre-.... er I mean oh my goodness! I'm not really one for politics but I see you're a strapping young man with real get up and go!" 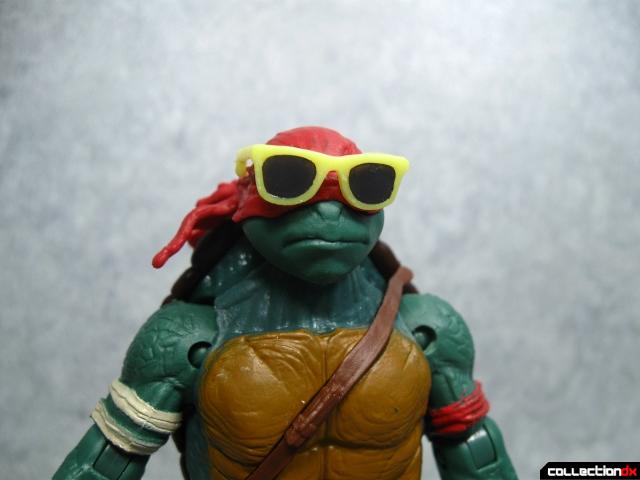 Because the two Raphaels share the same base body, the regular figure can also use the same accessories! 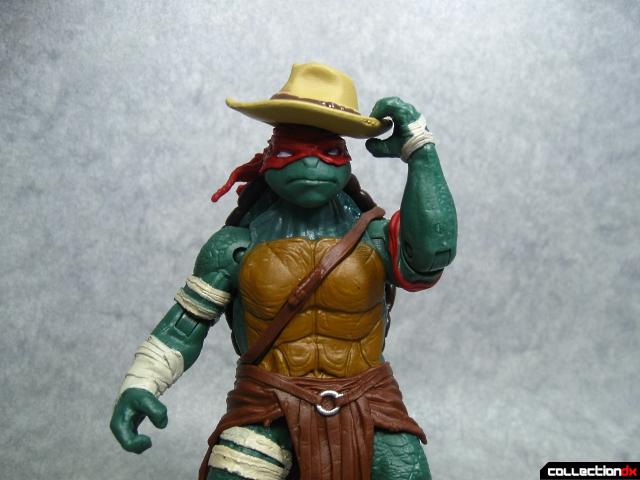 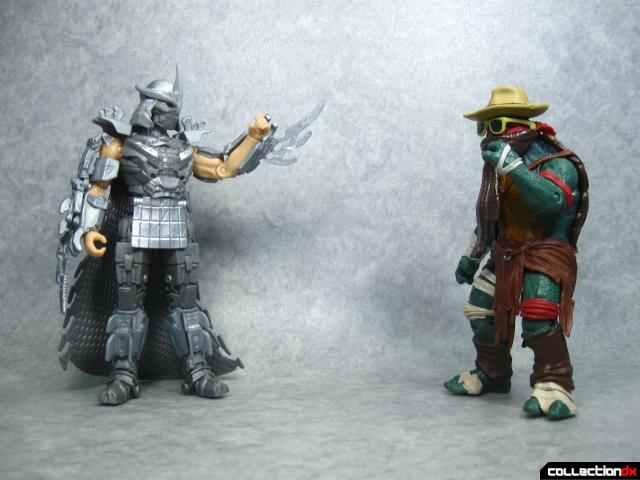 "Err um... Excuse me sir, have you seen a man-sized turtle running around? I know that probably sounds a bit bizarre but he's an escaped animal and needs to be "contained."

"Oh heavens no! I hope you catch him soon, he sounds quite dangerous! (Sheesh what a lameoid)" 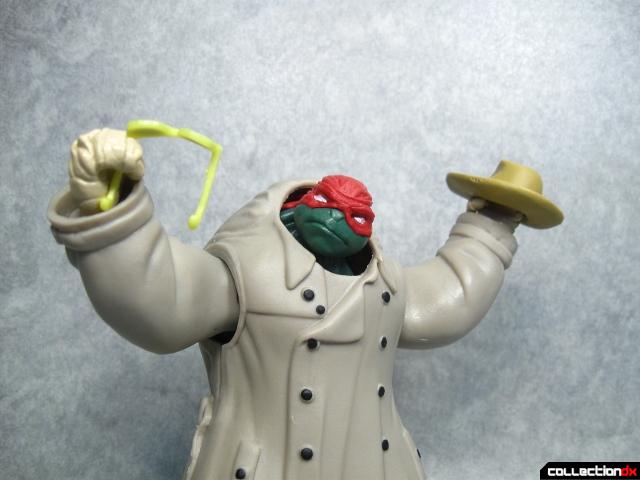 "You thought you were going to find Doctor Who but it was me, Raphael!"

Overall Raph in Disguise is a fun variation on the regular figure. While it doesn't do as much as the other Raphael, the singular gimmick is charming and goofy enough that it's a neat idea on its own. I definitely appreciate the the new movie is doing a great homage to the first film with Raph's penchant for human cosplay. 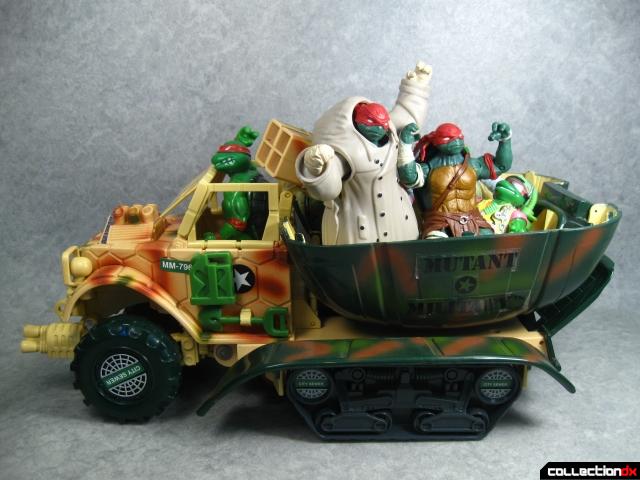 "ALL ABOARD THE RAPH-MOBILE! WOOO WOOOOO! COWABUNGA! RADICAL DUDES!"

And I always enjoy getting another Raphael for my collection...

Thanks again to Playmates for providing this sample figure.

The bandana under the hat gives him a cool "old western hero" vibe. The Turtle With No Name?

Because he looks like sort of a big turtle. In a trench coat.