If there was a character I related to most in Robotech when I was a kid it was Rand from The New Generation portion of Robotech. Also known as Rei in the original Genesis Climber Mospeada in Japan, I thought Rand was the coolest guy in all of Robotech. 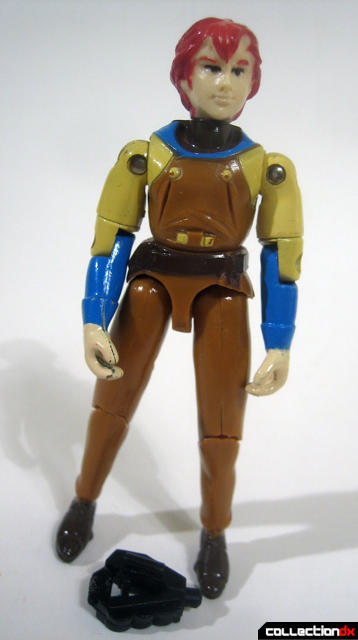 Rand was the smartest of the bunch yet he never exerted his smarts only when it was necessary. He had the beautiful tough-girl girlfriend Rook who rode motorcycles and he related well to kids with Annie. Although he followed Scott he was not a sheep and questioned his not so great orders from time to time. Rand thought big and figured out what the Invid were up to without anybody’s help but his own. Rand admired a good fight but would never actually want to join the military, as he preferred to be free with no obligations. And he loved pop music, especially Yellow Dancers music. 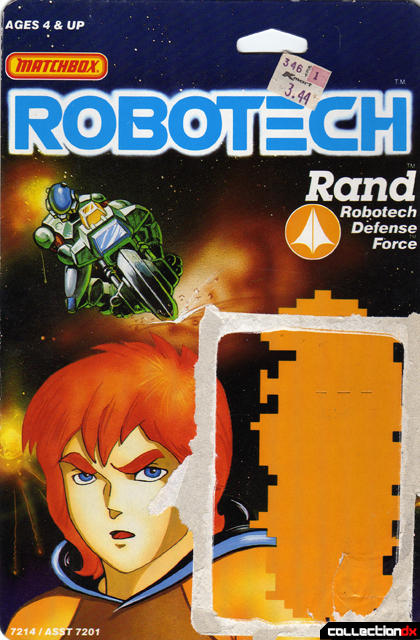 When Matchbox released their Robotech Defense Force line of 3 ¾ action figures, Rand was one of the 22 released figures and one of the more easier purchases in a line that had many rare figures. 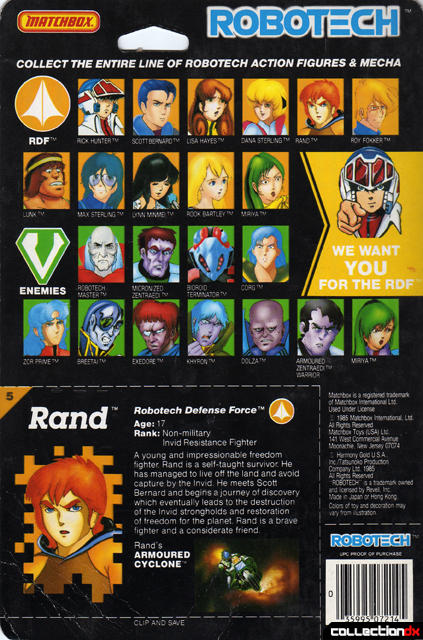 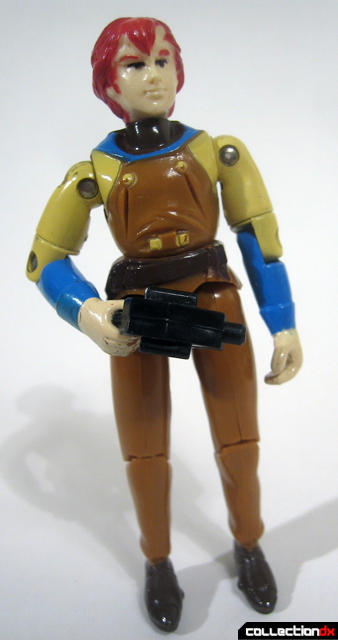 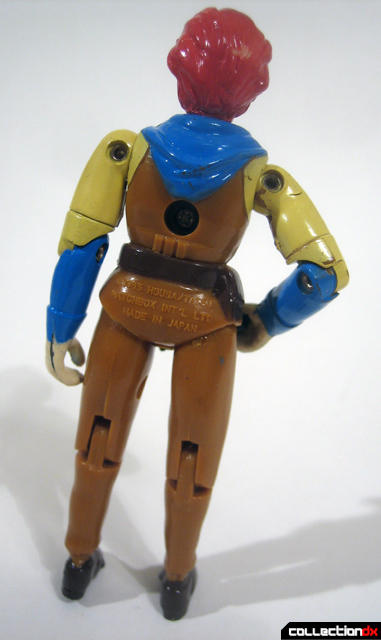 As sculpts go, Rand is neither exceptional great or exceptionally bad. They captured the character well as 1980’s toys go but it is not a stand out toy although I did like the figure as it was my favorite character in Robotech. For many years it was the only toy representation of Rand until the recent onslaught of Mospeada Rider toys that were released by CM and Beagle.

The gun sculpt is nice, with Matchbox capturing the minute details of the pistol quite well. Once again I applaud Matchbox for including anime accurate weapons with these Robotech figures. 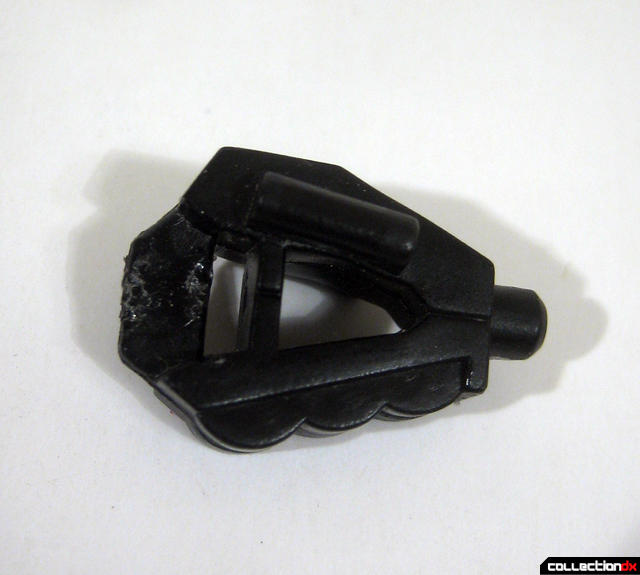 A Matchbox variation of this figure is that early versions of Rand came with an open shirt flesh colored neck and the later version had a dark brown shirt covered neck. There were also some other minor paint application variations on the jacket as well. I am sure both versions are quite common as it is a fairly easy figure to locate. 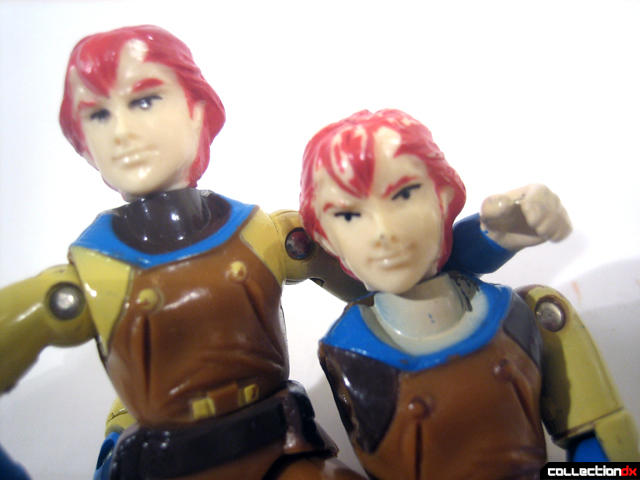 What was another of Matchbox’s many let downs with their Robotech The New Generation releases was it had some of the hardest figures of the line to locate. Although Rand was very easy to locate, Rook and Lunk were the most difficult figures to locate in the 1980s and even today are the most premium of the Robotech Defense Force line to purchase. The Scott Bernard figure was also very difficult to locate, as I believe the figure was only released regionally, myself never seeing any in the stores back in the 1980s here on the West Coast. With Annie and Yellow Dancer not being produced it resulted with Rand driving around on his Cyclone looking for the others in the group, fighting the Red Invid and Corg action figures I also owned. 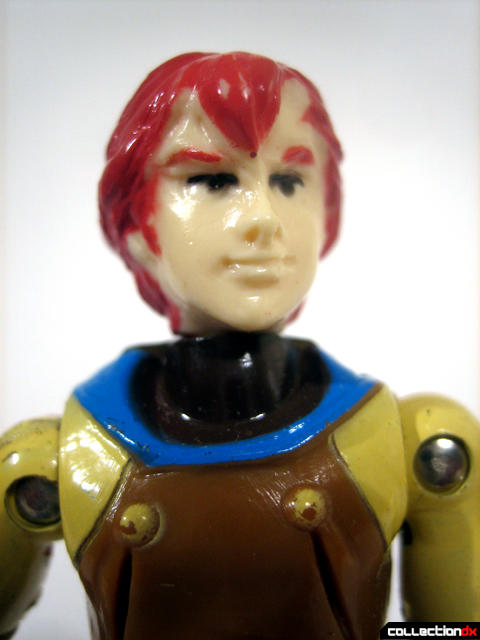 Rand is still an easy to locate Matchbox Robotech Defense Force figure, which is only disappointing for the fact Matchbox made it extremely difficult to locate the other figures of Scott Bernard’s group of freedom fighters. Otherwise it was a lonely trip for Rand back in the 1980s.

©2010 Article and Pictures by Leonardo Flores and CollectionDX.

wait...these figures were made in Japan? I never ever knew that. I assumed they were from Taiwan or China. Interesting. I feel like digging around for mine. I have Dana Sterling and a bunch of other figures..oh and a battle pod which is AWESOME somewheres. I dig your reviews on these. Although these figures look weird to me even as a kid, I still would ask my mom to get them for me, they never broke on me and I still have em to this day, I just have to find em.

Yes, although I really don't see the craftsmanship, the first release of these figures were made in Japan.I would like to know which company produced these in Japan (perhaps Bandai?) as Matchbox wasn't known to have manufacturing facilities in Japan so they must have used an already established manufactures facilities to produce their product. Just what we need more mystery with these toys! they later were made in Hong Kong and China.

These figures are funky, with 1/3 of the figures very well done, another 1/3 questionable and the last 1/3 the worst toys ever injected into plastic. In the gallery you can check out all my Matchbox Robotech toys and if you have something you don't see in there by all means review it! It would be great if we could review all these Matchbox Robotech toys.