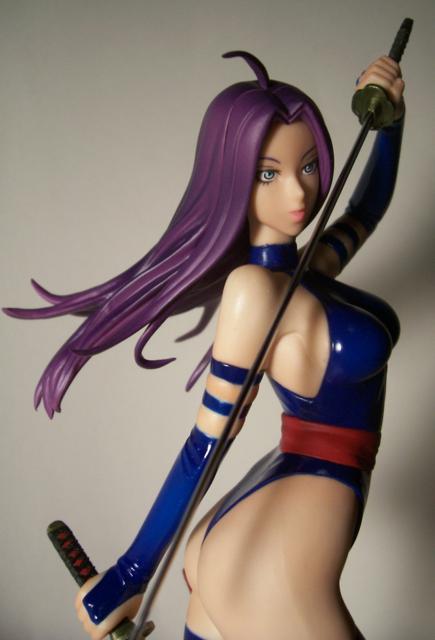 Character BackgroundPsylocke is Elizabeth “Betsy” Braddock a British telepathic mutant whose mind was transferred into the body of a top-rate martial artist working for the Hand, a cult of Japanese ninjas. Long story short, Psylocke is a top rate martial artist/ninja with telepathic/telekinetic powers. Psylocke is part of the X-Men franchise, although she is known to occur pretty widely throughout the Marvel Universe. Below..the cover from the recent Psylocke #1 mini series by artist David Finch. 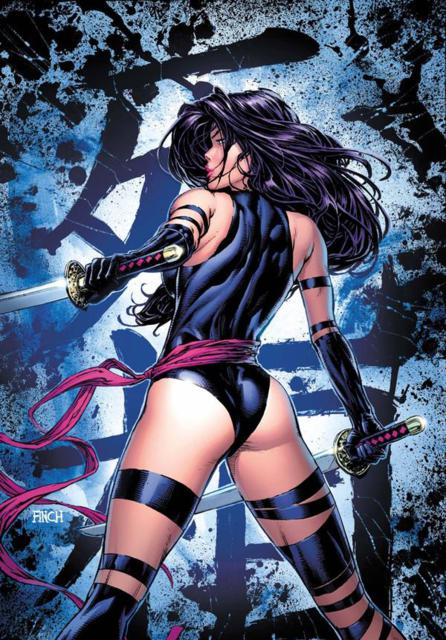 Following her introduction in the 1990s, Psylocke rapidly became a fan favorite, especially after popular X-Men artists such as Marc Silvestri and Jim Lee accentuated her “look” for the 1990s “pretty girl” comics fad. Although a great many of the female characters at Marvel (and especially the X-Men) are known for their sex appeal Psylocke generally ranks pretty high among the top picks.
The Kotobukiya Bishoujo statue line presents female Marvel characters as rendered by Japanese illustrator/game designer Shunya Yamashita, who is famous for his beautiful female characters.

Psylocke is the 4th in the line, following Rogue, Black Widow, and the Scarlet Witch.

Review
Some basics-there is, of course, a four-color window box 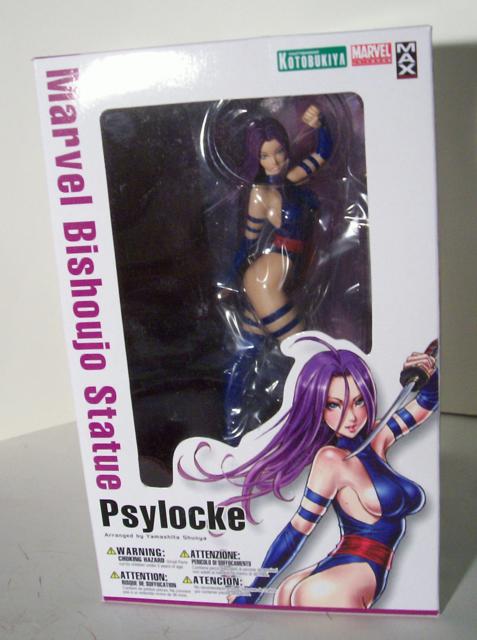 with some nice art of the character. 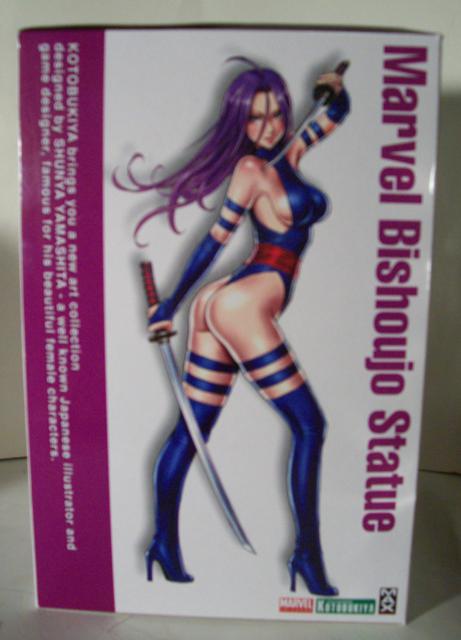 The plastic blister that shows the two swords and stand. 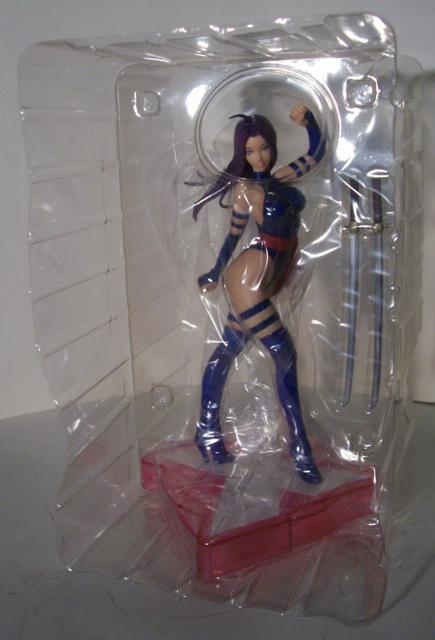 The overall sculpt stresses a “real” rather then “anime” look. So the proportions are generally more like a human being (no weird neck and eyes as the early Ame Comi statues had). 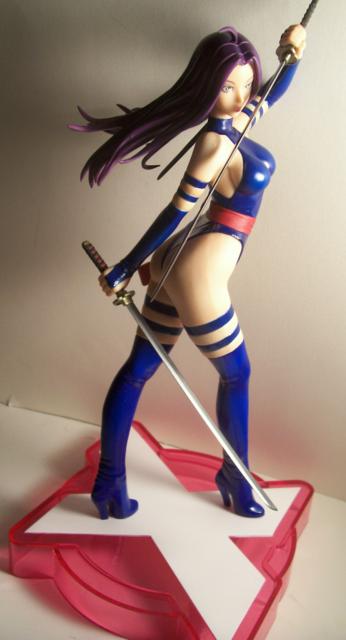 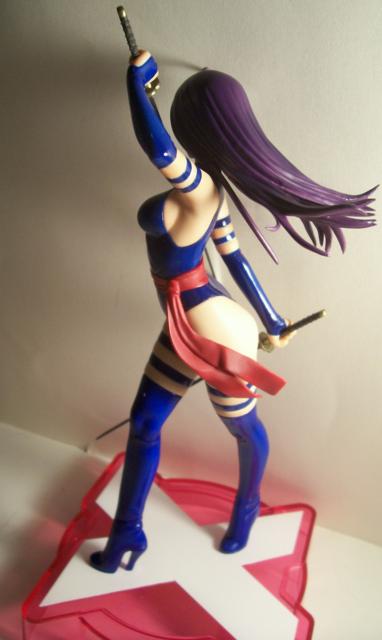 There are some good details..such as her sash. 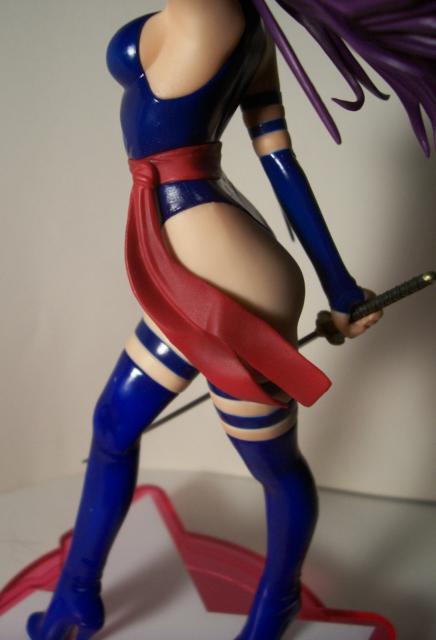 The figure is a statue, so no posability and because this is one of the mainstream X-Men characters, no cast-offs or pseudo-cast offs. That being said, the figure takes after the comic book costume design, so she’s wearing a thong and we’re basically seeing her exposed buttocks 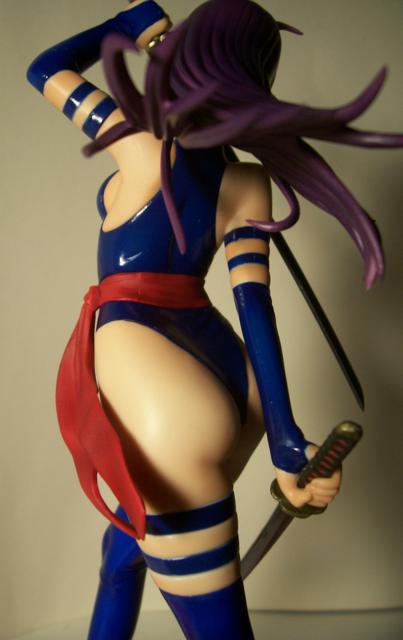 Facial expression on the character is okay. Compared to the art on the box, I think she’s supposed to look a bit more menacing, but the eyes aren’t quite there. The mouth is also kinda “just there”.

Color is good-with no bleeding of paint between boundaries.

The overall pose captures the personality of the character very well with the swords posed to show off her curves.

Breasts are good but with no real detail or added tease 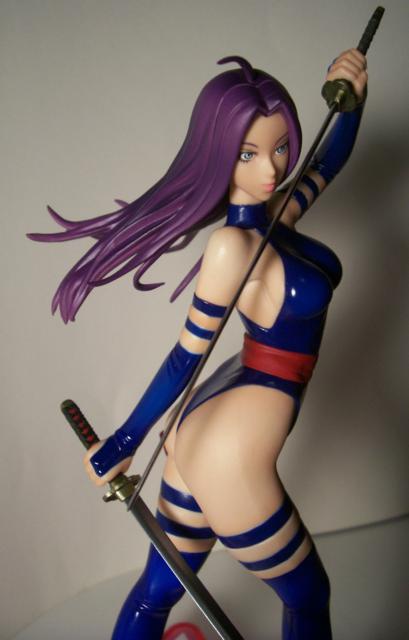 Although there is side boob…

The overall style of the statue's look is more “beauty of pose” and less “nipples in air conditioning”. 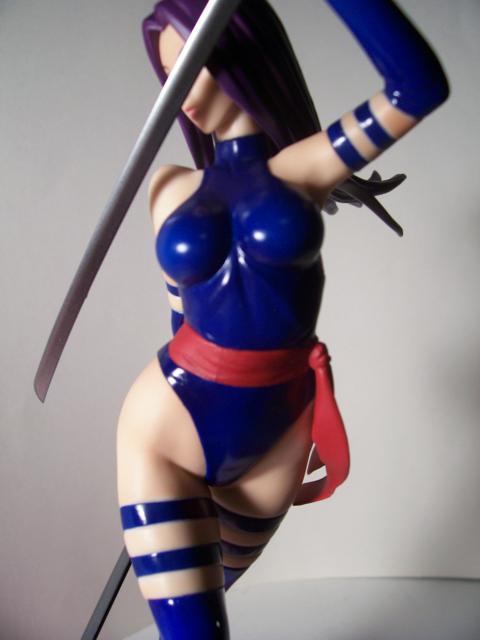 One word of caution, the swords come separately and are meant to be slipped into Psylocke’s hands in one piece for each hand. A common gimmick in girl statues is for the weapon, in this case the sword handle, to come apart so that they can be easily slipped into the hole created in the fist. This is not the case here and you can accidentally break the blade from the handle. Fortunately-they articulate pretty well and reassemble easily. 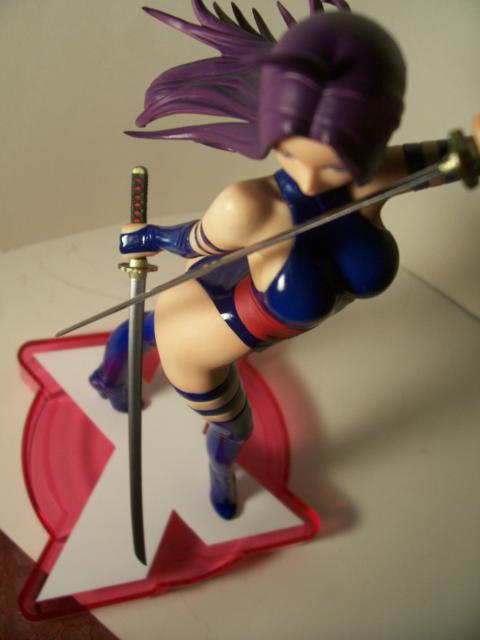 I am a bit confused as to the placement of the swords though. From the pose on the box, the sword looks to be just low enough that regardless of the angle, we should be able to see Psylocke’s face.From the side angle (suggested on the box) you get a great projection of the character. 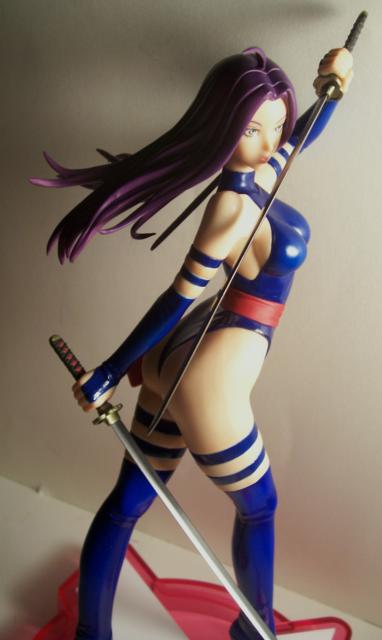 But, tilted a bit more to the side, the sword blocks the face where the box suggests the sword should be below it. 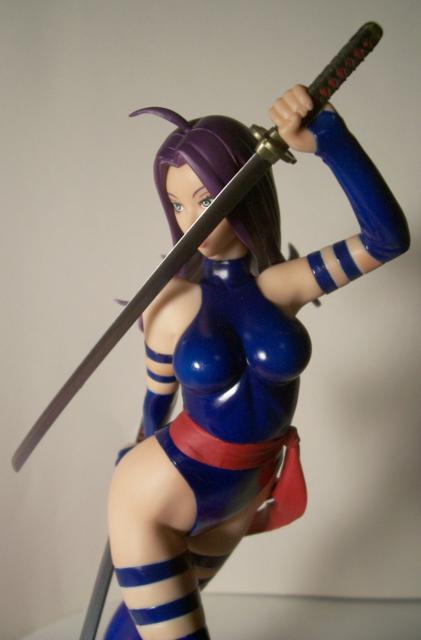 A minor complaint, I suppose…but the statue looks awkward from the front. 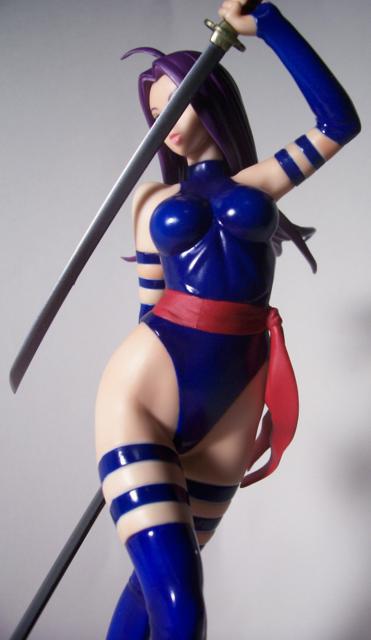 The character is pretty well-supported by the very appropriate “X” stand. 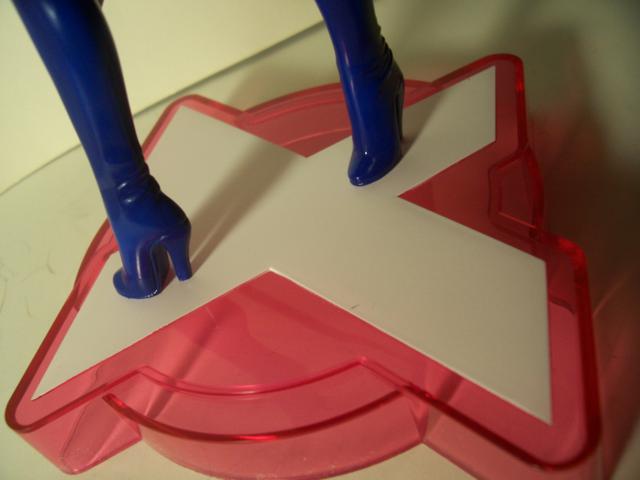 Overall After so many of the Ame-Comi statues, which are based on DC characters, reviewing one of the Marvel characters is proving to be an interesting change of pace.

I’ve really been enjoying the Bishoujo statue line and are intended to be (and I think are successful as) a competitive rival to DC Direct's Ame-Comi statues. They look less awkward (although the Ame Comi statues have improved lately) and are essentially direct representations rather then “anime reimagining” of known characters.

General differences? Every time I talk to someone, who sees one of these for the first time, their reaction is always “hm.. I thought it would be bigger” and indeed the Marvel Bishoujo statues are smaller (1/8 scale, about 7 4/5 inches tall) versus the Ame-Comi statues, which are 1/7 scale (height closer to 8.5 inches tall).

I wonder though, would a larger 1/6 scale be better for the line?

Bishoujo Psylocke has a simple but effective sculpt. The statue doesn't have some of the painstaking detail that some other girl statues have and yet in spite of the lack of all the various tease elements (nipples, etc.) this and all of the Bishoujo line are successful entries into the "pretty girl" statue genre.

These statues have a different strategy from the Ame-Comi statue line but sculpts of the characters have been more effective overall. Where some of the early Ame-Comi statues have had both success and train wrecks (Harley for the former, Zatanna comes to mind for the latter)-Bishoujo has, so far, been more conservative but (IMHO) has had more creatively successful entries into the statue arena.