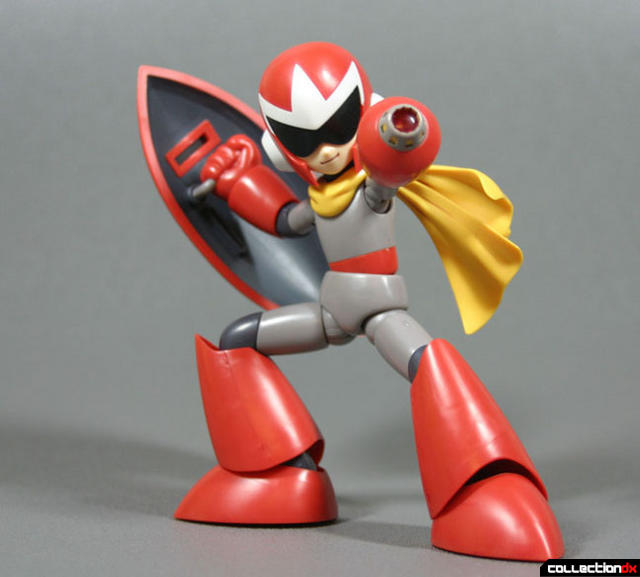 If you are from Japan, then you know him as Blues, but to the rest of us not from the Land of Gundam and Godzilla, his name is Proto Man.

Proto Man made his debut in Mega Man 3, one of my all time favorites in the Blue Bomber’s adventures from the original Nintendo Entertainment System. As the first humanoid robot developed by Dr. Light, he is the older brother to the series’ leading little blue robot who was corrupted by the evil Dr. Wily.
Players would encounter Proto Man at the sound of his trademark whistle as the shield wielding “Break Man” during certain stages of the game. As his name would imply, the break in the game challenged players against another Mega Man type robot until eventually Proto Man’s true nature of a good robot would come to aid Mega Man in defeating Dr. Wily on numerous occasions. In the short lived American cartoon series from the 1990s, Proto Man remained an evil Robot Master under the command of Dr. Wily and was voiced by Scott McNeil. 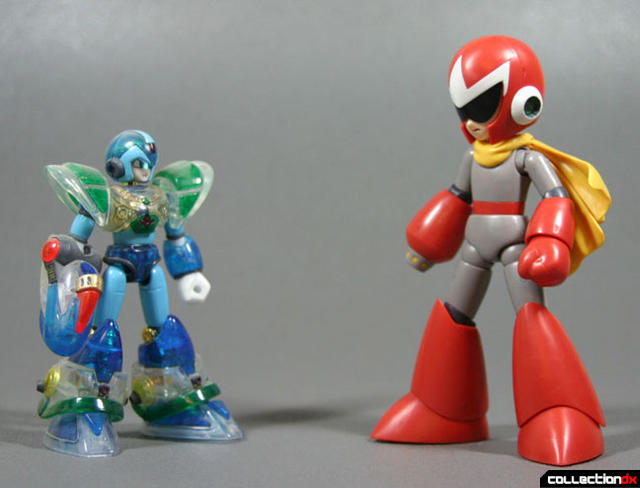 The license for Mega Man has been handed off to different toy developers over the years. While under the Bandai banner, Mega Man saw a line of action figure model kits that featured gimmicks such as Plasma Busters that fired ball-bearings or pre-assembled skeletons with interchangeable snap-on armor (from the Mega Man X series). While rare and increasingly expensive, these kits are actually a lot of fun if you can find them. 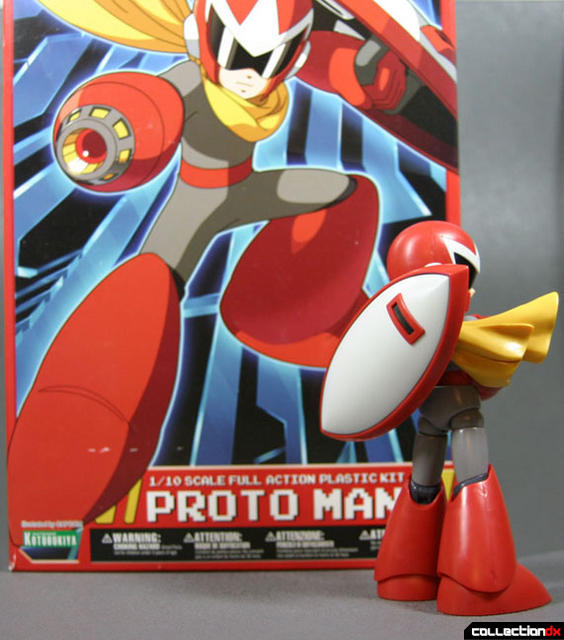 Since the earlier models have faded into rare obscurity, a new generation of Mega Man model kits is being produced by Kotobukiya starting with the original series. Proto Man marks the third release following Dr. Light’s dynamic robot duo of Rock (that’s Mega Man’s name for when he’s not kicking bot) and Roll (his housekeeping little sister). 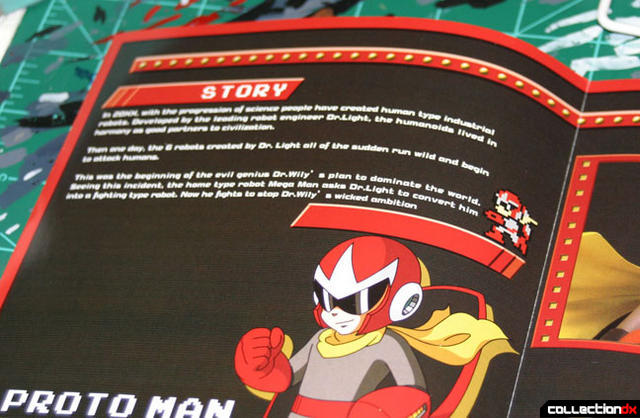 What surprised me is the model’s box and manual are translated into English, making this one of Kotobukiya’s Domestic releases. 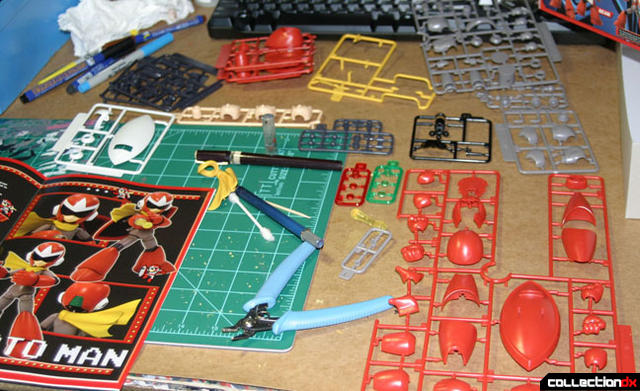 Out of the box, Proto Man is comprised of 16 runners, counting its duplicate trees and polycap runners. The model also comes with a pre-cut “Effect Part” of discharged plasma for Proto Man’s Buster arm. 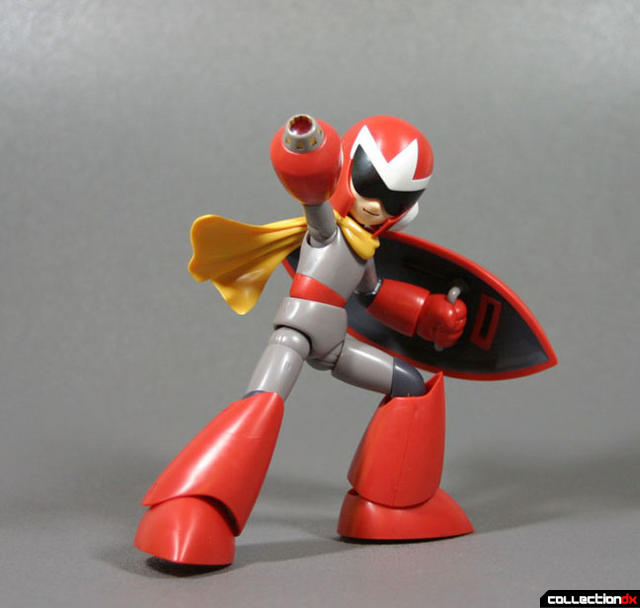 The parts are molded in full color of red, gray, yellow, and dark gray with the small tree for Proto Man’s face molded in a skin tone. There are two identical runners of clear pieces for the jewel inserts for the rings on the side of Proto Man’s helmet and barrel of his Buster arm. 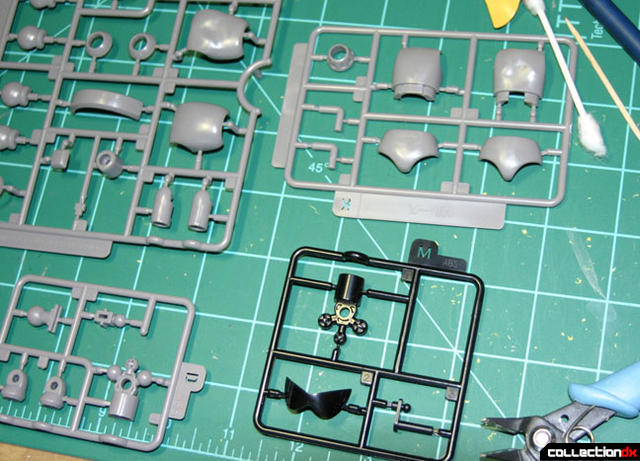 Proto Man recycles most of the parts from the previous Mega Man model kit but comes with an extra set of parts runners that replace the torso, head, and his iconic shield. The new parts for Proto Man include a new ‘spine’ which is the central piece to the torso assembly that is larger than the one released for the original Mega Man model.

Contrary to just about everything else Kotobukiya has produced, this new Mega Man series is easy to build which makes it more accessible for younger fans of the game. Building Proto Man takes no time at all if you are working right out of the box, but if you take your time and do an extra effort of detailing, the work can be done in only a couple of hours. 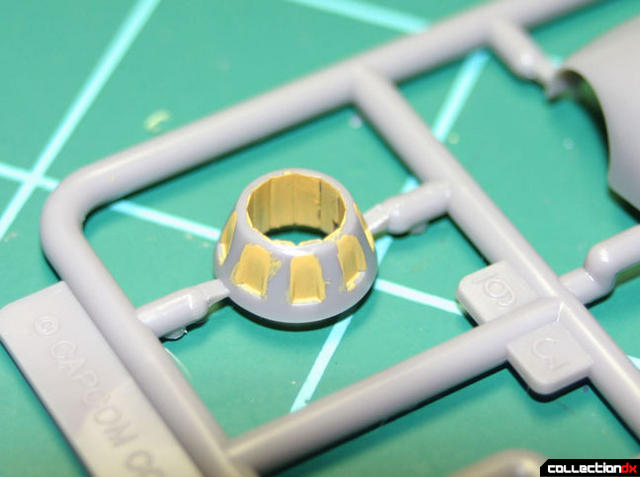 Thanks to its plastic colors, Proto Man required very little paint but still it never hurts to apply some. For this kit I used Testors Acryl colors which bond well to unprimed plastic and take very little time to dry. 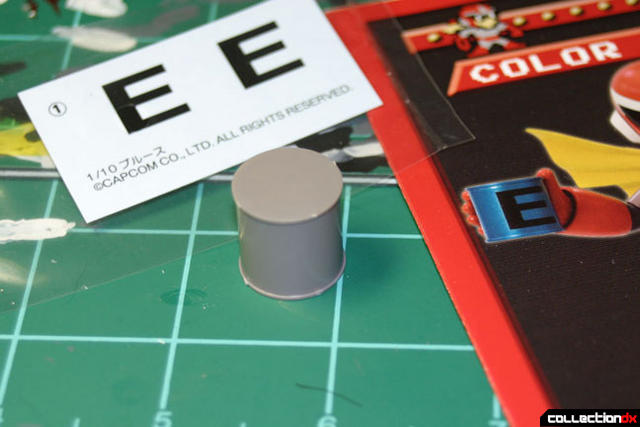 Paint will also help to bond the wet transfer decal to Proto Man’s Energy Tank, which was the only part that required the most time in painting to look accurate to the description. For this I used a base coat of silver enamel and came back a few hours later with a blue metallic color.

Proto Man can also benefit from a little time with detailing via Gundam Markers. I used a GM-03 (Brown) to fill in his lips and used the same marker for detailing the folds in his scarf (with some clean-up using a cotton swab and a Gundam Marker Eraser pen).

Before I go into what was great about the kit, I need to talk about something that I found wrong. The plastic quality of Kotobukiya kits has always been one of the downsides to their work, and I expected to find something in this kit. There were some instances of imprecise cuts on my part which resulted in some minor scarring, but I was able to clean these areas up with a brief sanding and buffing.

The one case of Plastic V. Builder came from the peg space for the two part axle where the hips attach to the waist. Made from ABS plastic, the parts were too thick and needed to be filed down so that they could slide together properly.

In retrospect, this was much easier to deal with than my experience with the Takemikaduchi. 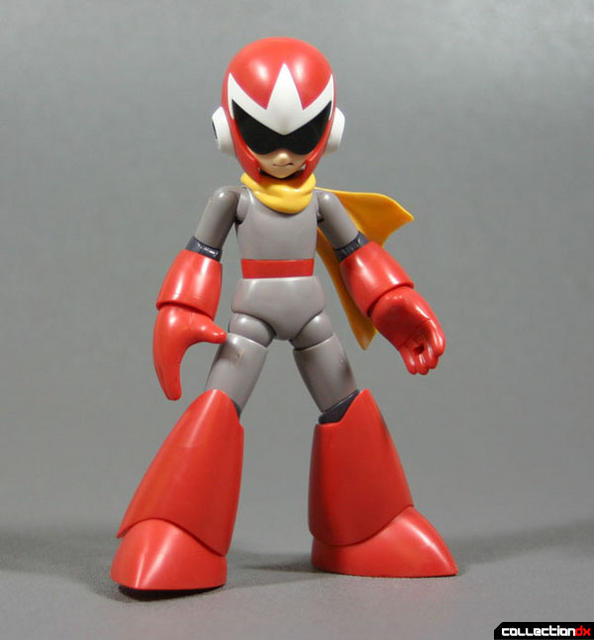 Fully built, Proto Man stands at 5 inches tall and feels like a well built action figure rather than a model kit, capturing the look of Proto Man’s original character design.

Thanks to its joint design of ball sockets and hinges, Proto Man is exceptionally articulated from head to toe and can take on a variety of different poses. The elbows and knees have a great range of flexibility and rotation, but the forearms tend to come off if you over flex the elbows. 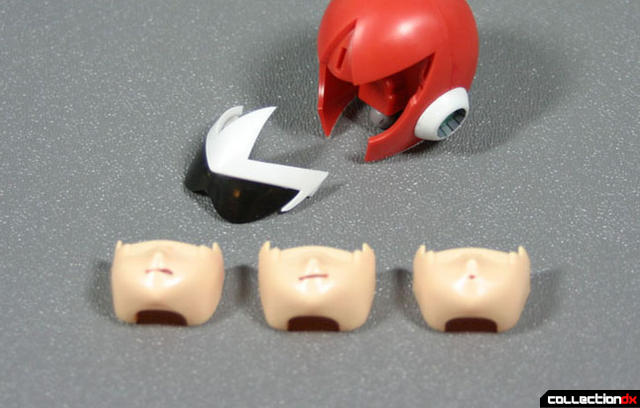 Since the Robots of the year 20XX are not emotionless husks; Proto Man’s head comes with three interchangeable faces. His normal, angry, and smiling expressions can be swapped after removing the visor and gives the model more character. 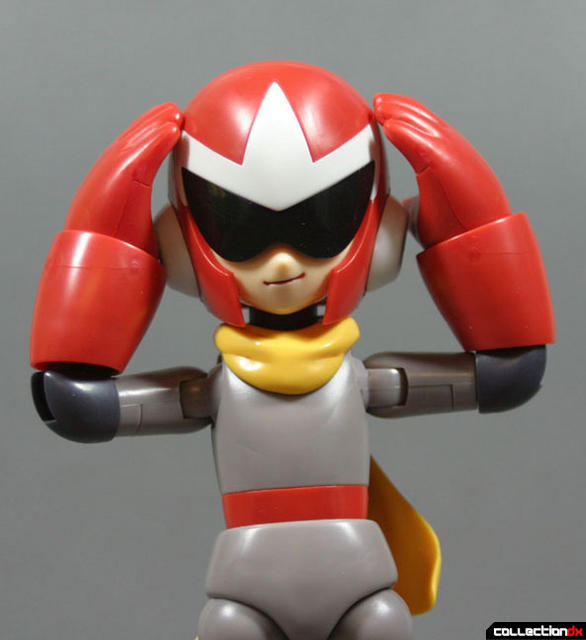 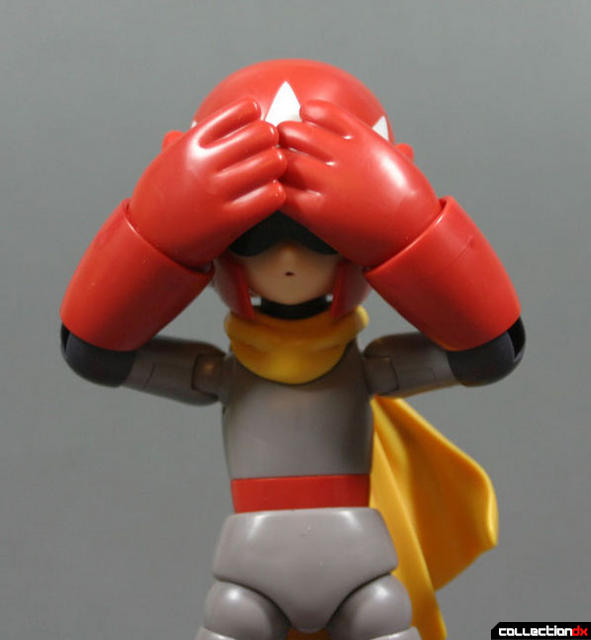 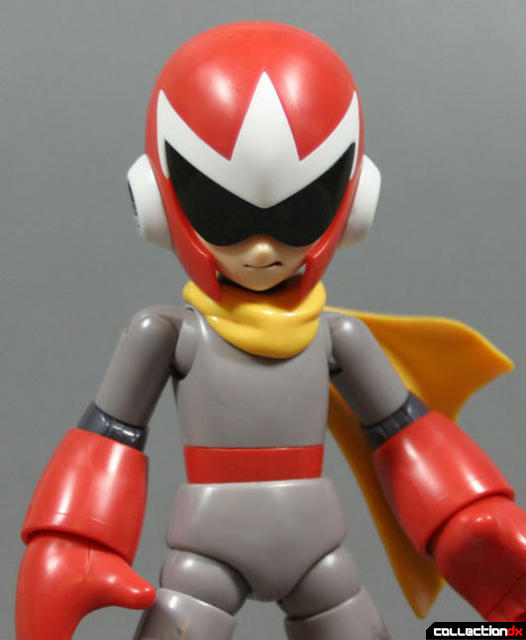 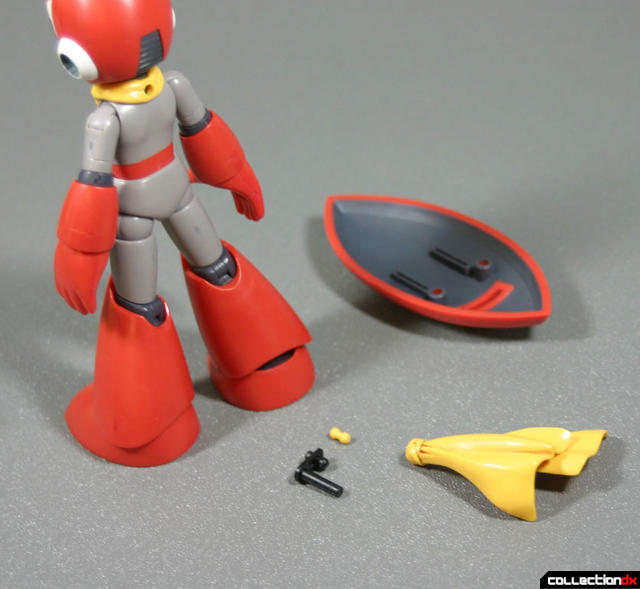 Proto Man’s scarf comes with two attachment parts, one extremely small part for holding the tail of the cloth and a piece designed to hold both the scarf and his shield at the same time. 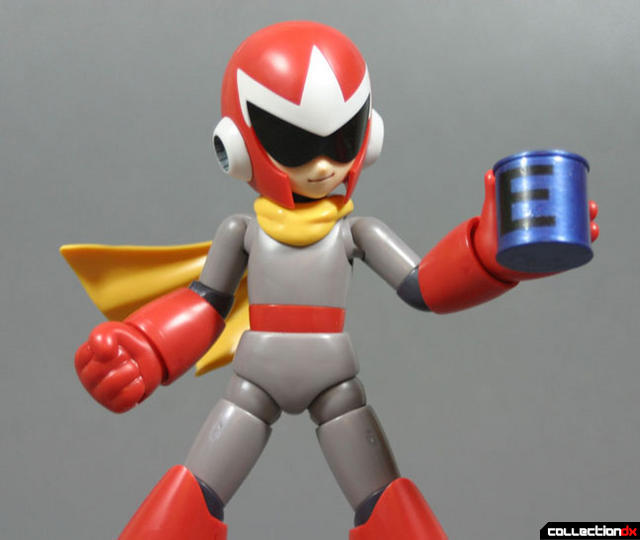 Proto Man comes with three sets of hands with a pair of open palms and closed fists as well as a set of hands dedicated to holding the shield. The open palms can hold the Energy Tank via a detachable tab. The only drawback to swapping the hands was their tendency of pulling out the polycaps that hold them to the forearm. 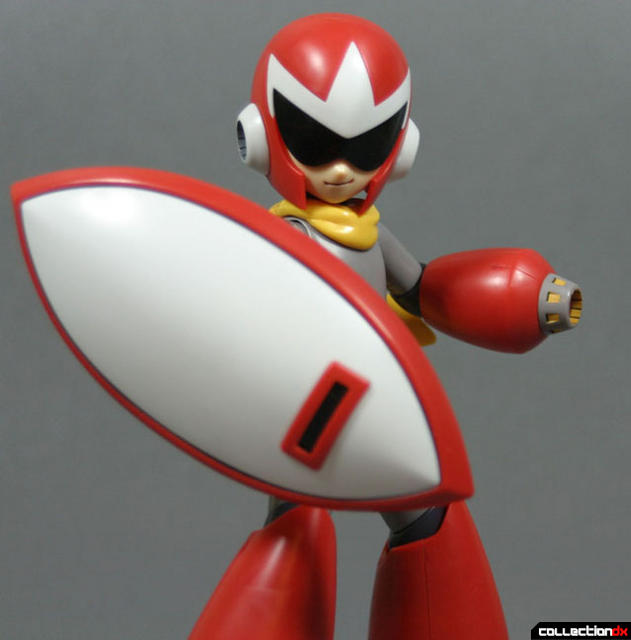 As the only weapon included for the model, Proto Man’s “Proto Buster” arm requires removing one of the forearms and is designed to be ambidextrous.

No matter how old you get, Mega Man is fun, either in pixels or plastic. The Proto Man model was a lot of fun and reminded me of how much fun the old Bandai kits were too. I can only hope that this series continues and eventually go onto the Mega Man X generation and pick up where Bandai left off! 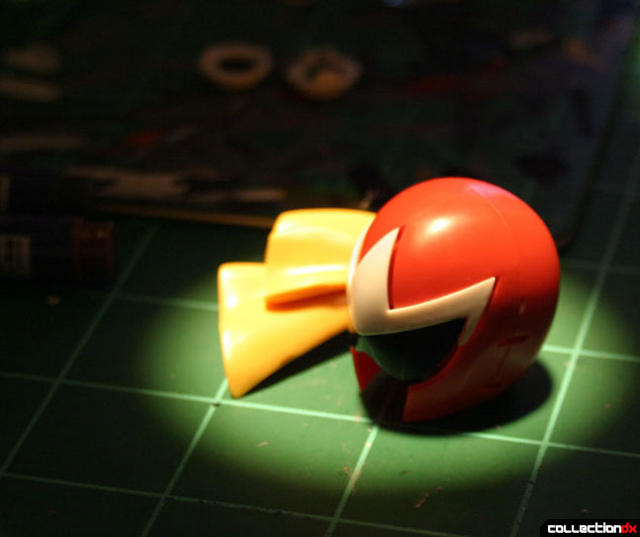 …I swear I keep hearing a whistle.

This sample is courtesy of Kotobukiya!

The skill you showed in handling this release was amazing, makes me sad for how unskilled i was with dancouga

Badass, that's a certain buy! I got Mega Man, so there's no question. Looks just as good as Mega Man is, so I'm very much looking forward to this one! Thanks for the little modeling tips along the way as well. Since I'm already planning on buying this, the tips were the most useful part of the review!