TFC Toys made a name for itself in the third party Transformers scene by releasing one of the largest and most ambitious not-Transformers to date, the gestalt Hercules.  Herc was a modern update of the venerable Constructicon combiner, Devestator, and wowed collectors with its size and ambition.  Now TFC is back with their next great undertaking, Project Uranos!

For details on the transformation and some more general thoughts, watch my HD video review! 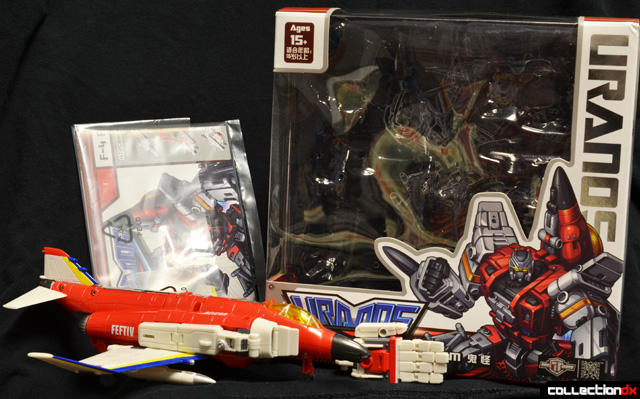 Uranos is a modern update of the most popular Autobot combiner, Superion, combined form of the gallant Aerialbots.  The first release in the Uranos series is the modernization of Fireflight, creatively named 'F-4 Phantom'.  Phantom comes in a nice looking window box with snazzy artwork and sharp die cut details. 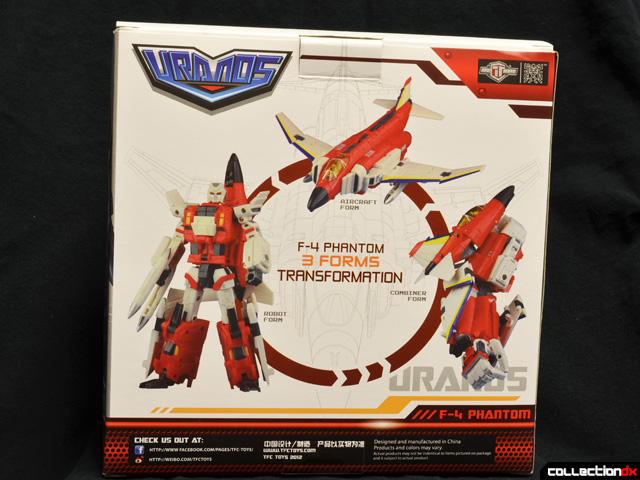 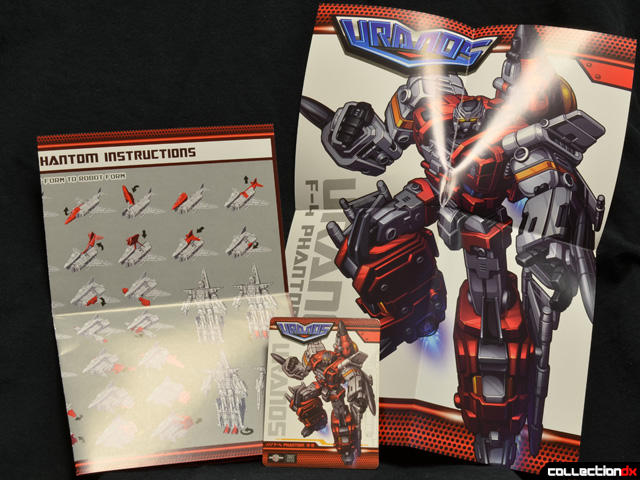 All the requisite paperwork is present, clear instructions, a poster, and a stat card.  Do people still care about stat cards? 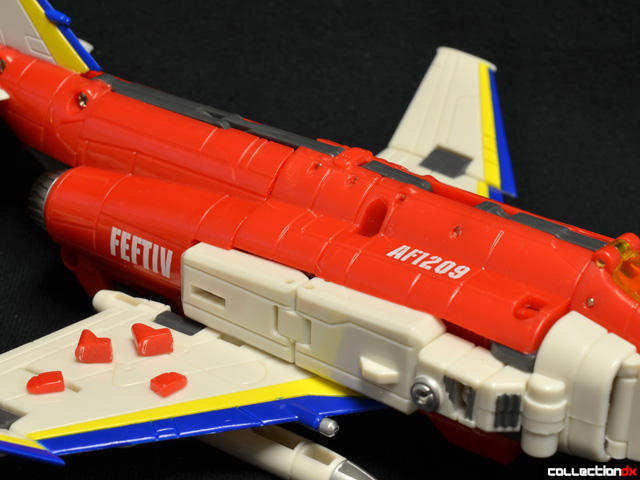 Before we talk about Phantom, there is a tiny bit of assembly to do.  Packaged in a small baggie are four screw covers for the back of the fuselage.  The covers are contoured to fit in certain holds and do a great job of matching the shape of the back.  I had to put a dot of glue on one of the thin covers, but the rest fit in snugly and securely. 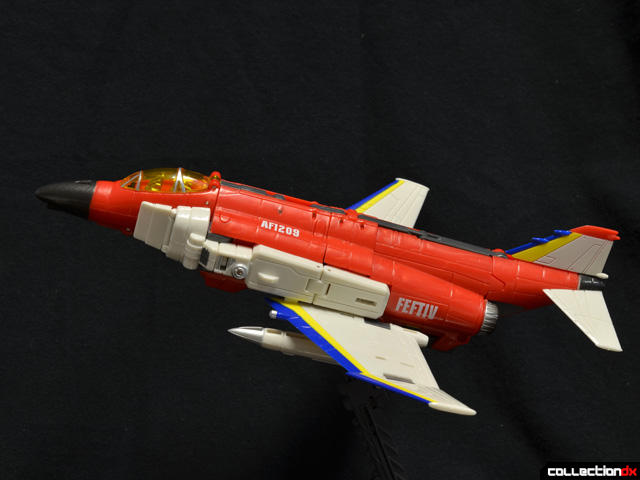 The F-4 Phantom is a Cold War era American jet fighter, a lumbering beast of a plane.  The Phantom takes a lot of flak for being chunky and maneuvering like a cow, but I think it has a certain charm that TFC's rendition manages to capture.  There is something about the design that I have always loved.  In a way, the Phantom is one of the last 'classic' USAF jet fighter designs before everything became flat and angular with the likes of the F-14, 15, 16, and 18. 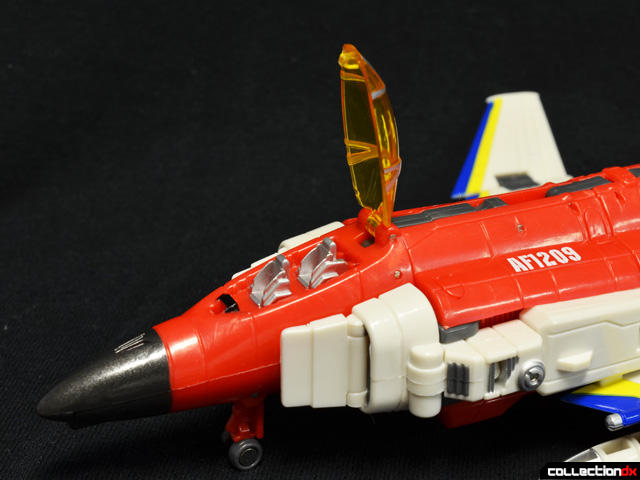 An opening canopy with two painted seats and a HUD console adds legitimacy to Phantom as a toy airplane. 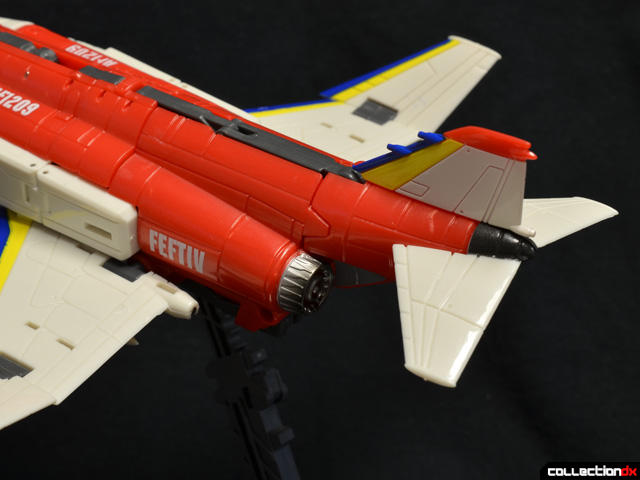 There is even nice weathering on the afterburner cans.  The paint in general is very sharp and clean. 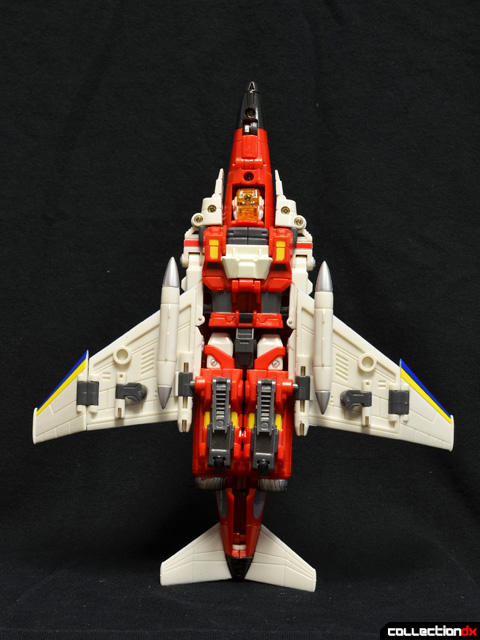 Phantom's underside is not so nice for an airplane toy, but still has merit.  Robot details and the turned around head are still visible, but the robot bits do not stick too much off of the bottom of the plane, so when viewed from the side the plane at least has a somewhat clean underside.  The drop tanks are removable and can be fit in two different hardpoints.  There are fold out nose and wing landing gear, but with the drop tanks on the wing-mounted gear does not quite touch the ground. 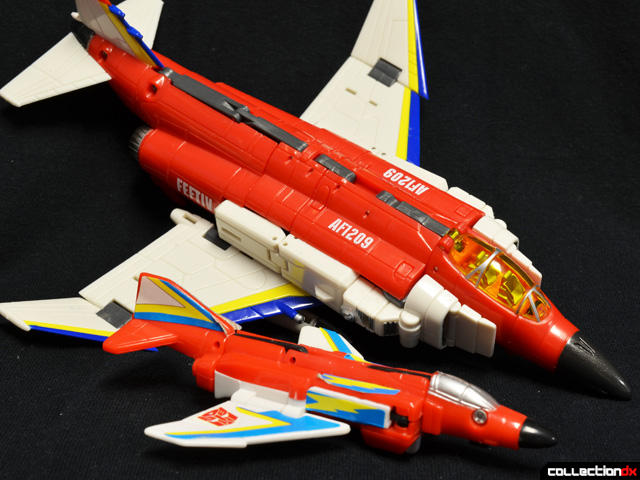 Comparing Phantom to my bootleg G1 Fireflight reveals how nice of a job TFC has done of maintaining the spirit of the flashy G1 colors while toning them down for some semblance of believability.  Phantom could pass as a snazzy stunt plane, where Fireflight was much more gaudy with the lightning bolt pattern blue and yellow stickers even on the sides of the plane. 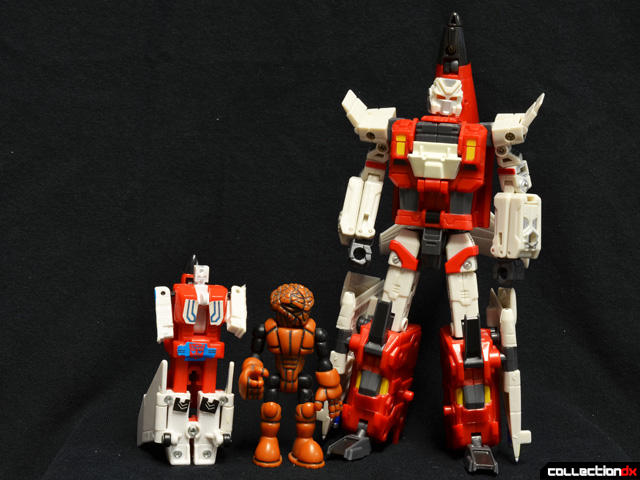 Transformation to robot mode is a straightforward affair, as described in my video review above.  I talked about combiner arm mode before robot mode in the video, but I'm going to skip around here and get to the best mode first.  I love Phantom's robot mode.  It's blocky in all the right places, and sleek where it needs to be.  The use of the intake fins on the shoulders adds a nice flourish to the silhouette, while the legs manage to appear both lithe and rugged. 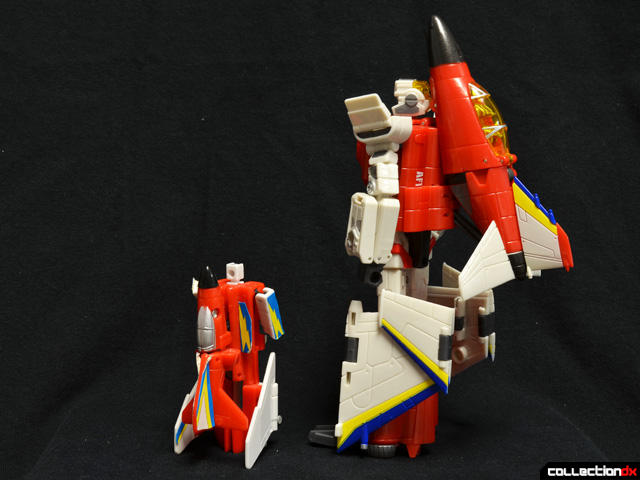 Phantom retains the jet kibble backpack that Fireflight and the rest of the G1 Aerialbot limb guys had.  Phantom's jet kibble is better managed with an extra fold to the wings and a nicely secured jet bit backpack. 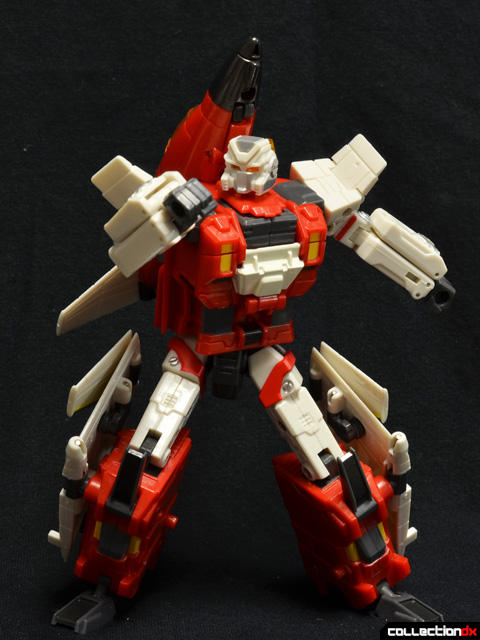 Posability is great.  Phantom has all the motion expected of modern transforming robot toys, including multi-axis shoulders, a waist joint, and posable toes.  The only slight omission is that the wrists do not rotate due to the transformation. 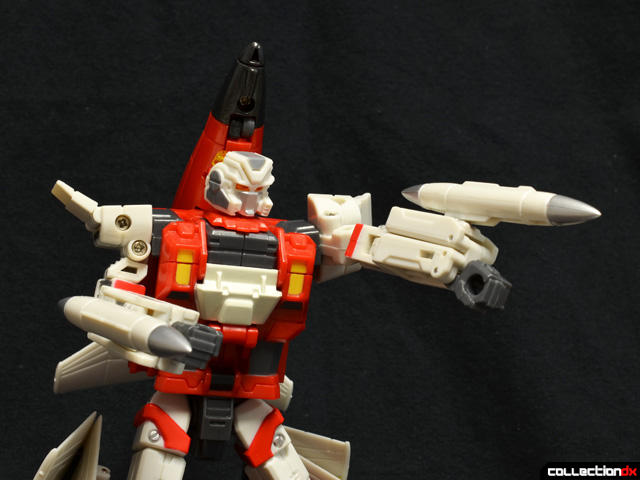 Phantom's only accessories are his drop tanks, which can be mounted on the arms as weapons... sort of.  They still just look like drop tanks, and are my only major complaint with the figure.  It would be great if the tanks transformed or split open or something to look more like weapons, or if Phantom just came with a pistol like the Aerialbots originally did. 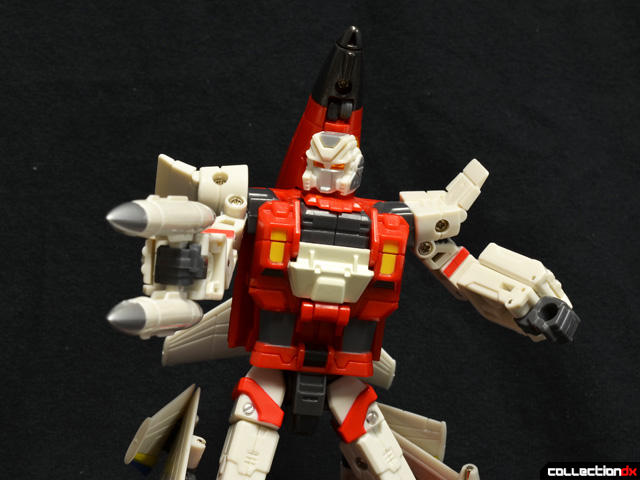 You can mount both the tanks in one hand and make something akin to the Plasma Rifle from Halo, but it still mostly looks like a robot jet guy holding his two disposable fuel tanks. 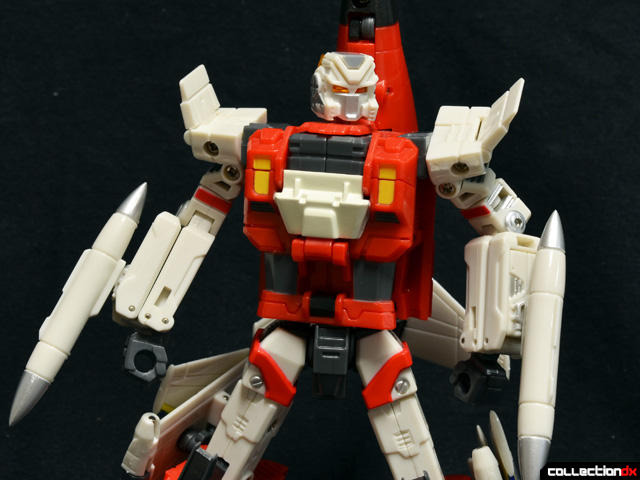 Lackluster weapons aside, Phantom is great.  His robot mode feels fantastic and is a lot of fun to play with.  The joints are all nice and tight.  He is a touch back heavy, but holds most poses with ease. 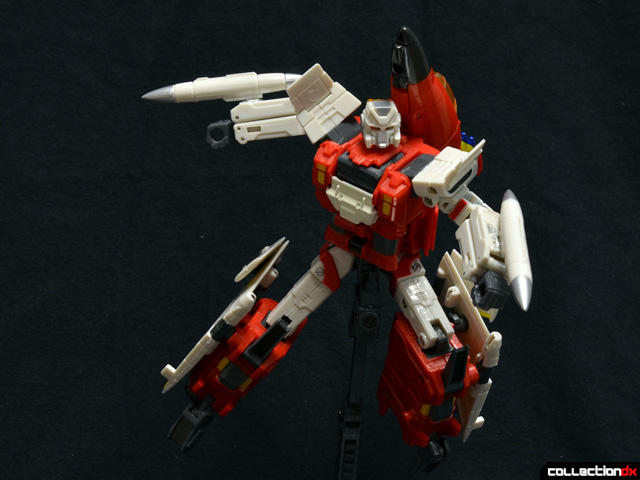 As discussed in the video review above, most Phantoms seem to have shipped with very squeaky hip swivels.  The joints are not excessively tight or fragile feeling, but they do make a little noise when moved.  Some people have gone so far as to disassemble the hips and either sand down some material or apply lubrication to the joint, neither of which I think is necessary. 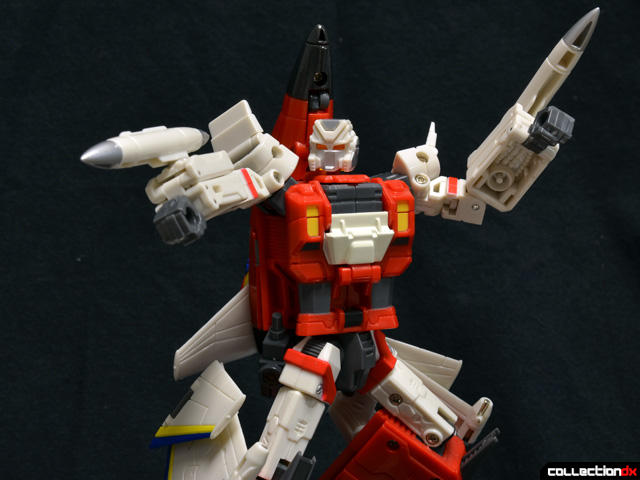 For such a well designed and nicely made robot with jet bits, I could almost see Phantom being reasonably priced amongst other third party original figures at $100 retail.  I think the jet mode is really terrific and robot mode is plenty of fun, but that's not all Phantom does... 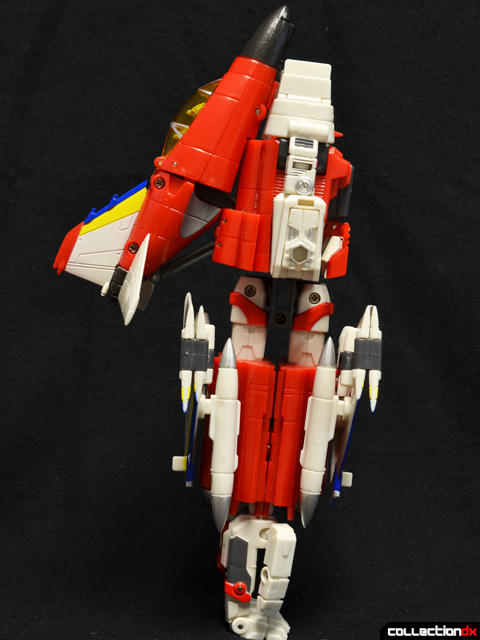 In between jet mode and guy with jet bits on him mode, Phantom also becomes the right arm of Uranos.  The combiner fist attaches via a connector part and is articulated at the wrist and at two joints in each finger and thumb.  Arm mode holds together pretty well, but the wings and drop tanks can be a bit fiddly. 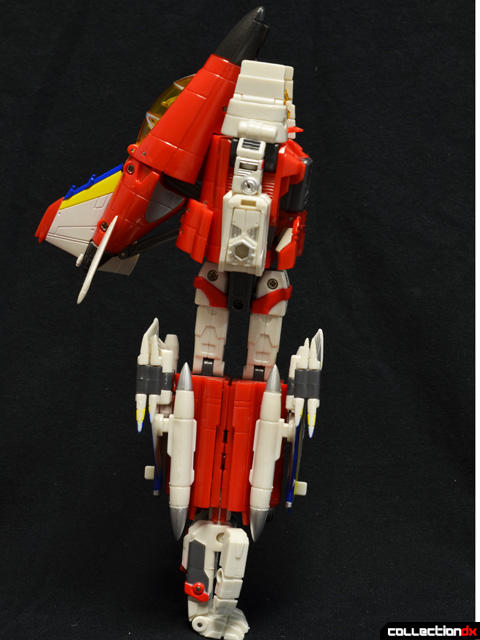 The arm mode can also be extended where Phantom's legs deploy to add an additional elbow joint.  We will have to wait until the full combination to see if this idea looks too long or noodley. 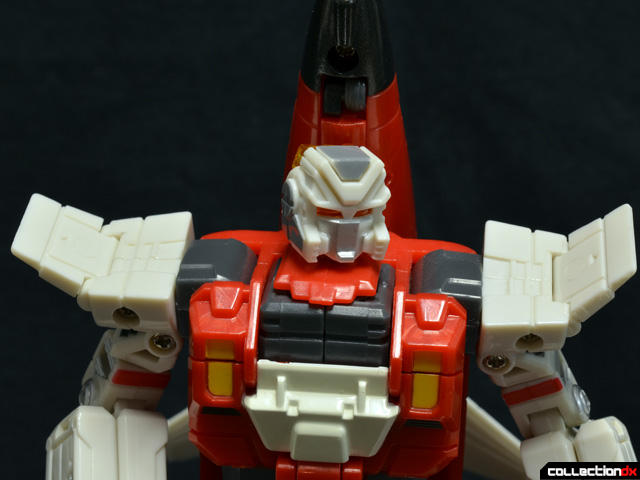 For the first member of a five-part combiner team, Phantom makes a wonderful first impression.  If TFC can keep this up, Uranos will really be something special.

it's figures like this that remind me of why I loved transformers as a kid, and while I don't have that loving bond with them anymore thanks to the travesty that was Transformers Animated, I still check up on the toys every so often...and it's amazing how far they have come! taking such a chunky brick that is the G1 designs, and making them able to be put next to the newer toys is such a technical marvel!

...kinda wish that the Braves would get the same treatment....as nice as the SRCs are, I wish I could experience the whole thing with today's technology...

I remember when Toynami made their Robotech Masterpiece line and I didn't know better (and Yamato didn't exist) and I went on to buy the complete VF-1 set.... Guess what I just started doing.. again.

Maybe hold off until I post my review of Blackbird (Silverbolt) to make that decision. Just to be as informed as possible.

Being smart. Going one at a time. Thanks!