You ever walk through a store's entire toy section and not find a damn thing to buy? Have that. Don't want this. That toy has a better variant/running-change that you haven't seen yet. Eventually you know you're gonna leave empty handed, so you decide to visit the toddler toy section as one last resort. Maybe you'll find some cool Imaginext toy that homages some old toy line from decades past or is some obscure pop culture reference. Maybe you'll find some small fun simple toy to make your visit not feel like a complete loss. But maybe, just maaayyyyyybee...you'll look down into a shadowy hanging Wal-Mart shelf basket and uncover a whole new line of Transformers toys, reveling in the discovery of fun!

Today's toys came about that way.

So today we will be looking at two of the Playskool Heroes Transformers Rescue Bots Academy Blind Bag figures.....Specifically good ol' Optimus Prime.

Both Optimus Primes we will be reviewing today just come in simple heat-sealed bags. They advertise that there are 16 figures in total to collect. 8 characters in 2 styles each. This is also Series 1, but I don't think they ever made any more series beyond that. This line kinda came and went.

The toys are marked ages 3-7 so you can give them to little kids. There's a clear Autobot faction symbol shaped window on the back of the bag to "sneak a peek" at what figure is inside in case you want a specific one or are trying to complete the set of 16.

Each figure itself comes clipped in a clear vaccu-formed tray that holds their body and arms seprately (we'll get to why that is done later on in the review). 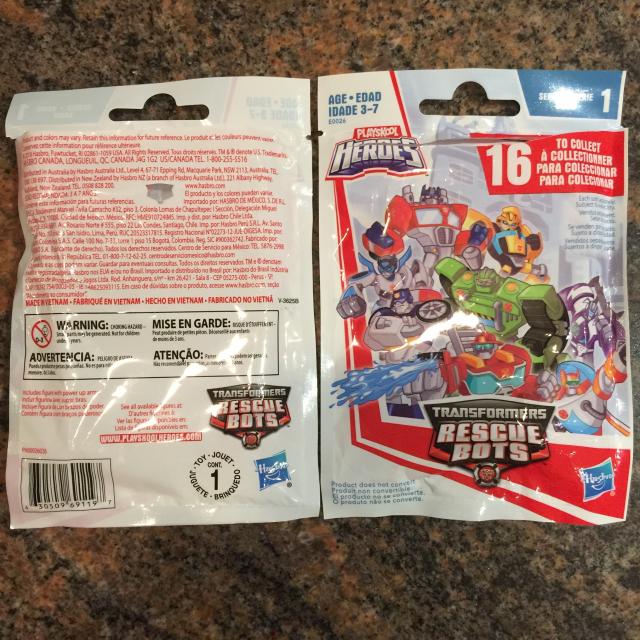 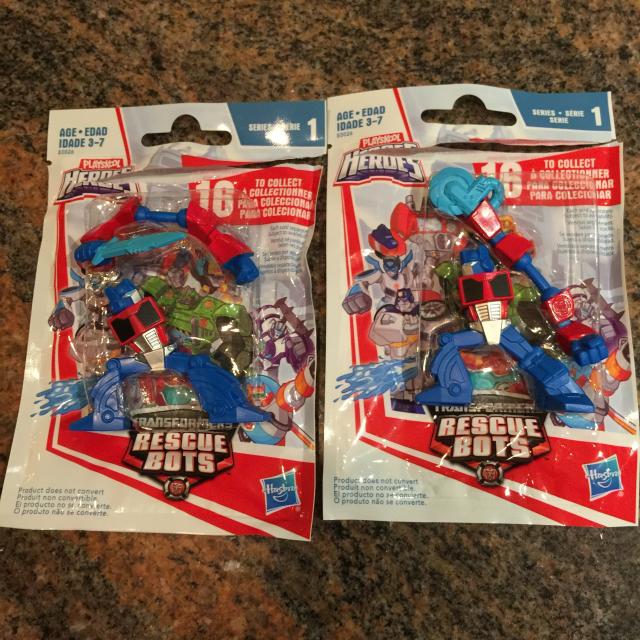 None. Nada. Zip. Zilch. Zero. You get the idea.

The sculpts are simple but get the idea across. This is a softer, kid-friendlier Optimus that spends his time mentoring the fellow Rescue Bots on how to save humans from disasters, hence the saw blade. He probably uses that to cut down trees or tear open crushed cars and remove debris. The Decepticons are long-gone in this timeline, and the Autobots remain to protect the Freedoms and Rights of all sentient beings. Why one Optimus has a sword, I dunno? Maybe it's a remnant weapon from the Cybertronian Wars that he now uses to fell trees or...something. Wait...we already guessed that Sawblade does that task. Hmm? Geeze, what would you use a sword for in Rescue operations? Ah whatever! It looks cool and thats all that matters!

As for the figures themselves, this is definitely Rescue Bots Optimus. The sculpted badge on his left shoulder proves that. Each figure is sculpted in an expressively heroic stance and when we explore their special gimmick later on in this review, you'll see how they can be even more expressive with one simple trick.

The weapons of each figure are well detailed for their simple style. They're the first thing my eye goes to when viewing the figures. They just immediately grab your attention. Every detail of the sculpt through these two figures captures light and shadow well, and doesn't get lost from their lack of paint or simple color usage.

The paint applications on each figure is again, simple but gets the idea across. Prime is molded in solid blue PVC. Red paint apps are used for the torso and arms. Black paint apps for his truck windows. Silver for his pelvis, abs/grille, and faceplate. And a lighter blue a.k.a. "Allspark Blue" for his eyes and weapons. It's not much, but it doesn't need to be and it gets across the message that this is indeed the beloved Autobot Commander, Optimus Prime.

1 point of articulation at the shoulders that moves both arms at the same time.

None...unless you count the arms as an accessory. 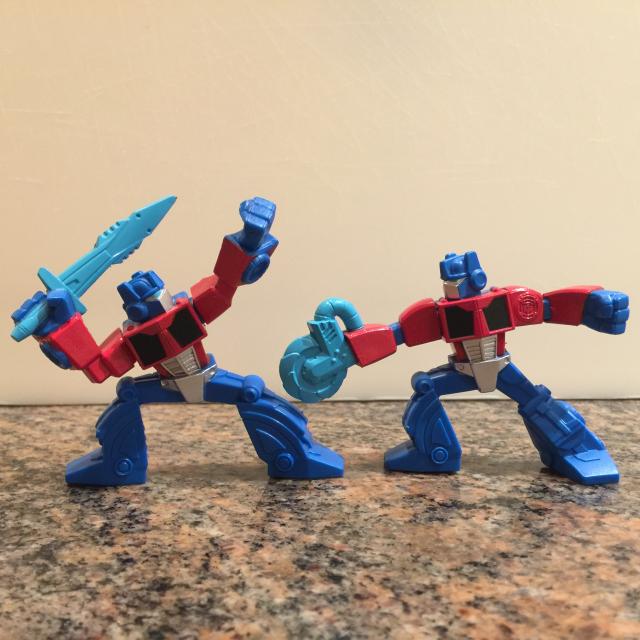 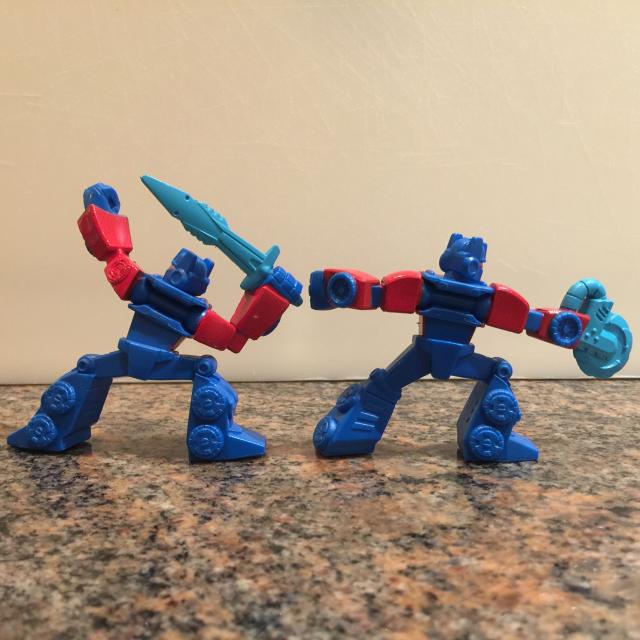 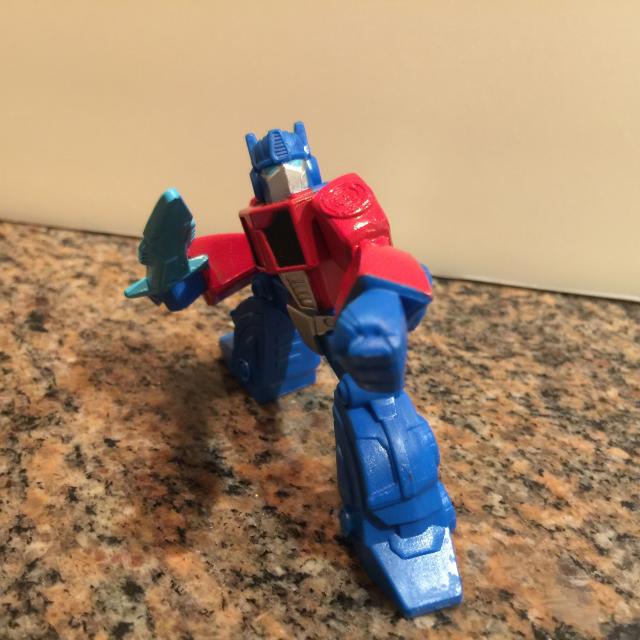 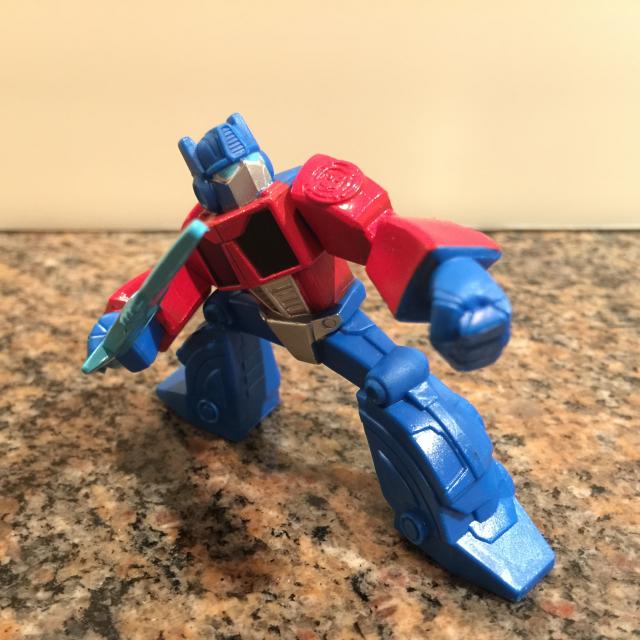 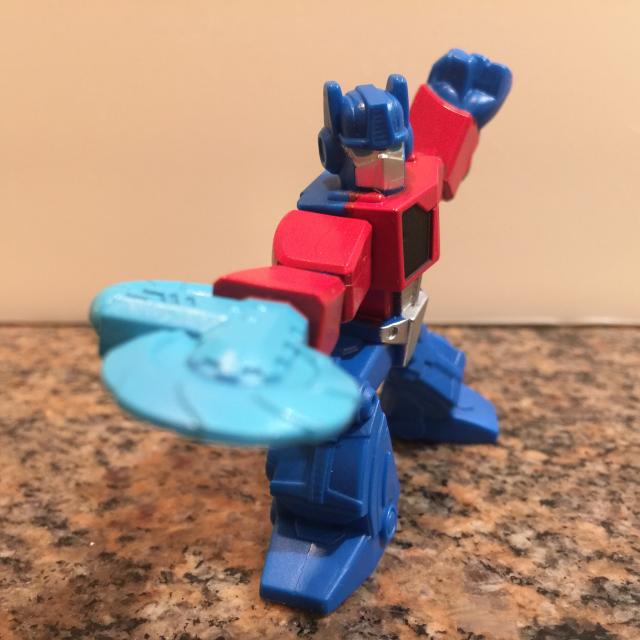 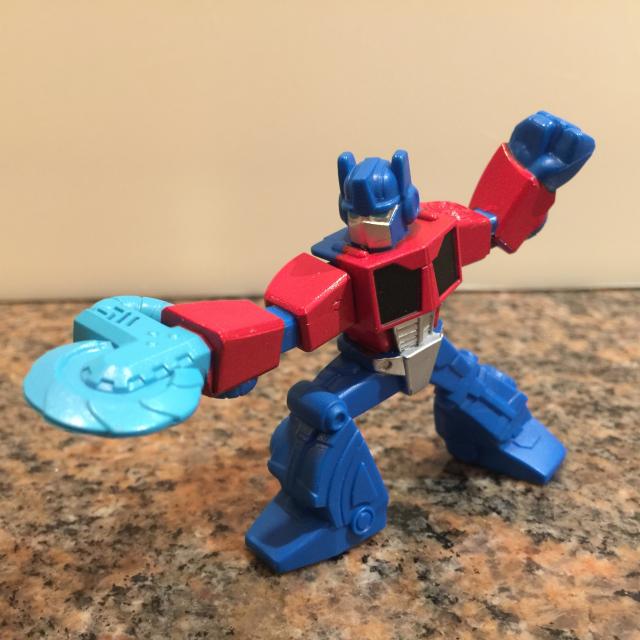 This is where the fun begins! The gimmick of this little line is that you can swap the arm sets between all 16 figures, giving them different weapons and appearances! It may seem simple but it makes a big difference and really "transforms" the sculpts once you do it between 2 figures of the same character. Just look at how much Prime changes when you switch his arms around! He looks like he's gonna take somebody's face off with that sword! 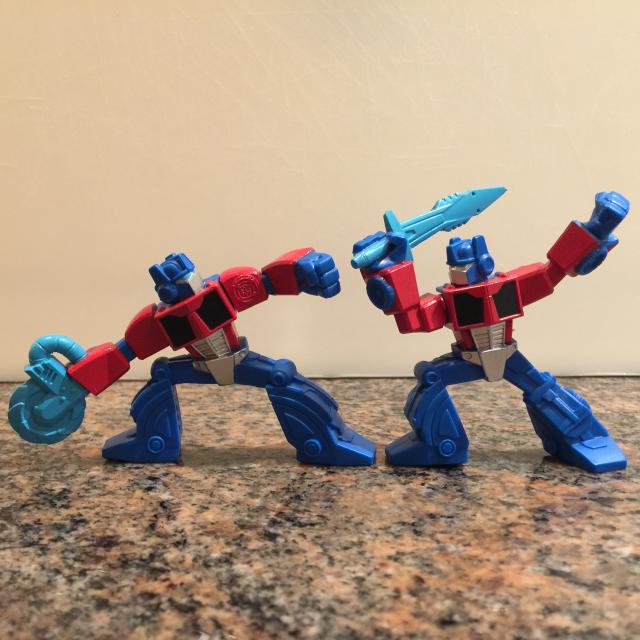 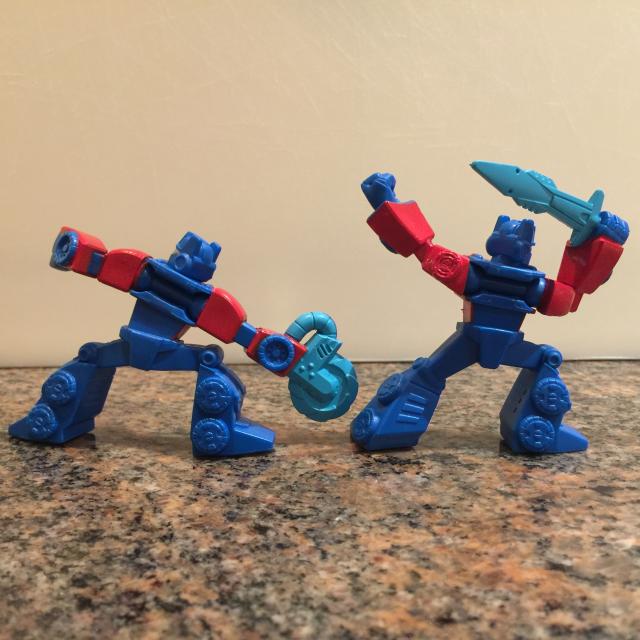 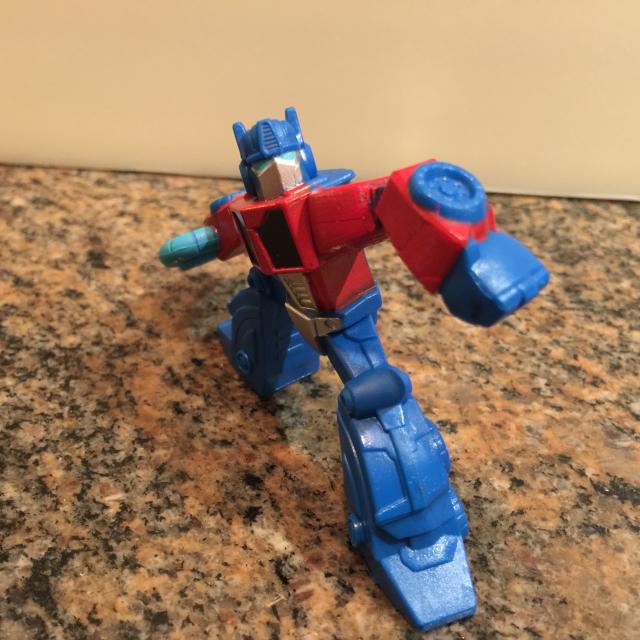 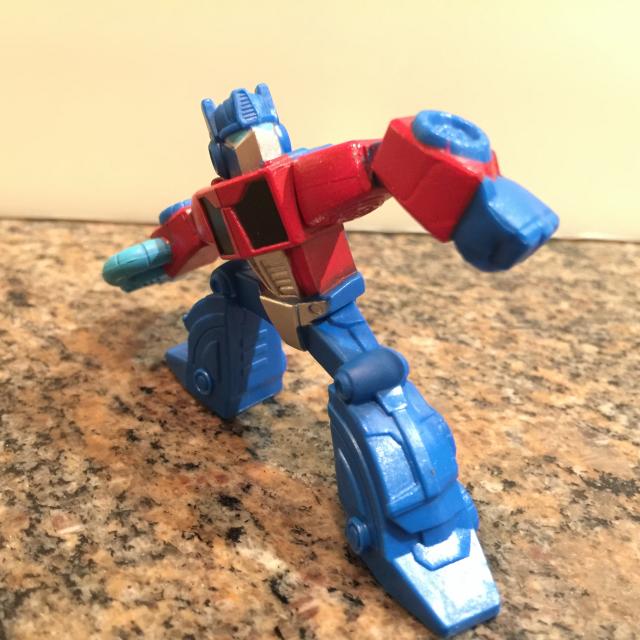 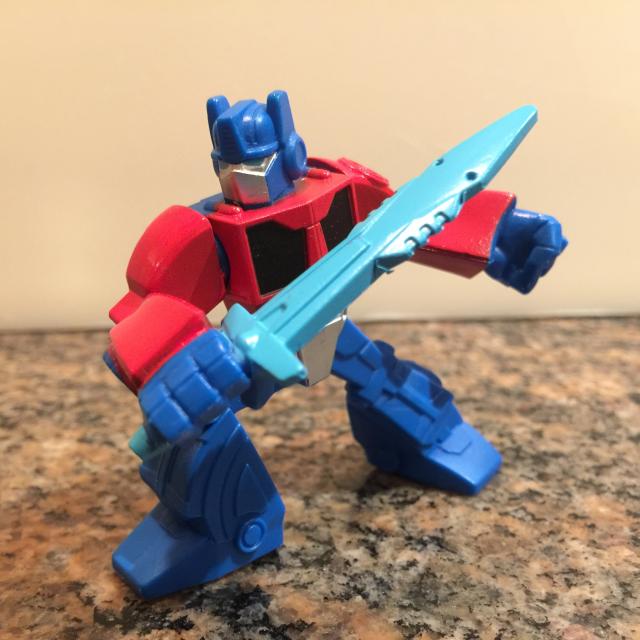 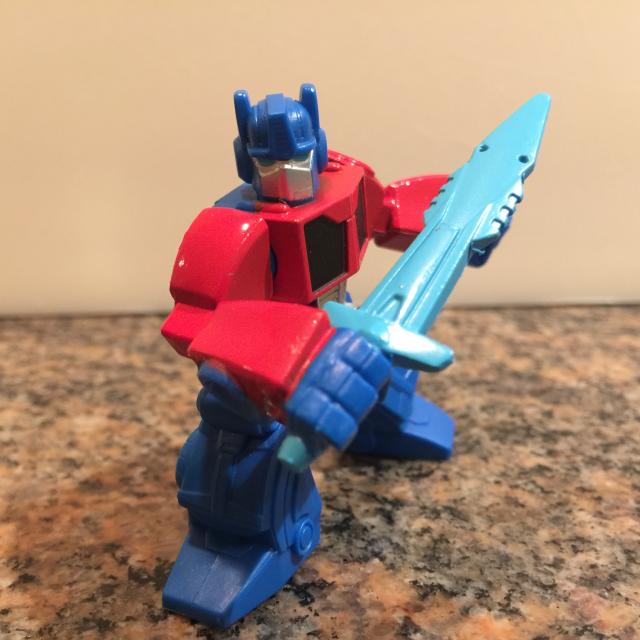 All the figures in this series are made of a tough PVC to withstand tough kid playtime and those kids that chew on their toys. You know who you are.

At $3 each, it's a great impluse-buy value. For under $7, you can get both figures of a charcter, and you can get all 16 figures for around $52 if the store has every one in stock and you're a completist looking to splurge.

Purchasing verdict (should you buy it?):

For kids, fans, or collectors, this is a great little item that's worth grabbing. Be you a fan of Transformers or more specifically the Rescue Bots cartoon, I recommend it! It also makes a great little gift or stocking stuffer.

I like these little Primes. Sure, they may not move much at all, or even actually transform, but gosh-darnit! the ability to swap arms and weapons is where the fun truly lies. Worth a buy!