Tamashii Buddies Piccolo was provided by Bluefin Tamashii and is available at Amazon, Big Bad Toy Store, and Entertainment Earth. 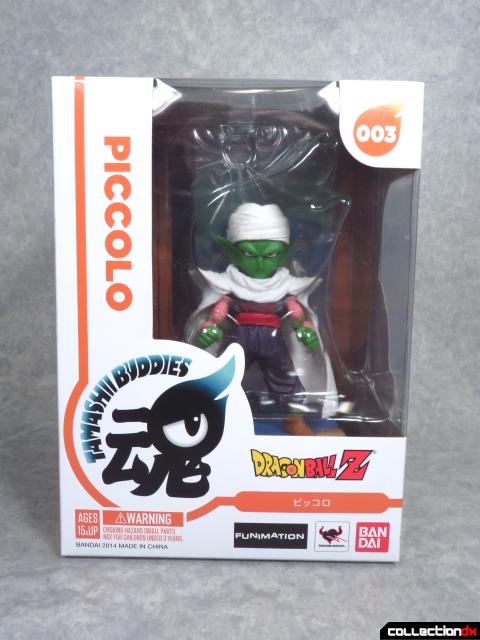 Bandai's new Tamashii Buddies toy line consists of collectible PVC figurines that each come with a unique backdrop. The size and design of the packaging seems quite similar to another popular brand of character goods. I'll be looking at the Piccolo from this line as I've always had a soft spot for that grumpy green guy. 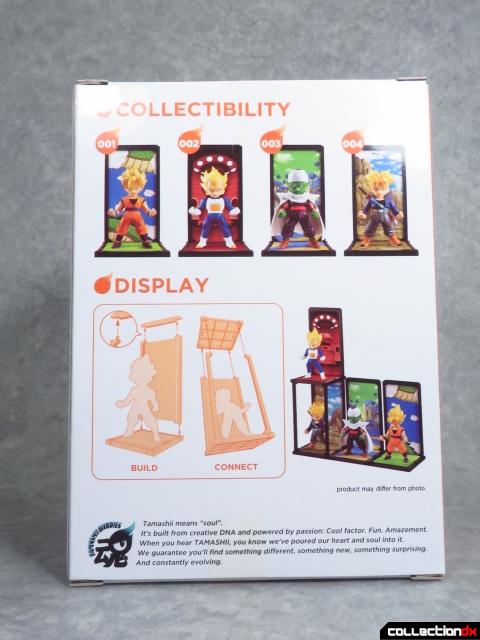 The back shows off a few more Dragonball Z based Tamashii Buddies. Bandai has plans to cover other popular properties such as Sailor Moon. 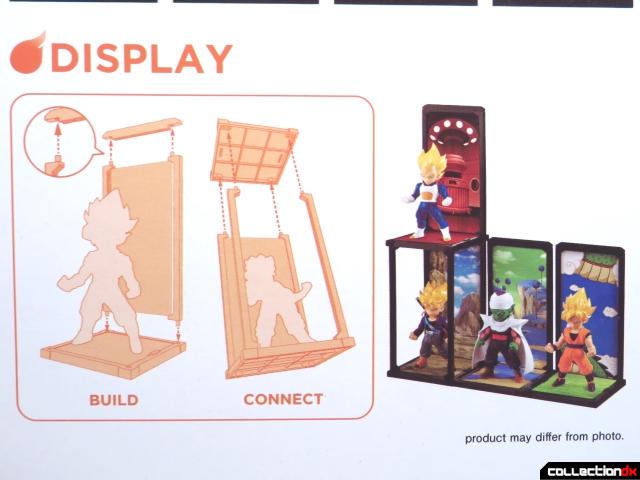 Outlined here is the line's main gimmick of being able to connect multiple figures into a large display. 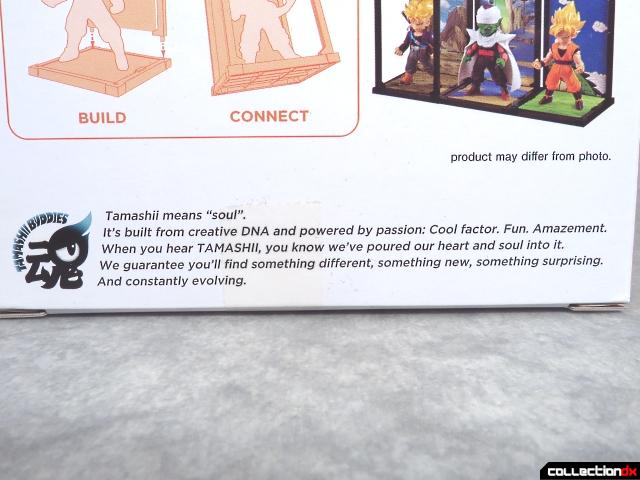 I appreciate them having this explanation of the term "Tamashii" as well as the stylized kanji (魂) as the logo. 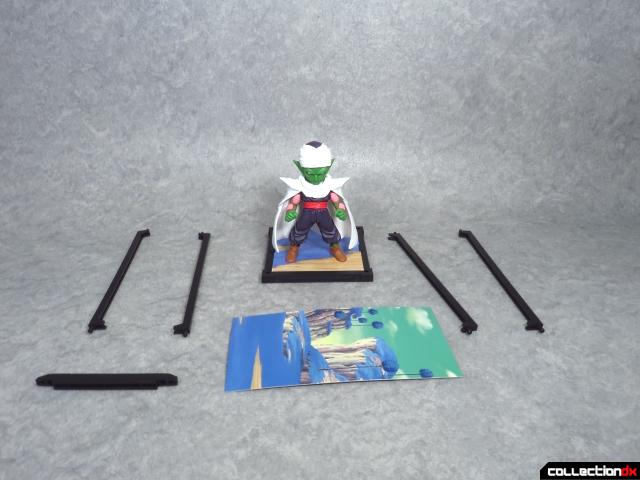 Here is the box contents. You get the main figure on its base, four plastic struts, one cap piece, and a printed backdrop on a piece of sturdy cardboard. 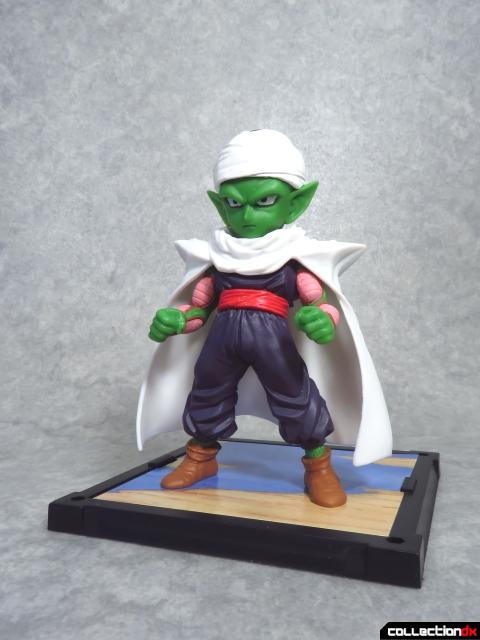 Piccolo stands about three and a half inches tall and as far as I can tell is permanently attached to the base. The figure's sculpt is quite good and paint apps are very clean. Giving DBZ characters this kind of "taller" SD styling reminds me of Akira Toriyama's work on video games like Dragon Quest and Chrono Trigger. 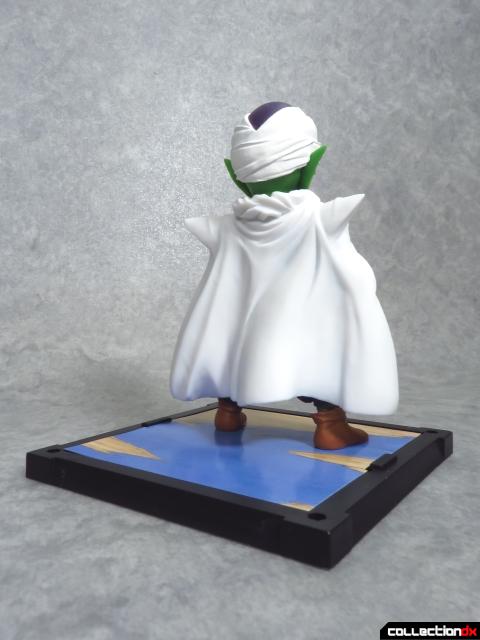 His signature cape and turban have realistic folds sculpted in for the proper "brooding while standing in a slight breeze" look. All of the figures come on a unique base with Piccolo being shown standing on his home world of Namek. 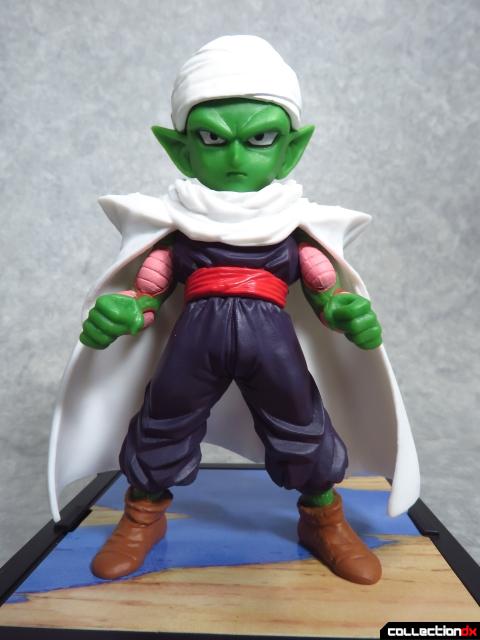 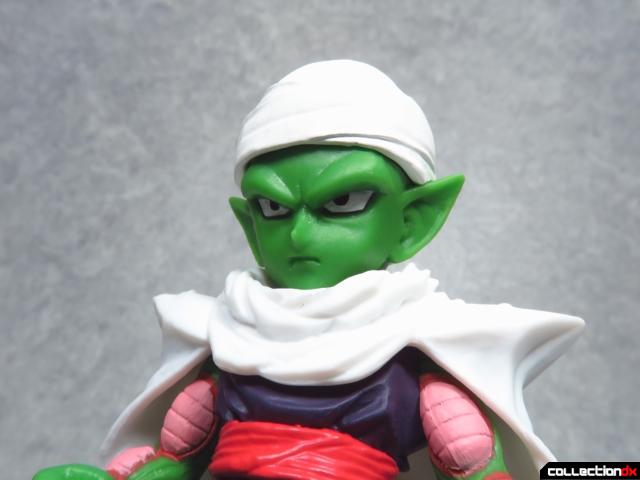 These are the eyes that grudgingly watched out for his friends and helped young Gohan become less of a dork. 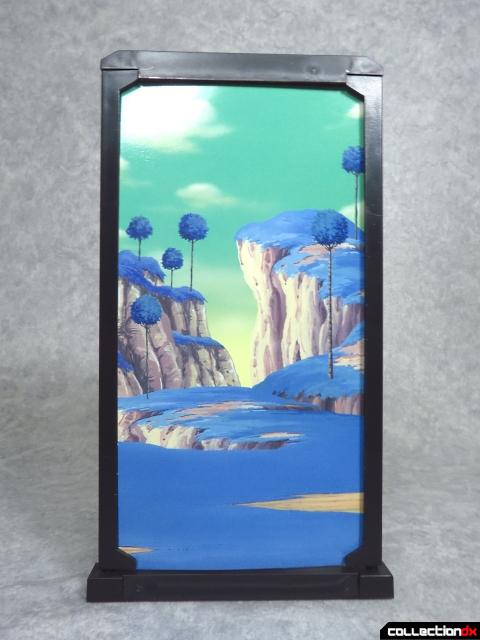 To complete the display, you plug in two of the plastic struts to form a picture frame and slide in the backdrop. Finish by capping the top off with the included cap. The background is done with an attractive high quality print and shows the calming spherical trees of Namek. 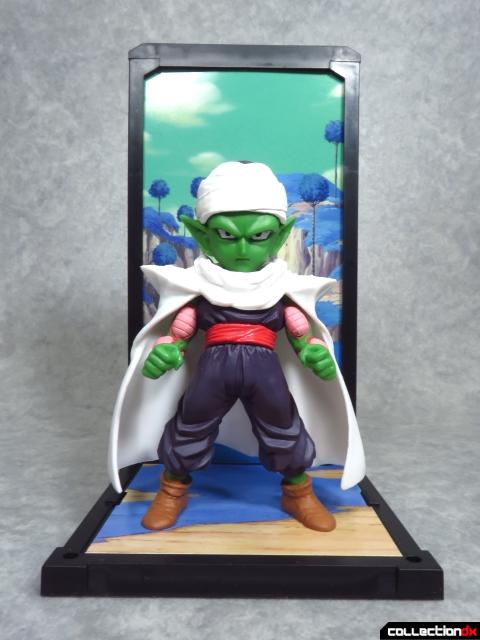 With everything setup, Piccolo now has a tidy little diorama that is about five and a half inches tall. 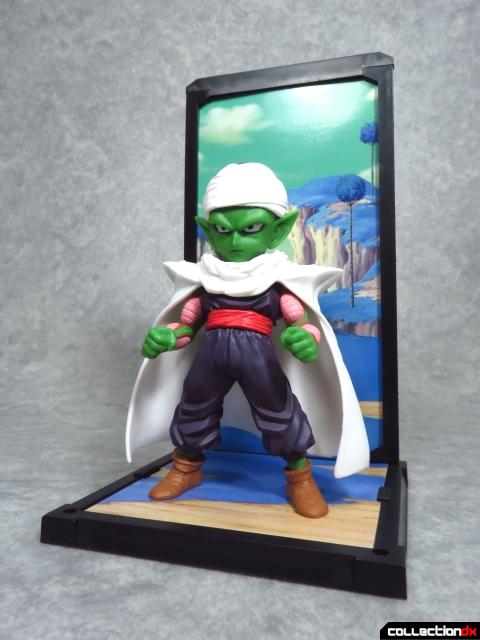 The backdrop provide a simple but effective setting for the figure much like a matte painting. Looking back on my DBZ watching days, I feel like I've never really left Namek... 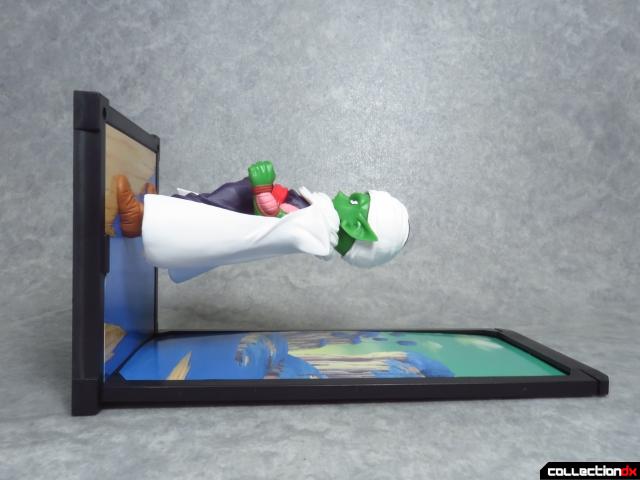 Again, Piccolo is not removable from his base and is actually secure enough to remain upright even when the whole thing is laying on end. 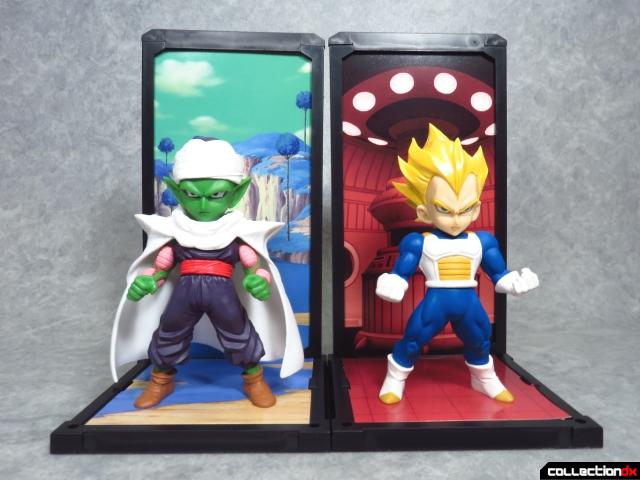 Tamashii Buddies are meant to be displayed together so here is Super Saiyan Vegeta rounding out the villain turned hero duo. 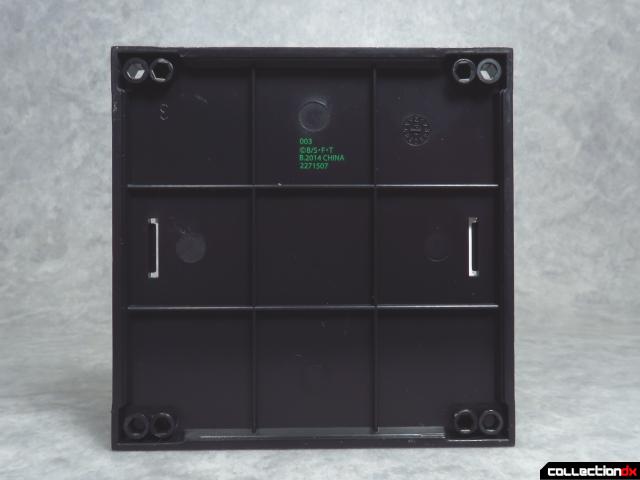 As you saw on the package, Tamashii Buddies can be stacked on top of each other using the additional struts provided. To connect the base to each strut, you have to use the inner holes on the bottom. 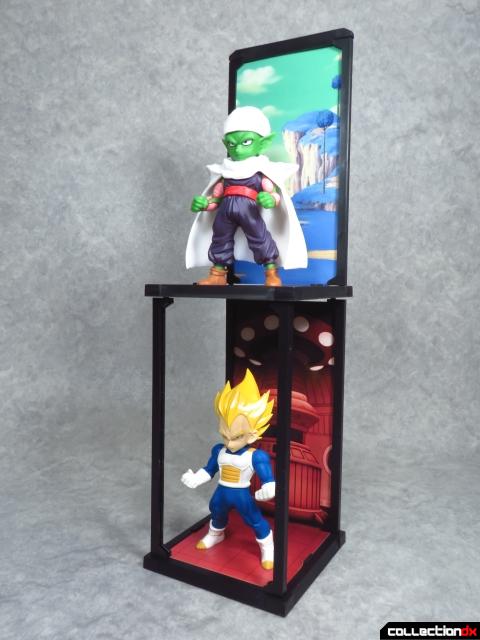 And now you've got a small tower of Tamashii. It's a cool idea and seems quite sturdy when all pegged together. You can pick the whole thing up by the top and it won't come apart. 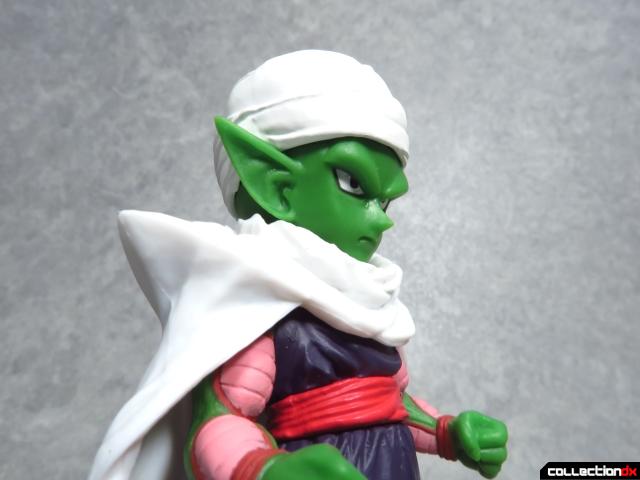 Still, I prefer Piccolo without the backdrop so he can freely watch over the world from up high regardless of setting. He's wondering if Gohan is out there fight and if he's learned how to dodge...

Overall, Tamashii Buddies seem to be a respectable effort from Bandai in a new collectible figure series. Piccolo himself has a terrific sculpt and finish, with the optional backdrop providing an extra bit of flair. The ability to stack multiple figures is a effective gimmick and I can see fans getting a whole slew of characters all lined up. At $14.99 MSRP they cost a bit more than the competition but Bandai is putting forth something with more attention to detail and presentation. We shall see how buyers respond, but I can say this is a well executed product.

Thanks again to Bluefin Tamashii for providing the Tamashii Buddies Piccolo. He is available at Amazon, Big Bad Toy Store, and Entertainment Earth.

Wow. I'd like to see more characters in this line. I'd love to have a giant display of different characters from various shows or franchises.