Whether you spell her name with or without the ‘h,’ one thing is clear: “One Piece’s” Perona (or Perhona, whichever makes you happier) is freaking adorable. From the pink hair, the too-round eyes and little umbrella down to the horo horo horo laugh, she’s a striking character in a show of striking characters. At my local anime shop, every piece of Perona merch is costly - because she’s in high demand, I am told. I don’t doubt it. And while shelling out $160 for a statue is something I’d love to do, I’ll stick with my “One Piece” blind packs, because occasionally they pay out. In a big, big way. In a pink, ghost-y way. 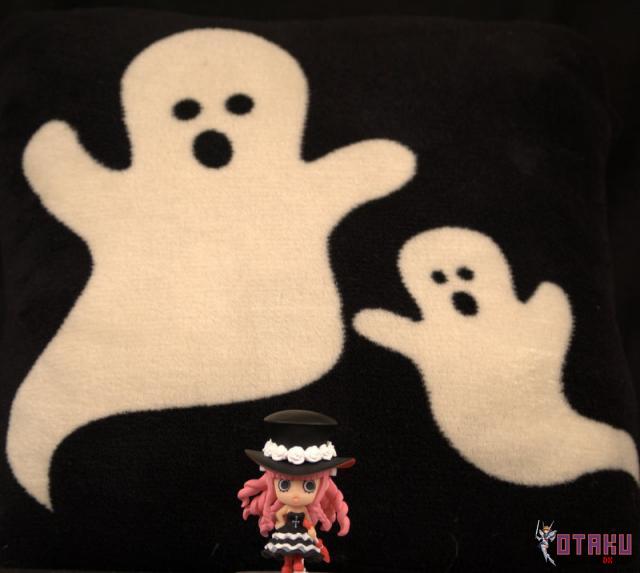 Let’s give her a good once over, shall we? A little bigger than a petit Nendoroid, this is a simple piece. She’s seen in her post-time jump outfit,  umbrella in hand, her mouth open in surprise. 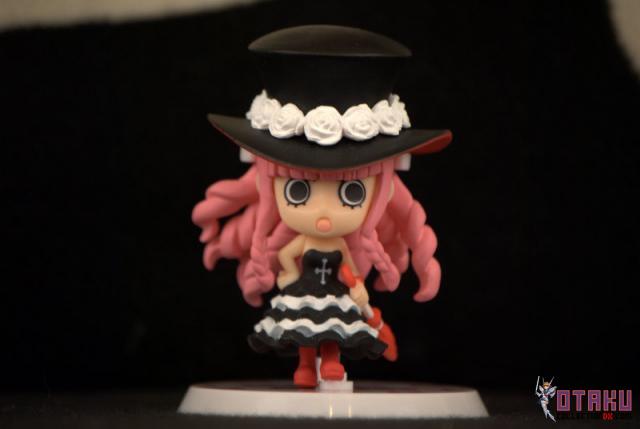 I’m pretty impressed with her hair on so simple a figure. It’s not as concise a sculpt as the bigger figures are, but for the size and price it’s pretty decent! There are mismatched flakes of paint on her ruffles, but they aren’t terribly distracting. 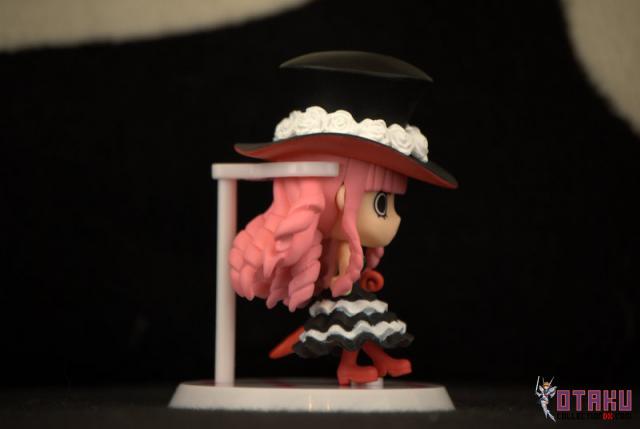 The first thing of note from this side is the stand. You can see she’s held up by a little vise thing that goes around her head. It’s a little visible from the front and therefore a bit distracting, but really, that’s a small issue. What baffled me most about the figure was the little bump under her feet. Both her foot and the stand had a tiny hole, as if to place a slim peg to connect foot and stand. However, the stand came with a weird piece shaped almost like a lego coin, which didn’t attach to the foot and as far as I can tell only served to raise the stand to her feet. It’s odd, to the point that I’m half convinced I’m doing something wrong. As there are no other pieces, though, I guess this was what they intended? Maybe?

You can see the paint impurities a little better from this angle. 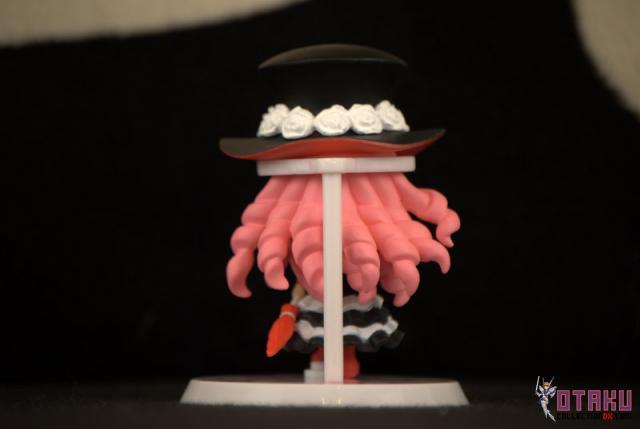 From the back, she is perfect. Her hair has beautiful spirals, and she just looks wonderful. 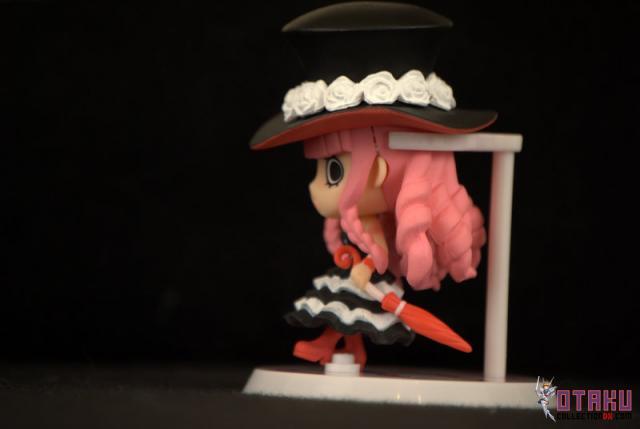 From this side, there are three things of note: one, the umbrella in her hand; two, the bat tattoo on her arm and three, the giant gap between her front and back hair piece.

Let’s get a better look: 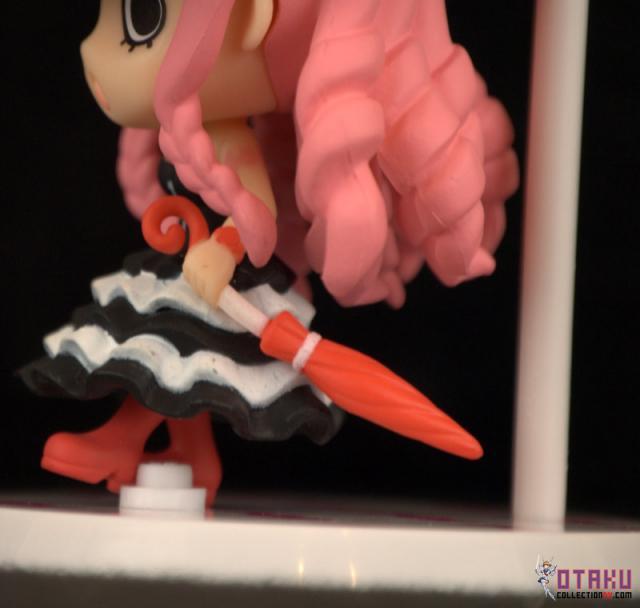 You can see the umbrella much better here. While the handle curls in, you can’t see the little devil horns on the top. She sports a red watch on her wrist, and higher up you can barely see her little tattoo. It’s really hard to see even when you hold her. Notice how the boot doesn’t really sit on the base peg at all. 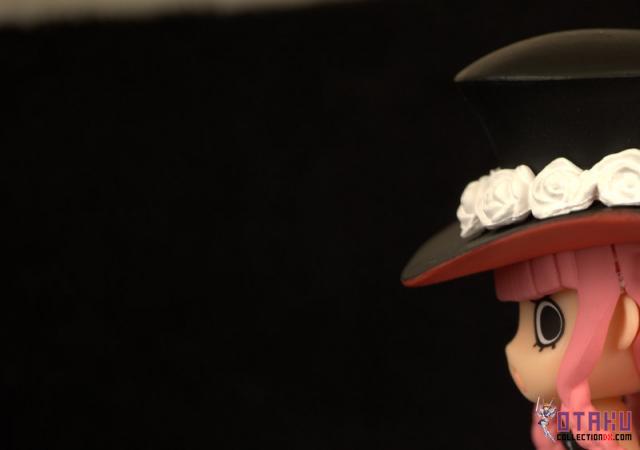 And here’s her head. The gap is significant, in terms of the scale, though not nearly this noticeable when you hold her. You can even see what looks like strands of what appears to be glue. It kind of looks like someone chewing with their mouth full.

And last, the base: 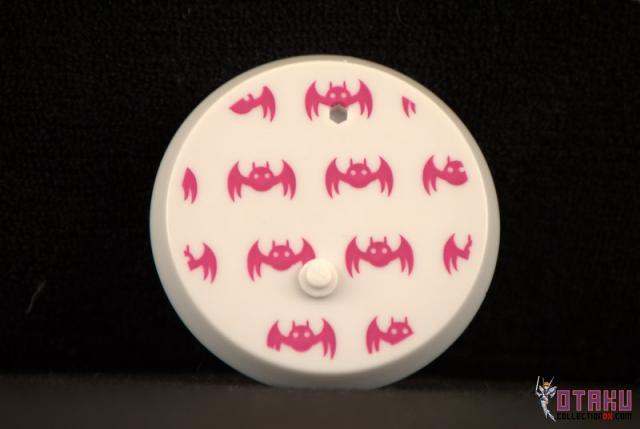 Cute, right? It suits her - she only plays with cute toys, after all.

All in all, I’m fairly fond of this tiny figure, despite the problems with the paint and assembly. She’s ridiculously cute, though I’m probably biased, what with my pre-existing adoration of her. I plan to make her terrorize my petit Nendos, just for fun.