If you know me, you know that I'm not the biggest fan of "designer" toys. I don't care for the exclusivity or pretense that surrounds about eighty percent of that "scene". But the other 20 percent consists of some really down to earth, honest-to-god legitimate cool toymakers.

Many of these guys stem from or are inspired by Matt Doughty and his company, Onell Design. Matt is the great enabler who has this ability to help foster people who want to start their own lines. He simultaneously infects them with with a positive attitude and a culture of inclusion that really resonates with me.

The first time I heard of October Toys was through Matt. He was helping these guys make some army men style zombie figures which I thought were pretty cool. It was this association that caused October Toys to start a forum to help fans of not only their lines but also Glyos and associated toymakers, big and small.

The OMFG (Outlandish Mini Figure Guys) are a tribute to the old M.U.S.C.L.E. figures from the 80s. M.U.S.C.L.E. were little rubber wrestling guys that were imported from Japan where they began their life as Kinnikuman. Their spin was to take different artists to design original figures in the spirit of those original M.U.S.C.L.E. figures.

I came across Series 1 at Newbury Comics. I was out at lunch from work and I was surprised to see this thing at retail. Initially, I only bought it just to support these independent toymakers, but as they became my desk pets I really got to enjoy them. I'd pick one up while on a conference call, exploring the tactile sensations while talking to a group of strangers in another time zone. I won't lie, on occasion the ended up in my mouth. I have no explanation.

So I became a fan of the OMFG line. I never got around to reviewing series 1 or 2 because they lived at my desk at work. But Series 3, which was funded over Kickstarter, would ship to my house and I no longer worked at that office, so now I finally had a chance to do a proper review of the line. 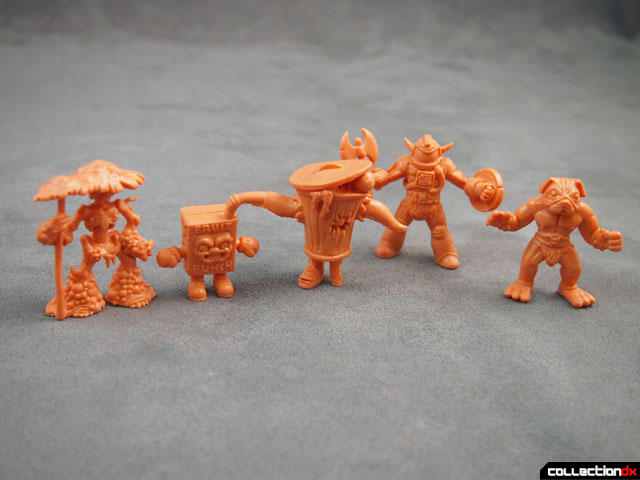 A sixth figure, Zombie Pheyden (designed by L’amour Supreme sculpted by George Gaspar) was offered as a Kickstarter exclusive.

The figures are sold on a nice blister card that would not have been out of place on the pegs of Toys R Us in the 80s. These look like professional, mass-market retail packaging. The back has illustrations of al the characters. 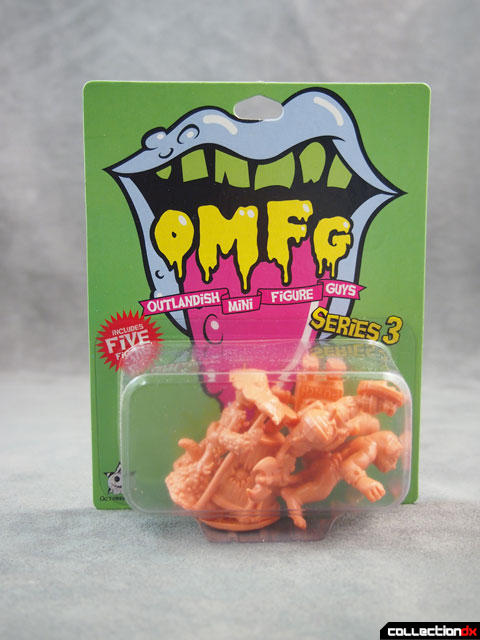 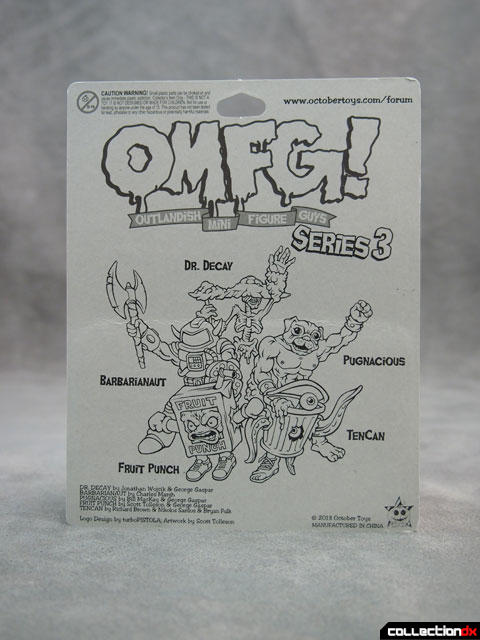 Pugnacious
designed by Bill MacKay and sculpted by George Gaspar

Pugnacious is the most like the traditional M.U.S.C.L.E. figure in both pose and design. It's essentially a barbarian with a pug head and extremely well sculpted nipples. 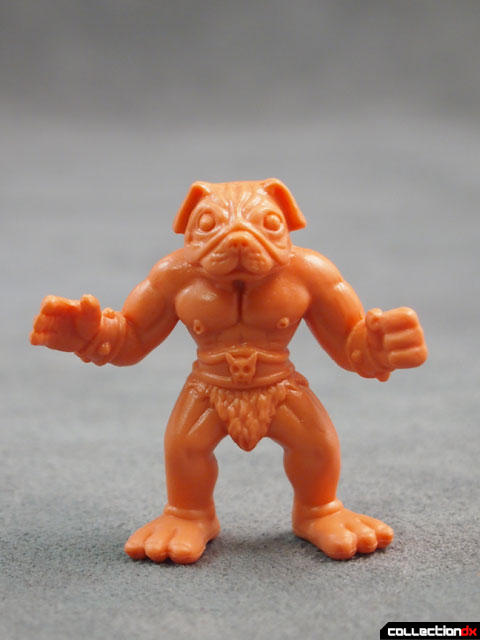 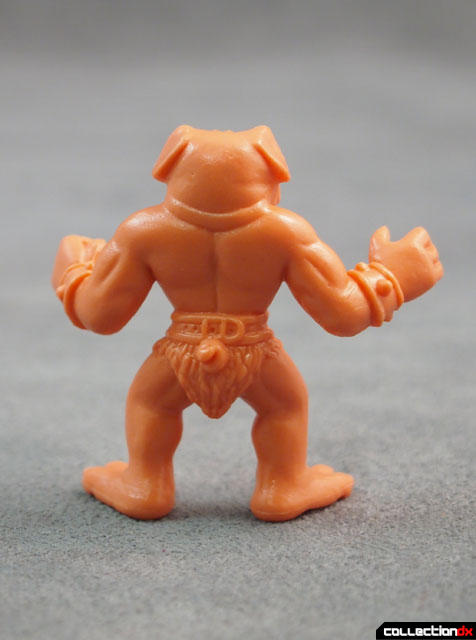 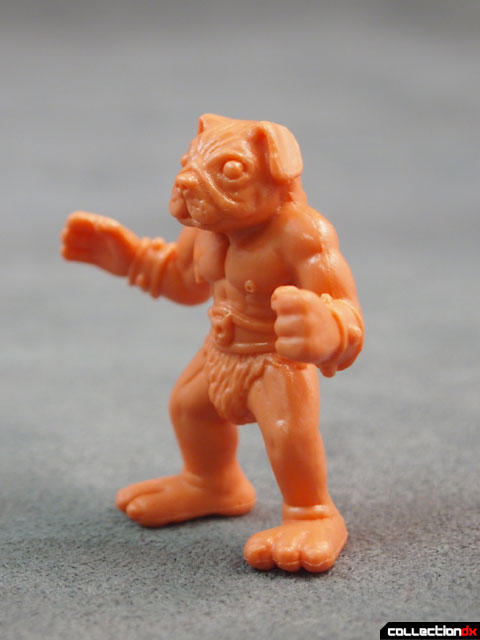 This one takes the barbarian theme and now makes it an astronaut. It works. It looks like it would be at home in the Masters of the Universe line. 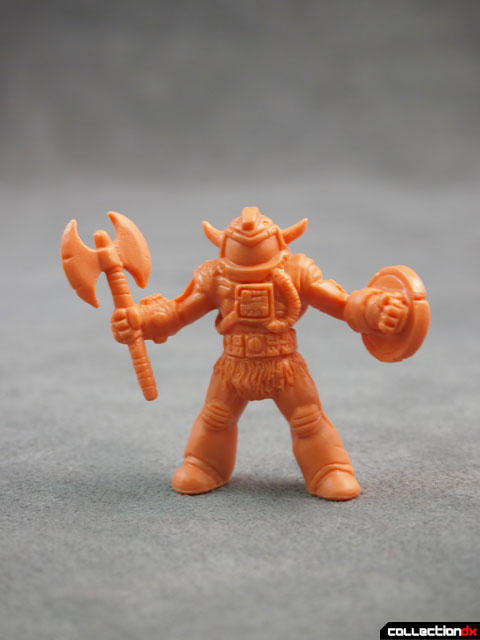 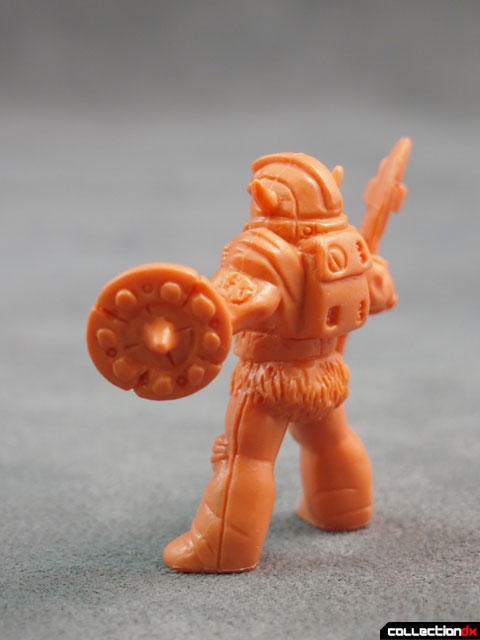 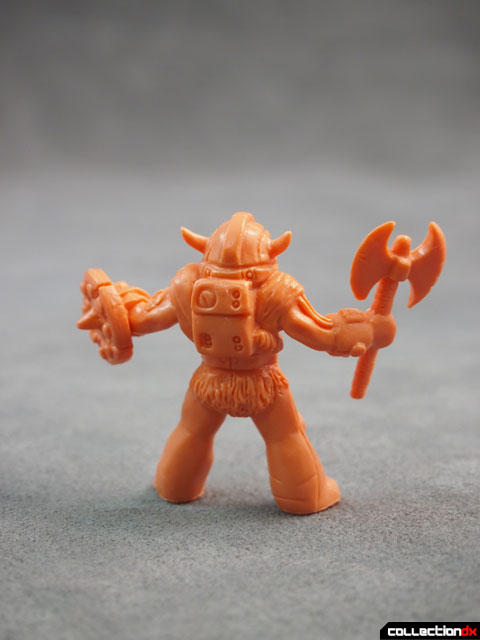 Essentially a pun in toy form, Fruit Punch is a Juice Box that has boxing gloves. It's the smallest figure in the set, and it looks like a Garbage Pail Kid come to life. 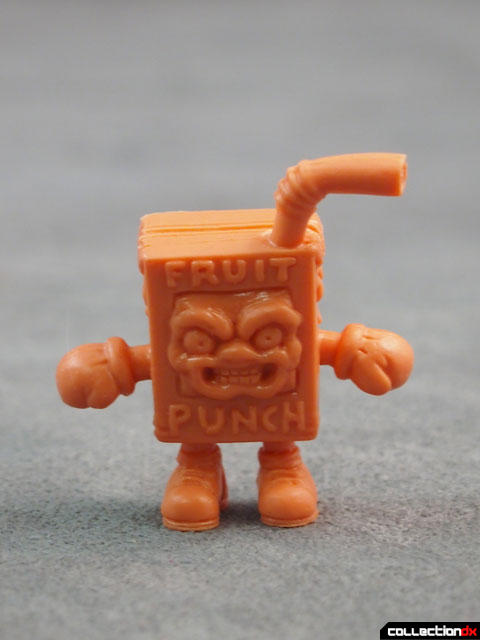 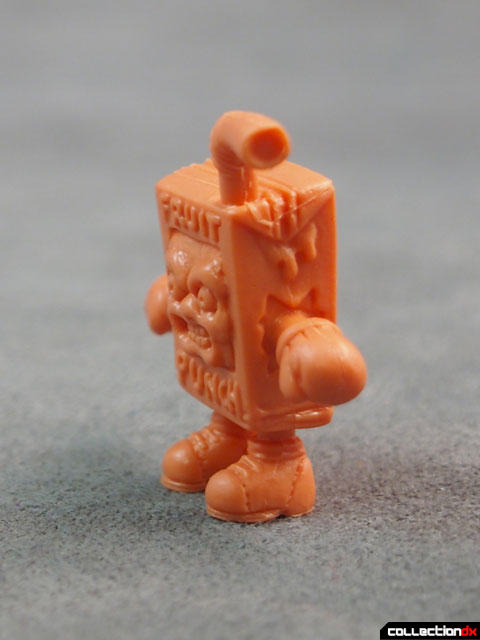 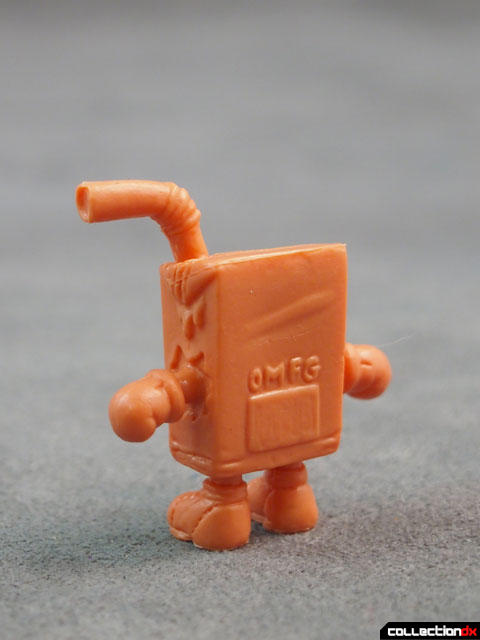 Another play on words, this is a tentacled monster breaking out of a trash can. This one is a cool design but really hard to stand up due to the peg leg. 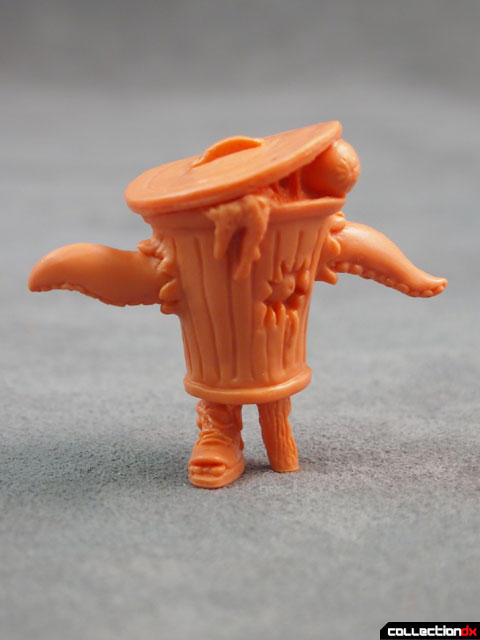 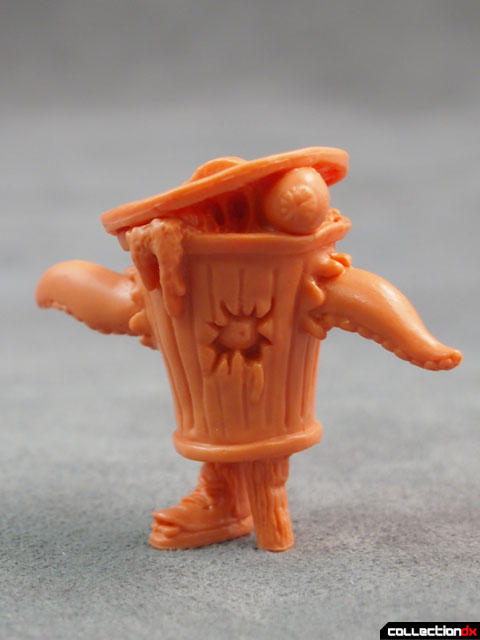 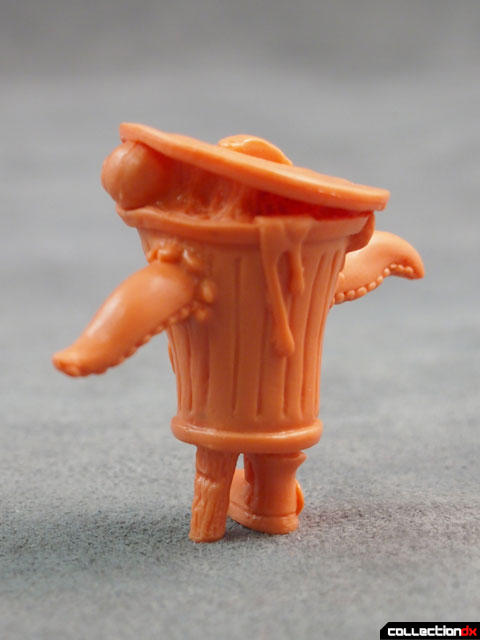 Dr. Decay is a rather cool and gruesome warrior. He's a mix of rotted skeleton and fungus, with what looks like a mushroom cap for a head. 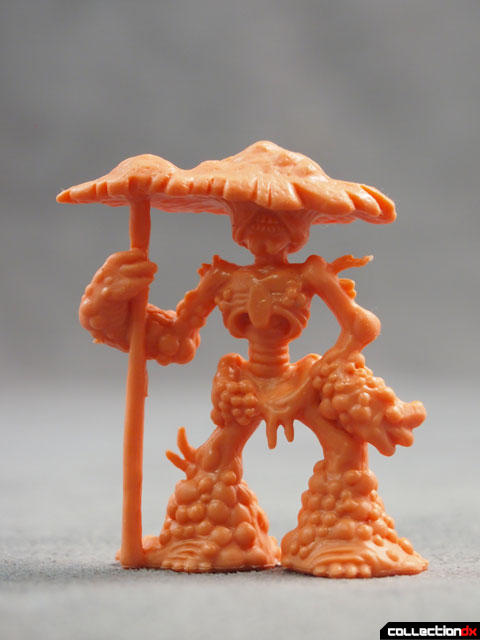 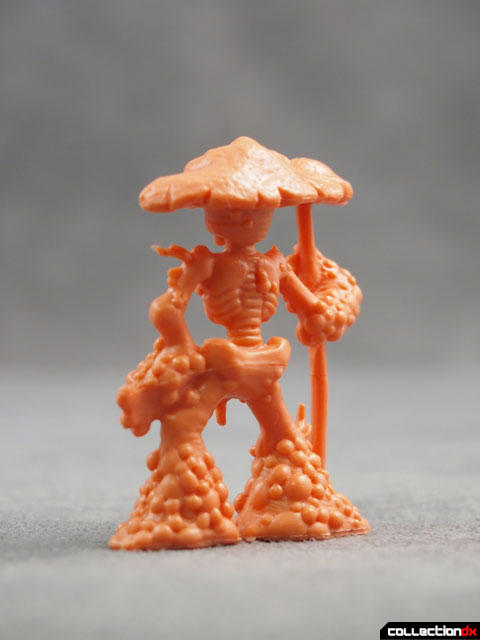 This design is near and dear to me as it is similar to an illustration I did to promote the Wraith Pheyden I did years ago. There is a common belief that underneath Pheyden's armored shell is a flesh body, with a skeletal structure not unlike our own. L’amour Supreme has created a highly detailed design that shows Pheyden in a half rotting state. 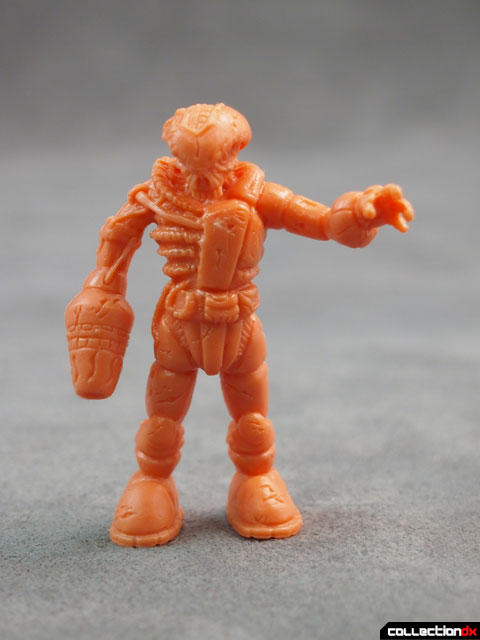 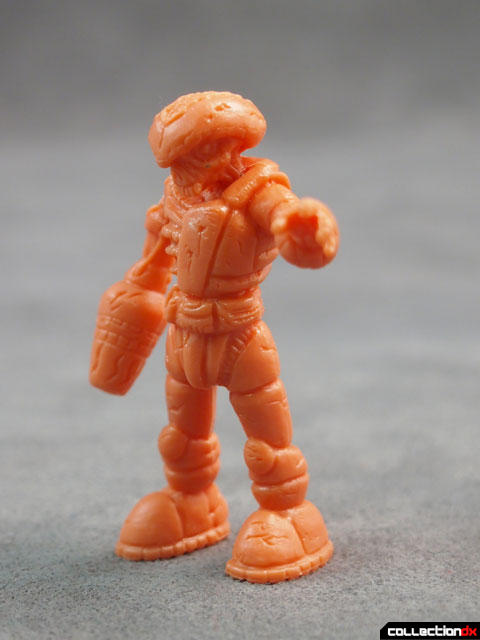 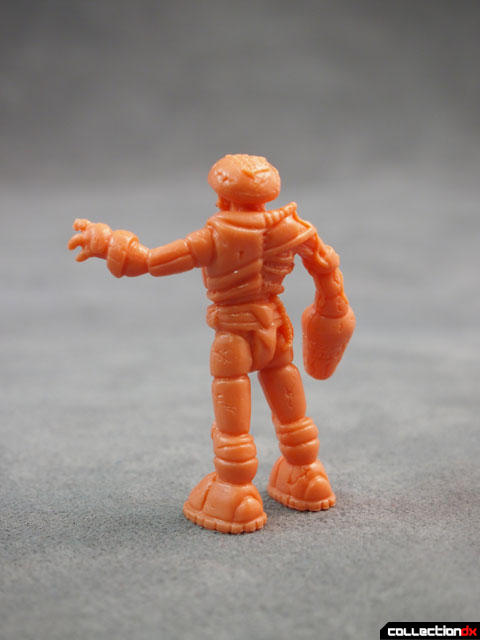 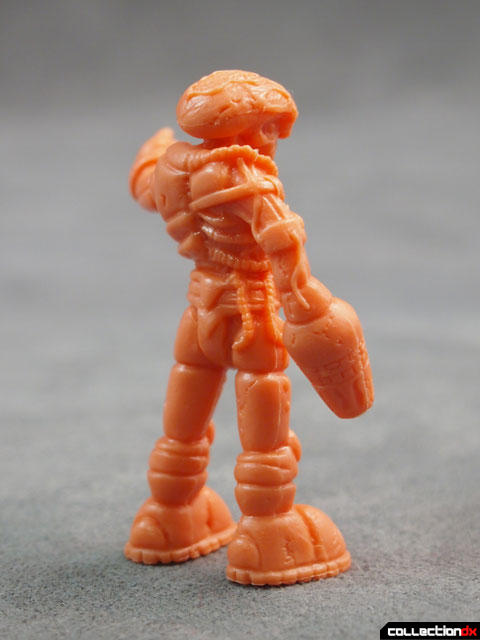 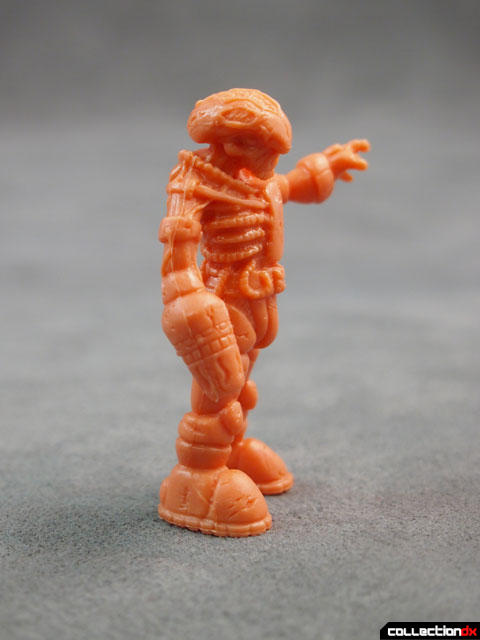 It's when you amass all three series together do you see the one major flaw of series 3. While they are all molded in a flesh color, Series 3 uses a darker, pinker color than the earlier sets. Thus, series 3 stands out when displayed with the others. 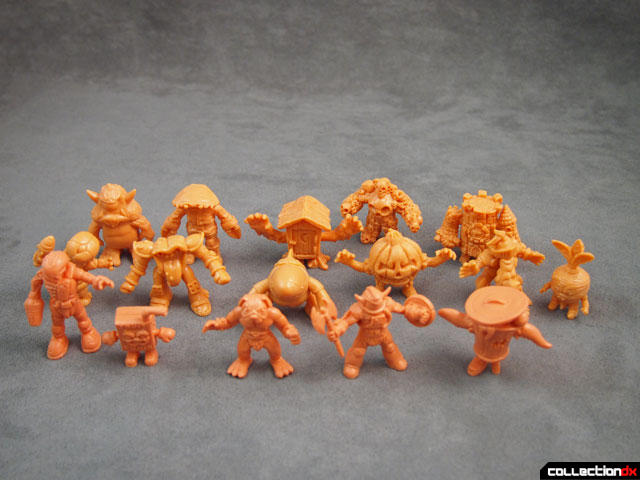 Despite the color difference, nothing beats an army of these displayed together. 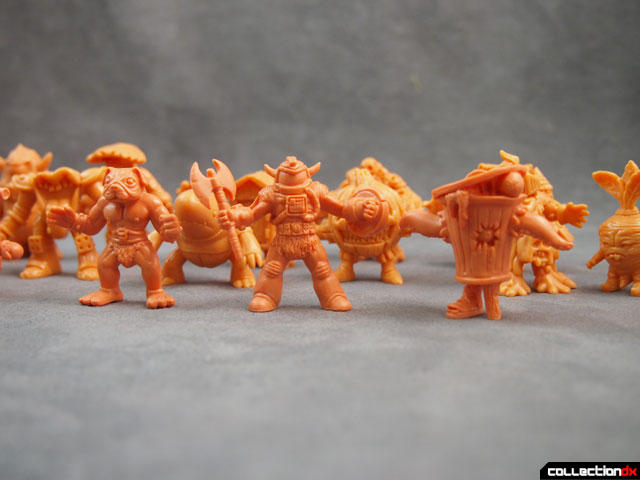 With my Kickstarter donation, I qualified for an additional set of OMFG figures cast in black. October Toys would go on and mold this set in numerous additional colors (gotta make the most of those molds you know), but for me flesh is the only way to go. 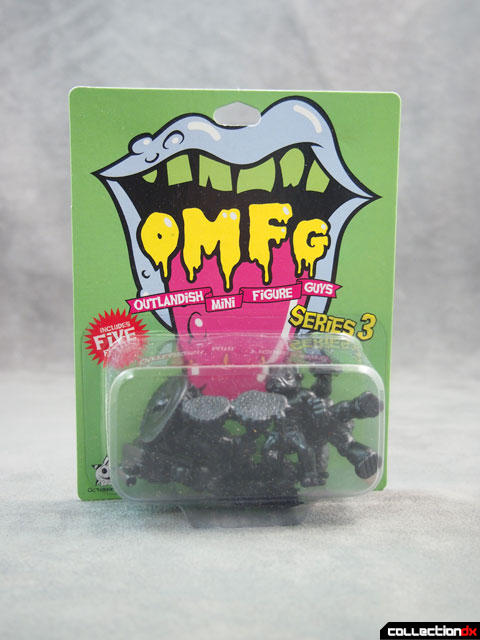 Since OMFG was first released, there has become a small trend of making little rubber guys with acronyms for names. I can understand why - they are affordable to make and the public seems to have an endless appetite for them. But I think I will just stick to this one line, in hopes that it will continue for a good while to come.

I'm actually sort of put off by the name, only because it reminds me that the days of toys made for kids is over. Dumb name. It breaks me out of enjoying this series like a kid with a stack of Garbage Pail Kids.

I thoroughly agree here. I started writing up a big rant following up on this, but I'll just say that the name will prevent me from buying these for my kids.

Toys are no longer made for kids because the product is named after an internet phrase kids use all the time...?

So you don't see a problem if a company like Schleich released a Smurfs "Oh My F*cking God" figure set in Walmart? Like that's perfectly acceptable for five year old kids?

I do have an issue with someone griping about how, "the days of toys made for kids is over" when that's definitely not true. In fact, collectible randomized figures are at an all time high these days.

Have you been to toy fair? How about Comic Con? Do you watch the CollectionDX videos with Adam's comments? Have you noticed that the bulk of Japanese toys being made are small stripper dolls with an emphasis on their breast size?

In all seriousness though, I would like to think that most toys are really still made for kids, but it's really not true anymore. Even Star Wars figures and super hero action figures are made with the adult figure collector as their target.

You do realize that's not what it stands for, right? It says so right on the package, to avoid any confusion. So the kids get the meaning as stated on package, and the adults, get the double meaning. It's a win-win.

It's your dirty mind, not mine.

Josh, I agree 100% with your take on designer/art toys! Toys are art - no need for the delineation. However, the OMFG line is a cottage industry which I can support - an interesting, well designed, high quality line which enhances the M.U.S.C.L.E. legacy. I purchased my first set just a couple of weeks ago. My kids love this style of toy and so do I! Their cutesy-creepy designs are just plain fun! These toys owe their lineage to the early Keshi Gomu capsule toys all the way. Also, the populous aspect of their design is reminiscent of how some early Kinnikuman fan designs later became production sculpts. Another similar toy line to check out is "Mystical Warriors of the Ring" - a PVC, "flesh" colored mini figure line focused on the Pro Wrestling theme.

Funny thing... not long before I came across this review, I watched that recent Futurama episode where they spoofed GI Joe, battling a COBRA like organization aptly called... A.C.R.O.N.Y.M. (A Criminal Regiment Of Nasty Young Men).

C'mon Let's not pretend what OMFG means, and it's clear out of all the acronyms in the world the producers of this toy choose it for what it's common meaning is.

I typically equate Designer toys with and older teen and adult toy phenomenon and it's clear the producers chose it for the irony or in-joke. To pretend otherwise is missing the irony/ In Joke that the people who produced the toy intended. These designers are adults and they are clearly aware what name they were choosing for this project.

This could be marketed as a kids toy but clearly the makers wanted to keep this in the Adult/older Teen market by the name they chosen for the product. I'm sure they're very comfortable with that choice.

My own opinion aside, this would make an awesome kids birthday party present but there is no way I would risk letting my kid give away a present with a name like this. The mother's in my neighborhood would not find this funny at all, and I could see many of them getting rid of it before their kid noticed what it was. I would seriously encourage these guys to consider putting out a repackaged version with a more kid / family friendly name because the price is perfect for a kid's birthday party gift.

I think it would have been more funny if they just wrote "Outlandish Mini Figure Guys" on the package and then let adults and teens figure it out for themselves.

Now that would have been funny!

I'm a big fan of Find A Grave and when referring to it online I always have to write out the entire website for obvious reasons.