Omega Rex comes from the Japanese multimedia series, Zoids Wild. Technically it's from the sequel, Zoids Wild Zero, appearing later on in the series. Zoids Wild is the latest series in the Zoids canon as of 2020. I haven't seen the anime, but with Zoids, you really don't need to. It's a robotic T-Rex with armor, what more do you need to know? Oh yeah, did I mention it walks and lights up? Watch it in action below.

Omega Rex appears courtesy of HobbyLink Japan. Get yours here!

The box is large, and made out of a very sturdy heavy cardboard. 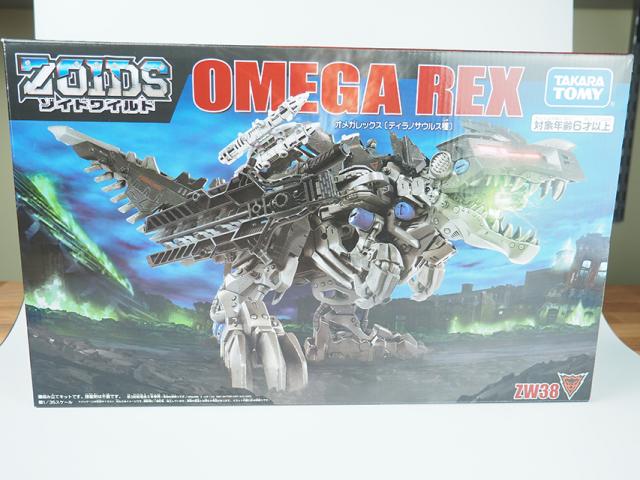 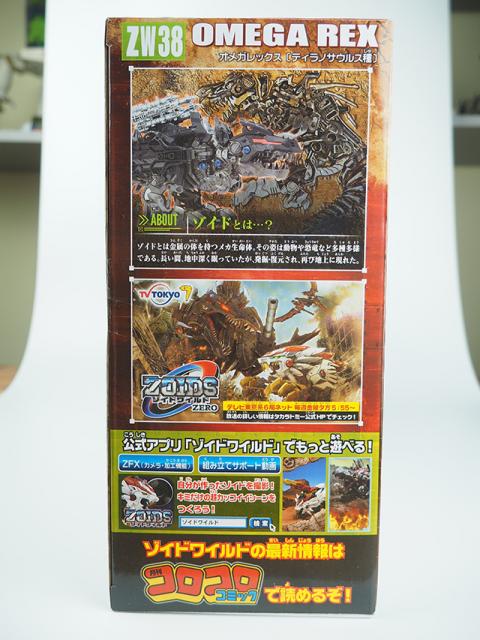 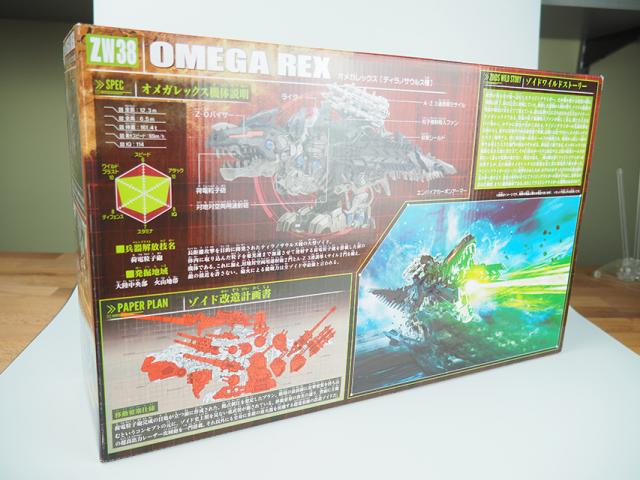 Inside, there's a cardboard tray, with most of the parts in baggies. The center section of the Zoid is sectioned off into its own compartment. It kind of reminds me of the old Takara Dual Model packaging. 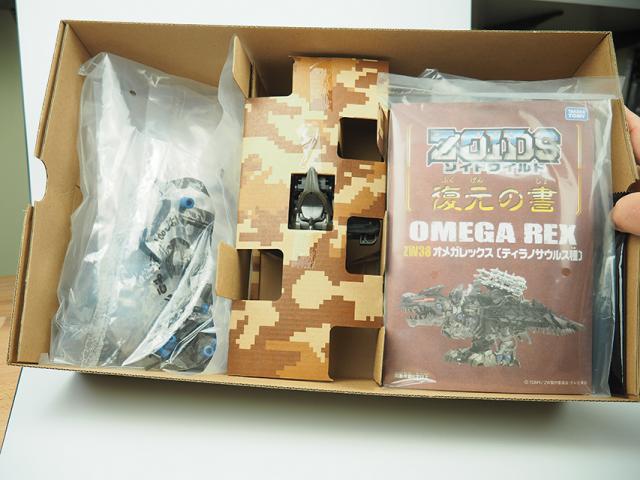 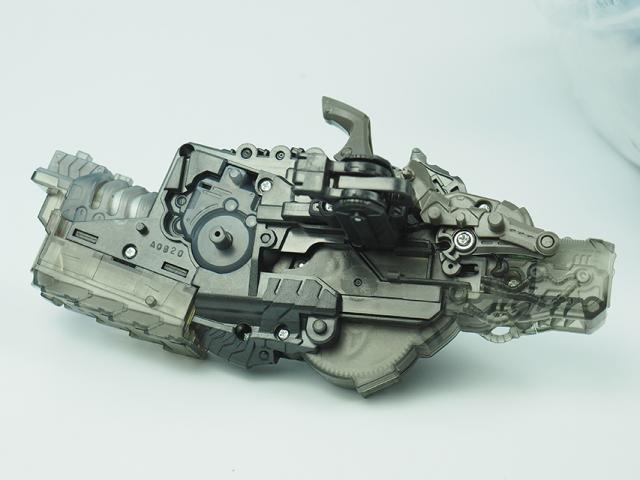 The components are sorted into large lettered bags, and then in those bags are smaller bags labeled 1-4, but marked with tiger stripes. It's a nice detail that brings you into the world. For the initial release, there is an additional black bag that comes with a random bonus weapon. 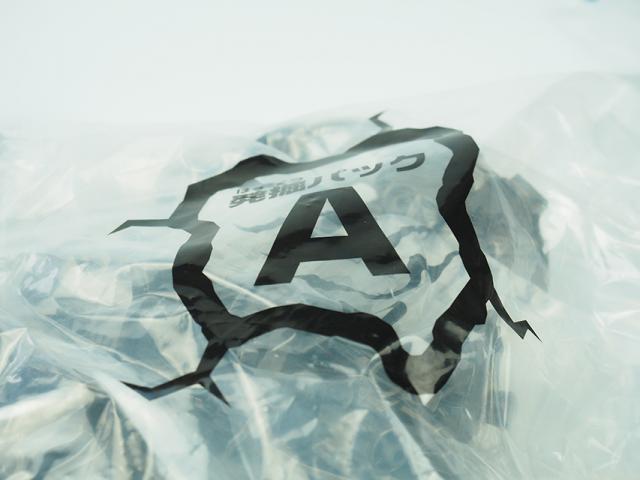 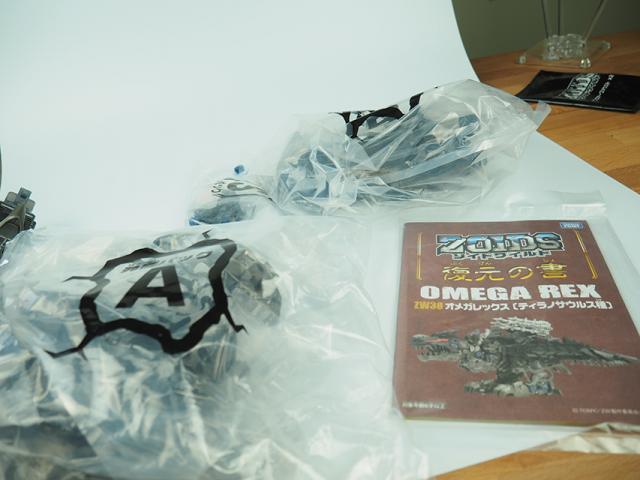 There are no sprues to cut, so assembly is pretty easy. You start by adding the functional mechanisms to the base body, and then you layer the armor parts over it. The parts are then locked in place with the iconic rubber polycaps that Zoids are known for. I had a few small problems with the assembly. For one, the bottom fin on the back would not stay on - the slightest touch knocked it off, and you have to remove the other two to re-attach it. I finally had to just press it on harder, and it seems to have stayed. Also, I searched for one part for about 30 minutes until I found it wedged in the cavity of another part. So, if you are missing a part, look inside the other parts.

Below is the core Zoid without the armor. It displays well on it's own. In a few of the photos I forgot to add the eyes, but they are there. 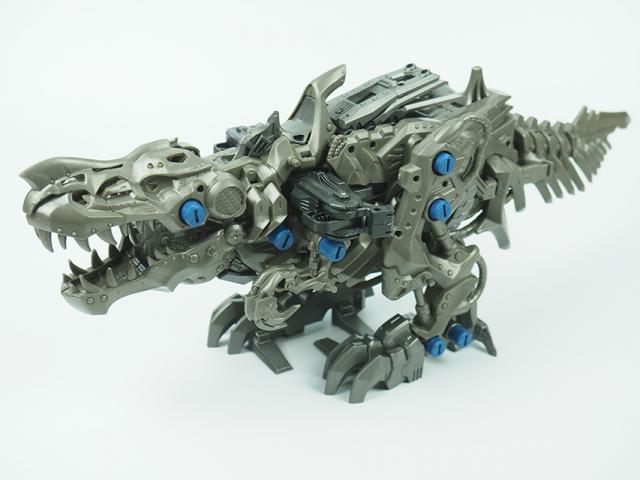 It almost has a Transformers Movie Grimlock feel to it in this mode. 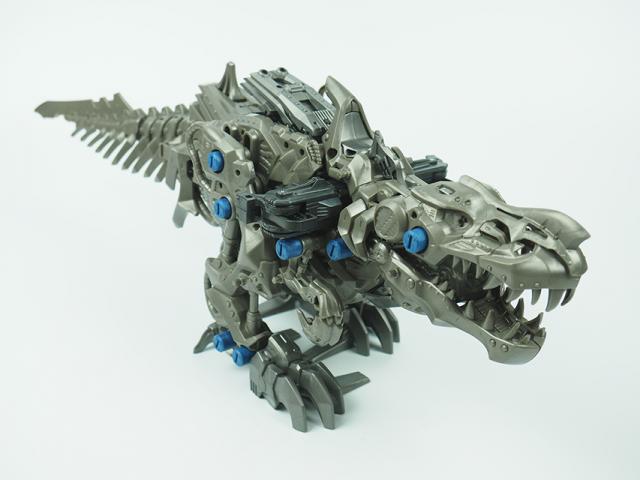 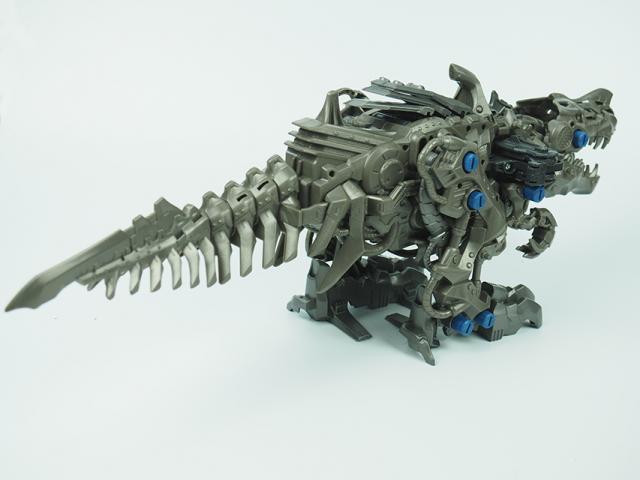 Fully assembled he comes in at 17" long and weighs 1.5 pounds. It's a significant toy. 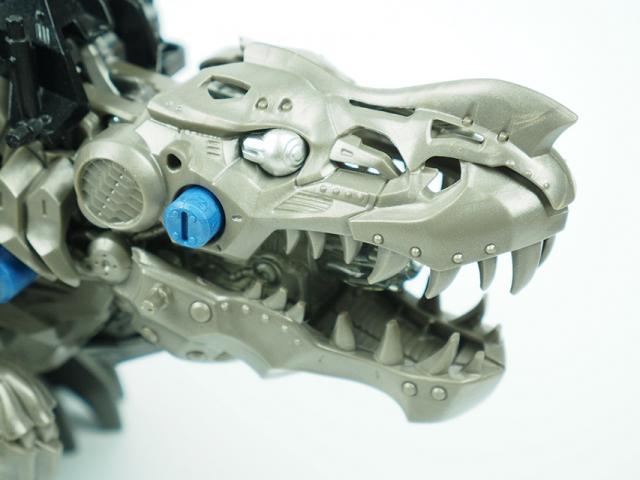 Adding the armor really brings the piece to life.  The armor adds a ton of connection points to which you can use any of the weapons from any of the other Zoids wild sets. Not including the connecting points on the weapons, I counted 48 different pegs and 8 holes for weapon attachments. 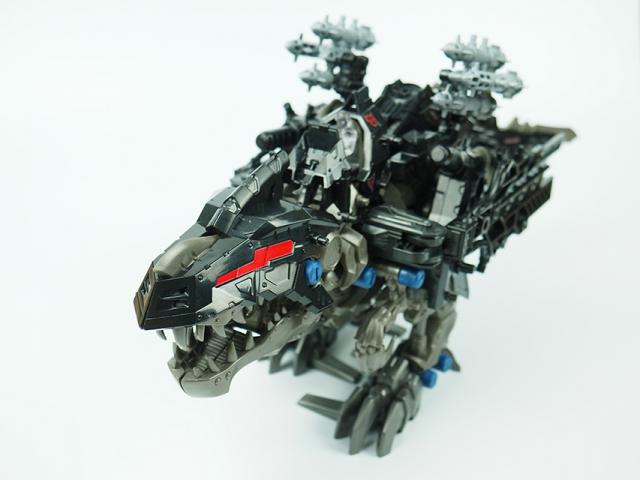 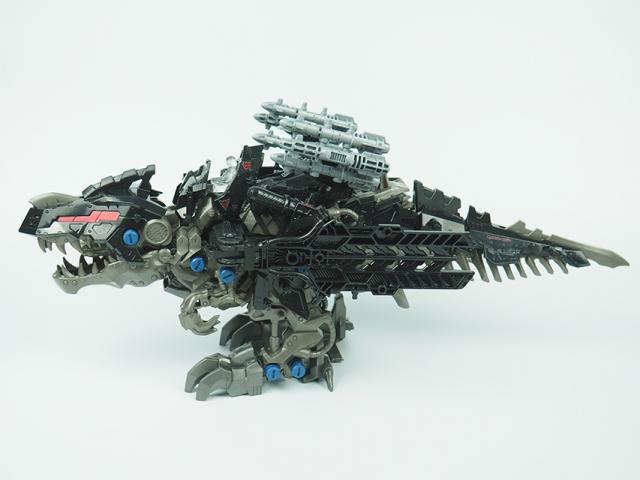 The classic Zoids had little chrome pilots in cockpits. Here the pilots are about 3 times the size, and they are now clear. 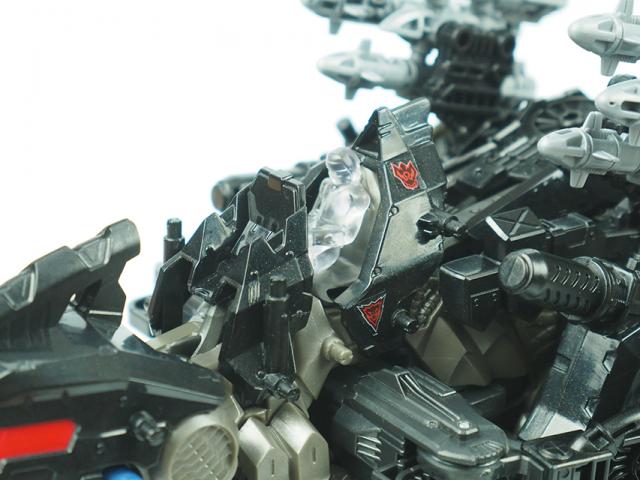 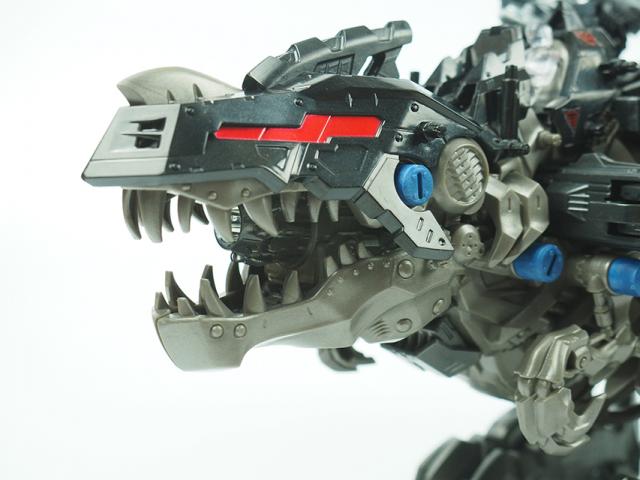 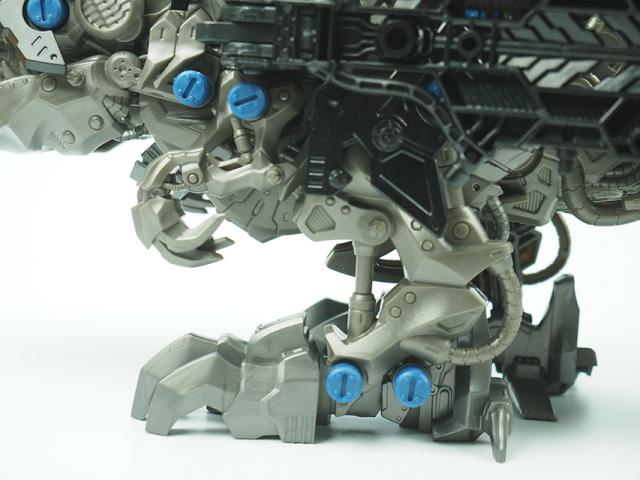 Six non-launching missiles, called A-Z Triple-Guided Missile (A-Z3連誘導ミサイル) can be attached to the back, or anywhere else really. 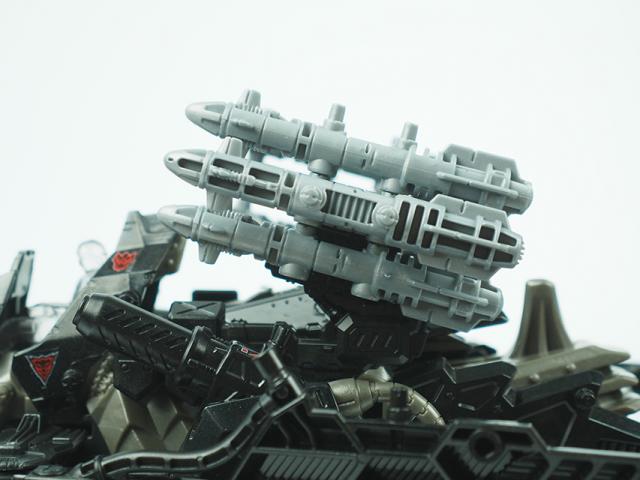 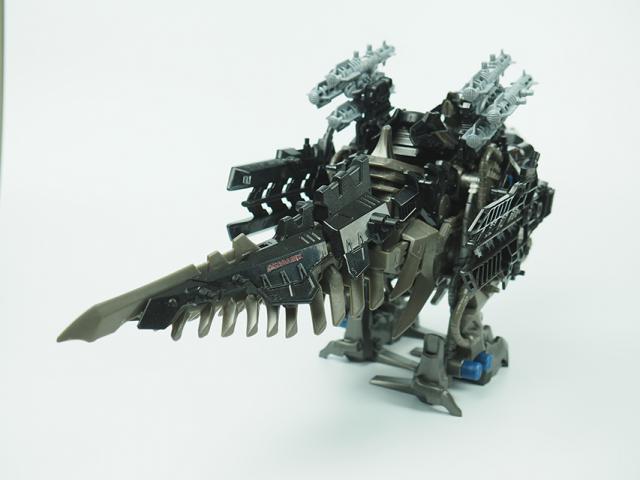 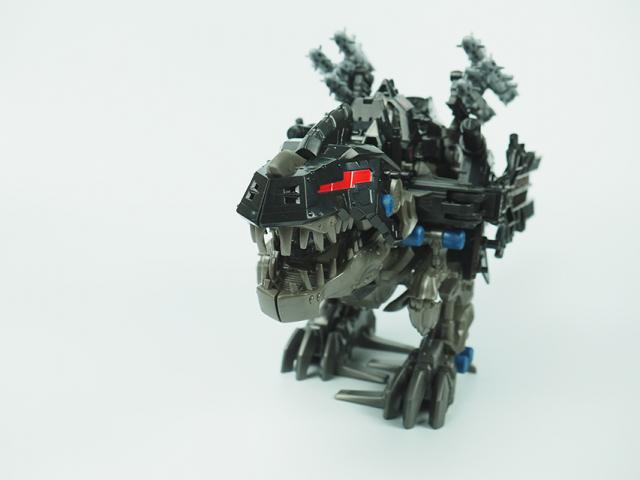 To activate Omega Rex, move the switch on his back forward. This is assuming you added the 2 AA batteries in the compartment underneath. Omega Rex will begin to walk, his tail swaying behind. After a certain amount of steps he stops. His back fins begin to raise and his jaw will open. At the same time, the fins on the side will swing around to the front and the green light in his mouth with turn on and start spinning. This repeats three times, with the last time the mouth staying open longer. Omega Rex then starts to move again, repeating the cycle. 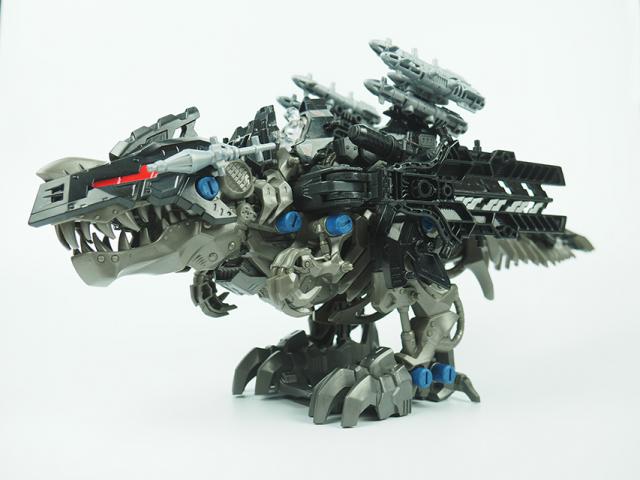 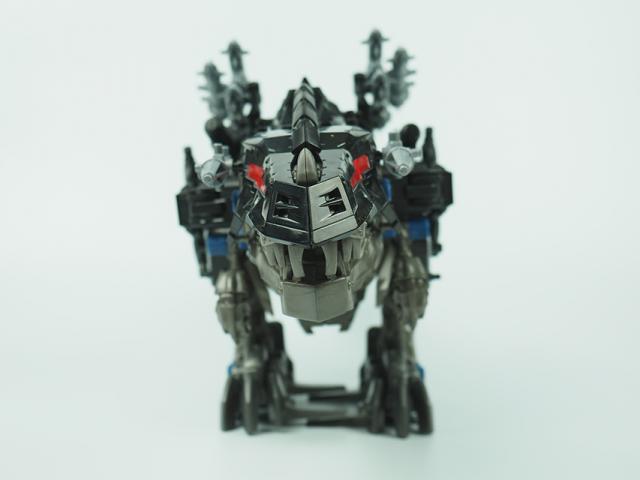 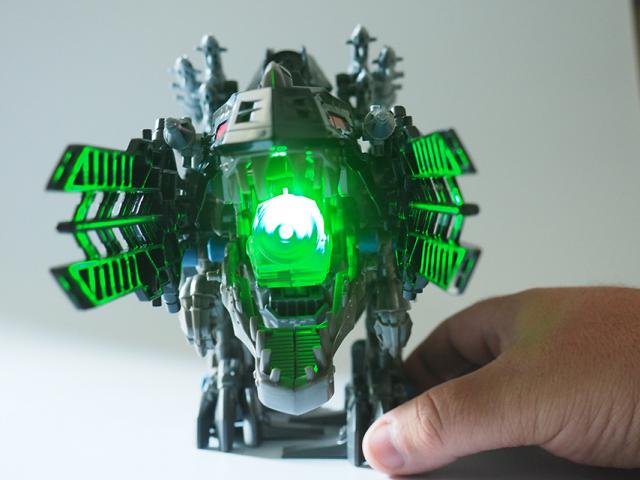 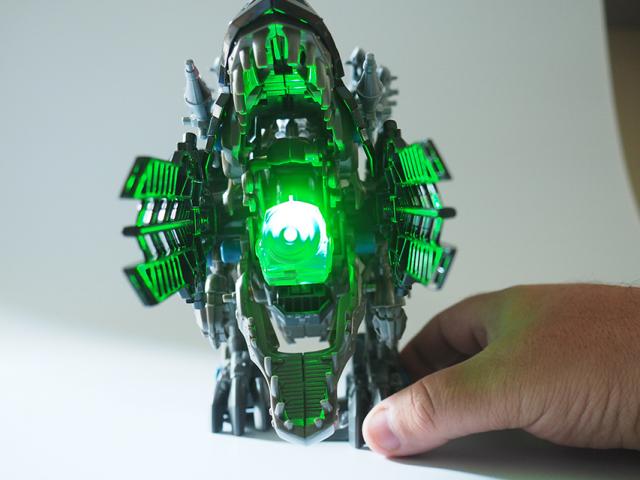 For a limited time, Omega Rex includes a set of bonus weapons. There are three different sets, but they are randomly packed. I got what look like mortar launchers. I've attached them to the side of the head. 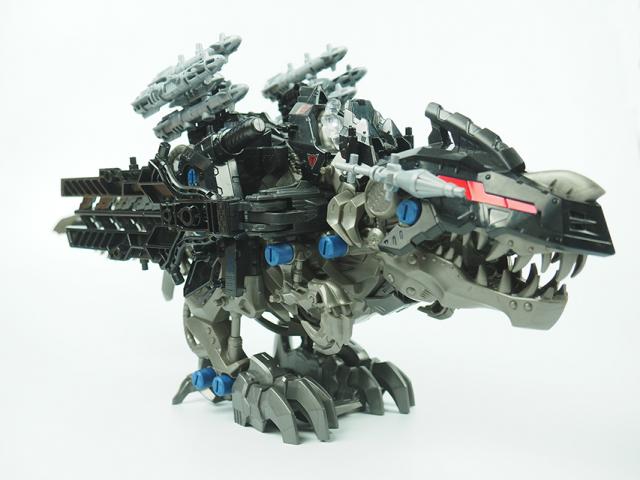 I've had Zoids before, but I was really surprised at how much I liked this piece. It's big, hefty, and has an amazing play feature. Not to mention the fun of putting it together!

You can get your Zoids Wild Omega Rex at HobbyLink Japan!