Head over there for your Power Rangers Samurai needs!

The OctoZord is one of the Gold Samurai Ranger’s folding Zords. Although the “Octo” part of the name implies that the Zord is an octopus, it is actually a different type of marine animal. In Shinkenger is it referred to as the Ika Origami, which means Squid Folding God.  So the US version should have been called the SquidZord, but it wasn’t.

The ZordBuilder OcotZord is a scaled-down and re-engineered version of the DX toy from the Shinkenger line. While it may not be the same as its Japanese counterpart, it is still a decent rendition of the Gold Samurai Ranger’s squid Zord. 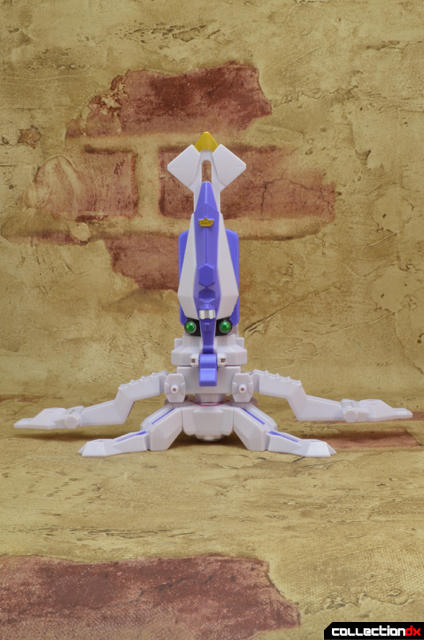 The back of the Zord looks drastically different from its Japanese counterpart thanks to several differences. 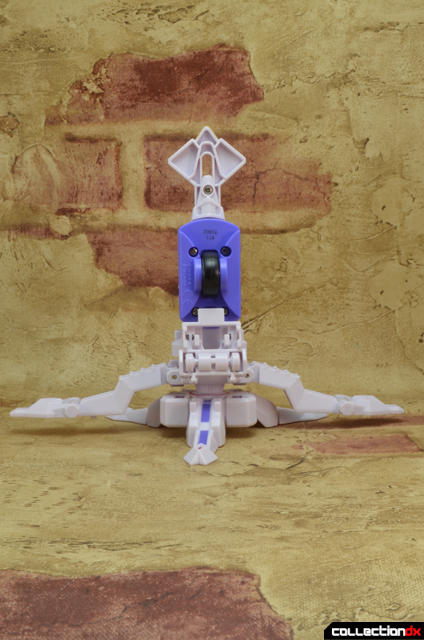 Also, there are three wheels on the back of the Zord, which allow it to roll around. One of the gimmicks of this toy is that the big wheel on the backside of the squid will cause the bottom three tentacles to spin. 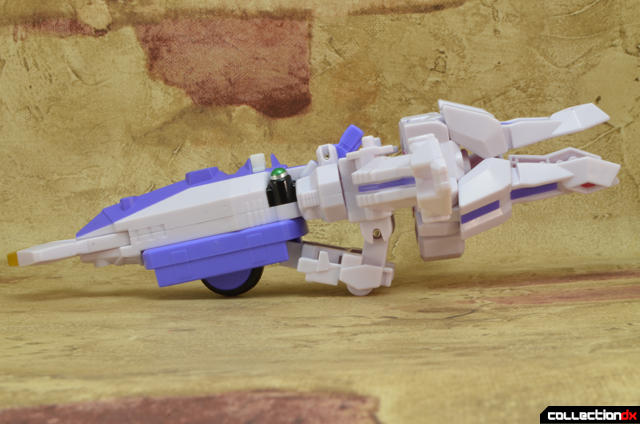 Articulation: The OctoZord has some. 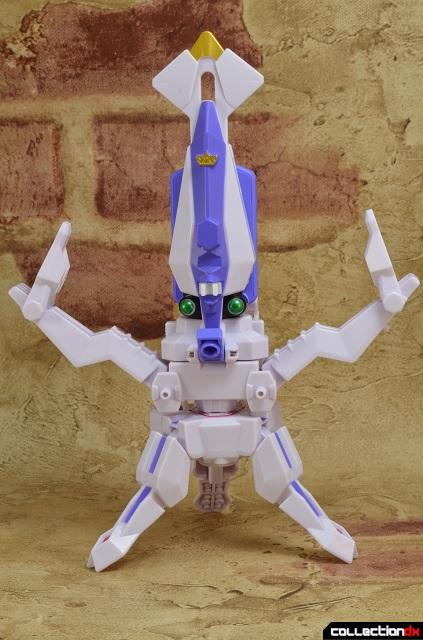 All five of the Squids tentacles move on their hinge joints.  The top two tentacles have an extra hinge at the top of the tentacle. This allows the tips of the tentacles to move up. The panel with the wheels, which is on the back of the Zord, also moves to aid the different combinations of this Zord.

In Power Rangers Samurai, the Rangers need to transform into their Mega forms in order to gain access to their Zords. As an added-value feature for auxiliary Zords in the line, Bandai of America has decided to include a Mega Rangers. 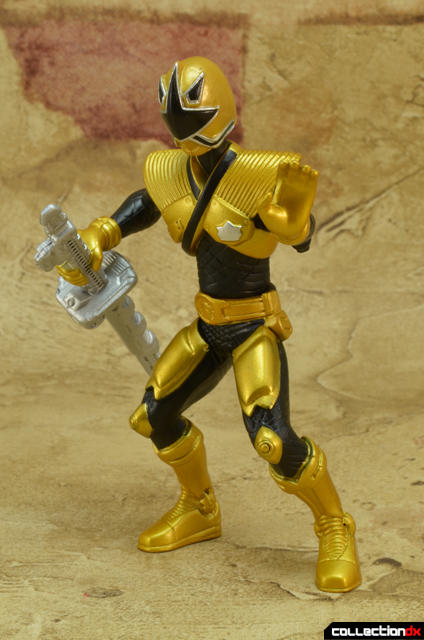 Standing at about 3 3/4 inches tall, the Mega Gold Samurai Ranger looks pretty okay for the add-on that it is. The paint applications are not bad considering the scale and price point of this set. It looks better than those expensive Matty Collector Voltron Pilots. 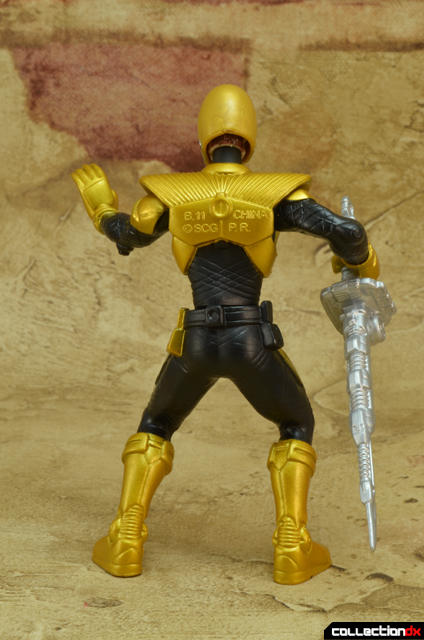 Even though the Mega Blade may lack paint apps, it has some nice detail on it. 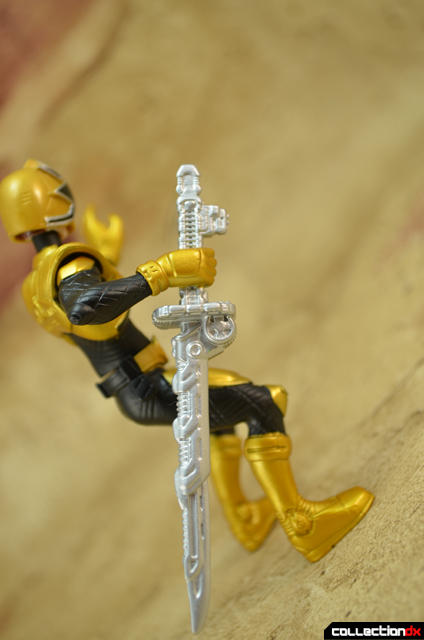 The Mega Gold Ranger has one point of articulation at the right wrist. It can rotate about 200 degree. 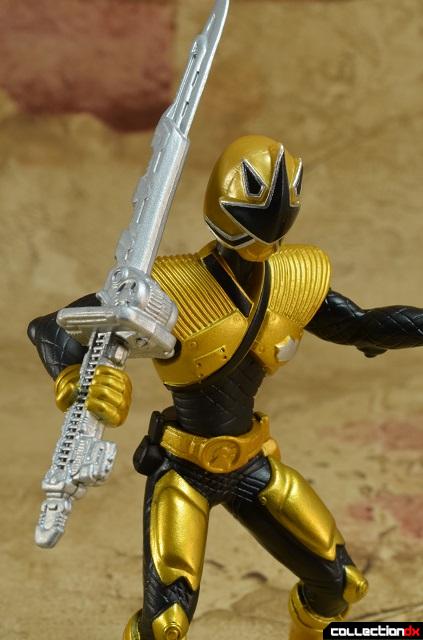 Another of the features of the Mega Gold Samurai Ranger is that you can remove the helmet to reveal the comically-sculpted head of Antonio underneath. 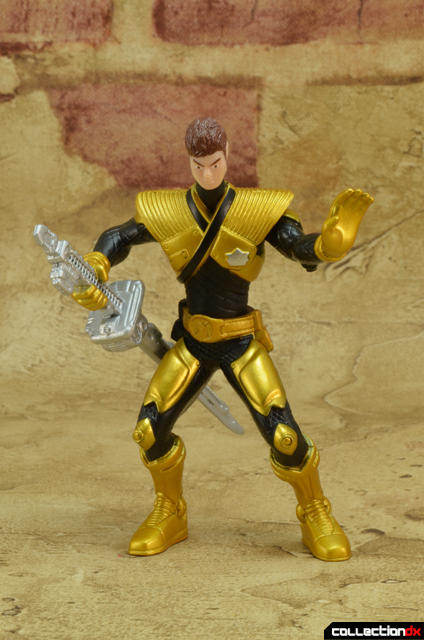 These remind me of the heads of the characters in the Shouchaku Henshin line, which also feature removable helmets. In both lines, the helmets are made to be in scale with the rest of the figure, so the head of the figures are sculpted a size or two smaller to allow the helmet to fit over them. To be fair though, at least the heads on the Mega Samurai Rangers are not as disproportionate as the ones in the Shochaku Henshin line. Those heads looked like sculpted and painted pencil erasers.

The final feature of the Gold Samurai Ranger is that it can ride atop the OctoZord, while it is doing its vehicle thing. 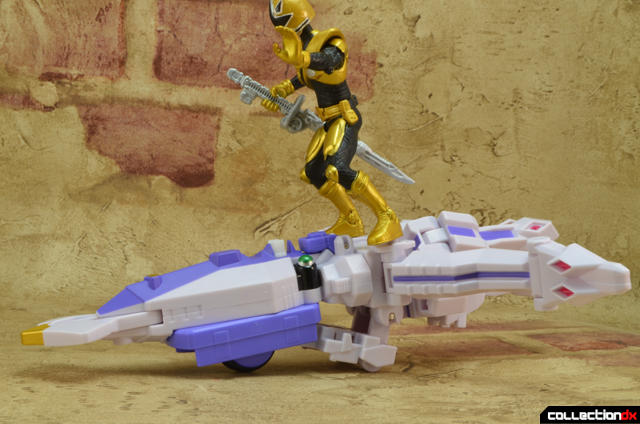 Enough about the Gold Ranger and let’s get back to the OctoZord, which can combine with both the Samurai MegaZord and the Samurai ClawZord.

When OctoZord joins forces with the Samurai Megazord,  it becomes the Octo Spear MegaZord. 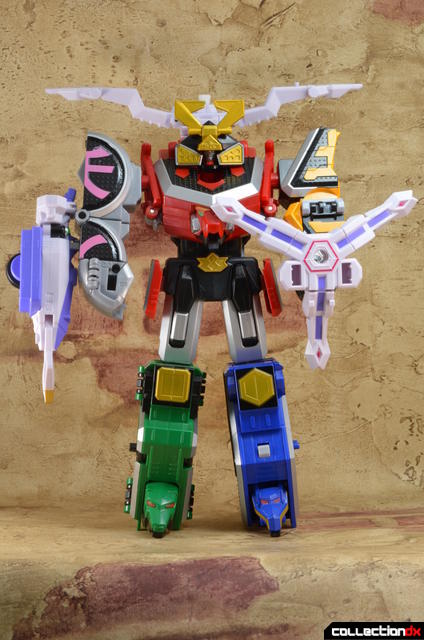 In this form, the OctoZord functions a shield, spear and tentacle ornament for the back of the Samurai MegaZord. 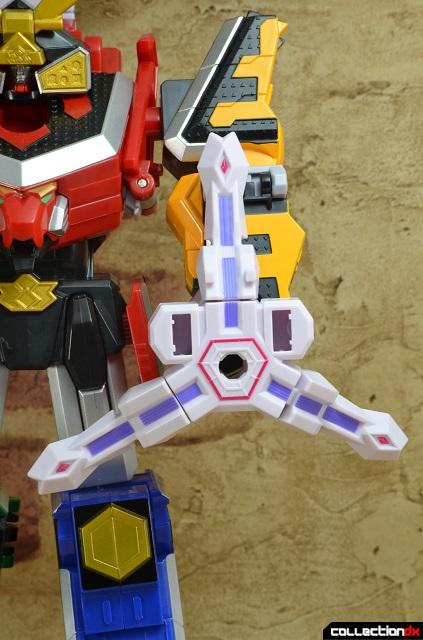 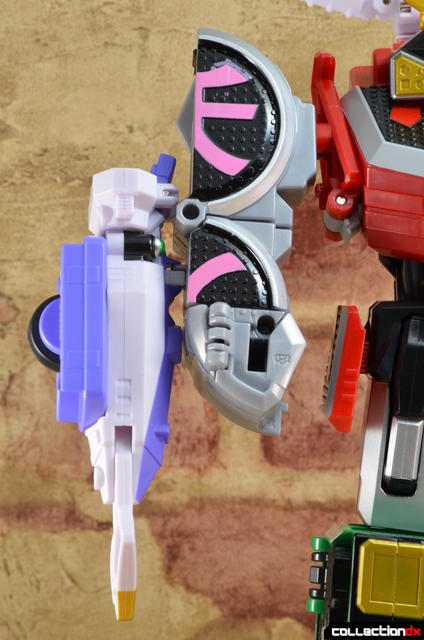 To become more spear-like, the top of the Octozord's head extends out to become the tip of the spear. 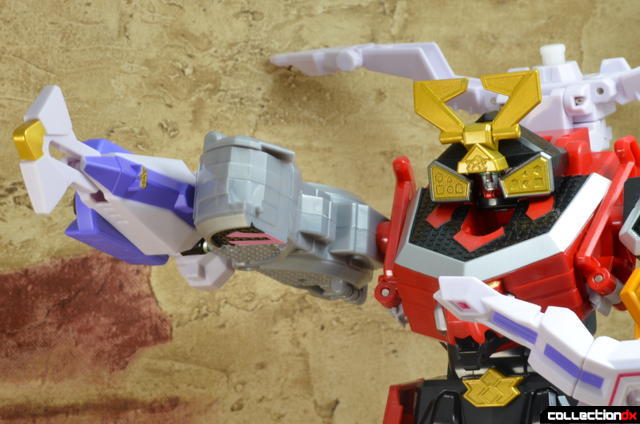 The bottom tentacles attach to a hidden panel that extends out of the back of the Megazord. 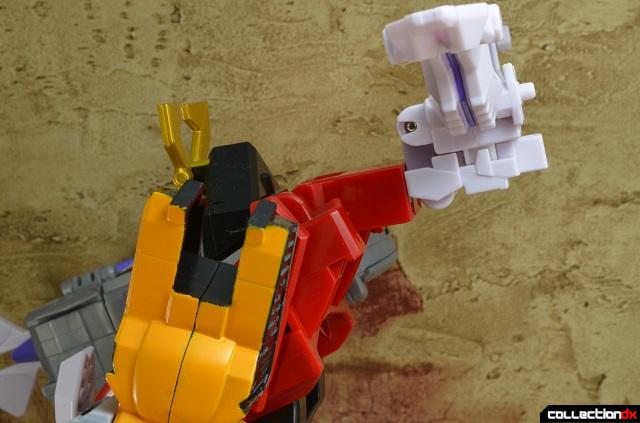 However, all three components are much smaller than they should be, which makes the Octo Spear MegaZord seem a lot less intimidating that its Japanese counterpart.

You can also combine the OctoZord with the other Zord of the Gold Ranger, the Samurai ClawZord, to form the Claw BattleZord North. 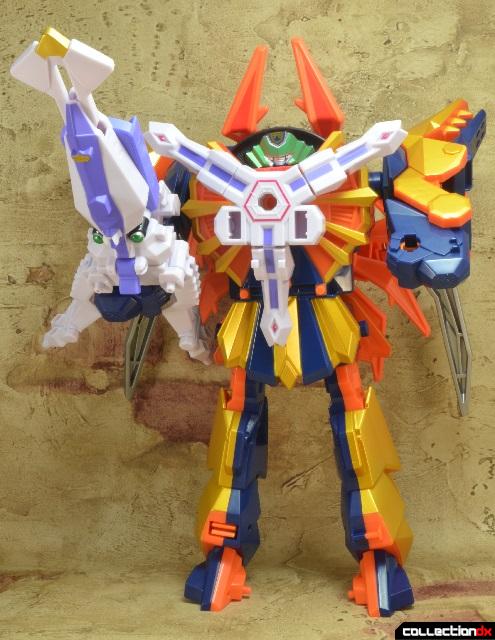 Like the other auxiliary Zords, the Octozord also comes with a cardboard piece-together version of itself. It is pretty flimsy and doesn't even stand on its own. But no biggie, since this is throwaway extra anyways. 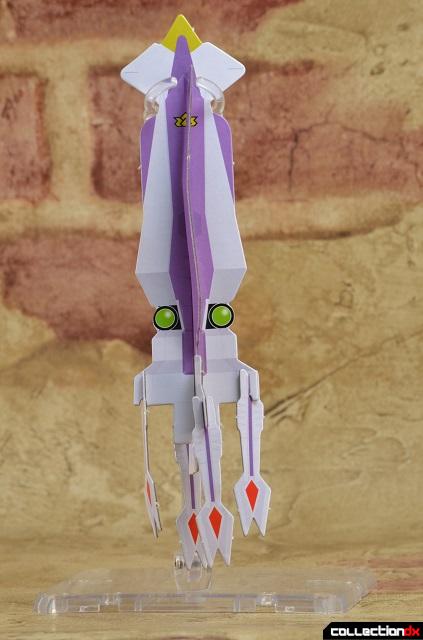 The Ika Origami is one of my favorite mechas from Shinkenger. 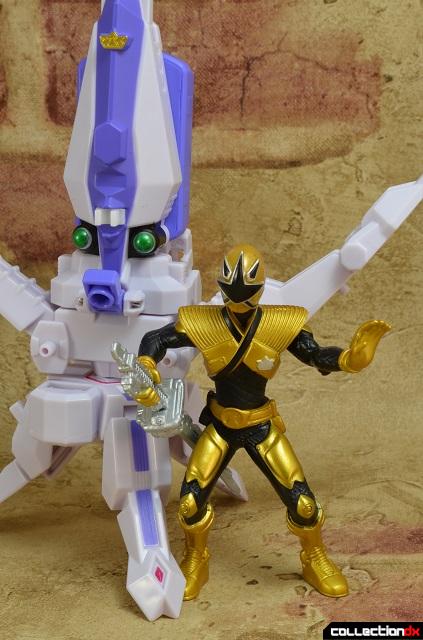 Therefore, I have been meaning to get my hands on the Japanese version. Since the OctoZord manages to look charming in its squid form, I can hold off a bit longer on getting Japanese version.

Head over there for your Power Rangers Samurai needs!