Obi-Wan’s starfighter is destroyed when he and Anakin rescue Chancellor Palpatine from the Separatists. So when he is sent to Utapau to confront General Grievous, the leader of the Separatist droid army, Obi-Wan requisitions a new fighter for the mission. He leaves Coruscant aboard a Republic attack cruiser, then departs from the cruiser in the starfighter. He uses a hyperspace ring to reach Utapau, not knowing how this mission will end…but all too aware of Grievous’ deadly skill with a lightsaber.

Obi Wan's starfighter comes in the nicely illustrated 30th anniversary box as shown below. I actually really like this packaging. The reason I like this box is because of the designers choice to use a dynamic action illustration of the craft coupled with the pilots face in the right corner. In my opinion this combination seems to complement one another.

The ship right out of the box requires no assembly and is made from nice quality plastic. Obi Wan's Starfighter differs from others in this line because it has tons of tiny, hard to apply stickers. Unlike Anakin Skywalker's that had all details already applied by the manufacturer. This is still a great relief considering that Aayla Secura's Starfighter had none. Where is the consistency Hasbro?

The next 5 photos show you a quick walk around of the ship. Some of the highlights I would like to point out are the retractable landing gear, removable R2 unit, firing missiles with release button located on the rear portion of the wing. Also, note the great weathering detail and how the front of the cockpit bears a very strong resemblance to a TIE fighter. 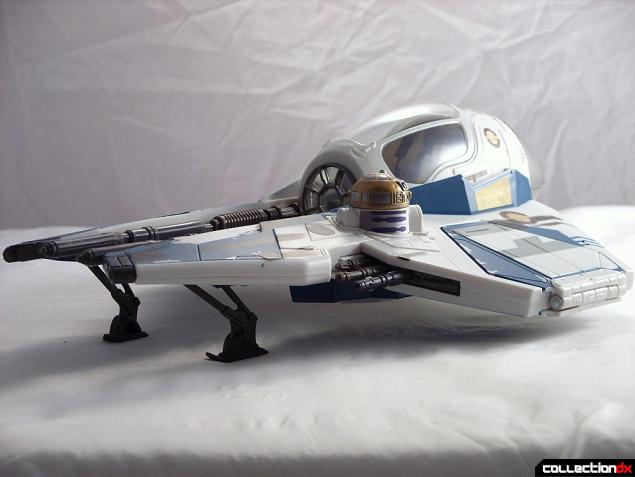 The next 2 photos show the Starfighter with the wings open. The wings are spring loaded are actuated with a lever located at the rear underside of the cockpit. With the wings open you can really see this ships obvious relation to the TIE fighter.

The last photo shows you the canopy open, allowing a view of the nicely appointed cockpit of this small starfighter. All the details are stickers and were actually pretty difficult to apply.

After all the above being said I must say that I like this ship. I think its a very cool design that lends to the history of the TIE fighters lineage. The only thing that I feel is bad about this ship is that Hasbro has made a repaint for almost every Knight in the Jedi order. The "bad" part about this is that each ship has virtually no difference from another. You can see this in the review of Anakin Skywalker's and Aayla Secura's Jedi Starfighters. My advice is just to buy one. To make your choice easier, pick one that is piloted by your favorite character or is your favorite color scheme unless your a completest or have tons of disposable income.