O.B.I.T. and The Man Who Was Never Born

The final piece of my Sideshow Outer Limits collection finally arrived recently from the good folks at Amok Time. This one is a two-piece set featuring characters from two different episodes of the show: "O.B.I.T." and "The Man Who Was Never Born". I do not know why the decision was made to combine these two into one package, as the episodes do not seem to have much to do with one another, but regardless, this seems to be the toughest figures from the Outer Limits series to get.

Since the box contains two full 12" figures, the packaging is necessarily different from the others in the line, and in my opinion suffers slightly for it. At approximately 14"x14"x3.5" in size, the box is still somewhat compact for the contents, but has two opening flaps instead of the traditional one. The two flaps create a small gap running down the center of the cover image, which I find to be a bit distracting, especially when it runs through the lettering in "The Outer Limits".

That logo, however, is repeated on the interior of the box so that if you open only one side, the second layer completes the missing parts from the now removed outer lid: a nice, thoughtful touch. 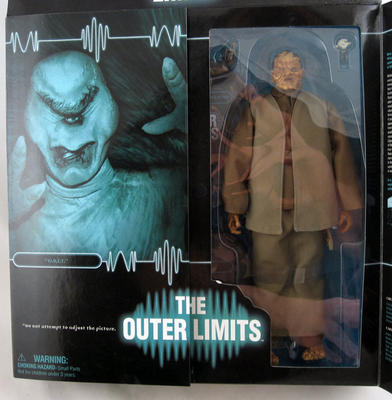 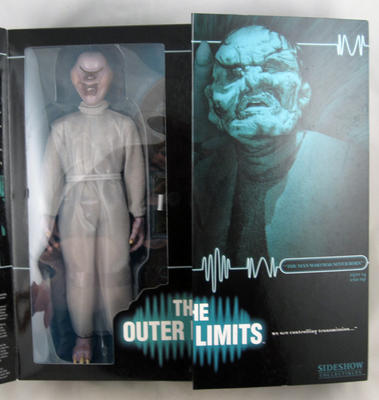 Now, with both lids open, each figure is visible inside a clear vacuformed plastic tray, along with the included accessories. Resting beneath the figures are the included stands, one for each figure, and each one labeled with the episode name and character name sandwiched around the show name.

As expected from my previous experience with other figures in this line, an episode synopsis, cast, credits, and production notes are printed on the interior of the lids.

I will start by talking about the character from "The Man Who Was Never Born", Andro, because I consider it not only the better of the two figures included, but also the superior episode of the two.

Andro is a man from the future where the Earth has been devastated by an alien bacterium that was developed by a man in the present (the air date for this show was October 23, 1963). Andro himself is severely misshapen and grotesque in appearance, yet somehow has acquired the ability to hypnotize people into seeing him in another, more pleasant form. After managing to travel back in time, he attempts to prevent the birth of the man who would cause the widespread devastation, with predictable results.

The figure is well sculpted and looks very much the way the character did in the show, nearly exactly, in fact.

Besides the head, the only other parts that are unique to the figure are the feet and hands. The sculpt on these is also quite satisfactory, although as Sideshow often does, they did not sculpt the hands so that it can actually hold the included accessories (a gun, a flower, and a book). Although the right hand appears to be shaped to hold the gun (there is a trigger finger), it cannot. In trying to get the gun into the hand of the toy, the fingers broke off! I've re-attached them with Super Glue, but it shouldn't happen in the first place. As a result, my love/hate relationship with Sideshow continues. Anyway, back into the box for these accessories...

The flower can rest in his hand, but will fall at the slightest movement.

This is as close as the gun gets to being held in his hand.

As you can see above, the mismatched skin tone is again evident here, but the clothing is long enough to disguise it in most poses. It's only when you see the arms from a low angle that it becomes a problem. Speaking of the clothing, it's well made, accurate, and adds great depth to the presentation. This figure is a great representation of Andro, but the useless accessories, to say nothing of the now broken hand, make me want to do a little time traveling of my own.

THE MAN WHO WAS NEVER BORN

The second figure in this set is from the episode "O.B.I.T." (short for "Outer Band Individuated Teletracer"), which concerns a device that is able to track and spy on any person within a 500 mile radius and the effect that such a machine has on the people at the military base it is located on, especially when it picks up an image of a monster. Although not specifically stated in the episode, this monster is called a "Helosian", as it is from the planet Helos. Naturally, this creature is the subject of the second figure in this set.

This figure is also remarkably accurate in its depiction of the creature from the show, and suffers from none of the problems that Andro does. Perosnally, I find the character less interesting, and as a result, I tend to like Ando better, despite his flaws.

The Helosian has a very funky costume to compliment the already superlative sculpt. A glittery cloth undergarment is augmented by a clear plastic covering with a belt around the waist. While not especially intricate, it sure is indicative of the style of classic 1960s science fiction monsters. He gets no accessories, but there's really nothing from the episode that would have been appropriate anyway.

These figures are long sold out, but Amok Time does buy old toys so it's never a bad idea to check there and see what they may have in stock. I was pleasantly surprised to see these guys in their inventory and you might find something of interest as well.

4 comments posted
Horizontal and the Vertical

Pretty cool set. This is the kind of stuff that makes me upset I don't collect 12 inch figures.

If the hand can't hold that stuff that comes with it, why buy it? Try harder, sideshow.

You're nuts. Granted, "The Man Who Was Never Born" was an incredible piece of television with Landau's powerful performance and the proto-Terminator plotline, but Lomax's monologue at the end of "O.B.I.T." is one of the finest scenes in the whole series! Total Cold War scifi paranoia!

Great review, Dave. Each and every time you post one of these, I regret not getting into these toys when they came out (I was broke back then, and never bothered to correct that mistake later...).

Ironically, I usually enjoy a good courtroom drama, which OBIT basically was despite not taking place in a courtroom. But this one seemed to drag a little bit and the episode basically has a built in spoiler.. you KNOW Lomax is the monster from the get go, so his reveal and subsequent rant seemed rather anti-climactic to me.