I'm gonna be honest, I know near NOTHING about Nova. But he's one of those characters that I've always liked despite that. His ridiculous bucket head and cosmic powers have always resonated with me and have made Richard Rider a favorite character of mine despite barely knowing anything about him fiction wise.

Plus he's kind of a punk kid in Ultimate Spiderman, and that's kind of cool.

With the release of Guardian of the Galaxy this Summer, it gives Hasbro a chance to touch into some of the comic characters in the Marvel Legends line, so when they announced a brand new Nova figure, I was pretty excited. Especially since the original one isn't exactly the best looking guy out there. 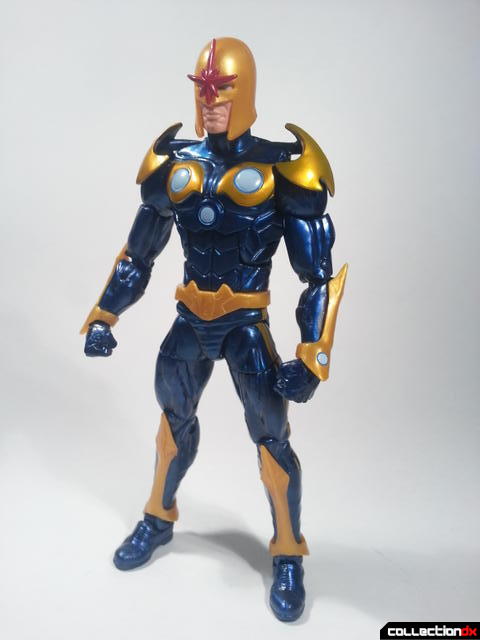 Nova is sculpted on a brand new body and man do I dig the way it looks. He's armored, but very lean despite that. There's loads of lines and techy bits that cover his body so that he doesn't look like every other figure out there; a problem that I actually did have with the Marvel Universe version of this guy which I never picked up. 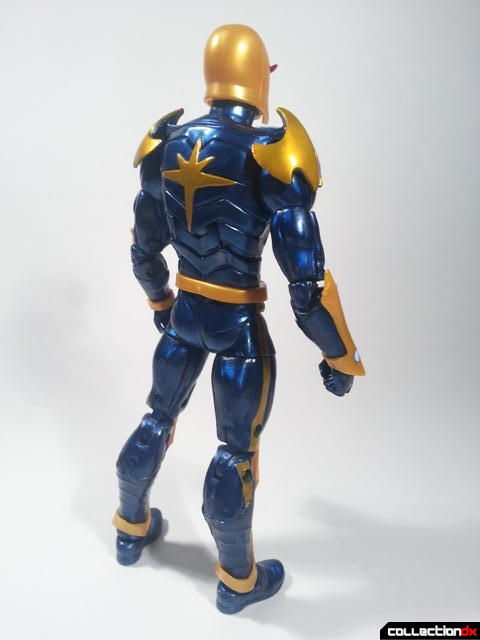 Even though you can only see his lower face, I think this guy has a pretty strong head sculpt. It's a very powerful looking chin and the skin tone on the plastic is just right. 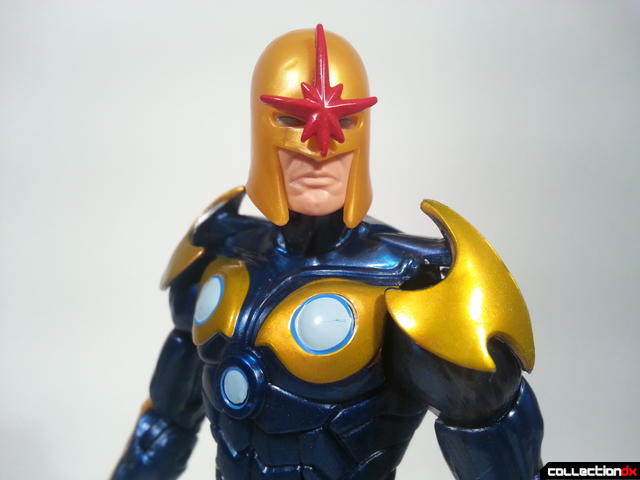 The articulation on Nova is pretty great, but it is worth noting that it's a little different than previous Marvel Legends. Not because of changes to the joints, but because of the materials used. The joints are made of a much more rubbery plastic than previous Legends figures, so getting some of the clicks and "ratchets" in the elbow and knee joints takes a little bit more work. His hips are also a bit looser as well, but that seems pretty easy to fix with the help of a little bit of floor polish or super glue. 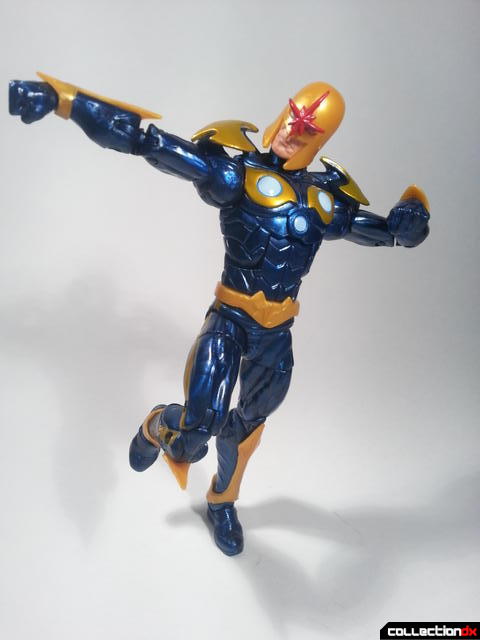 I think one of the most interesting points of articulation on this guy are his shoulder pads. Instead of being pinned on like a lot of the Iron Man shoulders pads, these are actually on hinges that are built into the torso. It reminds me a lot of how the original SH Figuarts shoulders often worked, and seems like a neat innovation to try something new. 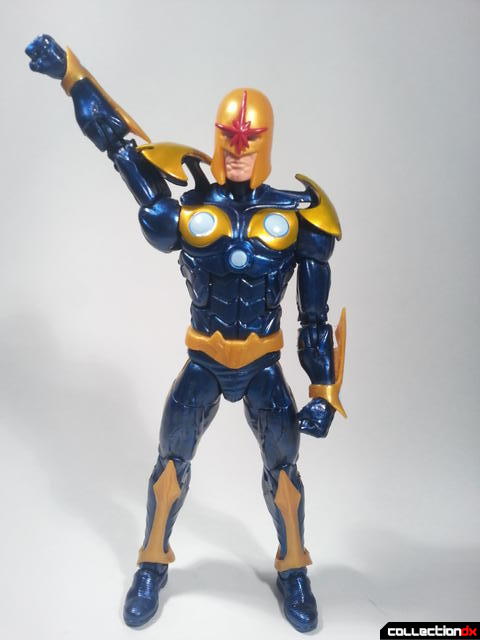 Of course Nova also features the beloved ankle rockers that allow him to get some more dynamic poses. There's just enough forward tilt to get more expressive poses as well. 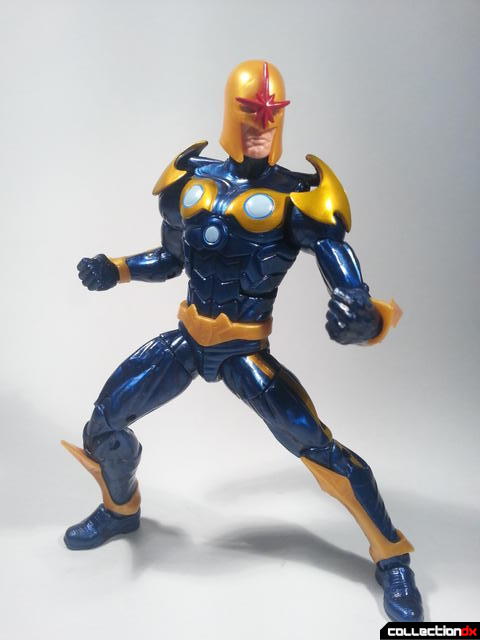 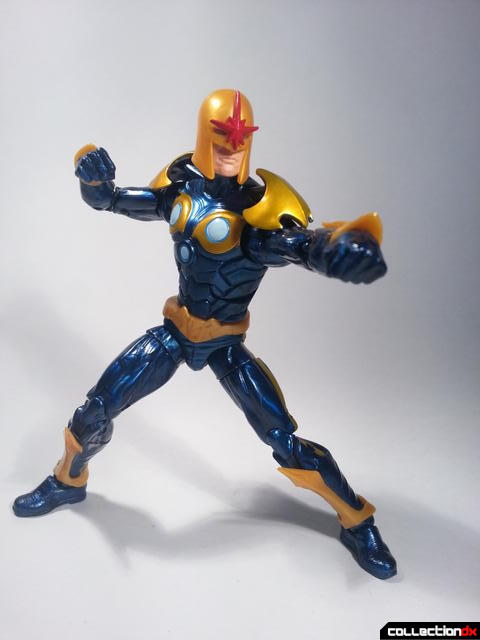 This guy does a pretty mean Iron Man 2 pose as well. At least, way better than any Iron Man toy I own. 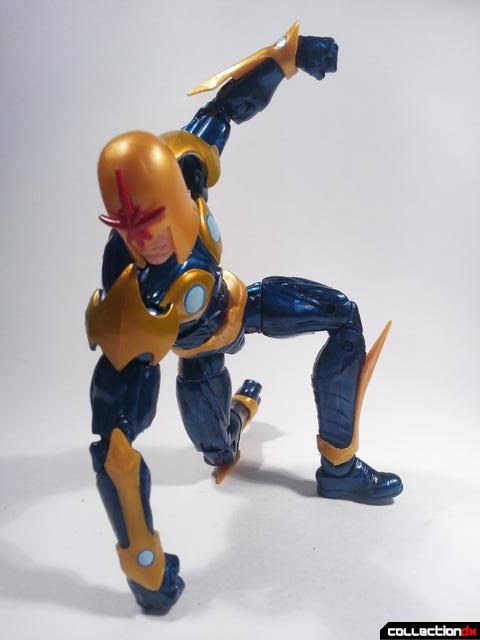 With the help of a stand, this guy can get into some pretty nice flight poses as well. 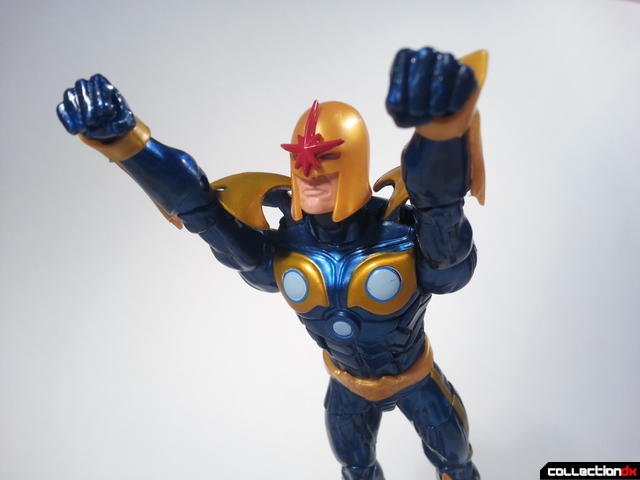 Over all, I'm very happy with this figure. It looks good, it poses good, and in its simplicity, it's an incredibly fun figure (It also comes with a Build a Figure part, but I'll cover that further down the road). If you like Marvel Legends, this guy is a definite pick up, and even if you just like good toys, I would recommend at least getting Nova from this wave. He may be the star of the series so far. Although I haven't gotten Christ Pratt yet, so that may change. We'll just have to wait and see. 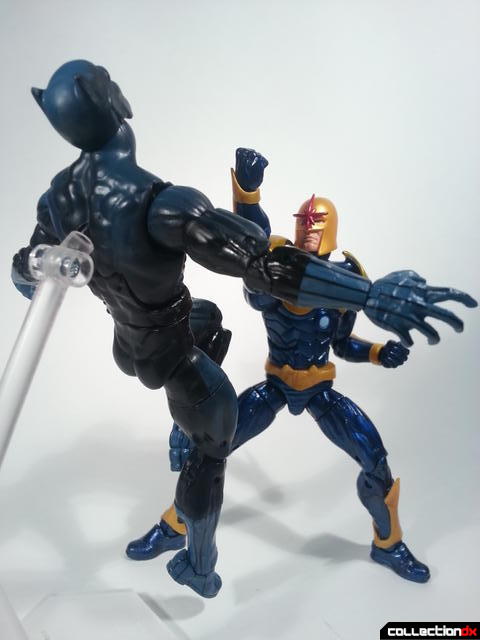 Also if you're wondering why Nova is fighting against Black Panther, I have no idea. Marvel comics are crazy. 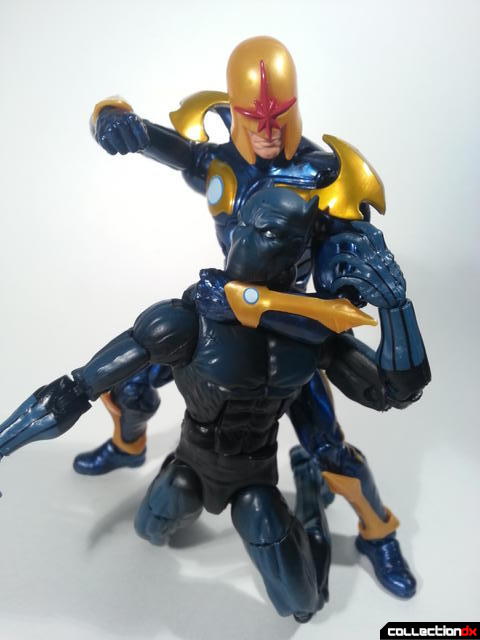 That's what the head sculpt makes me think. I see some serious Dredd customs coming from this guy!

Oh man, you're totally right. He's got that powerful confident chin for sure.

Once seen it cannot be unseen!

Nova on Ultimate Spider-Man is the new Nova Sam Alexander.

Yes you are absolutely right.

He's still a jerk, though!

Despite this Nova not being Alexander but Richard Ryder, the original ad more experimented Nova, good review. Mine came bend on the package... I have to boild the left arm to reacomodate it. The joints are all soft and loose. The sculpt is what I have been expecting from a Nova figure since Holocaust wave. I would recommend you read Annihilation when Nova became one of the more bad asses Marvel Heroes.