Tavish DeGroot is a mysterious and deadly one-eyed black Scotsman with an equal affinity towards explosives and strong liquor. Hired by Redmond Mann, he is RED team’s Demoman and excels in all forms of explosives (and swords, too, but that’s dumb).

With this, NECA gives us the RED Demoman from Valve’s first person shooter Team Fortress 2. NECA has been pretty shaky with quality figures in the past, and this item is no different, sporting an amazing sculpt but horrendous paint and severely hindered articulation.

Packaging:
The Demoman comes in a simple clamshell package. Knives are useful here to extricate Tavish from his plastic prison. Artwork from the game is present.

Aesthetics:
As per NECA, this figure looks really great; it looks like it just jumped right out of the game and landed of your shelf. Everything about this figure is perfectly represented, right down to his severe lack of booty. 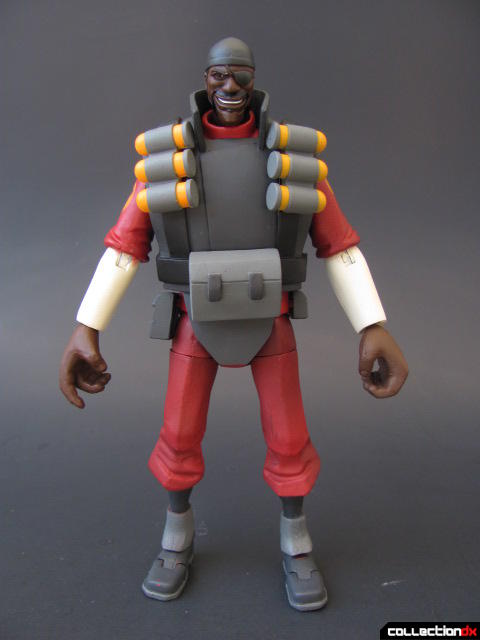 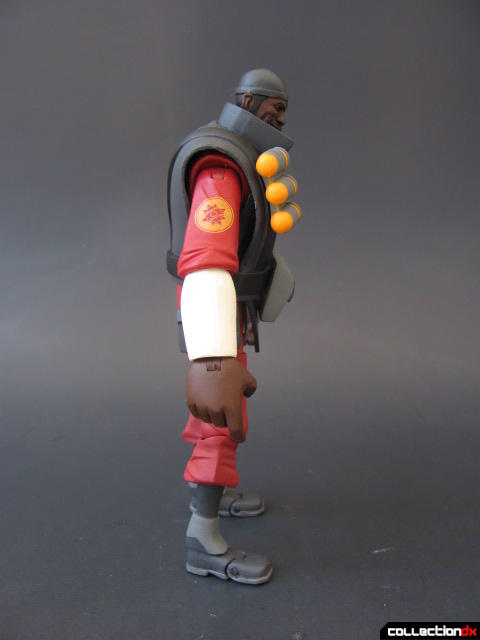 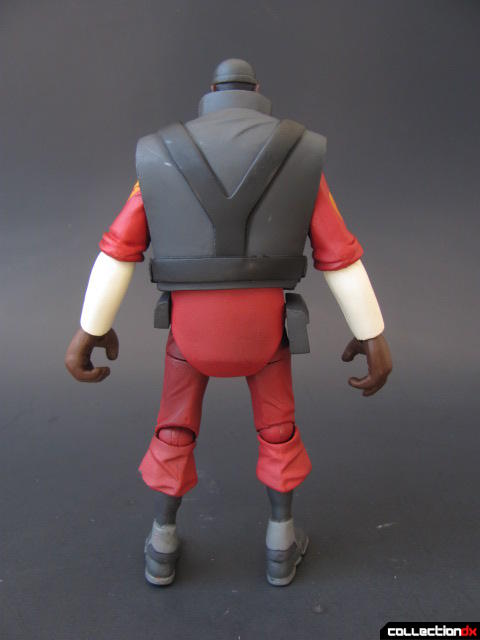 The proportions are spot on and the figure holds onto the styling of the game, that glorious Valve/Source soft and almost un-humanlike style. All his little doodads and details are present, too: grenades, straps, satchels, and spats. The coolest addition to the figure is the smiley face underneath his crotch guard (which is made of a soft rubber). Game accuracy FTW! 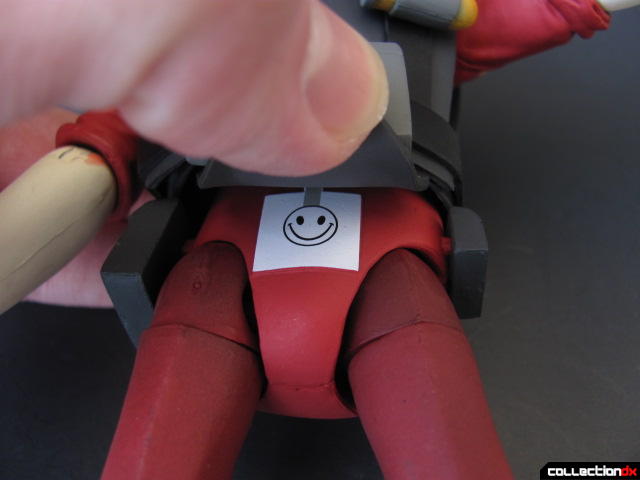 The face sculpt is good but looks decisively different enough to make it noticeable. Truly, it could be the fact that I never get to see the Demoman smile… or his face in general (it is an FPS). 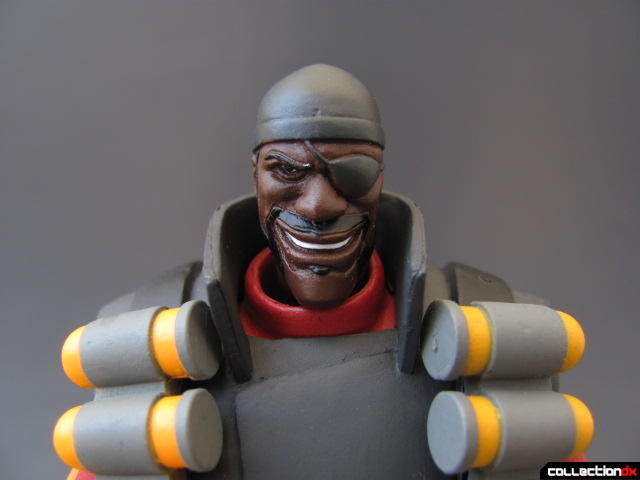 The colors are spot on, an off-white and dull red covering the whole figure. This is, however, where my first and HUGE point of contention lies: this figure is terribly painted. It’s not sealed; the paint comes off IN YOUR HANDS. It sheds, it’s splattered, it bleeds over. 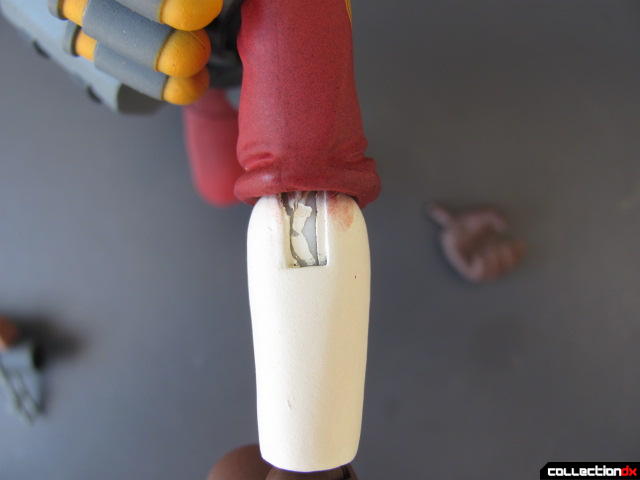 This is unbelievable. I don’t think I’ve ever had a toy that would have paint fall off just by playing with it that wasn’t a bootleg. I seriously had little brown chips all over my hands just from switching out his hands and accessories. 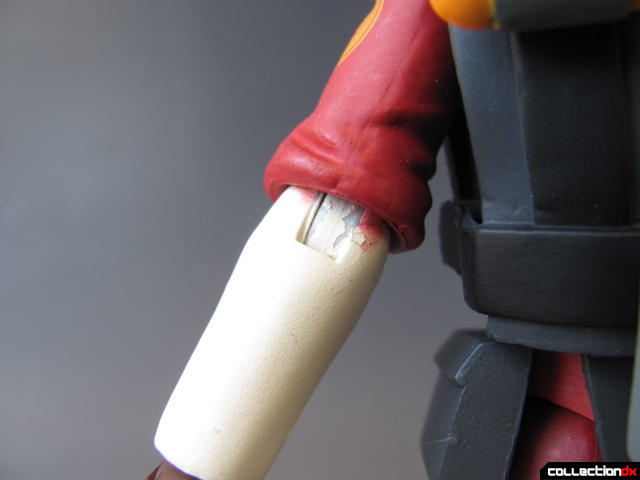 Paint isn’t symmetrical nor does it match everywhere that it needs to, like in proximity. My two sets of grenades, left and right, are different colors. I mean, C’MON!

On the bright side, the tampos are great. 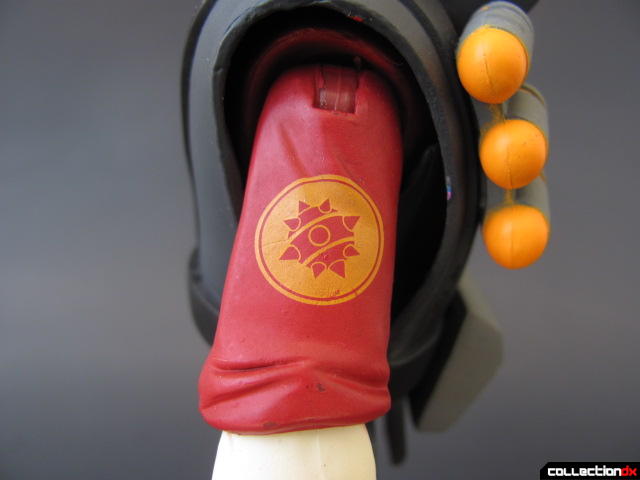 Articulation:
The articulation is almost non-existent. His legs move well enough with a single universal joint in his knees and a ball joint in his hips (also a thigh swivel), and his feet sport a (useless) toe hinge and ankle swivel. 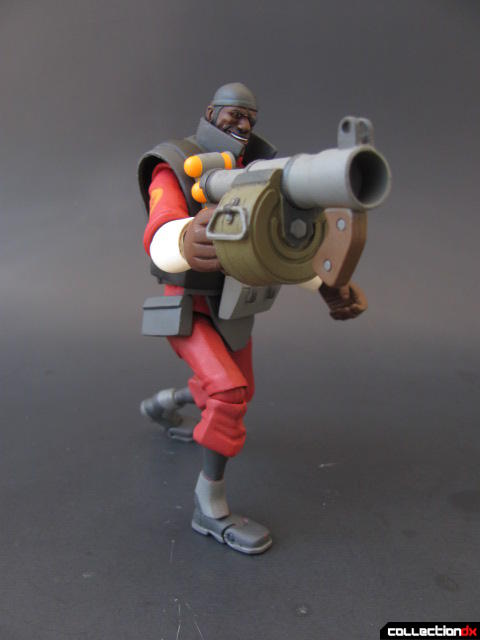 His arms are where we start to get cloistered. They sport all the needed joints, but they are encumbered by the sculpt itself. His elbows bend to about 35 degrees, so no reaching across his chest to, I dunno, hold his freakin’ weapons. 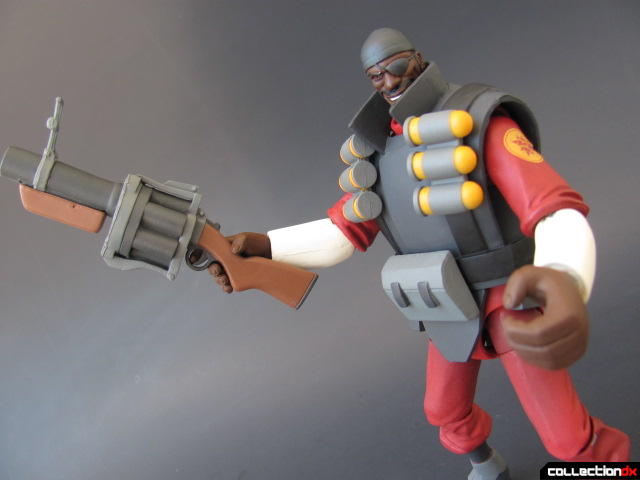 Wrists are useless, too, but his shoulders do allow a good bit of range. His vest is all made from a soft rubber and it helps in restricting his waist and posable ab-crunch. 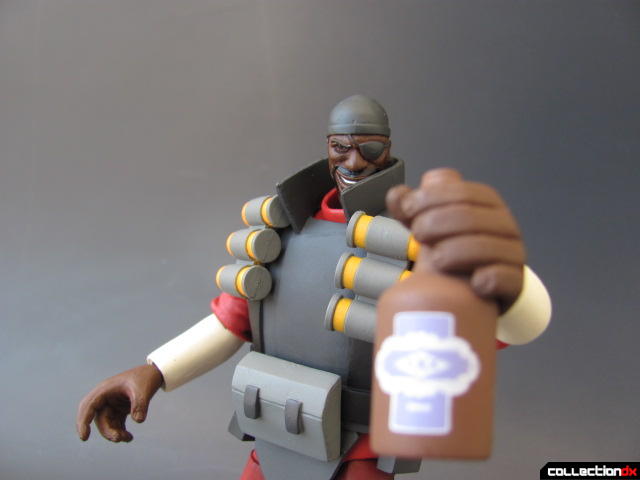 Getting the Demoman to balance is nigh impossible, as he loves to fall over. He shelf dove a couple of times for me. He is a sturdy one, though. 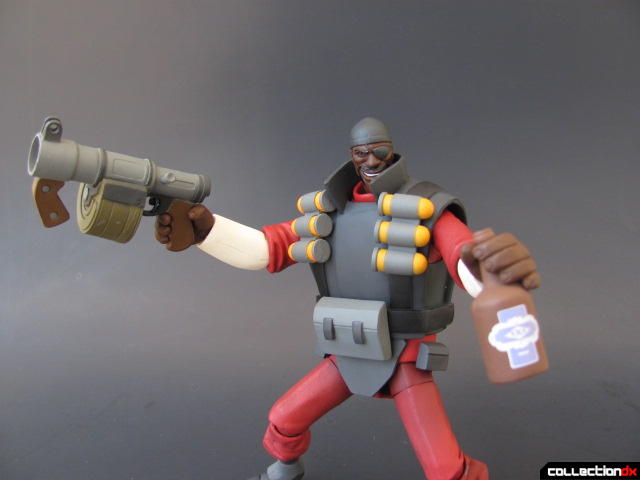 Tavish DeGroot stands at about six and a half inches tall. 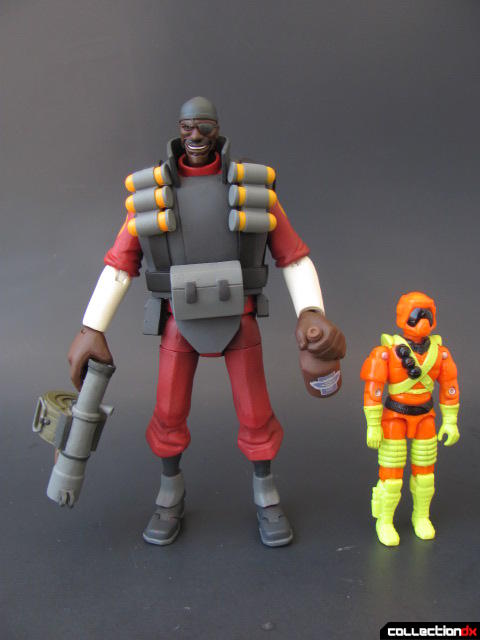 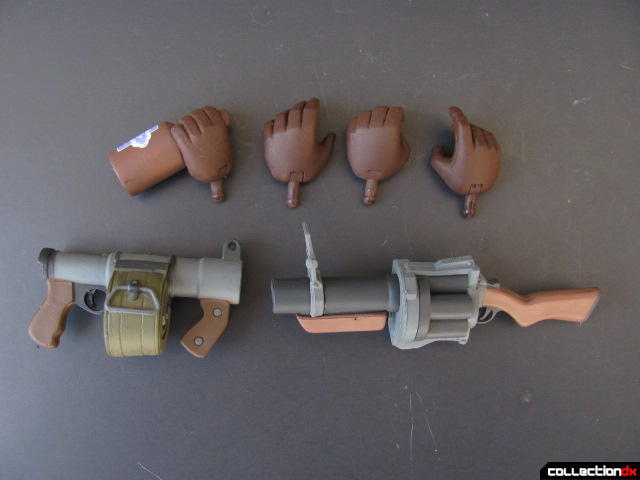 These look fantastic and, just like the Demoman, look like they popped right out of the game. The color and sculpt are spot on. 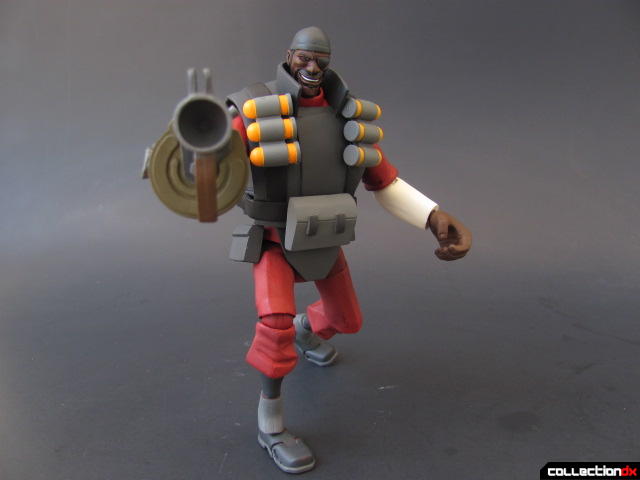 I somewhat wish that the bottle was removable and not permanently fixed to the fourth hand so that it could be used as his melee weapon, but alas. 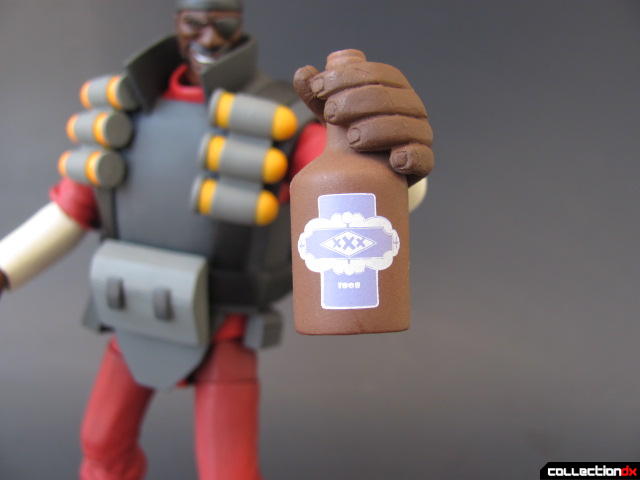 Gimmicks:
As everyone knows, you play Team Fortress 2 for the hats. Valve knows this, so included with every Demoman is a collectable card that has a secret code on it. 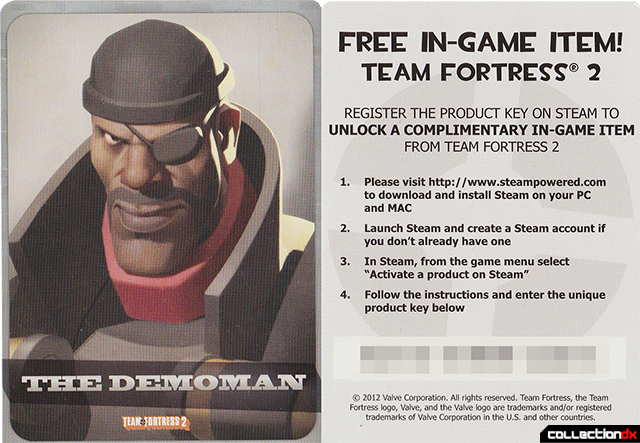 Simply enter that code and you will receive a free Genuine Glengarry Bonnet, an $8.99 value or 30 refined metal equivalent (almost makes up for the toy costing $22.99)! 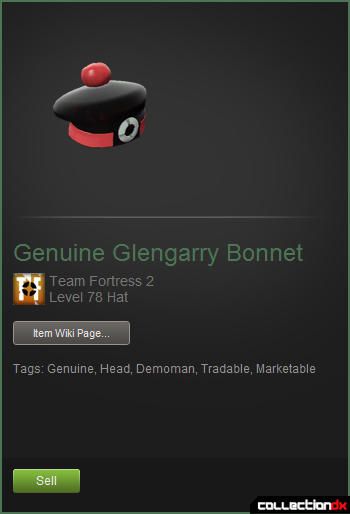 Unless you just adore the Demoman or want that hat, this toy will make you cry; it’s positively a train-wreck. Though the sculpt is truly outstanding, the paint, balance, and articulation are horrendous. It feels like this toy is breaking in my hands when I move it (the shedding paint solidifies this idea). If you do get this toy, pose it once and leave it; it would have made a better statue anyway…

Yikes, that doesn't look good. I could forgive the bad articulation to make up for the accurate sculpt, but I can't forgive it for having paint chip almost immediately. If they could get quality control down, this wouldn't be that bad a figure.

Huh....I thought all things Valve related would be near perfect in quality, but take EONS to release...

Shame this figure fails in almost every respect...just looking at the pictures makes me think that this figure is probably made of that cheap, textured, rubbery plastic that's used on Matelle's Megaman EXE toys...and I mean that in a bad way. I never liked those toys. they barely posed, their paint looked cheap, and they....they didn't look very good...

Valve usually does have a track record for that, eh?
And the figure feels fine: it's solid, got some good heft to it, smooth as anything. The thing is, however, is that it feels like clay or really hard vinyl (if that's what you are referring to by "cheap, textured, rubbery plastic"). And I think that Demoman looks great, but that does not fix the fact that he's, well... not very good.