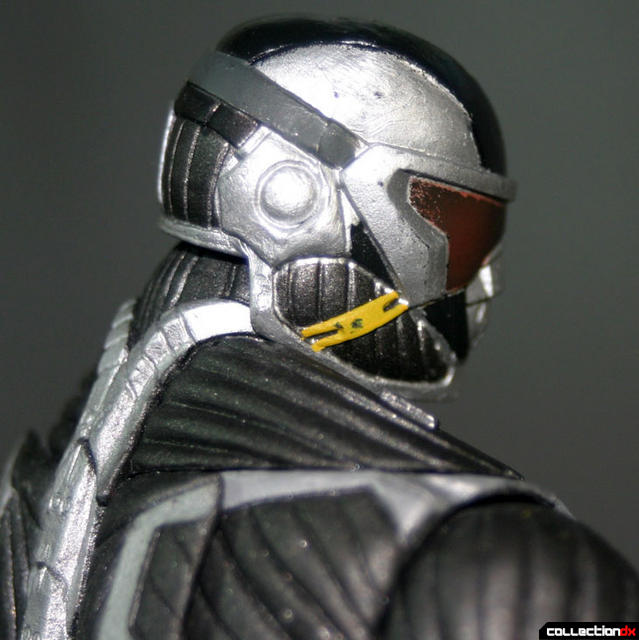 Maximum Game!
Released by Electronic Arts, Crysis was a test-bed launch title for German developer Crytek for their next generation gaming software dubbed “CryEngine 2,” the follow-up to their earlier platform used in the development of games such as Far Cry (and later versions ‘Far Cry Instincts’ produced by Ubisoft). The focus for the CryEngine software was for developing games using real-time render quality capable of creating a photorealistic interactive world on par with the pre-rendered graphics seen in movies. Despite not being produced for the major video game consoles until recently, Crysis was an exclusively PC smashing hit due to the engine’s demands for computer processing power to load it, let alone strong enough to run it.

From personal experience having built such a platform TWICE, the Crysis experience was one that set a new standard in quality engineering and dynamic first person gameplay. While it was no fourth-wall bending affair like Bioshock, Crysis still holds a title for being one of the best looking games I have ever played.

The CryEngine 2 was the little engine that demanded too much, and Crytek took it back to the developing farm to improve it. After recoding it to something a little more lenient on non-WATSON/NASA grade level computers with the release of Crysis: Warhead (a standalone expansion/side-story to the original Crysis), Crytek began working on their next, next-generation software, the CryEngine 3. Improving on the quality of the CryEngine 2, the goal of the third CryEngine is focused towards running on not just PC but on the Microsoft X-Box 360 and the Sony Playstation 3 video game consoles as well. Much like its predecessor, the CryEngine 3 made its grand debut with the launch of Crytek’s home grown franchise in Crysis 2. 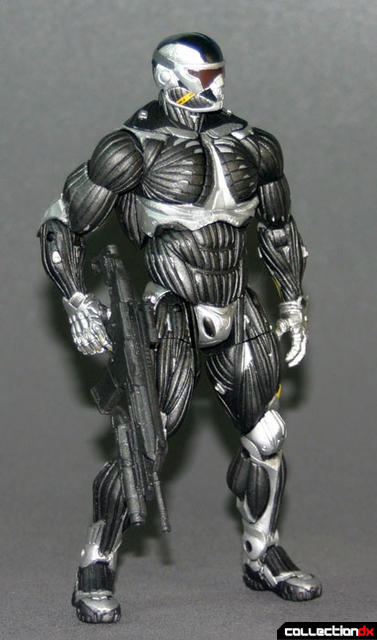 Set three years after the end of the first game, Crysis 2 picks up with a world slipping into chaos. A mysterious intensity of natural disasters and an unknown viral outbreak in the heart of New York caused by the Ceph, a race of squid-like aliens that have been dormant on Earth for centuries that were inadvertently unleashed during the occupation of the Lingshan Islands, the fictitious location from the first Crysis. Trading palm trees for asphalt, Crysis 2 takes players to the concrete jungle of New York City, the city under siege that never sleeps. Players are set in the boots of “Alcatraz,” a US Special Forces member wearing the greatest weapon humanity has to fight against the alien threat, the Nanosuit 2. However powerful the suit is, it is a mystery of its own and a danger to both human and alien alike. Alcatraz must not only fight for the survival against the Ceph, but against CELL, the private armed group of the Cry-Net Security Systems organization that produced the Nanosuit, who have orders to take it back with lethal force.

The motto for Crysis was “Adapt, Engage, and Survive.” Crysis 2 wants you to “Be Strong, Be Fast, Be Invisible. Be the Weapon.”

These words are given form thanks to the Nanosuit. 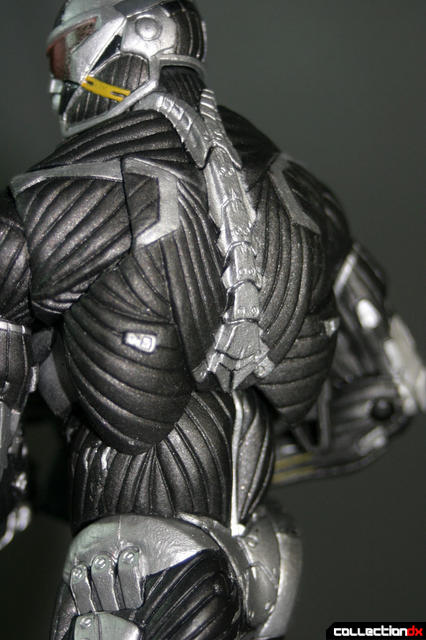 The Nanosuit is visually modeled in the shape of human muscle tissue with metal ribbing that lined the body’s sensitive areas and points of articulation. The Suit was more than just a character’s appearance, but the core element of Crysis’ open world gameplay. In the first Crysis, the Suit had the ability to switch between functional modes: Strength, Speed, Cloak and Armor at the whim of the player. 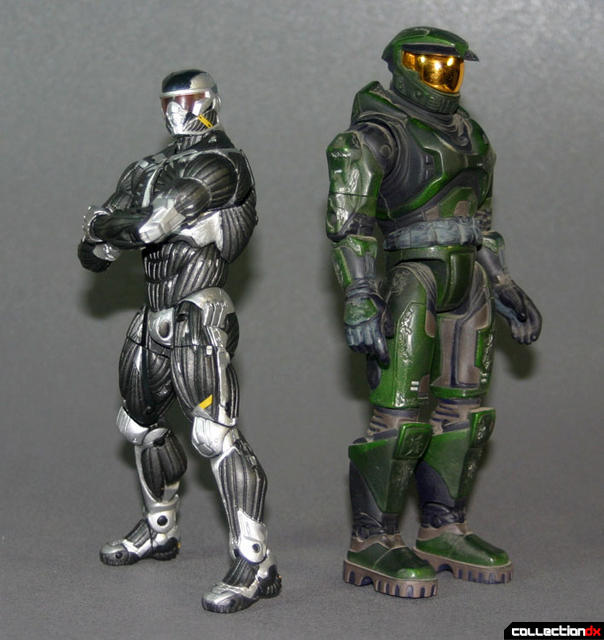 The Nanosuit’s level of versatility was what made Crysis more enjoyable than other first person shooter games such as Halo, due to the fact that the Nanosuit actually did something rather than just made the player look cool. Be it with a keyboard and mouse or a controller (like I did), navigating the Nanosuit’s radial control became second nature. Using all three functions at once was easy as running over a minefield at Maximum Speed and jumping over a barricade with Maximum Strength while ducking in Cloak mode were just a small part of what the Nanosuit could do. 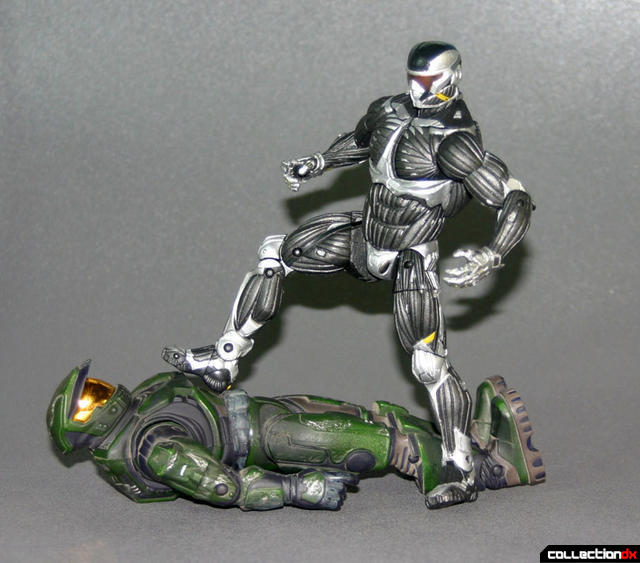 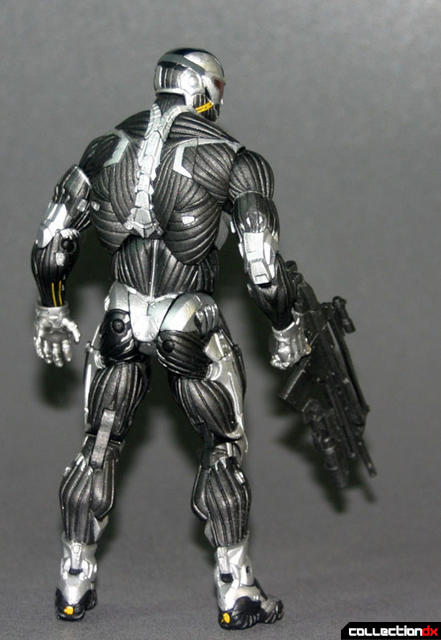 For Crysis 2, the Nanosuit has received a tremendous overhaul in both functionality and form. Visually, the Nanosuit has been sculpted into something more natural compared to its previous incarnation. The overall look of the Nanosuit 2 is purely Human, a symbolic gesture of its wearer’s identity as a species in the face of a hostile alien threat. Functionally, the suit’s abilities have been reworked to engage the different functions in real time rather than rely on a heads-up-display menu that allowed the player to select their ability of choice albeit simplified for the game’s multiple formats on controller based gaming consoles. Armor and Cloak are secondary abilities at the push of a button while Strength and Speed have been retooled into the basic controls for sprinting and kicking over cars. The drawback to the Nanosuit 2 comes from using multiple functions at once which can drain its power completely at the wrong time if one isn’t careful. Where the first Nanosuit was designed for however a player wanted, Nanosuit 2 is designed for using it how it is needed.
Players are not limited by the suit’s existing restraints. By collecting the spores from dead Ceph called “Nano-catalysts,” users can upgrade modules of the Nanosuit which can maximize each function’s potential. Despite that, the battery life still sucks.

Thanks to NECA, Crysis 2 can add “Be the Toy” to its slogan. 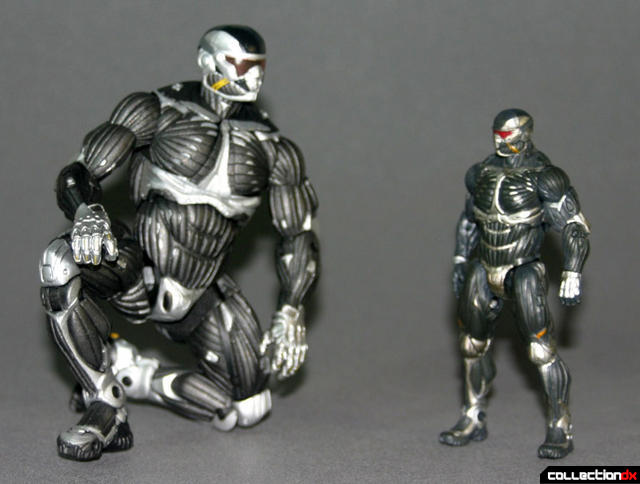 Handling the game’s debut in plastic are two companies with two separate methods creating two unique takes on the same form. The first is a lesser known newcomer called Unimax with their own brand of 4 inch tall video game figures from various series called “Game Stars” with six unique molds to Crysis. The other is by collectors’ figure modeling mega-company NECA with their much larger, “Player Select” series of 7 inch tall line action figures. While Unimax is gearing towards creating an assortment of figures relating to the game with three variations of the aliens and both versions of the Nanosuit, NECA is taking the more limited approach by focusing their attentions on single characters starting with the Nanosuit 2.

The Nanosuit 2 comes packaged in NECA’s standard square blister box with only the game’s title and character name labeled on the front. The insert art sheet shows the backdrop from the game’s box-art of Times Square in ruins while the card back explains the designer’s features for the figure as well as some technical information released by the Nanosuit’s developer Cry-Net Security Systems.

With no distractions on the box, the figure stands on its own as the centerpiece of its release. 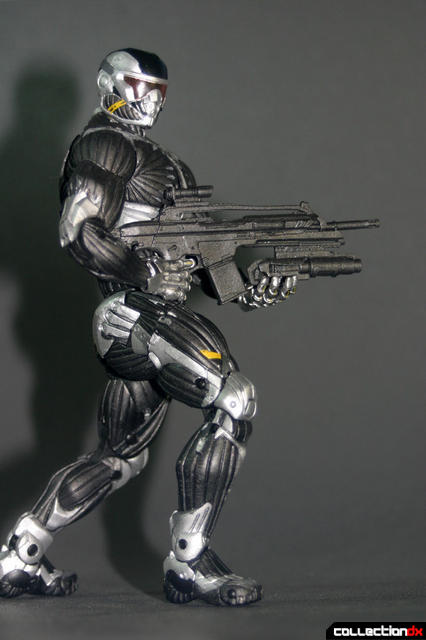 Simply put, this figure is awesome. Standing just about 7 inches tall, the figure is impressive in its design, weight, and articulation. By design, the Nanosuit 2 is a near perfect rendition of the digital form of the Nanosuit combined with NECA’s modeling experience. Compared to other figures produced by NECA, or any other action figures in recent memory, the Nanosuit is by far one of the most developed multi-jointed action figures I have ever seen. 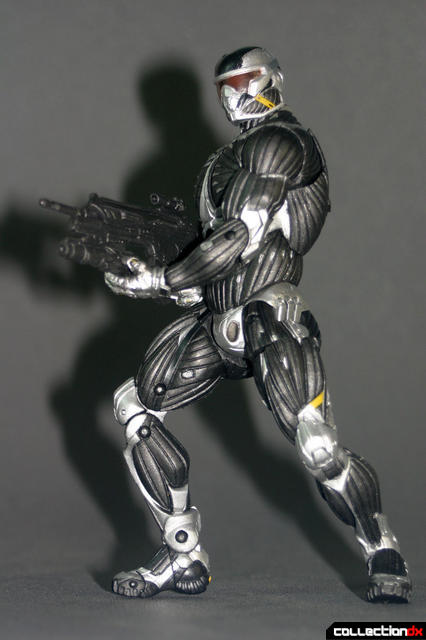 All of the suit’s details (with exception to its ultrafine detailing of honeycomb micro-fibers) have been reproduced to match perfectly against its source. The figure is molded in durable black material and is painted according to its original design.

NECA’s attention to detail continues to impress with the figure’s articulation. All of the figure’s main joints are hidden in its design. Sporting over 28 points of articulation broken down into every segment of the body, the Nanosuit is a true piece of art in action. 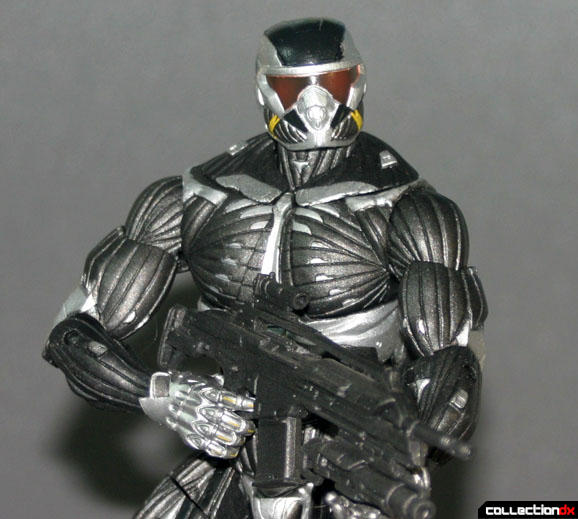 An unexpected revelation once out of the box was the Nanosuit’s articulated pectoral muscles, which give the arms an extended range of motion and allow the figure to take a more natural shooting stance while holding its single accessory, the SCAR (Special Combat Assault Rifle).

The Nanosuit’s minimalist appearance is complimented by only coming with the game’s signature weapon, the SCAR. This single weapon is an example of Crysis’ adaptive weapon settings where one gun can become many with the ability to not only adjust the rifle’s rate of fire, but improve its range (through attachable scopes) and versatility with modular weapon attachments such as the grenade launcher. 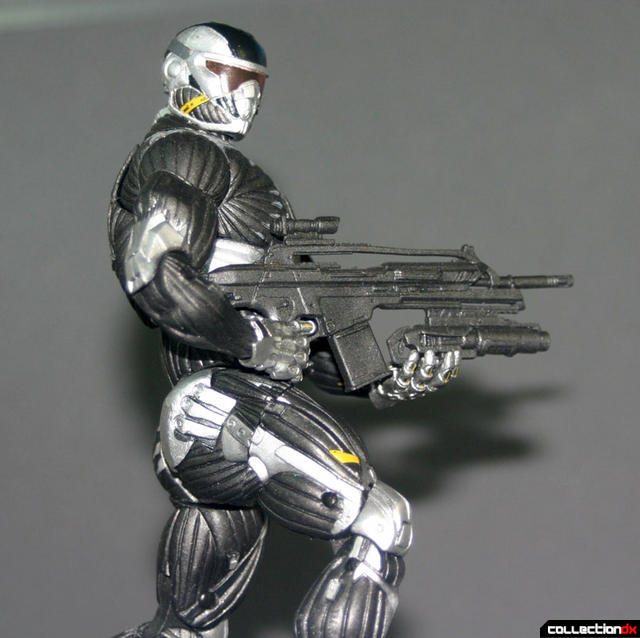 As the only accessory (or in my case the only gun I will ever need), the SCAR comes molded in a single piece with the Assault Scope and Grenade Launcher attachments, despite the game’s concept of being able to remove them. On the downside, the rifle is unpainted, which makes it look too much like a toy compared to the figure it comes with.

In short, this is one of the coolest figures I have ever seen and goes perfectly with one of the best game series I have ever played. If NECA has any plans to continue producing figures for Crysis, then I can only hope they will revisit the first Crysis and make a figure based on the Nanosuit from that game as well! Until then, the Nanosuit 2 is the best hope for humanity and in toy design! 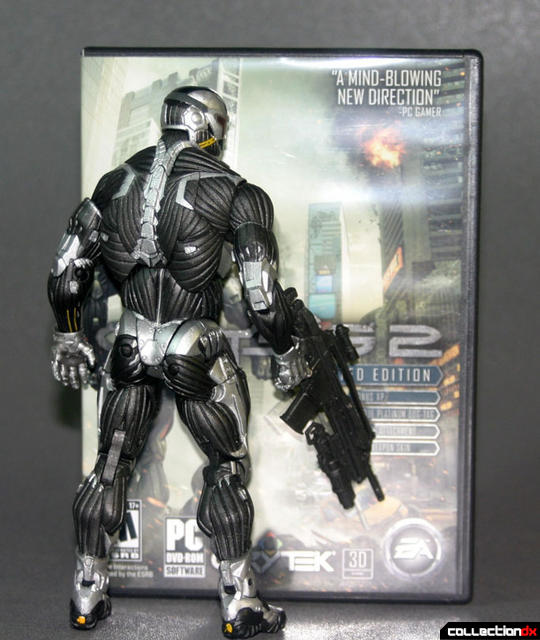