Any child walking around a pharmacy in the late 80's to early 90's most likely encountered the ubiquitous Moto Bots in some form or another. Maybe they came in a two-pack or maybe they sported day glow colors, but those sub-Gobots level machines could be admired for staying simple and playable when every other toy line was trying to reinvent itself with even gaudier shades of neon.

Both JoshB and myself have an odd fascination with off-brand robot toys. During one CollectionDX show he brought out a Moto Bot I had never seen before, which he would later pass on to me. I grew up with Moto Bots and still have a bunch from my childhood. 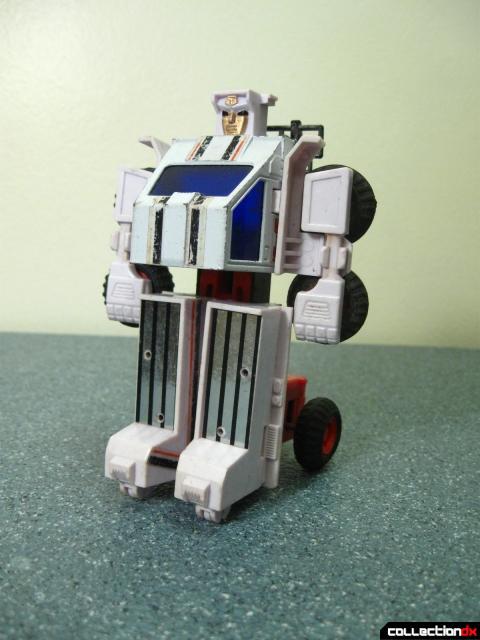 Since none of these guys have names per se, I am simply going to refer to him by what the stickers on his vehicle mode say: 6x6. This chunky guy is one of the burliest looking Moto Bots I have ever encountered. 6x6 has seen better days but is still in good working condition. Like most Moto Bots, his chest is made from diecast metal and even has transparent windows. The simple red and black stripes compliment his "IBM PC" gray colored body. 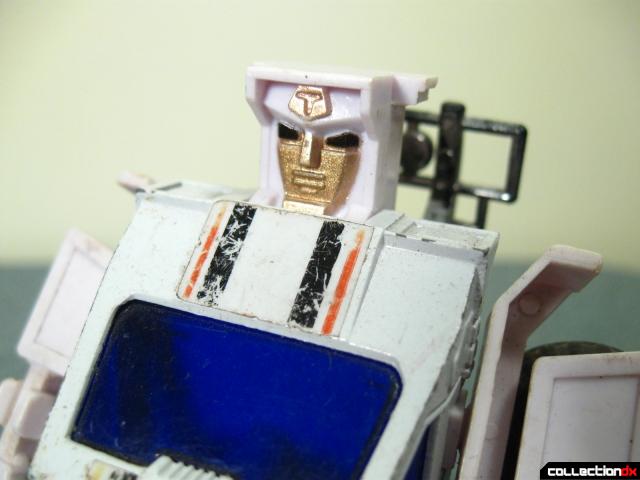 Even as a kid I couldn't help but see the connection between a Moto Bot's simple blocky face and the design of certain Gobots like Fly Trap and Geeper Creeper. Among his peers, 6x6 looks much more regal with a head crest that features a small embossed "T". 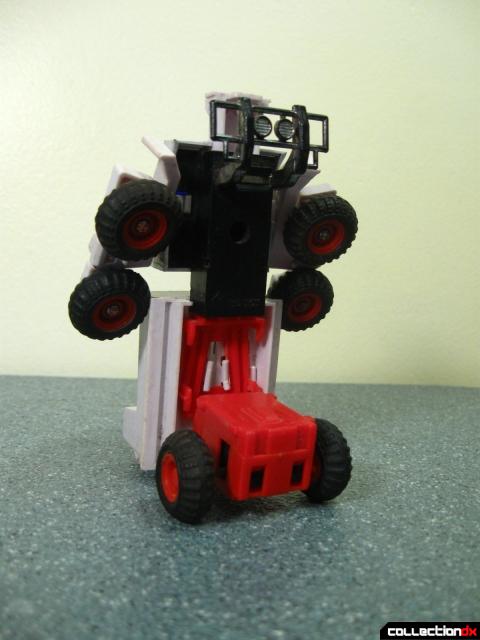 All Moto Bots possess the same pullback motor gimmick. While most of them use the same motor with vehicle appropriate tires, 6x6 has a beefier unit designed to go with his larger body. 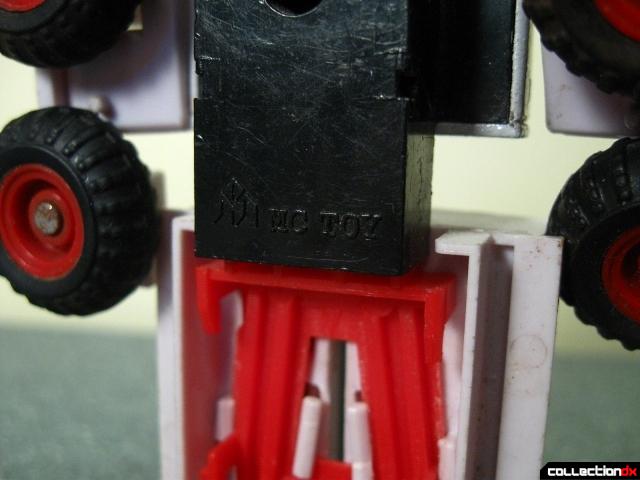 Moto Bots were manufactured by a company called MC Toys. Since most of these figures say "Made in Macau" I wonder if that's what the "MC" part refers to. 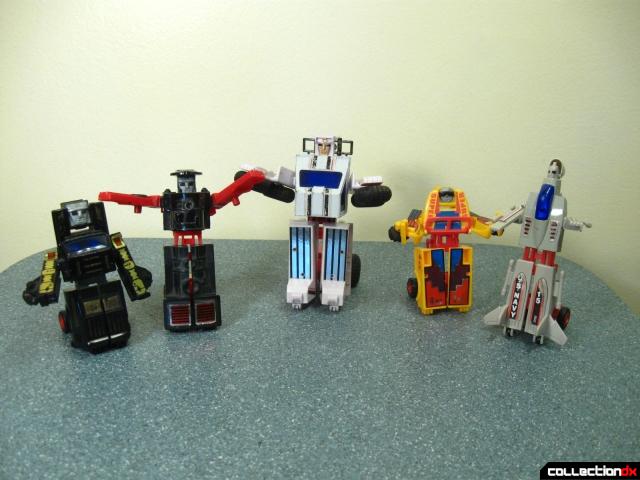 6x6 really stands out among my old Moto Bots. They all proudly display their minimal articulation that really emphasizes their simple mechanical nature. After all, a robot really only needs a pair of menacing outstretch arms to conquer the world. 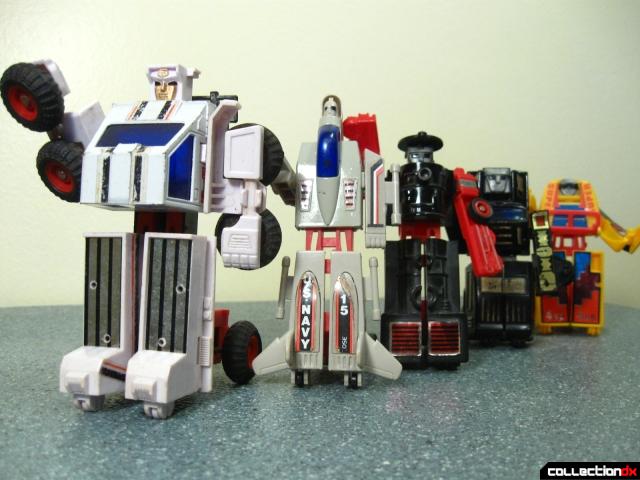 I like to think of 6x6 as the Moto Bot leader who commands his troops to roll in battle against the higher priced forces of evil. 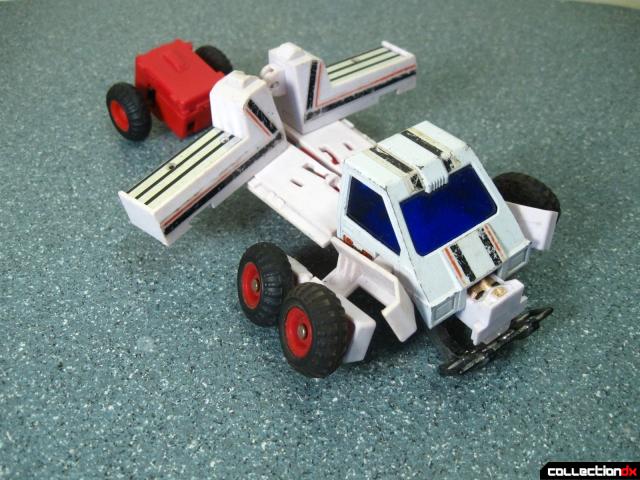 6x6's transformation is a little bit more involved than the usual Moto Bot fare. Parts of his legs actually slide out and then pivot 180 degrees to form the truck bed of his vehicle mode. The wheels on his arms flip around to the right orientation while his head retracts and is covered up by a hefty off roading bumper. 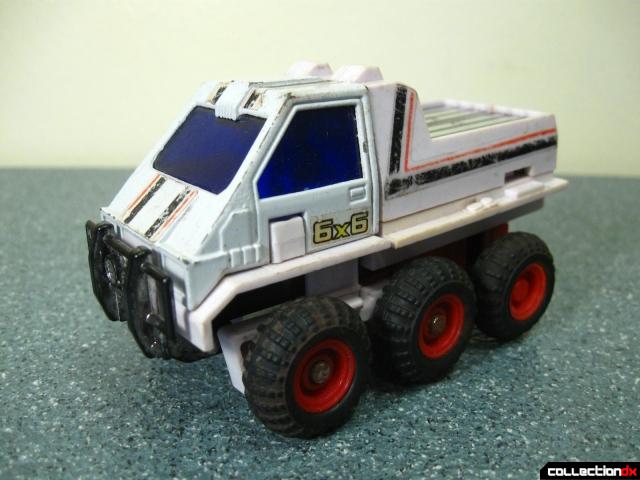 The resulting 6x6 vehicle is very compact yet still pretty imposing. The extra stripe detailing in the rear is now visible and looks appropriately 80's. 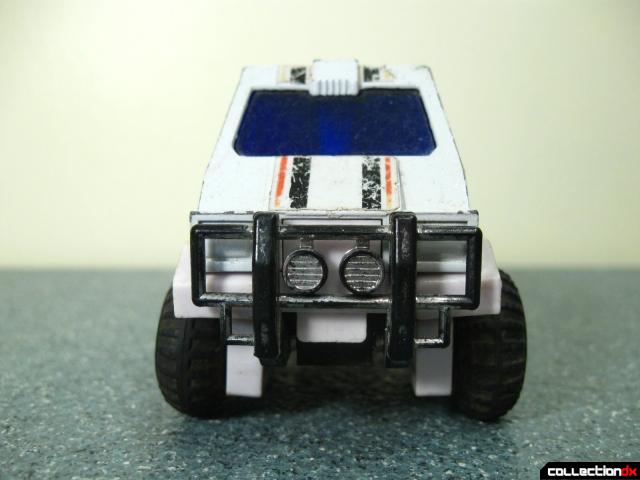 You don't wanna mess with this guy once he's been pull backed. 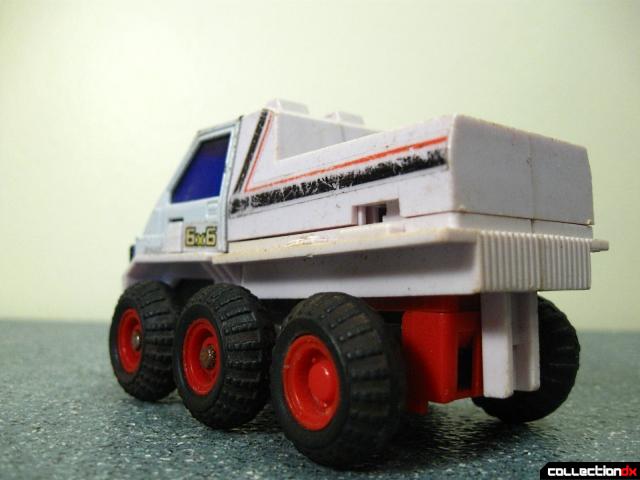 Any vehicle with more than four wheels always seemed really fascinating to kids. It's just strange and unusual enough without being wholly unrealistic. 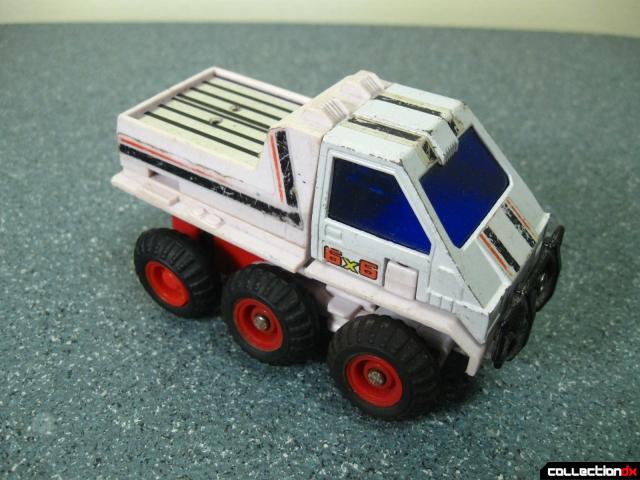 The only thing my 6x6 is missing is the plug in roll bar that fit into the holes in the truck bed. A lot of Moto Bots had parts that had to be removed for robot mode and would usually get misplayed or broken. 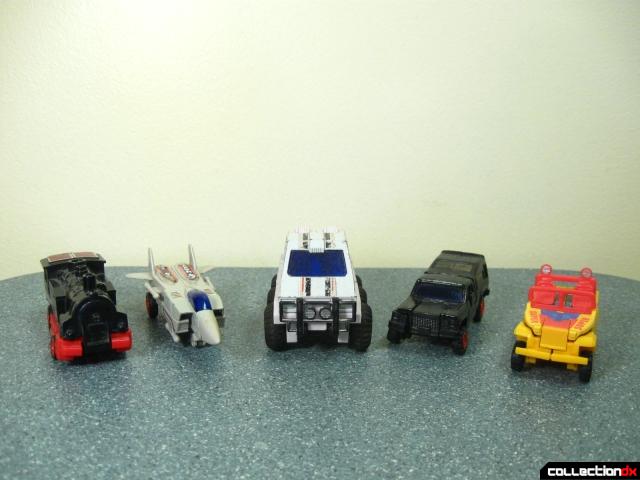 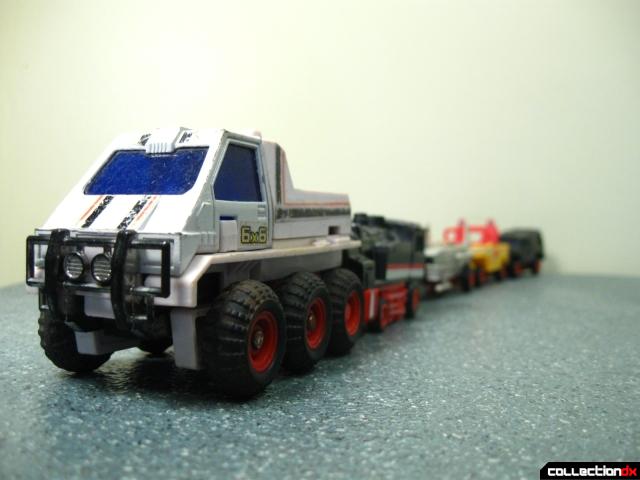 Moto Bots represent one of the least glamorous parts of robot toy heritage, but still proudly rolled on as a notable entry in their history. Nowadays their role as cheap, affordable transforming robots has been supplanted by the bigger lines. Maybe someday I'll get back into collecting these guys as they're still kicking around the second hand market for reasonable prices.

3 comments posted
Another one!

Thanks for another "I had that!" moment. Even as a kid I thought this guy was pretty lame, but it gives me a warm feeling to see him again.

I have two of these in my closet right now! They are the train and the jet. Now I know what series these little bots came from.

I have a red tractor trailer robot that I got sometime back in the 90's. I always thought he was a Gobot knock off, but recently I found out he was apart of this line. He's in perfect shape but unfortunately he's missing the top half of his trailer, the pull back motor, and his exhaust pipes which were molded together as one piece and are supposed to be placed behind his head in robot mode.