Misaka Mikoto is a girl with a lot of power. Often called "The Railgun" and "Biri Biri," Misaka is an electromaster who can shoot metal objects at high speeds. At a young age, the government took her DNA for research; what they made was a small army of Biri Biri clones.

Kotobukiya's mini figures play with the clone army and Biri Biri to make a little something silly and fun in the form of mini-figures. They come in a box that contains 12 smaller boxes, each figure carefully wrapped inside. 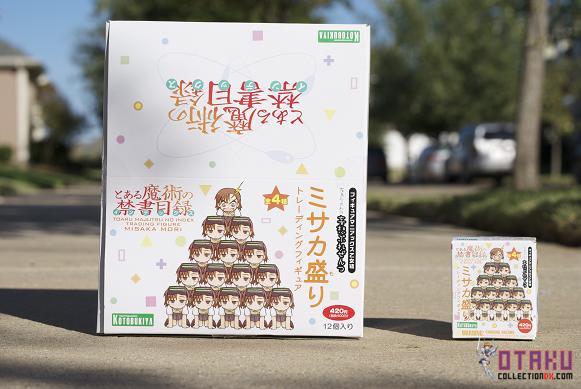 The little boxes are damn near impossible to get open without shredding the tops. They have the most useless perforated tear lines ever. 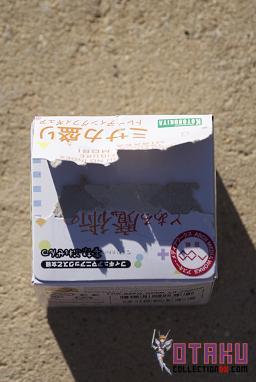 Inside is one Accelerator figure, one Biri Biri in a blue dress, one Biri Biri in her school uniform with a lightning bolt on her forehead and nine clones. The figures are all pretty small, as you can see. They're designed to be stacked on top of each other, like a pyramid. 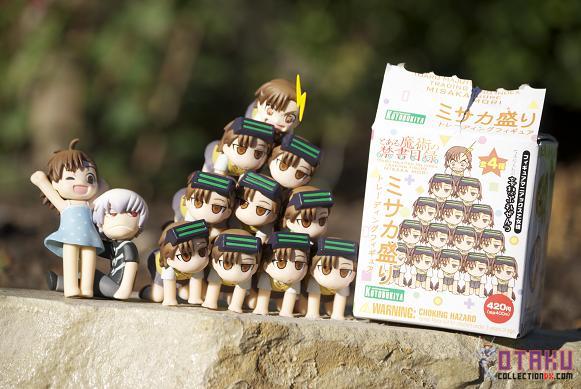 The mechanism for holding the figures together are little clear cuffs that attatch to the clone ankles, making a kind of chain gang. 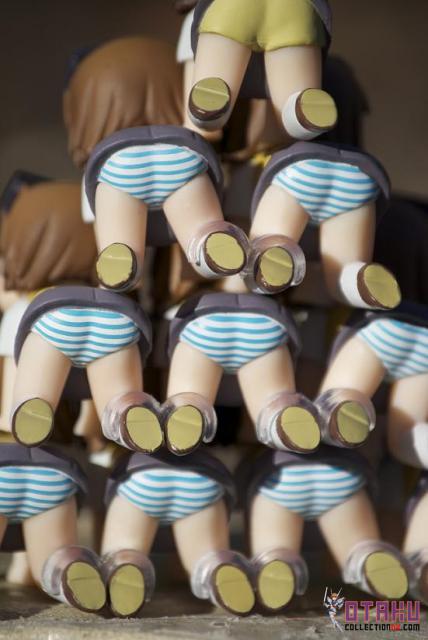 And as you can see from the upskirt here, the clones all have traditional anime blue and white striped panties while the real deal has mustard-colored panties that match her uniform. It takes a lot of time and patience to latch them together, and even then the clone heads, which feature little goggles, are kind of big and get in the way of lining them up evenly. Even with a steady hand and a little bit of time, it's still nearly impossible to get straight lines out of them. You also have to stack them so that the weight of the figures rests on the heads instead of the backs.  The feet will hang off the back of the pyramids a little bit precariously, so one bump will bring the whole shebang down. 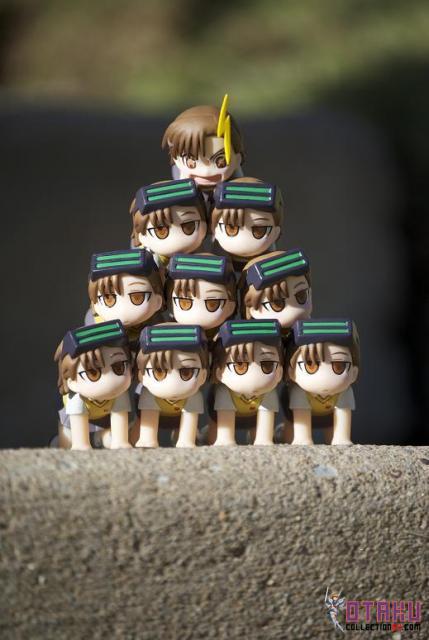 They're fun to play with and try to set straight in line, but after a little while it just gets frustrating. The plastic cuffs pop off pretty easily, too, so one I got the heads stacked on each other I just gave up and played around a little. Since I like Accelerator, I stuck him on top of the pyramid. 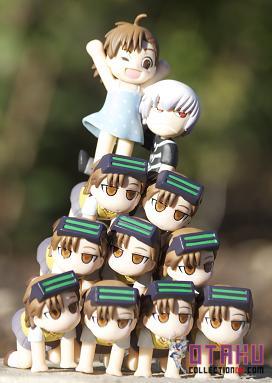 He doesn't look to pleased to be there, though. Here's a better shot of him: 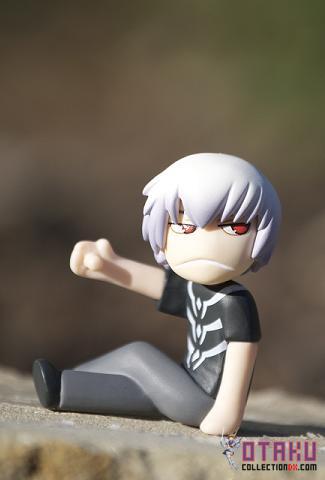 He and the blue dress figure attatch through the little nob on his hand. She has a corresponding hole in her back. While Accelerator sits up just fine, she needs him to stand up. 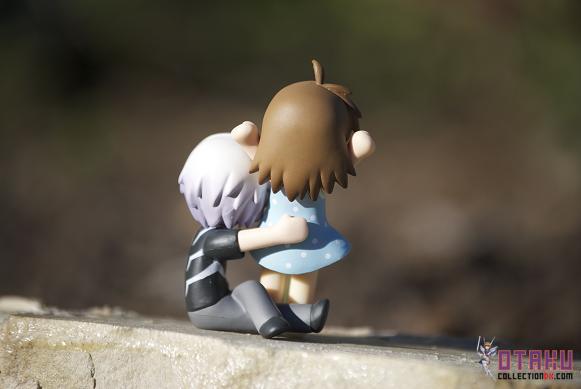 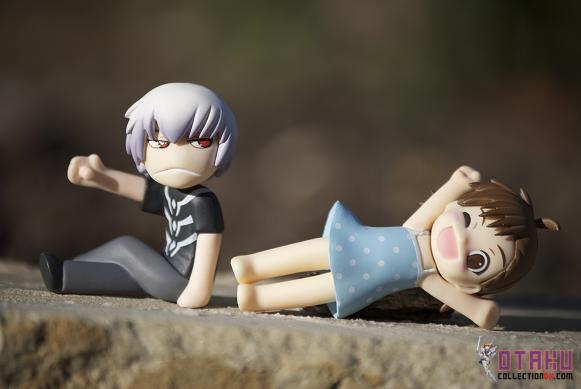 While the figures tend to wobble, for the most part they're well-made. The paint job on them is great; the only real bad spots I found were on the bottom of feet or other hidden spots. The only real flaw was in Biri Biri's lightning bolt. 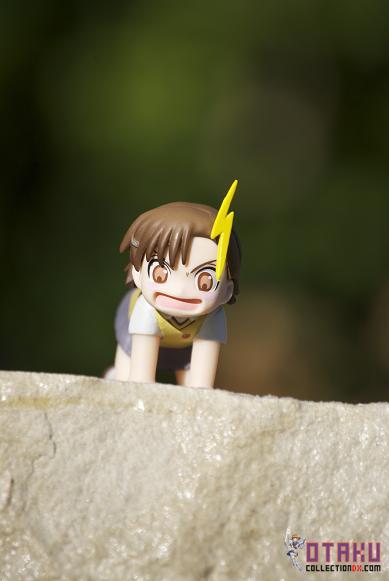 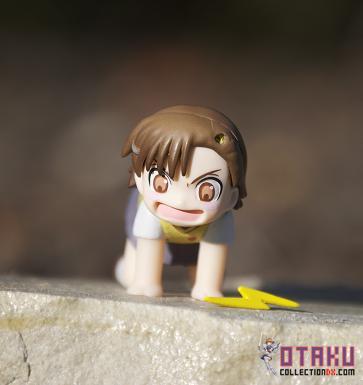 It's not supposed to. Mine broke off the first time she tumbled off the pyramid (and again, because it is unsteady this happens a lot). While there was enough tab on the back of the bolt to put it back into place, the break rendered the bolt highly fragile. A strong breeze would cause it to fall off. And since I took these shots outside, let me assure you that wasn't a metaphor.

That said, the set is fun to play with, and if you can set it up out of the way of pets or children or anything that could really jostle it, the figures should be fine. If you're impatient and don't like tending to the details aand angles of setting figures up, maybe this one isn't for you. That said, it's probably okay for most fans of "A Certain Magical Index." 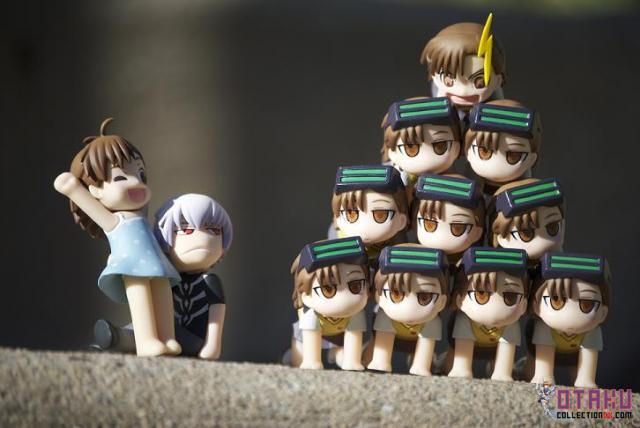