For some strange reason Matchbox had a love affair with the character Miriya from the Macross Saga portion of Robotech when they produced their Robotech Defense Force line of 3 ¾ action figures. In total they produced four different versions of Miriya: Miriya Black Flight Suit, Miriya Red Flight Suit, 6inch Zentradi sized figure and a prototype figure of Miriya in her Queadlruun-Rau flight suit that eventually saw the light of day as a Harmony Gold reissue in the 1990s. 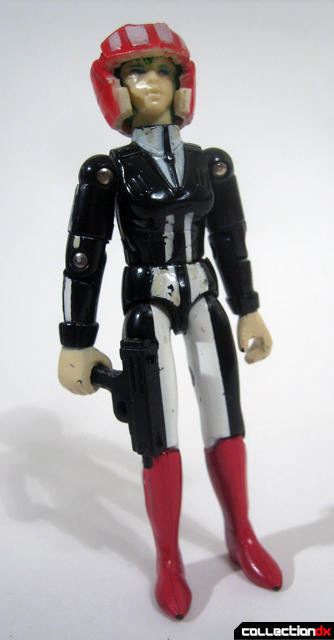 With a line of action figures that had so many missed opportunities of unreleased and unproduced figures I question why there would be so many versions of one character released? But this is 1980’s Matchbox we are talking about here and nothing really made much sense with certain aspects of the line. 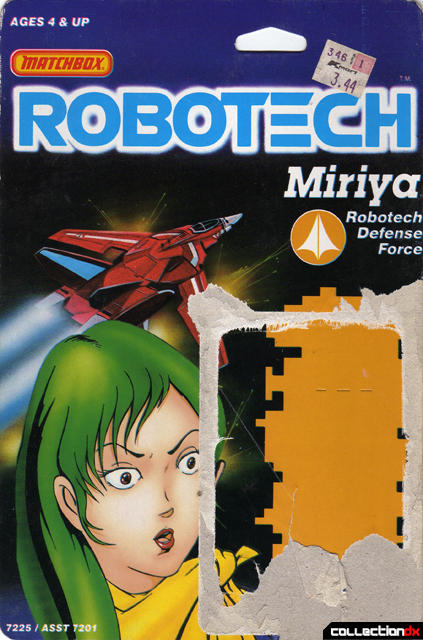 Miriya comes carded: 1x Miriya, 1x red helmet, 1x gun. This was my original figured I owned and played with back in the 1980s and it worn accordingly. The Matchbox Robotech Defense Force figures were known for flaking paint which this figure displays, and the paint was retouched back in the 1980s. I do love the choice of using an inspiring picture of Miriya's Red VF-1J as the backdrop on the figures backing card. 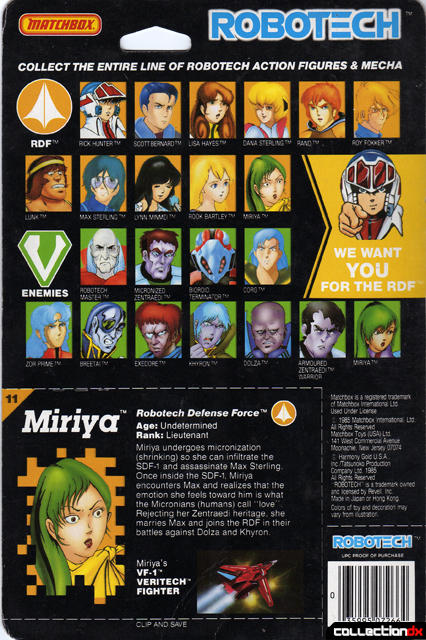 As I stated before in previous RDF figure reviews, I must of walked in at K-Mart as soon as they hit the pegs, as there was a huge crowd of kids checking out the new Robotech toys. On aside, if you grew up in the 1980’s you might remember many scenes just like this, the memory of buying this figure being just one of them. More later on this subject when I review my GI Joe Tomax and Xamont figures. 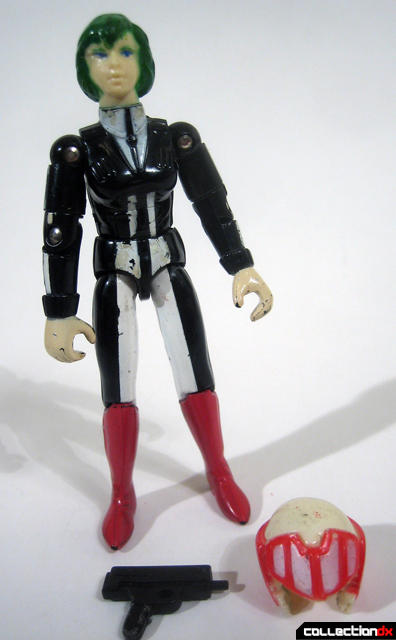 Miriya Black Flight Suit was just one of the random figures I picked up that day. Shortly there after, I started to see the red flight suit version of this figure, which in my personal opinion looks better than the black flight suit version. It was not until nearly 20 years later, when I started writing about toys, I discovered that this version of Miriya is one of the rarest figures in the entire RDF line. 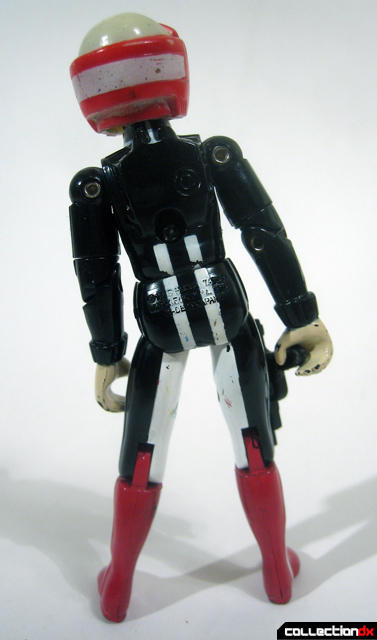 Although the body sculpt, which was also used with the Lisa Hayes figures, is passable as 1980’s toys go and the helmet sculpt does a great job capturing the lines of the Macross Valkyrie pilot helmet, the face sculpt looks nothing like the character in the show. Other than the green hair she looks nothing like Miriya and more like a snotty self absorbed East Coast art student. 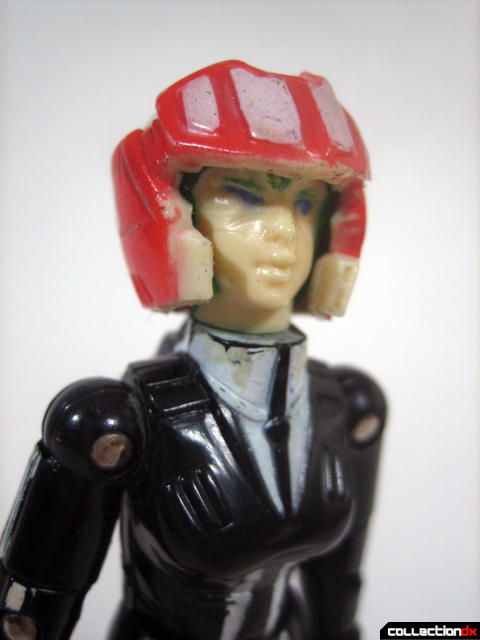 Essentially, Black Flight Suit Miriya is just a recolor in which I believe the common Miriya Red Flight Version looks better overall. But for the Robotech Defense Force completist, it is one of the more difficult and expensive figure to locate to complete the collection.

©2011 Article and Pictures by Leonardo Flores

Hey now, I know plenty of snooty artists live in the West Coast as well. ;-)

Yes, but this one looks like an East Coast one!

No, not Macek. Carl Sagan!

What am I talking about? Well, I was looking at the very first picture and decided to do an experiment. My roommate is a big Macross fan but has little familiarity with the Matchbox toys. So out of context and with the text hidden, I showed him the first picture of Miriya and asked him who this figure was meant to represent. His first answer was, in fact, Carl Sagan! XD

After I finished howling, I gave a few more hints, then finally revealed the identity, and he was in total shock and disbelief. So ironic these were manufactured in Japan...

Microbry, I could delete my review and replace it with your comment and it would still speak volumes!

I saw your Carl Sagan story and it made me spit out my coffee this morning in uncontrolled laughter.

I actually see the resemblance to CS, albeit a green-haired, possibly evil version of the beloved cosmologist.