Hey look, it's a review of an ACTUAL ROBOT on CollectionDX. How cool is that? Normally we don't go in for this sort of thing at CDX but the folks at Wowwee sent one over and we figured, what the heck, why not?

This here is MiP. According to Wowwee it's the first balancing robot with GestureSense technology, whatever that means. It's a cool little bot that balances on two wheels much like a Segway. It's got a series of built in modes for stand alone play as well as an app companion that unlocks the true potential of the toy.

The box is nice and compact, with multi-language blurbs all over. The front flap opens for a view of the robot. The text is a bit dense in places. 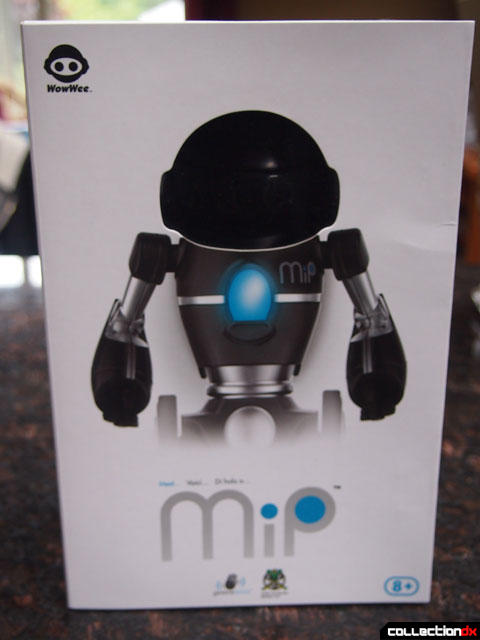 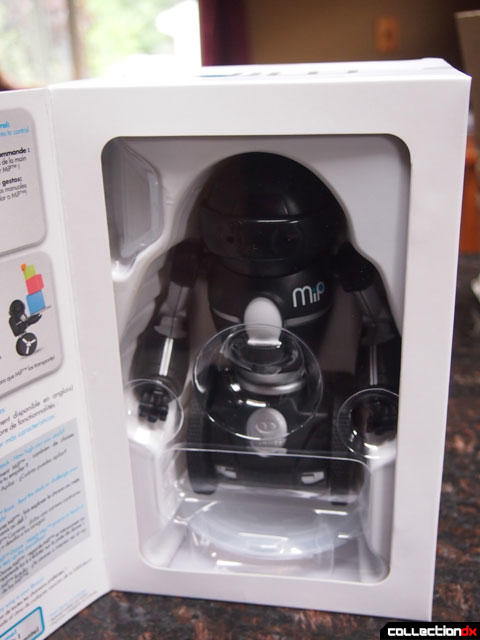 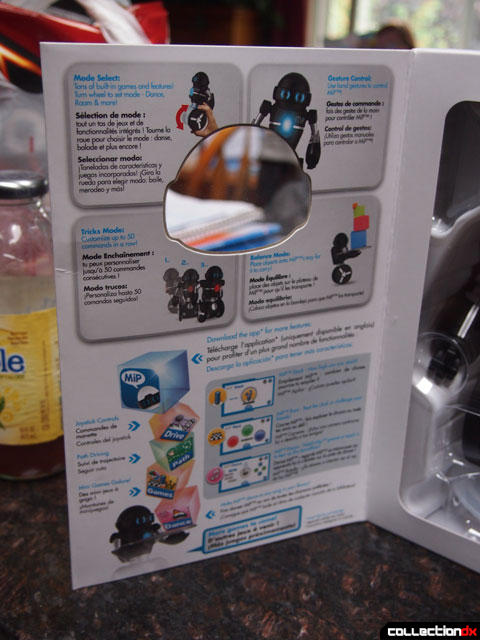 MiP is available in both black and white. 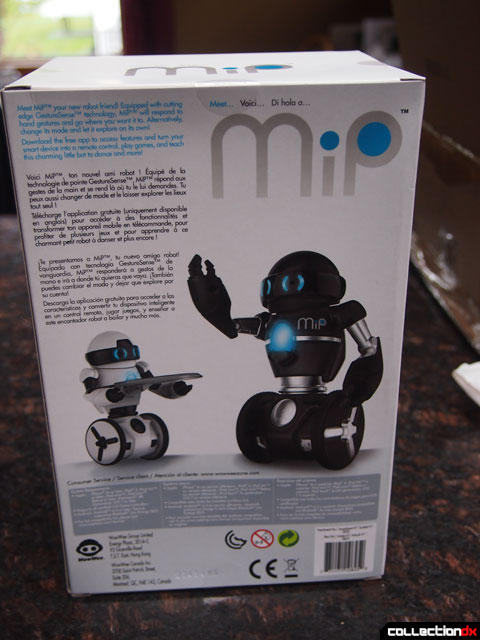 The toy has a fine matte black finish with silver accents. Each wheel has a rubber tread and the arms are poseable. The arms DO NOT move as part of the robotic function. 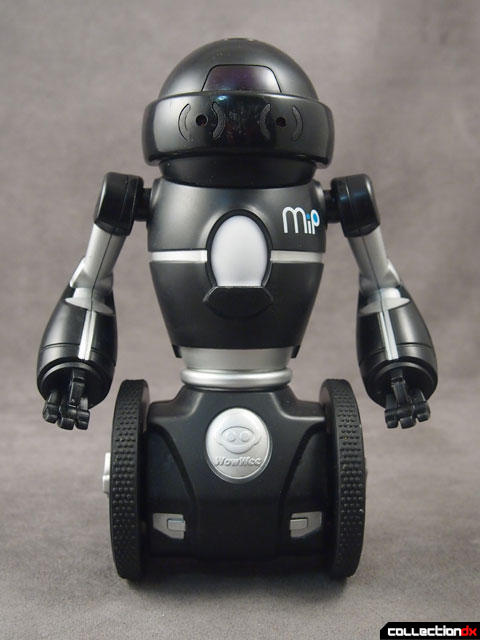 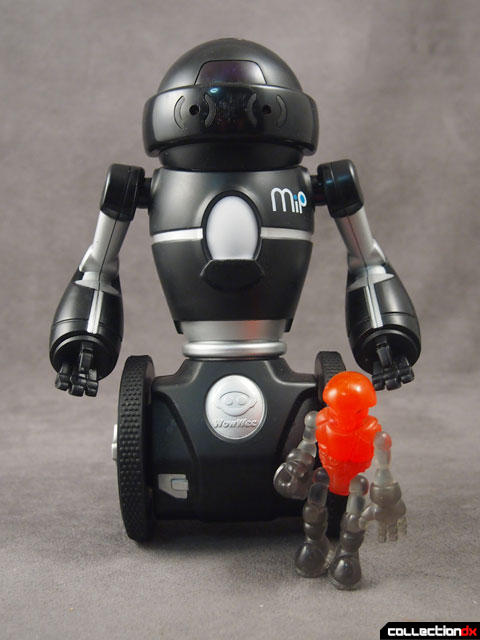 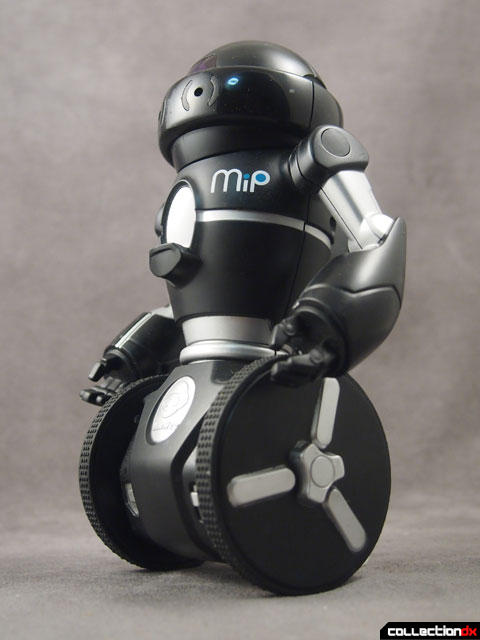 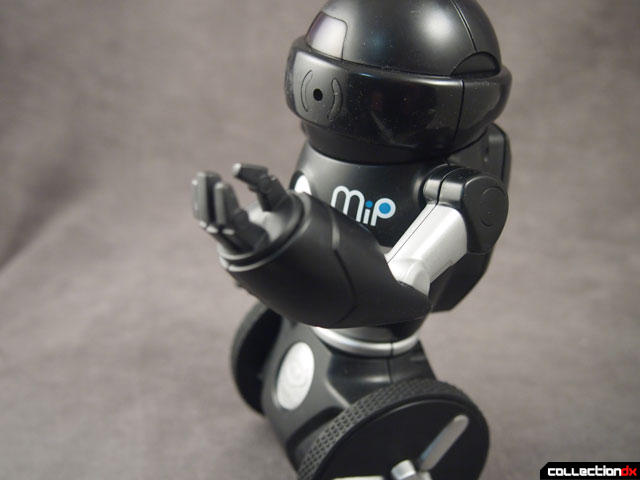 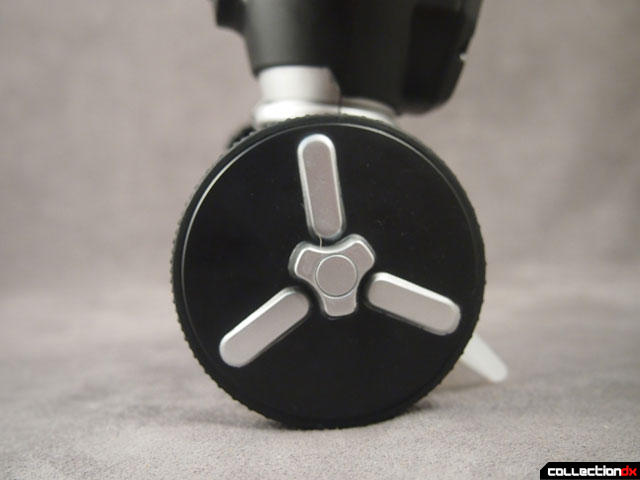 A small stand is provided to display MiP standing up when not powered on. 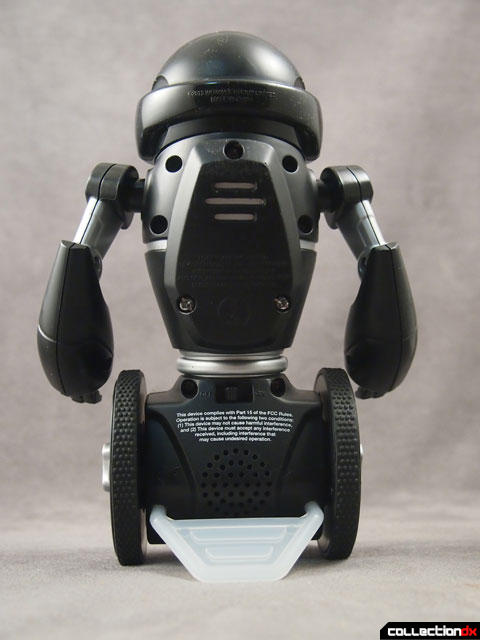 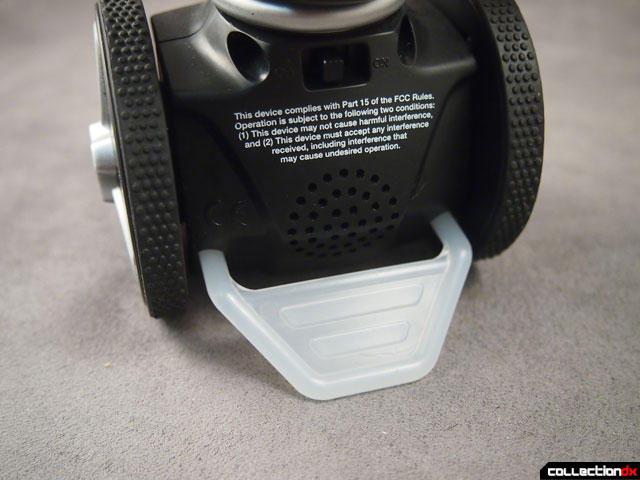 MiP requires 4 AAA batteries which can be installed in the back with a screwdriver. 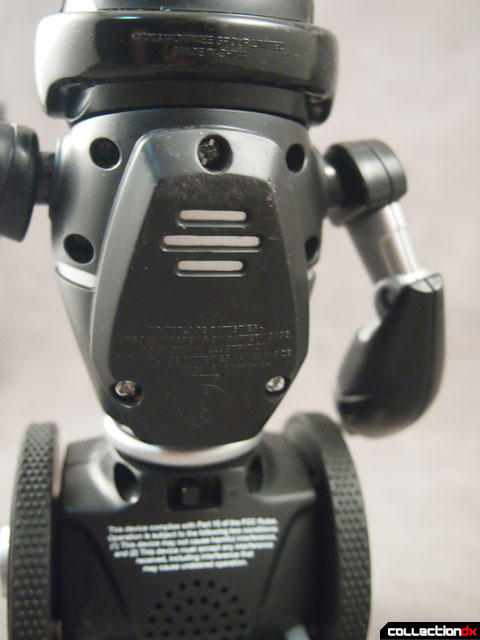 Turn the switch on and MiP springs to life in his default mode. You have to hold him upright for just a second until the gyroscope kicks in. 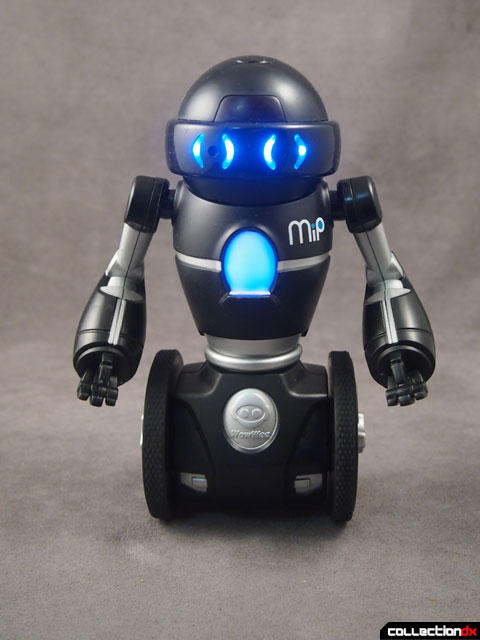 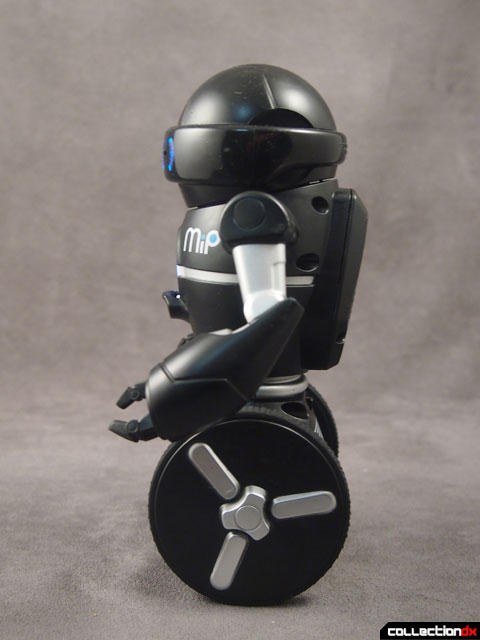 MiP has six modes that can all be selected by turning the wheel. Mode is designated by the color of the light on his chest. 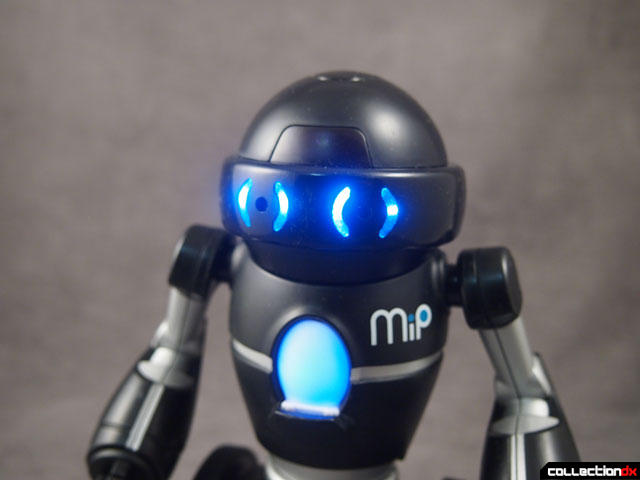 TRACKING - Play follow the leader with MiP. move your hand towards him and he rolls back. swipe your hand and he turns. I could never get it to follow me though.

DANCE - Pretty self explanatory. MiP dances to his own music. When you use the app, you can make him dance to your music, or design your own dance.

ROAM - My favorite mode. Just let MiP explore. He will avoid objects and just wander. Keep in mind that he will not detect edges of stairs and tables.

TRICKS - Lets you record a series of gestures that with a hand clap MiP will play back. Pretty cool, but you really have to know your commands.

CAGE - Never did figure this one out. MiP is in a virtual cage and you have to block the exits. Seemed a lot lie ROAM.

STACK - use the included stacking tray to see how much Mip can balance before time runs out. He can carry his own weight and acknowledges when new items are added. 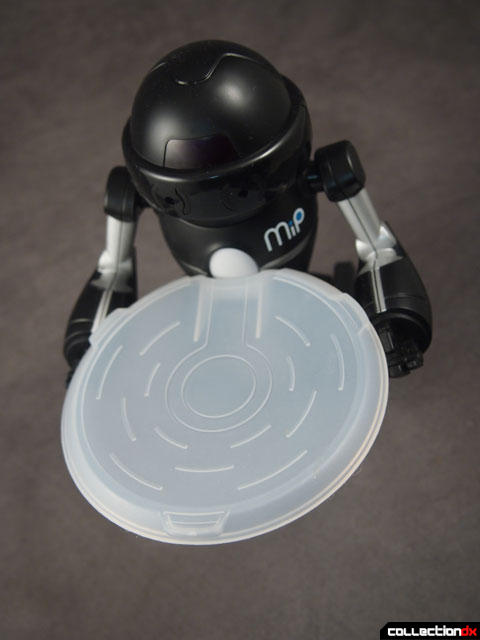 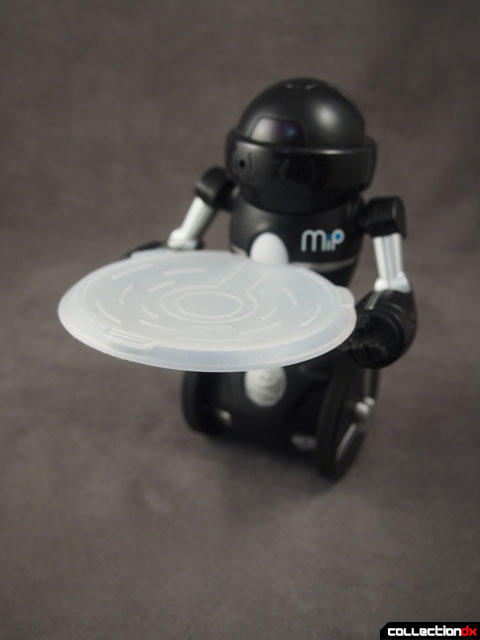 The app adds a whole new layer to the toy with some really cool modes, including a full remote control mode and a mode where you draw a path on the screen and it follows it. However the app has limited compatibility due to the use of a certain kind of bluetooth. Check the compatibility page for details

Reviewing all the scope of this thing is text is daunting, so please watch the video we created. It talks about the pros and cons of the toy. For me it's a pretty brilliant piece of engineering with a few minor flaws.

1. Battery life is not great. Stock up on rechargables. Still, I like that it uses standard batteries and not a special battery and charger.

2. MiP can't tell where stairs start, or tables end. He can take a dive pretty well, but he gets scratched up good. Seems to me they could have put rubber pads where it had common impact areas. 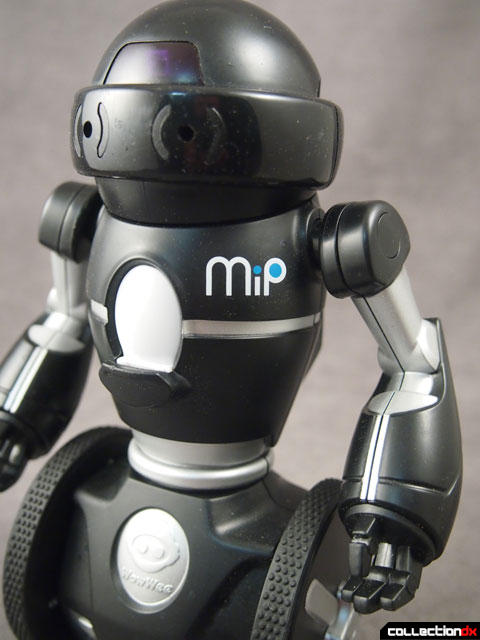 3. The arms don't move on their own. That would have been cool for boxing mode on the app. 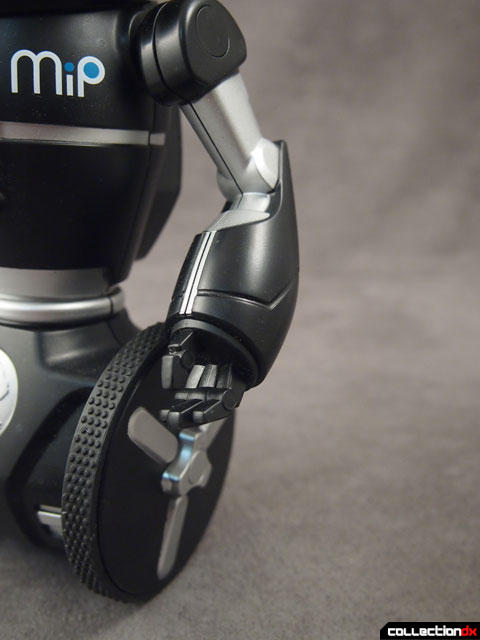 4. Once he falls over, he cannot get up. Maybe that's asking too much at this stage of the balancing robots.

Still, it is very cool, and my kids really enjoyed it. Check out for more information and where to buy.

As long as the arms don't move, we know it's still 3 laws legal.

..If the arms moved.. it gains seventh mode... Kill all humans!