I’m still kind of surprised that this toy was even released in the US. It’s just so big and bulky, and the price tag was pretty high.

The Mezodon Megazord is the US equivalent to the Bakuryuu Gattai DX Max Ohja from Abaranger. In the US it was released as part of Power Rangers Dino Thunder.

The toy consists of two main sections. The Stryracozord is a Stryracosaurus dinosaur. Attached to it is the Triassic Megarover, a chariot that attaches to the rear section. The combined unit is motorized – add two AA batteries to the Mezodon unit and flick a switch to make the zord roll ahead, towing the trailer behind. 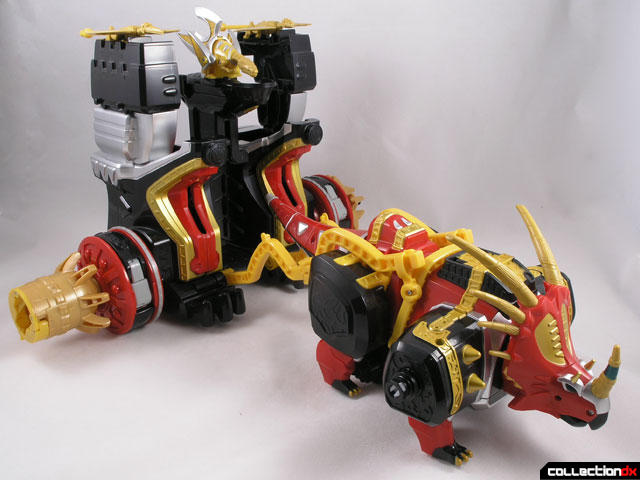 The two axe accessories can attach to the top of the chariot, and the golden helmet zord rests in the middle. The wheels and the spiked sections on the side of the rover are removable as well. The whole unit is hard plastic, with some rubber tread on the wheels for traction. 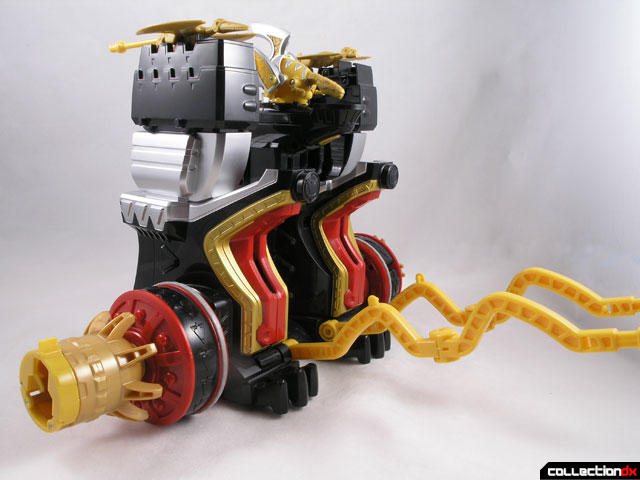 Also included with the set is a Triassic Ranger figure and stand. This figure was not included in the Japanese release, and was presumably added to give more play value. The stand attaches to the back of the Stryracozord and enables the Triassic ranger to ride the zord. 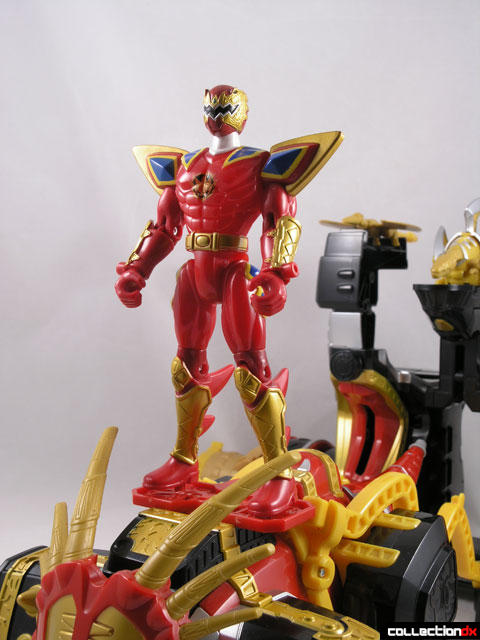 Combining the two units is relatively easy, but be aware that there is a lot of parts swapping going on. It is more like a kids puzzle than a transformer. Pieces are blocky and easy to assemble – its ideal for kids. 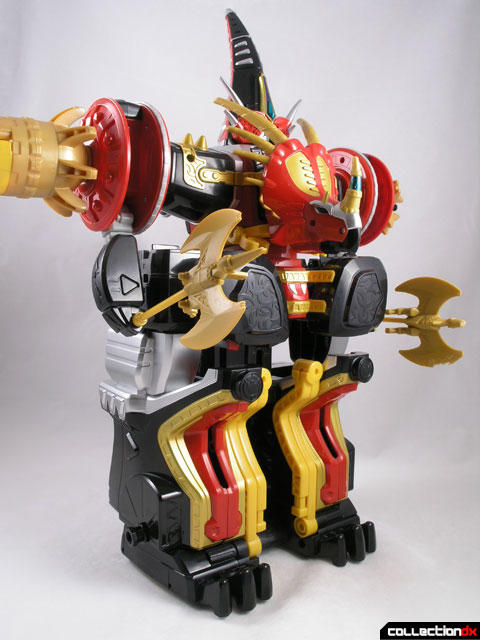 In robot mode, the Mezodon Megazord is huge, the biggest Megazord in the Dino Thunder line. It commands attention, and takes up a lot of your shelf space. In this mode, the battery action is still available. This time it activates the spinning shoulder blades. The Mezodon Megazord can hold either of the gold bird weapons as axes. (Note that one axe here is chewed – thanks to my dog). 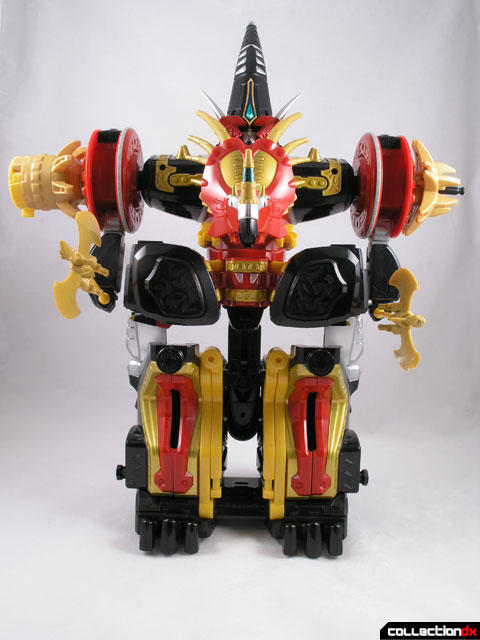 Parts from the Mezodon Megazord can be used to help form another combined Megazord, the Valkasaurus Megazord. 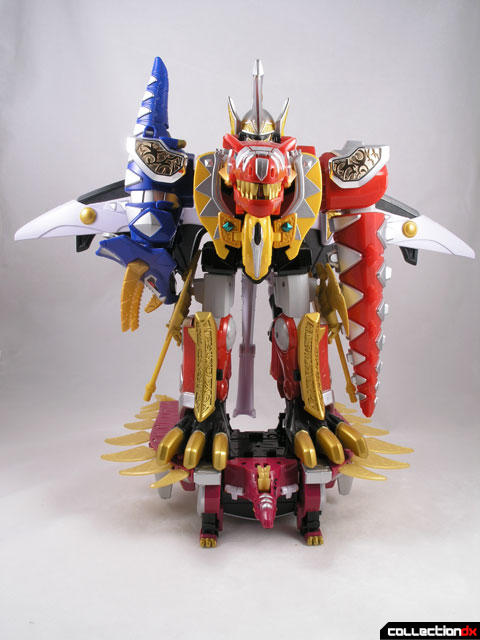 In addition to being one of the largest Megazords, it is also one of the worst in terms of its transition by the hands of Bandai America. They really did a disservice to the US consumers by releasing this toy the way they did. 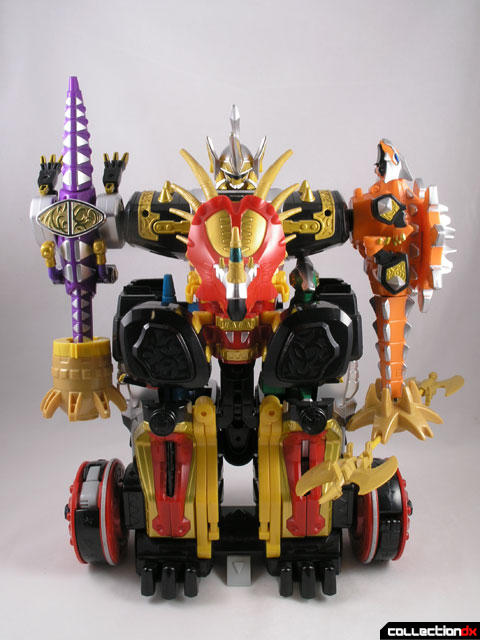 First of all, one of the key points of play value in the original toy was that the Max Ohja could combine with the four supplemental Bakuryu to form Maxryuuoh. In the Power Rangers Dino Thunder show, this form is called the Tricerimax Megazord. It is the ultimate expression of power in the TV show. Well, for some reason, Bandai America decided NOT to release one of the dinozords required to make this combination. So not only are you paying a ton of money for this toy, but you can’t even make one of the main Megazords with it! This resulted in prices on the secondary market for the Japanese Bakuryu to go through the roof, sometime fetching hundreds of dollars. Now that the show has been off the air, the prices have cooled, but they are still in demand. Two of the Zords were released in a separate set, why did they not add the Cephalazord to the set?? 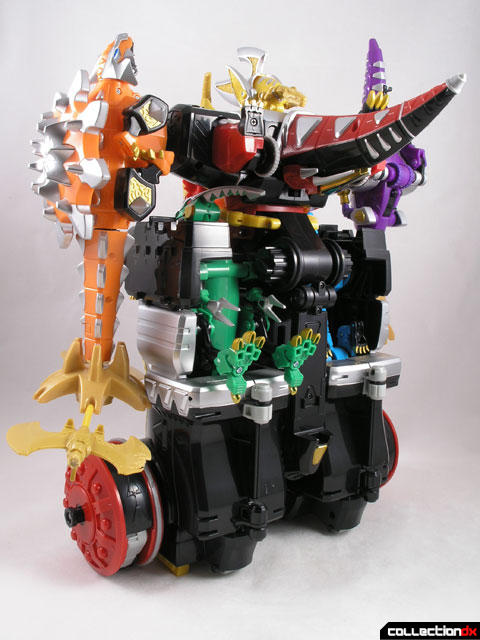 If you do manage to track down the other Zords, you can form the Tricerimax Megazord. This mode changes around the transformation a bit and adds on the following four zords:

The Cephalazord becomes the right arm, and when the power feature is activated, the arm has a punching action. This Zord was not released in America

The Dimetrozord goes into the compartment on the right leg. It has no action feature in this place.

The Parasaurzord was found in the Dino Stegazord set and goes into the left leg. It has no action feature in this place. This toy was available in the Dino Zord set.

The  Ankylozord becomes the left arm, and features a spinning action when activated. One of the gold wheel parts attaches to the end and then the two gold spears attach to that, making a powerful swirling attack. This toy was available in the Dino Zord set.

We all know Bandai America has a tendency to remove some paint applications during the process of bringing sentai toys to the US. But this time they got ridiculous. If you see the original version of the toy – they look completely different. All of the gold chrome and silver paint is gone. Paint detailing on the weapons is gone. All of the paint detail on the arms and feet is gone. Sure, we got an extra Triassic ranger, but was it worth it? Was it worth losing half of the play value and half of the paint applications?

I think Bandai America knew this toy was doomed from the start. The prohibitively high price and it being a TRU exclusive meant to me that they had no faith in the product. If Bandai thought they were throwing the fans a bone by bringing this over like this, they were mistaken. Fans would rather it not be brought over at all than be done like this. 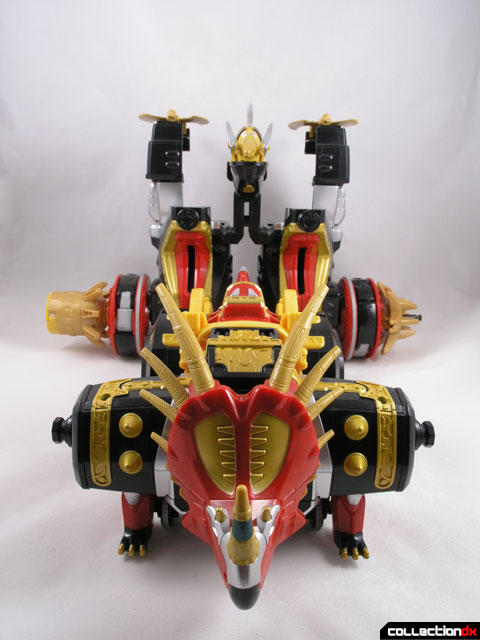 Don’t get me wrong, it is a fun, sturdy toy. Taken on its own, out of comparison with its Japanese counterpart,  it is a good toy for kids to beat on and re-enact their favorite scenes. But I bet kids look at this thing and think “This doesn’t look like this on the show.”

9 comments posted
the english one came with

The EU release came with the Anklyo and Parasaur, as we got no Dino Zord set (we still got screwed over when it came to the Cephala). Just one of the perks of having to pay about twice as much for any given Megazord than you (like the European release of the Delta Squad Megazord having the stickers and side number details, or us getting a Centaurus Wolf Megazord)

If you'd told me that two years ago, I woulda been pissed for you.

We're still on Jungle Fury, for one thing (and I'm gonna wait for the after-Christmas sales to pick up some of the Megazords- shame the most recent PR I watched has my least favourite designs! Oh, well at least it (and Geki) are good for their respective franchises) and the price of the upcoming Goseiger mecha makes me wince. I think I'll just continue collecting SS/PR mecha from the series I've missed...

Actually, EVA, where do you get most of your DX Gattai sets, especially the older ones (i.e. Hurricanger/Gao era)? I'd use HLJ, but that's a bit pricey and only carries the modern stuff.

Well, I got both the GaoRanger and Hurricanger stuff from eBay.

Now to be clear, I have never had an eBay account (no credit card). So what I did was contact the sellers of items I was interested in, and asked them if their item did not sell, could I buy it under-the-counter from them. More often than not, they didn't go for it or it was bought on eBay, but sometimes I got lucky.
This does not violate eBay's policies because no one made offers on their site, and I am buying from them off-site just as any other arrangement offline.

And FYI, HLJ is absolutely swamped with orders for Super Sentai. I can order stuff in May-June, and chances are I'll never get it (like Jumbwhale in 2008). I think they're getting so many orders from PR fans migrating to Super Sentai that they can't keep up anymore!

Right now, I have 5 Origami on backorder with them since October, and chances are they won't fill them before they switch to Goseiger next year. So I'm gonna have to scramble and look elsewhere after production has ended!
------------------------------
CollectionDX Staff

Cyclone Blue
"No Gnu is Good Gnu like Gary Gnu"

What does the japanese version look like, i've been looking for a pictur and cant find one