Metaluna, a home to weird people, war, and their genetically enhanced slaves. Those slaves—the Mutants—work without question on the surface of Metaluna, working for their over bearers, oblivious to the war around them.

With this, Diamond Select Toys gives us the Metaluna Mutant from the Universal film entitled The Island Earth! Part of their Retro Cloth Series monster line, the Mutant emulates the classic MEGO style dolls and does it quite well. New and original fans alike, this toy is sure to please.

Aesthetics:
The Mutant gets all the film and MEGO cues correct. The colors are dirty and muddy which make me think of unremastered celluloid yet still share that unmistakable Technicolor vibe. There isn’t a lot of paint detail going on, and the final result is somewhat simple. This simplicity works well for the MEGO. 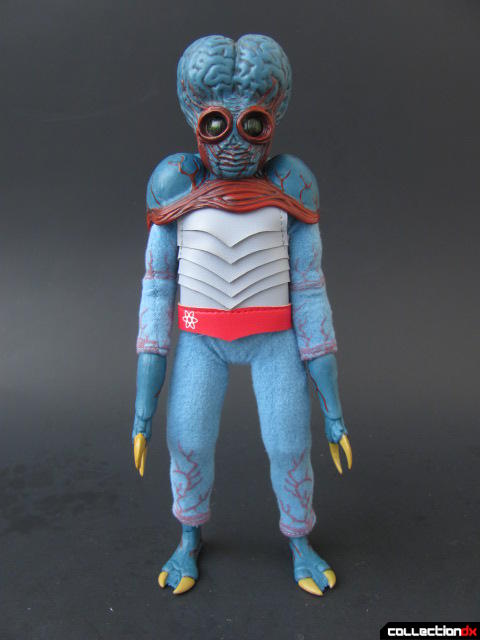 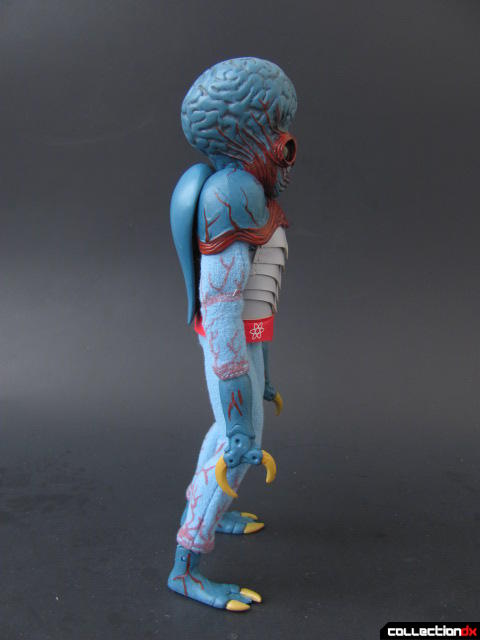 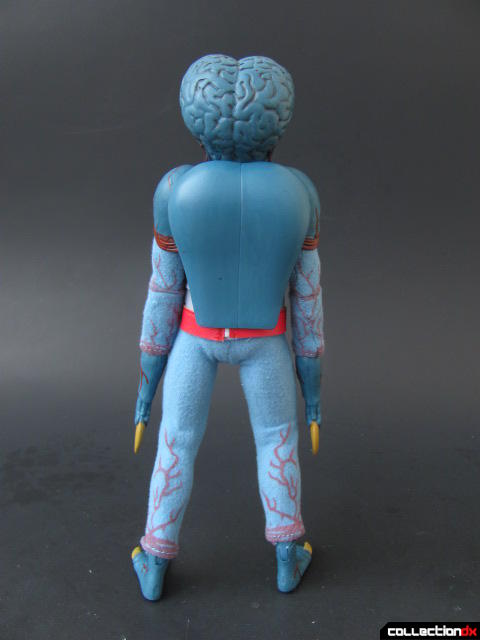 There is a good bit of sculpted detail on this fellow. His brain has wrinkles and the veins on his shoulders, head, and upper chest are all raised and layered. His eye sockets are deeply set in his head. Smoother than his Action figure counterpart, the MEGO Mutant doesn’t share the same level of overall detail; his fabric clothes also cover up and/or replace what could have been sculpted. 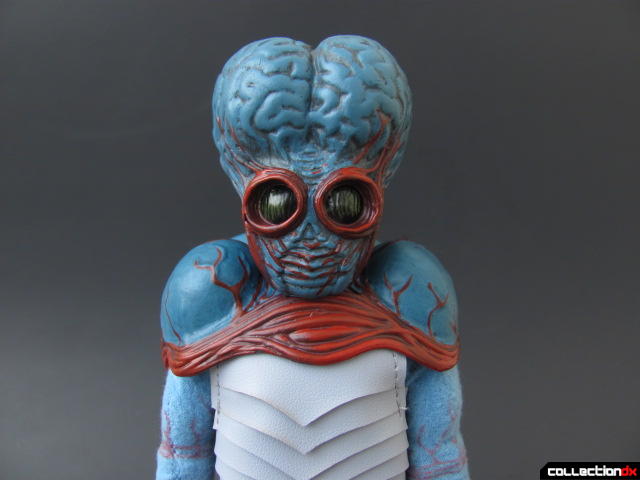 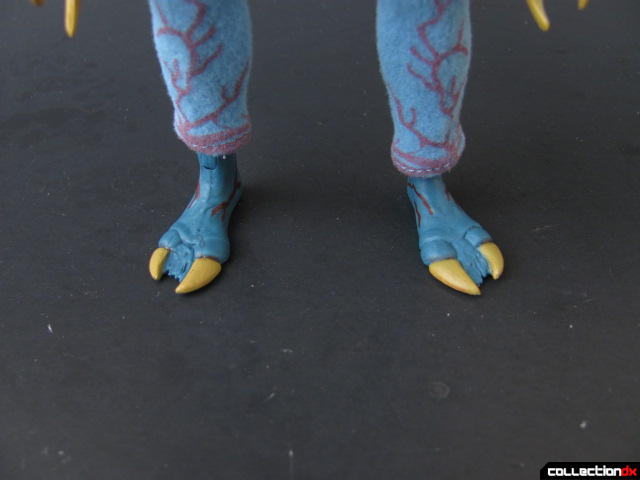 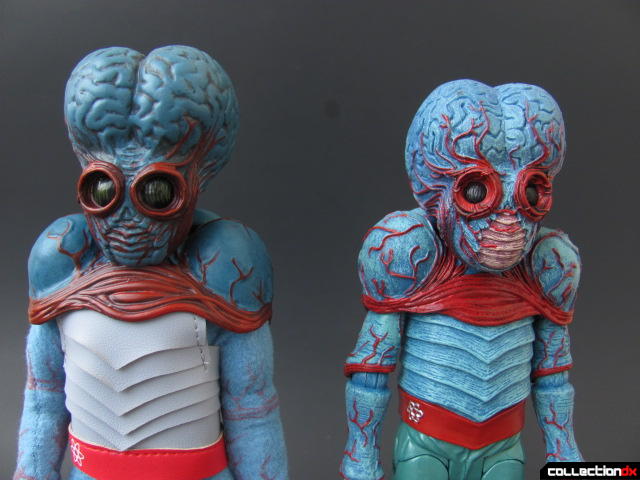 The Mutant’s jammies have dyed detail on them that looks like veins; otherwise, they are a simple blue. His chest is made of layered vinyl. This is to replicate both the film and the MEGO style and it works quite well. 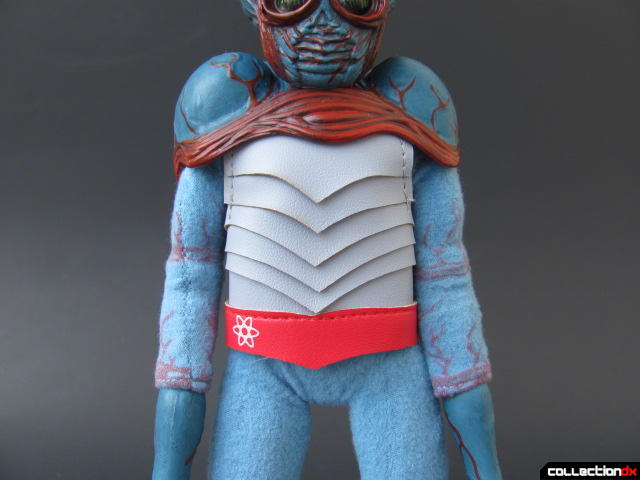 This Mutant, though less detailed and colored overall, looks more accurate to its onscreen counterpart. I prefer the MEGO’s accuracy, but the Diamond Select Action Figure has more flare. 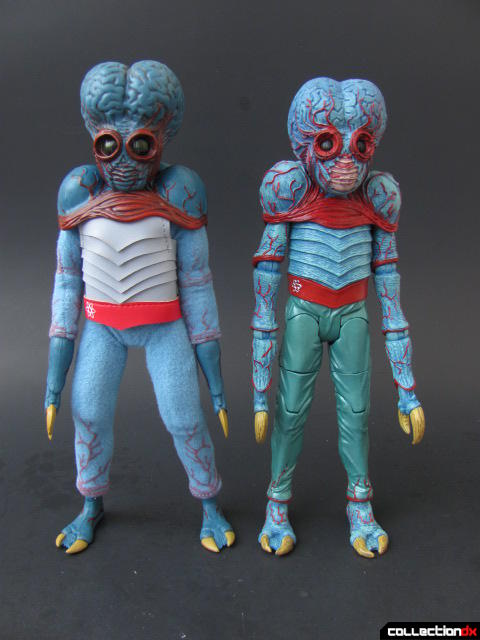 Articulation:
The Mutant moves kinda all right, but he still moves better than his action figure brother. Sporting a swivel head, hinge knees and elbows, wrist swivel, waist joint, fabric thigh joints, and ankle hinges, the Mutant can move pretty well with the majority of his joints moving up to and past 90 degrees. Being made of softer material, the MEGO mutant can move without being hindered by much more than the hard plastic parts of him (like his chest). The MEGO fabric allows for a wider range of motion. 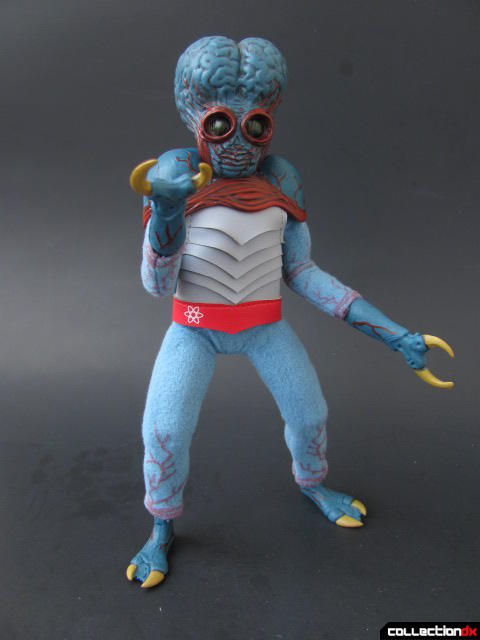 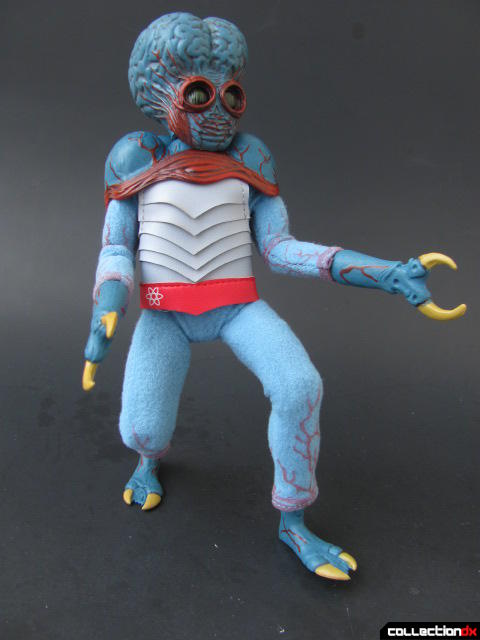 Which still isn’t a lot.
The fabric joint of the Mutant’s hips also don’t allow for too many poses to be held, so you’re stuck (again) with him simply looking menacing and standing kinda differently. 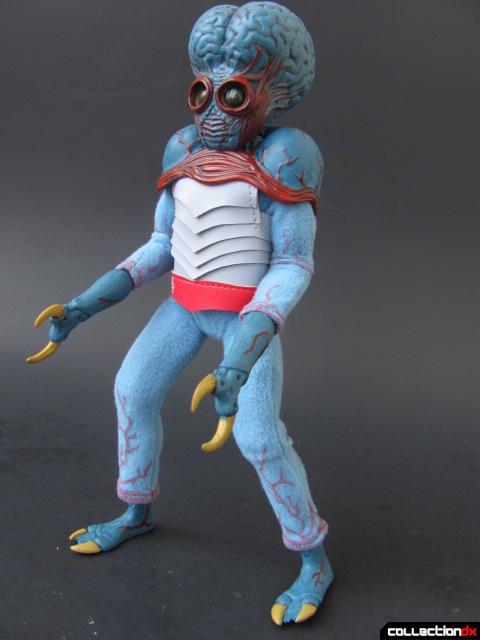 The MEGO Metaluna Mutant stands at about 8.5 inches tall. 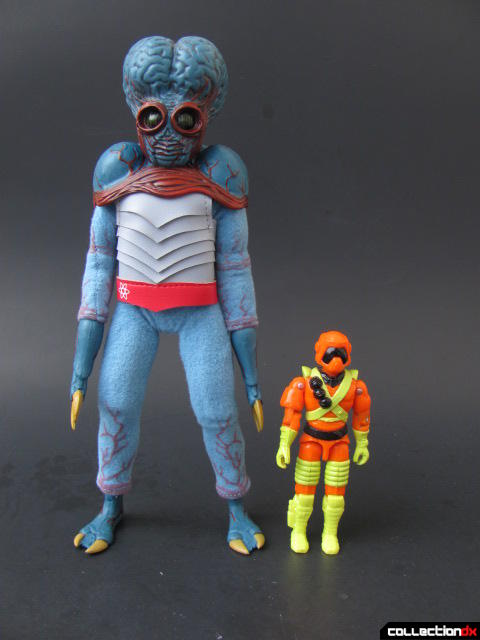 Gimmicks:
The Mutant’s gimmick is that he faithfully emulated the retro MEGO figure line.

Closing Remarks:
The MEGO Mutant is a cool toy. Scratching that retro figure and monster itch simultaneously, it succeeds in being an interesting toy with a lot of good going for it. It moves well enough, looks good, and plays well. If you like the Mutant or just MEGOs, then this will be sure to please.

Just keep them separated; they are known to get jealous. . . 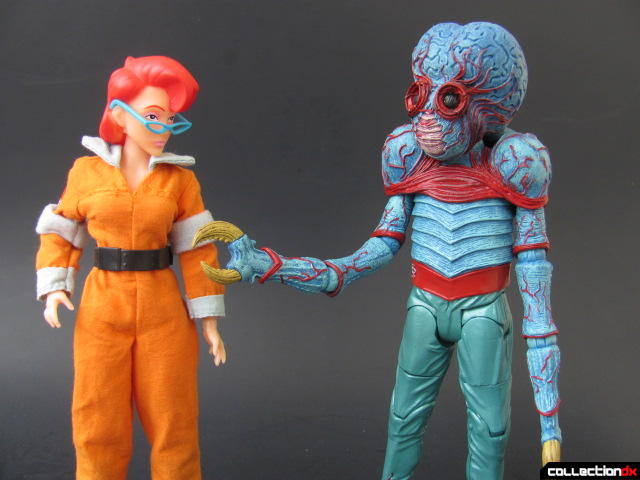 Hey, baby. How’s about you give Uncle Scrotor a hug, eh? 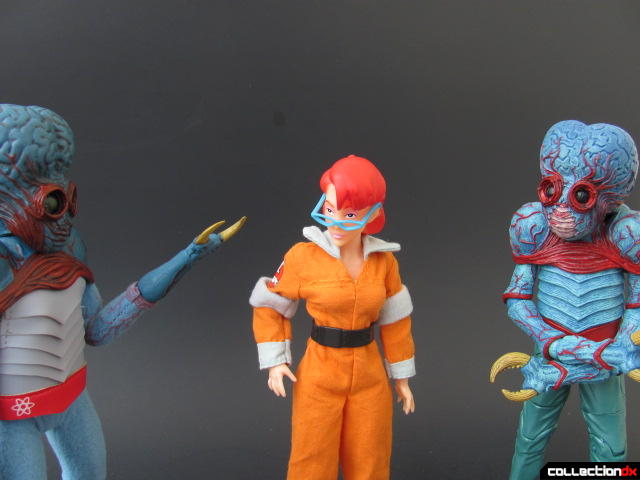 Back off, Scrotor, I, Scrotor, saw her first! She’s giving ME a hug! 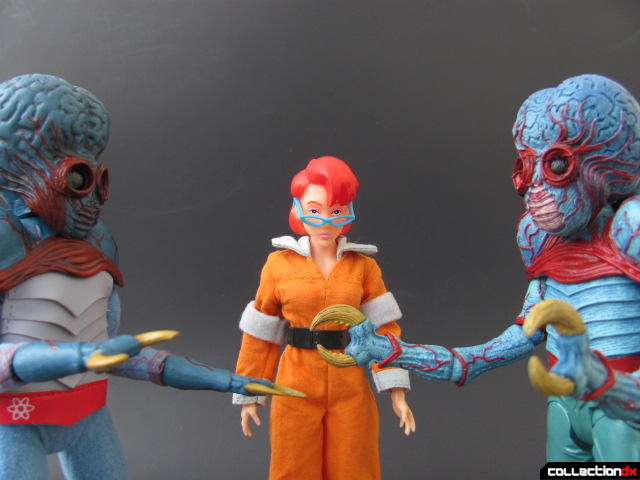 What are you talking about? I was right here (and totally making some progress!) 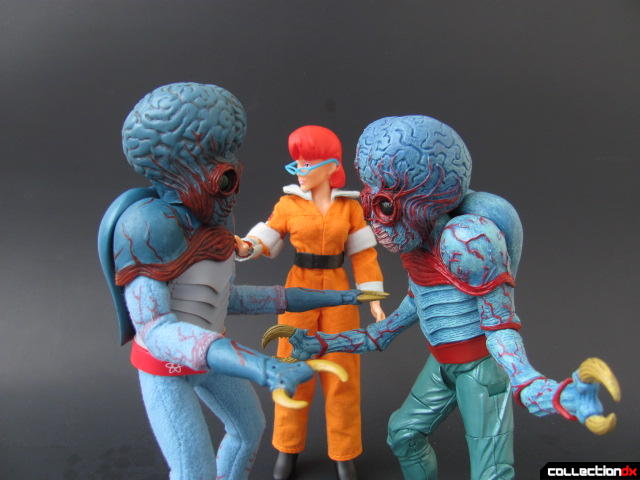 She isn’t into last year’s Mutant; all the chicks dig the retro style now. You’re just plain out of luck! 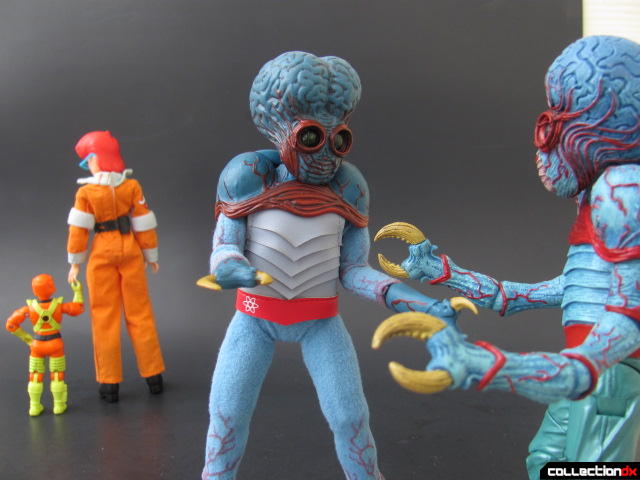 You wanna say that to my face, Mr. Pajamas?! I’ll teach you--