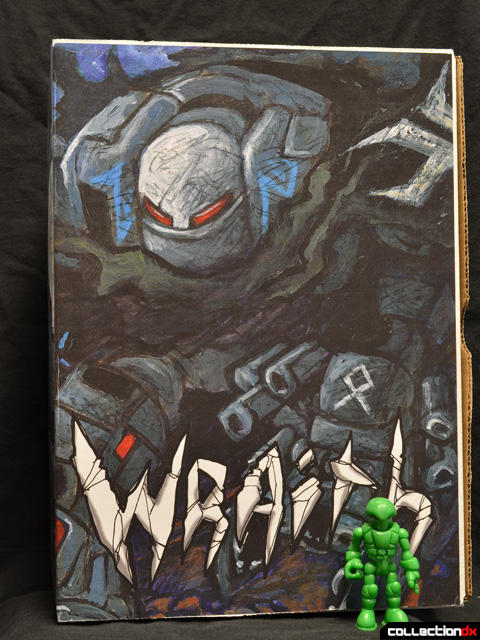 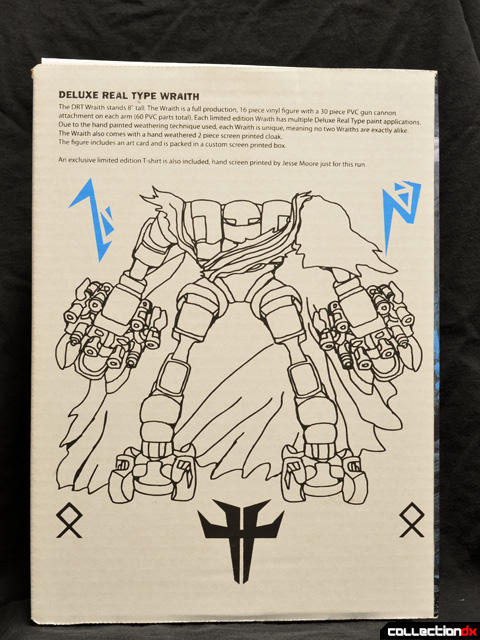 As I mentioned in the Hexxer review, each DRT release comes in a printed box.  The Wraith's box is massive and covered in detail.  Inside is the figure, a hand silk-screened t-shirt, two art cards, and a full-color printed booklet on the Wraith. 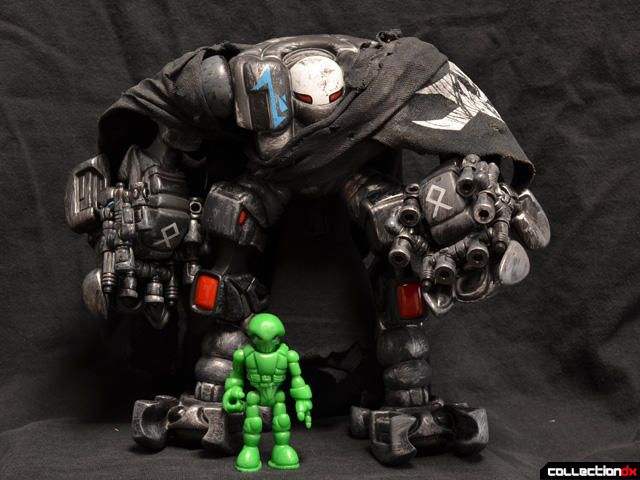 Out of the box, the Master Wraith stands a formidable ten inches tall, but that can vary depending on pose.  The Wraith is made from 16 vinyl parts from the Glyos and Callgrim lines, and two 30 piece Warp Gear weapon assemblies. 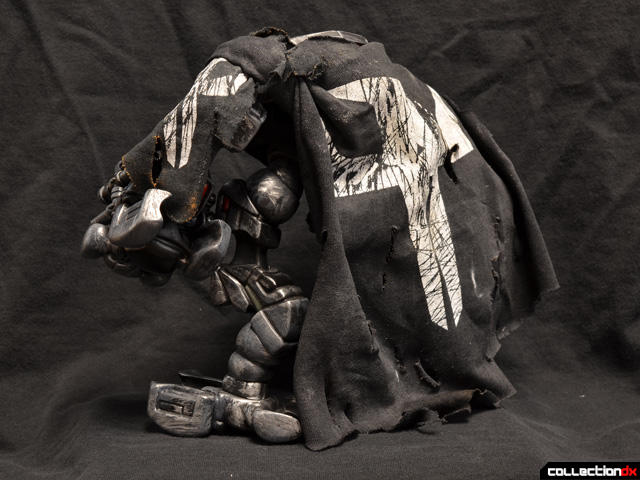 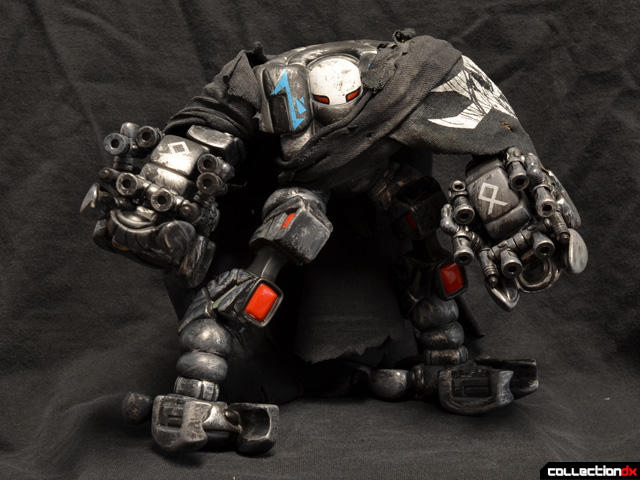 Because the Wraith is made from vinyl parts, every piece is movable, making for incredible articulation.  The combination of Armodoc limb parts with Warp Bike chassis make for great movement due to the angled joint cuts. 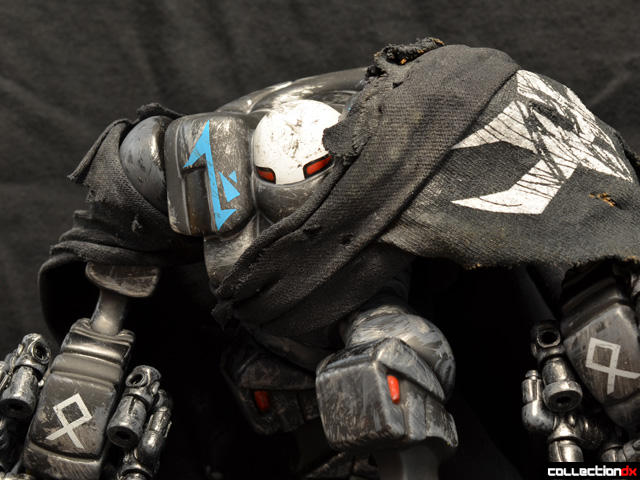 The Wraith is fully painted and features sharp markings.  I assume the markings are tampo-printed like Matt Doughty of Onell has been experimenting with.  The booklet packaged with the Wraith explains their meaning. 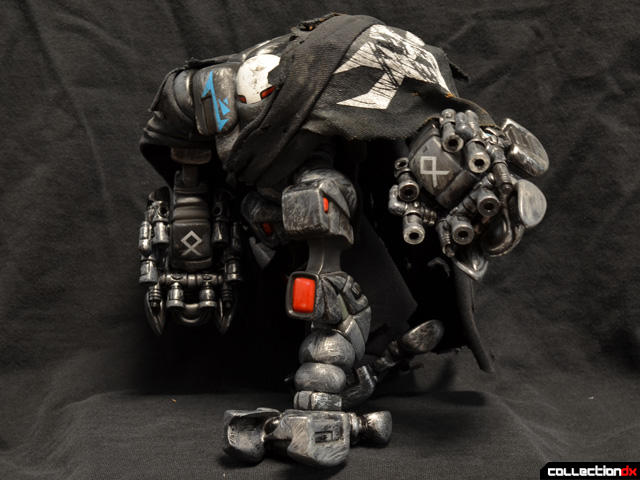 The Wraith is a hulking figure, but thanks to its rugged vinyl construction is totally safe to handle and will stand up to normal play no problem.  I've already wooshed mine around, conquered a few villages, and dropped it at least twice. 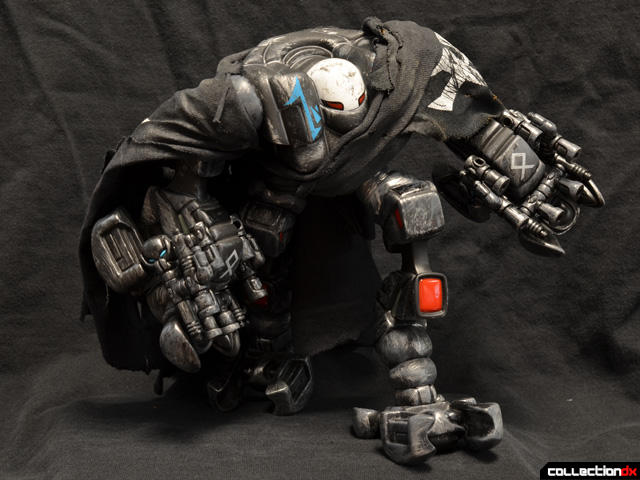 I should mention that the bulky torso and the uneven bottom of the feet does make the Wraith a bit top heavy.  I had to fiddle a bit to get it to balance for these photos, but it will stand fine if you have a little patience. 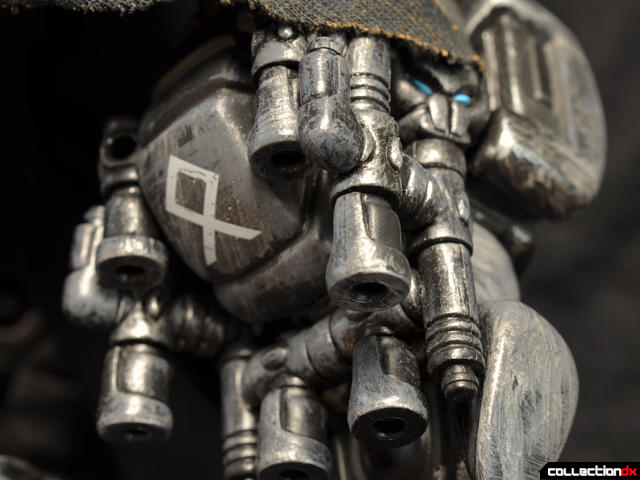 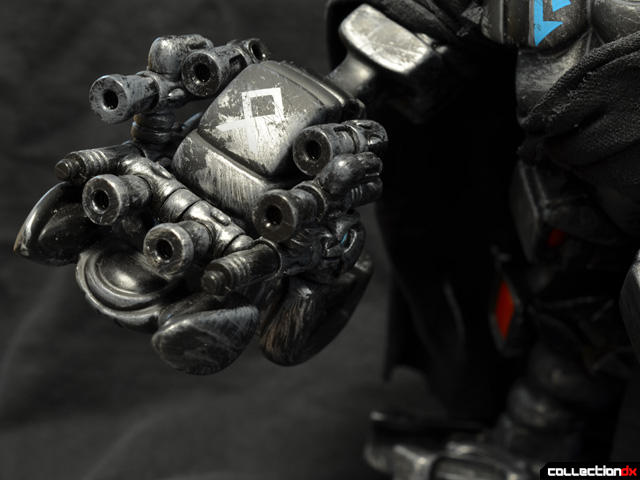 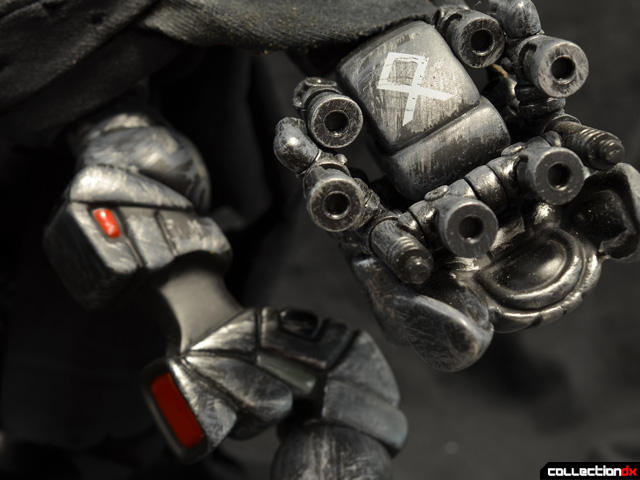 The weapons are assembled from multiple Warp Gear sets, and securely wrap around the ends of the arms.  They fit like they were designed this way, and I was really impressed with the engineering here that required no cutting or gluing of parts. 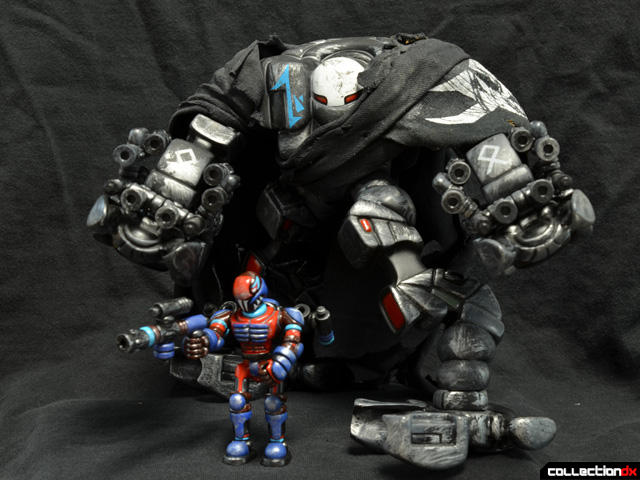 The Wraith is a beautiful figure, but you can't really appreciate the scale without a normal sized figure to compare with.  Hexxer fills just such a role, and the pair looks amazing. 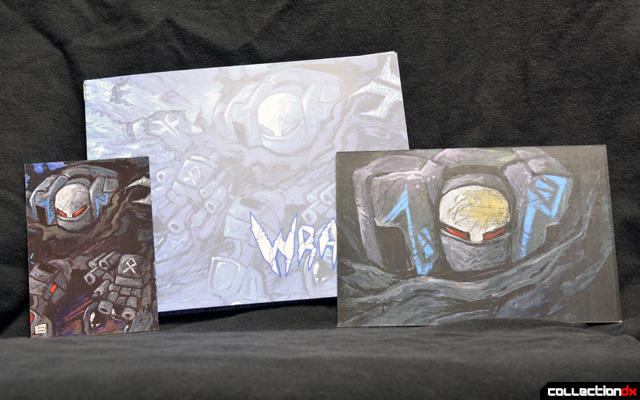 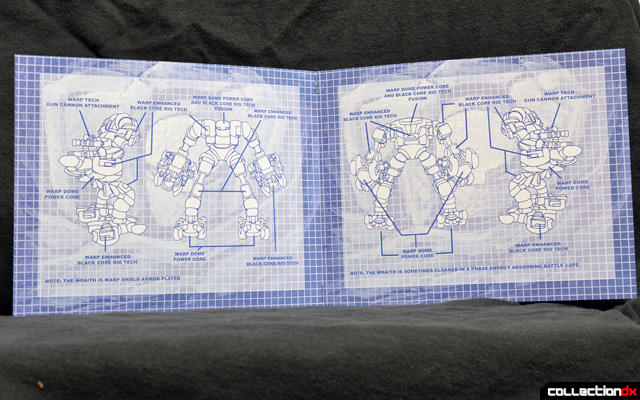 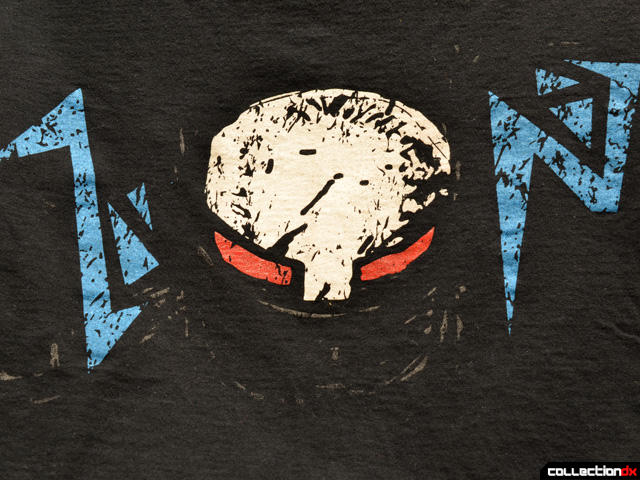 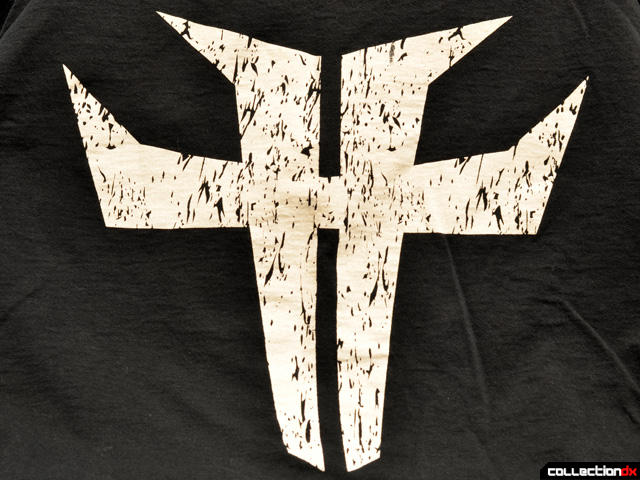 The art card, booklet, and shirt all exude love and care.  Sorry about the glare, but the glossy print is really nice and sharp.  The t-shirt features printing on the front, back, and sleeve. 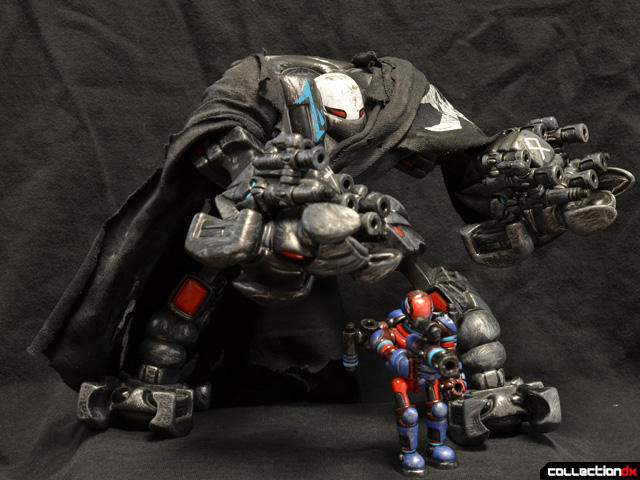 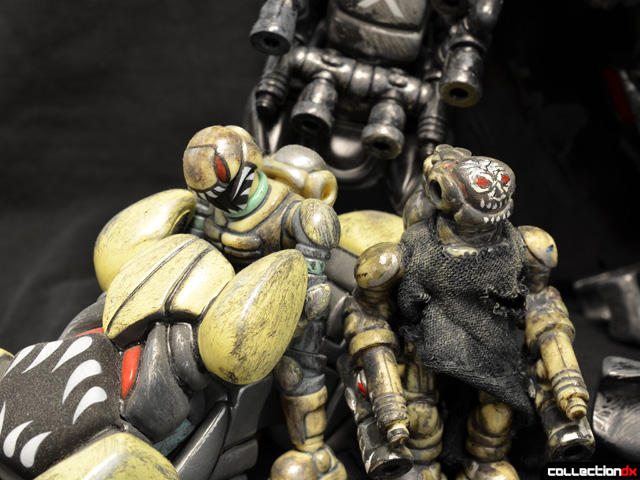 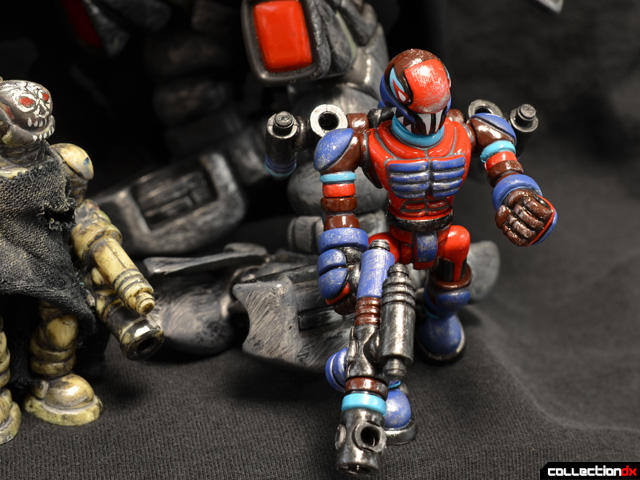 I really could go on and gush about the Wraith all day, but I'll refrain.  What I will say instead is that I am so happy for Jesse at Rawshark Studios.  From the beginning, with the more complex figures and the art cards, it has been clear that Jesse has a very strong and very refined vision for his figures.  He has experimented along the way with ways to bring those detailed visions to life, and they have all been great.  The DRT releases, especially the Wraith, represent something even more to me.  They are the culmination of Jesse's vision that we've seen in his artwork from the first releases, and I could not be more happy to see him be able to release such a creation.  That the toys are rugged, gorgeous, and fun is an added bonus.  Jesse is good people, and I am excited to see what he does next, because I know that it will be awesome. 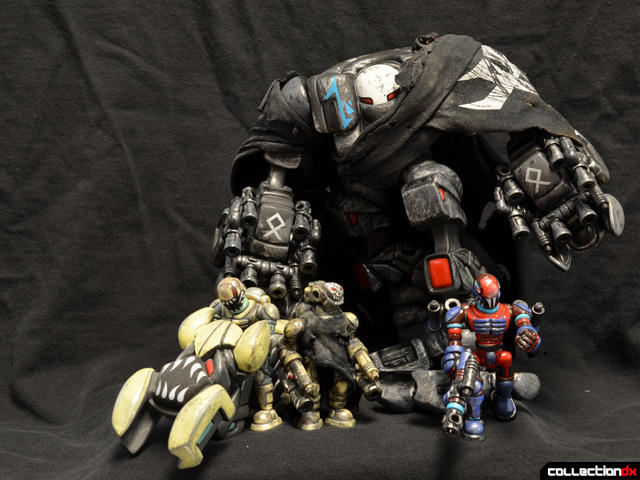 WOW! Incredible progression within the Glyos toy universe in the last few years.

Nice review Ben. Thanks for bringing this stuff out for a more public showcase. Woke me back up! From the first pictures, I never would have realized this toy was so huge. Good to have the faithful Glyos minifig for scale.

I've been buying stuff from the Onell gang since the beginning, sporadically, but have not kept up with what's been going on in the last 2 yrs. The constant acceleration of their development in toys, paintjobs, themes, teams, vehicles, etc., got dizzying, and frankly I started to actually feel fatigue! haha, and I'm just sitting in a chair reading about it. Have to get back in on some of these new releases

. The levelling-up these guys have done is just really cool to see, and yes, I'd echo the comment of being happy to see Jesse be able to produce such stuff, compared to the origin toys. What a small company can have factory-produced is great. At first glance I would've totally assumed these were being hand painted & clothed, by Jesse & the gang.
On my list now!