The real car started life as a standard 1973 XB GT Ford Falcon Coupe, a car exclusive to Australia, and became a classic in Mad Max and an icon in 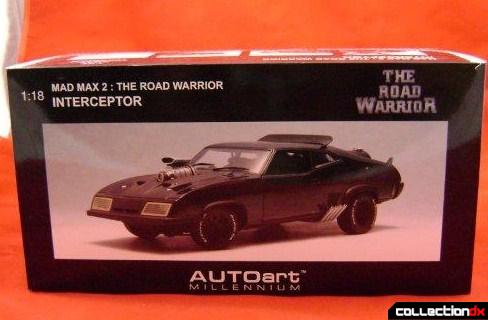 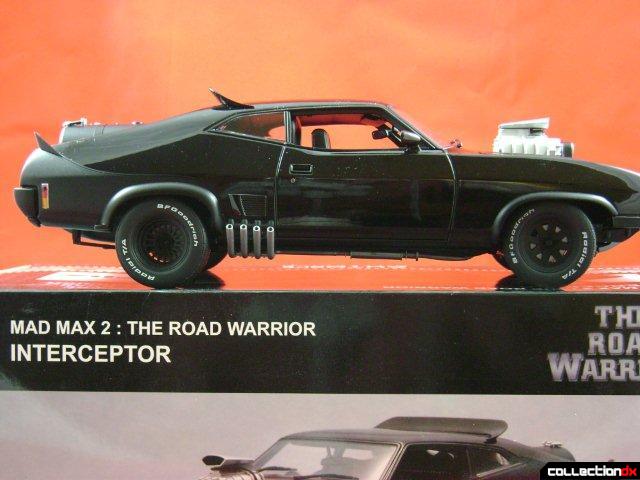 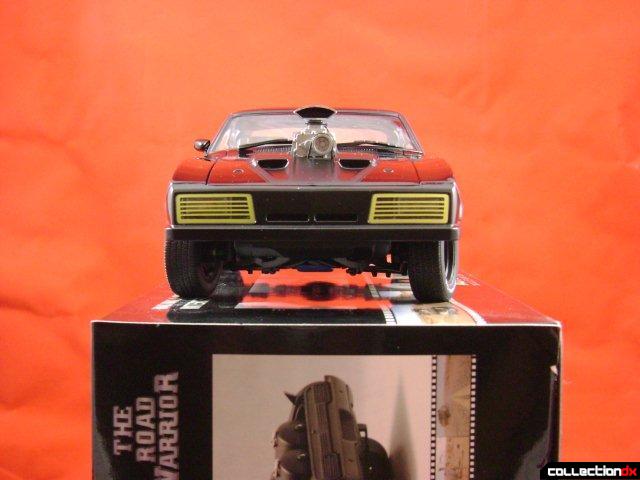 The Interceptor comes with a plastic dog (named "Dog"), two machetes, a real rubber tire with chain, two gas cans, and a box of dog food with two extra cans. 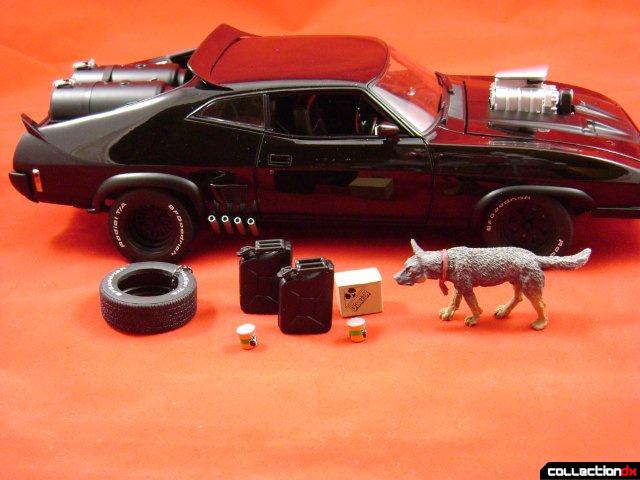 The car is very well made and has a heavy, solid feel, being mostly die-cast. 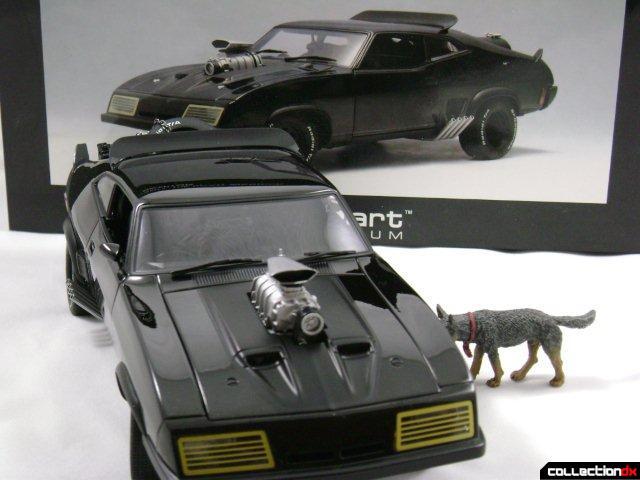 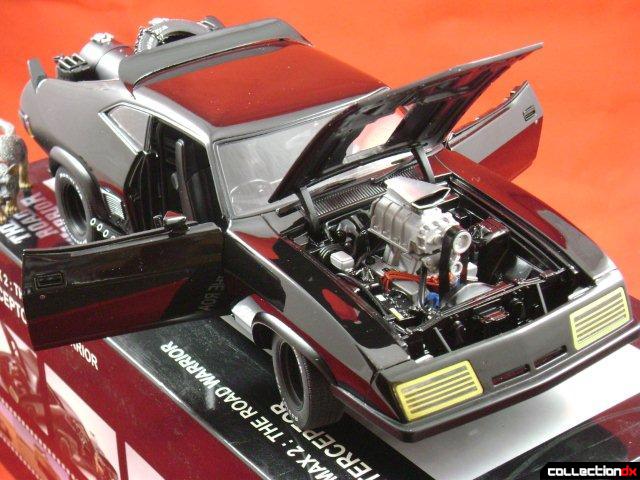 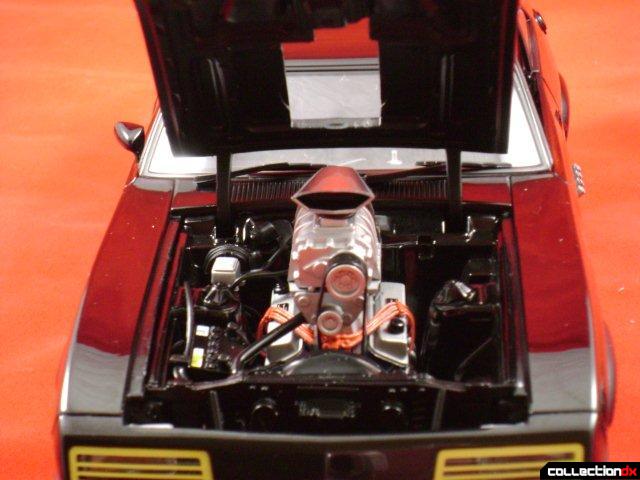 …that even "Dog" wants to get a sniff! 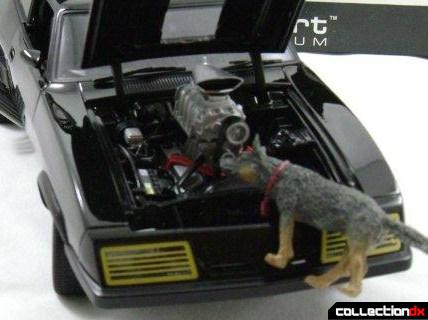 The doors open, the left door has "Dog's" seat 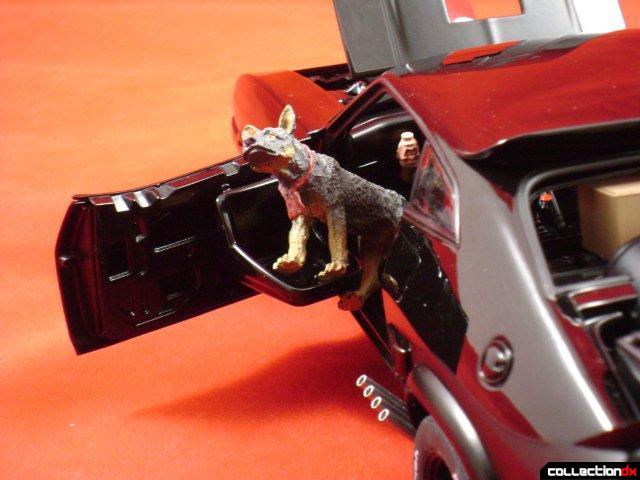 (that does not fit him), so keep him near instead. 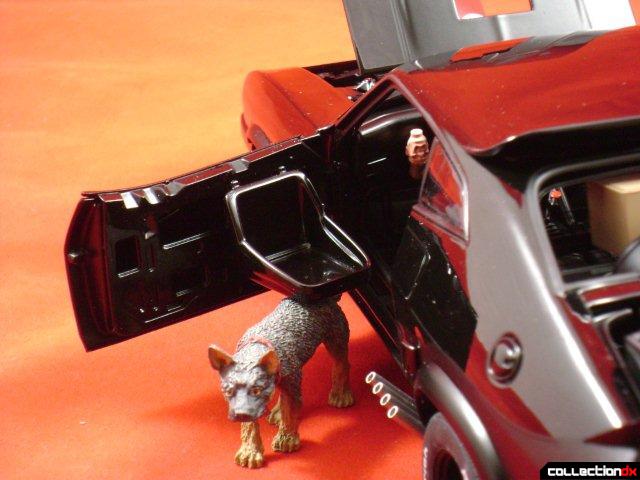 The right door has a sheath for one of the machetes… 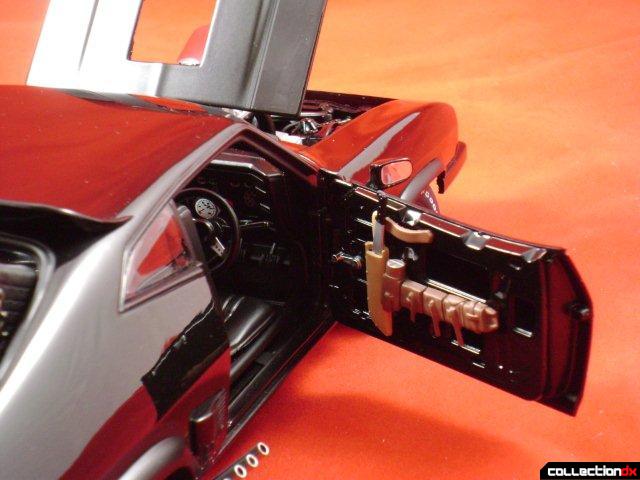 ...the other one goes underneath with the "kill switch" for Max's "booby trap" gas area. 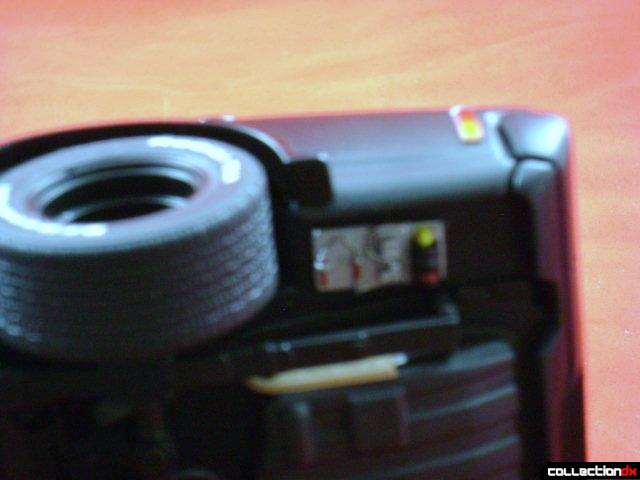 The back part has two added main gas tanks, 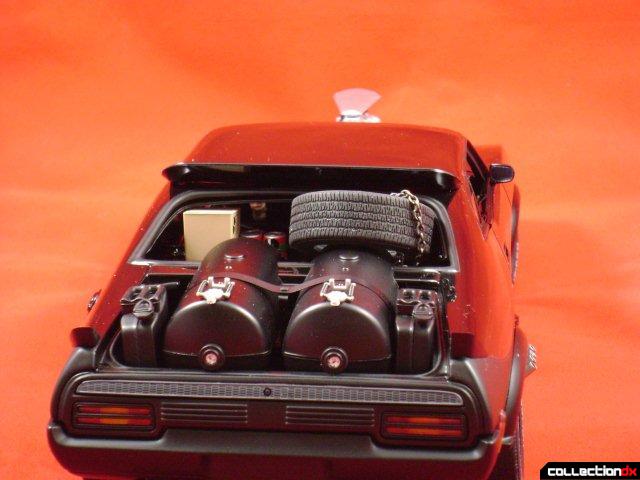 which is where you store the other accessories 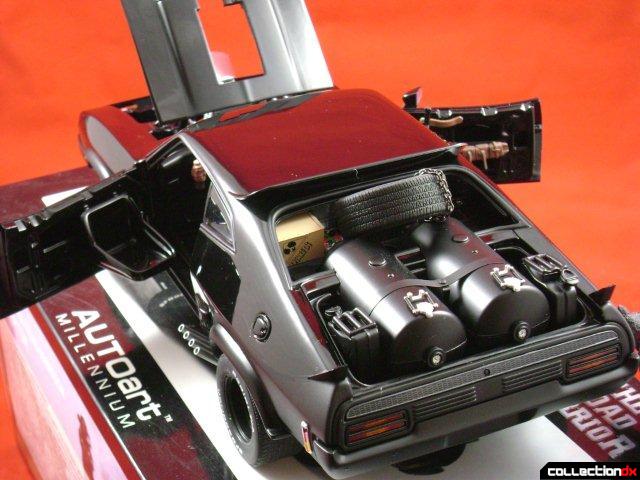 and watch out for "Dog" taking a drink (or a leak?) 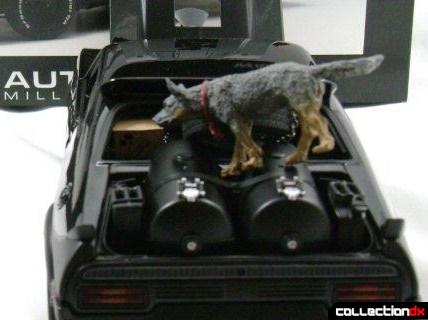 Overall a great item and is impressive in its detail. Even the insides are a fine piece of craftsmanship! 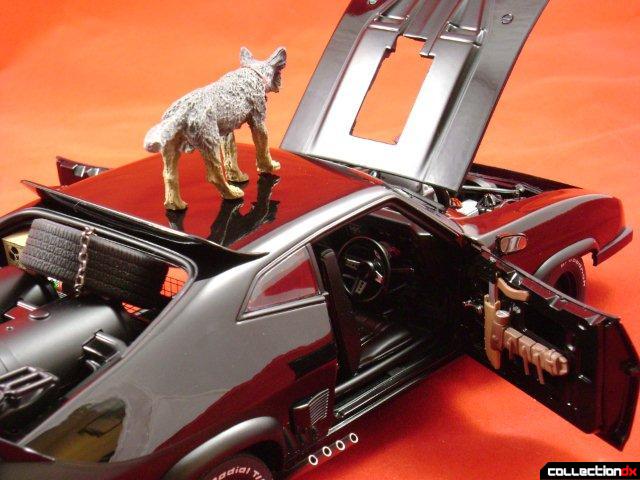 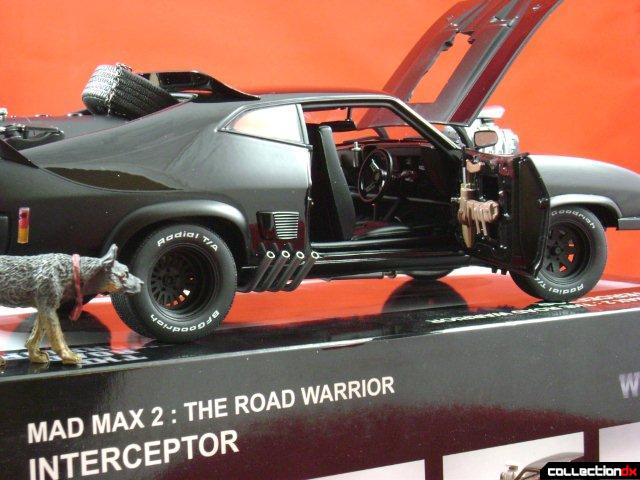 I'm not a car person, so I'm not gonna comment on the review above because that would be unfair of me. (Although, I don't think that's how you spell "booby trap"...)

Heretical as this sounds, I've seen the first two MM movies... did not like either one. You have to see the second to get what's going on in the first, and the second was disjointed. So far as I can tell, the only reason people like these films is the open road and the car in the review above.

was not edited out because " quotes" but you were correct and I fixed.

Wow, this thing is sweet. As a kid I would be entranced by the movie and I would always want to watch it but it only came on once in a while. The second I had a chance to buy it for myself I did. I now have all formats. Mel Gibson is annoying to me now but this movie is darn good. Not for everybody I can tell you that much.

I really want to pick up this piece, and dont get me wrong, it deserves a spot in my collection, but I always get sidetracked with robots. I hope one day this ends up being an impulse buy that I later feel buyers remorse about and then soon after end up being glad I bought because its awesome. Thanks for the review, I enjoyed it.

Can you put a figure in it?

Hell when they made the MM/Road Warrior toys I wanted an Interceptor in scale (that the figures wouldn't be able to sit in because they had piss-poor articulation).

As to the gent above who decried the series - to quote the dude: "Well, that's just like your opinion man."

Having seen the second movie first (as I'm sure a LOT of Americans did since Mad Max wasn't even released in the US when "The Road Warrior" hit movie screens in 1982) I can honestly say that the first movie is completely irrelevant to enjoying the second movie. And that the second movie is NOT just a rehash of the first, it actually has a lot less character arc and story. It's a straight-foward balls-to-the-wall action/adventure flick with great, great car chases. If you can't like it for just that...well I dunno man...your loss.

There's a guy on eBay from Japan who's been making and painting these 1:18 statues that are simply incredible and look great with the car. The detail is amazing. He's sold a bunch so far and they usually go for $175+.

As a kid, my dad and my uncle were obsessed with the 1st "Mad Max" - actually the 1st film was shown in New York City in a theater in Times Square in 1979 or 1980, well before "Road Warrior" made it's way here to the US. I remember standing outside in line with my father in new york, waiting on line for the video store to open, the day of the release of "Road Warrior" on VHS. I remember that it was over $150, and I had never seen that much cash before, or my father so excited to bring it home. It was well-worn out and wouldn't play anymore by the time I hit high school in the mid-90's.

A classic set of films, despite Mel's drunken inexcusable idiocy. I really can't think of a movie that did post-apocalypse better. I also can't think of any post-apocalypse movies that haven't ripped it off utterly, from Terminator to today... Fist of the North Star is a complete stealing of a lot of stuff in Mad Max and I can't get past it to watch the show and enjoy it. Each one of the Max films has it's own vibe (horror, action, fantasy) and are a lot of fun, especially when viewed with a healthy sense of humor.

cool they make figures but more than the car seems wrong somehow...still searching for a scale hans solo for my code 3 millennium falcon...

It didn't do very well.

Most car culture movies then had gone the Smokey and the Bandit comedy route at the time. And I first saw it when I was 11 or 12 on HBO (would have been 1980-81). Most of my gearhead classmates had seen the film by the time Road Warrior came out...The title change confused us, the first film had a cult following by then.

But it doesn't surprise me that younger generations aren't fans. :P

I love the fact that CDX can try something new every once in a while and do a review like this about a model car rather than just stick to robots. Any chance we'll get to see KITT from Knight Rider or the DeLorean from Back to the Future anytime soon?

Quite funny Tuesday a co-worker received a box hot wheels and other car relate items and was going around to every desk asking if people wanted to buy anything. I asked him if he had any kits and he said yes. The kit was the ATM model of KITT from Knightrider! Don't know when or if I will get to it but at least one of us from CDX has one!

I have both versions in diecast...i think a car based on a sci-fi tv show should count on this site...It is why I collect chogokin but have those tow cars the mad max one and some bat-mobiles/Mach 5

Both versions? are you talking about the weathered version? Which do you prefer of the two, I saw the weathered one on HLJ and it looked pretty awesome.

Yeah the weathered version is so much better...because part II was all about wasteland...how could the customize car for an apocalyptic environment... ever be so clean...wish the clean version was the unaltered Mad Max version...but will deal. It goes for like 50 dollars more than regular, so waiting until it hits the US