Heard anything new from the vf100’s line? No? Well, that’s because it SUCKED.

Bandai is never one to give up on a design though, so they have released a similarly scaled VF-25 Messiah Alto Custom in their Robot Soul line. This one comes with super parts, and as an added bonus, doesn’t fall apart or make you want to kill yourself. 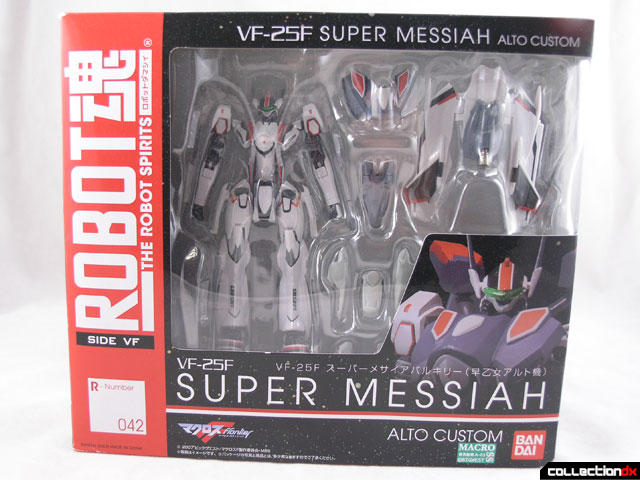 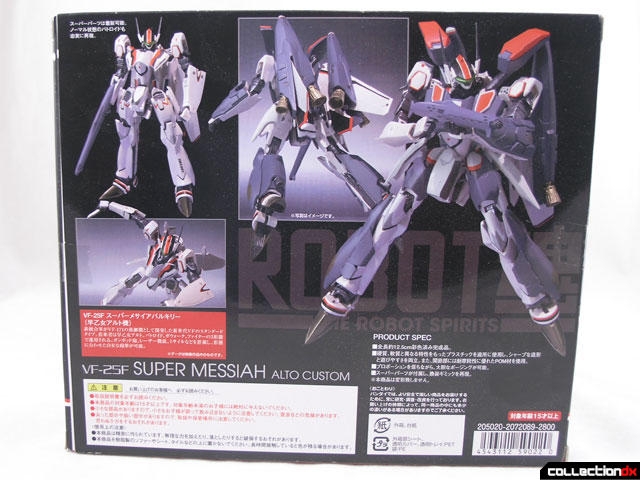 First of all you should know that this toy does not transform. It’s an action figure of Battroid mode, and it does that pretty damn well. 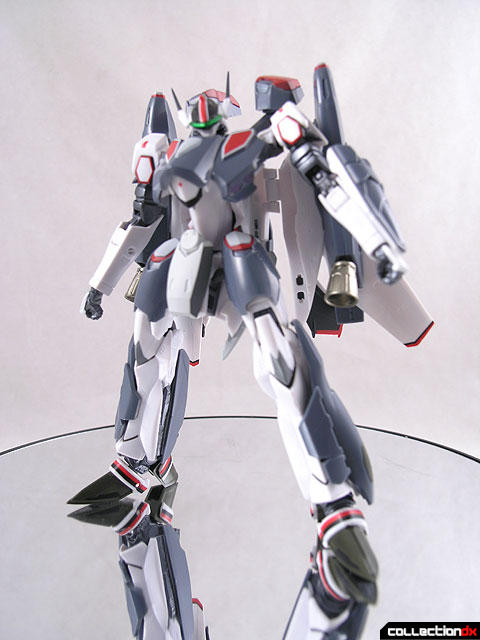 Let’s start with the core figure. The VF-25 Messiah Alto Custom looks great in this mode, and is extremely posable. There are ball joints in the shoulder, head, upper chest, lower chest, hips and feet. In addition, the knees and elbows both have double hinge joints. The feet have a joint in them as well. 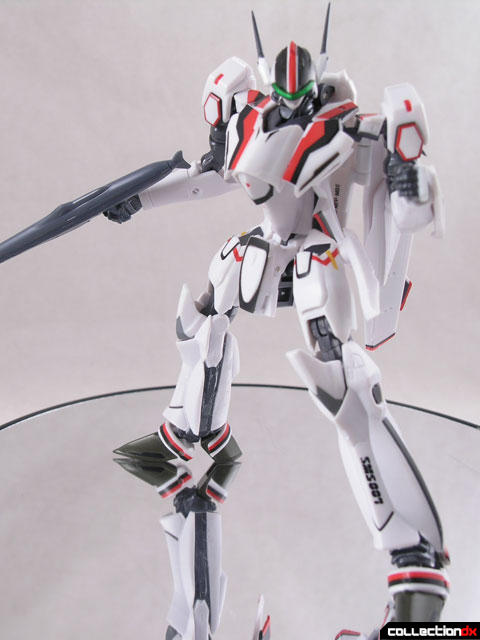 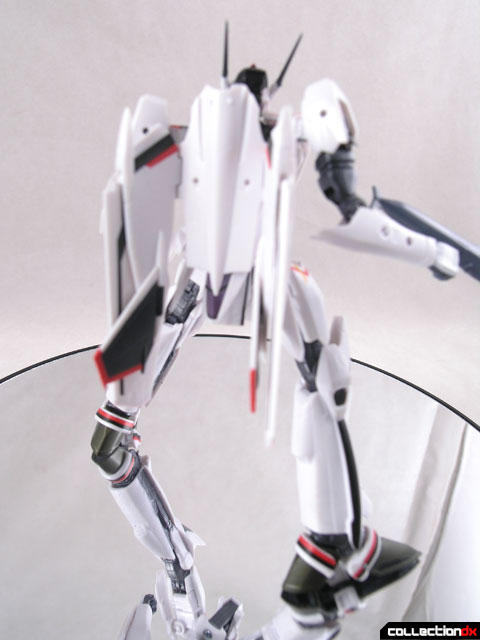 The figure is sturdy, with Bandai cleverly engineering all the main joints to pop out if handled too roughly. They pop back in with ease, and give you less fear when playing with it. Let’s eliminate the remorse of breaking a new toy!

All of the armor snaps on with ease. 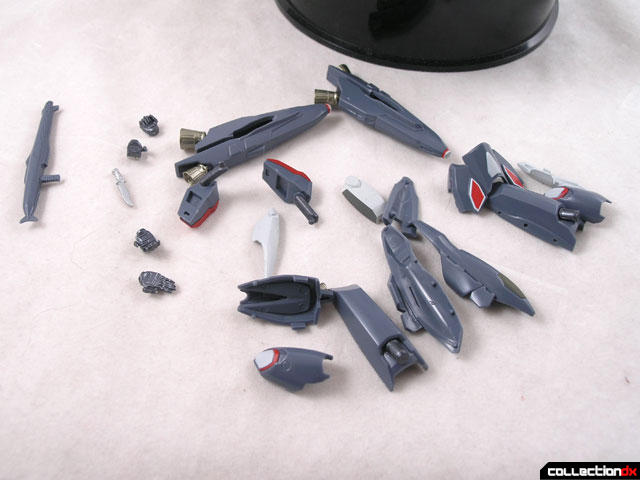 Well, mostly with ease. The chest, crotch, leg, shield and tail section snap right on easily. The hip armor goes on fine, but never clips in, so they can come off if you bump it into another part. The skirt armor is a bit of a pain – I found it easier to remove the parts, apply the armor, and then pop them right back into the ball socket. 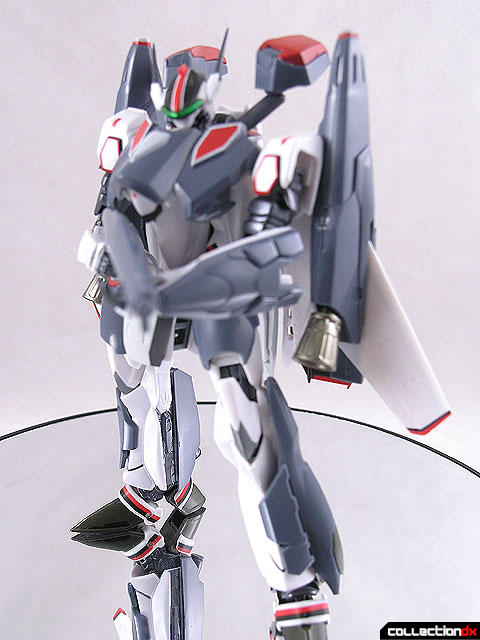 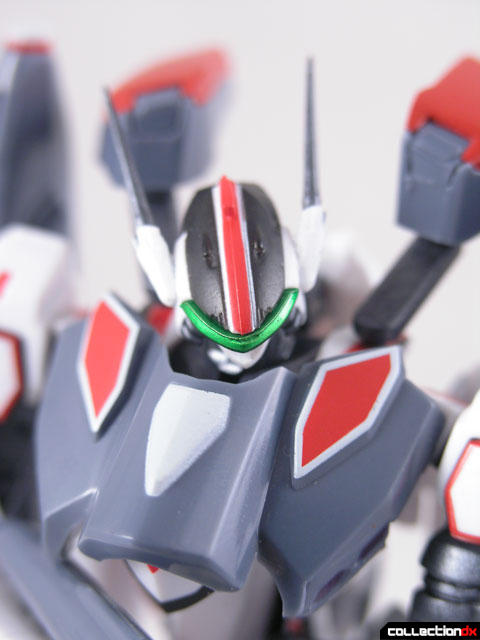 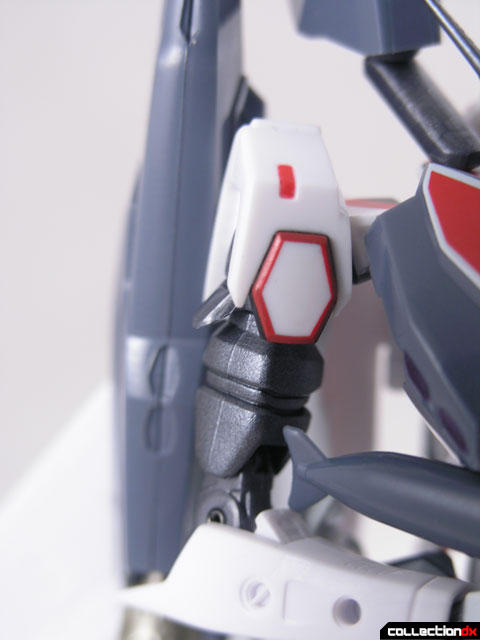 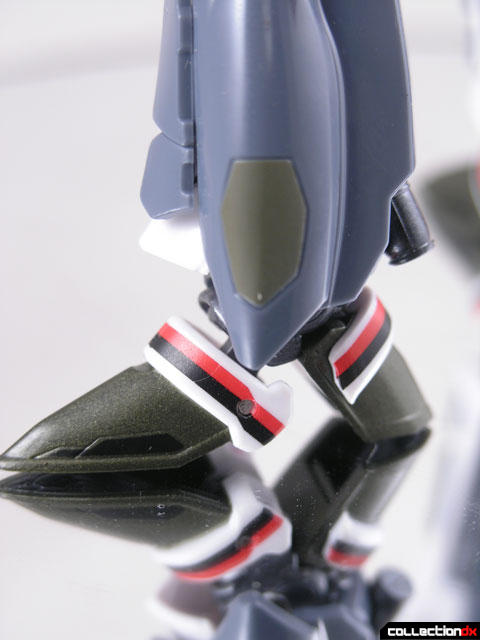 The two large thrusters on the back slip over the tail section. Each thruster has movable nozzles. 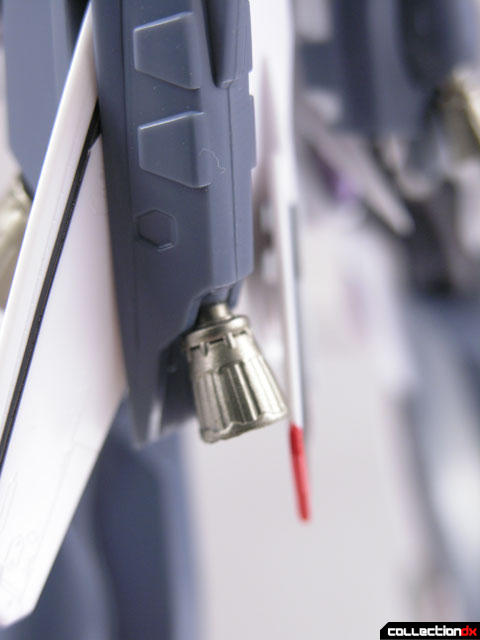 The whole back assembly is another part that can be removed, rather than broken, so don’t freak out if it comes off when applying the armor. It’s designed to. 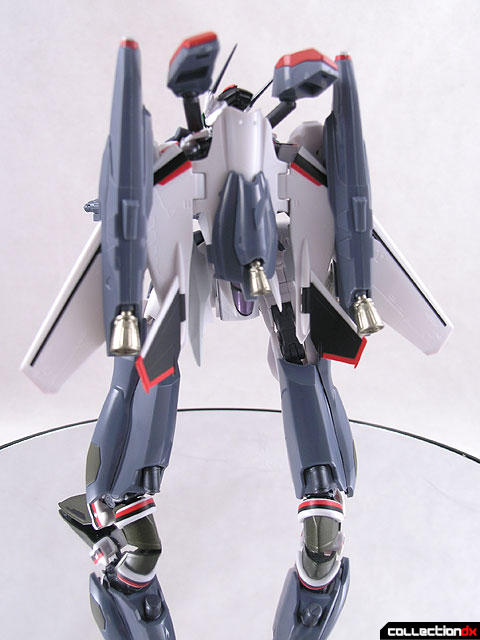 Each shoulder features a missile pod, attached to the body by a connector bar. The covers on the missile pods open, but they are difficult. 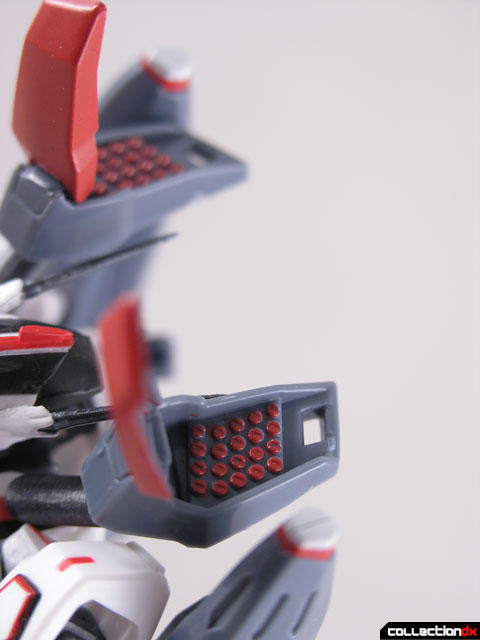 Besides the armor, other accessories include a gun, knife, and assorted variant hands.

The figure can be perched precariously on top of a Tamashii stand, but one is not included. 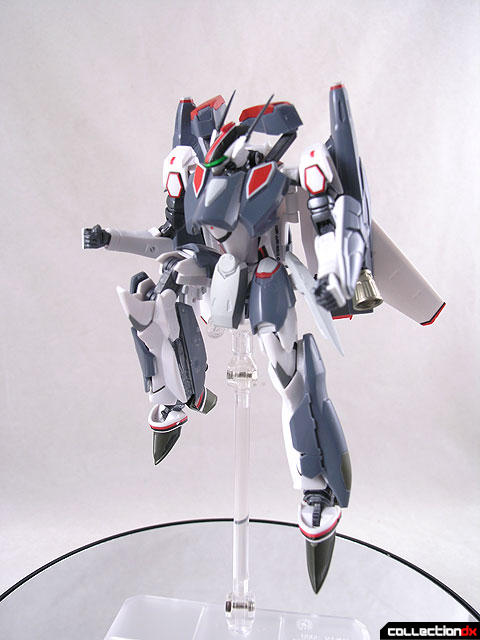 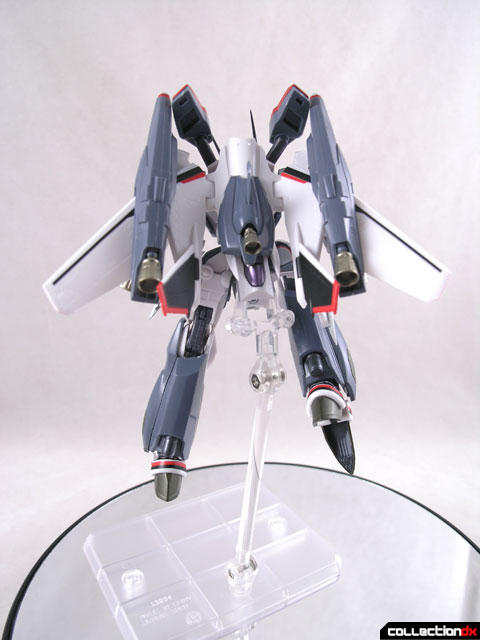 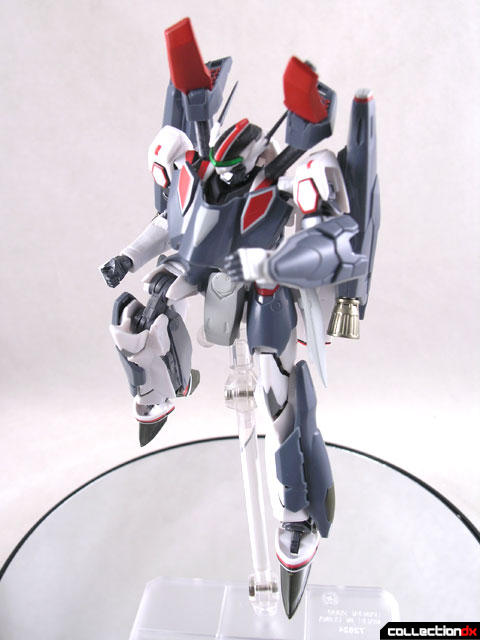 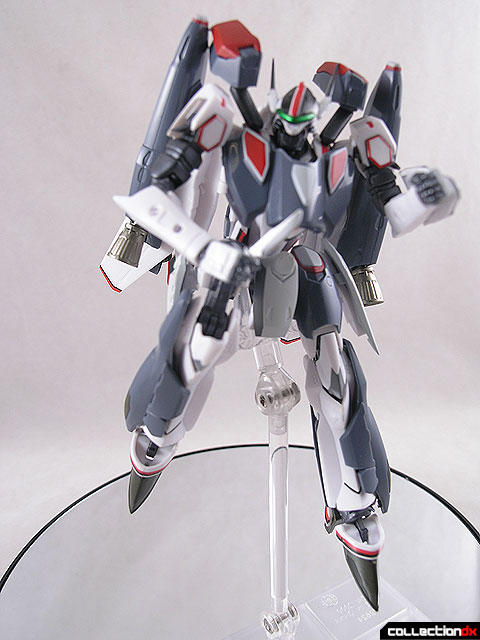 Overall, I was really happy with this release. It feels well thought out and intentional, like Bandai learned a lesson. It's fun to handle and pose, and it holds up to repeated play. 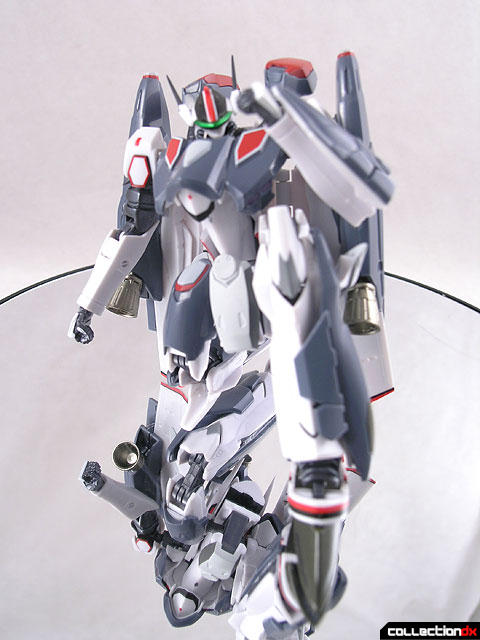 4 comments posted
That looks great. Been

That looks great. Been thinking about getting the Michael one. Was hoping they'd make a Luca one still. At that scale, it's better it doesn't transform.

There's something about it that makes it look best from the back.

"It feels well thought out and intentional, like Bandai learned a lesson."

Ah ha ha! Excellent. Because how often do we see toys where it feels like the designer thought of an engineering technique too late to implement it properly?

"Ah ha ha! Excellent. Because how often do we see toys where it feels like the designer thought of an engineering technique too late to implement it properly?"

Way too often I'm afraid. It's been a common trial and error with toy companies for many, many years, & Bandai's not the sole guilty party here. We've seen it happened with Hasbro, Mattel, Toynami, Yamato, Toy Biz, Kaiyodo, TakaraTomy, HWT & other bootleg corps. the list goes on & on. It's no suprise that they've all made mishaps for their lack of quality care & precision, but you have to give them credit for remaking improvements of their products that came out as faulty as lemon sports cars.