Machine Man is one of the lesser known creations of the legendary Jack Kirby, who has nevertheless become a cult favorite. His origin is fairly straightforward: a scientist named Abel Stack is working on the military's top secret android soldier project when he decides the best way to create a machine with the mind of a man is to raise it like a son. Stack gives the last prototype (X-51) a new life at the cost of his own. Now on the run from the government, Aaron Stack, the Living Robot, fights to survive, protect his friends, and find his place in the world.

Or at least that's how it all started...

I first encountered the character in the excellent mini-series, Machine Man 2020, which starred the titular robot in a classic revenge story. Aaron is reassembled in the future year of 2020 (ahem) by a group of rebels to find that the technology used to create him has been proliferated to make combat machines to line the pockets of the ruthless businesswoman, Sunset Bane. It's a cool little piece that even pits Machine Man against against Arno Stark, the Iron Man of the year 2020.

As I am more a casual comic book reader, I never really pursued more stories about the character until a friend of mine tuned me into Nextwave: Agents of H.A.T.E.. Warren Ellis and Stuart Immonen reintroduced Machine Man and a bunch of other misfits as a ragtag group of superheroes looking to do the right thing... eventually. In the series, Aaron Stack returns from his sojourn with the Celestials as a sardonic, egotistical jerk who reprogrammed his robot brain to love beer. 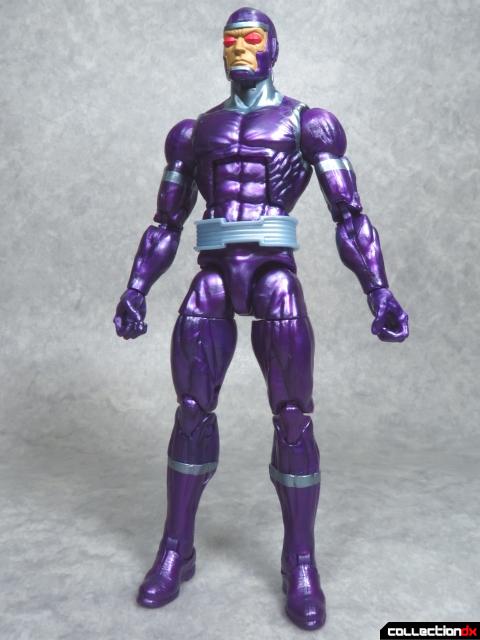 So with all that in mind, I present the Marvel Legends Machine Man. Hasbro has been giving a lot of lesser known heroes a shot at a six-inch action figure, and I was delighted to see that good ol' Aaron worked his way into the 2015 wave of "Avenging Allies." The toy itself is a slight reworking of the Bucky Captain America, and is a good representation of the Living Robot's classic design. 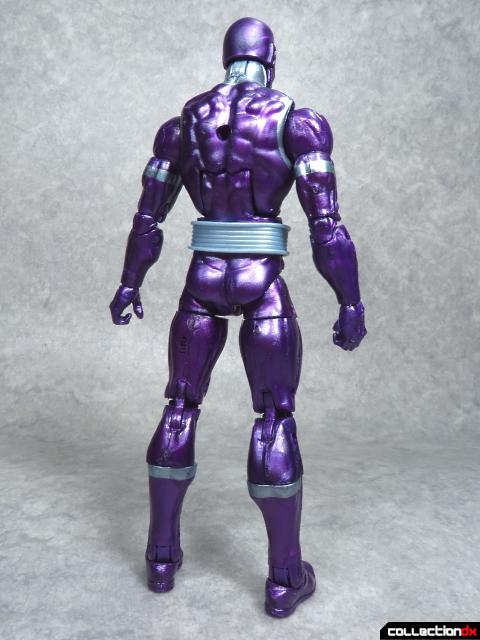 Since Machine Man is from the Jack Kirby school of superheroes, all Hasbro really needed was a new head and a belt to stay true to the character. He is made out of the mostly hard (but slightly rubbery) PVC plastic that is common to most American toys these days, and feels like a quality toy in my hands. This is actually my first Marvel Legends figure, and, as someone used to reviewing Revoltechs and S.H. Figuarts, I have to say this is pretty good for a US mass-retail toy. 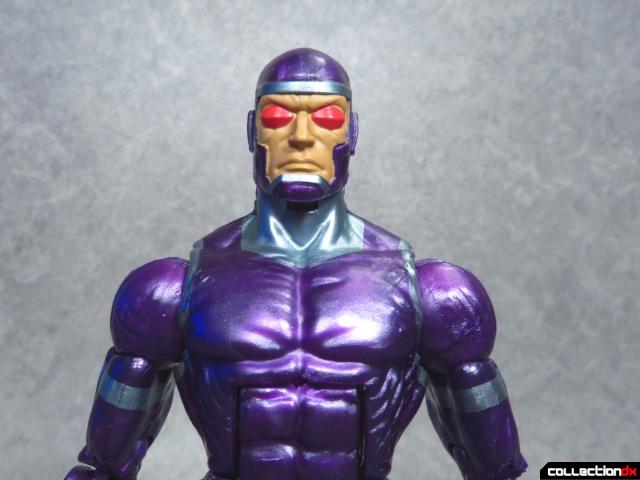 The figure's most prominent bit of new sculpting is a faithful rendition of Aaron's vaguely Sentinel-esque helmet with a frowny face and inhuman eyes. While his expression is simply stern, I still find the toy full of character.

That said, I do wish the figure came with an alternate Nextwave style noggin where Machine Man had a more regular human looking head (save for his trademark eyes) that you could swap in. Then again, there were some other differences to his outfit like black detailing instead of silver and a separate brown jacket so maybe it's better this toy stick to nailing one look than trying to be two. 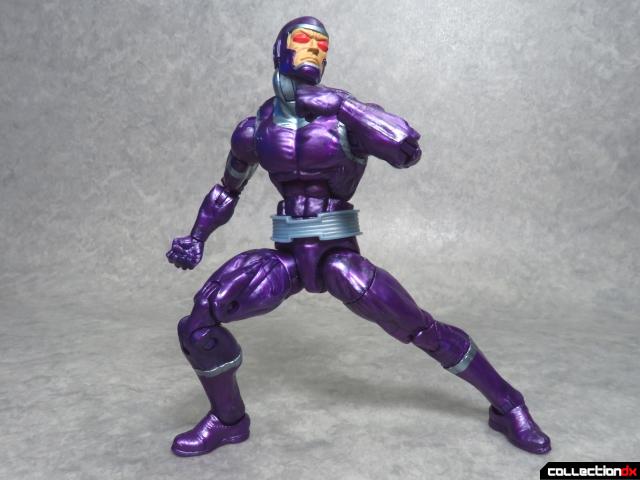 Being essentially a man in a purple onesie, Machine Man can almost take full advantage of what Hasbro's six-inch figures have to offer in terms of articulation. Most of his joints move with some soft ratcheting so he handles like a standard toy. Machine Man's articulation consists of:

- Double jointed elbows and knees.
- Rotating wrists with a hinge for up and down motion.
- Bicep, thigh, and calf swivels.
- Movable ankles that move forward and back, as well as tilting side to side.
- A rotating waist joint.
- An ab crunch joint.
- A ball-jointed neck attached to a tilting base. 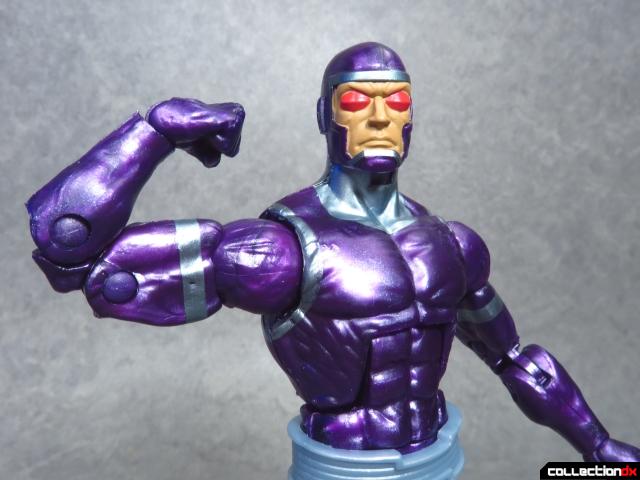 "Look here and be amazed at my mighty mecha-muscles, fleshy ones!"

Aaron has a complete package in terms of poses, and can look appropriately heroic as he is being his usual charming self. Note that the toy comes with a pair of open hands and fists that peg into his wrists. 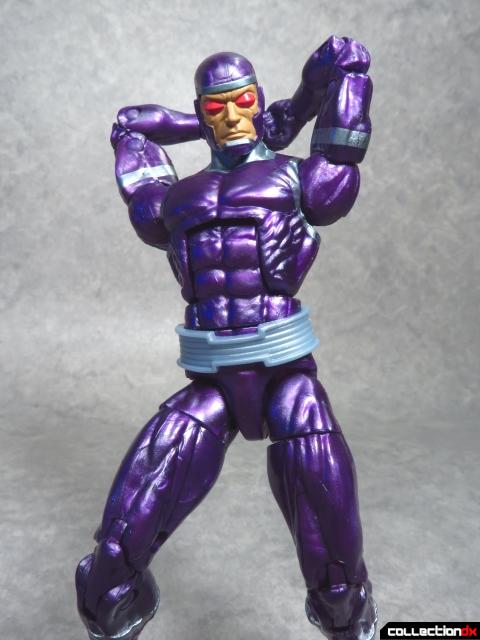 He can tilt his upper body forward and back one click each thanks to his chest joint. 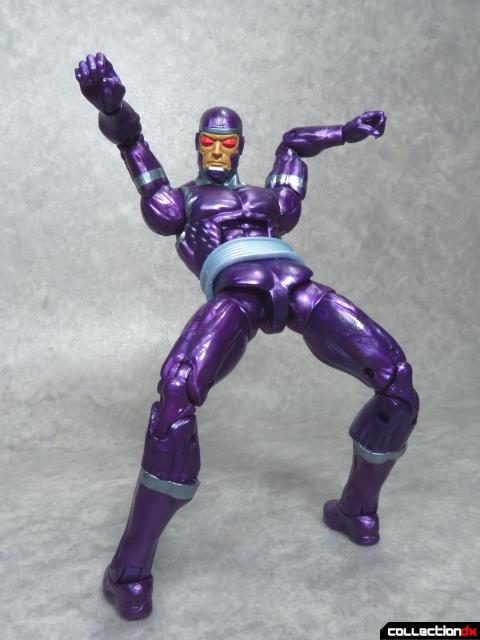 "I was built to have superior limbo skills when compared to humans and their rigid skeletons."

All those joints let Machine Man really get his robot on. He does a good job at standing up in weird poses too. 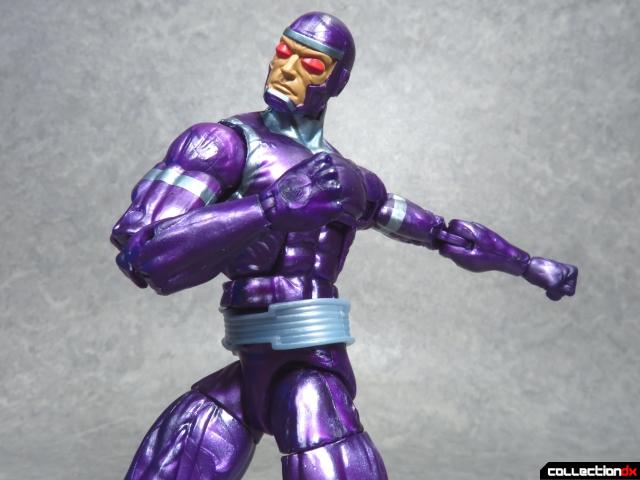 I mentioned before that Machine Man can almost take full advantage of his articulation. The one major malfunction is his '70s sci-fi belt that tends to bunch up around the waist swivel when you twist the toy's torso. Unfortunately, Aaron's ro-butt is too shapely to allow the belt to slide down enough and get out of the way. Just be aware that you may end up temporarily bending the belt when turning the waist. 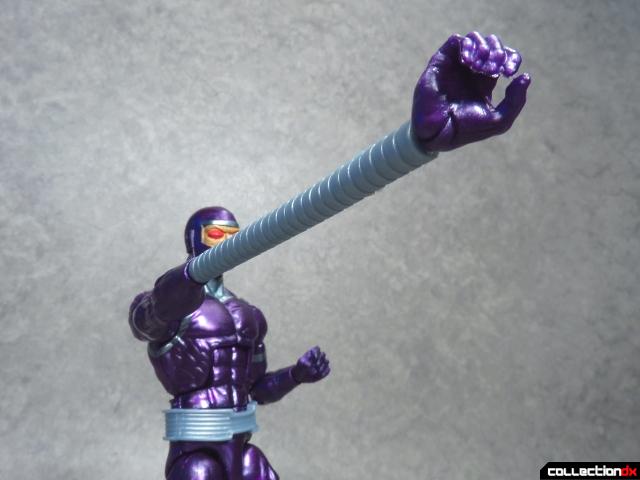 "Each of my limbs is a tool; a pre-programmed device that can be sent out to perform various tasks, such as stealing your stuff."

Machine Man comes with a pair of telescoping extensions that can be used with any of his hands. 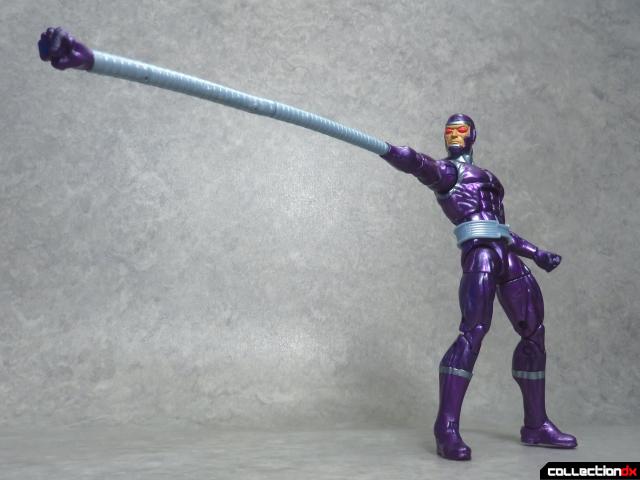 They can also be combined to form a really long extend-o-punch. Also, the extensions are made of flexible plastic and have a wire inside for bending. However, trying to contort the parts just doesn't feel right when I attempt it, and I would much rather preserve the look of straight shooting robo-fists.

And sadly, Hasbro did not re-engineer the toy to have extending lower legs like in the comic. I'm sure that gimmick would not really work on a toy like this but a boy can dream... 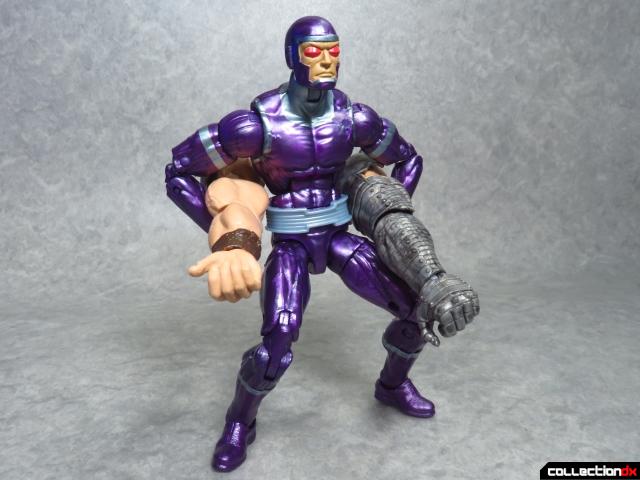 "Hmmph! Fleshy ones are always leaving their body parts just laying around."

Machine Man also comes with a pair of arms for the Allfather Build-A-Figure that lets you assemble the Asgard ruler, Odin. They sure are some beefy arms, but I have no use for them other than trade fodder with friends. 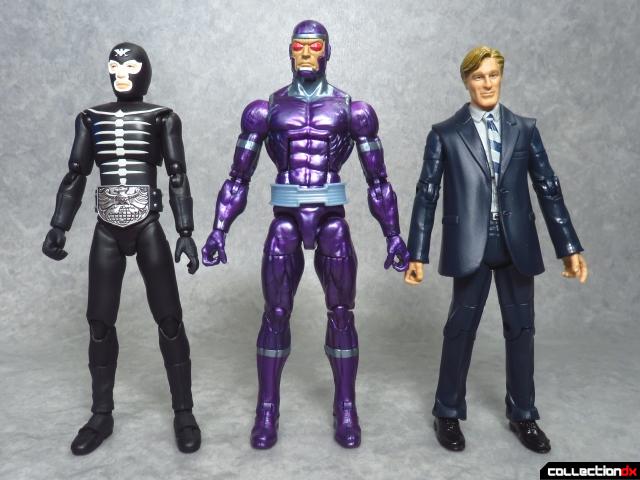 He sizes up pretty well alongside other ~1/12 scale toys from other companies like the S.H. Figuarts Shocker Combatman and Harvey Dent from The Dark Knight. 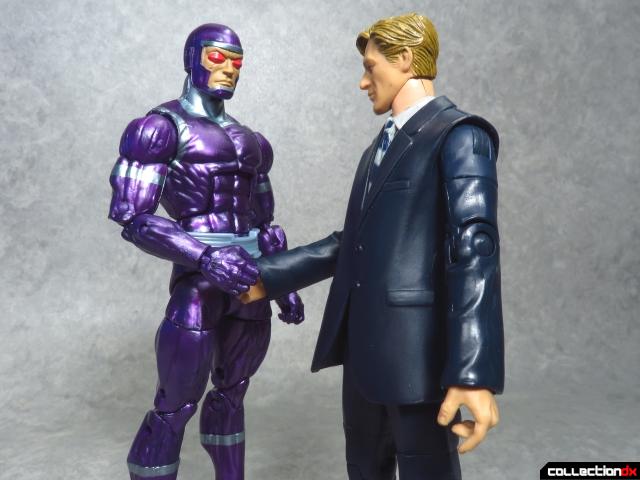 "Stack. Aaron Stack. I work as a investigator for Delmar Insurance."

Thrill at the epic crossover of when Aaron met Aaron! 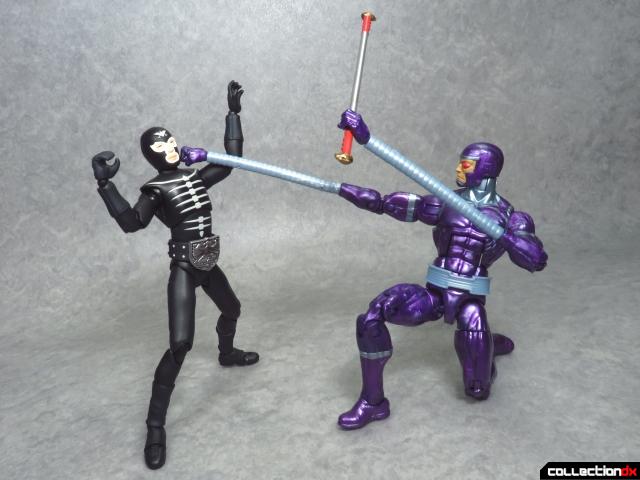 "What kind of weird fleshy one are you? Do you seriously expect to wreck my sexy robot body with a stick? Go back to hitting buggy cyborgs with your face, human."

Lately, Machine Man has been looking for work in other franchises. 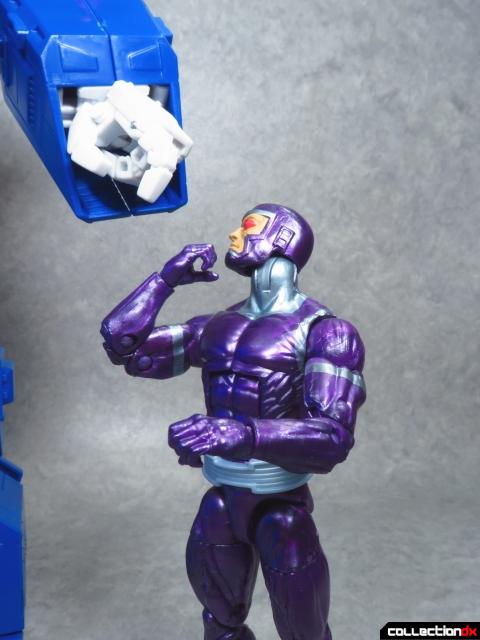 "I'm sorry Mr. Stack, but there is no way we're letting a total ☠☠☠☠ robot like you join the Autobots!" 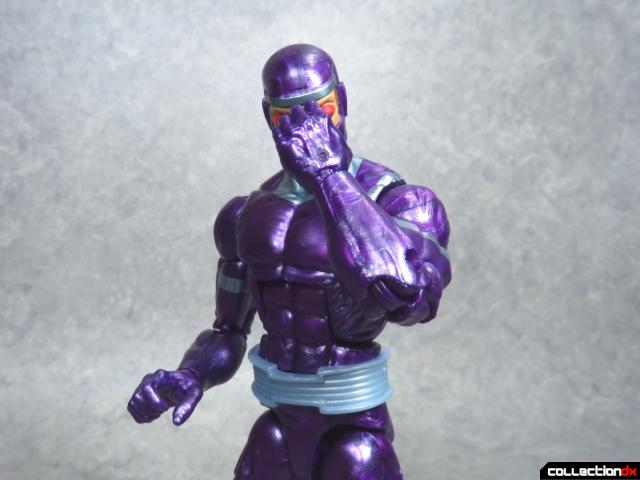 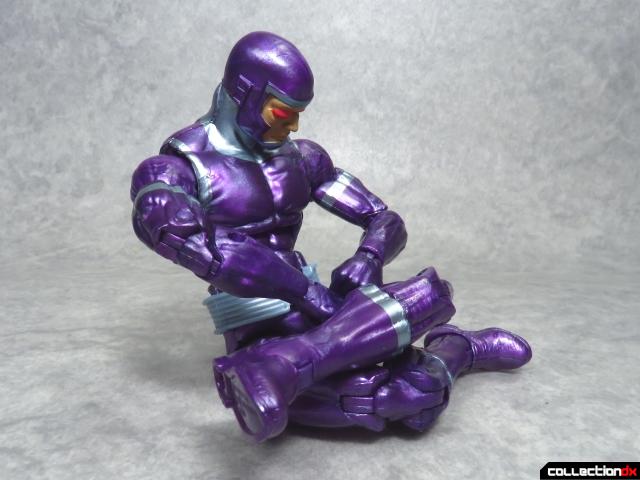 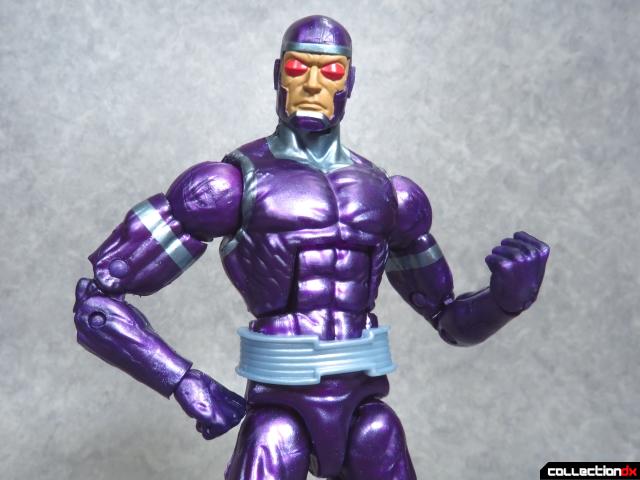 Overall, the Marvel Legends Machine Man is a "what you see is what you get" kind of toy. I wanted a good six-inch action figure of one of my favorite comic book characters, and Hasbro delivered in a decidedly no-frills package. No, he's not as well built as a Figuarts, smooth like a figma, or ambitiously articulated like a Revoltech, but he does the job and makes for a fun toy for about twenty dollars at a Toys 'R' Us.

3 comments posted
I see what you did there.

Hopefully they release a Captain Marvel/Photon/Pulsar/Monica Rambeau figure to team Aaron with. The ability to head swap could recreate one of the more hilariously twisted scenes the modern depraved Machine Man ever set foot into. Especially if you add in the new Spider a Girl fig.

Monica used to lead the Avengers, ya know!