Incom Corporation's T-65 X-wing Space Superiority Starfighter was made famous by pilot, Luke Skywalker during the Battle of Yavin. Luke bravely piloted the X-wing into the Death Star's trench while being pursued by Darth Vader's Advanced X1 TIE fighter and two regular TIE fighters. Luke was able to make the direct hit to the Death Star's vulnerable exhaust port without using the X-wing's advanced targeting computer, Luke trusted himself and used the force to deal the fatal blow.

Today I will be reviewing Hasbro's Star Wars The Empire Strikes Back 2002 release of the X-wing fighter. Hasbro's version of the X-wing is larger, greater detailed and more accurate to the movie than the original Kenner version.

Hasbro's has packaged this version in a window box. is it just me or do other people wish that Hasbro would just pick one style of packaging? Anyways, the box lets you get a good view of the detailed X-wing inside.

Removing the X-wing from the box and assembling the wings with outboard laser canons is a snap. Once assembled the ships plastic construction feels very sturdy and has good heft.

As you can see in the next few pictures, they kinda went a little overboard with the weathering detail. I don't remember the X-wing being that dirty looking...do you? Another pet peeve of mine about the X-wing's design and not this toy is that the rear landing gear...Just how does it retract to the same space as the lower engines? hhhmmm? 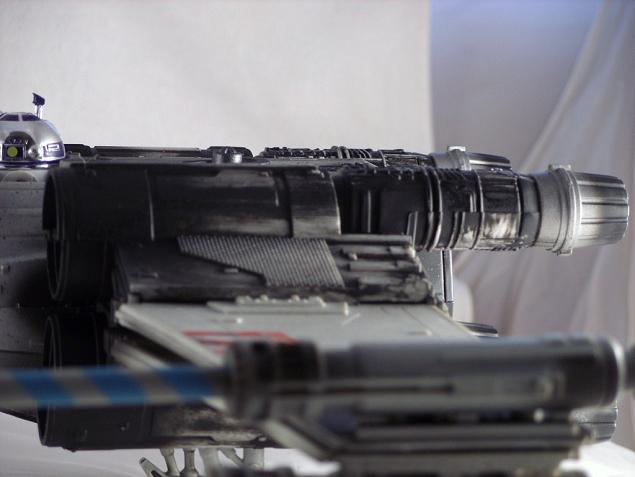 At the rear of the ship you will locate the lever that activates the wing opening feature that gives the X-wing its namesake. 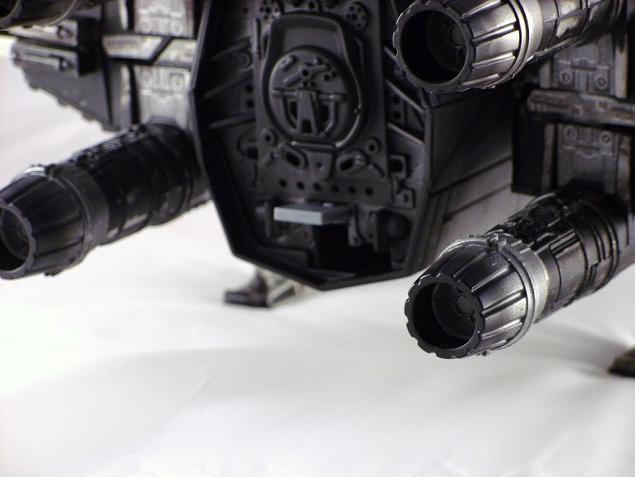 The next two photos show the nicely detailed X-wing cockpit 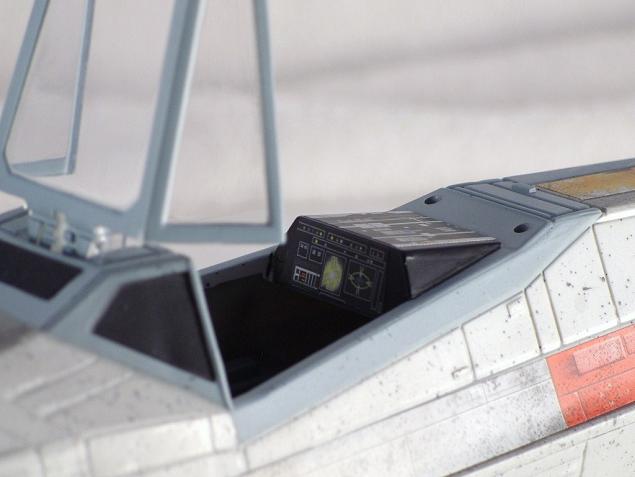 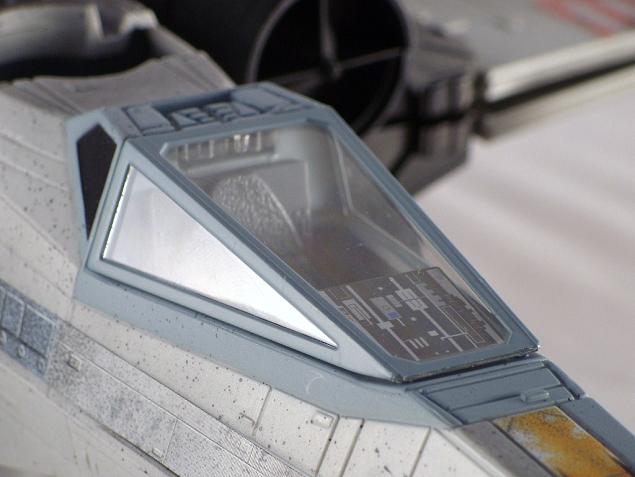 The last two photos show the astromech socket and the included R2-D2 riding in the socket. I'm not going to include a review on the R2 unit because its a very basic figure with no special features to speak of. 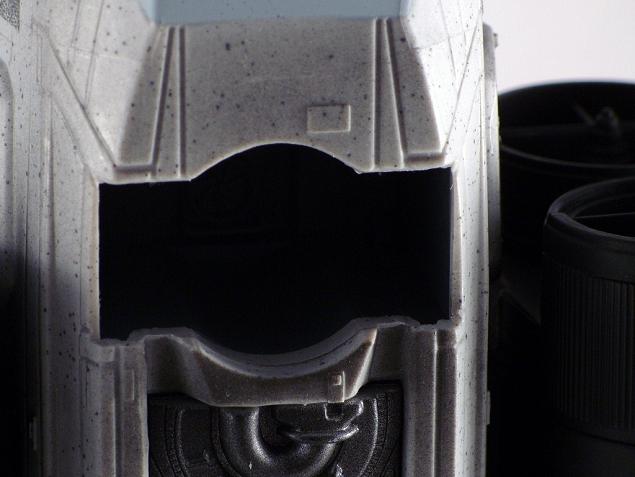 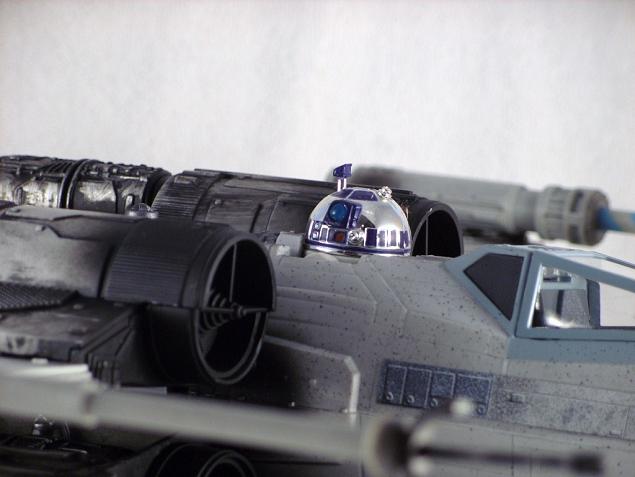 To conclude, I like this version of the X-wing and feel it is the best representation of this ship in toy form to date. My only gripe is the excessive weathering detail. It is just too overboard in my opinion. Less is more Hasbro.

the r2-d2 figure that comes with this ship is actually one of the better r2-d2's ever made by hasbro. And i'd have to agree, there is just way too much weathering on this set. It's still really fun though!

Regarding the weathering, this reminds me of Hasbro's release of the cartoon-accurate colorscheme MP Starscream. And just like with that toy, I'm confident a little 91% rubbing alcohol and a bunch of cotton swabs will clean that sucker RIGHT up!

This is a remold of the best X-wing toy ever - the Power of the Force Power FX X-Wing (Which I will review at some point). This toy loses the fancy electronics, including light and sound gimmicks, and removes the built in Luke Skywalker pilot.

This version I think is meant to replicate being dirty as hell from being pulled out of the swamps of Dagobah. notice in the packaging it's half submerged in water. For that, the weathering is great. Later on they reissued this again, only this time including plastic foliage to drape over the X-wing and also a swamp monster.

i'm very happy to see these reviews here. I've always viewed CDX as intelligent guys with senses of humor, reviewing the "best of the best" in the toy world.

It would be sweet to have a "best of star wars" series of reviews, as there's so much garbage out there, it'd be cool for parents and collectors alike, as there's 5,000 different Han Solos, it'd be nice to know which one is the one to get without pouring over 1,000 reviews from the hardcore SW guys out there.

I'd love to see more Sci-Fi reviews around here!

Thanks Big R for the compliment and comments about CollectionDX. Although I don't collect the new Star Wars toys it's great to see these reviews as well and to see what's available on the market.

Dan, One question about the X-Wing is this a brand new molding or based off the 1980's release?

Hi Leonardo,
Hasbro's version of the X-wing is larger, greater detailed and more accurate to the movie than the original 1980's Kenner version. just click on this link and you will see exactly what I mean.

I just couldn't remember but now I see it, wow what a better improvement over the kenner original, which looks so much smaller. It's just so hard to tell these days with so many reissues and Kenner reissuing the 80's toys in the 1990's.

A little rubbing alcohol and this (and that Starscream) could be very more cool looking.
I like that they removed the cockpit figure. Wasn't it annoying as a kid when the pilots to toys and models were just a head sticking up?

The dirty paintjob is allegedly for a "Dagobah" look, but I do wonder if it's to hide other things. I don't mind an accurately painted figure now and then, but I think they're subscribing to the 1990's McFarlane idea of "toys that look absolutely FILTHY are cool!" a bit too much. (Especially in Starscream's case... when did he ever have filthy, blackened afterburners?)

Gripes aside, it's still the best X-Wing toy I've seen.
I can't remember the last time I purchased a Star Wars toy of any sort, but I do like seeing in-depth reviews on them.