I really liked the Animated version of Lockdown, but I had no idea they made a version in the Movie line until I saw it on the shelves. I thought it was an interesting (and excellent) idea to take one of the great Animated designs and translate it’s aesthetic to the more detailed ROTF line. This bore further investigation. 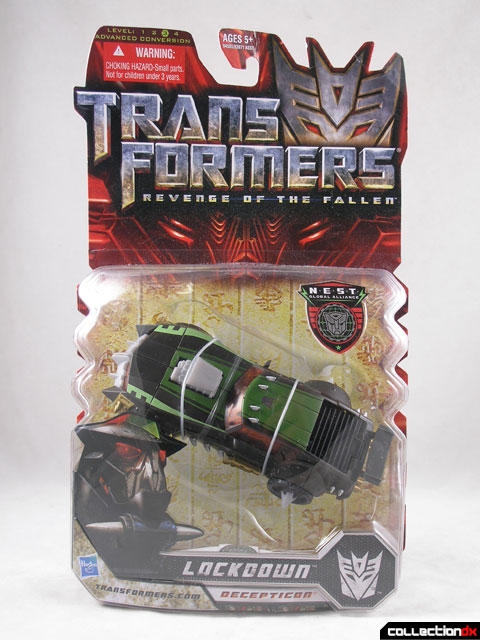 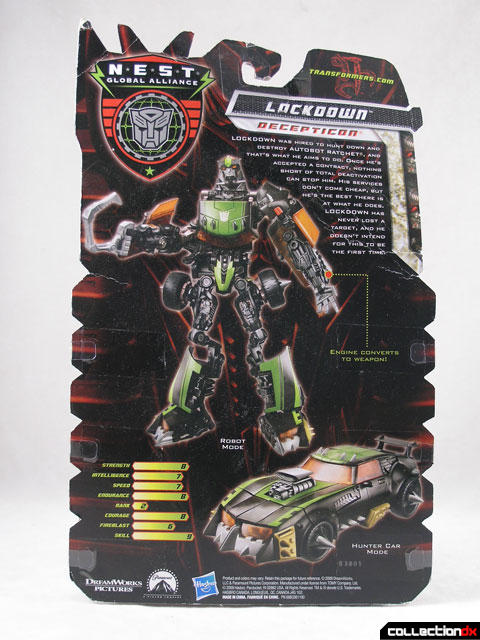 For starters, this new Lockdown is more angular and mechanical, and has a much more complicated transformation. It’s not quite “bayformers” but it’s a far cry from the smooth lines of animated. 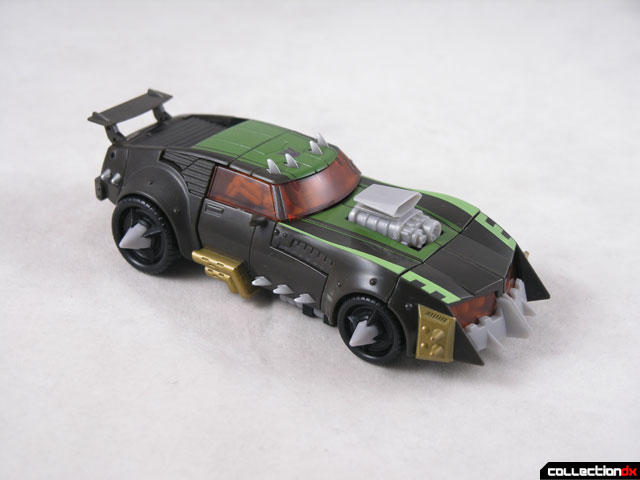 In vehicle mode, visual cues are the same. This is a mean muscle car with no excuses. It feels like something out of Death Race 2000. The wheels have giant spikes on them, there’s a cattle-pusher front grill and exhaust pipes emerge from the sides. I also really dig the orange translucent windows. 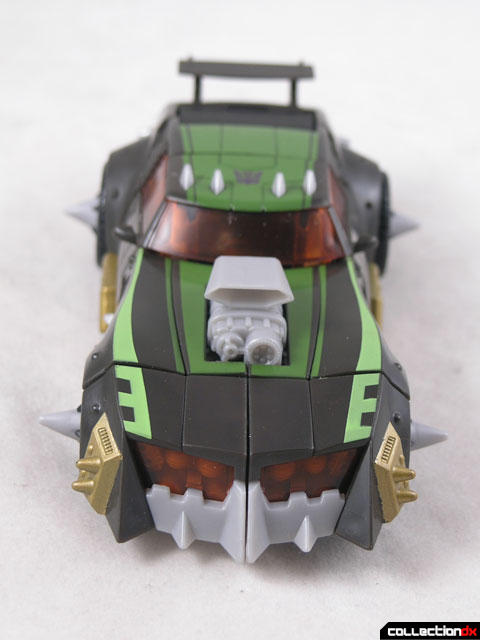 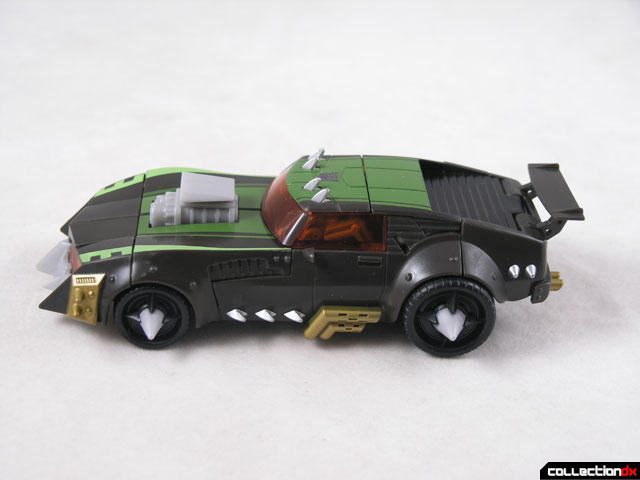 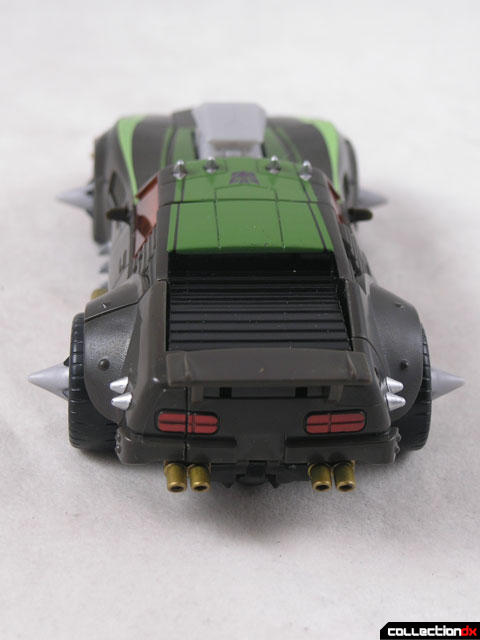 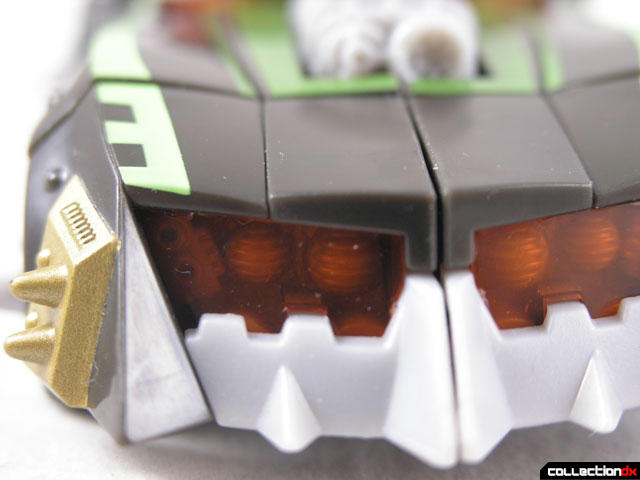 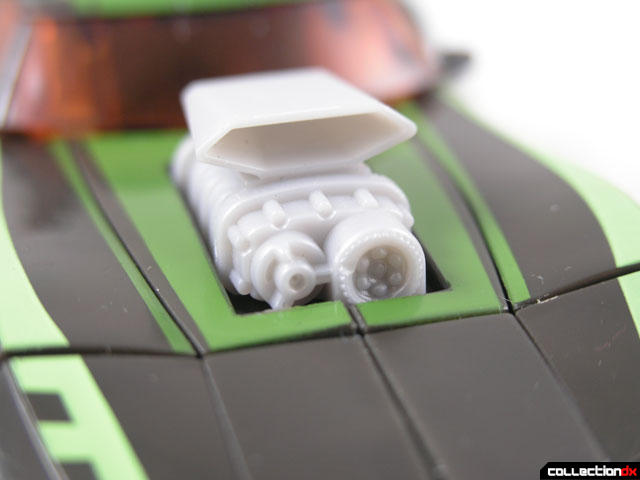 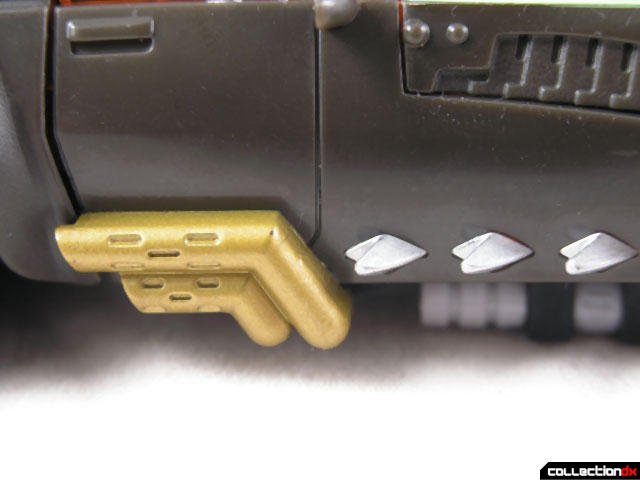 Transformation is radically different from its predecessor with intricate twists and turns.

When done, the bad-assery goes away a little bit, and it looks sort of like a old-man transformer. It’s yelling at other transformers to get off his lawn. 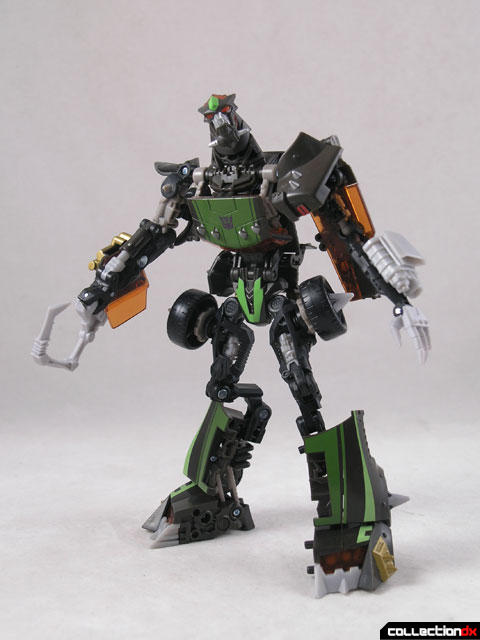 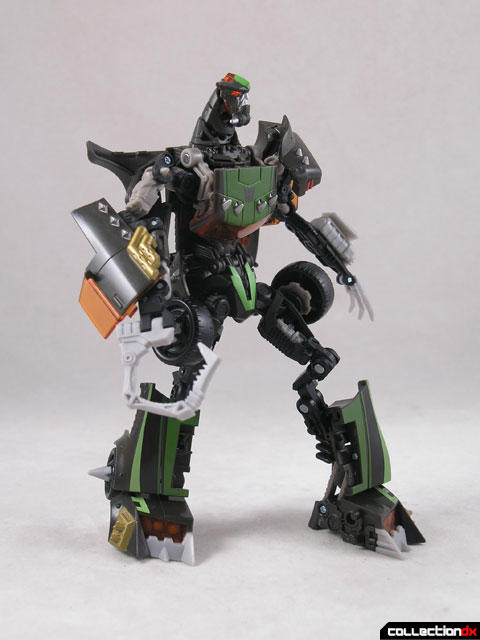 The multi-jointed head and neck allow for a fantastic range of motion, but the head seems too small. The furrowed brow and frown add to the look of age for the character. The light piping is nicely done though. 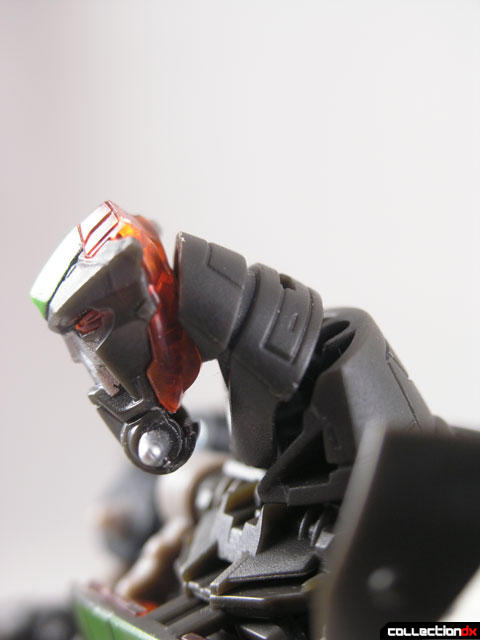 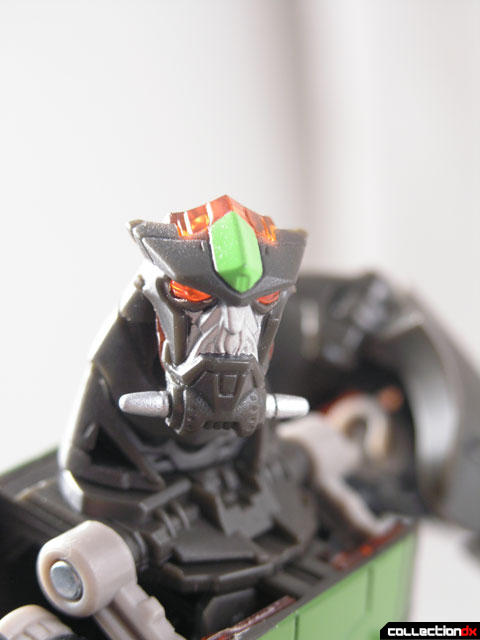 The arms are not symmetrical which is a big turn-off to me. The left arm features the engine on the forearm with a limp, flexible plastic hand at the end. It might be good for bitch-slapping, but otherwise, not so much. 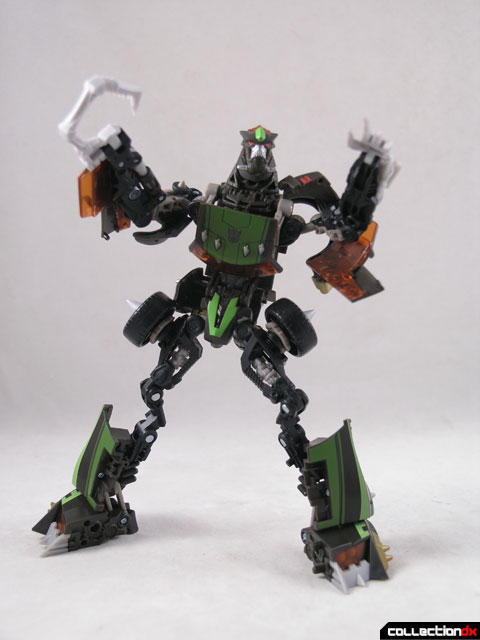 The other arm has a giant hook at the end, but again it’s made out of that floppy plastic. Unlike the animated version this is not removable – this is what he has for a hand. It's got a cool piston action though. 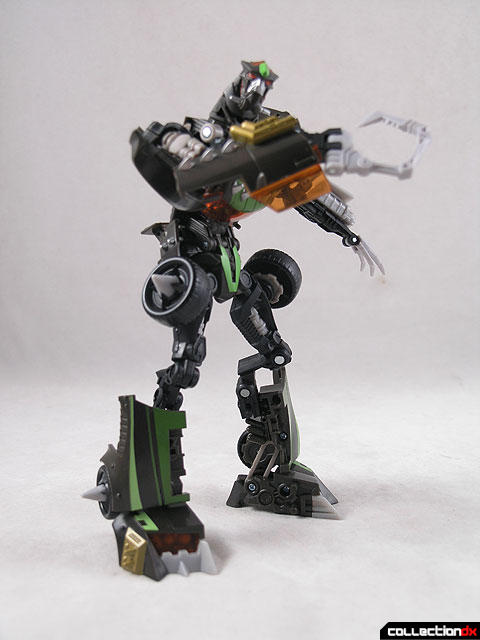 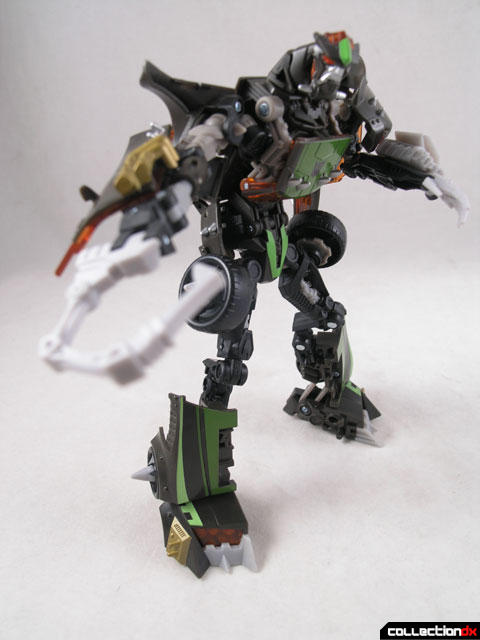 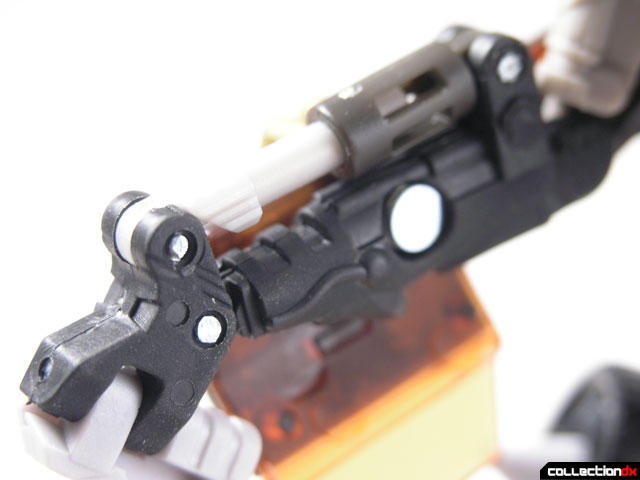 The legs are where it really goes wrong for me. Look at those tiny, multi segmented legs? They bend in places they don’t have to, giving him goat-legs or something. 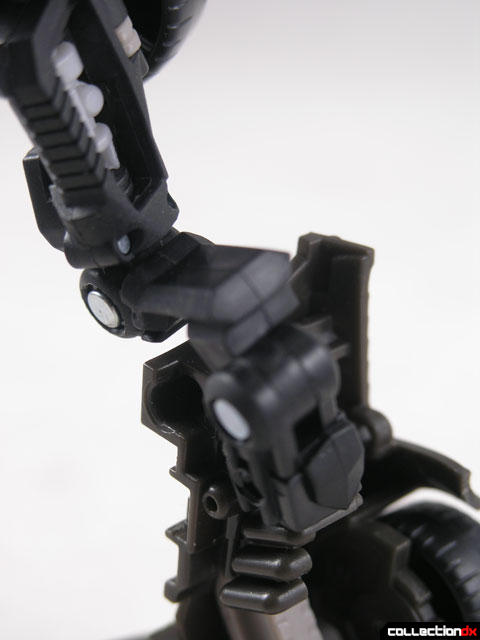 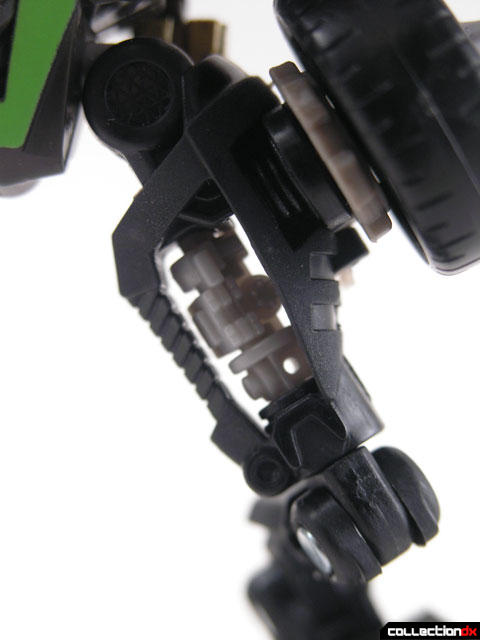 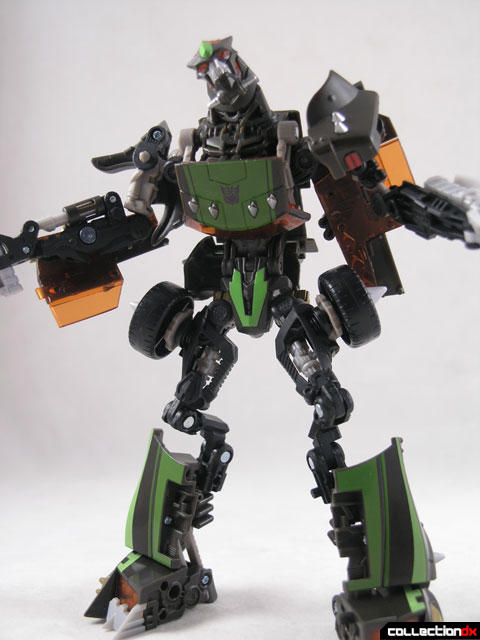 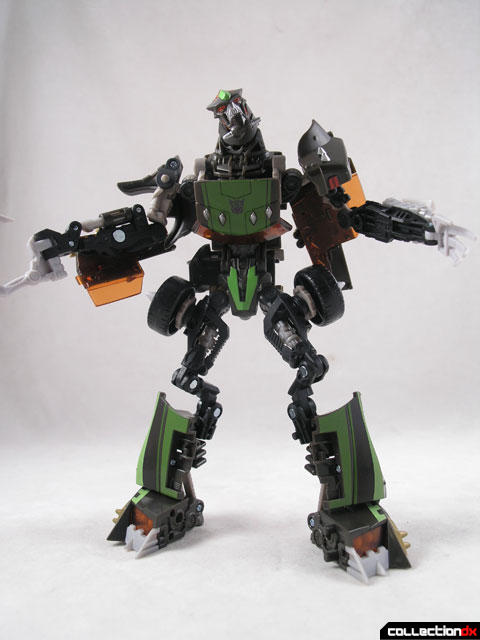 I like the idea of taking designs that originated in the Animated line, but I feel that they lost some of the coolness that made the Animated version great. This one is too spindly and aged looking for my tastes.

4 comments posted
Biggest turn-off for me was

Biggest turn-off for me was the multi-joint knees, which made no sense. As I said of the original, I liked the character, but I couldn't see myself getting any of the toys. (Too much bulk in the legs, not enough in the arms, maybe?)

I actually found this version of Lockdown to be quite a bit more appealing than the Animated version. Lockdown's character is supposed to be a bounty hunter who is constantly incorporating "trophies" from his enemies into his body, so that would lend his form to be a bit asymmetrical, in theory. I especially liked how TALL he is compared to other Deluxe-class Transformers. He towers over them! And with his head design, he has a kind of Frankenstein's Monster aesthetic to him. I love how menacing he looks!

Another plus is that if you have ROTF Deluxe Ratchet, you can use Ratchet's weapon with Lockdown, in the same manner as was used in Transformers: Animated. Ratchet's cannon can plug into Lockdown's arm at the same place as Lockdown's engine block weapon.

On the flipside, I did find the floppy plastic hands and hook to be a major disappointment, as well. I almost wish that there was a Japanese release of this figure, as it would most assuredly use a harder plastic for the hand and hook.

Me? I dig this design. The goat-legs are pretty neat looking to me and that head is pretty imposing. Definitely can see why it didn't work for you though.

Lockdown is one of my top favorite movie deluxe-class Decepticons. It's nice to have an evil car to bash with those ground-based Autobots.

Things I dislike: The shoulders pop off pretty easily, the hand and the hook do not swivel ((I hate how it's in most of the newer toys)), and the fact that they are made of soft rubber as if the makers thought the kids were too stupid and they'd poke their eyes out with it.