Today I will be reviewing the Leon Kaiser DX re-issue, made by Sonokong/Takara. The sample for today's review was provided graciously by our friend Jeff Stein over at High End Transformers. Please check them out or just click on the Ebay links at the bottom of the page for a direct link to the item reviewed today.

Leon Kaiser is the support mecha character from the anime "The Brave of Gold Goldran" He is essentially a 3 mode robot. First mode being a giant combined robot "Leon Kaiser", The second is a giant mecha lion "Kaiser" and a smaller jet that can transform into a robot "Leon". Leon Kaiser is capable of combining with Goldran and Sorakage to make the ultimate form called Great Goldran.

The video Below shows Leon and Kaiser combining to make "Leon Kaiser". 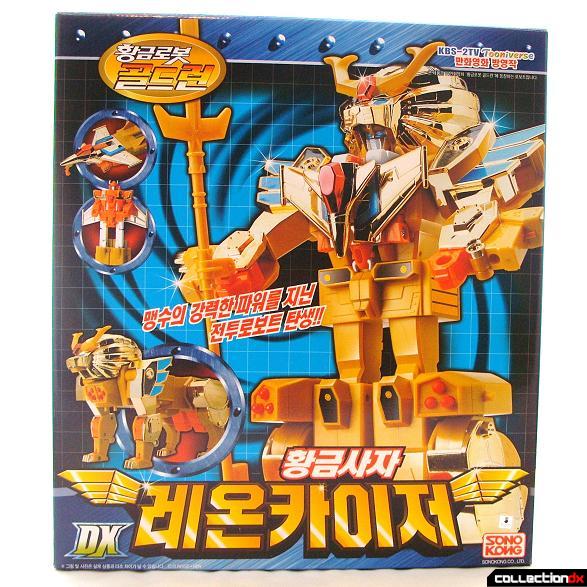 I am going start off with Leon Kaiser combined mode first to mix things up a bit. 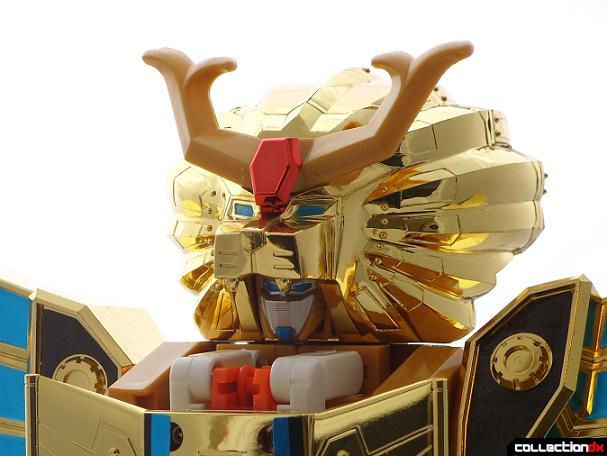 Leon Kaiser in his combined mode weighs in at 1.7 lbs, and stands approximately 11 inches tall. Leon Kaiser is made from a nice combination of very solid feeling, quality plastics. As you can clearly see below, some of the plastic is gold chrome plated and some is just matte gold color with orange accents. In my opinion the color combination looks very good together and does not look overly plated like Goldran. The articulation of Leon Kaiser is very limited. When I say limited I mean the shoulders only. 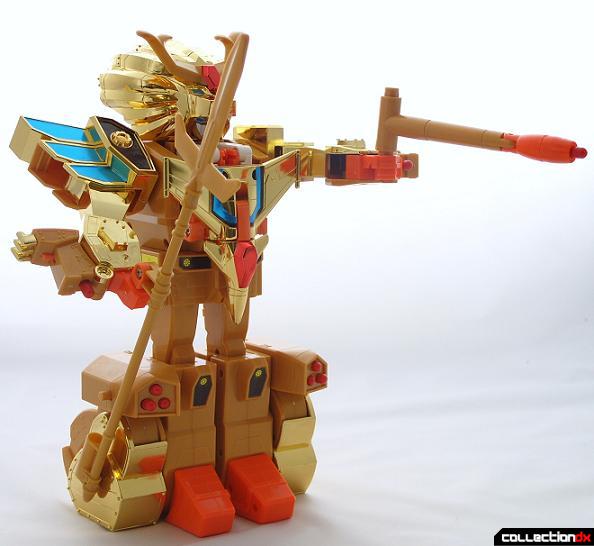 In the above photo you can see Leon Kaiser's 2 weapons, One being a bladed staff and the other is a gun that is actually the tail of Kaiser in his Lion mode. The tail can fire one of the 48 included red missiles.

Taking a look at the backside of Leon Kaiser you will notice that he is rather plain, other than the spiked gold plated piece that almost give the appearance of a tail. Those pieces will come into play in the future review of Great Goldran. 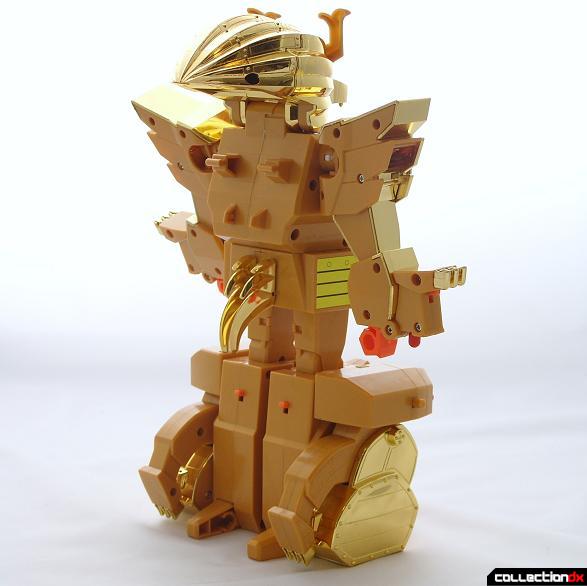 Turning him around to his front you will notice that Leon Kaiser has a very stocky build giving him a very large juggernaut look. 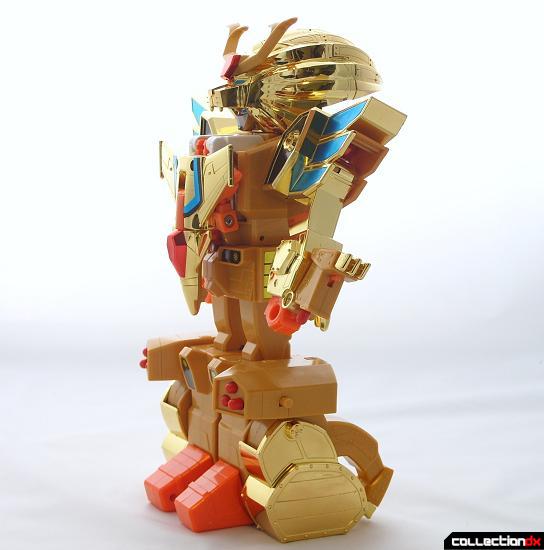 Not only is Leon Kaiser a very large and imposing figure but, like most of the figures so far from Brave Goldran, he is armed with plenty of missile firing goodness! He is capable of firing missiles from both wrists as well as from the missile clusters on each leg. Don't you just love toys that can take an eye out? 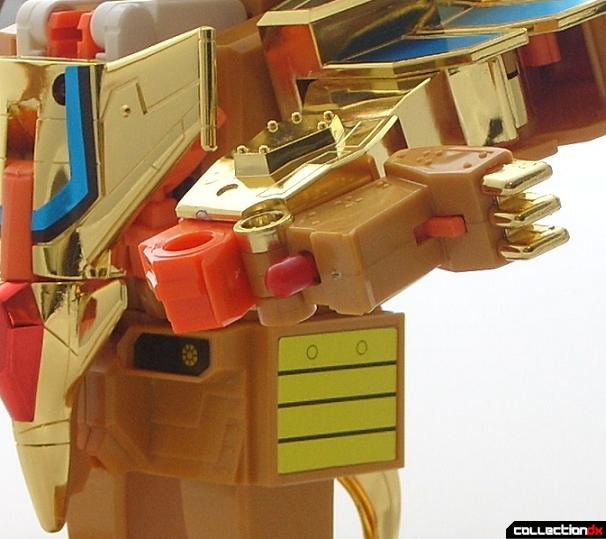 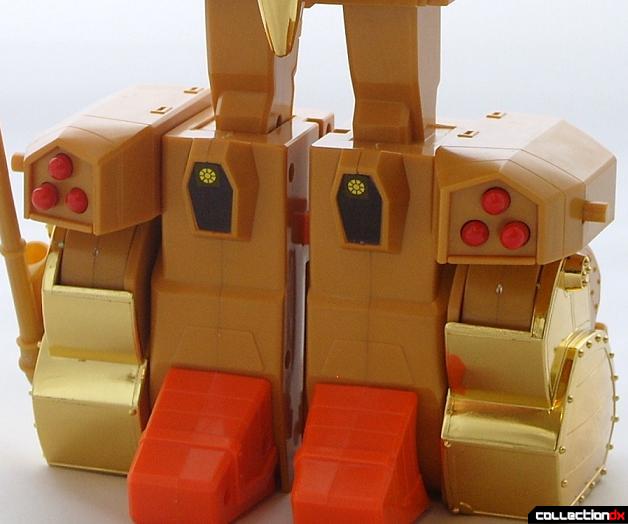 As if Leon Kaiser's 8 missile launchers weren't enough....You can always attach Sorakage to his back, allowing him flight capabilities and another 10 missiles to his already formidable arsenal!

Now lets break Leon Kaiser down to his two other modes. Starting off with Leon, shown below. 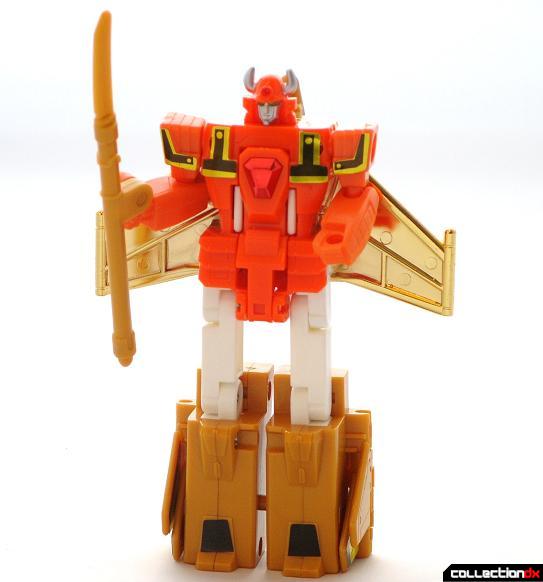 Leon stands approximately five inches tall in robot mode and has articulation in his knees, thighs, elbows, shoulders, and his head even swivels. I must say that that is not to bad for a Brave Series figure.

Leon is made from solid plastic that has the gold plating with the matte gold and orange finish like Leon Kaiser above. Leon includes a bladed staff that is also very much like a scaled down version of Leon Kaiser's above. 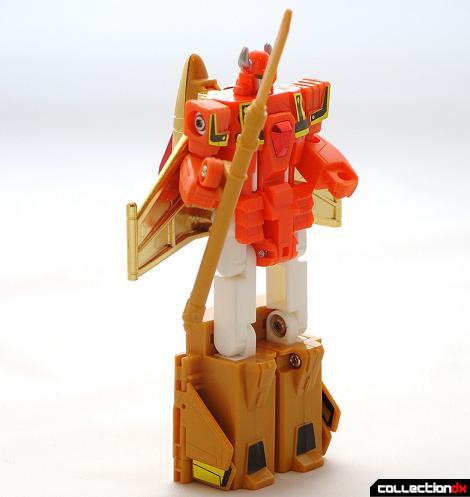 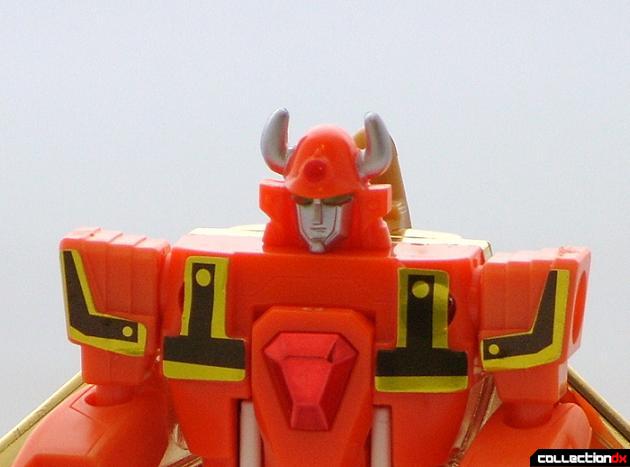 Leon's alternate mode is this very odd proportioned jet you see below. The jet has a red jewel shaped cockpit and has retractable front landing gear. All in all it is a very boring mode and could have probably been executed better. 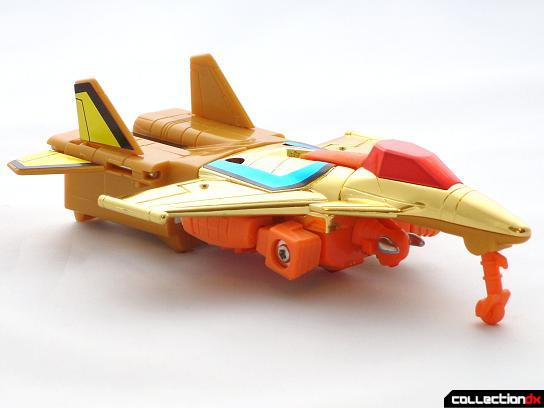 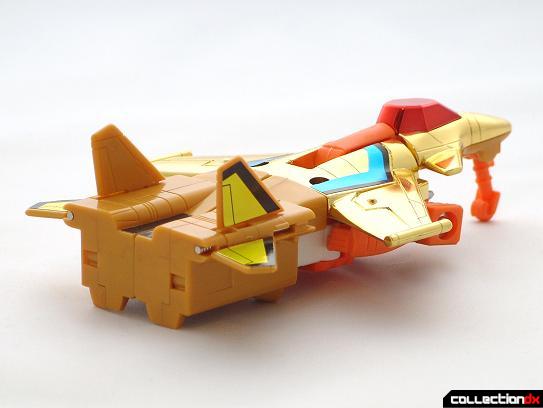 Lastly we come to Kaiser, the Lion component of Leon Kaiser. As you can see, Kaiser is significantly larger than Leon. 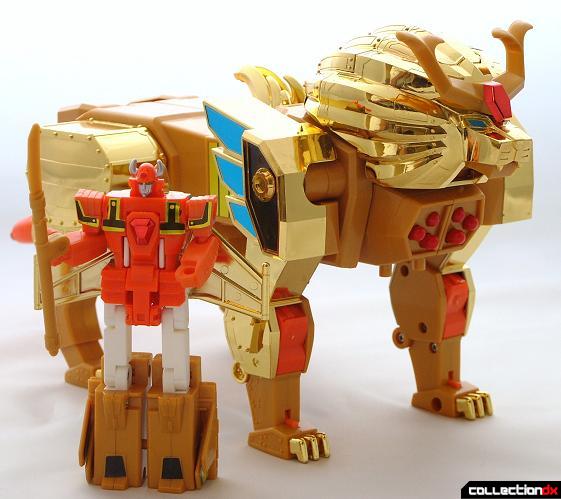 Kaiser has some rather odd proportions like Leon. I can get past this because he still looks relatively fearsome with him chest mounted firing missile gimmick. 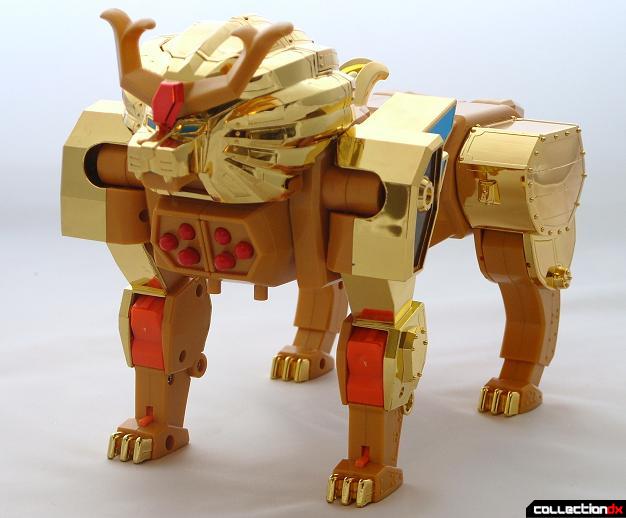 Kaiser's articulation, Like Leon Kaiser, is again very limited. The articulation is found in his shoulders and hips only, thus making him virtually a static posed figure because of the lack of knee joints. Let's face it, lifting a leg straight, just looks odd. 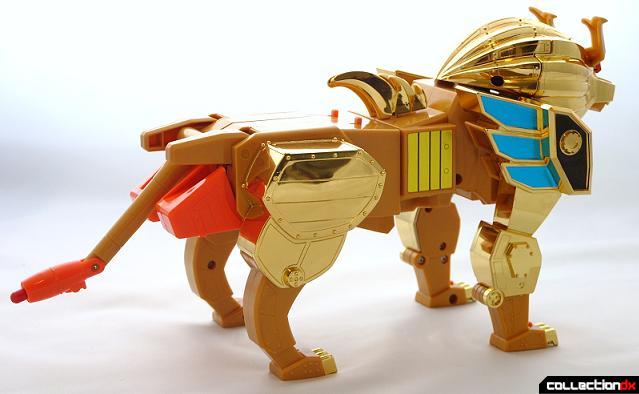 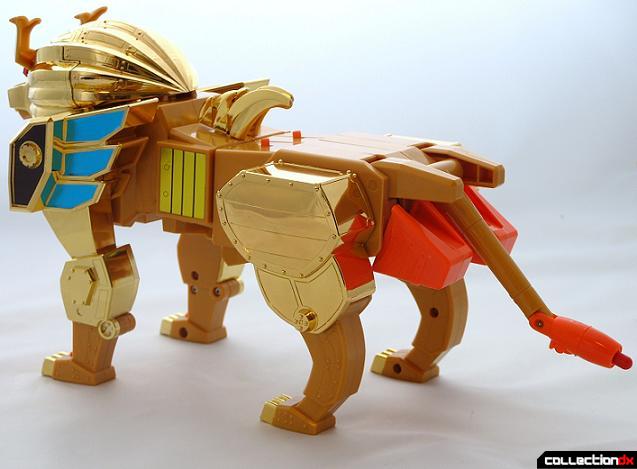 In conclusion, I do have some design issues with Leon Kaiser's alternate modes. However, I feel that he is a worthwhile purchase and would definitely recommend him to anyone who has Sorakage and Goldran for the simple fact that he is necessary to make the Great Goldran.

4 comments posted
I know the toy has a lot of

I know the toy has a lot of faults, but there's still something about it I really dig. I remember seeing dead stock of these for sale from Taiwanese sellers back around 1999 ~ 2000 and being amazed by how cool it looked in its Japanese packaging. The robot mode is just neat looking to me. The head in particular is really over-the-top with its giant mechanical mane.

I think the use of ball joints in Leon's elbows is pretty interesting. This toy originally came out in 1995, around the same time Transformers G2 was making use of the same joints. And yet somehow it seems out of place being used only at the elbows, compared to the Cyberjets, which had it everywhere.(Advenger from Goldran too shares a TFG2 feature: spinning/launching rotors, just like the Rotor Force.)

Goldran was really big on missles, wasn't it...? O-o

Y'know, I really gotta say that I don't find fault with this toy's...faults! The combined robot is absolutely gorgeous and it has tons of play value. His halberd is one of the best weapons for such a robot toy. Everything about it is just classic!

Cool review man. I love the Golden Braves. Especially when they are all combined. IIRC they have 29 missiles littered all over there bodie in Great Goldran form. This is just over the top Super Robot goodness.