Power Rangers Super Megaforce is the newest iteration of the long-running Power Rangers franchise. It is a continuation of Power Rangers Megaforce, and utilizes footage from one of my all-time favorite Super Sentai series', Kaizoku Sentai Gokaiger.

The Legendary Megazord is the newest Megazord on the block, and is the main robot used by the Super Megaforce team. Let's check out how well Bandai of America did!

To kick off this review, I'll start by mentioning the five Zords that combine into the full Megazord 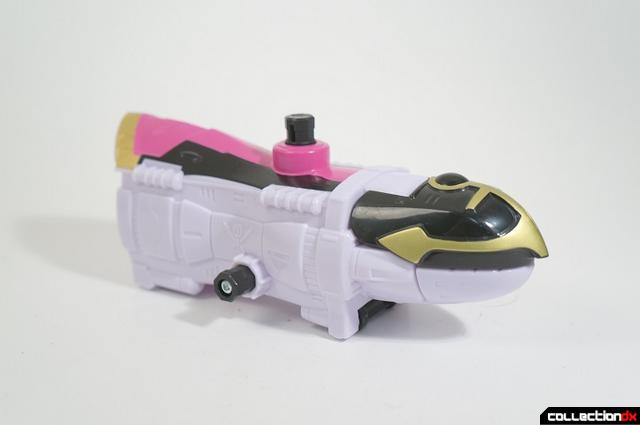 The Super Mega Sub Zord is basically just a white and pink submarine. It doesn't do very much on its own, except roll around on its wheels. There's not much to talk about here. 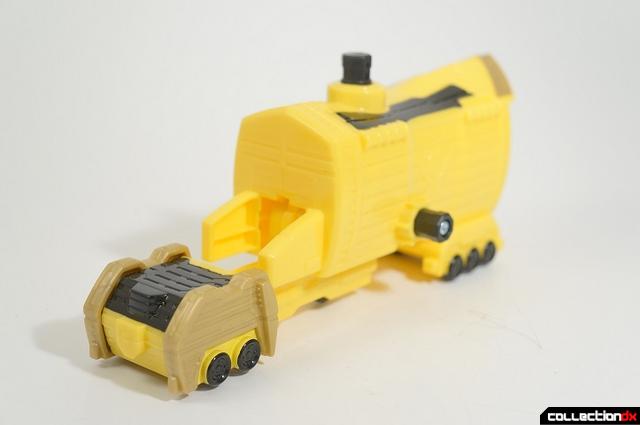 The Super Mega Wheeler Zord is a big yellow truck. Once again, it does very little on its own other than rolling. The paint on this one is alright, but not as great as it could have been. 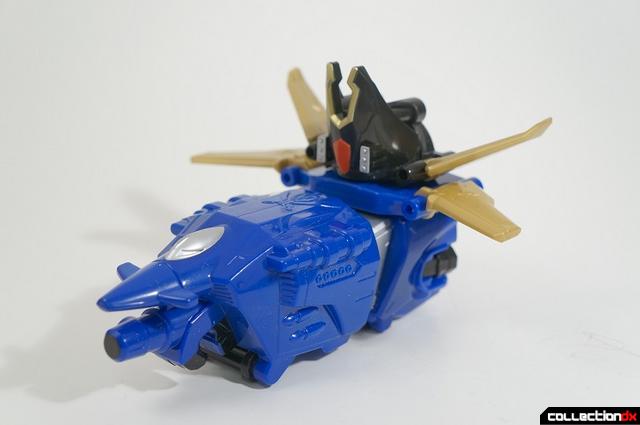 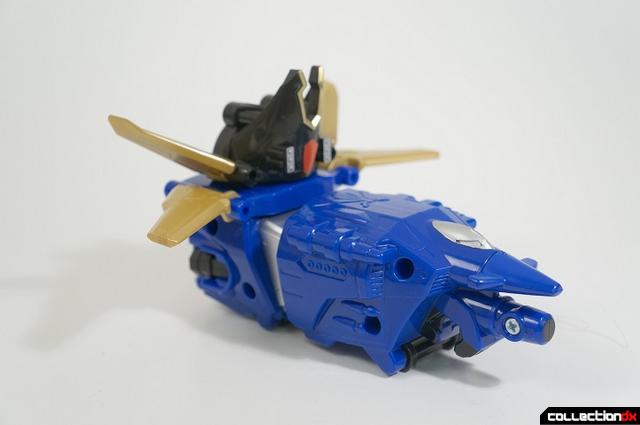 The Super Mega Jet Zord is a small blue jet. It also has wheels so it can roll around. This is one of my favorite Zords in this set, but not for any particular reason. I guess I just like jets. The Megazord's pirate hat is attached to the top of the zord. 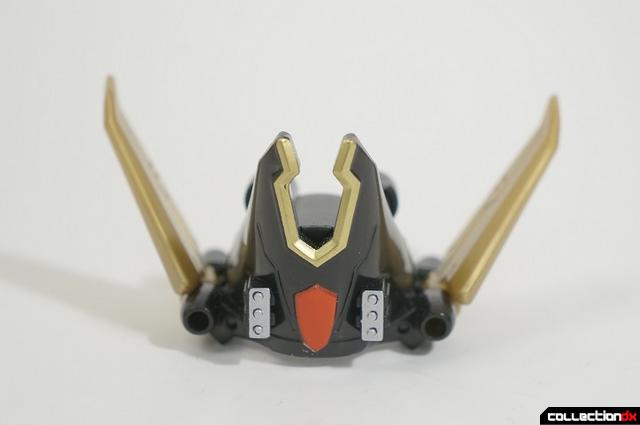 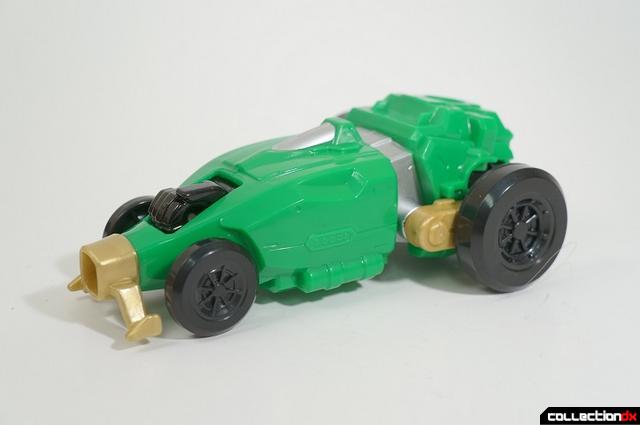 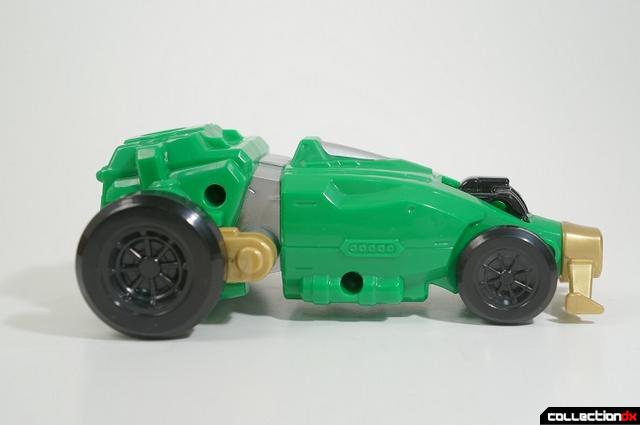 The Super Mega Racer Zord is a large green race car. It can obviously roll thanks to the large wheels attached to it. It also has a fist coming out of the top of it. 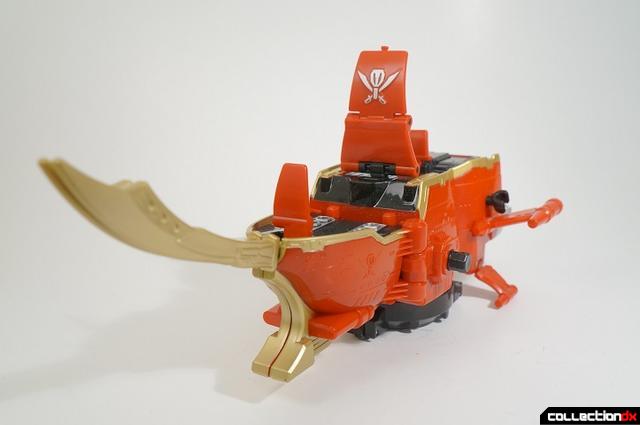 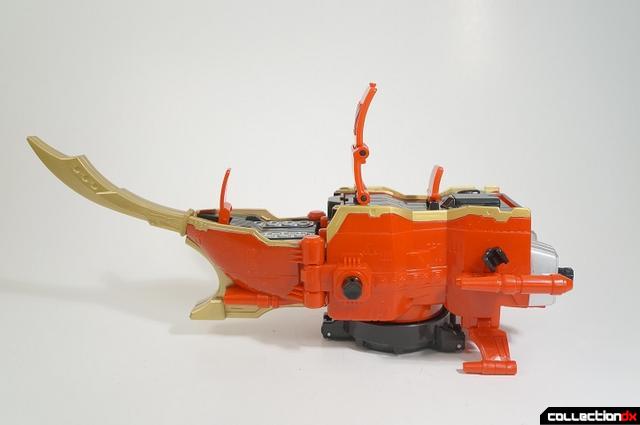 And my personal favorite of the bunch, the Super Mega Sky Ship Zord is awesome. It's really big and chunky. There's a good amount of paint on it, and there's tons of play value here. 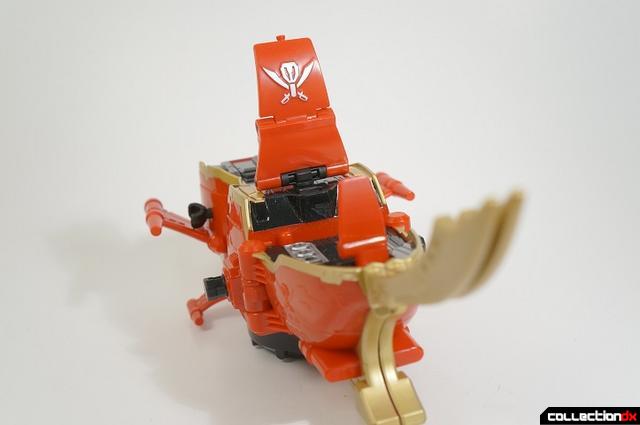 The Megazord's swords clamp together and attach to the front to make it more ship-like, and the bottom of the ship has small wheels for rolling it around. 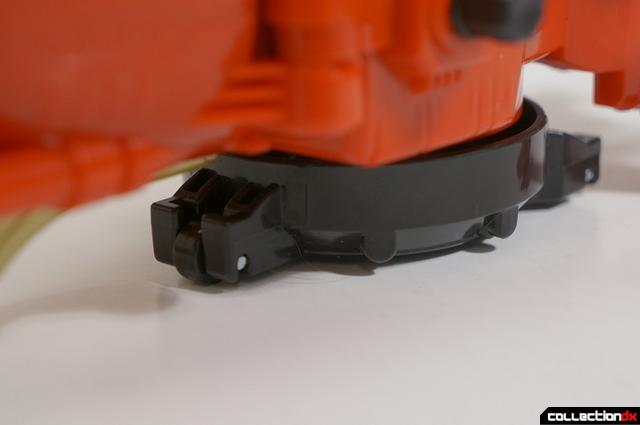 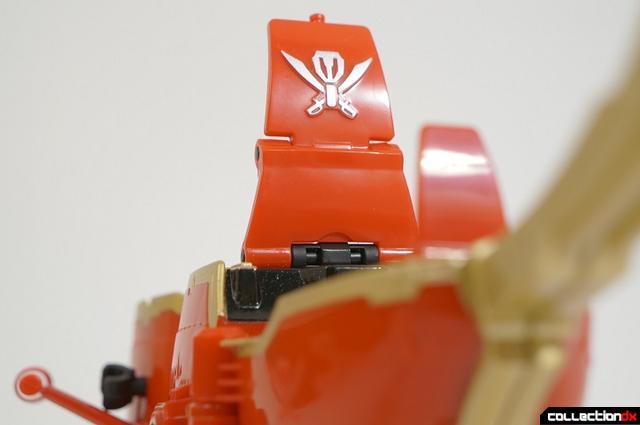 It's actually a really fun ship to play with. I had a great time just flying it around my desk so I'm sure the kids will enjoy this one.

Alright, so transformation is really easy, and involves basically just slapping everything together. To see the transformation, you can watch the video review up top. 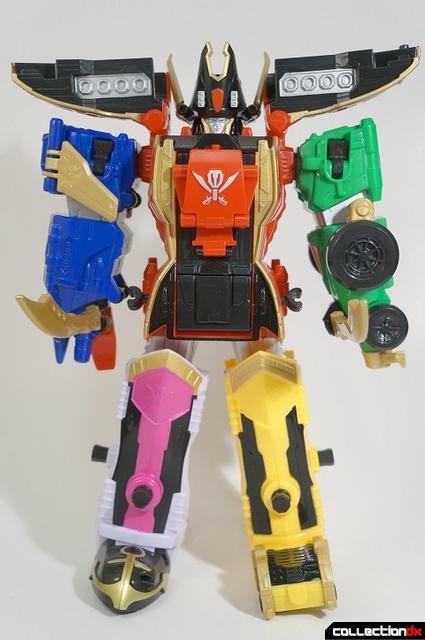 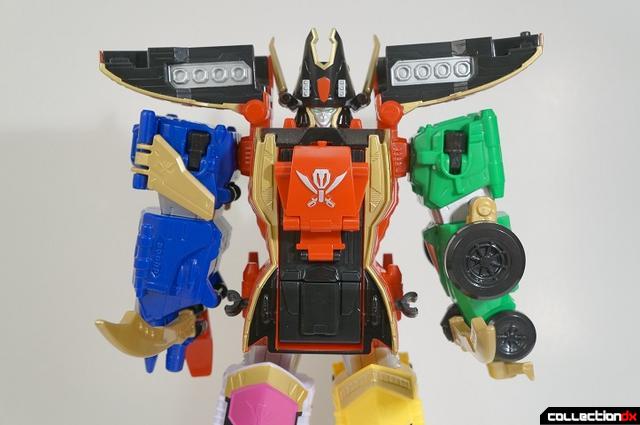 In its transformed state, the Legendary Megazord looks awesome! My love of Gokaiger probably has a lot to do with how much I love it, but the toy does a good job of standing on its own merits. 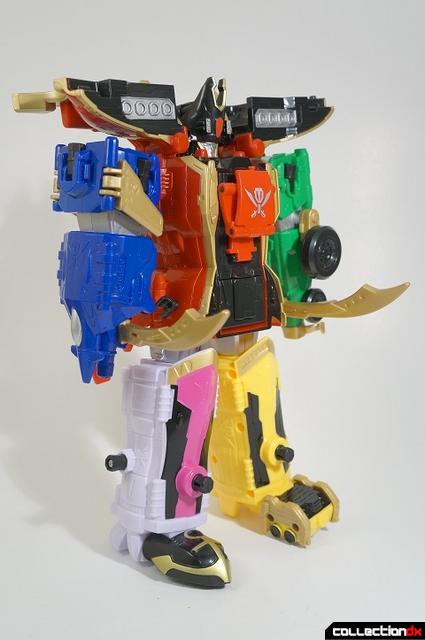 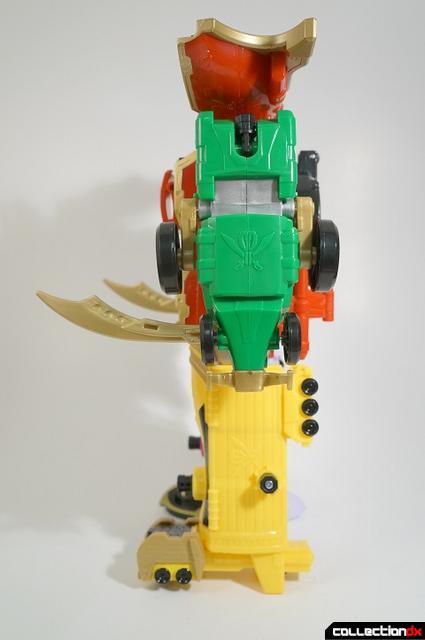 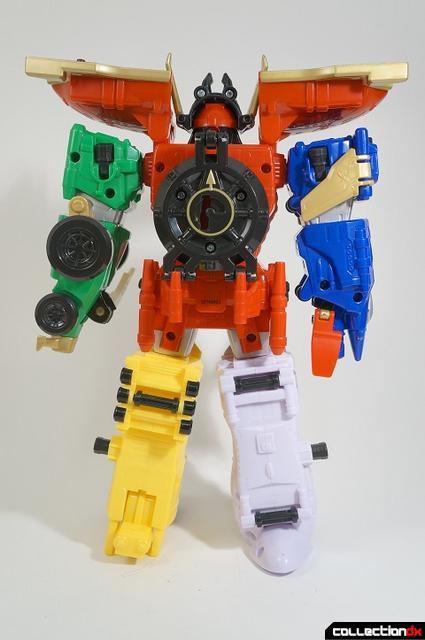 While there isn't a whole lot of painted detail, this can be excused because of the price point and intended audience. This is a $30 toy meant for children. Adding a lot of extra parts and painting the whole thing would have made it cost much more, and Bandai has tried to keep costs low to entice parents into buying them for their children. That makes a lot of sense. Growing up, my parents would never buy me expensive things because they knew I would most likely break it or lose all the parts. This alleviates that issue entirely. 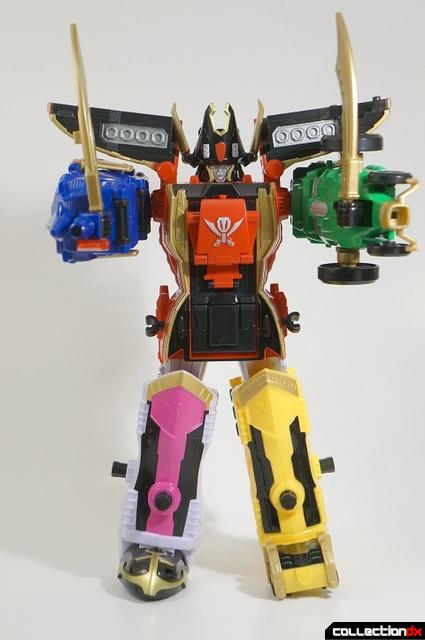 Plus, if you MUST own a version of this that has immaculate paint apps and moving parts, you can always spend twice the amount of money and get the Japanese version, then pay to import it to the US. 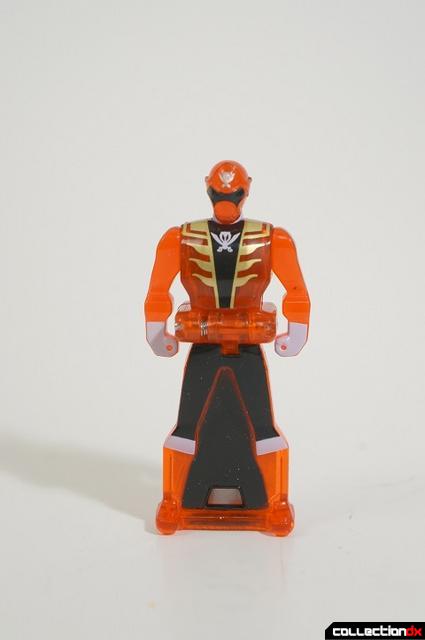 The Legendary Megazord also comes with a Ranger Key! It's a special see-through version of the Super Megaforce Red Ranger. 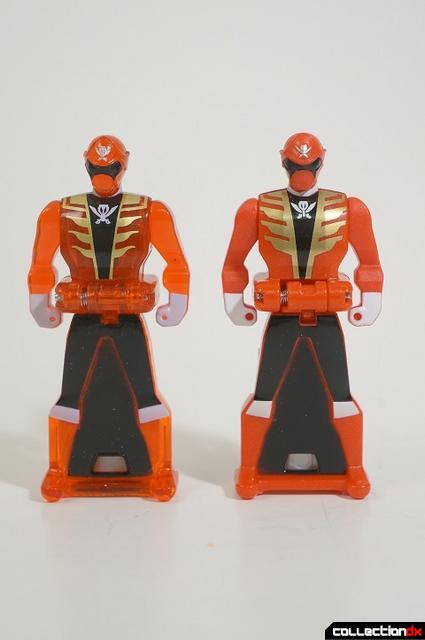 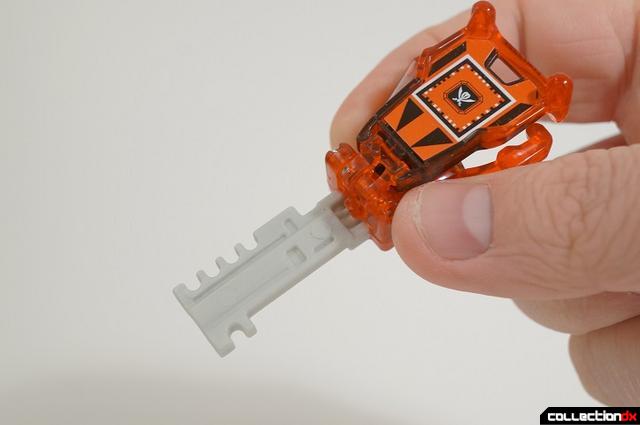 The key is really fun to play with. It's very small, but has a nice spring gimmick that lets it automatically flip up into key mode. That's really cool. 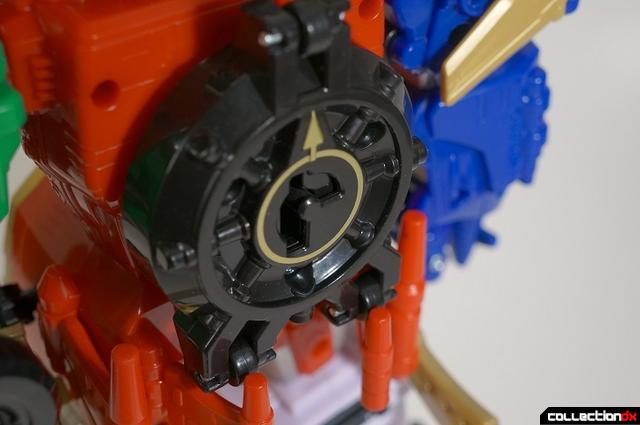 You can insert the key into the back of the Megazord and turn it to open the front. 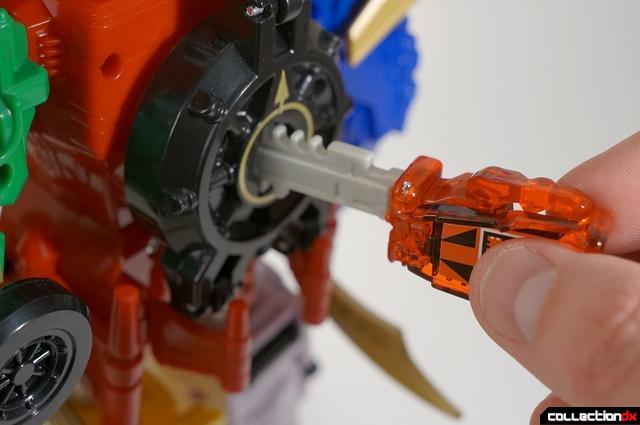 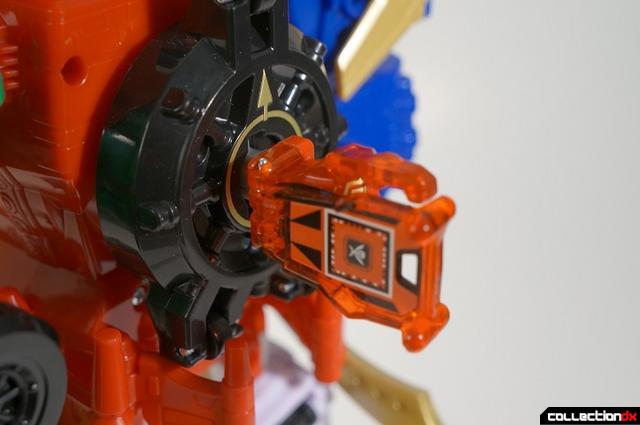 This allows you to add additional zords and things that will come later. The key doesn't fit all that well, though, and there isn't any sort of satisfying click or anything. 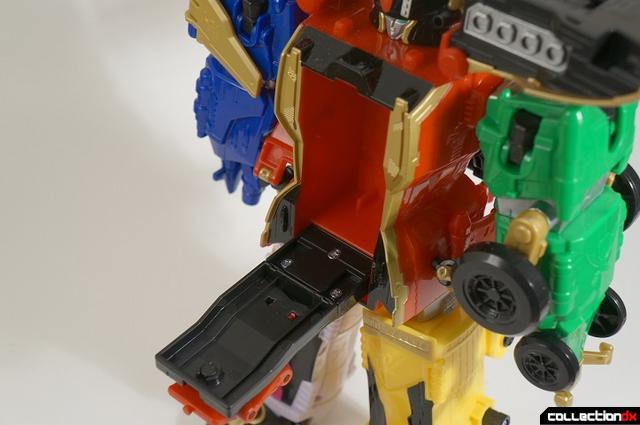 You just sort of jiggle it and the front pops off. 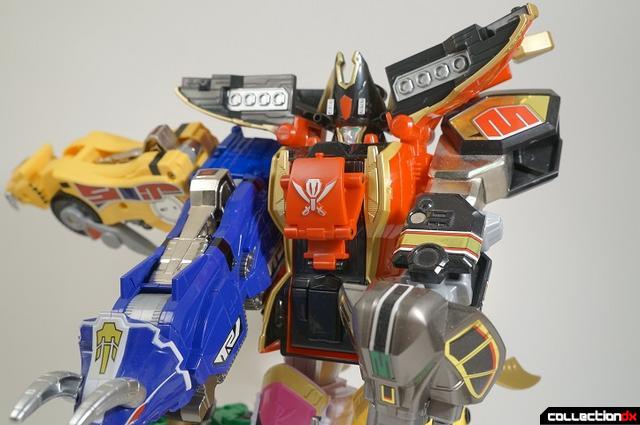 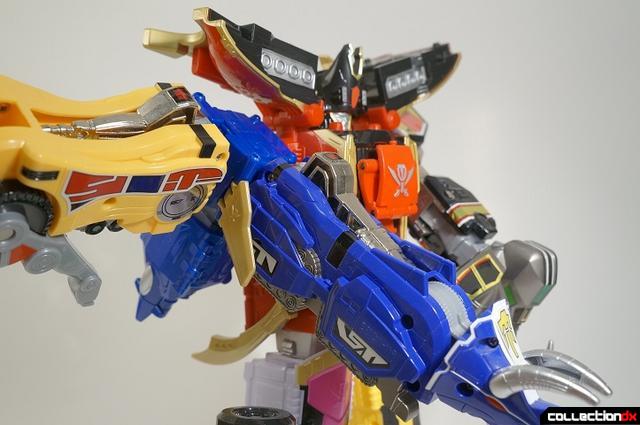 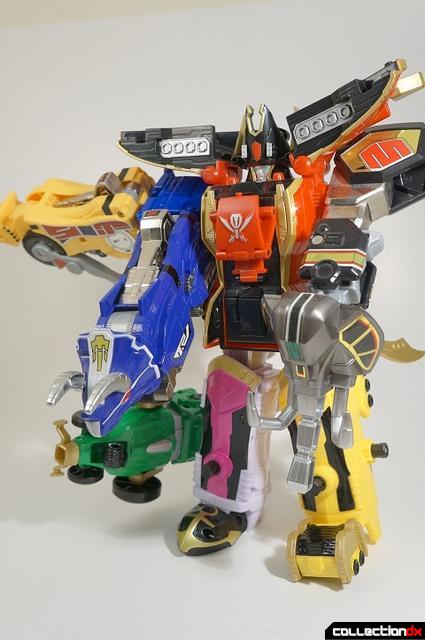 BA could still easily release their own $50.00 Dlx Megazords today. They did it back in the day and no one complained [loudly], and by going from an average $25 price point to $50, the quality of these toys would go through the roof and actually be comparable to their Japanese counterparts. Hell, even a $40 release would make a difference.

There is just no appeal to these things for me if BA is gonna do the barest minimum, and that's pretty much what they've done since 2007. (The sole exception to this was their re-sized Spirit Zords from "PR Jungle Fury", which I reviewed on CDX, and remain of exceptional quality years later.)

You also have to look at it from a practical perspective. They have to keep their products affordable at a time where manufacturing is really expensive. Sure, having a 50 dollar Megazord would make the quality better, but they wouldn't sell as well. Just look at the imported Shinken-Ohs. They basically just sat there on the shelves.

I'm not asking BA to begin importing all Japanese toys again; those days are long behind us, sad as that is. If BA wants to take the time and effort to remake all of the Dlx transforming Zords, then they needs to take the steps necessary to do it right. But if BA wants collectors to invest, and don't want to get sued because a kid swallowed a paint fleck or cut their fingers off on razor-thin plastic, then they needs to step up their game. $40-50 sounds just fine, even in this market.
We may not get them in the same size as the originals, and specialized [electronic] features may be removed, but at least surface details and general appearances will be more screen-accurate, and joints will be the right fit and tightness, the plastic won't be oily, and they can be more generous with their paint applications.

Well, the Shinken Ohs were almost 100 bucks, and only at TRU. In addition, any "super" fan inclined to get one would have already gotten one a couple of years ago, knowing (or thinking) that BOA wouldn't import it anyway. Seems like we're still getting the Goseiger imported mech, though.

Didn't they release the Jungle Fury zords in an expensive, just-like-the-Japanese-release version and the cheaper, BOA-initiated one? I wonder what the sales were like, but they probably skewed towards the cheaper releases. Otherwise why go with these completely new, shrunken molds, whereas before they could at least just strip paint apps and such to get costs down. But the year before, they had introduced the less detailed/completely different Boukenger/Operation Overdrive zords, so again those that were inclined to want the Japanese DX version probably started importing after that.

I seem to remember Power Rangers toys selling really well, even before these changes, at the higher pricepoints. I can't remember them ever being clearanced out, either. But BOA is still cranking these new designs out, so it must be working.

On a side note, I always wondered why they didn't just take the molds from the candy toys, assemble them, paint them and sell them here? Licensing issues?

Great review, the only Super Sentai Robot/Zord I've wanted to buy in 30 years!

In your pics, I can tell that BA has lessened a great deal of detail that is present in the original DX version. I also noticed that they added the ranger key gimmick to activate the Gokai cannon instead of spinning the steering wheel at the back. How tall is the American version compared to the DX version? Hope you can do a side by side comparisson .

I enjoy having the DX Gokai-Oh in my collection and don't mind at all that it's almost a brick due to the spring mechanisms and the parts upgrades. Its sheer size and unique design make this a wonderful piece :)

That said, I REALLY like that it's a Zord Builder set, given Gokaiger/Super Megaforce uses old team powers as their main gimmick. That silly pic up there with the Legacy Zords plugged in? See if you can find the pic from another review where the Gosei Zords were plugged in. "Recursion" only begins to describe it.

I'm new here, and I'm impressed with what BOA did here. The did a great job of recreating Gokai-oh for Power Ranger fans. Are you going to review the acessory mecha? Great review, and awesome site by the way.

I love Gokaiger and Goseiger, I see they mixed both shows, what seems kind of weird to me... how saban mashed them up? Im curious but dont watch the american versions of tokusatsu

Half-way through Megaforce, the alien armada shows up and Gosei (their version of Master Headder) gives them new morphers. The Ranger Keys let them use beefed-up versions of the old teams' powers, but only for a short time. After the first couple of fights, they stop using their Gosei powers entirely in favor of the new ones.

Posted by KingStarscream on 7 April, 2014 - 12:45
Do you have the Legacy Dragonzord or original MMPR Deluxe Zords?

If so, you kinda missed a photo-op. There need to be more photos of this next to the Mega Dragonzord