Home » Bandai » King Kong The 8th Wonder of the World

King Kong The 8th Wonder of the World

I've been a fan of the S.H. MonsterArts line since it was just an announcement. Even though the name doesn't specify that it's Godzilla related, we just assumed all the figures released under MonsterArts would be Godzilla related. During our visit to NYCC 2012, we hit up the Tamashii booth where we saw a really nice display of the then tentative King Kong S.H. MonsterArts figure. At the time, there was some licensing things to work out for it's release but I was confident it's release would happen. Now it has happened and I am glad to have this figure in my hands.

I grew up watching reruns of Godzilla and obscure Japanese monster films so naturally I would grow up to collect them. Although most of my King King attachment is to the silly old movies, I like this modern version of King Kong as seen in Peter Jackson's 2005 film. It is much more realistic than any previous Kong.

King Kong come in a bigger-than-standard MonsterArts style box with Kong peeking through its clear window. 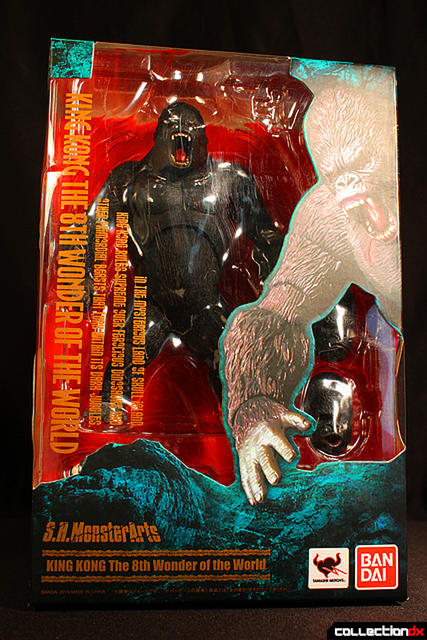 The backof the box shows a bunch of figures of what I am to assume is the prototype because one of the poses simply is not possible on the production figure. I'll get into that later. 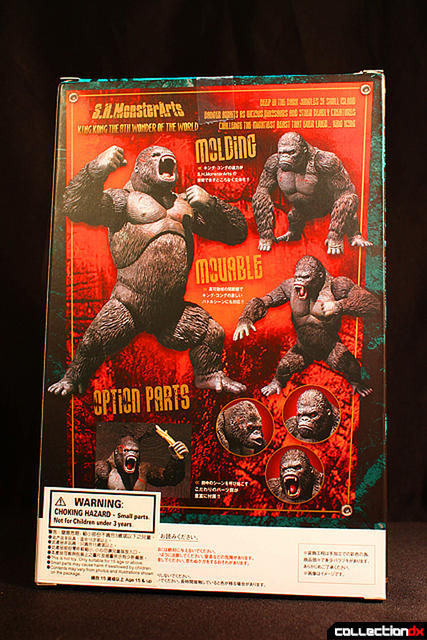 The figure requires no assembly or attachment of any parts right out of the box. Out of the three available faces, Bandai chose the most aggressive one to show off the figure prior to spending your hard earned money on it. The figure lacks any real contrasting features on his body aside from his teeth and eyes. It is all colored with a dark grey, almost black plastic. 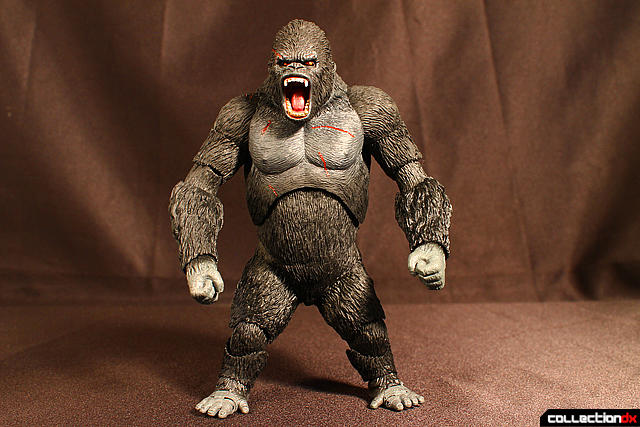 If I am not mistaken, the Kong in the movie had the gray down the back. This detail is absent from the figure. 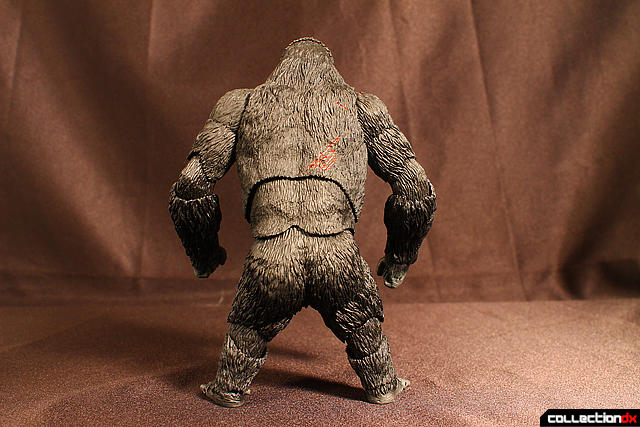 The sculpt is absolutely incredible. almost feels like he's going to come alive and bite me. The face detailing is very clean and realistic. 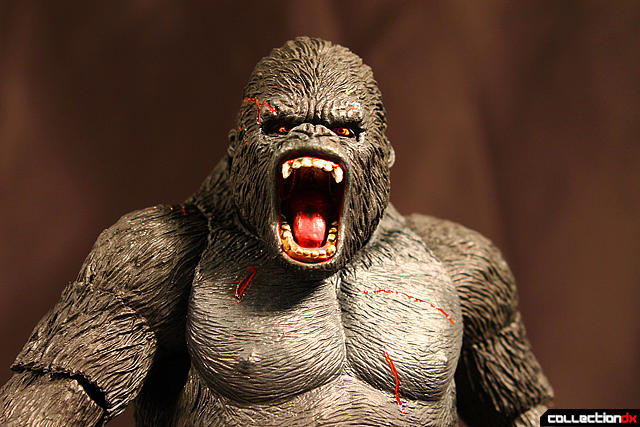 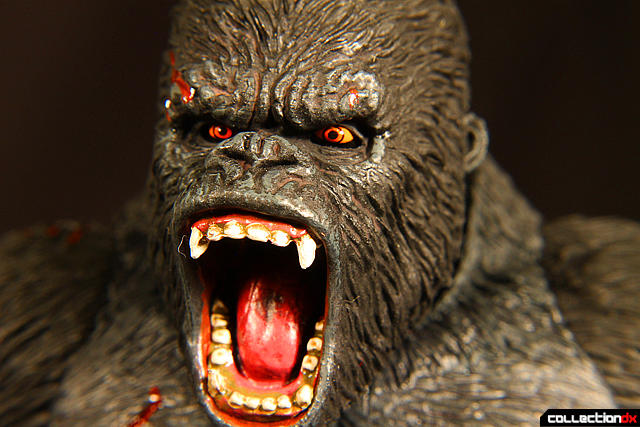 Kong comes with his chest-pounding fists to create poses like this. You can almost feel the thud of each strike of the chest. 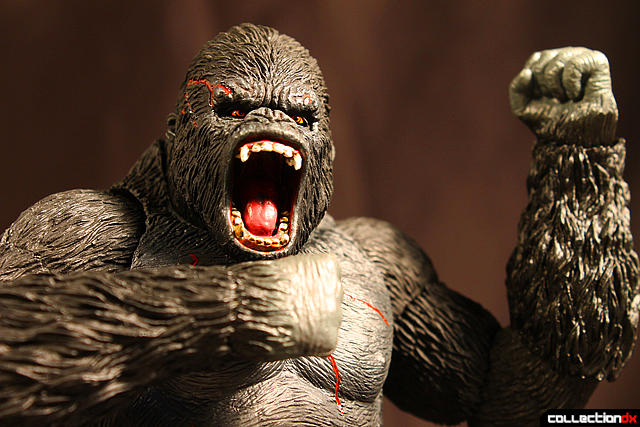 Kong also come with open hands which I could have used for a better pose than this, but this is me we're talking about. This is my "GREAT BEARD OF ZEUS, MY PALMS ARE HAIRY!" pose. 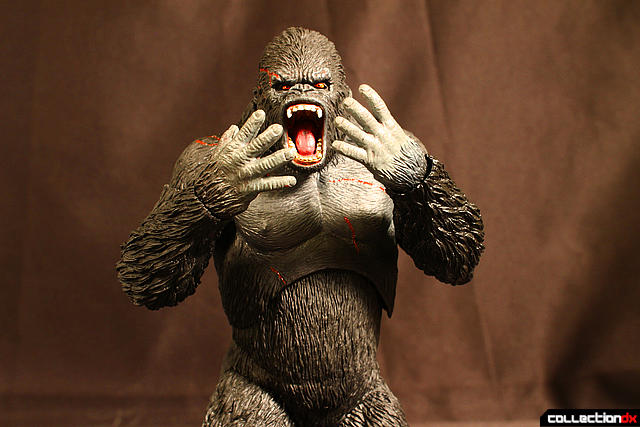 If the angry face is a little too much for the pose you have in mind for him, he comes with a calm face too. Which still looks like he's pissed off. Look at how blood red those eyes are. 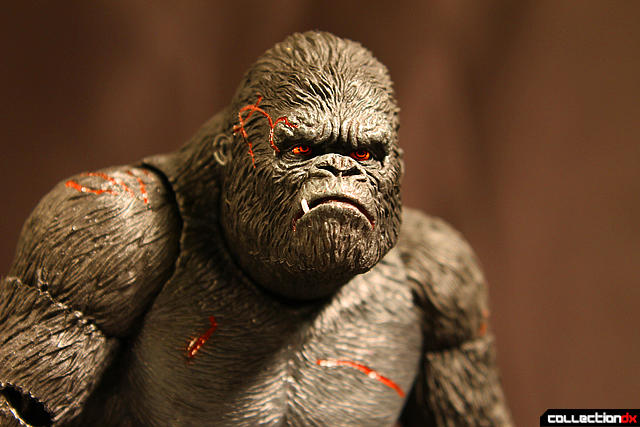 Even though most of the body is just black, the parts that do stand out stand out real well. For example, check out the gashes on the side of his head. They contrast extremely well due to the bright red color and extreme glossiness. Really looks like a fresh cut filling up with blood. 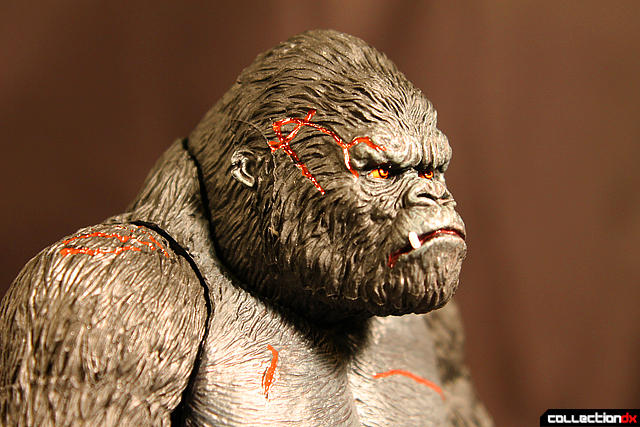 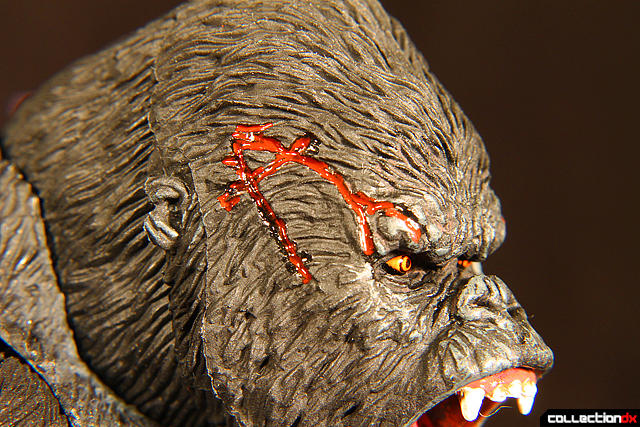 I mentioned in the beginning that there is a misleading pose shown on the back of the box. It shows Kong on all fours with his head almost straight up. This leads me to believe the back can arch a great deal and that the legs are more articulated than they really are. While I was able to get close to what is shown, it wasn't quite as extreme as the box photo. Also, the amount of pressure required will make most collectors a bit reluctant to simulate the pose since the plastic will lose it's matte finish if forced hard enough due to rubbing of the plastics during posing. Another downside to reaching these limits is the popping off of body parts which are attached via ball joints. 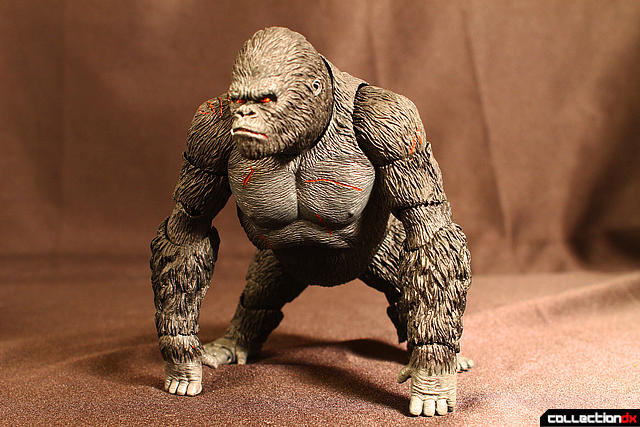 While Kong can stand well on his own, there is an included clear stand which also allows for some other monkey business. 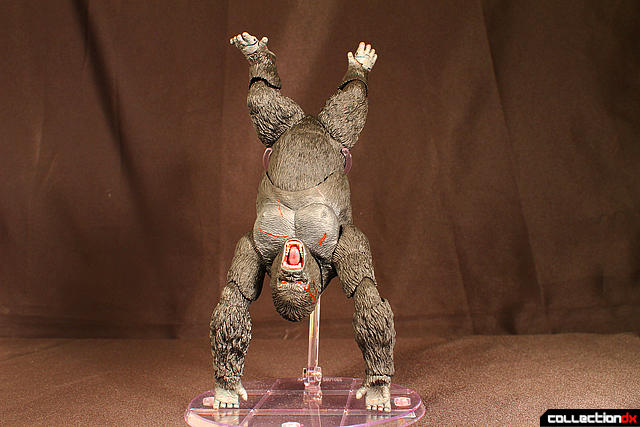 The set also comes with an alternate hand that happens to have an Ann Darrow permanently attached to it. Don't expect much in the way of face detail here folks. There is none. Definitely not as pretty as her on-screen persona. 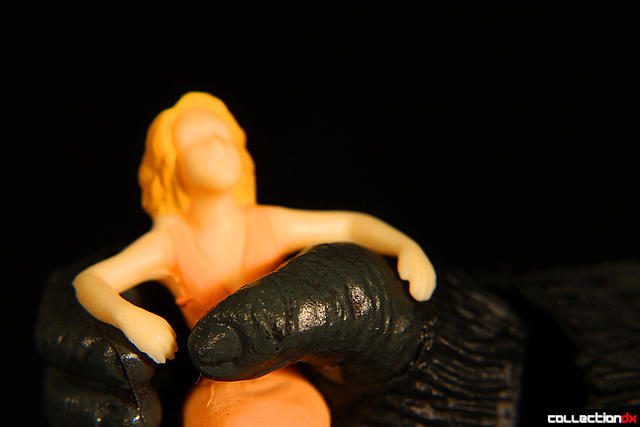 Listen sweetheart, I've been hearing rumors that you've been running around with another man see. What have you got to say for yourself? 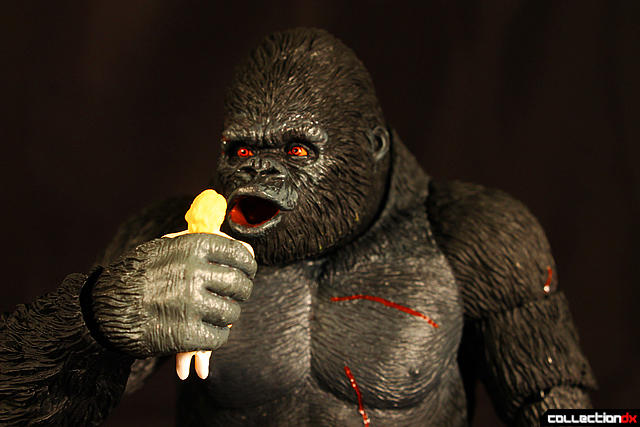 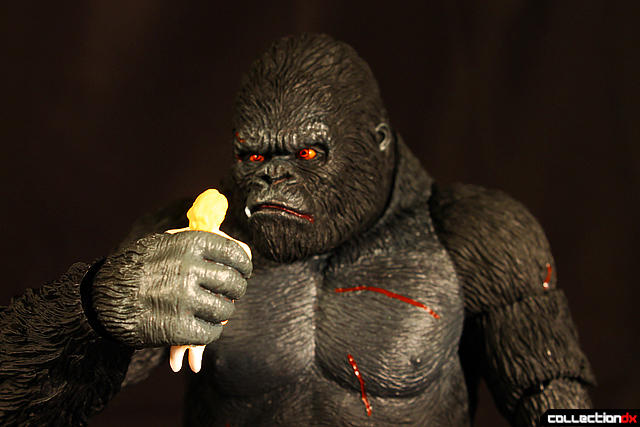 Don't give me the silent treatment! Why I oughta... 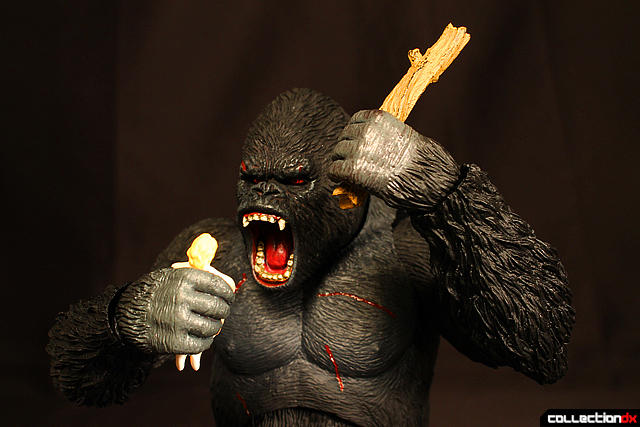 So you're the wiseguy my dame's been seeing? I know you're in there Roy Focker! Get out before I beat you out and let's handle this like gentlemen! 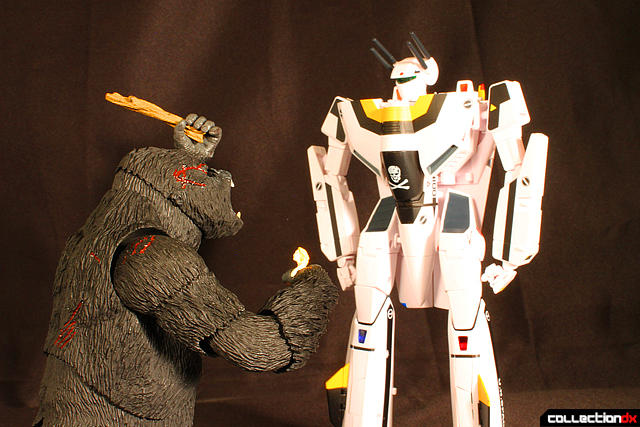 And as for you sweetheart, If I can't have you, nobody can, see! 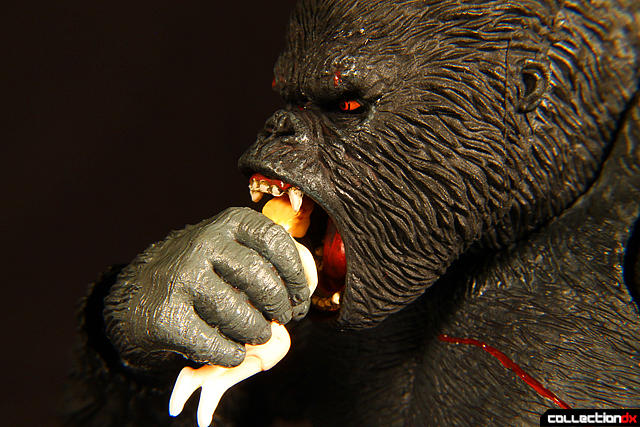 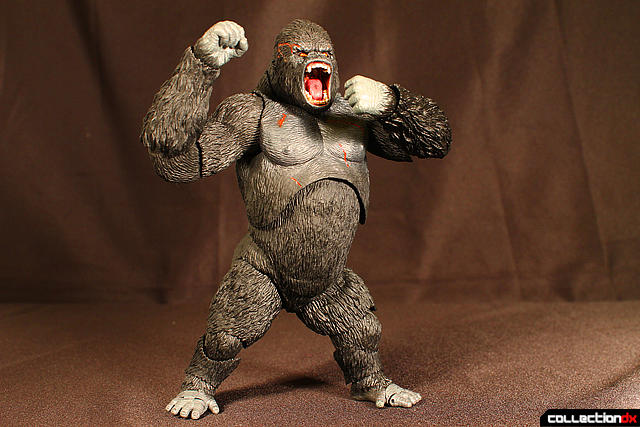 So overall, not bad for a highly poseable King Kong figure. Definitely the most articulated. Any King Kong fanatic would love this in their collection.

3 comments posted
OF COURSE it was Roy Focker

OF COURSE it was Roy Focker who stole Kong's girlfriend! It just makes so much sense! He's the only one with the ravishing good looks, charisma and gentlemanly bearing that match Kong's own, and the jet piloting skills to compete with Kong physically!

That......actually makes sense. Yet either way he dies while he's drunk so Kong can have his gal' back

On another note, Why do I hope a Monsterarts figure of Johnny Sokko's version of Giant Robo is made. It doesn't hurt that he fought kaiju mostly in that one (aside from Gangar, Calamity and GR-2 and that android Johnny/Daisaku)