Tron Legacy was a long awaited sequel to the film Tron, and while the film may have received mixed reviews I really enjoyed it. Josh and I made a trek out to see it at a midnight showing in 3D IMAX and one of the first things we said to each other when we were leaving the film was, “I loved that black robe Kevin wore in the second half of the movie.” Apparently Hot Toys agreed and just released a beautiful 1/6th scale version of Kevin Flynn from the film and both outfits seen in the movie are included. 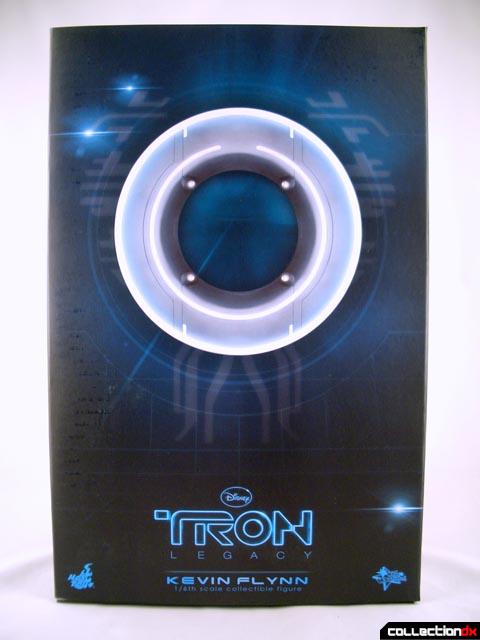 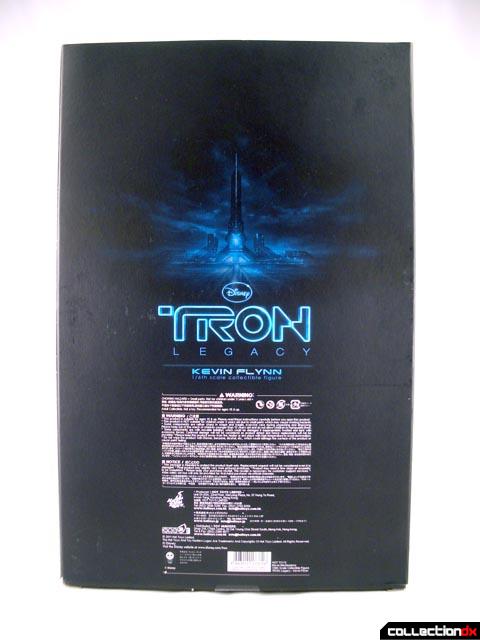 Hot Toys has updated their standard packaging to be a simple window box with cardboard sleeve that slides over the whole box instead of the traditional window box with lid. 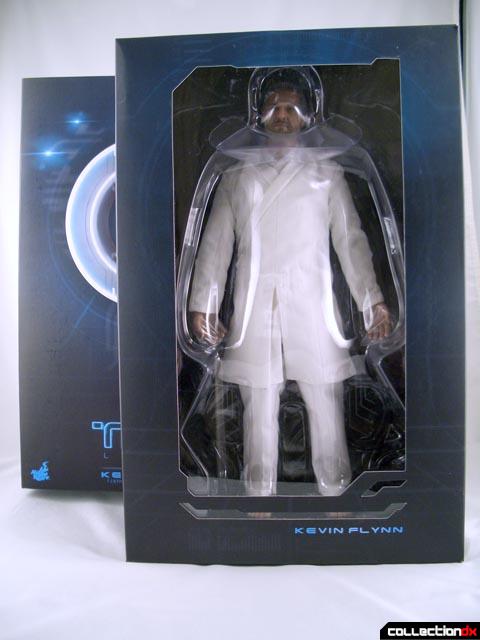 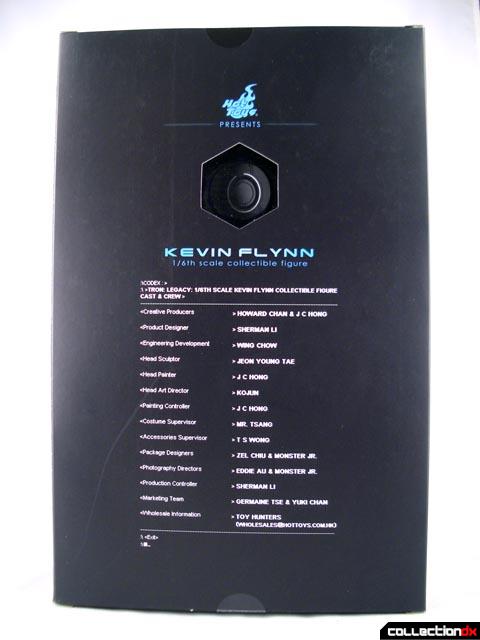 The box and sleeve feature beautiful gloss print on a flat/matte finish. In person the package looks very nice. 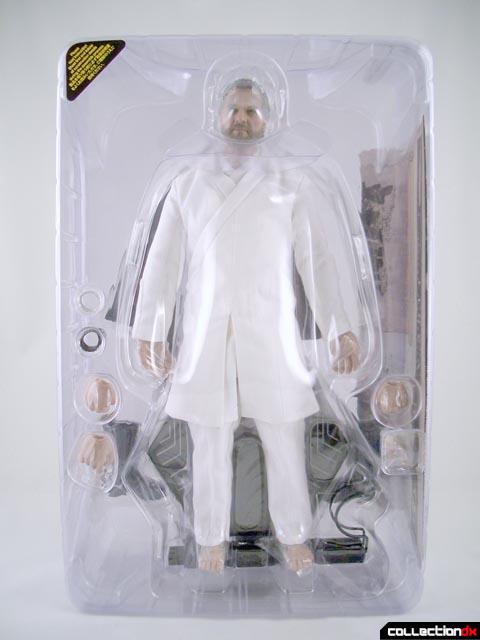 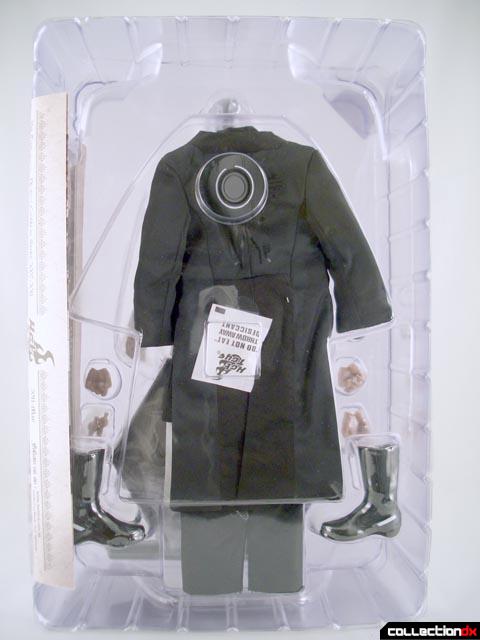 Inside the two nested trays you get Kevin packaged in his white robe with the black robe neatly laid out in the bottom tray. 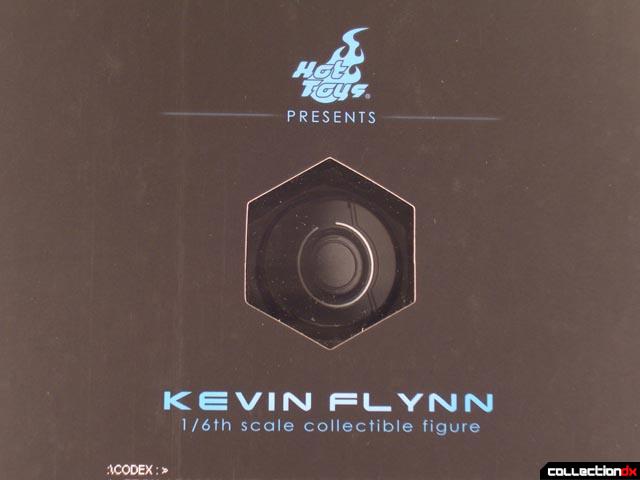 I like that they show off the black data disc in a window on the back of the box. 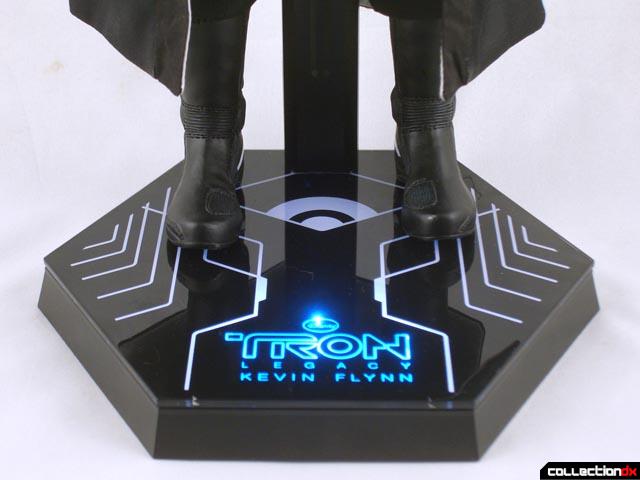 Included with the two outfits is a light-up, Tron-themed base. The best part? Hot Toys always includes the needed batteries for light-up features. 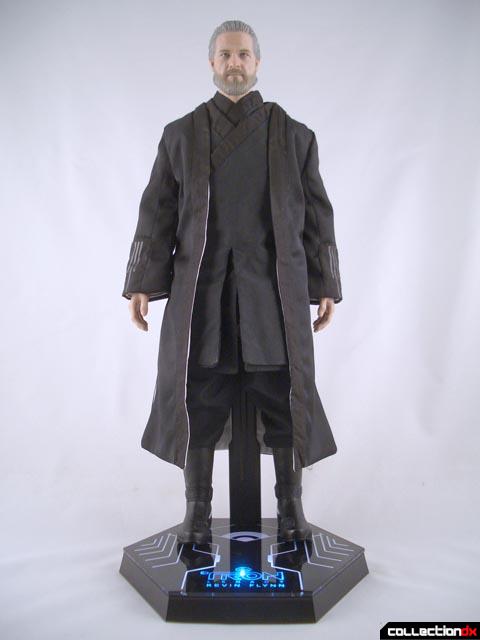 It’s a good looking stand that really goes with the Tron theme. 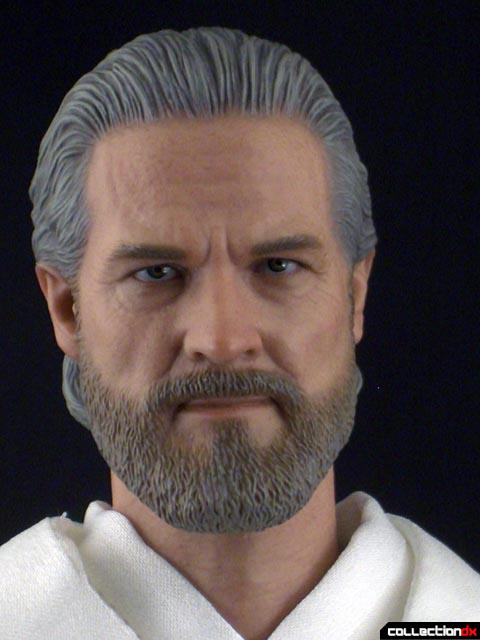 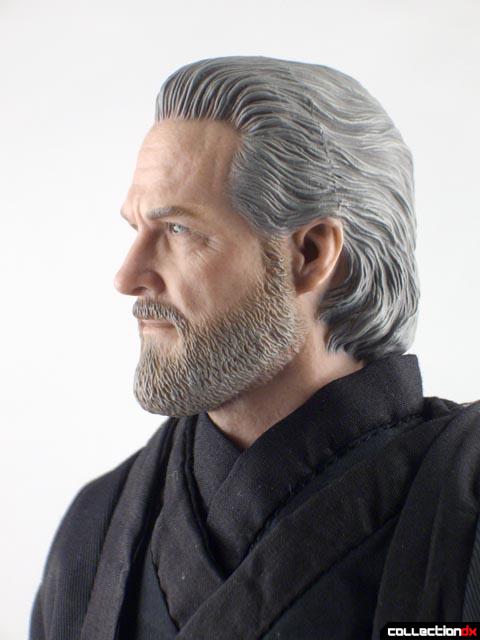 Hot Toys is known for their lifelike sculpts and paint detail and Kevin Flynn is no exception. My only complaint is the eye position. Since this is not an MMS DX release there is no P.E.R.S. eye movement system on this figure, leaving you with a Kevin that appears to be looking slightly up. 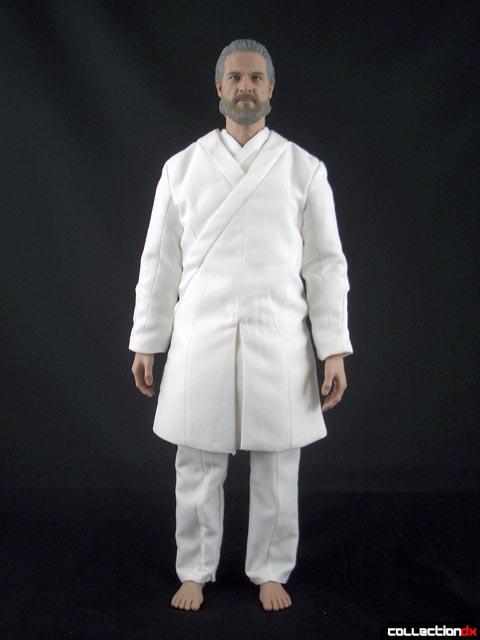 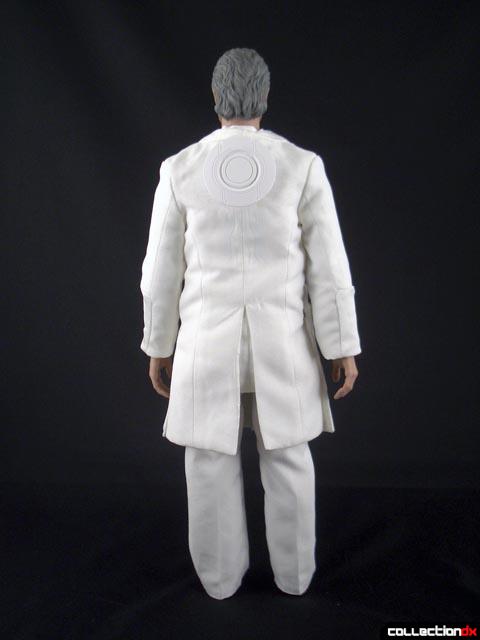 The white robe is what Kevin is packaged in the box wearing. The robe is snow white and sure to pick up dust and smudges easily, so handle carefully. 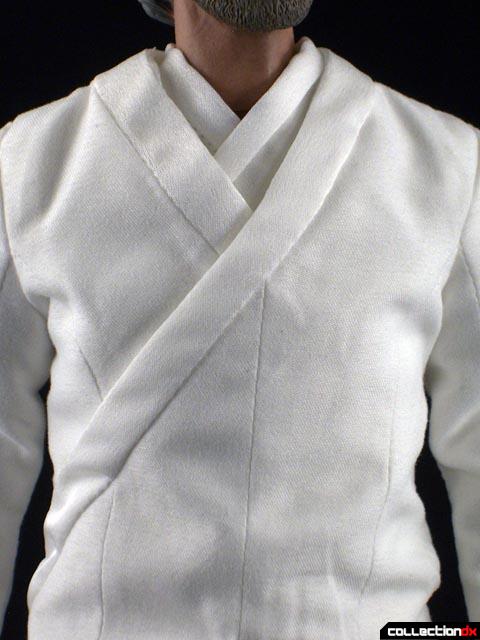 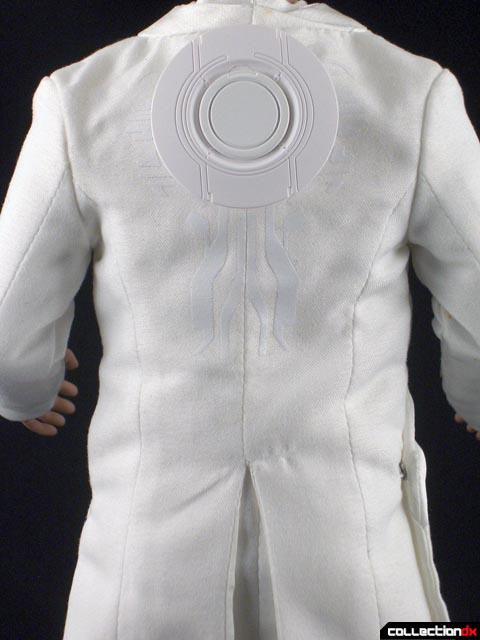 Circuit detail is printed on the robe in a shiny material, helping it stand out against the white robe. 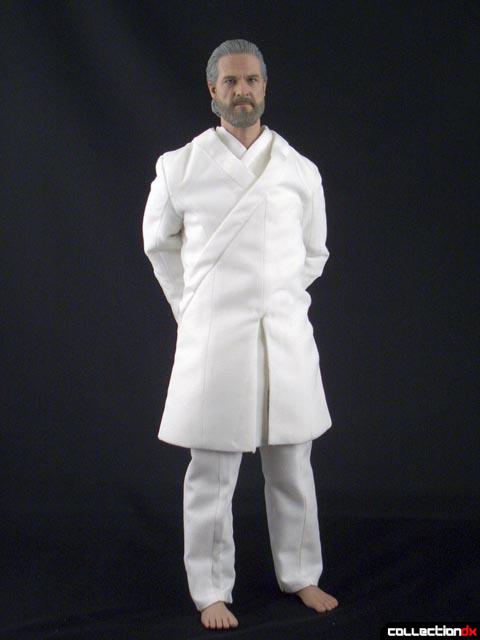 The identity disc for the white robe doesn't appear to be removable. 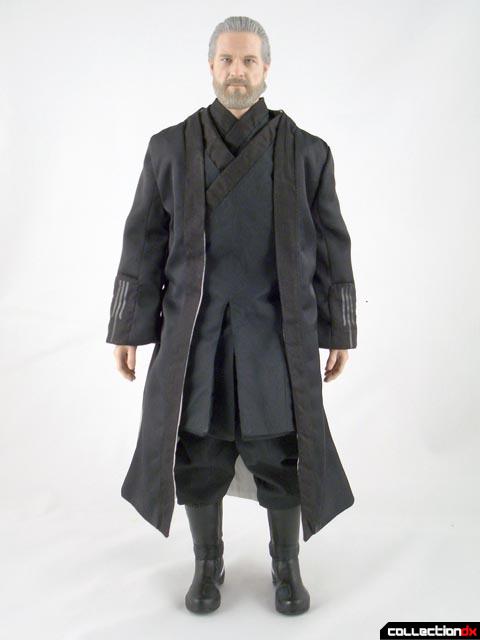 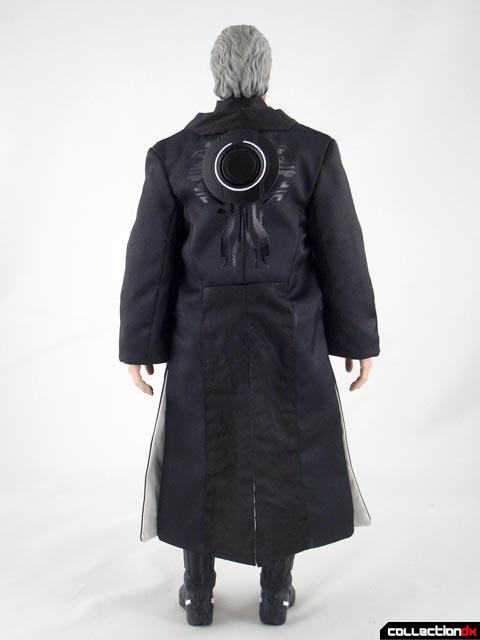 Once I got done playing dress-up with my dolly and got him into the black outfit I was left with a figure I am much more satisfied putting on the shelf. 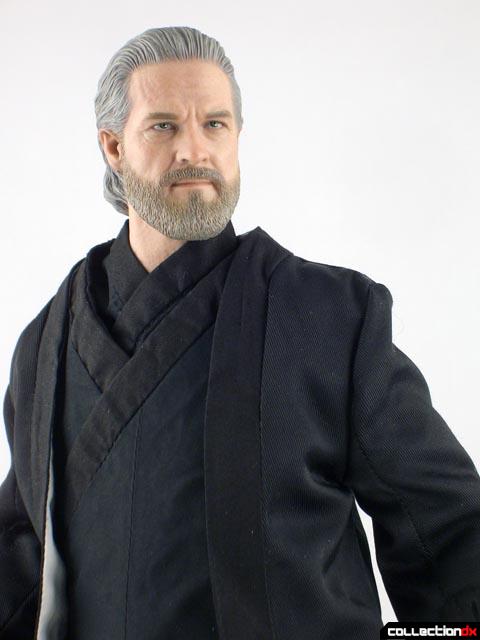 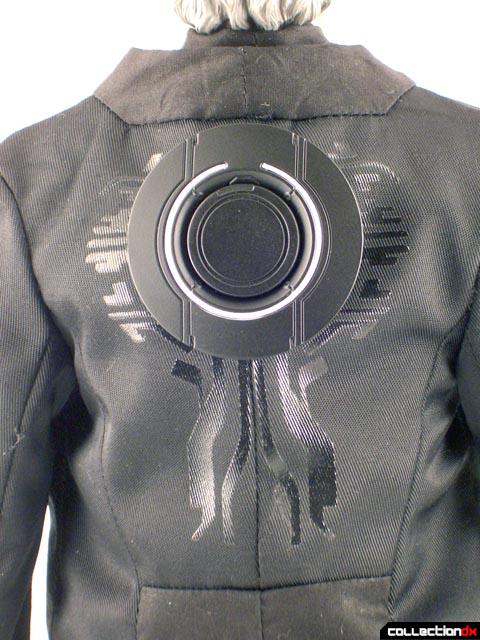 Materials used on both robes are excellent; nothing cheap feeling here. 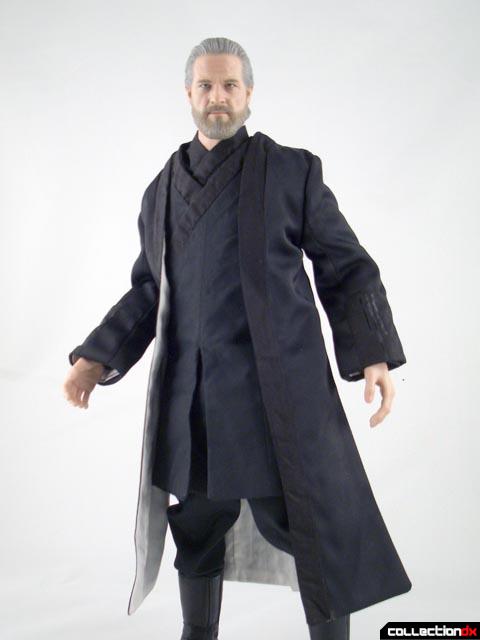 On the back and sleeves the circuit details of the robe are printed in a glossy material helping them stand out a bit more in person. 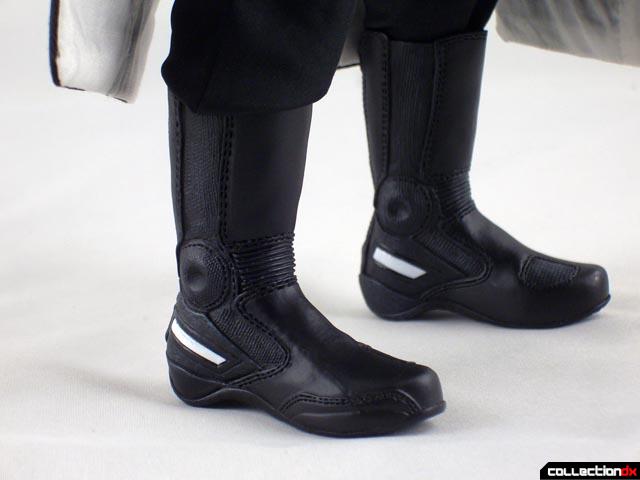 The black identity disc is removable and fits into the disc throwing hand included in the set. 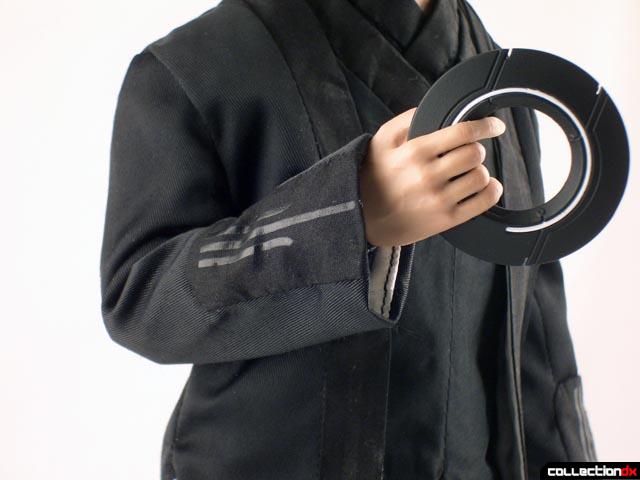 Articulation on the body is excellent and features all the range of movement collectors have come to expect. 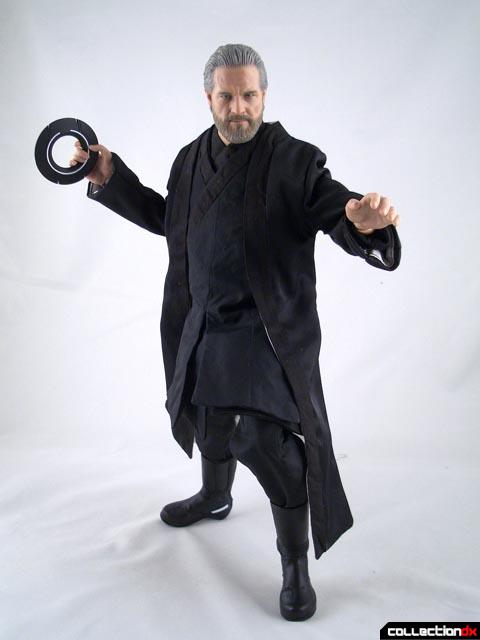 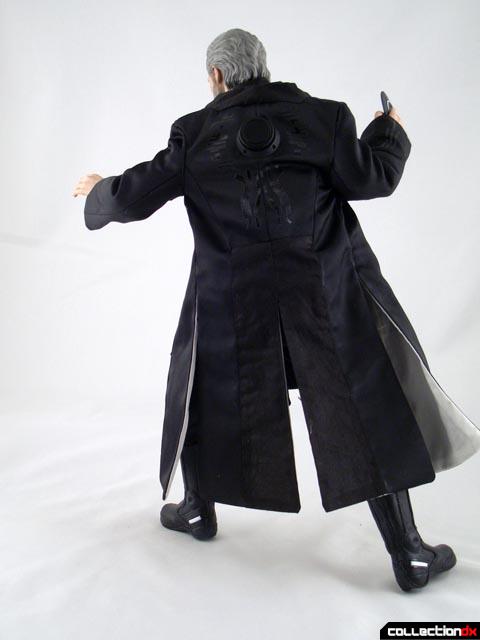 Overall Kevin Flynn is a great looking figure and looks very much like actor Jeff bridges. I am pretty happy with the release. If you liked him in the film and liked the outfit, this is one to grab.

I really think Hot Toys missed a great opportunity with this release, however. Instead of a light-up stand they should have made the interior sleeves of the black outfit light-up like in the film. 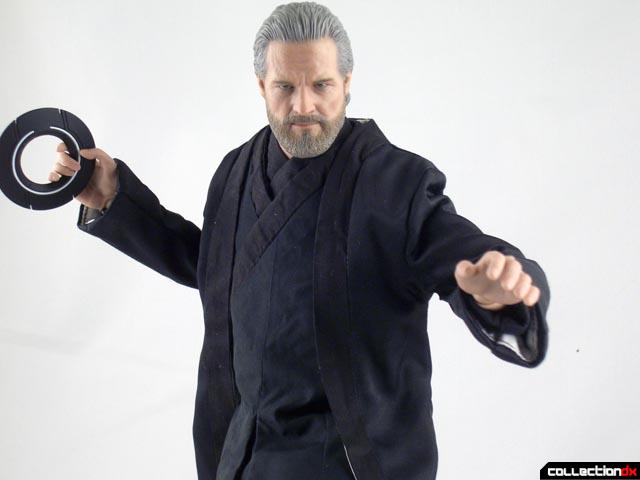 That would have taken a “good” figure and made it “exceptional.”

Nice review as always. It's kind of interesting to see this figure in comparison to the upcoming Iron Monger. Jeff Bridges looks older in the latter figure even though Tron Legacy came later. Maybe it's just all that CGI makeup :3

Not the most action oriented character but at least he can knock on the sky. And it's a good stepping stone for the eventual Dude.

If anything it looks more like Liam Neeson as Qui-Gon Jinn, although that's maybe more because of the hair.

No light-up robe? rats. I mean, I can understand why not--it would have been insanely expensive and probably break after about a week--but still. Like you say, a missed opportunity. (On the other hand maybe they're saving that for the Special Edition version.)

I think it has no light up features because of something Adam touched upon...Companies wait to see how the brand does....like it was said if Tron was a bigger hit the can rerelease a special ed. light up kevin flynn...like the new iron men armors constantly being released. I think it this economy...the bad is that many are less inclined to throw in behind a flop...think how many re-paints and safe stuff has been made lately...it is the smart thing. No that nobody takes risks...it has big rewrd potential. Just not as many. The Yin Yang of existence