It was through sheer luck, that I discovered the Chogokin GM I reviewed here While it's an awesome figure for sure, there's no way Bandai would pick this particular mobile suit to get such treatment and not tackle some other units. All told, 11 Kado Senshi figures were made, in addition to a few repaints. So in celebrating the then 20th anniversary of Gundam, the first unit to go gokin was GD-16 was the legendary RX-78-2 Gundam. 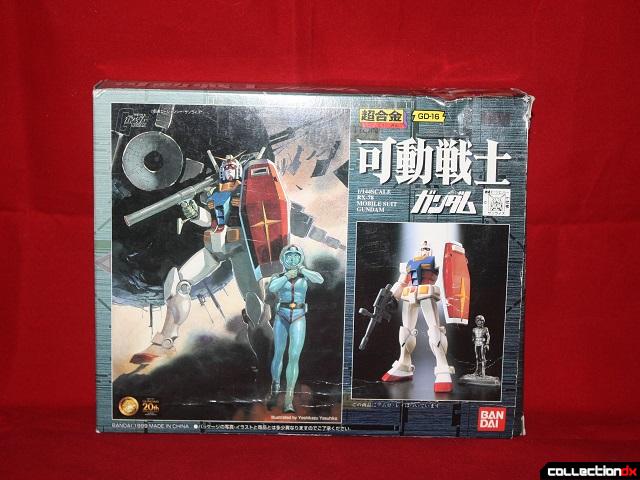 Similar to the GM's packaging, the front of the box shows a good combo of photo and pristine art hyping the toy. Actually, this piece is from Yoshikazu Yasuhiko, the character designer for the MSG TV series. He is also the writer/artist of the Gundam: the Origin manga, and co-director of the Gundam: the Origin OVA. He wasn't the artist tapped for the GM, so it'll be interesting to see if he did box art for any others. 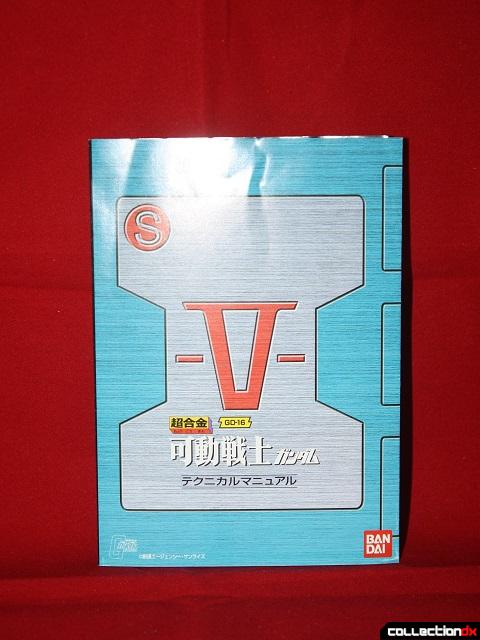 Also similar to the GM, the instruction manual is patterned after the manual Amuro finds in the first episode. Very cool. 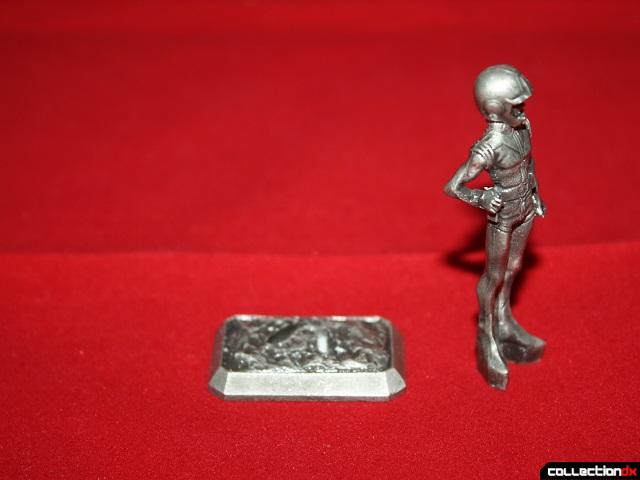 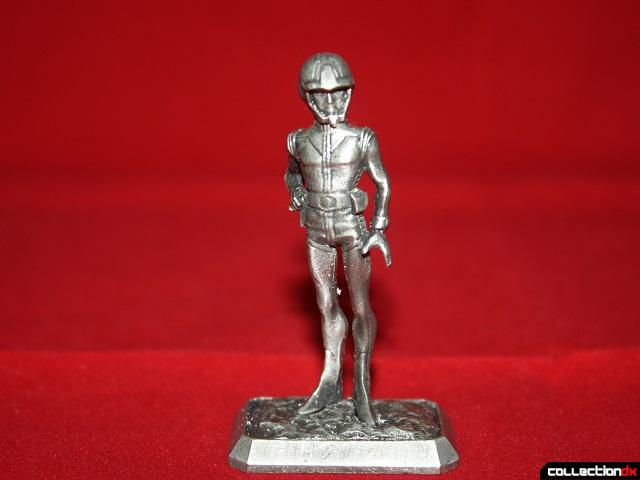 I don't know if this is a regular thing with all the late 90's/early 2000's Chogokin figures or just the Gundam toys, but also like the GM, an extra item is included. This time, it's a small metal figurine of Amuro Ray, who is the Gundam's pilot and the main character of the original series. He can stand on his own or with an small base I prefer the stand since it hides his platform boots, but either way, he's an impressive accessory. While I'd rather get something like the Fanfan, there's no denying the iconic vibes here, even with a roughly 2 inch figure. 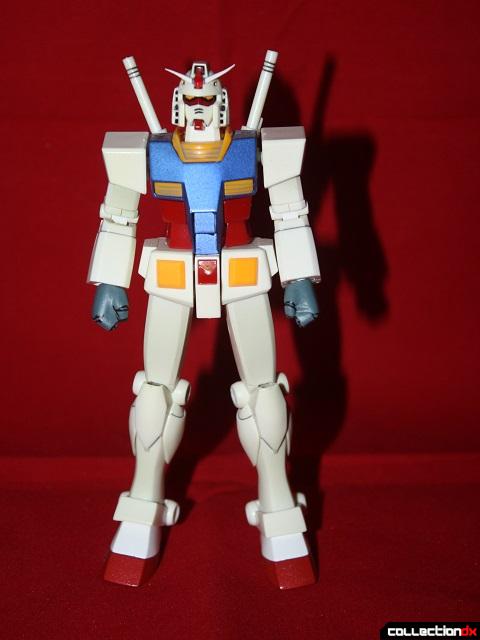 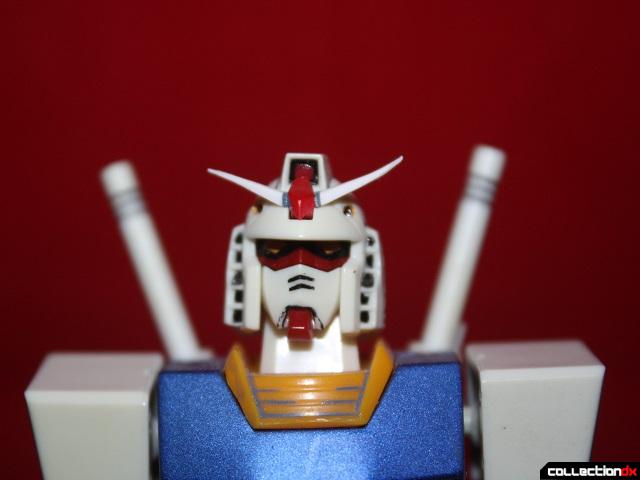 At around 5 inches, the Gundam also looks like it just walked off of the TV screen. The face doesn't always have that look, but it's one of them. The sparkling metallic blue paint on the body and collar are also a slight, but welcome change. Everything looks on point till you get up close to the head. At that point and at certain angles, you can see paint scrapping around the chin, like the Gundam is drooling oil. And the antenna looks like it wasn't finished being painted. It's a little bent too, but that's because of how the box got smashed in the mail. These are all minor imperfections, nothing ruinous yet. 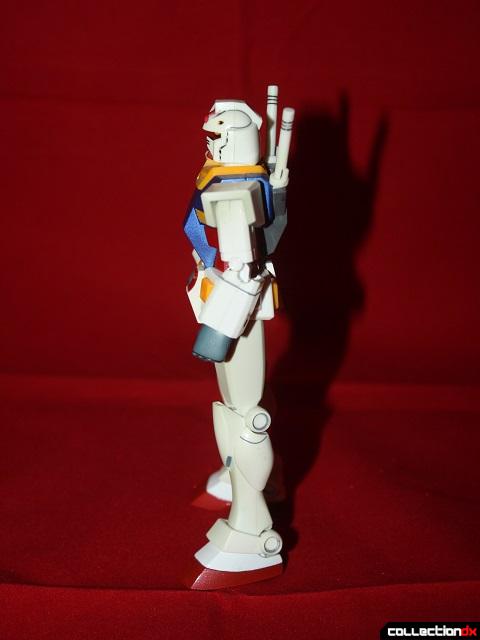 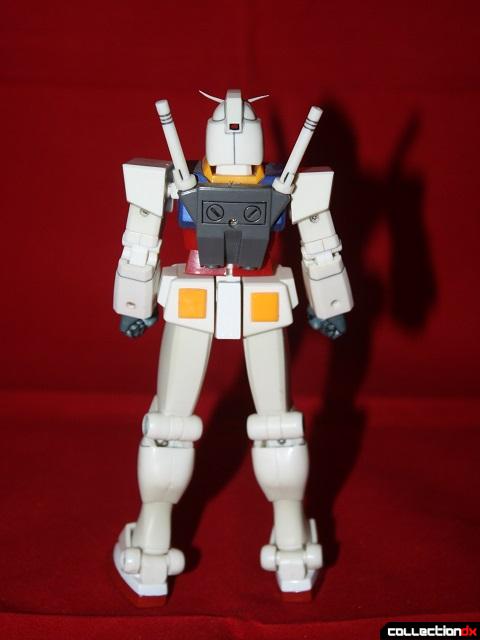 From the side and behind, everything's clean and proper. 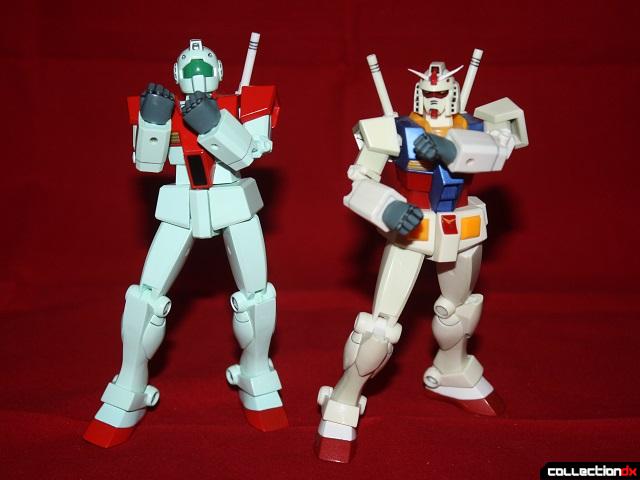 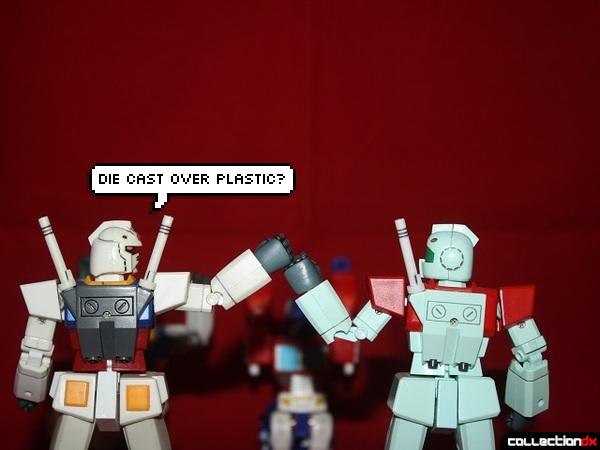 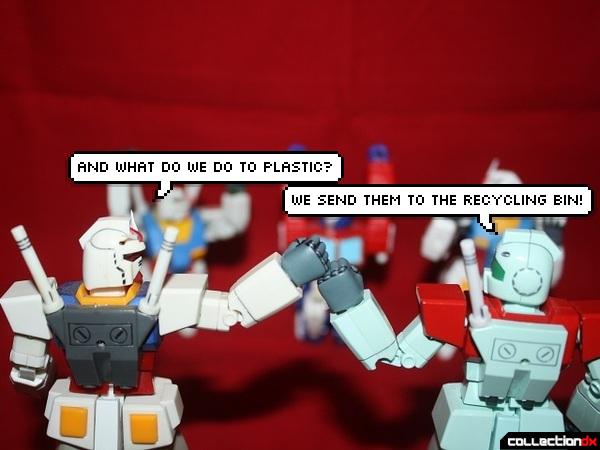 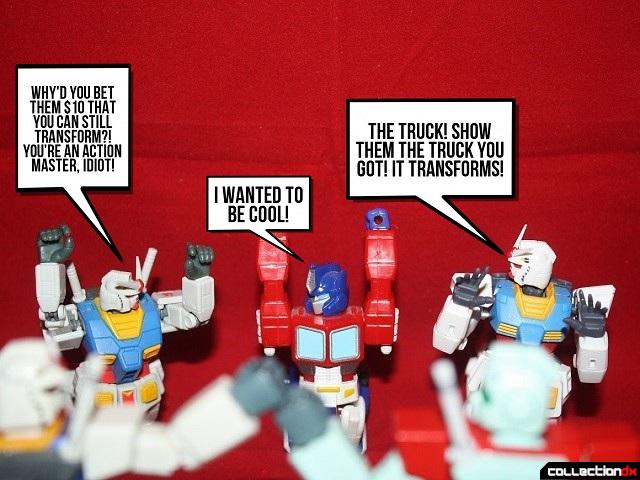 Next to its descendant, the GM, you can see the similarities and differences. The upper legs, feet, hands, beam handles, and arms are the same parts. And the feet and body comprise the metal. But everything else is different. Except for the articulation. That thankfully stayed the same and is very impressive. 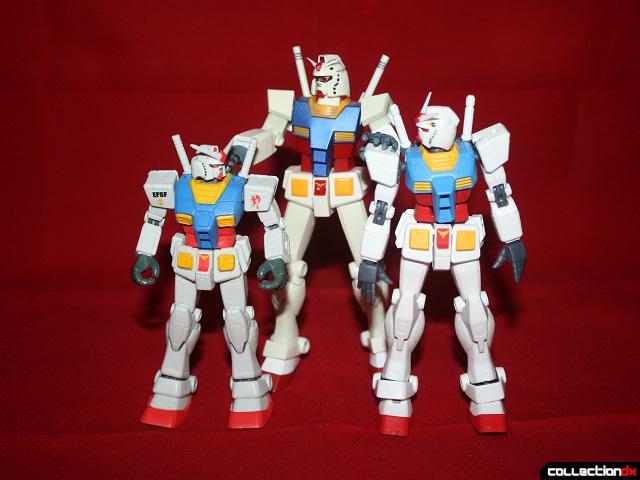 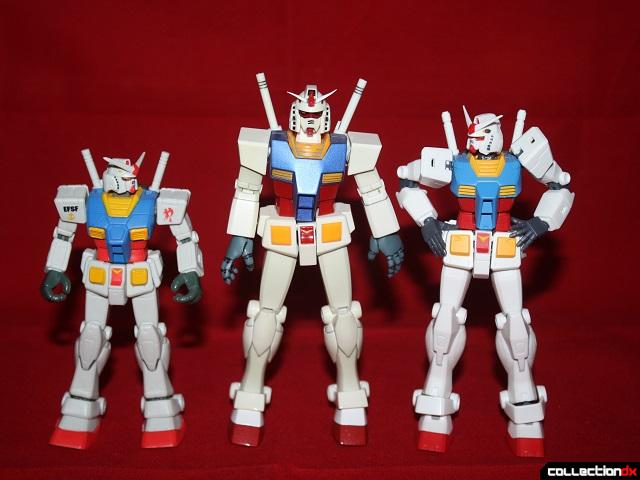 Next to the MSIA and RS, it fits right in, but the change in aesthetic details from 1979 to today is also apparent. 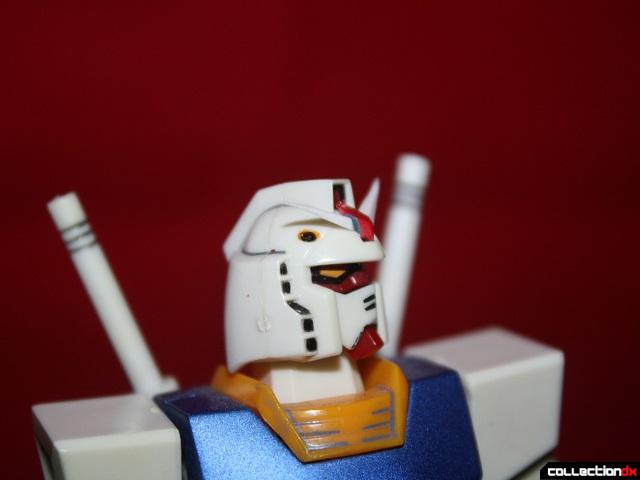 With weapons, this Gundam is only second to the RS in completeness and tied with the AE. The Vulcan cannons are present and well defined, to the point that you almost don't notice the remnants of sprue connectors on the side of the head. 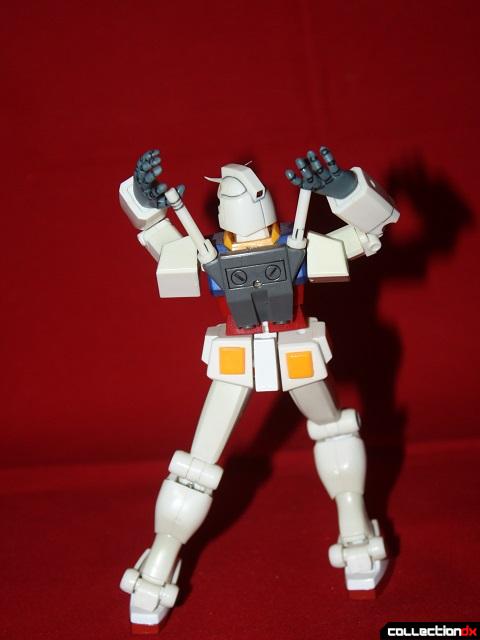 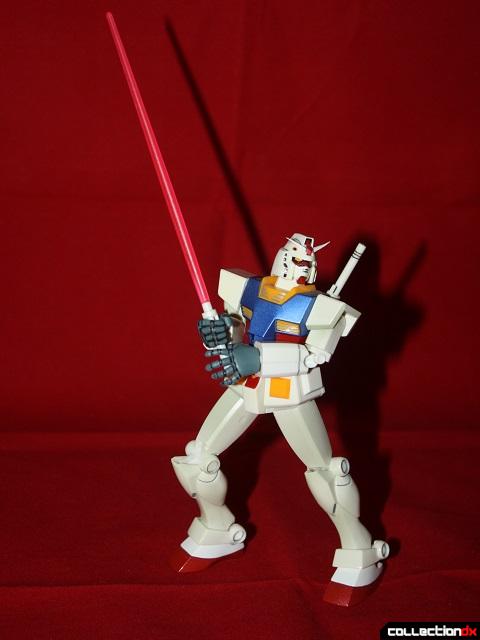 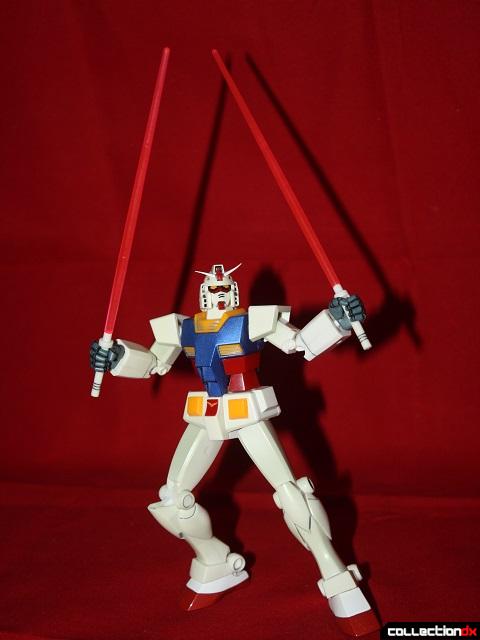 The beam grips can be plugged into their recharge rack, reached, and removed to make for one or two beam sabers. 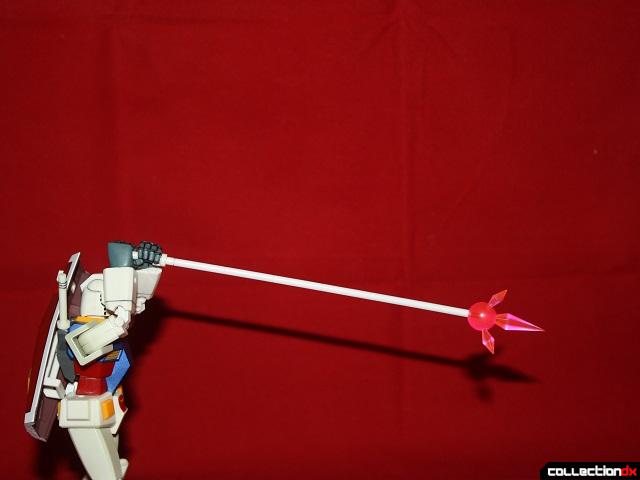 Or a nice beam javelin. 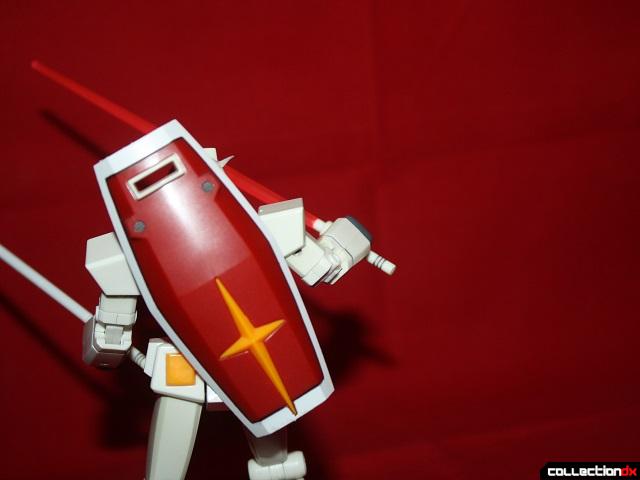 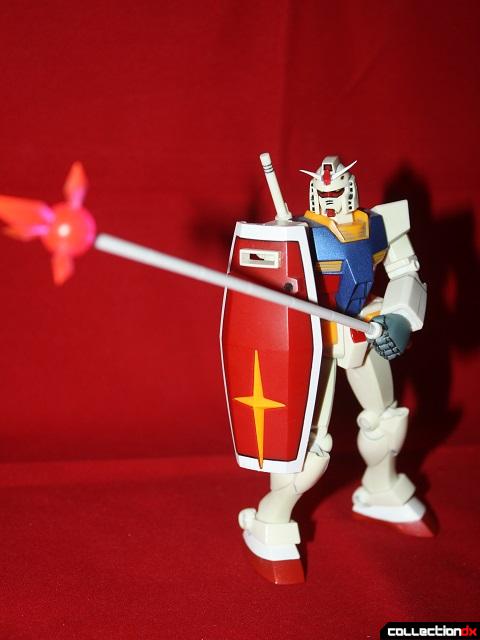 The shield (same as the GM's) can be mounted on the back, pegged into a forearm, or carried by hand. 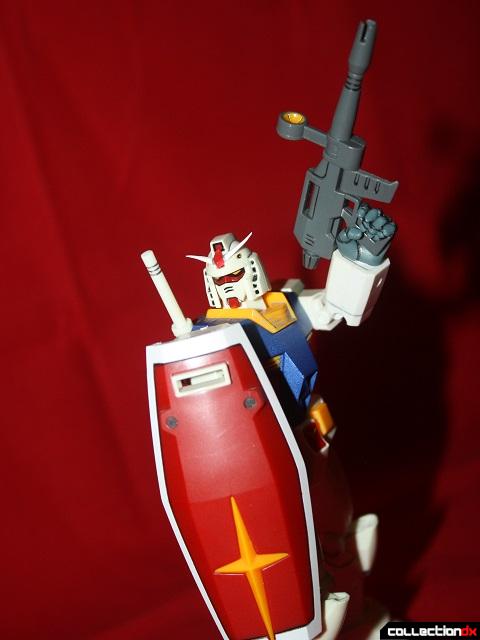 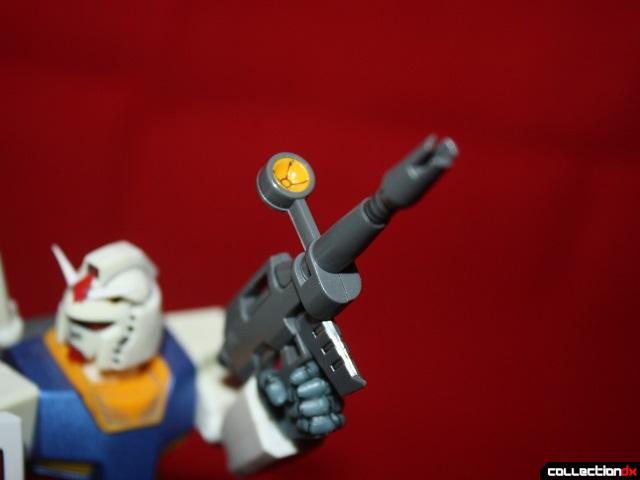 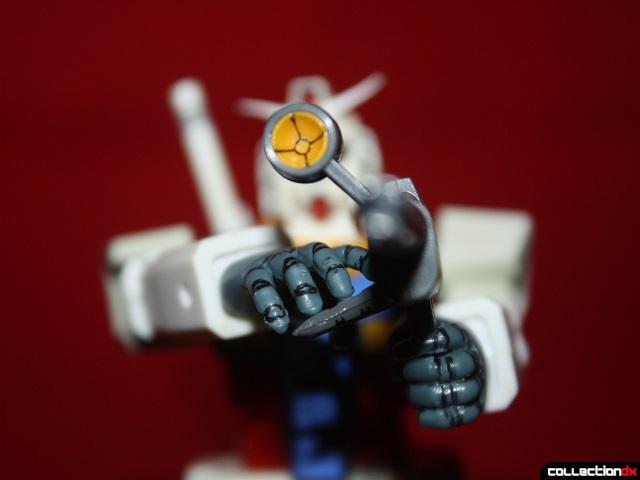 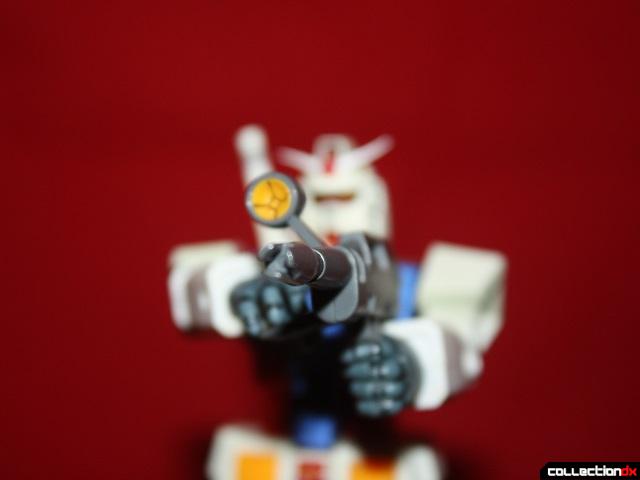 As always, the beam rifle is also on hand. It's very well detailed, and both the sight and stock swing from side to side. Combined with the Gundam's articulation, shots will be fired. But the material isn't as sturdy as I'd like. It feels too light, and there's a stress mark on the grip behind the trigger. I don't think it'll break, but still... 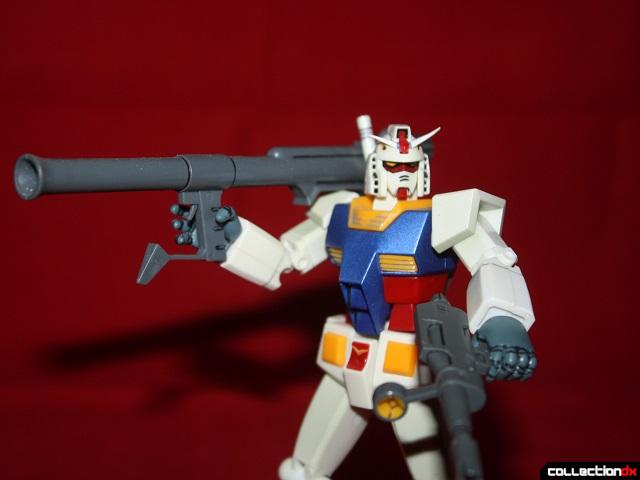 For heavier (happier?) times, there's also the hyper bazooka, which is also the same as the GM's. 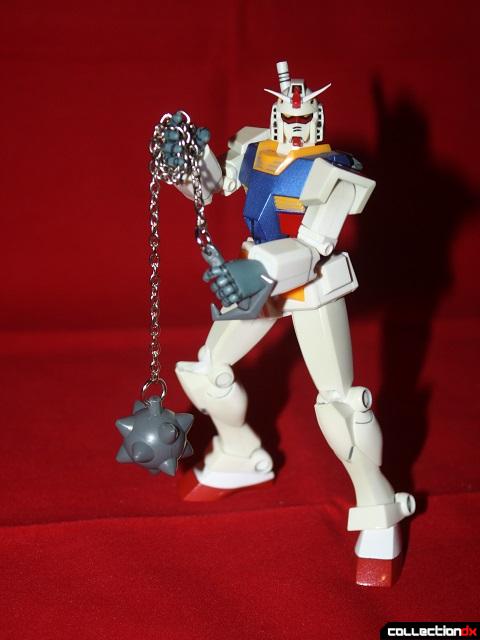 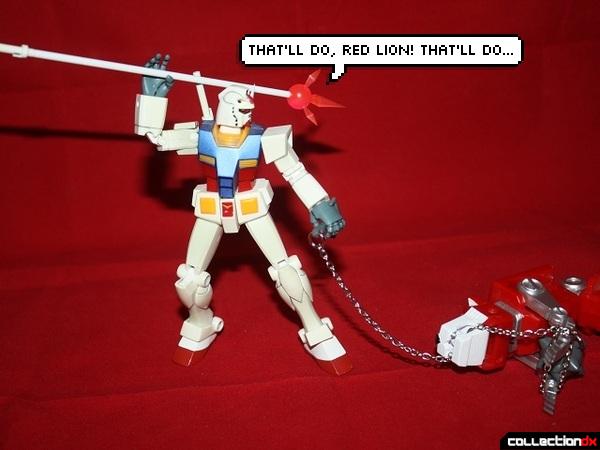 And for when things really need to be violent, there's the good ol' Gundam hammer, complete with real metal chain and anchor grip. Because nothing says brutal like a mace to the face. Or any other part of the body if we're really being honest. 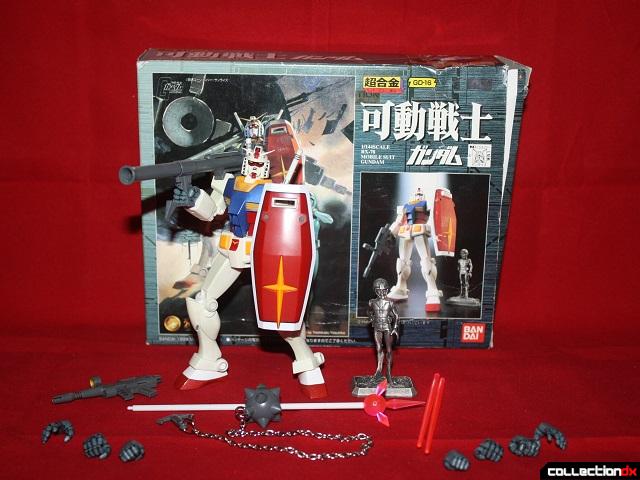 Across the board, this Gundam is fantastic. At the time I hunted this down, it was hard to come by, and I ended up paying through the nose to get it from a toy store in Italy. But with a little luck, you can find one MISB for as low as $75+. It's THE RX-78-2 as far as smaller scales go in my book. My only caution is that if you're not a completest and this isn't your favorite color scheme, shop around. They did repaint and release this in Char, Hong Kong roll-out, prototype, G3, and Titans decos, but they go for about twice as much.

I love it! It's THE most faithful representation of the 1969 anime model down to a tee, and I got it cheap as hell, $30! I've been hunting for either the RED or green ZAKU IIs ever since.