First,I need to give a very public Thank You to Matt D. over at Beantown Toys for the fantastic toy. Thanks man, this is hands down the best toy I have gotten in a long time. 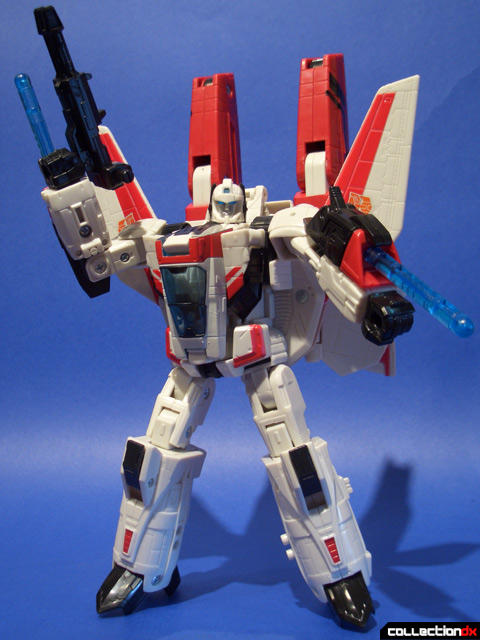 Behold the beauty of Jetfire! This is a very cool looking robot. There is no other way to describe it. I have nothing more elegant to say. Just….take it in...and ... Behold…...

For those that want to skip to the chase and check out the in-depth video review click the video below.

Still reading? OK. As you can see robot mode looks great and the figure is very poseable. However, I do have one nitpick with it's joints. I would have put the rotate feature that is on the lower knees also on the hip joints. Not a biggie but it would have been a nice touch. 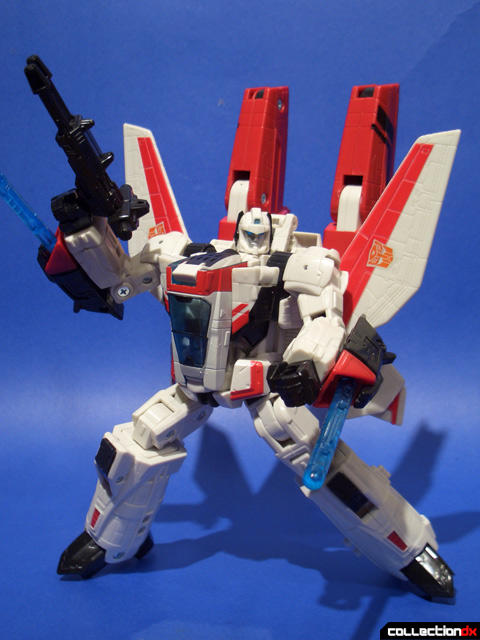 Being true to his name, Jetfire is armed to the teeth. The booster Armor has two huge Laser Cannons that flip out and flip down. Combined with the arm missiles, double-barreled gun (which splits into two) and head-mounted guns (which swivel); Jetfire can bring down the hammer on just about any Decepticon without breaking a sweat. (Did I just write that? Sounds like a bio you would find on the back of the figure.) 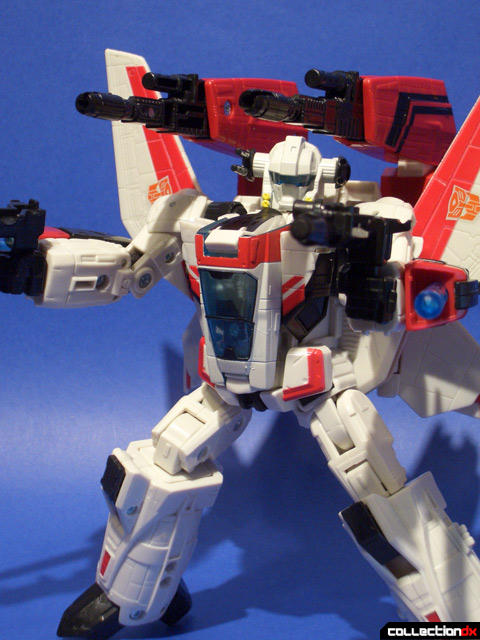 The original toy was a repressing of the Macross VF-1S Valkyrie. Because Robotech(which used an altered version of Macross) and Transformers were airing at the same time and could not use the likeness of the toy in the cartoon they renamed him Skyfire and altered his look. Never looking much like anything in jet mode, soon Skyfire faded from the Autobots roster but the toy’s legend lived on. 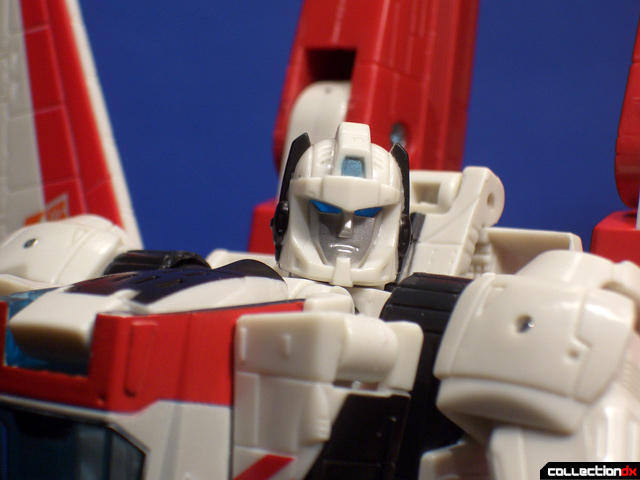 In what appears to be a nod to the toy history, the battle helmet (which looks similar to the VF-1S or a Gundam head for that matter) comes off to reveal a head very similar to the cartoon; THIS is a real nice touch. I think Jetfire looks best without the helmet, with the helmet on it makes the rest of his limbs look a bit stubby. 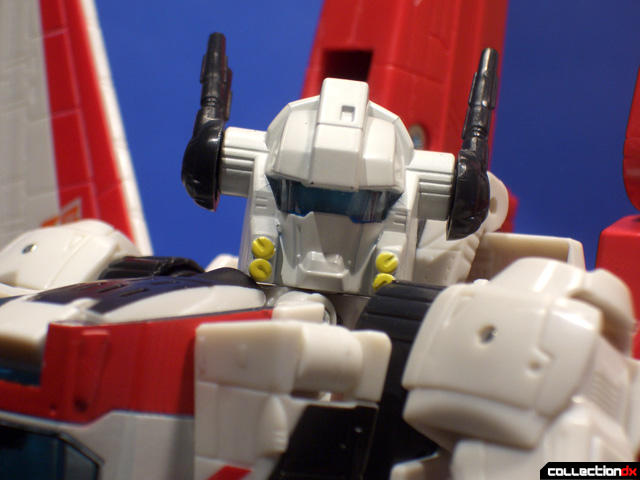 Sculpt detail is excellent with lots of panel details etched in. Paint detail is good but upon super close inspection, there is some over/under spray at points. This may not be consistent from toy to toy but I did notice it when taking photos for this review, before that I couldn’t tell. 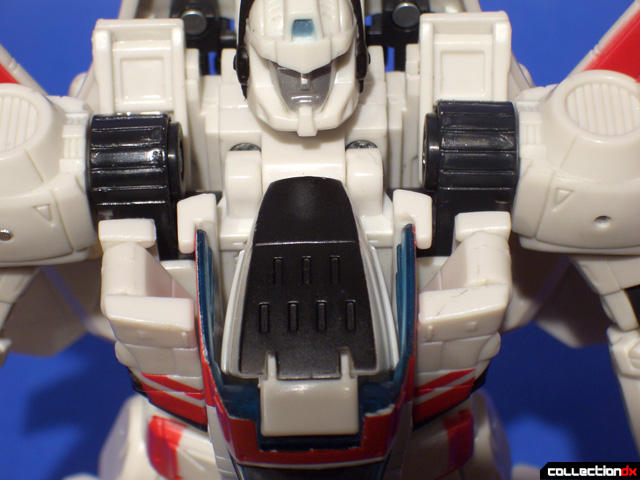 Jet mode looks excellent as well. The armor on top of the jet and on the arms is reminiscent of Macross and the original Jetfire while making a new and unique toy. It looks better than the original cartoon ever did and is just as fun to play with as the original. It’s not die-cast but still has a nice heavy solid weight to it. 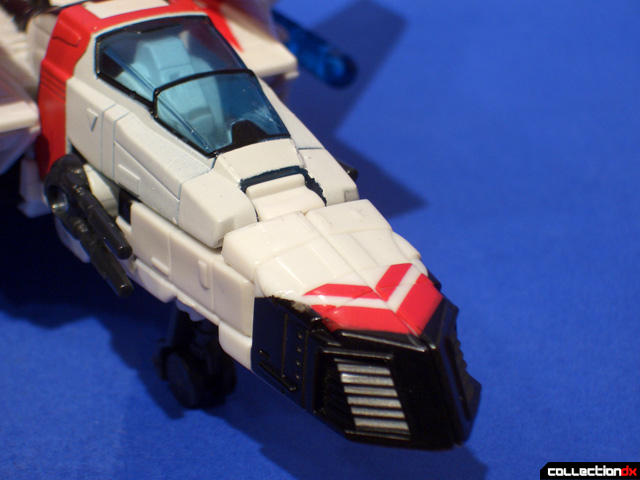 The heavy armor and heavy firepower is removable leaving Jetfire as a rather stealthy and serviceable looking jet. They really did go above and beyond in the design of this toy. 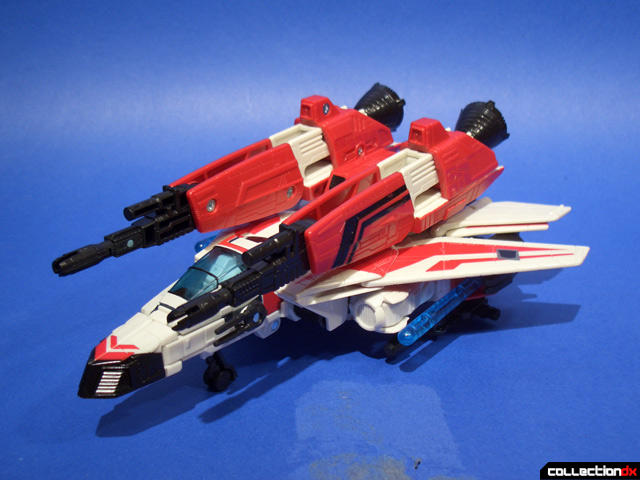 Transformation is easy and straightforward and everything clicks when moved. I can’t stress enough just how flipping cool this toy is. 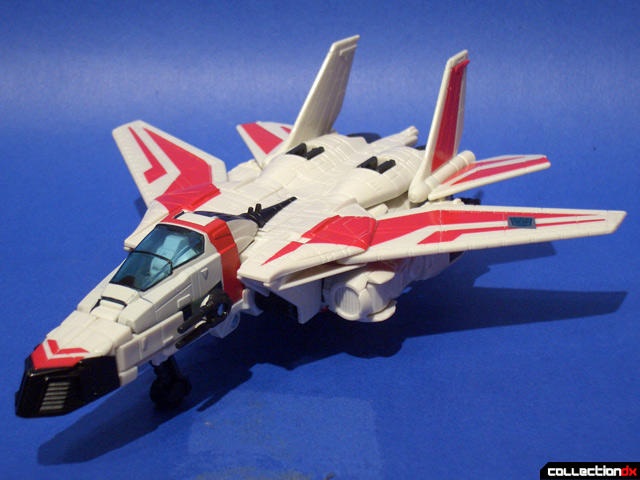 Seriously, grab one on the aftermarket because they are going bye-bye and the price will only go up. If you came this far without hitting the video link up top, be sure you do.

3 comments posted
I call him Skyfire...

I have been saying for a while now that anyone not getting in on the "classics" line is missing out on one of the best toy lines ever. Jetfire is a prime example of just how great this line is.
Hasbro has finally righted a wrong from 22 years ago. Never in my wildest dreams did I think we would get a close to G-1 anime accurate "Skyfire".
My friends and I always wondered why the cartoon Skyfire differed so much from the toy Jetfire back in 1985. We of course didn't know at the time about the legal issues between Hasbro and the Macross Valkyrie and vice versa. lol

I can't begin to tell you how awesome this toy is. I loved Skyfire as a child and owned the Jetfire toy as a child but it just wasn't the same, he didn't look anything like the cartoon. All that has changed now, I can't help but call him Skyfire.
Very poseable and articulated, G-1 homage, WEAPONS, WEAPONS and more WEAPONS! Skyfire is the bomb! If you haven't bought him already BUY HIM NOW before he is gone forever!! You won't be disappointed.

I am a HUGE fan of the Classics toy line and I was a bit skeptical of Jetfire at first. However, I came across one a few months ago and snagged it just for the heck of it. Boy, I'm glad I did because it is, in my opinion, the BEST figure in the Classics lineup and one of the best Transformer toys released in a long time. It's a great homage to both the original toy AND the animated character, which is pretty cool considering that their designs were fairly different.

The ONLY complaint I have is that the screw holding the left arm in at the shoulder broke, the head of the screw was completely sheared off when I noticed it. I was heartbroken because I hadn't seen any in stores for weeks. Thankfully I came across another one and was able to purchase this one and return the defective one in its place. (I tried the usual Hasbro replacement route, but Hasbro no longer had any Jetfires in stock.) I guess the moral of the story is, get a screwdriver and loosen up the shoulder screws in case yours breaks.