Let's just get this right out in the open. After a bit of soul searching and introspection I have come to a conclusion. I liked Avatar. Sure, it was dumb, offensive and predictable, but I had a good time and really, that's all I was looking for. The 3-D was totally rad as well.

Unfortunately, the same can't be said about the figures, which are pretty terrible. I got a bunch of them from Mattel before the movie came out, and I wasn't planning on reviewing them, but some of them are just SO BAD, even worse now that I have comparison to the characters in the movie.

Jake Sully is the main character of Avatar, and this figure is lame in both the literal and figurative sense. Jake is handicapped - for some reason he has lost the use of his legs. But Jake is a rough and tumble military guy, and he's not gonna let that keep him down. Jake's brother was slated to be part of the Avatar project where his body was matched to an artificial na'vi body in order to convince the natives to leave. Well, Jake's bro gets shot and killed, and being a genetic match, Jake fills steps into his shoes. Well, that is, if he could step. 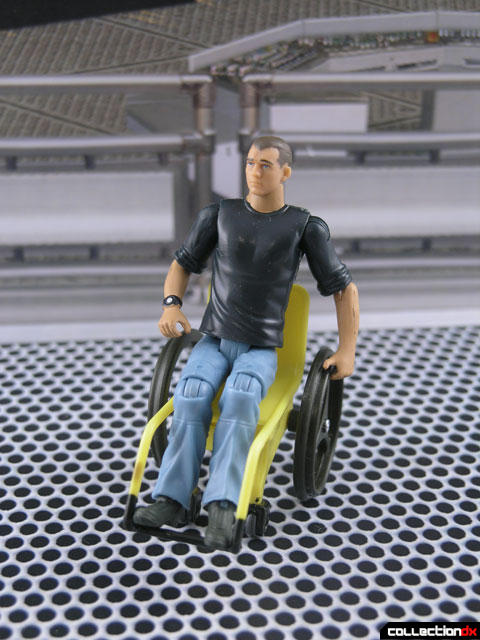 If you can say one positive thing about the Avatar toys is that the packaging is really nice. The round bubble and oddly cut backing card are unique. Packed in this toy is Jake, his wheelchair, and an i-tag stand. 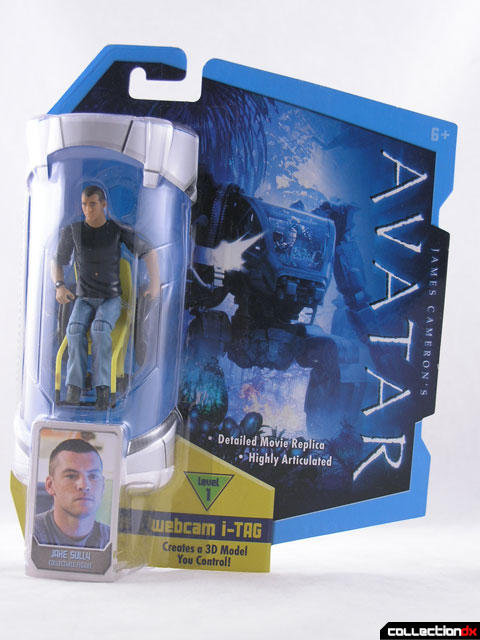 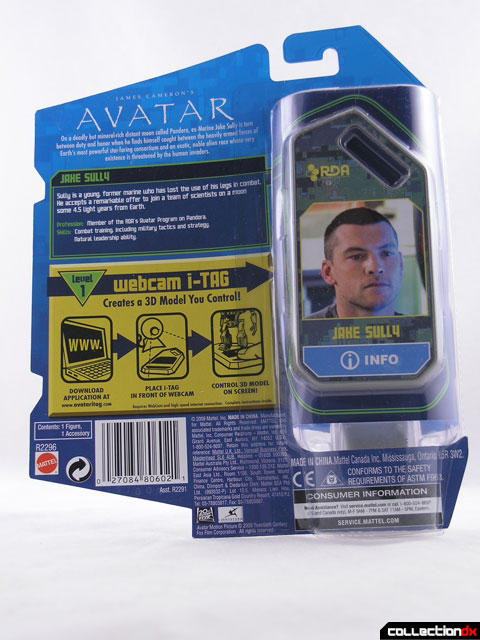 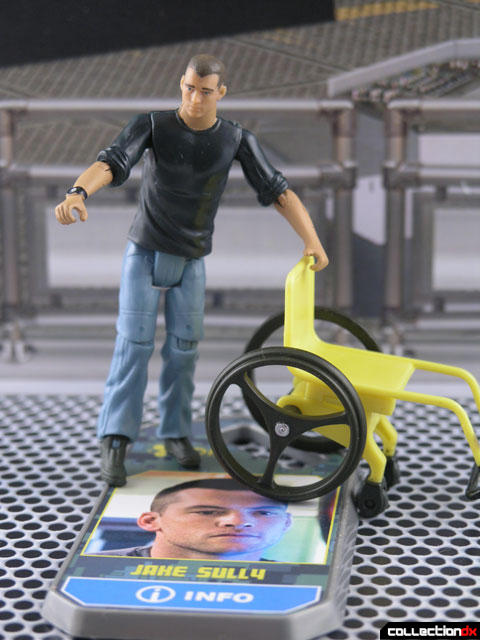 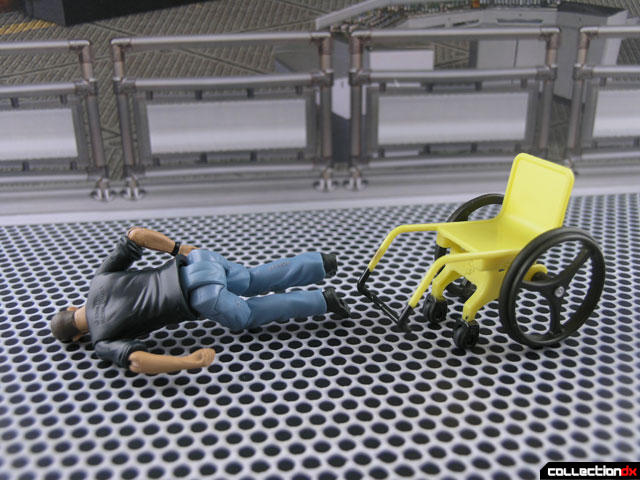 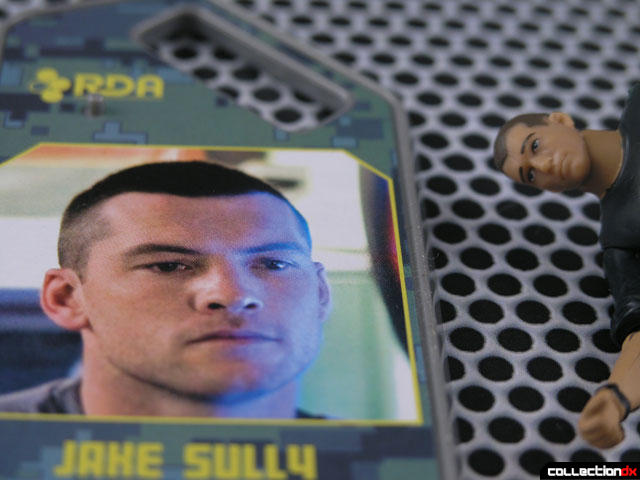 The figure is in 3 3/4 scale and fully articulated, in fact more articulated than the actual movie character. This toy can actually move his hips, knees and ankles! Oh bitter irony. 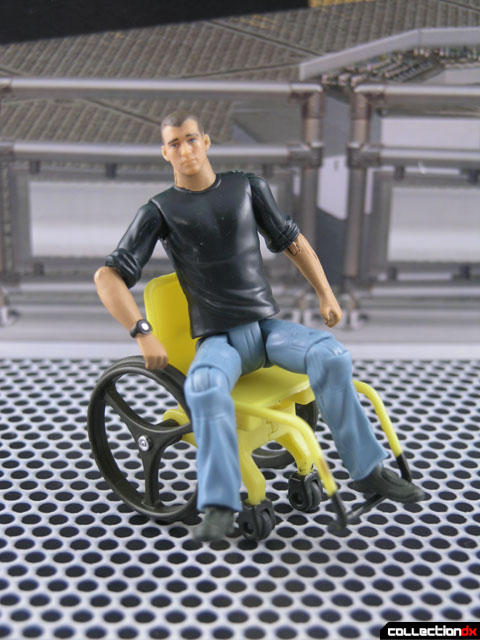 The only accessory he comes with is his wheelchair. It's actually pretty nice, even if it doesn't look anything like it does in the movie. In fact, this figure doesn't look much like his appearance in the movie at all. 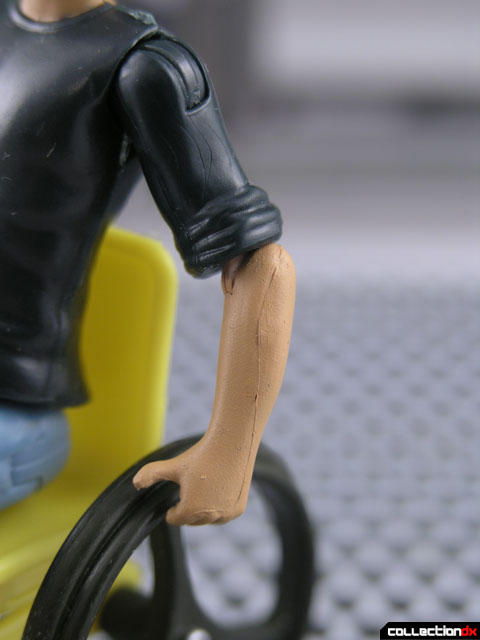 There's no grit to this figure, no stubble, no dog tags. Hell, they could have thrown in a breathing mask or something. But his bluejeans are clean, his shirt tight and neat. Almost as if he didn't spend 6 years in suspended animation while traveling through space to an alien world. 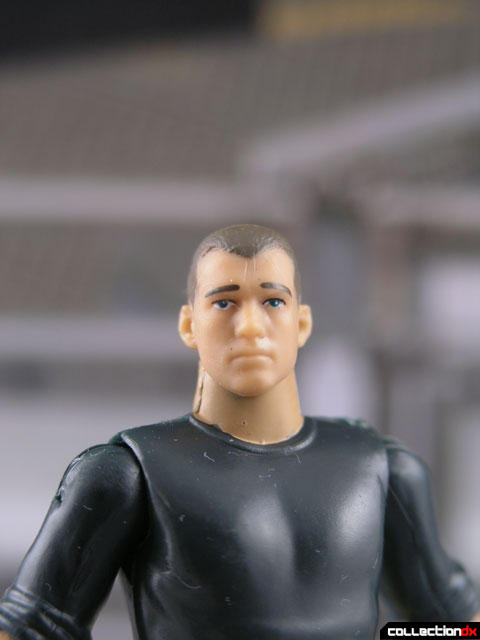 And next lets look at quality control, or the lack of any. Seam lines are atrocious, these were clearly rushed out to be in stores in time for the movie. 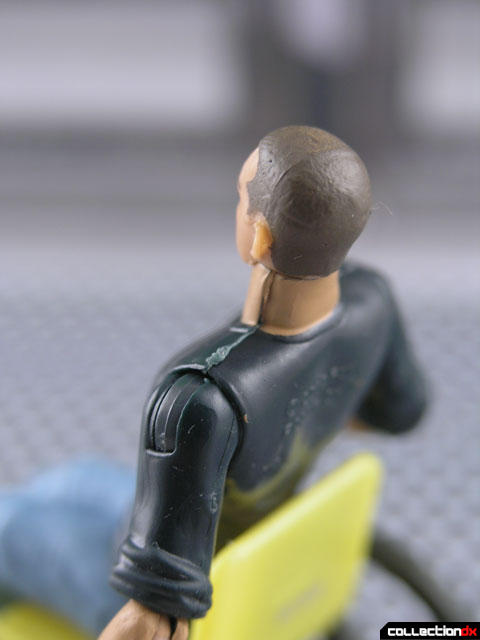 While I appreciate the fact that there aren't many toys of characters in wheelchairs, this is simply a lame toy. No effort was put into it. With a movie like Avatar, Mattel should realize that most of the sales of toys from this movie are not going to kids (who, unless are in a wheelchair, would never want this) but to adult collectors, who demand better quality out of a ten dollar action figure.

At least we get the iTag.

13 comments posted
not so certain

"With a movie like Avatar, Mattel should realize that most of the sales of toys from this movie are not going to kids"

I'm not so certain about this. Avatar had cool looking machines and cool looking aliens, and that's twice what you need to have kid-appeal.
That said, even most kid's can recognize quality, or the lack-there-of. Scully's face says it all.

Wow, that's atrocious. Really, and no offense to people in wheelchairs here, but besides maybe Professor X, who else in a wheelchair might make for a decent action figure?

That's all I got.

You ever wonder why the companies send out garbage like this for review to these types of sites? A quick glance at this site would show the writers and patrons are pretty discerning when it comes to action figures. Why would they send in a figure that wouldn't pass muster as a member of "The Corps?"
I mean,how could it increase sales to have Josh show some seamline close ups and make some jokes?

Delta is going to love this review.

Know what's crazy? They made a SECOND figure of wheelchair-bound Jake! LOL. Just saw it the other night. It's him looking a bit more shaggy (long hair). I didn't take a closer look to see if there were other differences.

I thought the movie was fantastic. A great sci-fi romp.

It looks exactly like the Shia LeBouff figure that came with Human Alliance Bumblebee... weird. That and, awful. The build quality looks embarrassing. Great review though!

He forgot to step out of the Camaro before it transformed to robot mode,hence the wheelchair.

This review is how the Col. Miles Quaritch review should have read as well.

Not worth the plastic chips used to melt him out ~ GARBAGE

Let me know when they're going to make a gyro stabilized R/C Jake Sully.

I've been collecting these things since I saw the film, and I can assure you that the quality varies greatly from figure to figure. For instance, this particular specimen is whack, but I was able to find one that looks a lot cleaner and with better detailing. In any case, they're clunky toys that can take some punishment, not collectors items.

Now hear this; I picked up the Leonopteryx (hooray! Wayne Barlow toys!) opened it up and was overpowered by the smell of SOLVENT! (boo! China doesn't give a s**t!) I'm not kidding, I dragged a finger across it and removed some paint. The stuff clearly wasn't mixed properly, and would be a bad scene in the hands of small child. It dried after three days, and was the only such instance but worth mentioning. While you struggle to build these things for you kids, be on the look out for this type of insanity.

So far Avatar has made $3,137,588. So a respectable toy company will be remaking these in no time, maybe soon enough. Get ready for your bioluminescence archaeopteryx from NECA or McFarlane Toys. Yes, I really did like this movie a lot. Amazing how well it's done. Cameron you might be a d*ck but you make a hell of a movie!