Since Iron Man 2 released, there have been a lot of new Iron Man figures.  As something of a self-proclaimed Iron Man expert, and owner of the majority of Iron Man figures released, I was curious to see how the new Revoltech version stacked up.  We’re going to get nitpicky. 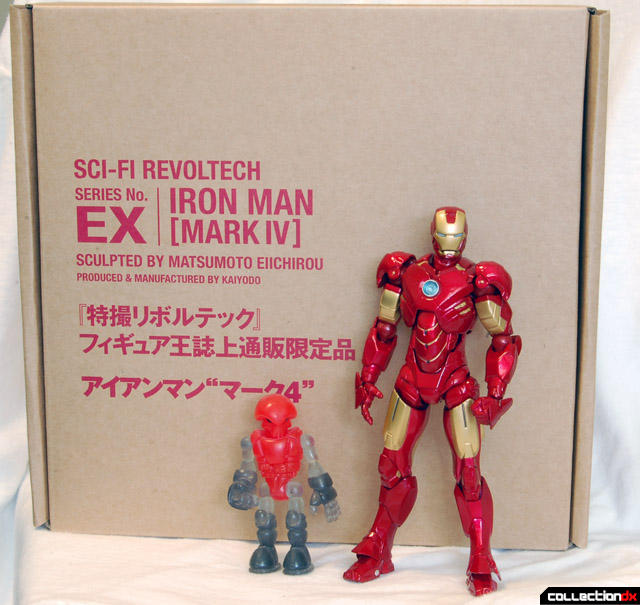 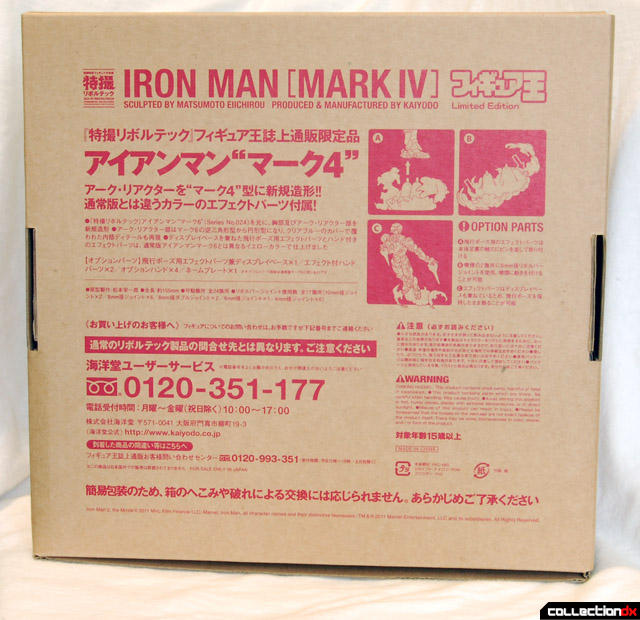 I have not gotten a new Revoltech figure in a long time, so the funky printed brown box for this Sci-Fi Revoltech release Iron Man Mk IV was something of a surprise.  The printing is clean and the presentation is pretty classy. 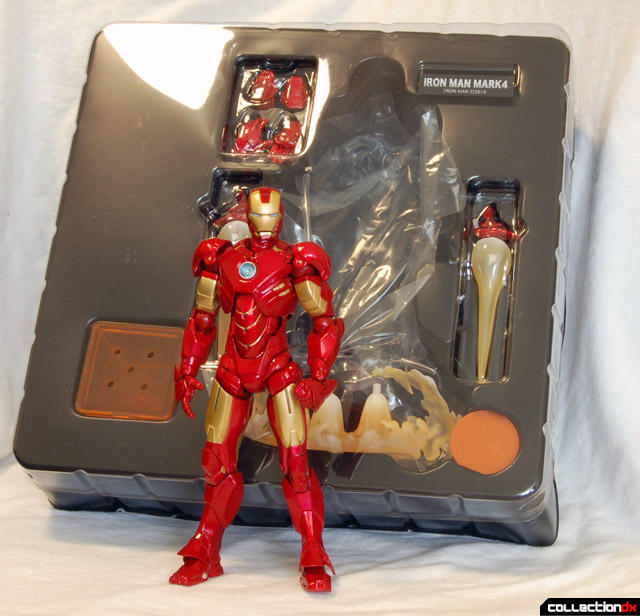 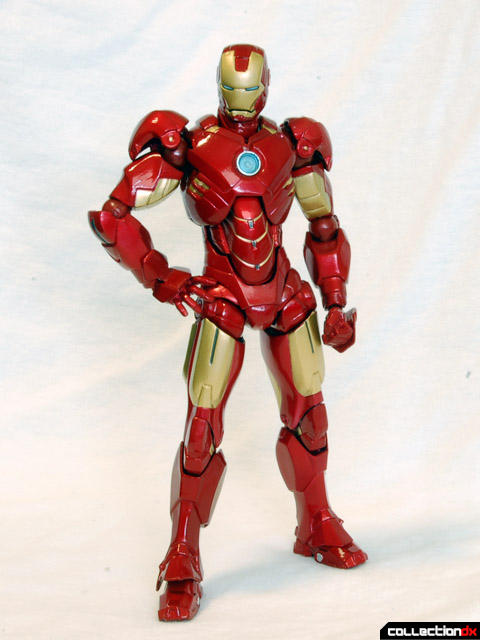 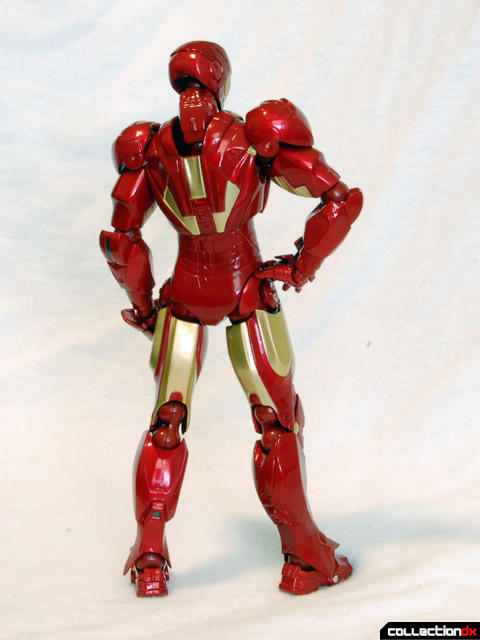 Iron Man stands around six inches tall.  The sculpt is sharp, but has some weirdness that we will get to in a bit.  The paintwork is rich and glossy, and almost flawless, except for a ding right on the chin.  Looking in some of the peg-holes reveals that the red color is clear red painted over silver, giving a fantastic metallic red, just like on the newer Hot Toys versions. 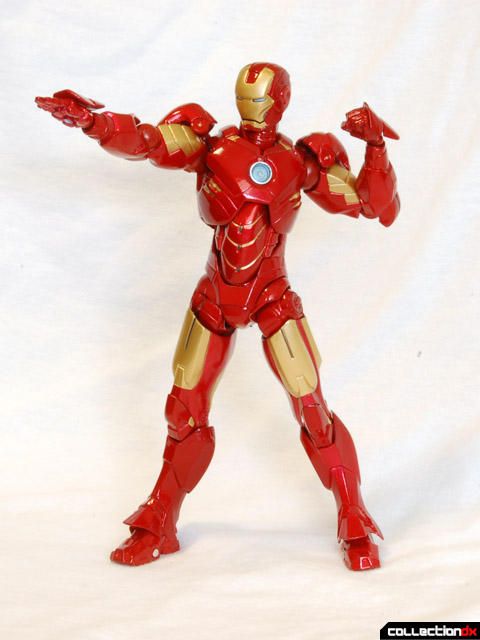 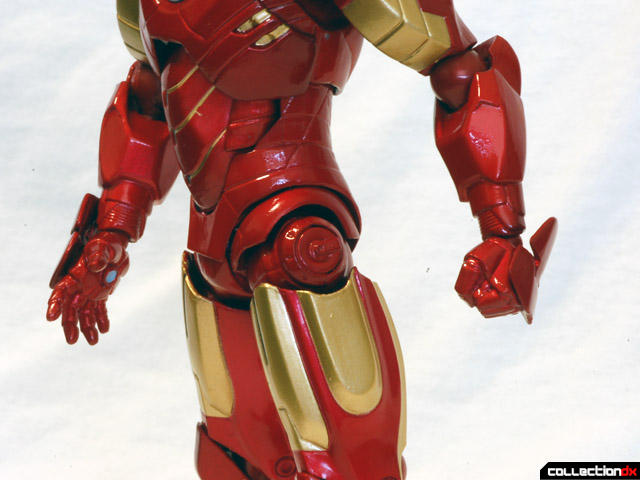 As a Revoltech release, we are more here for articulation over sculpt, and we get tons of that.  Iron Man features revolver joints at the shoulders, elbows, wrists, knee-pads, mid-ab, ankles, and two in the neck, with double-revolver joints in the knees.  The hips feature multi-part traditional articulation that is really well done and results in more than enough motion while looking very clean.  The hips rotate and angle out, and a hip armor piece floats between the hips and the pelvis, keeping the gaps around the hip in all but the most extreme poses to a minimum. 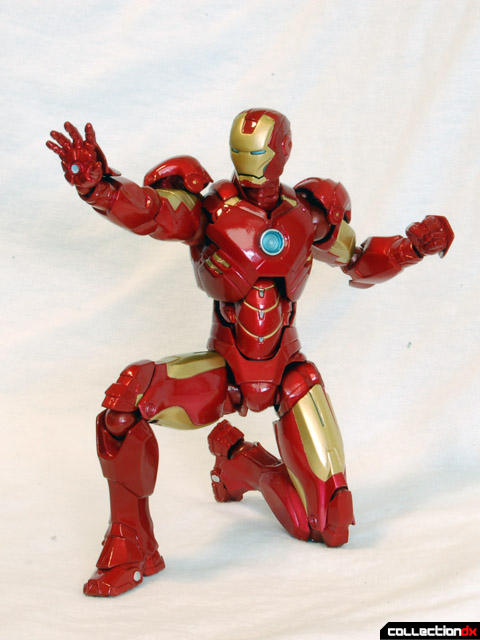 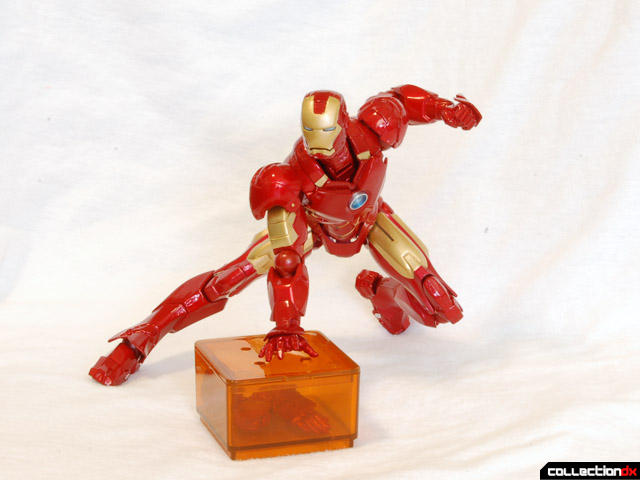 The articulation is well implemented, and Iron Man can kneel, and do one of the best ‘poster pose’ of any Iron Man release. 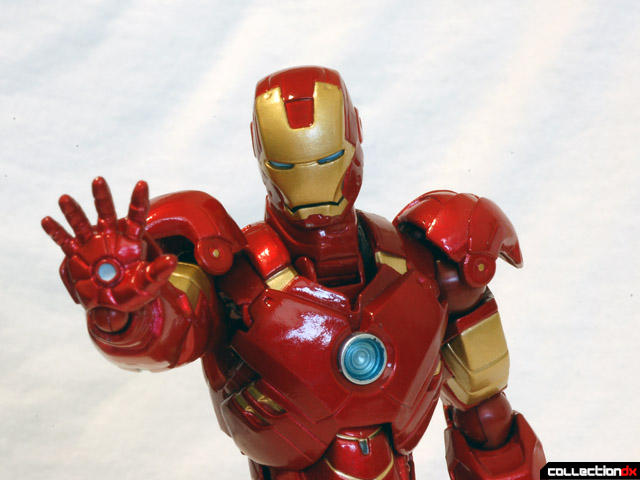 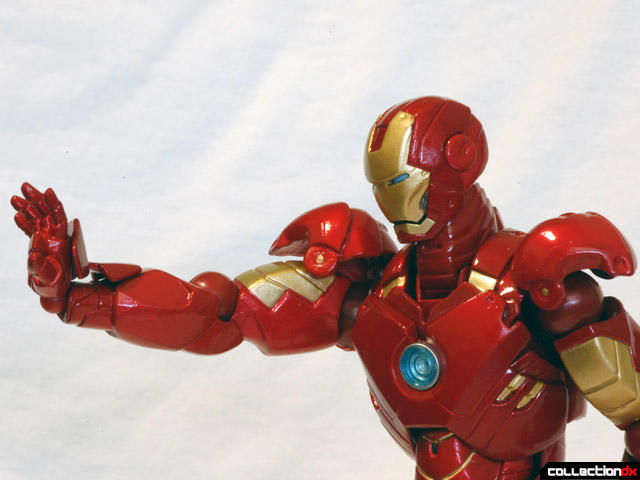 The regular hands swap via a single provided pair of mini-revolver joints.  One of the defining, and hardest to implement features of the movie armor is the hand armor that extends back to cover the wrists.  Different manufacturers have represented the armor panels in different ways.  On the Hasbro releases, the plates are part of the hands, but do not extend back enough.  Hot Toys solved this by making the armor plate part of the arm that rotated around the wrist, and were hinged to move along with the hands.  Kaiyodo has opted to include an armor plate on each hand, with a flexible flap to cover the wrists. 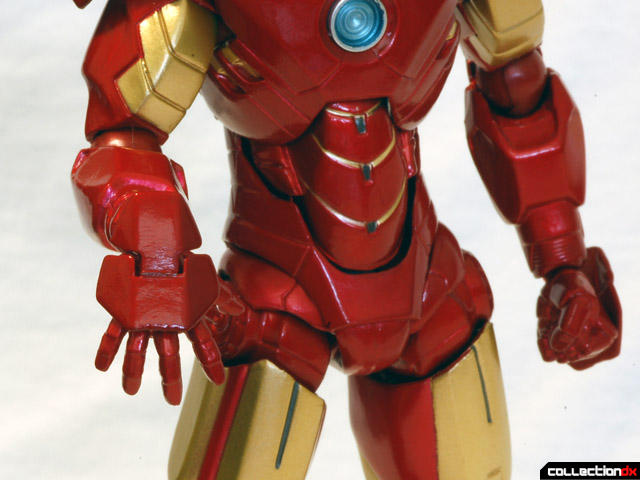 These plates look good, but I can already see stress marks and a split in the paint on one of the plates.  Time will tell how well these hold up. 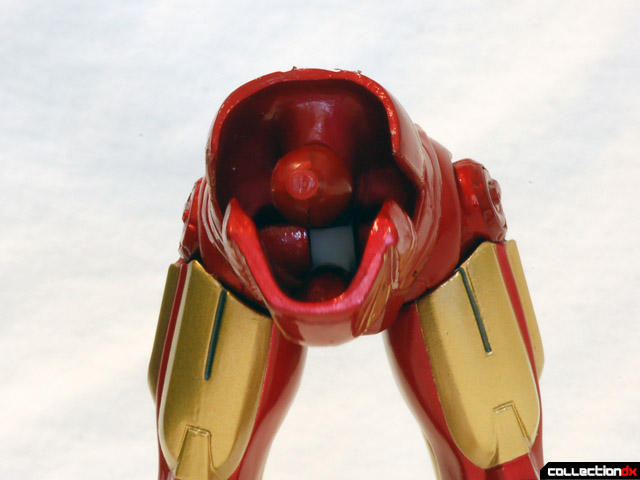 The torso is well-engineered, with multiple parts for a clean finish even in extreme poses.  The chest and waist are held together by a revolver joint, and then the ab armor segment floats on a soft plastic connector, so it moves to match any angle you pose the torso. 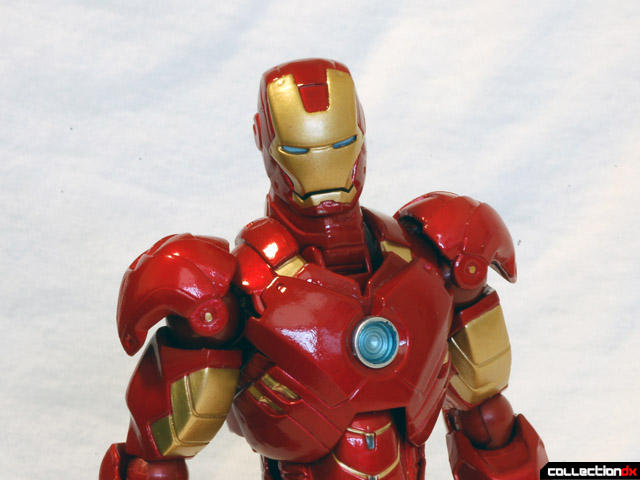 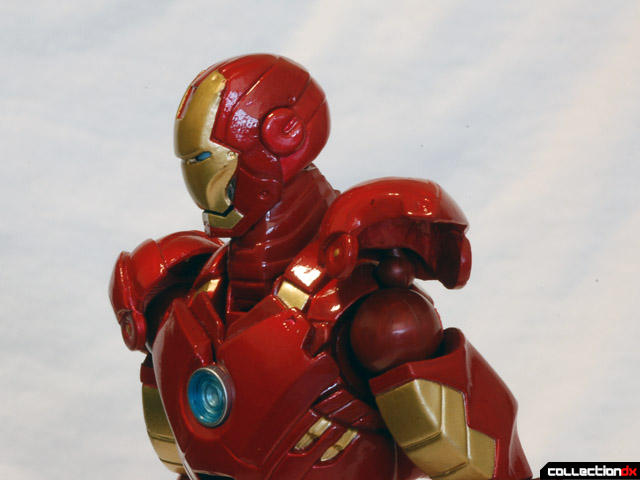 The shoulder armor is also well done.  Kaiyodo has come up with a simple and elegant solution for what is often the biggest stumbling block for modern Iron Man figures, now that most of the suits have shoulder pads again.  The shoulders are attached to the torso by a small revolver joint at a weird, Revoltech-ey angle, allowing them to sit correctly in almost any pose. 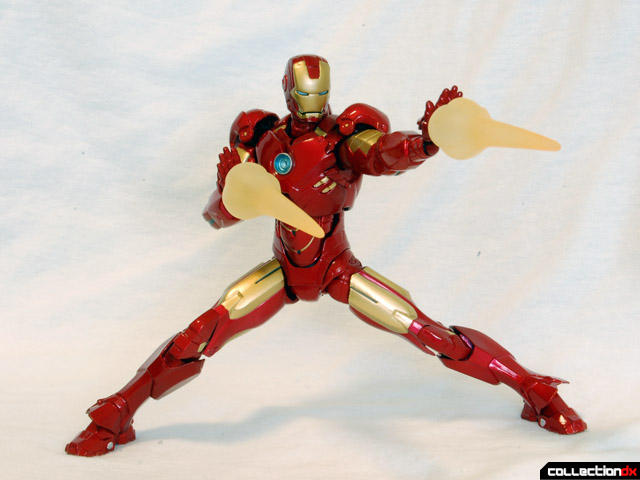 The repulsor blast effect parts feature a frosted clear yellow finish, and look great.  Having a posed set of hands with the wrist plate already bent back should keep most people from over-stressing the posable hand wrist-flaps.  The only thing I do not like is that the firing hands are not posed at a 90º angle to the arms, which throw off the firing poses from some angles.  It’s a minor gripe, and the photos show that you can still do some great things with this figure. 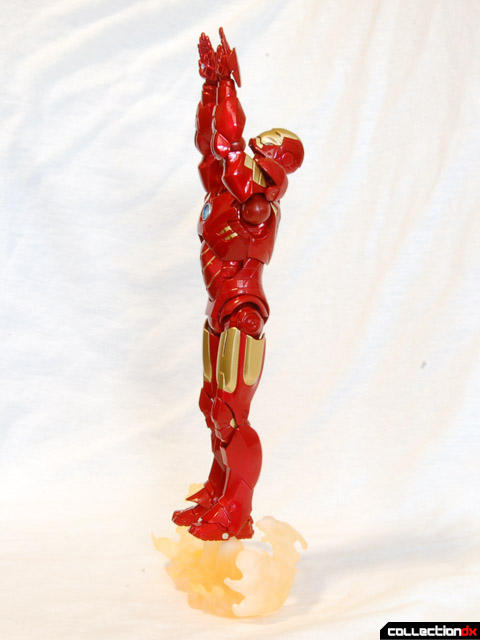 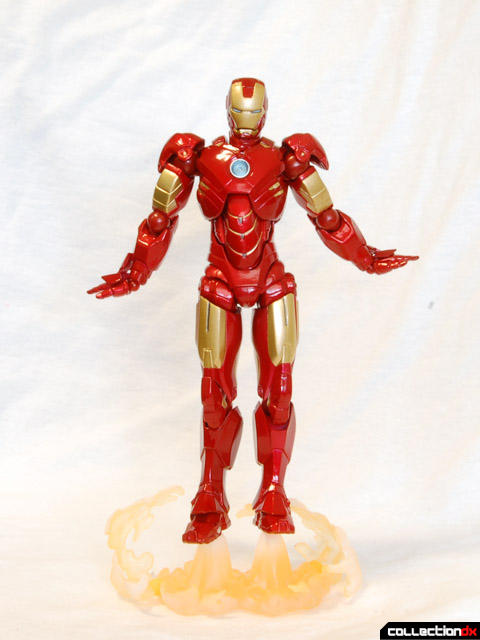 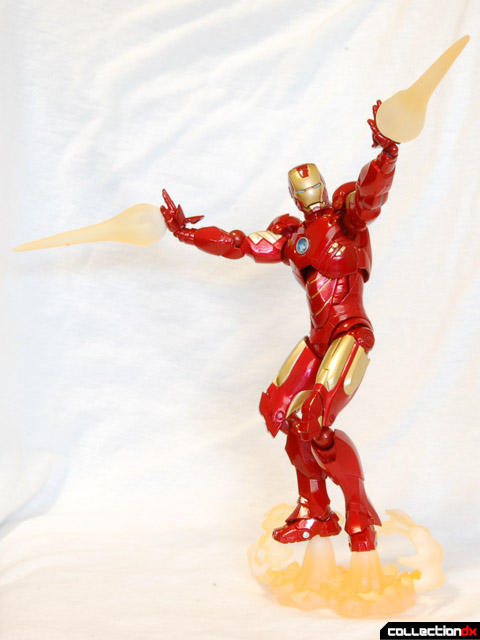 The boot-jet effect part has the same frosted clear yellow finish, and the two wrap-around blasts are actually also articulated on revolver joints.  Iron Man securely pegs onto the stand, and the effect part is pretty convincing.  I do wish, however, that the footprint of the base was a bit larger, so you could get some more extreme flight poses without it tipping over. 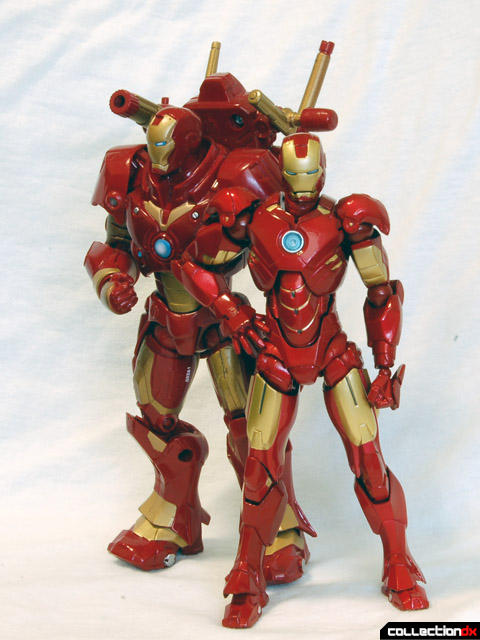 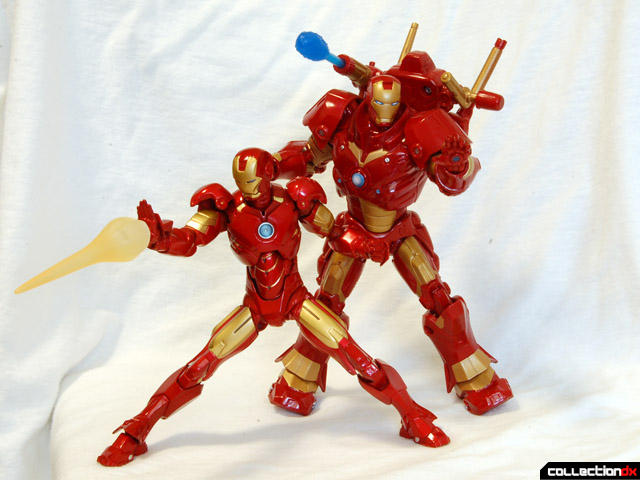 Kaiyodo’s Iron Man moves better than any other Iron Man figure on the market, and is superior to the majority of the Hasbro releases, but there are some weird aspects of the sculpt that keep me from loving it.  Shown next to one of Hasbro’s six inch releases allows us to compare the good and the bad.  The paint and sculpt finish are both far superior on the Revoltech figure, with no visible seam lines, and that awesome glossy, fully painted finish. 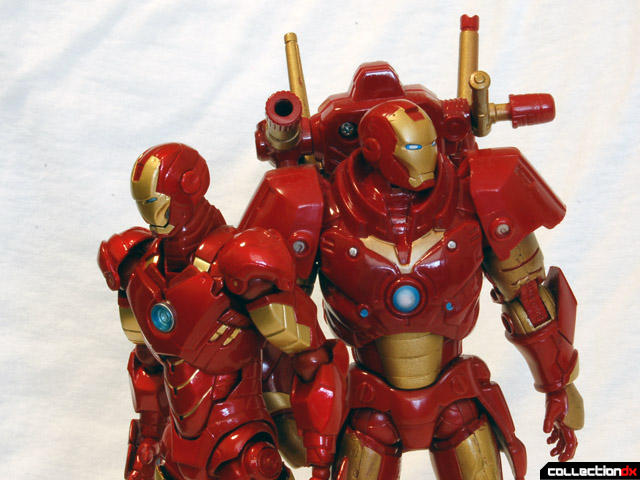 Putting the two figures side by side also reveals my least favorite part of the Revoltech version: the head sculpt.  Simply put, there is something wrong with Kaiyodo’s helmet sculpt… it is too square, and flat in all the wrong places.  The eyes are a little squinty, and the shape of the mask and jawline are wonky.  Hasbro’s finish and build quality are worse, but the helmet sculpt is far superior, and looks like something a man’s head would actually fit in. 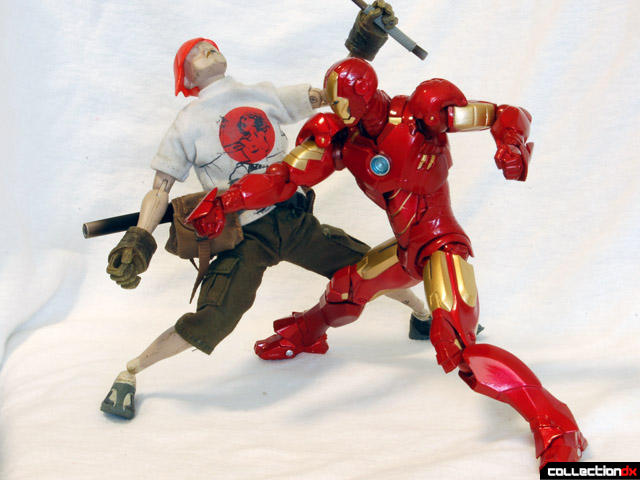 The second thing I do not like is the kneepads.  This not-too-extreme pose with another six inch figure illustrates my problem with them.  The knees feature a double-revolver joint, and the kneepads are attached to the upper leg by a small revolver in a similar way to how the shoulderpads work.  The problem is, because the kneepads are attached to the upper leg instead of the shin, you get an ugly gap that shows off way too much of the knee revolver joint, and is inaccurate to how the knees on the movie suit work.  Every other movie suit figure makes the kneepad an extension of the shin, or accurately makes the armor plate part of the knee articulation unit, either of which would look better than Kaiyodo’s solution. 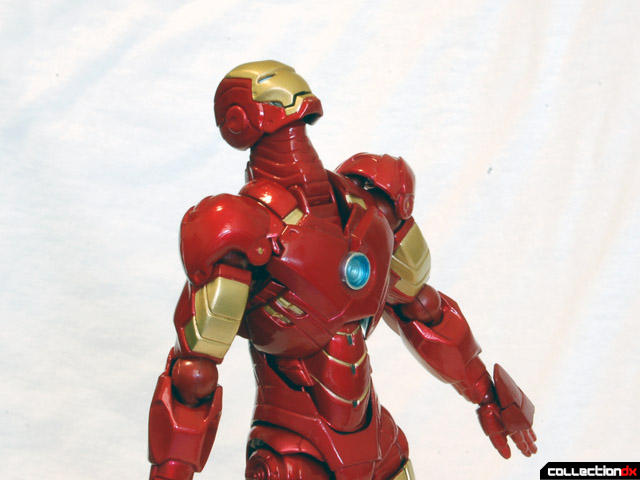 The third thing is minor, and not really a problem.  Because of how the neck is jointed, it can extend inhumanely long.  Bizarre. 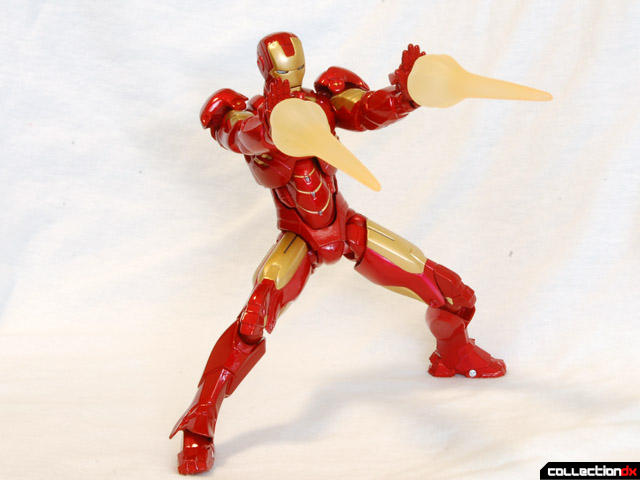 Despite some weird choices and minor sculpt issues, the Revoltech version of Iron Man is well made, and does exactly what it sets out to do.  It makes a great desk figure, and is a blast to pose.  It is not the best looking rendition of the movie suit, but is more fun than the Hasbro six inch releases.  You can pick up a Revoltech Iron Man from for $58, which is… kind of a lot.  If you were only going to pick up one six inch Iron Man figure, however, the well done articulation and added effect parts make for a nice complete package.  The paint, sculpt, and overall finish are far above anything you could pick up for less right now, so if that matters to you, this is the one to get. I like what it brings to the table, and think it stands out amongst the pantheon of non-Hot Toys Iron Man releases.

good review and I agree the head does look weird. I am glad you touched on the kneepad problem. This is exactly why I am not a big fan of revolvtech figures. I have the same problem with my Getter and Neo Getter. Yes they are super posable but it is like the makers are trying to show off the joints by exposing them in every "extreme" pose. It is just a plastic joint, I am not that impressed, Kaiyodo. Even in the promotional material provided with each revolvtech figure they sell the joints like they are the greatest technology ever. I like the effect pieces though. Once again good review. i just don't think I will spend $50.00 plus shipping for this one.

I also got a Revoltech Iron Man figure (mark VI). The painting and finish are way superior to any of Hasbro's toys so far and I really like it.

I was searching for a decent toy representation of Iron Man for a while and every Hasbro figure has shown the same problems over and over again. The finish of all of them is unrefined and the painted details are absolutely horrible, with very thin coverage, scratched parts and lots of badly placed details.

The Revoltech toys are the best option one can find in this size (The Hot Toys version it's awesome, but also it's price).

This particular figure is a magazine exclusive, which explains the higher price (and also the cardboard box instead of a standard Revoltech window box)

Thanks for the info, RB. Like I said, I haven't really kept up on how Revoltech stuff works lately. It looks like the regular release MkVI was about $50 on Angolz, so anyone looking for one should keep that in mind,

I just received this figure and the mark 6 friday they're really nice the only things I was kinda ehh about was the neck which sees kinda weird if my positioned forward and that the torso seems a bit flat in the back. but looking past those they're really nice. but I will say the war machine blows both away in sculpt, and everything it is flawless!!!!

If you plan on picking up just one iron man revoltech pick up the war machine you will so not be disappointed!!!