Iron Man 2 smashed into theaters in May of 2010, accompanied by an absolute wealth of merchandise, books, and most importantly, toys! Taking place 6 months after the end of the first film, Iron Man 2 sees Tony Stark upping the stakes and dealing with his new role in the world. The film features many more and varied mechanical designs, including three suits of Iron Man armor throughout the film, and the fearsome War Machine. The Iron Man Mk IV is the suit built at some point after the first Iron Man film to replace the relatively basic Mk III. It appears to be slightly heftier and more streamlined, with an increased emphasis on protection and offensive capabilities. It is also an exclusive figure for the DST line to Border’s Book Stores.

Diamond Select Toys is a sub-company of Diamond Comic Distributors, the primary distributor of comic books in North America. DST has produced many specialty Marvel figures in the past, with varying degrees of quality. Fortunately for us, the Iron Man 2 figures appear to be something special. 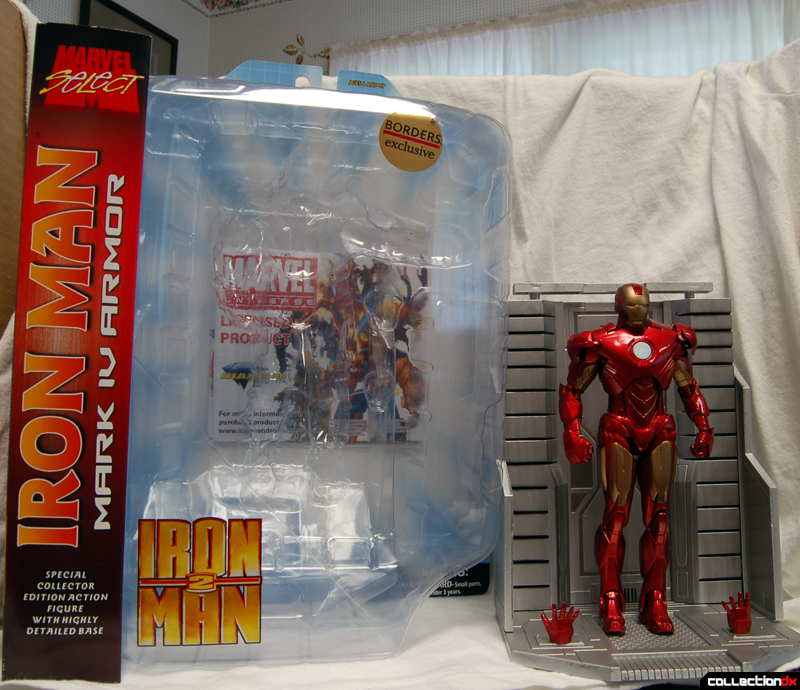 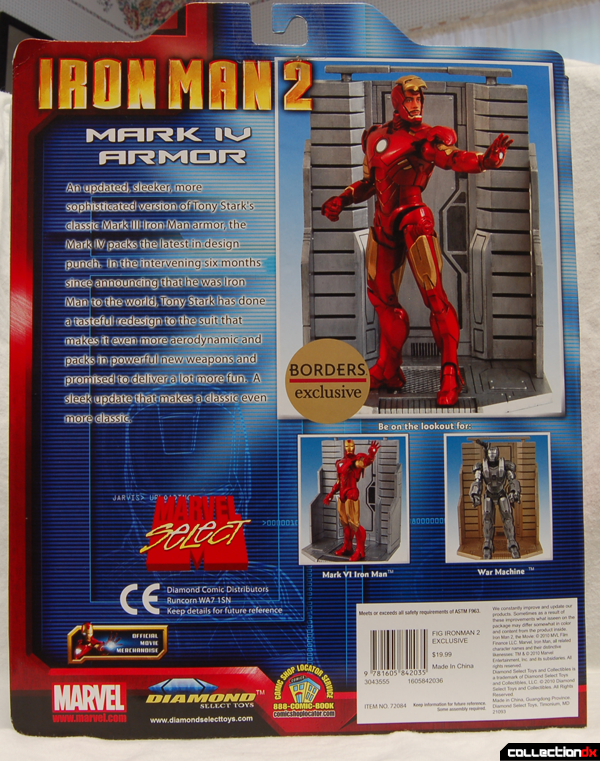 The box is probably the weakest part of this toy: it is just massive, and mostly empty. The box features some nicely printed artwork and photos of the toy, but also consists of primarily empty space inside a giant vacuum-formed plastic shell. Removing the figure from the box is thankfully easy, with only a couple of the dreaded twisty-ties. The contents of the box include the figure, removable mask, one set of fists and one set of open hands, and a two-part display stand molded in lightweight ABS. 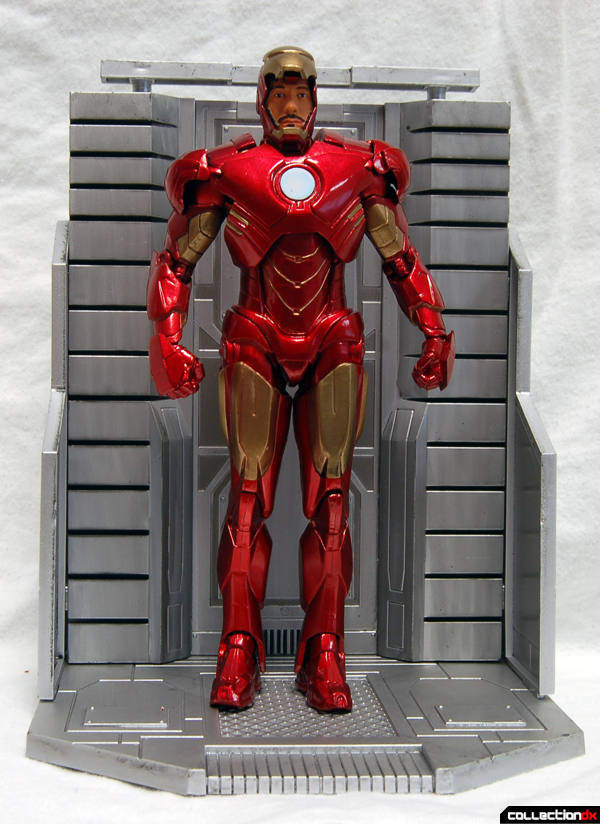 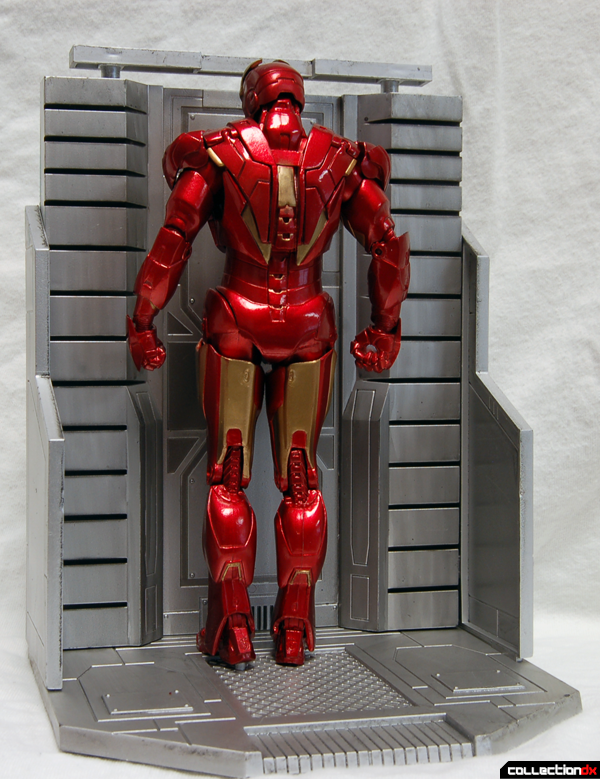 The DST figures are slightly larger than the typical six-inch figures produced by Toy Biz or Hasbro. Iron Man stands around eight inches tall, and is surprisingly hefty feeling. The figure is made of very high-quality feeling PVC, and is fully painted pretty sharply. One unfortunate misstep with the DST Iron Man figures is that the eyes were not painted on the mask for some reason. I assume this is a factory error, but appears to be the same on all of the Iron Man figures. Of note is that the War Machine figure, which I will review next, has the mask eyes properly painted. 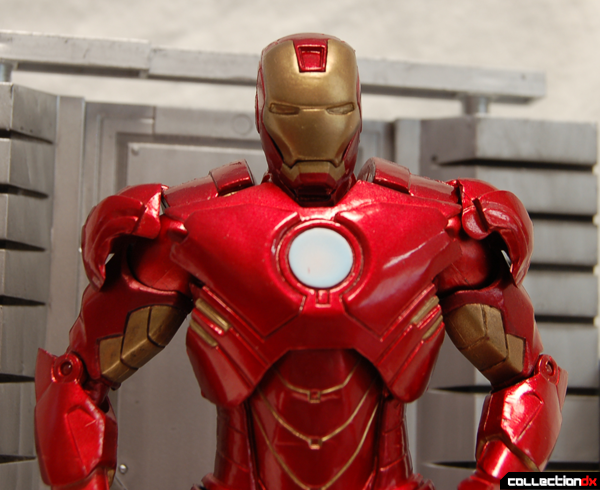 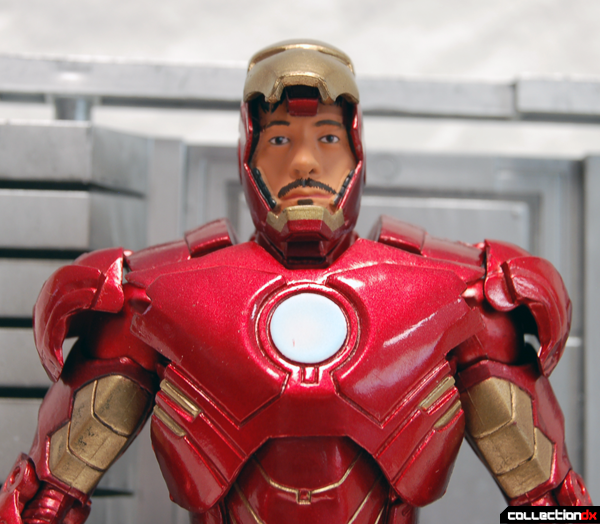 The head features a removable mask, with a pretty solid Robert Downey Jr. likeness inside. The mask pegs into two holes on the top of the head, or the brow ridge, and the face holes are well-hidden by the elevated mask, to avoid any ugliness. The mask also matches the proper shapes and contours of the rest of the helmet well, providing an almost seamless look. The hands are on ball joints, and both come off for swapping easy enough and stay on nice and tight when posing. 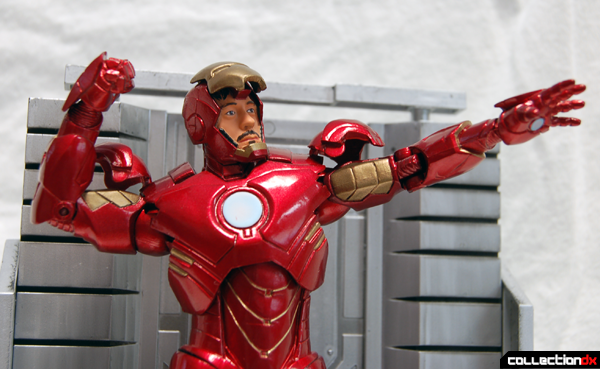 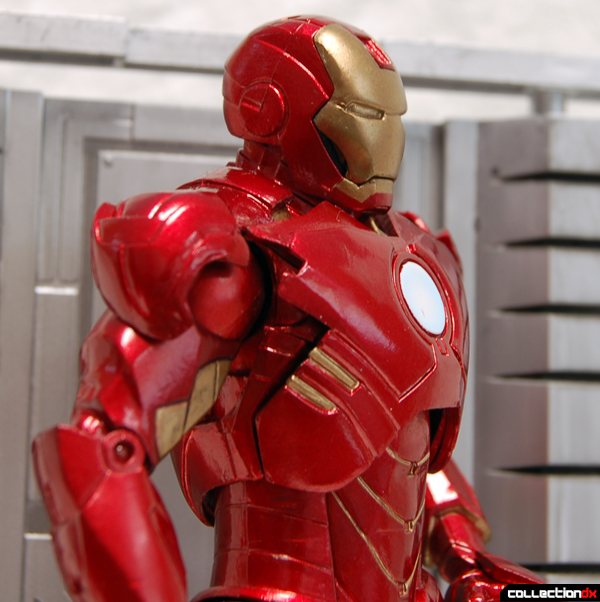 The sculpt on this Iron Man figure really stands out to me as the best looking figure we’ll get besides the Hot Toys 1/6 scale Movie Masterpiece figures. The problem with many Iron Man figures is that the sculpts do not accurately reflect the fact that Iron Man is a suit of armor surrounding a full-sized and reasonably well-built adult. The DST figure, however, has managed to avoid this problem, and the figure looks solid, bulky in all the right places, and powerful. This is the Iron Man you saw on screen, and appears to be quite accurate, both in detail and poise. 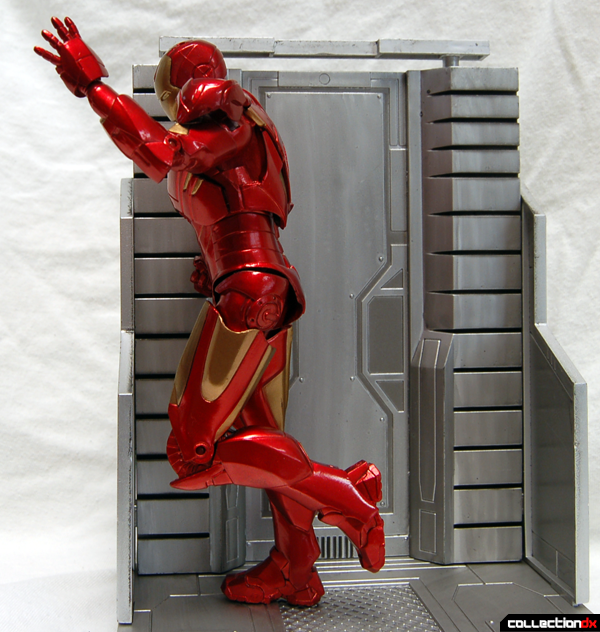 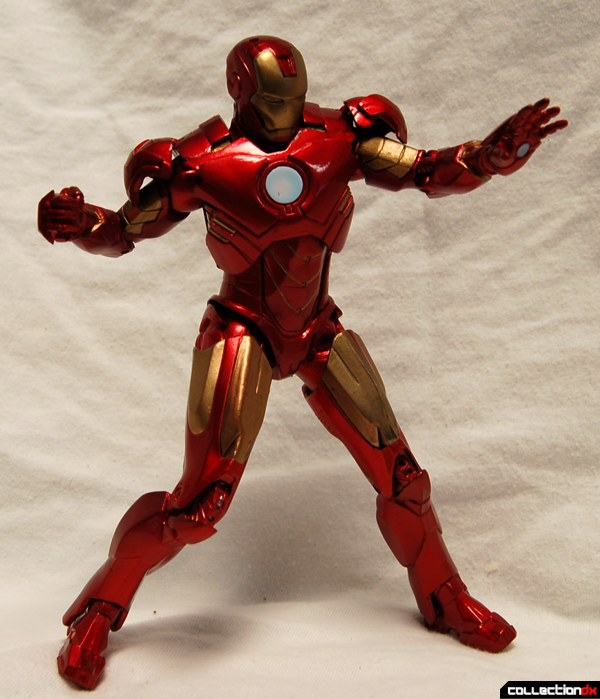 Diamond Select Toys figures sometimes have very odd choices in articulation design, but that is thankfully not the case here either. Iron Man is fully articulated in all the places you’d expect, including a great range of motion in the torso. One area that could be a little better is the head, which is on a ball joint, but partially blocked by the bulkiness of the chest. If the neck were just a touch longer, the chin would clear the bulky clavicle area no problem. Of note as well is the hips, which are extremely cleverly designed to strike a great balance between looks and function, something DST often flops at, preferring form over function. The hips feature sculpted detail that when in a neutral stance makes the figure look almost seamless and statue-like, but actually have a ball-joint at the hips, and a swivel at the top of the thigh where the solid thigh armor meets the flexible hip area, providing plenty of articulation while giving the figure a real layered look, like segments of armor are moving around the leg area. 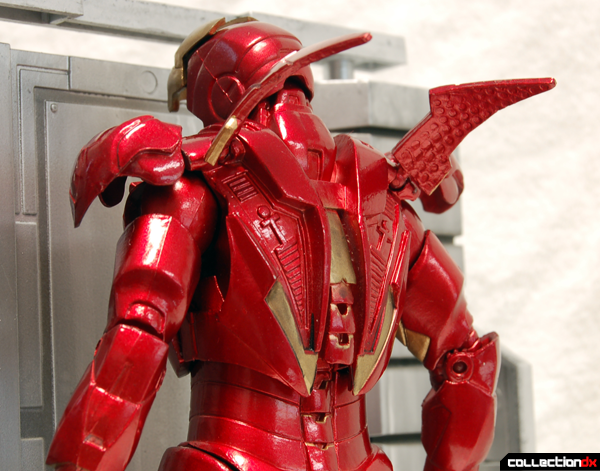 The figure also features a nice small ball joint for the shoulder pads, allowing a great range of motion and again, a proper multi-piece armored look for the shoulders. Two of the air-brake panels on the back also articulate, for in-flight poses. 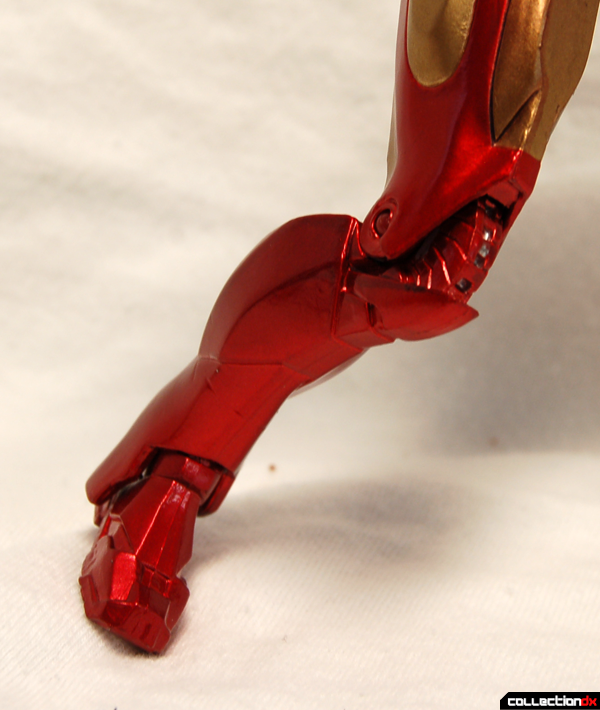 The knee and elbow joints also feature a detailed moving part to fill in the gaps when posed, giving the look of flexible armor segments sliding as the joints move. In the knees, these sculpted details also pull double duty as knee-joint detents, keeping the figure nice and stable. 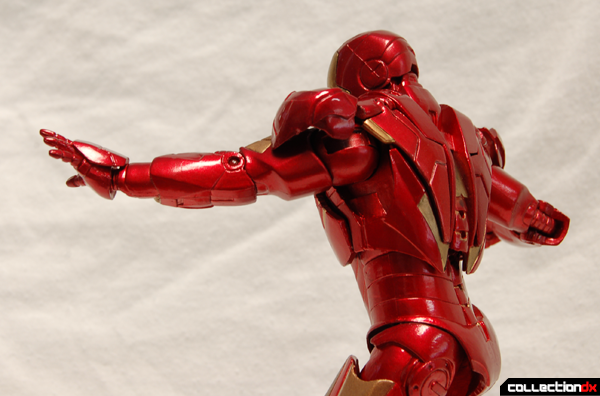 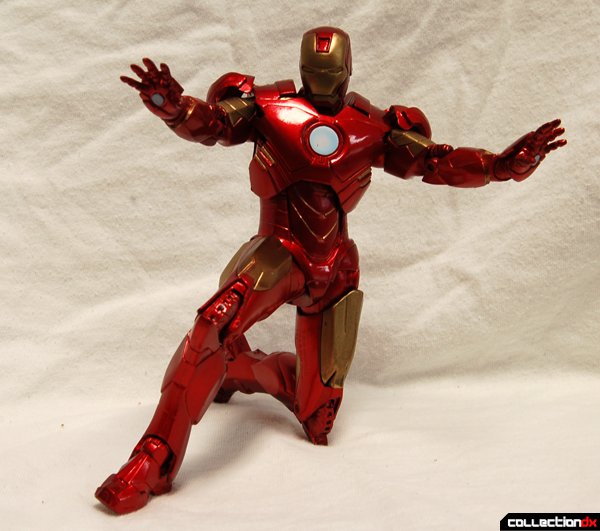 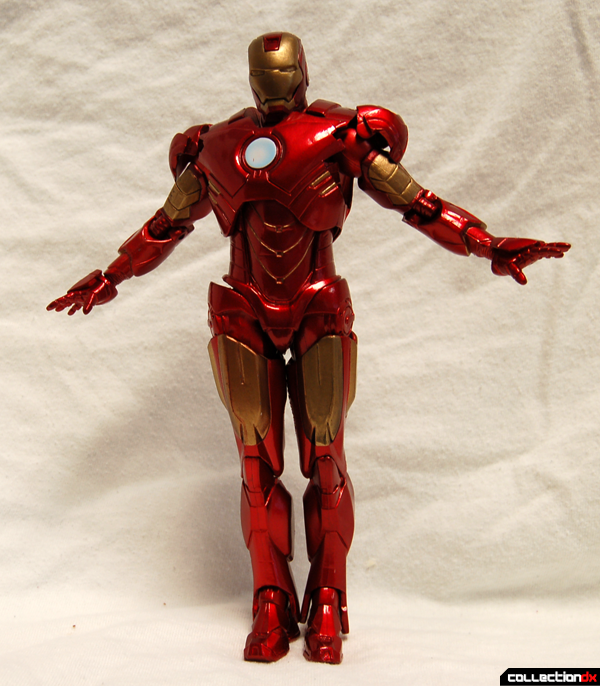 The articulation works really well overall. Some areas like the shoulders and ankles are a bit hindered by the sculpt of the armor, but that is to be expected. The figure can kneel, fight, and do a tremendous flying pose, all the while looking graceful and powerful.

Diamond Select Figures are produced on a much larger scale than something like a Hasbro figure, and feature much more limited distribution to comic and specialty shops, so they are a bit pricey. The Iron Man 2 figures are retailing for $19.99, but I really think they are worth it. The prices of the smaller Hasbro figures have gone up quite a bit, and for a little bit more, you can get much larger, accurately detailed, and more articulated figure that is fully painted and much better made. Even for twenty bucks, I think these figures are the best small-scale Iron Man 2 action figures available. Hasbro is releasing the main 3 ¾” line, as well as a limited couple of 6” figures, but the sculpts and details are much better looking and truer to the film by my eye on the Diamond toys, and the articulation is comparable (we’ll get to the one niggle here in my War Machine review). I have all of the small Iron Man 2 figures, but the chunky and solid Diamond ones are the ones I keep coming grabbing to play with and display. Diamond has been hit-or-miss in the past with their figures, but if you see one of these at the store, I would recommend picking it up, you will not be disappointed. 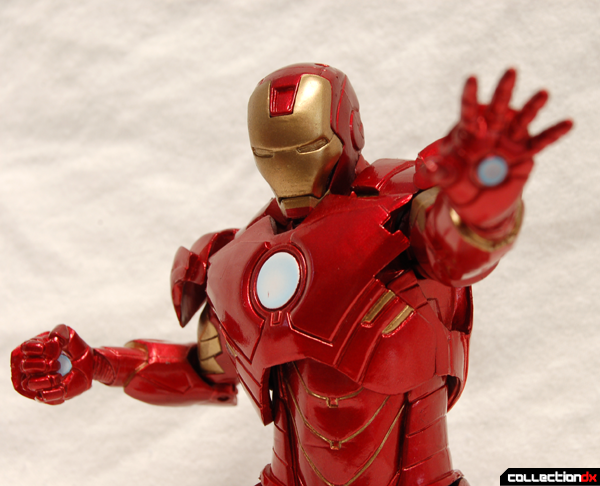 The lack of paint on the eyes is very odd, especially if the omission plagues the entire line of MKIV figures. If that's the case, it's obvious this was part of Diamond's plan (War Machine has painted eyes!). How dumb...just like how that Tony face sculpt looks.

"A sleek update that makes a classic even more classic."

They really need to represent the level of articulation on these, until now I had little interest in them since they appeared to be Mcfarlane-esque statues.