One of the most fun and endearing science fiction movies of the 1950s was Invasion Of The Saucer-Men, released in 1957 from A.I.P. studios. Although the movie's biggest name actor was Frank Gorshin (later The Riddler on the 1966 Batman TV show), the real stars of the movie were the aliens, as created by legendary prop man/costume designer the late Paul Blaisdell (1927-1983). Blaisdell was also responsible for such iconic monsters as Beulah from "It Conquered The World", Marty, the 3 Eyed Mutant from "The Day The World Ended", The She Creature from the movie of the same name and more. This resin statue of his alien Saucermen comes courtesy of Ultratumba Productions and was sculpted by Ultratumba's Paul Schiola. 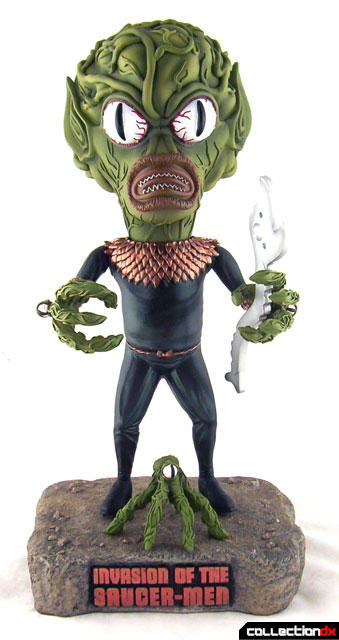 This pre-painted resin statue stands 14" tall and includes a display base with the movie title sculpted into it, raising the total height of the piece to a very impressive 15.75" tall. This will really stand out in your collection.

It comes packaged in a beautiful full color box, partially replicating the original (and highly sought after) movie poster. However, a picture of the figure has been added into the image and the effect is quite pleasing to the eye. The box alone is a substantial display piece at 18" tall, 13" across and 6.5" deep. Each side of the box is adorned with either a picture of the statue, stills from the movie (2) or best of all, an image of Paul Blaisdell and Bob Burns, along with a synopsis of the movie and Paul Schiola's thoughts on producing the statue. Overall, it's a very impressive presentation. 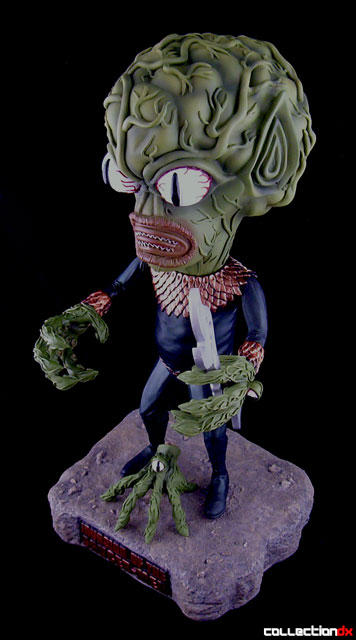 Although this statue is pre-painted, it does require a small amount of assembly. But don't panic, it's really simple to do. Just a bit of glue and all the pieces fit where they should with ease. There are 8 pieces included in the box, each wrapped in plastic and packed safely in styofoam. 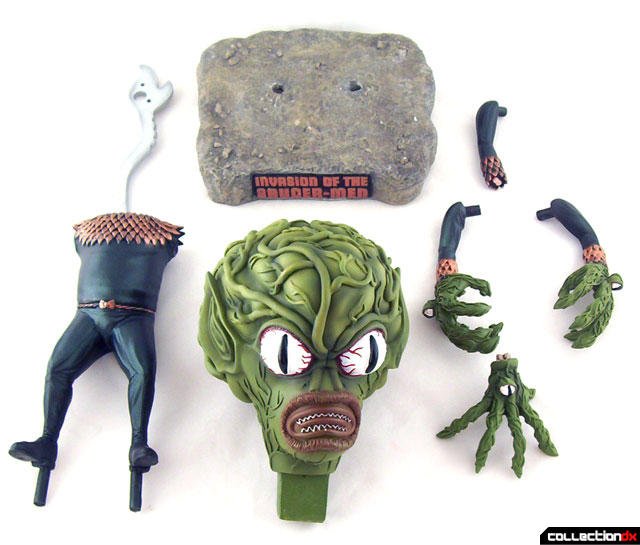 You'll notice that there are THREE arms in the picture above. This is because in the movie, one of the aliens gets it's hand cut off. So, here you have the option of displaying this with either two good arms, or one with the hand off. Of course, in the movie the hand continues to live and terrorize so an extra hand, standing up on it's fingers, is included as well. 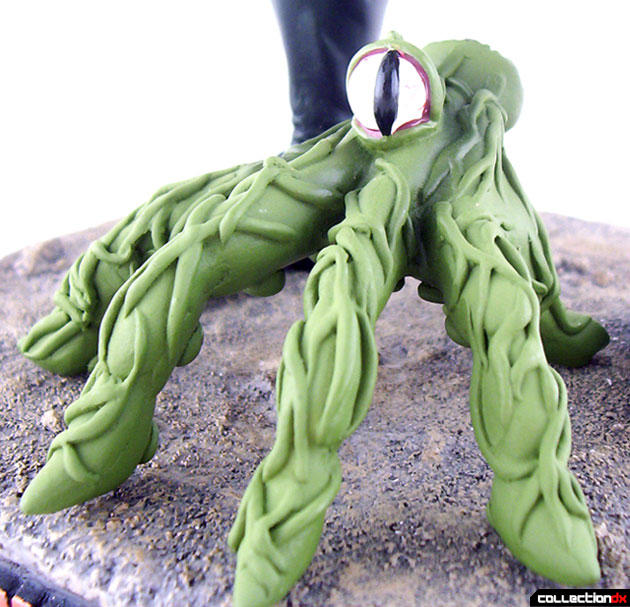 I've decided to display mine with the two good hands and the severed hand crawling at it's feet. It makes sense since there were multiple saucermen in the movie. Y'know what? Why do I keep telling you about this awesome movie? You SHOULD have already seen it and if you haven't, then watch it now. Seriously. RIGHT NOW!

Anyway, back to this statue. In addition to an alternate arm/hand, you can also choose to display it with a weapon held in the left hand if you want to. The weapon has a small tab that you can insert into a hole in the palm of the hand, but unfortunately, it really doesn't hold without a spot of glue. So, choose carefully if you want it in there or not. 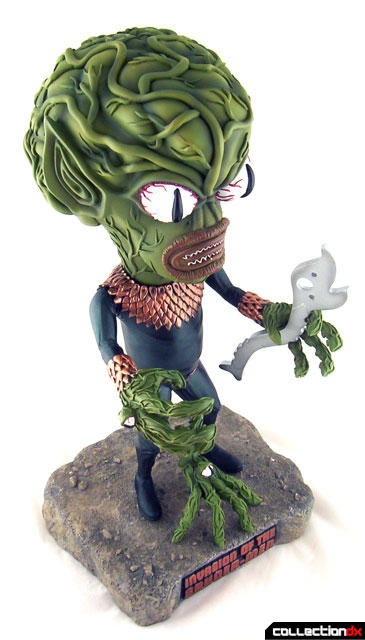 I think the sculpt on this thing is fantastic and it's one of my favorite items in my burgeoning monster collection. That huge head and those bulging eyes are irresistible. The veiny hands and head, the pointy ears...this is what saucermen look like! However, if you are the ultimate picky sort and think it doesn't look exactly like what you just saw onscreen, you should know that several different masks were used in the movie and Paul tried to incorporate the look of all of them into one piece, rather than go for a dead-on accurate representation of one particular mask. I think the final result looks amazing. Really, pictures don't do it justice. 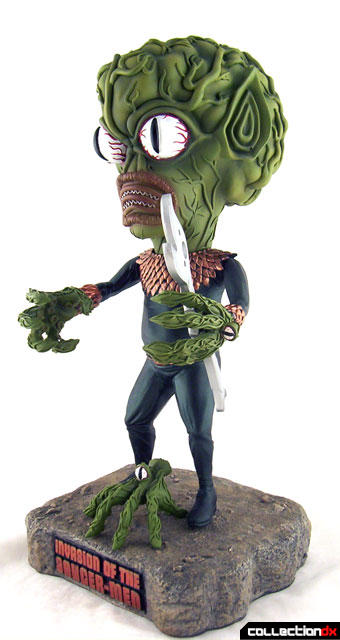 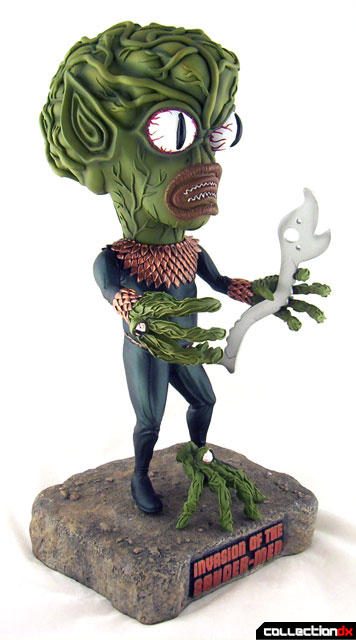 I'm not sure what else to say about this one. It's awesome. Just awesome. And it marks a definite upward trend from Ultratumba Productions. The Tingler was good. Beulah was great. And now this Saucerman is about to make my head explode. I can't wait to find out what is next.* This statue is limited to only 300 pieces so I highly recommend you link on over to Ultratumba and get one of these guys for yourself, before they are all sold out. If it's not yet on the products page there, just drop Paul an email at ultratumba@comcast.net and he'll hook you up. Or grab one on sale in the next 3 days at his Ebay store. You won't regret it. 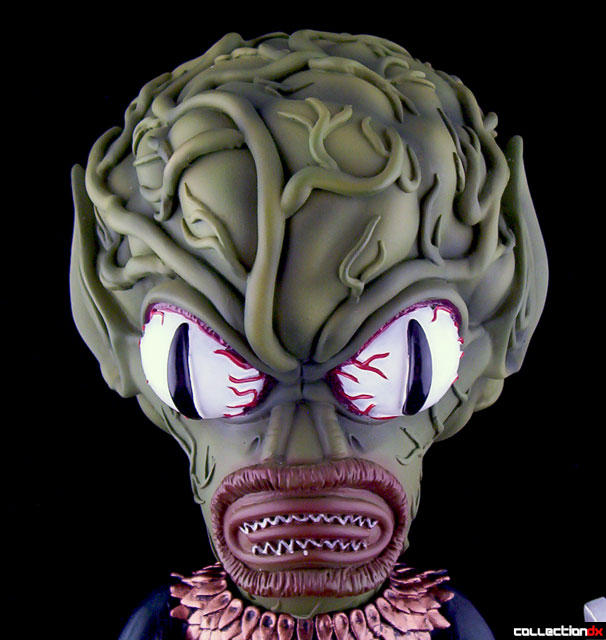 *Trivia time: Did you know that "Invasion of the Saucer-Men" was later remade for TV as "Attack of the Eye Creatures"? The director, Larry Buchanan, also remade "It Conquered The World" as "Zontar, The Thing from Venus". I saw both of the remakes before I saw the originals. Both originals have monsters created by Paul Blaisdell and both of those monsters have now been released as statues by Paul Schiola. Larry Buchanan also remade "The Day The World Ended" as "In The Year 2889". "The Day The World Ended" has a monster made by Paul Blaisdell...

Back in the 8T's somebody realeased a resin model kit of this figure but the cool feature of that release is that you could take off the head and replace it with the scuplted head of the actor that played the little saucer man.

It was real cool and it's in that magazine that I need to find and send to you.

I love the airbrushing and painting on this one, great review of one of the coolest creature to emerge from a saucer!

Looks like the kit you were talking about was made by Billiken. It looks pretty dang cool. I don't think I trust myself to try to paint it though.

That sounds really cool, Leonardo. It reminds me of that Godzilla vinyl that has the bottom half a Godzilla suit and the top half the actor. I was never into models but with a little help from Sanjeev, today I finished my first one ever, another Ultratumba one, "El Baron de Terror" (aka "The Brainiac") from the Mexican monster movie of the same name. It was fun and maybe I'll even review it later on..