Huffer comes from the Power Core Combiner line, a new(ish) line from Hasbro as part of their Transformers offerings. The line revolves around core figures that can combine with other vehicles to make larger robots. These other vehicles do not have robot modes, but they do transform from vehicle to limb automatically, which is nice. You can see some of them reviewed here. 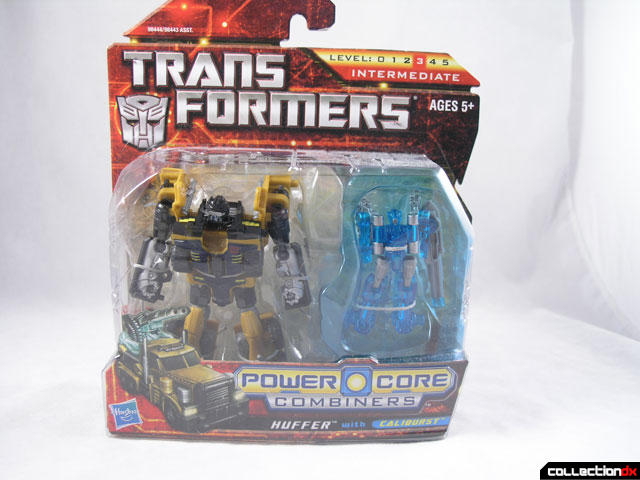 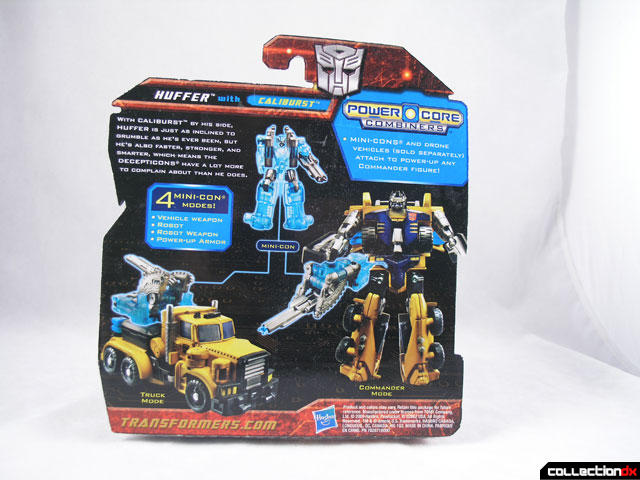 PCC’s are available in gift sets or individually. Collectors have not taken to the PCC line as they have to Generations or the Movie toys, despite feeling more like actual transformers than many of the other lines. Why is that?

These toys are aimed squarely at kids, relying on a central gimmick for play value, and collectors have traditionally stayed away from actual toys. It’s a shame, because these are pretty nice toys. Transformation is simple and designed for the younger hands, and the designs are bright and eye catching. 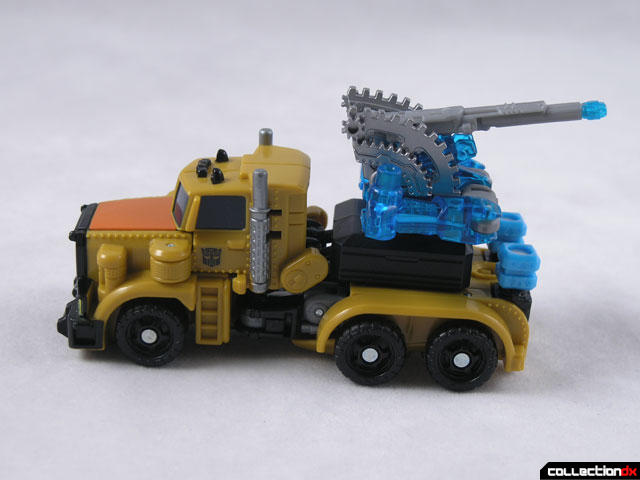 Huffer’s alt mode is a futuristic tow-truck, I think. It looks like something out of Mad Max, if Mad Max was a Saturday morning cartoon. It keeps with the theme of the G1 and subsequent versions of the character. The swatch of orange on the hood is almost the same shade as the original toy. 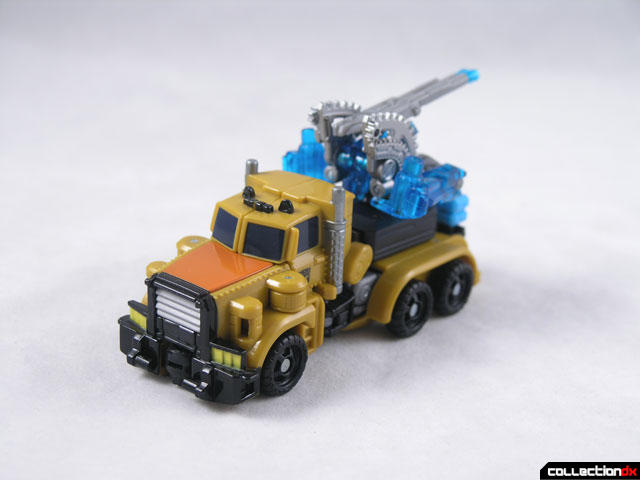 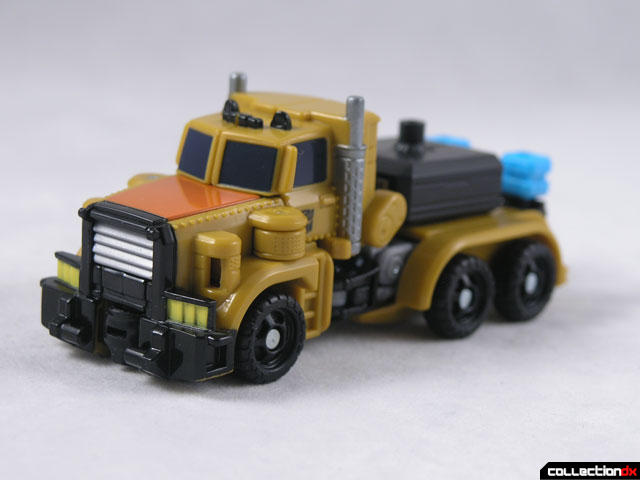 The back of the truck features a Minicon connection point in which you can connect the included figure “Caliburst” in a towing mode attachment. 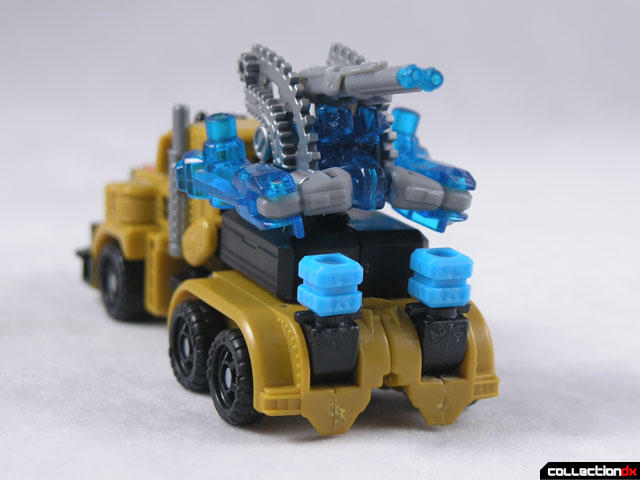 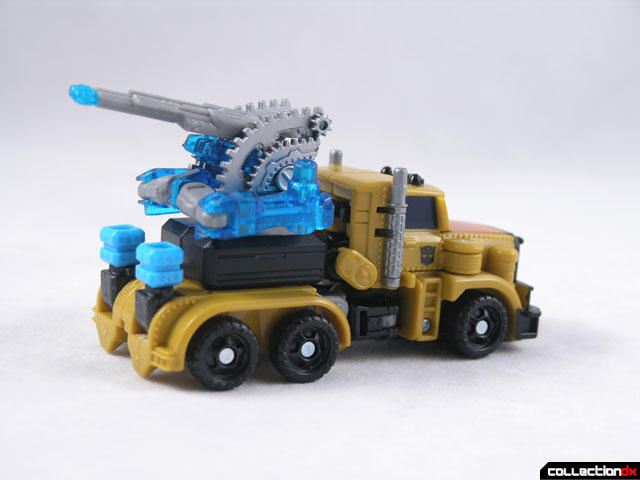 One glaring problem I see is that where the head tucks in under the grill – there’s no panel so it looks too obvious that there’s a head there. 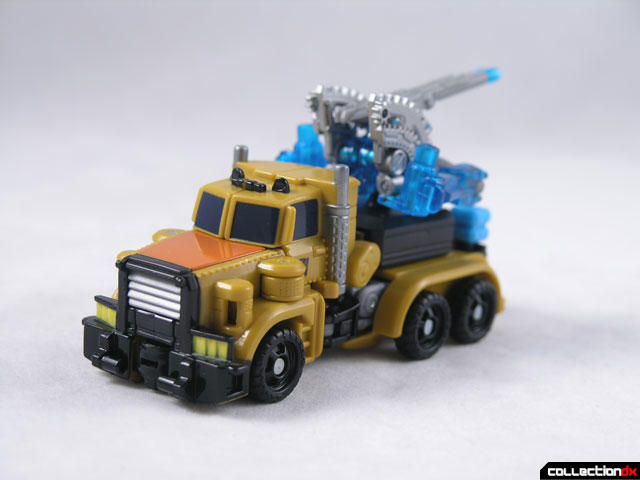 Transformation is very simple. Remove the Minicon from the back and then split the black block below and swing around to the top where the sides snap in. Separate the legs and the flip up the head. 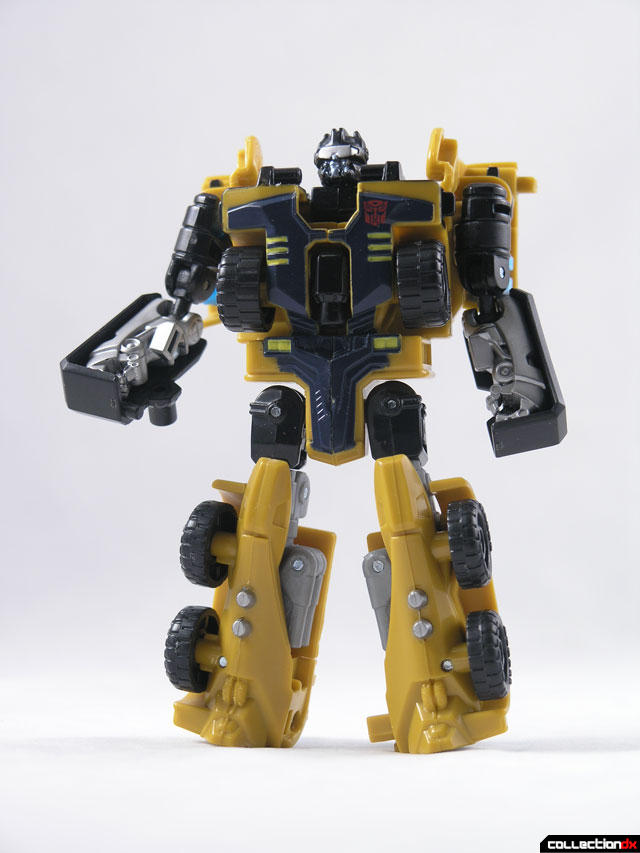 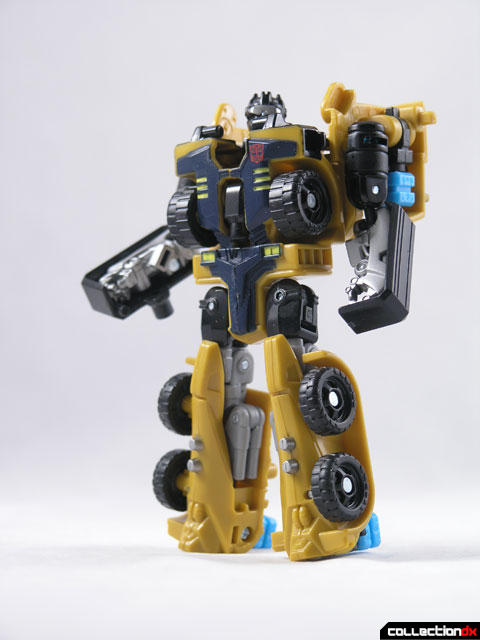 In robot mode, Huffer sports the classic visor and silver arms from his G1 incarnation, but that’s about all that remains of his original appearance. Huffer has a solid robot mode with great articulation. The head, shoulders, and elbows are all on ball joints, the legs have swivel and hinge hips, swivel thighs, and hinged knees. 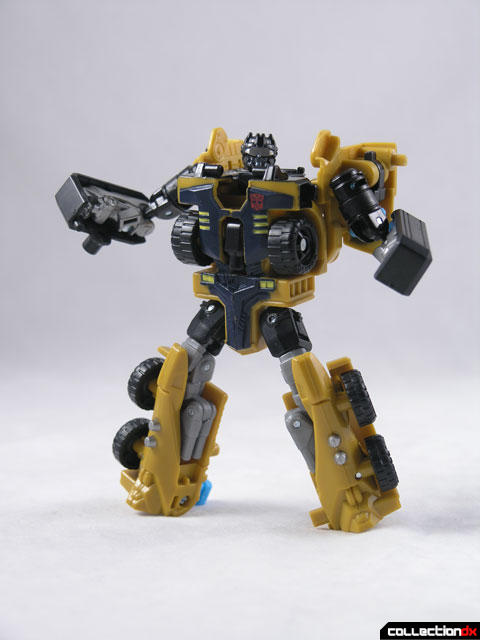 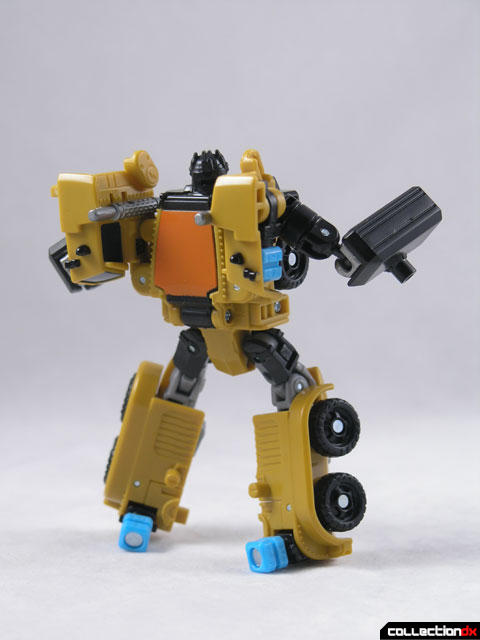 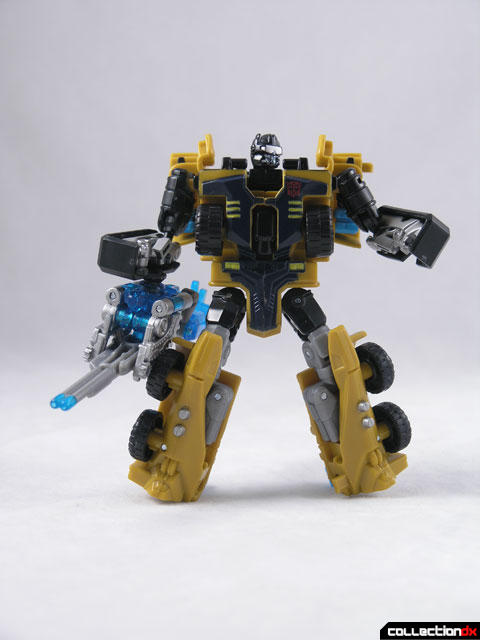 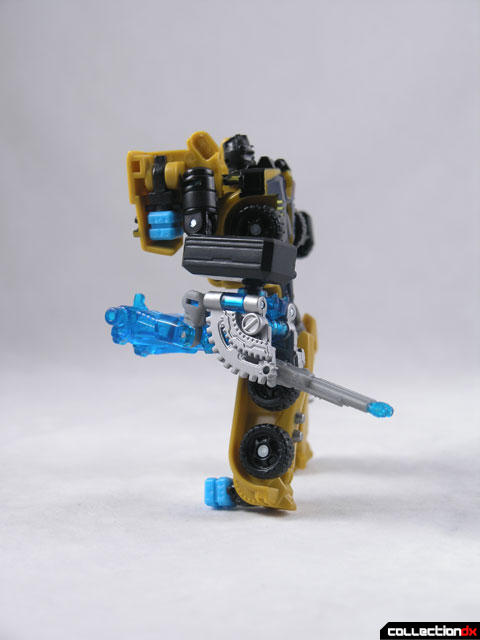 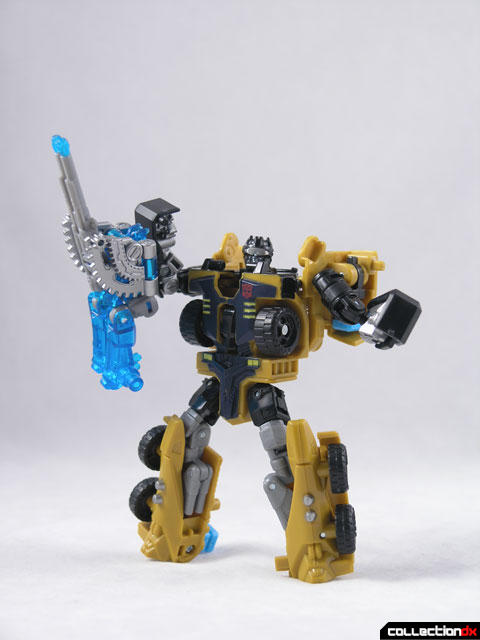 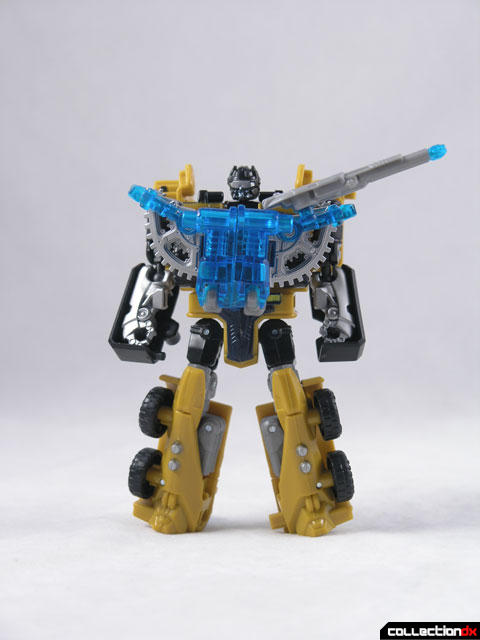 Caliburst is the main reason I picked up this set. I loved the idea of the clear blue mini-figure with silver details. I thought it looked very micro-man like. Unfortunately the silver paint was duller than what we saw at Toy Fair last year, but according to Hasbro, the American market does not like chrome. 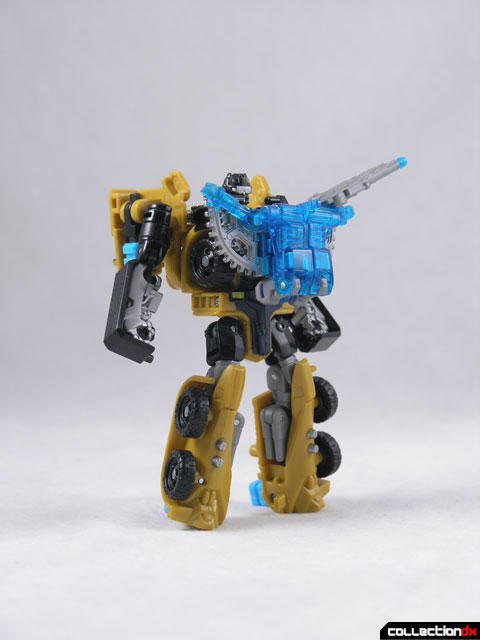 Huffer can also transform into the “Core” of the Oower Core Combiner. At the end of the legs and behind the shoulders there are blue connection points that flip out to connect with any drone. There’s also an alternate head under the hood that gets used in the larger combined form. It seems though that you cannot just buy a pack of drones separately, you need to buy a whole set, and then swap drones out between the two. 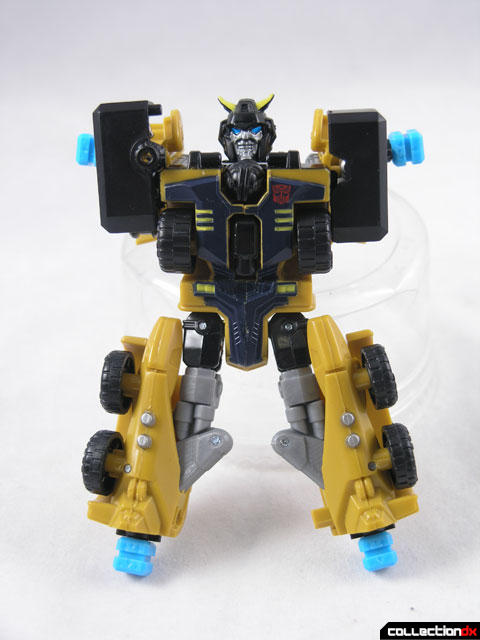 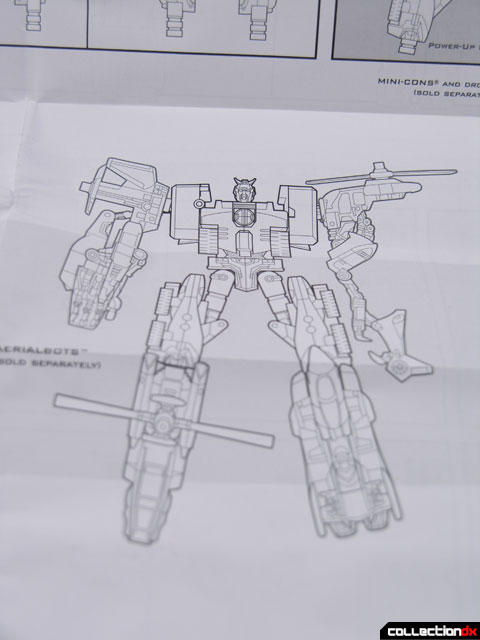 I'll be covering Autobot Double Clutch w/ Rallybots soon, which is a full 5-piece PCC set... the ONLY PCC I want. (Although Icepick looked kinda interesting...)