Back when I was a wee lad there were a plethora of what I consider to be "go-nowhere" toy lines that sprang up with only a handful of commercials to promote them. While many of these lines came from prominent manufacturers such as Mattel or Hasbro, they tended to be focused entirely on one gimmick. For Hot Wheels Key Force, "YOU GOT TA HAVE A KEY!"

The overall theme of Key Force was very similar to M.A.S.K. in that it featured conventional vehicles transforming into all different kinds of fighting machines. I honestly don't recall if I particularly wanted the Key Force Van, but in retrospect it is probably the best toy of the line. 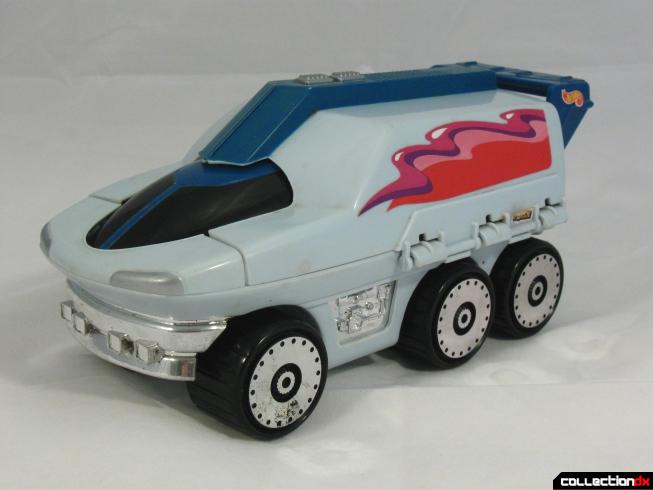 The Van starts off as a very "futuristic" six-wheeled vehicle. It rolls along on very squeaky plastic wheels and features some basic paper sticker details. I like the strange paint splatter that adorns the sides. It's like a conversion van of the future. 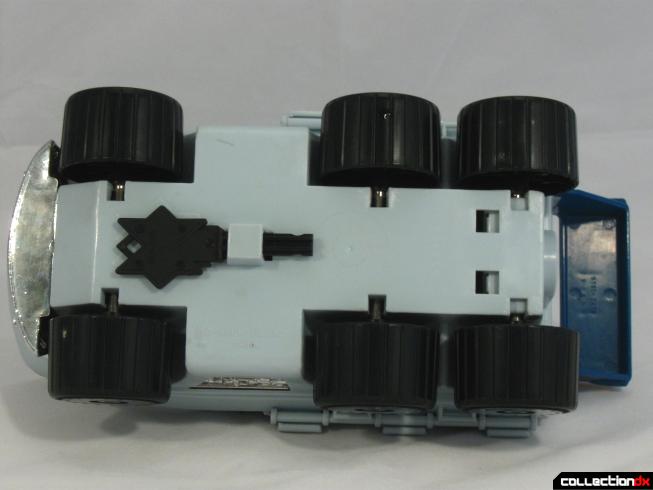 Each Key Force vehicle came with two plastic keys. One key could be stored on the underside. Enterprising young children were encouraged to keep their duplicate keys on a fake key ring. 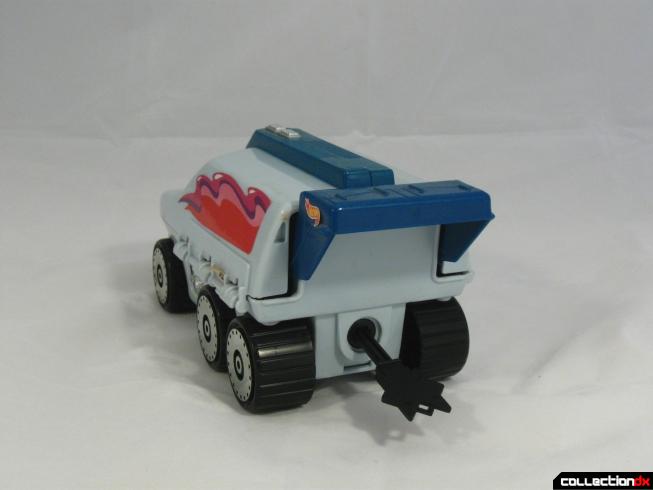 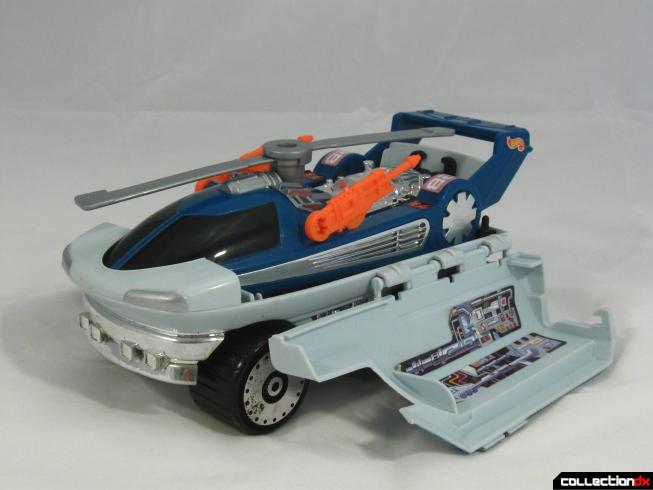 The lock on the back of the Van releases its inner contents. This futuristic lunchbox on wheels has a helicopter inside. The main rotor is spring loaded and will unfold when the van casing opens up. 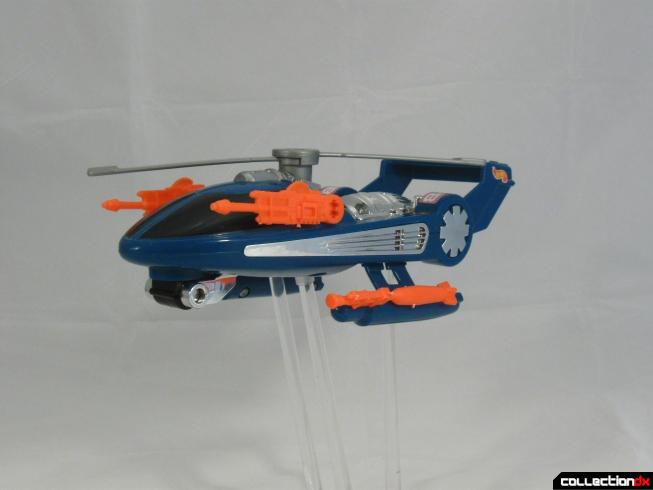 The helicopter itself is much nicer than the exterior. Despite the glaring lack of a tail rotor (then again maybe the circular vents are the rotors), it looks almost like a feasible design. I especially like the chrome engine detail and chrome air vanes. The bright orange weapons are a little gaudy. The fact that they come packaged on a parts tree is just asking for sloppy work as little hands weren't always wizened by the ways of Gunpla. Also did I forget to mention you're supposed to extend the pontoons and side guns using the key? Even as a kid I thought using the key for something like that was completely unnecessary. 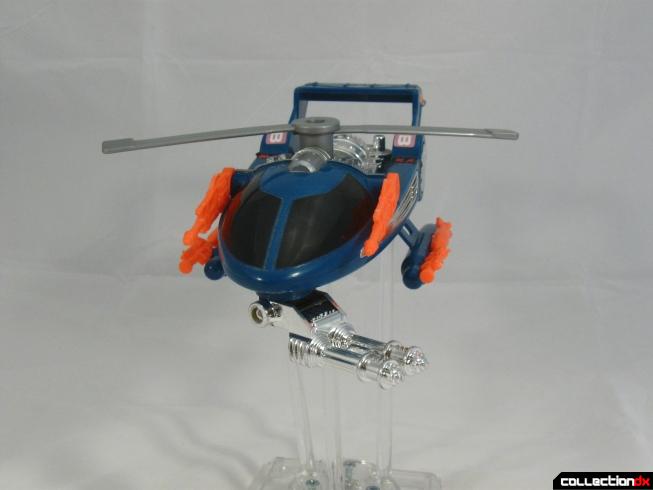 The back of the helicopter features another key slot which is used to control the flip-out gun turret. Pushing the key inward unlocks the gun and twisting the key rotates the gun left or right. The rotation has never been that smooth and if it was I doubt it would stay that way with constant play. 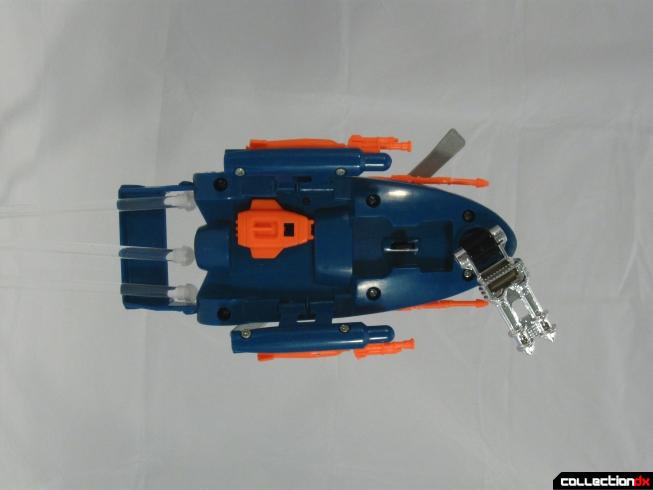 The final key gimmick is a small bomb on the underside of the helicopter. Inserting the key into a side slot drops the bomb. It's not nearly as exciting as the commercial suggests.

Overall I can see why this line quickly died off with little notice from toy collectors. The key gimmick (pun intended) is just too bulky to allow for anything other than variations on spring loaded panels. Normally I don't go for toys with a lunchbox style of transformation, but this one has enough childlike coolness in the helicopter that I think it stands out from the rest of the line.

VF5SS- enable users to contact you through your profile, please!

The volume on your video is soooooooo quiet that I had to turn my volume all the way up to even hear you whisper! Is that just me?

When I first saw this, I could have sworn I remembered it, but if it came out in '93, I'd have been 18 and long past my initial toy phase. The 'copter is neat, but I agree, the key gimmick is forced and a bit silly.

I *think* I vaguely remember key-activated gimmicky Hot Wheels toys, but this doesn't ring any bells. Great review of a toy that looks like a blast.

At first as was a bit apprehensive about being so uninterested in the video, but in retrospect is provides a nice contrast between the reality and the EXTREEEEEEEEEEEEEEME commercial.

I dont know if you remember this show that aired in the 80's, it was called the highwayman. There were these guys who traveled in big trucks that contained a helicopter in one and a sportscar in another one. This toy is similar to the first truck :)

Ah, I remember the show... the design was great... (almost) ordinary vehicle turns to battle mode... a bit MASK-que to me...

Anyway, like others have mentioned, this totally reminds me of Slingshot from M.A.S.K.