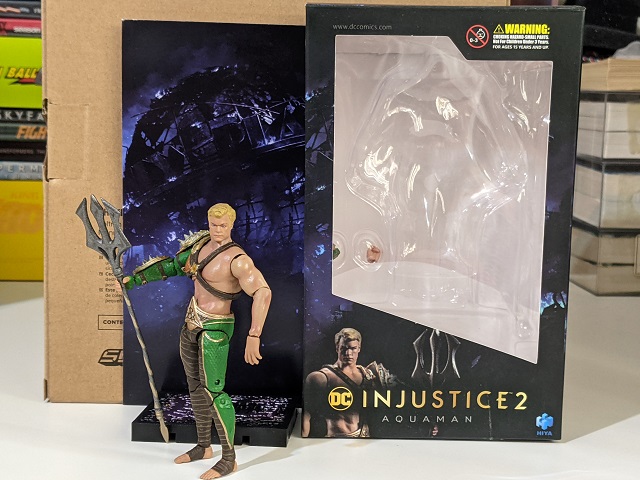 For the first time ever, I'm having a look at an Exquisite Mini figure. Provided courtesy of Hiya Toys, I've got the king of the seas himself, Aquaman.

The box is smaller than what I'm accustomed to, but it jives. 1:18-scale makes this guy about 3.75 inches. And the package design is nice. The clear window gives you a good view inside. 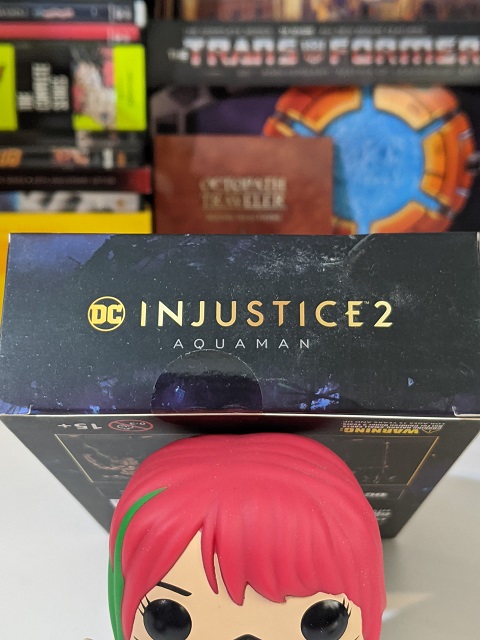 And with Injustice 2, DC, and Aquaman neatly printed on every side, you can display this any way you want and have something to show off. 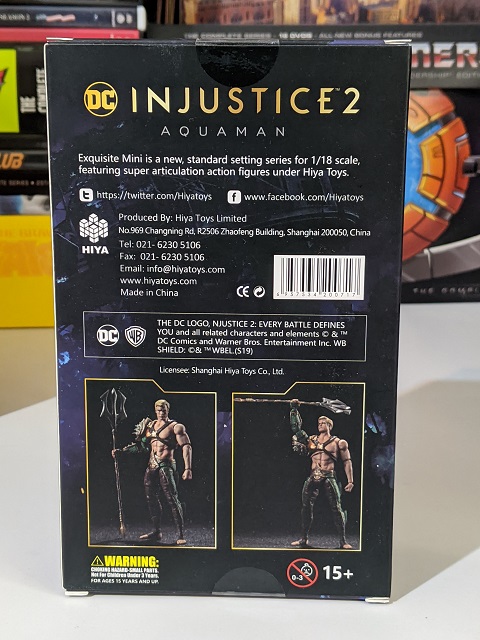 The back tells you what this toy line is about, and gives you two pictures. Sadly, they depict about all I was going to get out of this guy. There's some good here too though.

Aquaman isn't one of my big three (Batman, Iron Man, Spider-Man). But I like the character. The concept is cool, and I especially enjoy his depiction in the original DCAU. Between Superman: the Animated Series, Justice League, and Justice League: Unlimited, he got enough time to become a star character. And between the comics, other animated features, and the movies, he's back in the public consciousness as being serious rather than a joke.

I've played the first Injustice with friends. There's a lot to like. So if anything, I'm surprised more toys haven't been made. Point is, a fan would be motivated to pick this up. 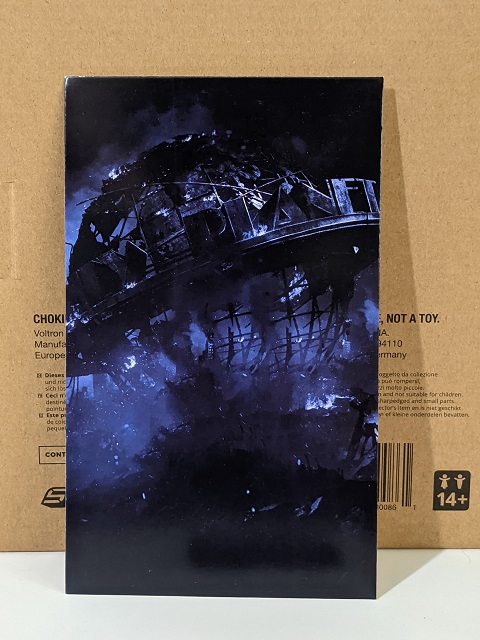 Besides what you'd expect, there's a diorama backdrop in the box. Not sure if it's from a specific stage or more general, but it captures the tone of the game. It's big enough for Aquaman solo, but would be even better if the other Injustice 2 figures give you more to go with it. 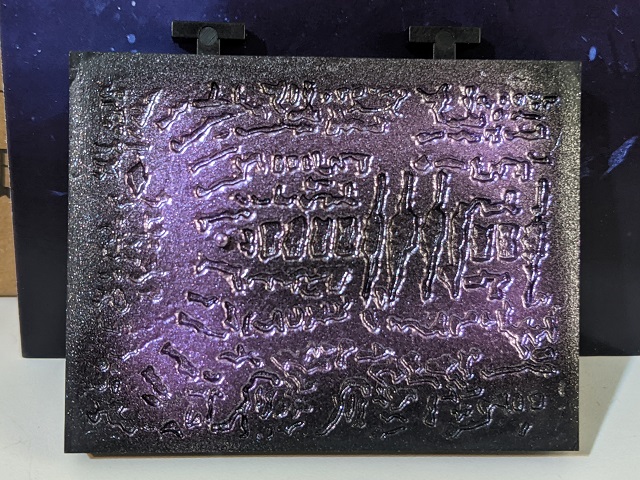 There's a display stand too. No idea what it relates too, but it's nice in blending black and purple, so I'm with it. I'm guessing the separate extender pieces you see up top are to connect with other display stands from other figures. That's really cool, but I wish there were insets so the backdrop could attach.

Maybe it's not even meant to be a diorama, but just a background for the box. If so, it's a missed opportunity. There are no instructions either, so it's up to you to decide. 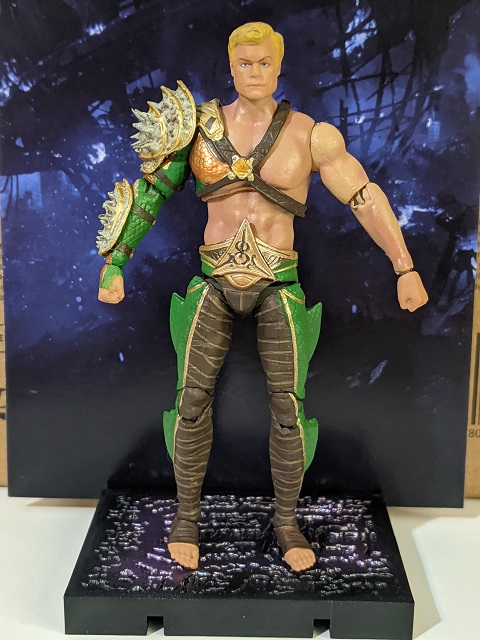 I like starting with the good, so let me say this first. Aquaman here looks great, especially at this scale. The paint looks great everywhere, except around the joints in his left arm. The sculpting is great everywhere. The armor plates and vest are soft, but the fins on his pants and his belt buckle are firm. He feels good to the touch.

And I really dig the body design. He's muscular, but not like a body builder. He looks more like someone from a movie poster. Maybe Steve McQueen or Race Bannon. Maybe Johnny Quest if he ever became an adult. Or a young Charlton Heston. 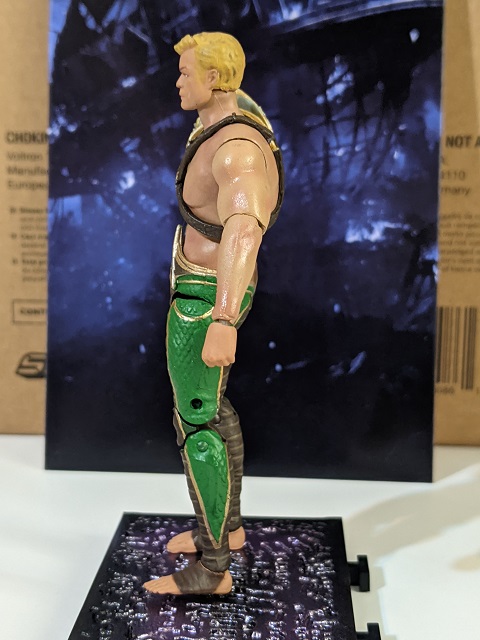 You could probably remove the harness if you want, but I don't recommend it. 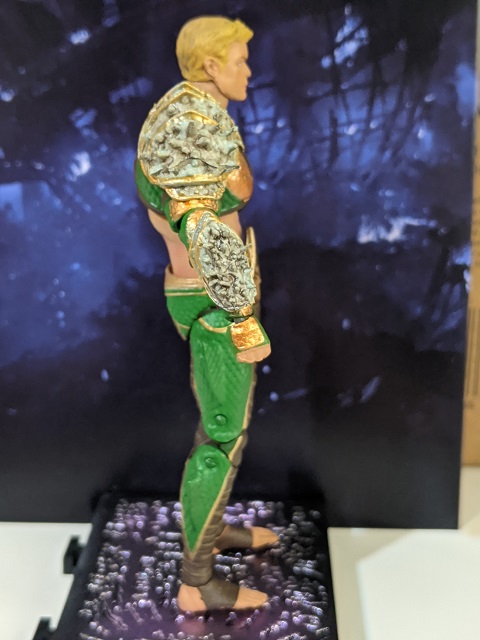 I wouldn't expect a distinct texture at this size or price, but I love that the armor actually looks like shells or something else that's been hardened by being deep underwater for a long time. 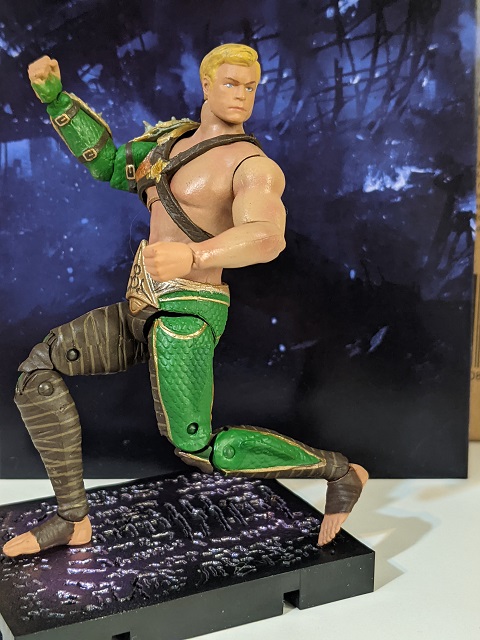 In terms of articulation, it's a mixed bag. The knees are stiff, double-jointed, with knee caps on the joints. So they look good and give a really deep bend. Nice.

The waist & chest are realistic. So you don't get twisting so much as leaning, and that's cool.
I thought the ankles were non-existent at first, but I had to break them in. They've got plenty of forward & back, but no side tilt, no rocking. So that's kind of meh.

The head is perfect, and tilts in every direction. 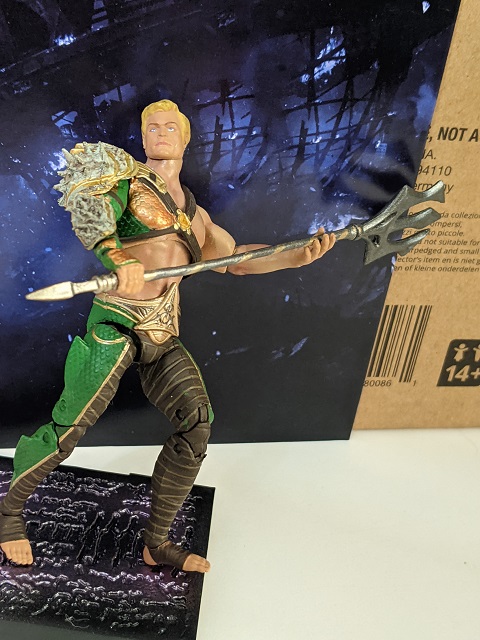 But the arms are what really bring everything down. The hands rotate, but don't feel safe to tilt. The elbows swivel, but don't even get 90-degress of bend. And the shoulders rotate vertically, but that's it. Even though you see the joint, there's no horizontal give. Unless this particular figure is a dud, it feels like they'll break if you keep pushing. I'd maybe call the right arm an acceptable loss because of the armor, but there's no excuse for the left.

And you do get two alternate hands, one tight grip and one loose grip for holding his trident. But after swapping them just once, the pegs they attach to come out with the hands every time now. I have to use my teeth to get them free. These are tiny parts, so if you're fiddling with this, do it where you can easily find things that fall to the floor.

I'm not going to knock this guy, because I feel like Hiya is on the cusp of doing something really cool, and at a very affordable price. But he's not perfect. Less fun toy, more cool display piece.

Recommended for fans of DC comics, Injustice, Aquaman, or anyone who likes small toys or action figures.