Three down, two to go. The Green Lion with Pidge from Matty Collector arrived a few weeks, back right before I had to pack up and move. Now that I am all settled again I finally had a chance to sit down and fiddle with it. 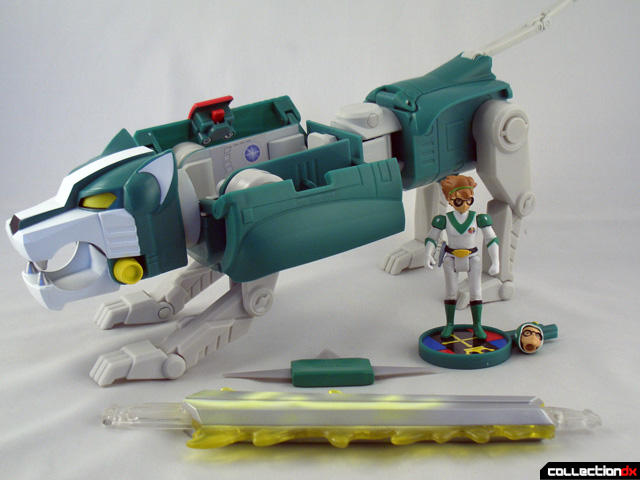 Sadly, the packaging got ditched during the move so no pics of that this time around. No surprises, here though. It was identical to previous releases with the Lion in a clear window box and the figure packed seperatly in a cheap cardboard box. 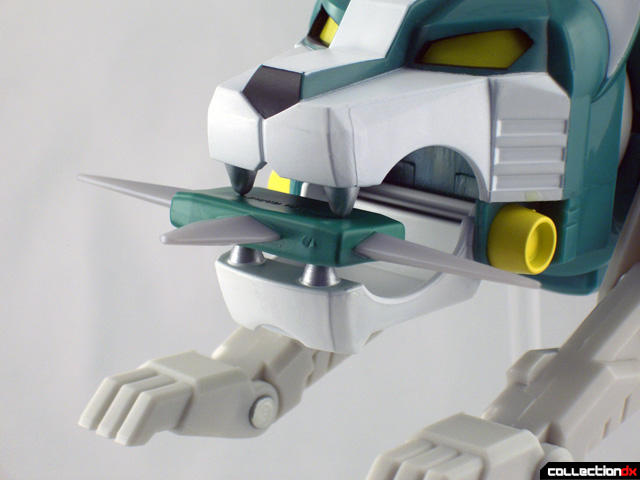 Included in the set is the Green Lion, mouth blade, piece of the (NOT-LIGHT-UP) collect-and-connect Blazing Sword, Pidge figure (with helmeted and un-helmeted head), and a figure stand shaped in the form of a Lion key. 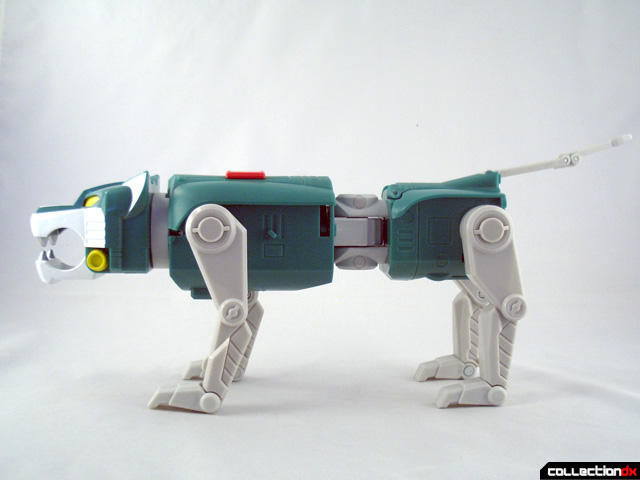 Once again proving Matty Collector isn't paying attention to the little things, they do not give you the “next” piece of the blazing sword to attach. They give you the piece after that. So instead of having a sword that is being built up as I go I am now keeping track of extra parts I can't use yet. Not a huge deal, but sloppy production planing on their part that they can’t even get their “Collect-and-Connect” stuff out in a proper order. 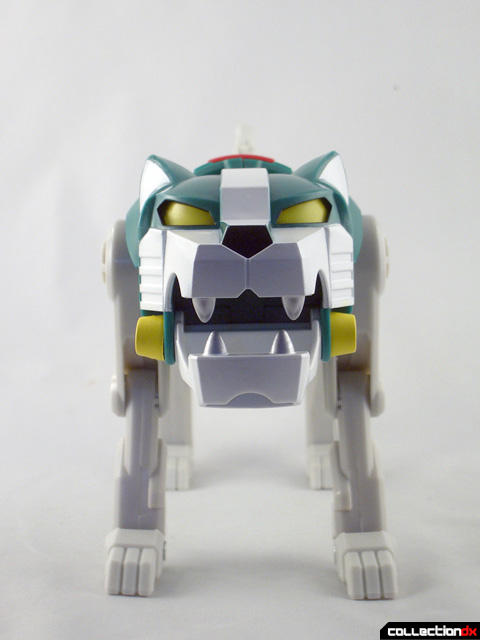 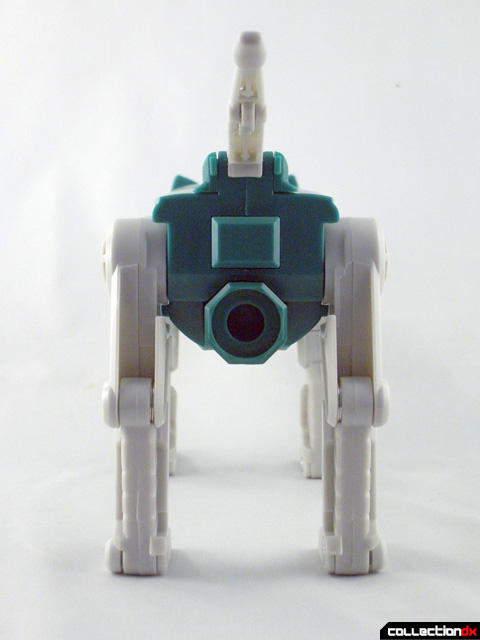 My Green Lion appears to be a pretty flawless sample this time around with no major issues. The legs are tight and springy, and the springs all appear to be staying put. 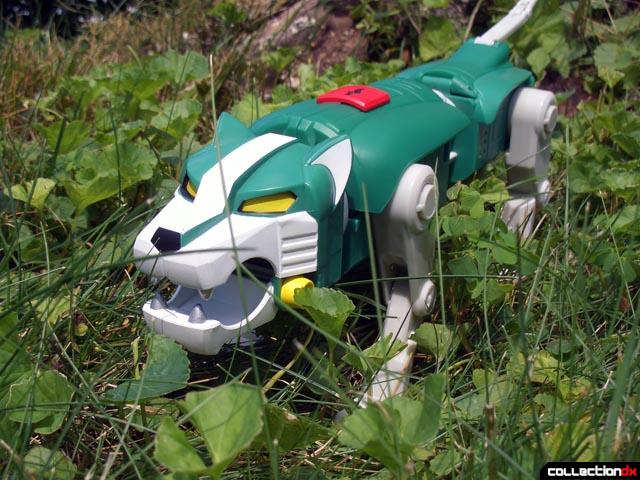 I have seen numerous reports of scrapped up nose/mouths this time around. Luckily mine doesn't have this issue. 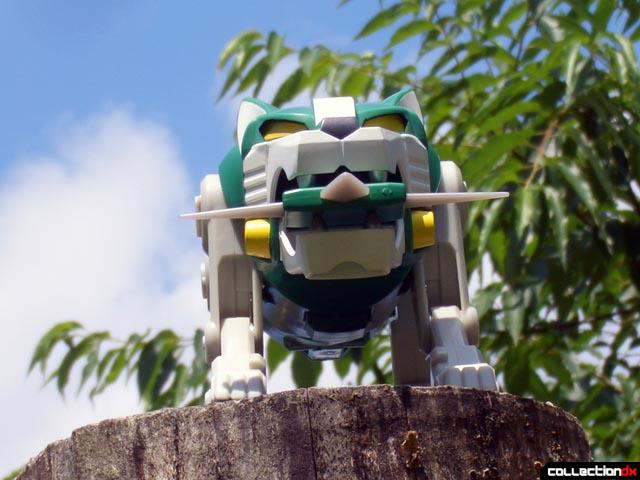 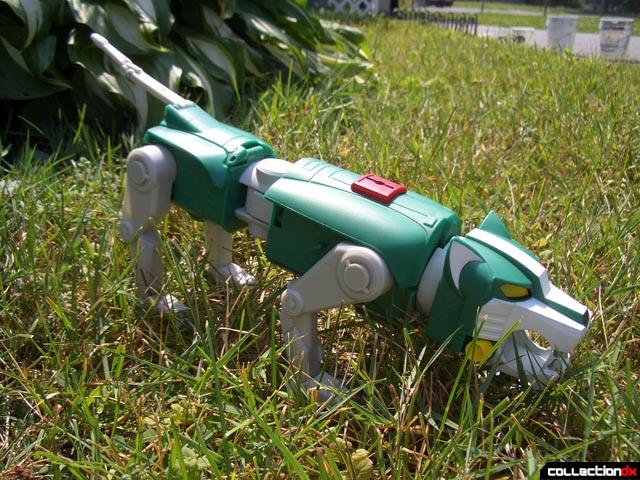 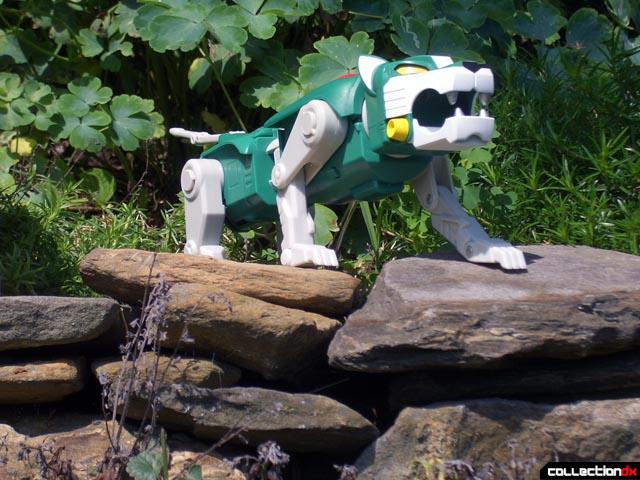 One of the gimmicks of this new Voltron line is that the Lion’s accommodate 3 3/4th scale figures. These are designed to use the figure stands (Lion keys) to open the cockpit. 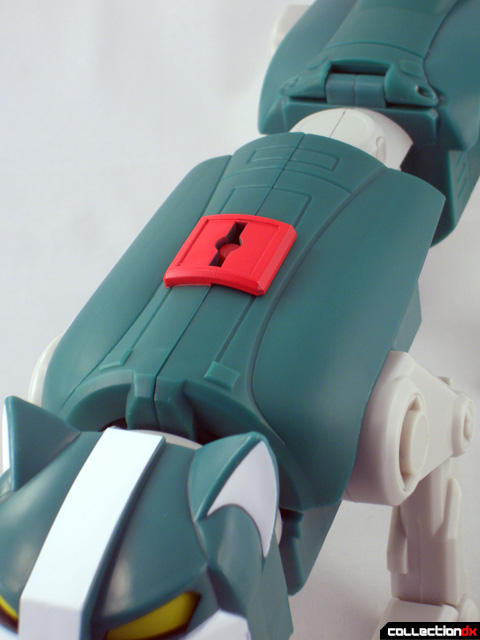 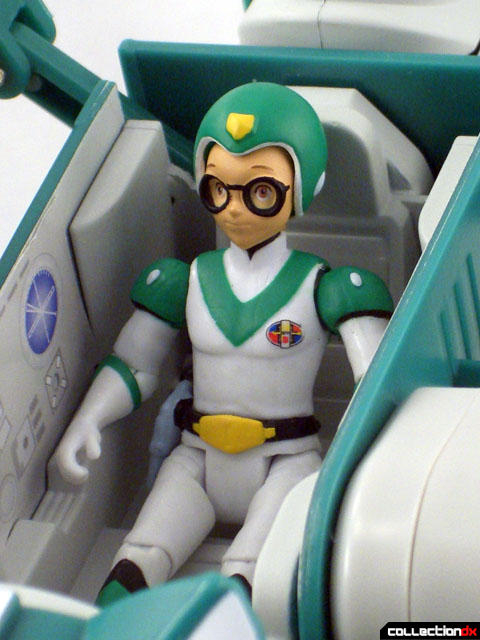 Both the Red and Green lion don't actually NEED the key to open the cockpits up. Just using your fingertip will unlock them. The green Lion's doors don't stay closed very securely. The slightest touch will unlock the doors to this lion. 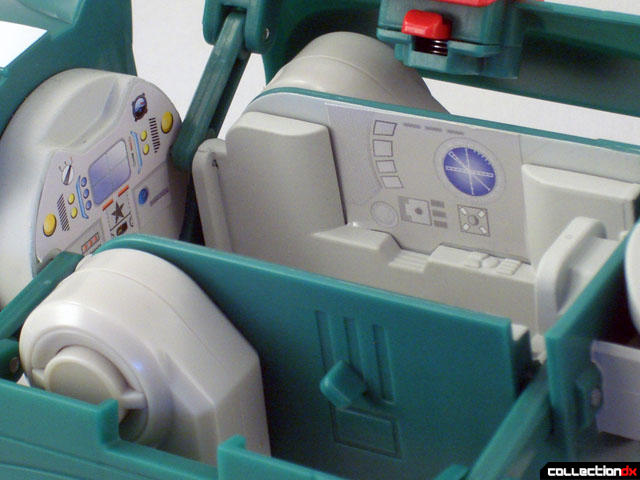 Pidge fits inside just fine, but because he is so little he just flops around the cockpit. Stickers on my sample are all on neat and straight. 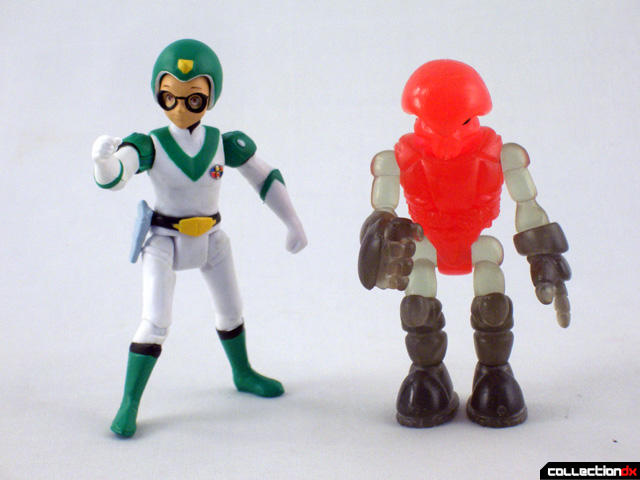 The Pidge figure is the weak part of the set. Overall he just looks poorly sculpted and executed with large, child-bearing hips and the dumbest looking helmeted head I’ve seen in years. The helmet sits to high on his head and just doesn't look right. I may be able to pull that apart and “fix” it, but for the outrageous prices these things have cost us I shouldn't have to. 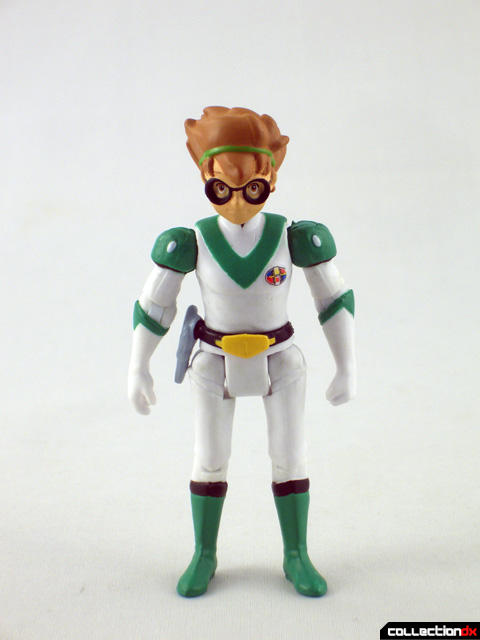 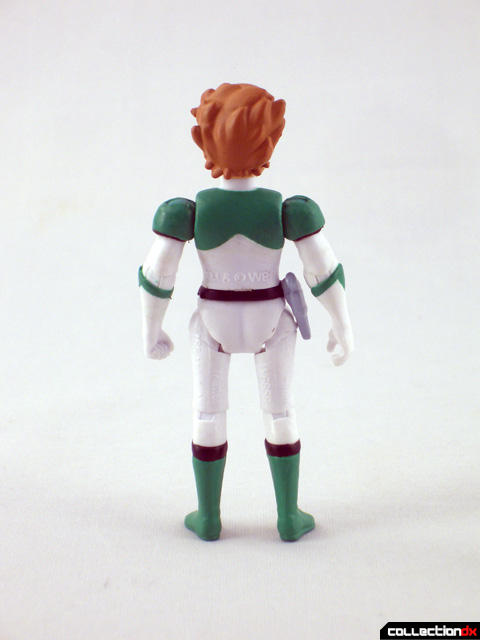 The unhelmeted head looks much better. Nothing you can do about those redicuous hips though... 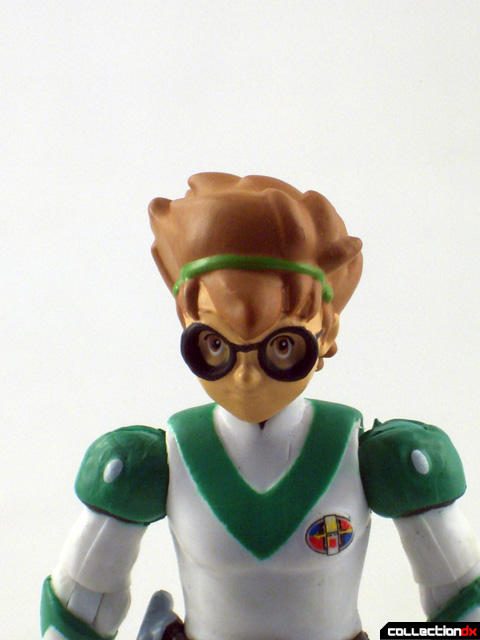 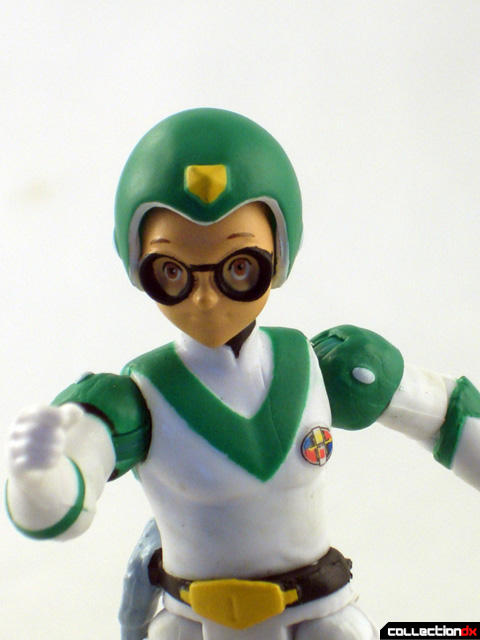 Transformation is identical to the Red Lion. Legs fold up and lock in, and the tail stores in a panel in the rear. 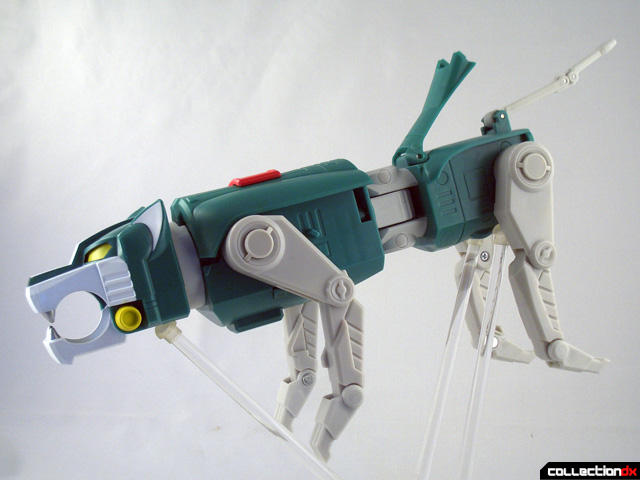 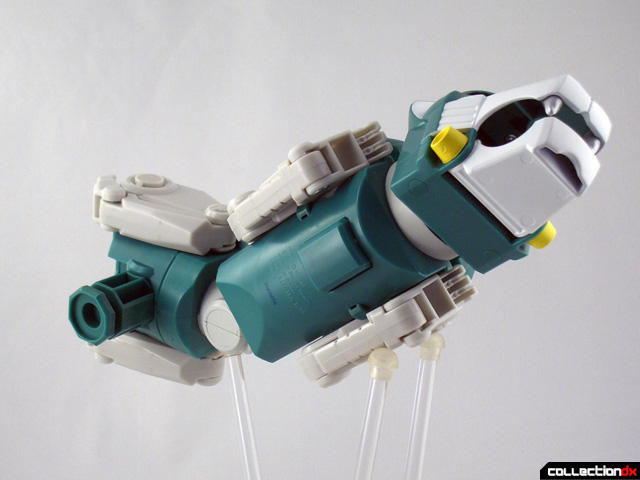 Flip out the arm connection peg, and you are done. 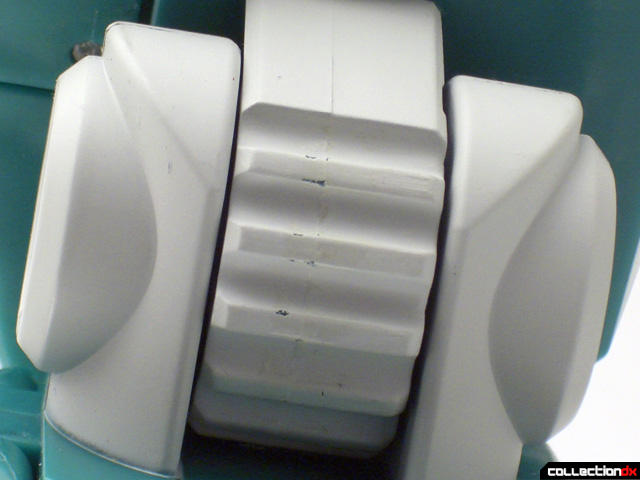 While Matty Collector seems have attempted to address our issues with their painted ratchet joint in the elbows by using a much heavier and thicker paint, it is still a painted ratchet joint. While it hasn’t worn as heavily as the Red Lion I can tell that over time both elbow areas will look pretty awful. I am completely dumbfounded that no-one at Matty Collector caught that painting an elbow joint may not be the brightest idea... 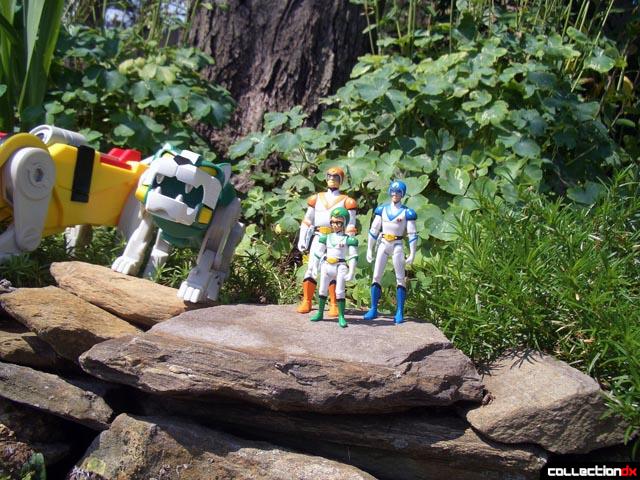 At this point there is not much else to say. It’s more of the same I have come to expect from Matty Collector. It's a waiting game till October when the Black Lion comes out and we find out how well this all stays together. 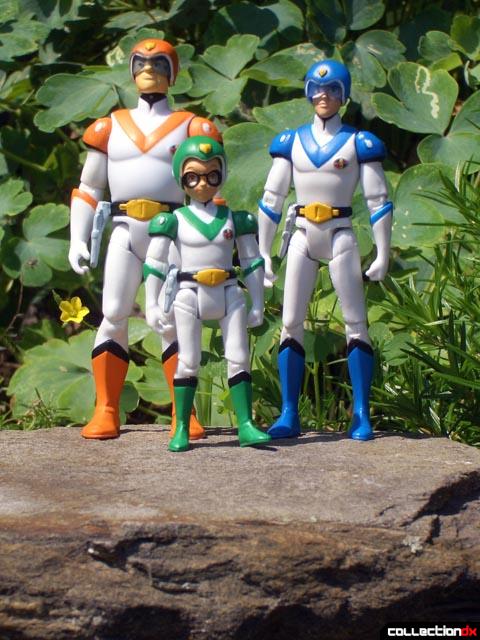 I am hoping the whole is greater than the sum of its parts. We’ll know soon enough. 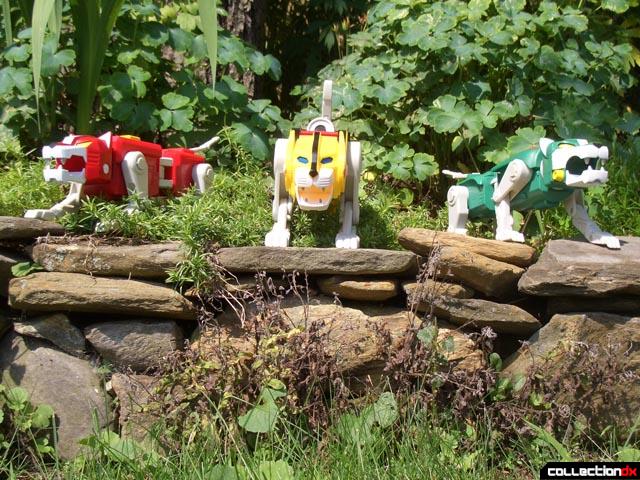 Spot on about the collect n connect sword. It irked me to no end that they didn't put in the next logical piece. To think people are clamoring for Matty to do a Vehicle Voltron after what they've put out thus far is crazy. I cant wait to be done with this and not give Matty any more of my money.

I am grateful to you for making these reviews so I do not feel bad about missing it. I will be content with my other Voltron I have.

Though I will say that Blazing Sword Voltron was an awesome toy. I let my 3-year old play with it. It is "hers" she says.

That was true,but funnily enough it turns out for whatever reason this is the year that people are finally turning on Matty. After years of mismanaged,poorly made,over expensive figures it looks like their Masters of the Universe collector's line isn't going to get the number of subscribtions Matty "needs" to keep it going. They've even got the four horsemen basically standing on the corner holding out their hats,PLEADING to the fans to pay up this year.

The thing is,the whole Matty Collector thing was designed around MOTU. If MOTU dies,so does Matty. Ghostbusters,DC Comics,and WWE all flopped as online exclusives,and obviously Voltron's been getting a lot of negative reaction.

Bottom line,you can forget about vehicle Voltron,and that's probably for the best.

I've bought some MOTUC figures over the past year and they are pretty good toys. Not what I consider a truly collectible toys, but still fun. I certainly have no qualms about giving them to my 2-year old nephew instead of him trying to get at my Hot Toys Superman. kidnicky is totally right about people turning on Mattycollector. I have a buddy who is into MOTU so I've followed the drama that's going on. With the price increase, international shipping issues, and continued use of Digital River (the worst effing company I've ever dealt with) no wonder people aren't buying subscriptions, which are kind of silly to begin with. I understand people have different styles, but for me, as a toy collector, half the fun is the thrill of the hunt. I love finding a bargain, so blindly giving Matty 500 bucks for a year with a mostly unrevealed line-up of toys is weird to me. I think Atom and Josh mentioned it in the awesome Yellow Lion podcast a while back that most of the people who collect Matty stuff are different from the folks that frequent CDX. I'm getting the Voltron from Matty and I look at it next to my SoC Voltes V and feel like an idiot. Voltes V is a freaking feat of toy engineering and I got it in all it's diecast glory for less than half of what I'm shelling out for Matty's Voltron. I read a post on Matty's FB page going berserk over the price increase from $22 to $25 dollars this year. I'd kill to get some Figuarts or Myth Cloth at $25 bucks plus shipping. I'm not saying I'm better because my toys are more expensive but I think some of the Matty buyers don't really know what else is out there. I'm with Atom though because I am dumbfounded when I see these massive rants that end with "Will Matty put out a Vehicle Voltron?" WTF! Matty can't get 5 lions right, and they want a 15 piece robot?

well this is what happens when the vast majority of collectors say "Meh ill still buy them anyway"
to price increases, let serious QC issues slide, and keep questioning nothing. Pardon me sir can i have another!
Thanks for doing these review atom and saving your readers a lot of money.

"I read a post on Matty's FB page going berserk over the price increase from $22 to $25 dollars this year. I'd kill to get some Figuarts or Myth Cloth at $25 bucks plus shipping."
What you have to keep in mind though,is that a Matty customer isn't getting a Figuart for $25 dollars,they're getting a MOTU figure. Now,like you said,they aren't BAD toys,but they really are something that should be like 12-15 bucks at my local TRU. Even then,TRU would want the forearms to be installed correctly. :)

Meanwhile TRU charges 30 bucks for a Figuarts figure. Granted I like the MOTU characters a lot more than the PR Samurai characters,but look at a Figuart and look at a MOTUC. For roughly the same price,one of them is WAY better. That's the problem people have here. This green lion would be fine for 20 or even 30 bucks,but at 50 bucks just does not cut it. The Matchbox toys were better,and that was 30 years ago!

Now imagine this same company putting out seperate Dairugger vehicles. Come on. It's like giving a monkey a potato and a butter knife and thinking he's coming back with "The Thinker".

I suppose there is one thing about this whole Mattel subscription thing I can be happy about. At least the Voltron sub is strictly the pilots and lions to make Voltron. I can't imagine how bad it would be if the Voltron line was all inclusive like the MOTU line is with He-Man, She-ra, New Adventures, 2002 He-Man, mini-comics, and concept characters. We know this line is basically one-and-done with one full Voltron. Imagine one month getting a lion and the next time something gets shipped it's something like Haggar's cat. For 15 bucks.

Is this series base on the Toynami design and mold? Aside from the cockpit are the articulation and design pretty much the same?

I luckily got a good Green Lion set however the door design really bothers me. I grab the lion from the body and the doors just swing open, lock be damned. The hinge geometry was horribly designed. I'm surprised they didnt run into that problem during CAD design. Pidge looks like someone you wanna just punch in the face.

I still have hope for a great black lion...

Mine sits high but not as much as yours now that I had a chance to compare. You have such luck with your pieces

At least they got the right shade of green (a peacock green) over the Toynami and Trendmasters (which was a kelly green).