Although the prospect of a giant 16" Gort vinyl was appealing enough, what really excited me was when I heard that there would also be a collectors set featuring both Gort AND Klaatu. Both characters come from the 1951 sci-fi classic, "The Day The Earth Stood Still" and are available now from Amok Time Toys.

Witness their arrival on Earth!

The Gort and Klaatu Limited Edition Collectible Figures come packaged together in a large (18" x 16" x 5") box and the figures are showcased on the front and sides of the box. You can open the front lid and see the figures resting inside as well as a closeup of the head of Gort on the back of the cover. 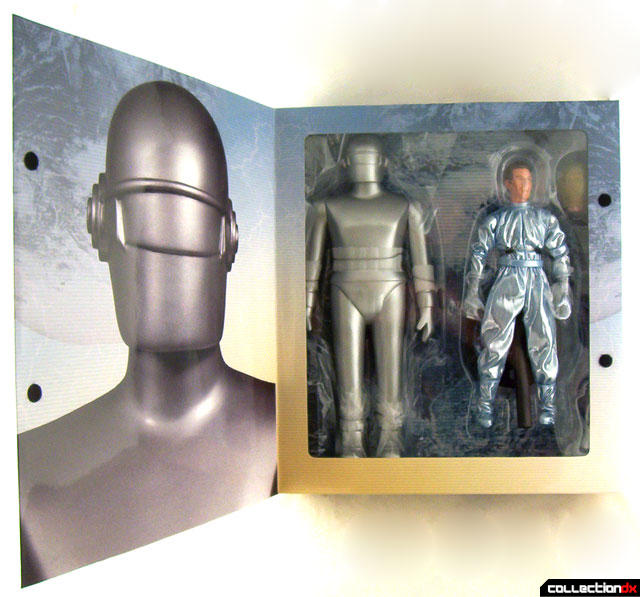 Both figures as well as accessories rest inside a plastic tray and are secured by plastic ties. The Gort is the exact same toy that was previously reviewed so I'll focus a bit more on Klaatu here.

Klaatu is a standard 12" doll and features a wide range of articulation. Of course, as you saw in the clip above, the character is a rather stoic sort and so you're not likely to place the figure in too dynamic a pose. But you can if you want to. The costume is really cool with a shiny blue/silver that really looks like something a spaceman would wear. Or at least what we would have thought a spaceman would wear back in the 50s! The fabric gives the impression at times of being either see-through or reflective, and yet it is neither. 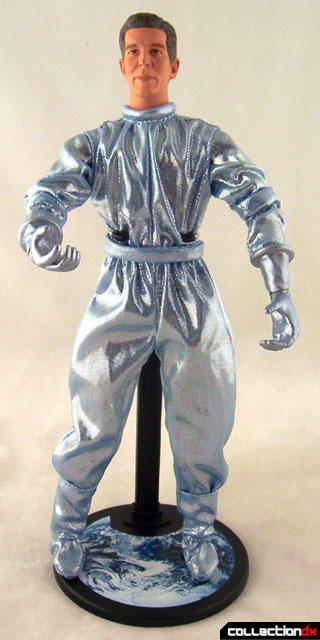 The suit extends all the way down around the feet and can be tightened at the ankles by a strip of velcro. The belt is a separate piece and should you need to remove the costume for some reason, there is a zipper down the back. The gloves are cast in silver plastic and are non-removable. But the figure is able to hold it's accessory, the gift that Klaatu was to present to the president before the soldier with the itchy trigger finger shot it.

This is a big, BIG plus for me. If you've read my 12" figure reviews in the past, one of my pet peeves is figures that can't hold what they come with, often because they re-use the same hands from other figures. I know that doing that might help keep costs down, but I think it's worth the extra money to get a unique mold that works with it's parts.

In addition to that hand-held accessory, Klaatu also comes with a 2-part removable helmet and and extra head. The reason for the two heads is so that one can have a regular hair pattern and the other with the hair flattened down to fit inside the helmet. Both heads are beautifully sculpted and feature an uncanny likeness of Michael Rennie, the actor who played the character, but be advised that they are a very tight fit and a bit difficult to swap out. You'll definitely want to be getting out your hairdryer to soften up the plastic on the neck before changing them.

If you look at the pictures above, you might notice a sort of collar around the neck of Klaatu. This is a nice touch that allows you to snap the helmet together over it so that the suit is not sliding out from under the helmet. I think this is a minor, but very important thing. I know it would drive me nuts if I had to manually try to get his shirt under the helmet.

Klaatu also comes with his own 12" doll stand with a sort of satellite image of Earth on it. 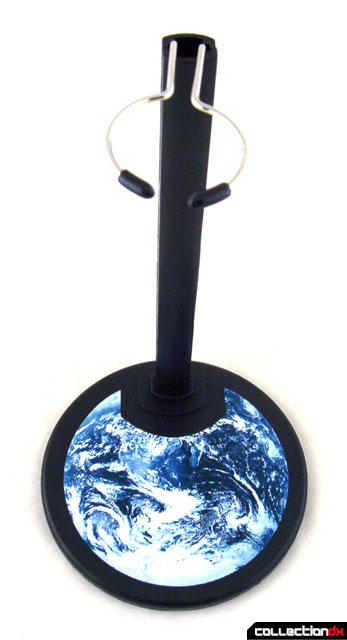 The Gort and Klaatu Limited Edition Collectible Figures are a winner, and in my opinion, a very good value at only $109.99 for both. You can get them at Amoktime.com. Now, all we need is a giant flying saucer to display these guys in front of!

9 comments posted
Will they be coming out with

Will they be coming out with a Keanu version?

Let's all collectively pray that they don't!

Well hopefully if you play your cards right at the movie theater,you'll kill two birds with one stone!!

Seriously though,did you see the trailer? This may be the worst remake since Godzilla.

Well, ya bastich, ya peaked my curiosity...and I watched it!

You're absolutely right: this looks so damn horrendous, it may actually top the American Godzilla movie as the worst remake in history.

My father's pretty excited about that little half-a-second clip of Gort's eye-beam near the end of the trailer (he even had me take a screenshot and print it for him, to show one of his friends at work).

BUT, he's also very worried that they're going to screw up Gort something awful. He fears greatly that they will ruin the simplicity of his form.

Not having seen the original, I won't be able to say which is a better movie, but it'll still piss me off to see a classic ruined. Especially one of my dad's favorite movies.

As for something good about the trailer...I really like the music. Heh.

Bah! You guys are all too cynical. The trailer doesn't look that bad. I'm willing to give it a chance.

Oh, I agree it doesn't look like that bad a movie. It looks pretty cool, in fact! But you know there are people out there who, even if it's the greatest movie ever made, will hate it because it's not an exact copy of the original...

Me, personally, I'm not like that. Example: I really enjoyed the new "Transformers"!

My father loves this movie and he wants these figures, however he doesn't dare spend that much money, for fear of what my mother would have to say about it! I'd help him out and get them for him, but that's a lot of money for me, too.

Thanks very much. I'm glad you liked it and it's neat to hear that you're dad in interested in them! I say you guys need to go halves on it. ;)