There is always some commotion going on in the land of robot collectibles. Some robots rise to the spotlight while some sit back and sneak their way into our collections. This Goraion is one of those figures that just snuck in under the radar. While everyone was getting their panties in a bunch over the Miracle Productions Vehicle Voltron, a small company called TongMeng was whittling away creating a Super Deformed (SD) Lion Force Voltr...I mean Goraion. Not Golion...GORAION. That's right, it's pronounced with some Engrish.

Why? Well it's not licensed. It seems TongMeng didn't want to deal with all the mess associated with licensing the Voltron name so they skipped it altogether, even skipping the Golion license and jumping on the Third-Party boat where it seems licenses aren't needed to make well'known figures. While its unmistakeably Voltron/Golion, TongMeng played it "safe" and made a couple of little teeny-weensy changes that keep it from being exactly the way Golion was designed. Is that enough? I don't know. But who cares? They surely don't. They even label it as "Defender of the Universe".

All that aside, TongMeng has done a really good job on their first release. (is it the first? Is this just a sub-name for another company who already makes toys?) The box borrows heavily from the popular ES Gokin line which is also a line of Super Deformed figures. It's as thick, if not thicker (but not as rigid) as the ES Gokin boxes. The graphics, while not as bright as the ES Gokin, still display a rather nice layout with nice fonts and foil "Goraion" emblazoned on the front. While the picture of the figure on the right looks nice, the close up of the head on the left looks out of place and not as sharp as the rest of the pictures. If you care about that stuff. 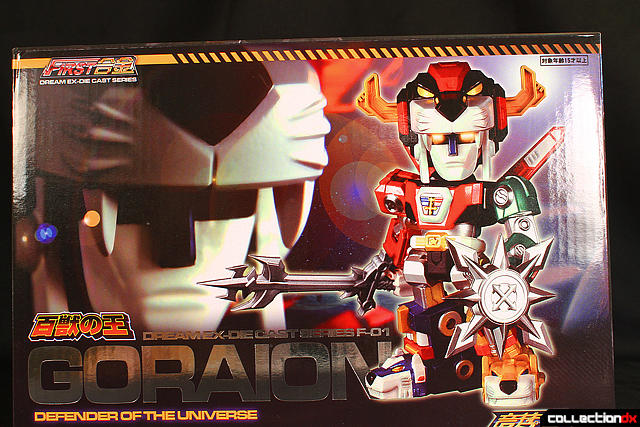 Whatever colors were absent from the front appear on the back which sports a livelier look while giving us a glimpse of its articulation and included accessories. 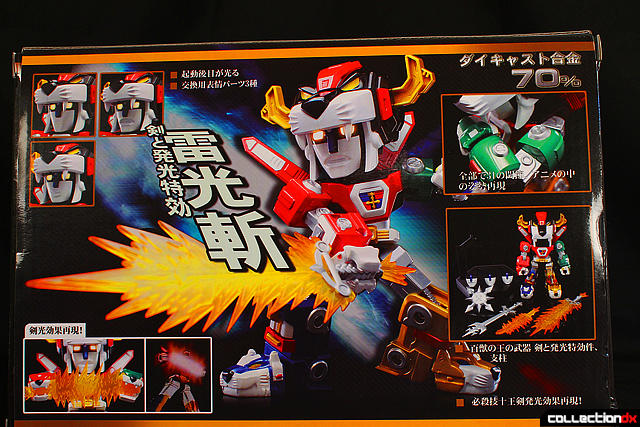 Inside, no surprises here. It's a standard plastic tray and an instruction booklet. 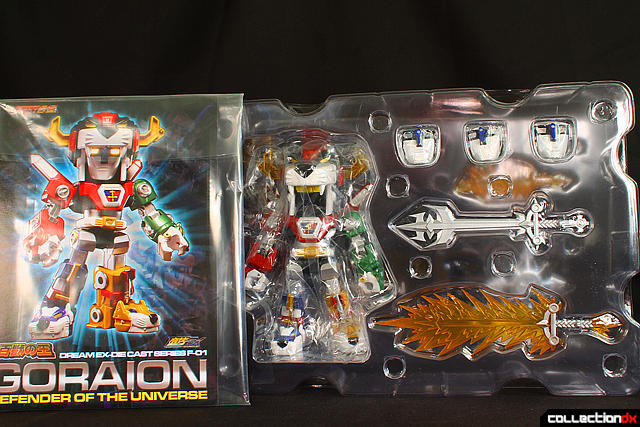 Handling Goraion out of the box was pleasant. He felt nice in the hands. First thing you notice is a lack of a face. Then you say ooh and ahh at the nice metallic paint. 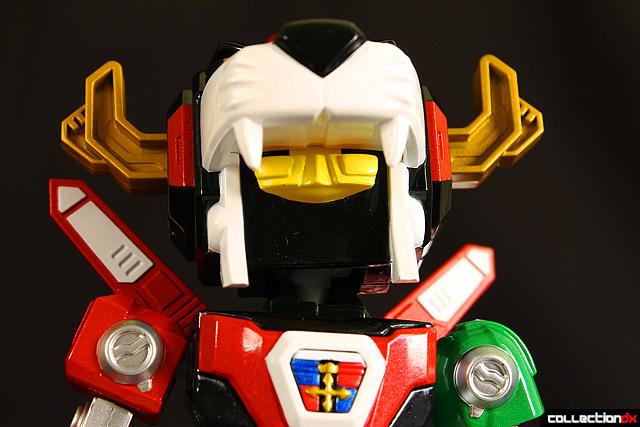 You get to choose from three faces. I prefer the standard one. 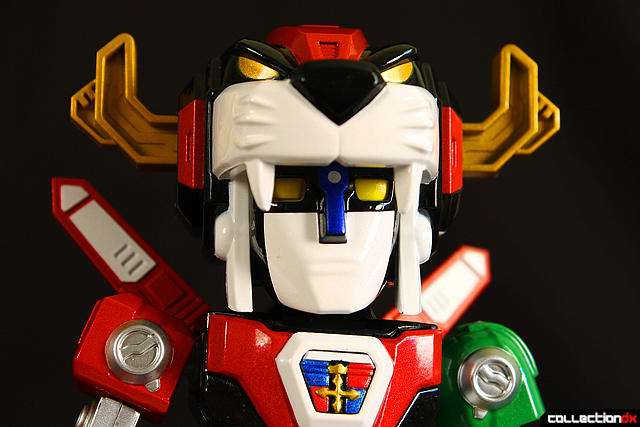 If you want to have a little more fun, you can try this open mouth version. 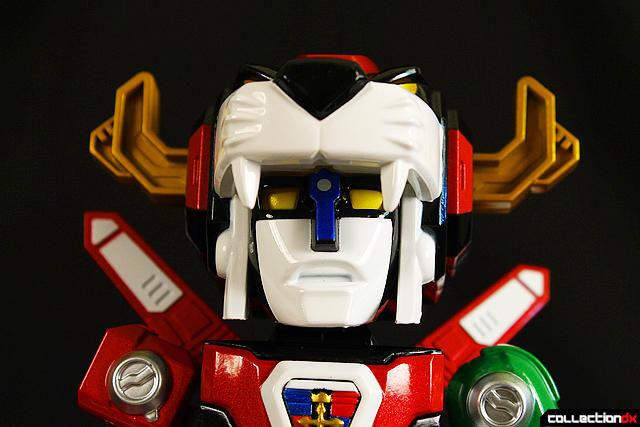 Now this is one is just silly. 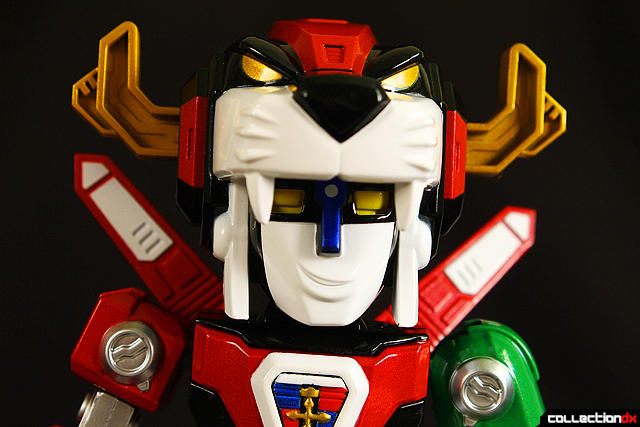 So now that we've chosen the face we want to use, we can take a closer look at the figure. They've done a good job at creating an SD version of Volt..uh I mean Goraion. Of course a few changes had to be made to keep it from looking like that other robot we know as Voltron. You'll notice some features which differ from that other robot. Notice the ears have a hollowed-out effect to them. The wings on his back also come to a triangular point instead of a wedge shape and have some panel lines. The chest crest is also slightly redesigned. 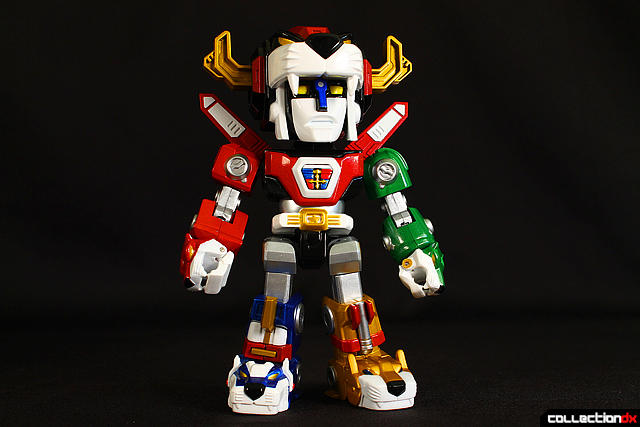 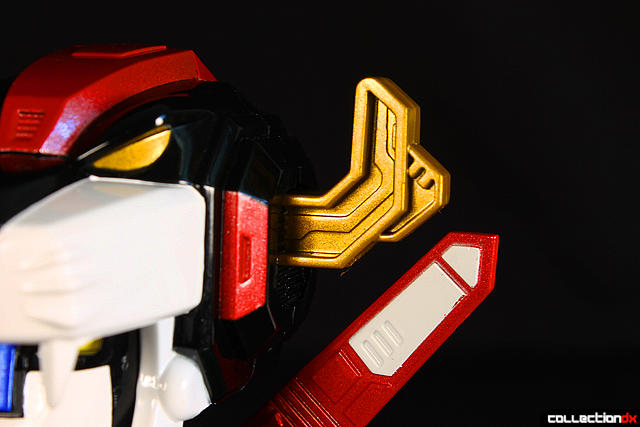 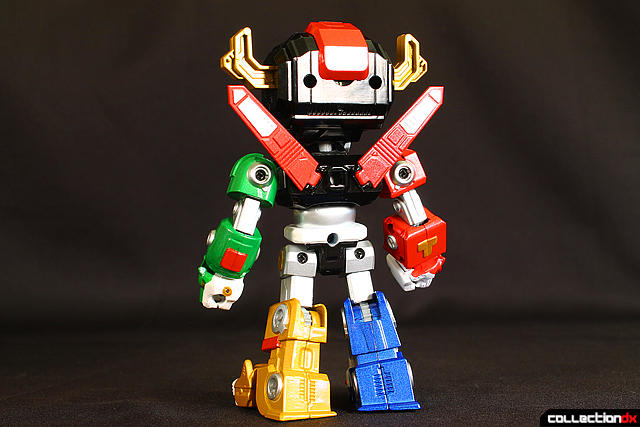 Because Goraion will spend all his life in robot mode, there is no need to sculpt in lion legs on the individual lions. The only remnants of lion legs are the small round bits finished of with little nubs to hint at folded legs. 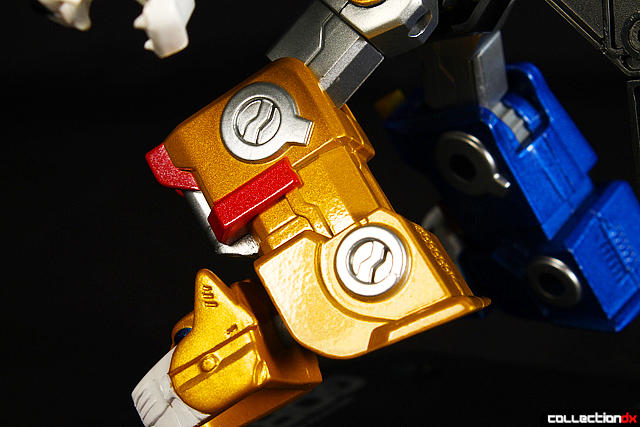 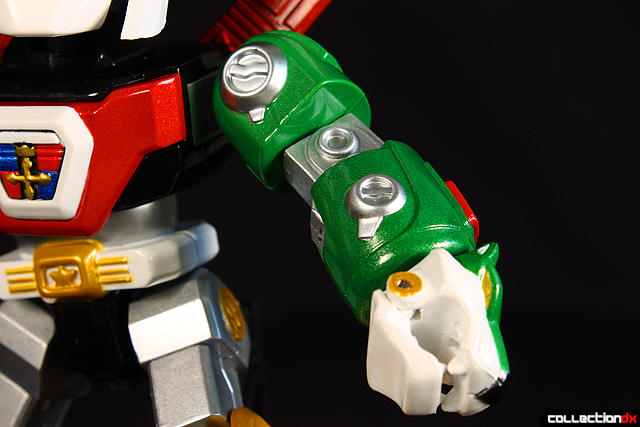 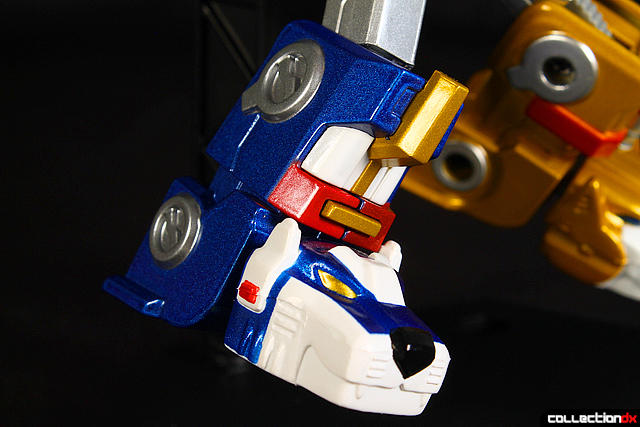 One of the compromises SD figures have to deal with is limited articulation. Goraion surprisingly doesn't suffer much in the way of limited articulation. There is an upper chest joint which gives it a good amount of freedom in the middle. Goraion's elbows and knees are ratcheted for your pleasure. 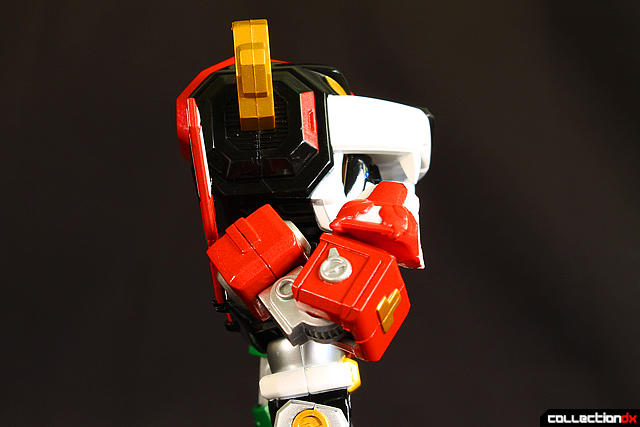 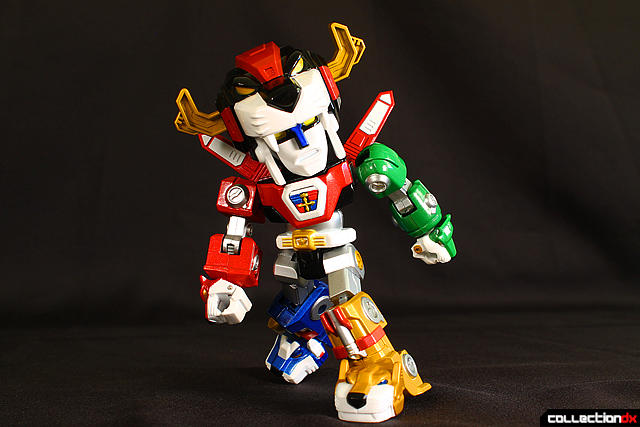 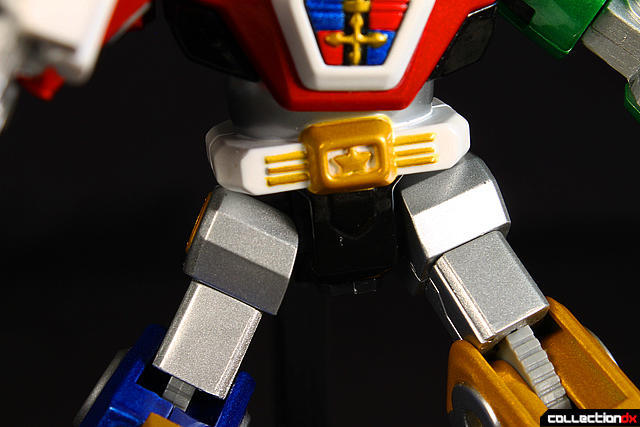 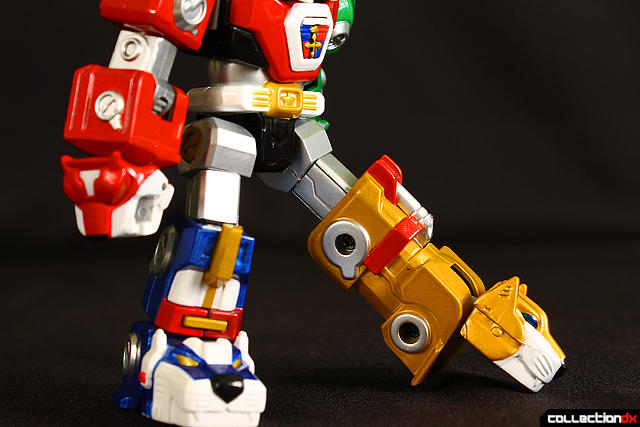 The feet and hands are also articulated. As expected, the hand lions have articulated jaws. 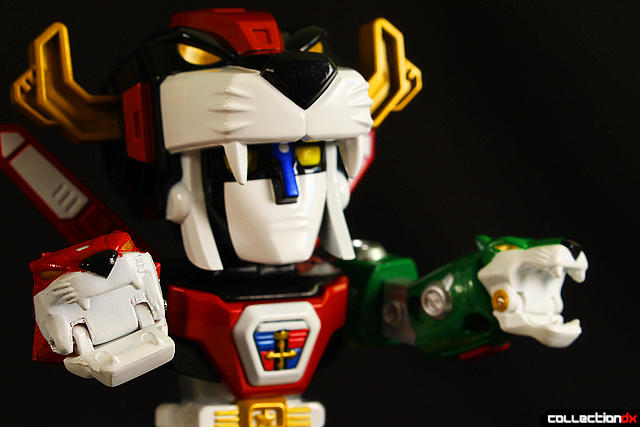 Seeing as this is a Gokin, there is metal to be found. So I've put together this small video to show it off.

So what else do we get with this set? Well, we get some weapons! "FORM BRAZING SWORD!" 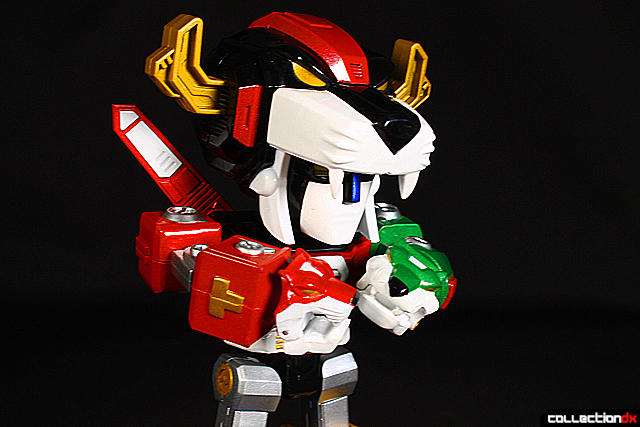 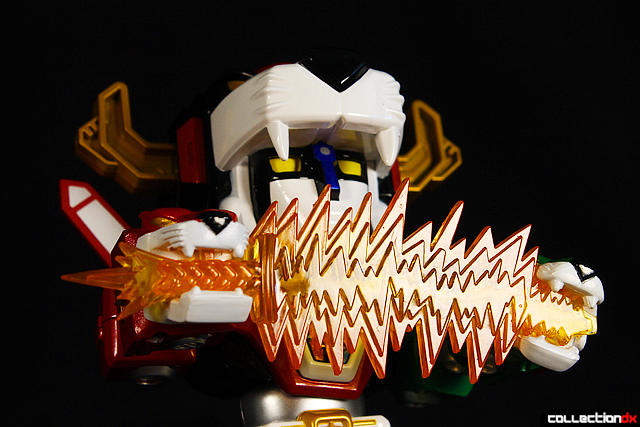 Aside from the forming effect, we get a fully blazed sword which tabs into the hand lions. 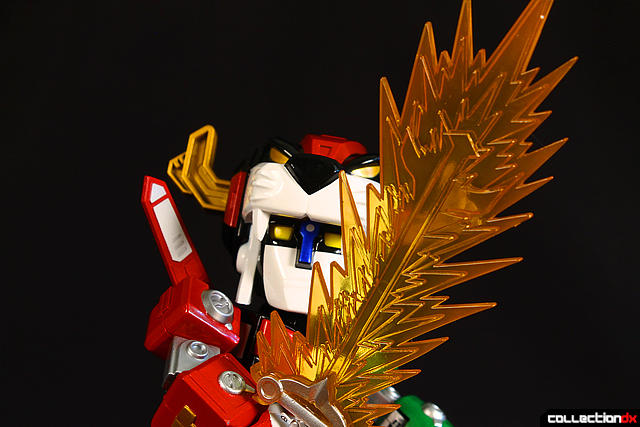 He also comes with a standard Brazing Sword and Shierd. Both of which are well sculpted. 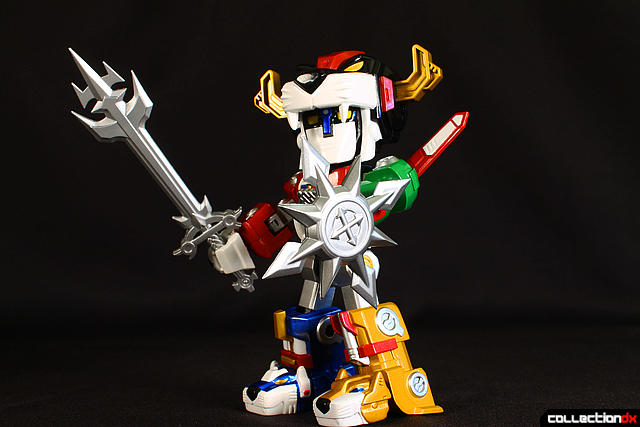 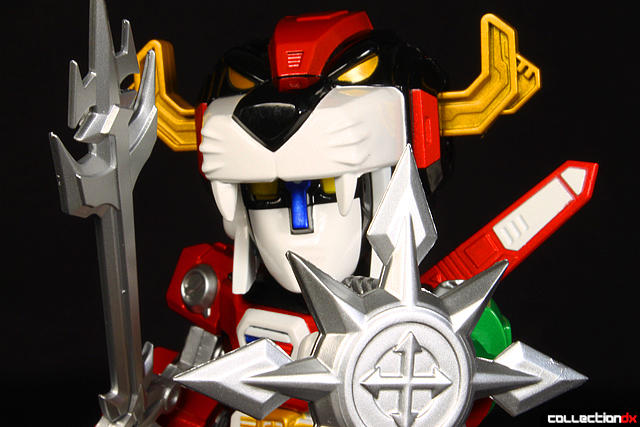 Now what happens if you want to display him in a floating fully armed pose? Well duh, you use the included stand of course! The stand proudly and maybe embarrasingly displays the Goraion name depending on whether or not you like the name. 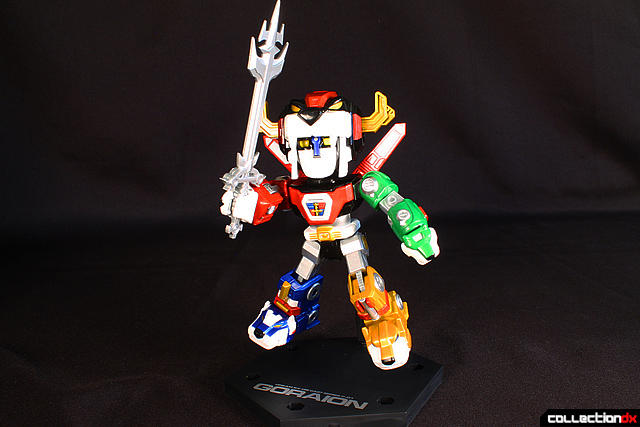 The stand arm securely pegs into the back of Goraion. 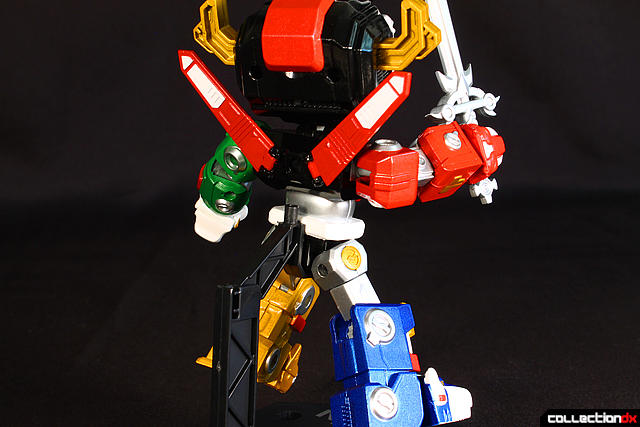 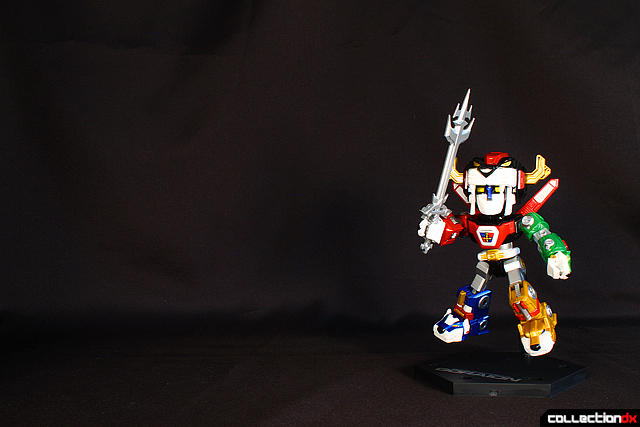 For those of you that have never seen the Invisible Jet in person, here he is next to a Snapple. 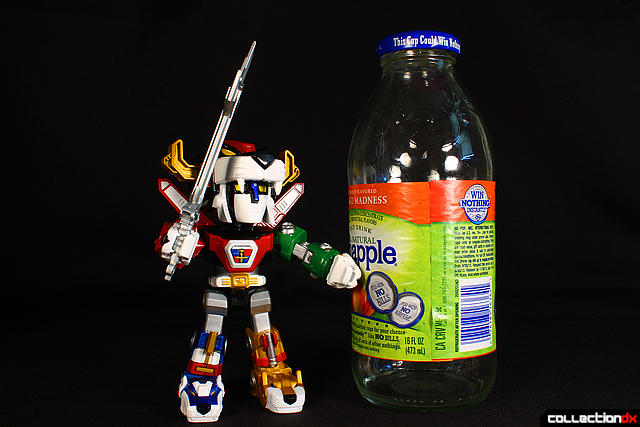 I can hear you guys screaming "WHAT ABOUT THE LED FEATURE?" Well guys unfortunately I can't get it to work. Is it the batteries? Is the gimmick broke? Is the yellow paint too thick on the eyes? I don't know but I will be getting new batteries to test out. If I get it to work, I will update this review.

Some of you are asking how to get one. Well you're not going to find it at major retailer's due to it's non-licensed nature, but you can always hit up auction sites or look to Asia to get your fix. While it's not exactly SOC quality, it is a nice release with nice clean metallic paints, great articulation. If you prefer a Vehicle Voltron, Tongmeng is working on one too! I think it's called Dailugger. 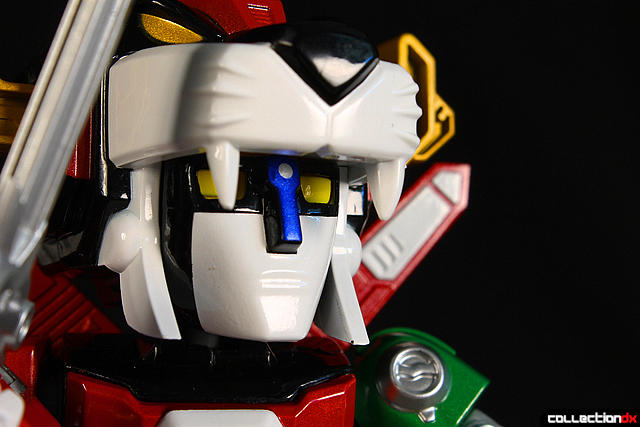 5 comments posted
ya know, if this was made by some of the third party TF guys

ya know, if this was made by some of the third party TF guys, it would probably have lion legs... and stow them away in cleverly hidden compartments for cartoon-accuracy... because it would transform ]:3

Sounds like someone's thirsty for a cool, refreshing baggie of screw hole covers.

That forming-Blazing-Sword effect looks really good. Has any other rendition of Golion included such a thing? It seems like it would look a lot better on a normally proportioned figure...

Well, sure, that's helpful, I guess, but how many tape measures tall is it?

I can hear small voices shouting:

Seriousness, this is a nice looking figure. Great review!

This would be a Perfect 10
if it transformed
Its a must get if your a Super Voltron fan in my book.

Why we can not get an official licensed product like this in the States.
Just shows the people who run most toy companies are Idiots
Thanks
for the review