Even before I got into robots, I was a fan of Godzilla. I would sit home on Sundays as a kid and watch old black and white monster battles and Godzilla was always my favorite. Funny thing is I never had any Godzilla toys. Robots eventually creeped into my childhood and Godzilla was slowly pushed to the back of my mind. Fortunately, Godzilla is still readily available in major stores. More recently, they have been lowering the prices and placing them on clearance due to slow sales. After all, these are boring toys to the uncool masses. Because of this I was able to pick up a few Godzilla vinyls. This vinyl is based on the 1968 Godzilla, Otherwise known as Soshingeki (Attack)-Godzilla, as seen in Destroy All Monsters (1968), Godzilla's Revenge (1969), Godzilla vs the Smog Monster (1971) and Godzilla on Monster Island (1972). The suit used in the movie is referred to as Suit 7. The toy comes in a cardboard "basket" which has a black and white movie background and red Godzilla graphics. The toy is held in with zip ties. 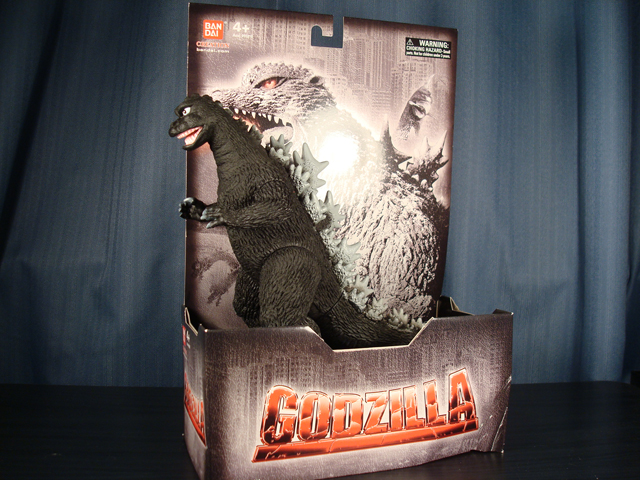 Here is our friend Godzilla.

It's a very simple figure. The only articulation you will find is the arms, legs and rotation of the tail. If we take a look at the face up close, you can see that it is a faithful small scale reproduction of what you see on-screen. Although meant to be a cheap plaything, in my opinion, they did a good job in the sculpt. The interior of the mouth is painted a soft pink with individual cream accents for the teeth. 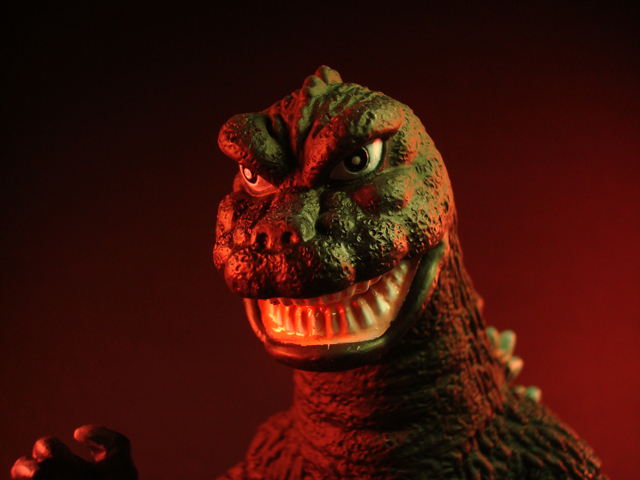 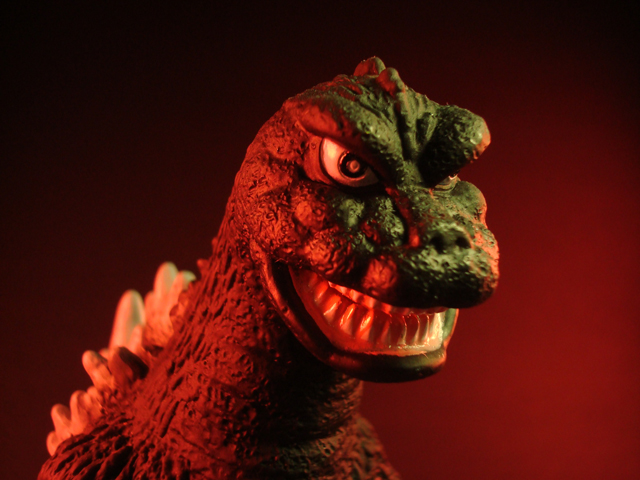 Here is what he looks like from the side. Take a look at those wonderful dorsal plates. 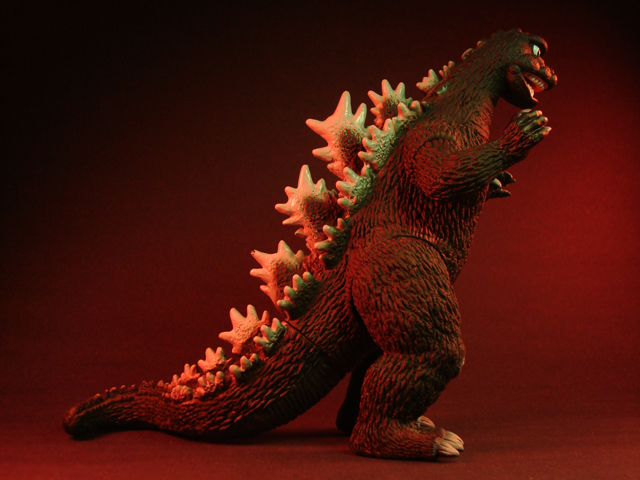 You can see the plates have a very simple but effective paint application. The sculpt detail is very nice. Notice how they work in the texture to the sides of the dorsal plates. 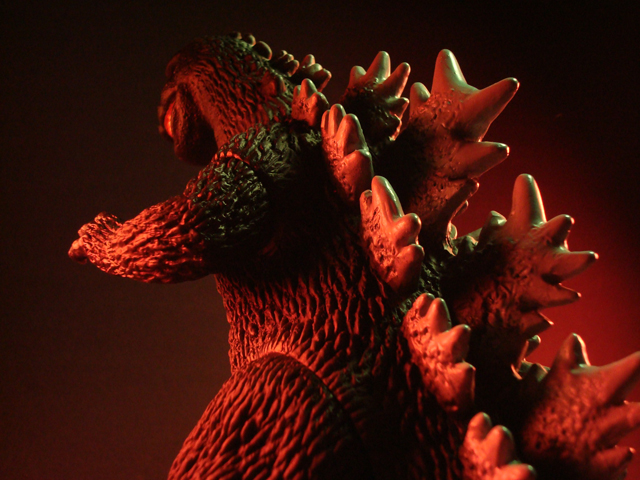 Speaking of texture, let's take a close look a the skin texture on this little Godzilla. It is similar to what you would see on screen. It looks very rough and matte instead of smooth and shiny like on other cheap Godzilla toys. 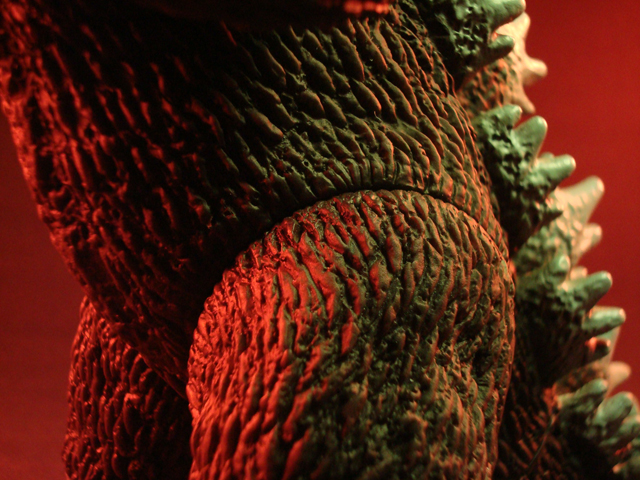 Now, it may just be the randomness of the sculpt's texture, but surprisingly, this sculpt seems to have suit holes that were necessary for the actor inside of the suit! Very nice touch and ultimately not necessary for a mass produced toy aimed at kids here in the US. I admire their attention to detail... or it could just be a coincidence. You decide. 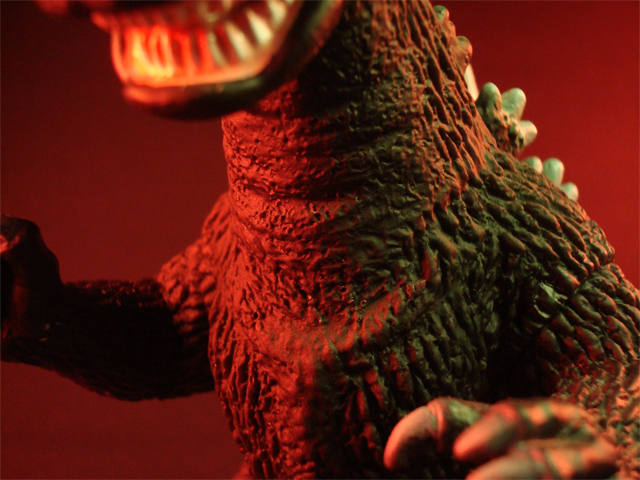 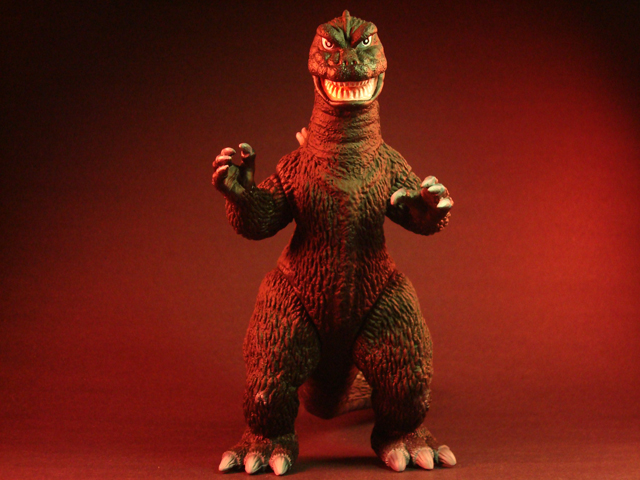 Here is a shot of Godzilla under normal lighting. 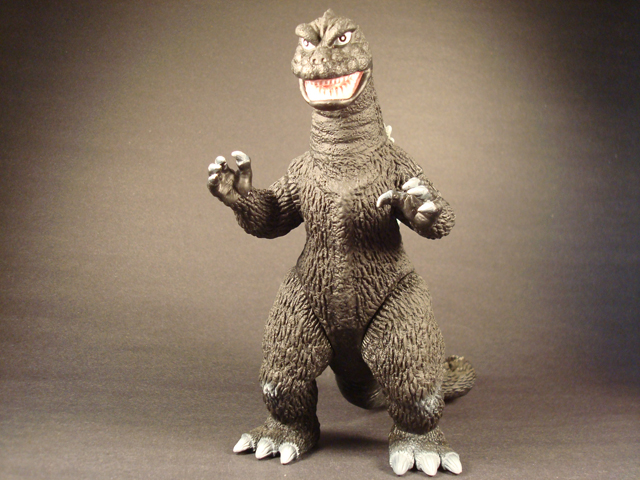 Bottom line, it's not for everyone. It's not very articulated, probably verging on being a very boring toy to most. However it is Godzilla, it will take a beating, it looks cool on a shelf and it's cheap. I imagine that most people, including kids, won't understand the coolness of this toy unless they have it in their hands and take the time to appreciate it for its simpleness. Check out the Japanese market Godzilla 1968 Standard review by JoshB if you dig this one.

8 comments posted
Looks good to me.

Looks good to me.

I have this figure myself bought it for super cheap along with the Smog Monster in the same line. Both are great looking inexpensive Godzilla figures. There was also a 1954 Godzilla released in the US that was really nice looking too. Not sure of the actual year it came out but it says 2002 on the bottom of his foot.

Anyone know if this line is still going in the states or did they put the kebosh on it?

I'm not sure but I remember Kay Bee was going out of business and they had these vinyls on the table. Everything else in the store was pretty much sold, yet these figures lingered til the end with 80% discount. I didnt buy em. However I ALWAYS saw these in TRU and they basically never moved. Then when I decide to buy them, they start disappearing. I had the chance to buy the smaller Mechagodzilla and I'm like "nah" it'll be there forever. WRONG..it was gone along with everything else.It wasnt even on sale. All that was left was Hedorah (Smog Monster)

This toy line was not super popular nation-wide when it launched in the US (I think it was 2004-2005) - but here in NJ they were pretty difficult to find for a number of years, up until this wave with Smog Monster and 68 Godzilla. It was pretty regional, I know Toys R Us stores in the south were having their shipments sent up to the east coast to fill demand.

Bandai made these really, really cheap by the case for stores, so retailers made a nice profit on each figure, even at clearance, and US Godzilla fans didn't have to import their vinyls. I wish they would do this with more toys (slightly dumbing down the Japanese release, but making it cheaper as well!!

What ends up happening with Godzilla toys at mass retail is that they make the US packaging as ugly as possible, and make the 1st waves almost always all 1990's-2000's Godzilla characters (only the hardcore really know those 90's-00's films), and people in toy stores pass them by. Then, someone on a forum posts that they are out and available, and cool and cheap, and they sell out. The cycle repeated itself with almost every wave.

This is a really awesome release. Don't skip this cheap fun now, or you will be disappointed when you want one in five years and have to pay out the nose. Actually, you can buy these for so cheap on ebay nowadays it's crazy.

No smaller vinyls restocked recently but I have seen TRU put out the 12 inch assortment with Gigan. These are really excellent.

This is a great toy line that I got my nephew addicted to for a minute. I see these at the fleas, too, so it's definitely something kids are digging, even if it doesn't blow up like Bakugon.

I never expect to see anymore and then they just appear, is there a website?

These are available right now through Diamond, so hit up your comic shop if you're having trouble finding them.

I love love love this toy. I have the whole series except oldschool MG,and I'm only missing him because I couldn't find him.

True story=when the first wave of these came out,I was unemployed. I would always get to KB too late,and find them already sold out,so I got a job there.

BTW,I haven't been on here because I just got married,and I son't have internet yet,but I am trying to keep up with the site sporadically from other people's computers.