This Godzilla represents how the legendary monster appeared in 1964, which is also known as MosuGoji. It was the fourth variation of the suit and possibly one of the most iconic. 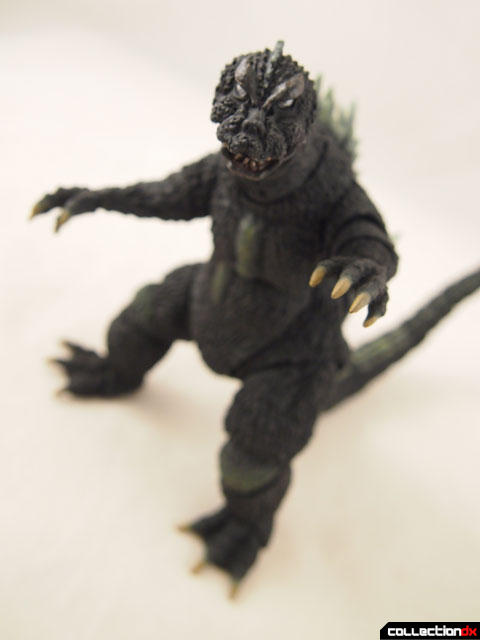 Bandai released this S.H. MonsterArts figure as a Tamashii Web Excluisve in Japan, but in the states, Bluefin offered it as a regular release.

The toy ships in a plain brown box which is what they are mailed in to consumers in Japan. Inside is the normal box. 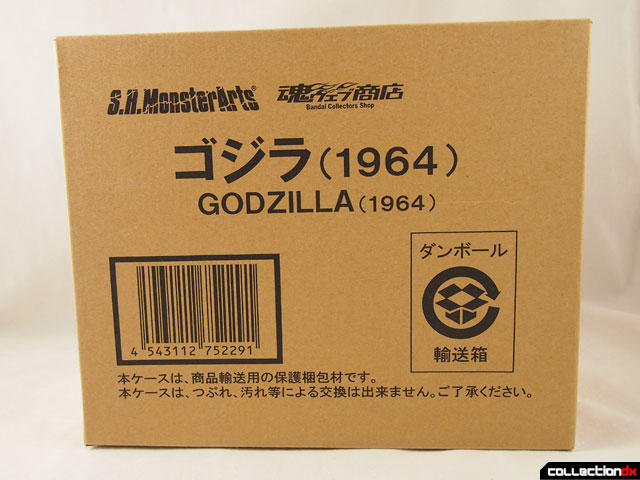 The box is a lot simpler than the other releases, probably because as a web exclusive, there was no need for the flashy packaging required to catch a buyers attention when on the shelves. It’s a bit of a disappointment. 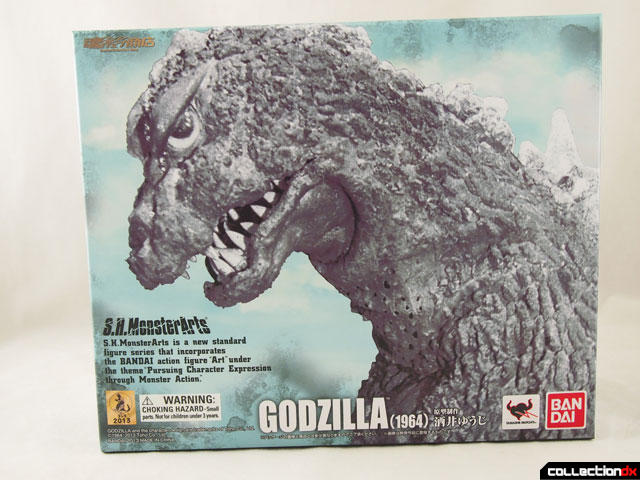 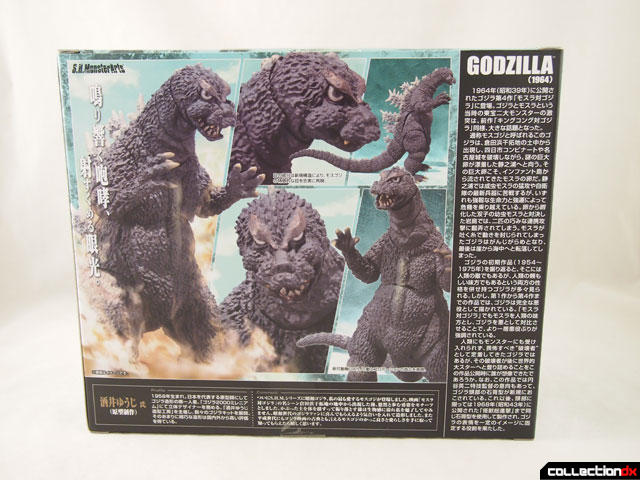 Inside, the toy continues its barebones approach with no instructions and no accessories. I know I tout the simpler toys as a welcome change, but this takes it a bit too far. You get the figure, and that’s it. 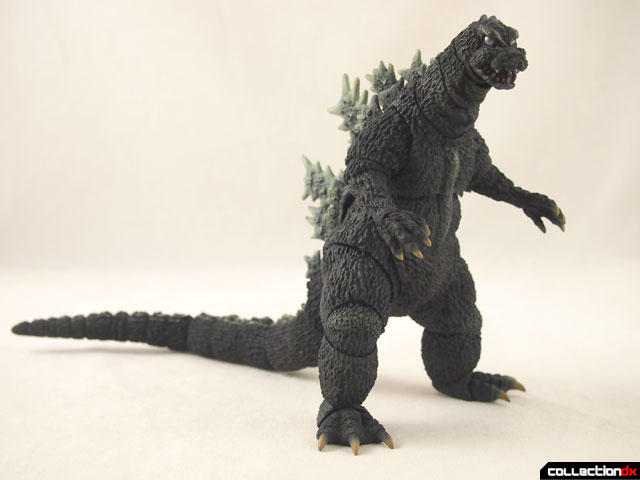 Godzilla 1964 is reasonably nice looking and accurately depicts the slimmer sculpt from Godzilla vs. Mothra. 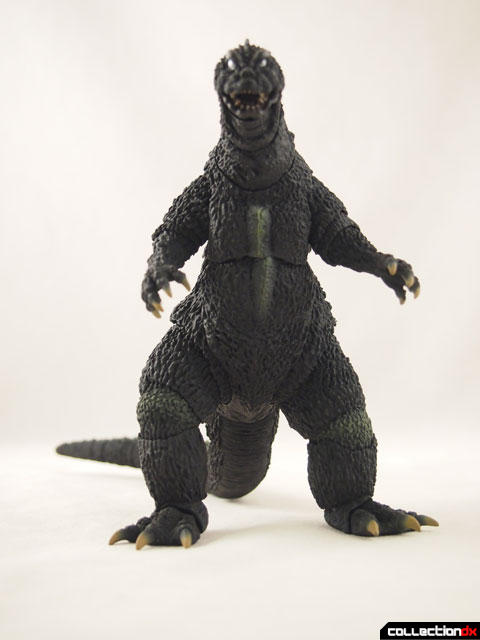 Like all MonsterArts, Godzilla is articulated like crazy but is limited by the nature of the figure. I found myself frequently pushing the joints to the point where they popped out, wanting just a bit more movement. 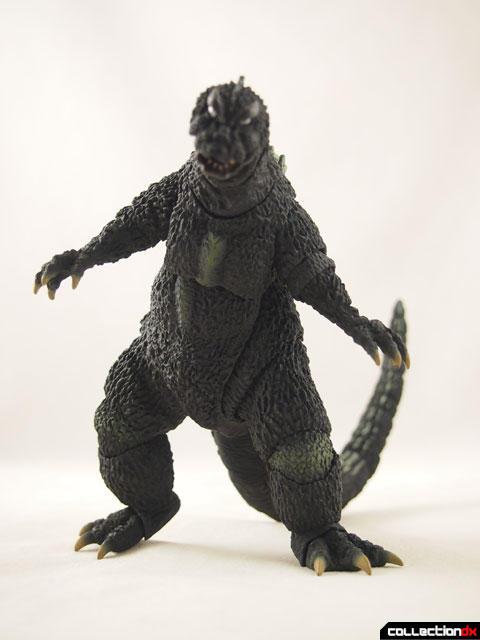 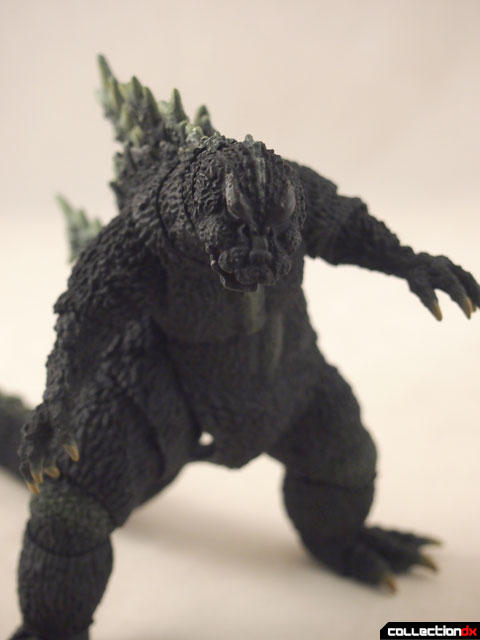 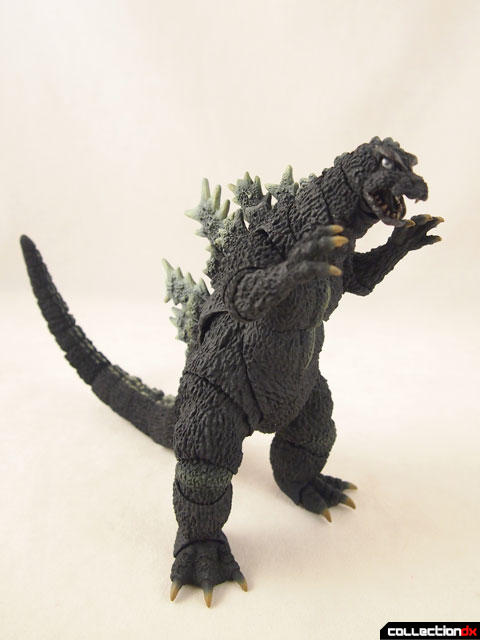 The neck has multiple segments that move smoothly, although I wasn’t sure one of them was a joint at first or just a seam line. Overall it looks good but there’s a bit of excess “skin” under the mouth that looks wrong unless posed just right. 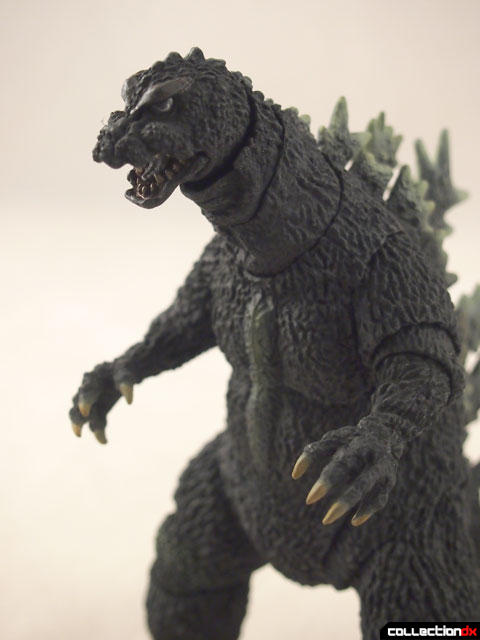 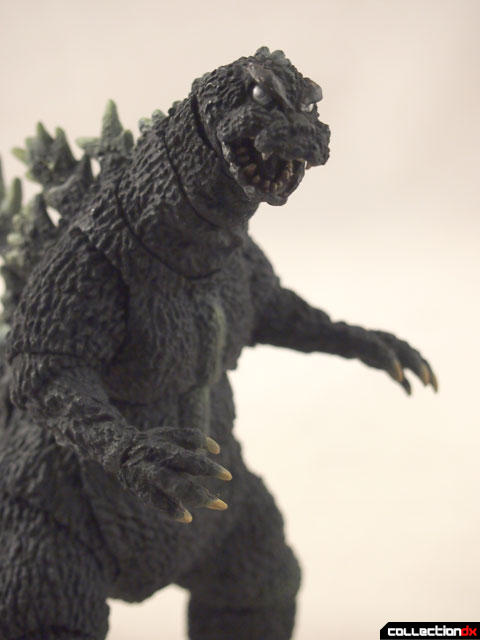 The head is nicely sculpted with an opening jaw, but there’s something odd about the eyes. The pupils aren’t right somehow. 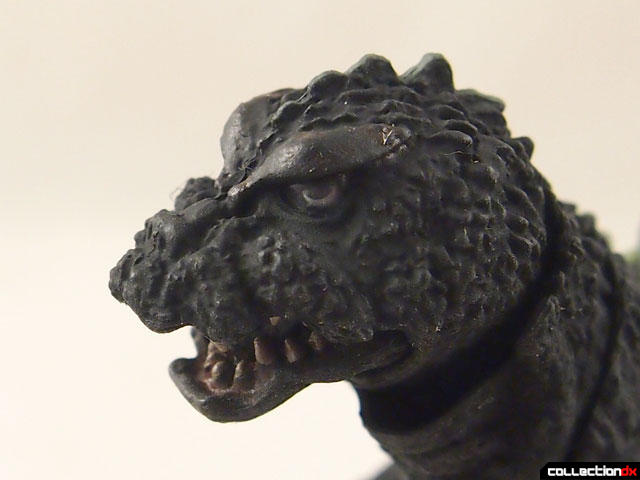 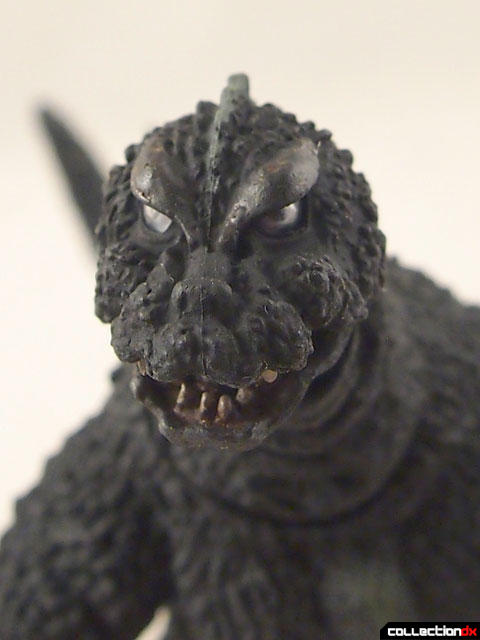 The arms rotate and bend, and the hands swivel on ball joints. 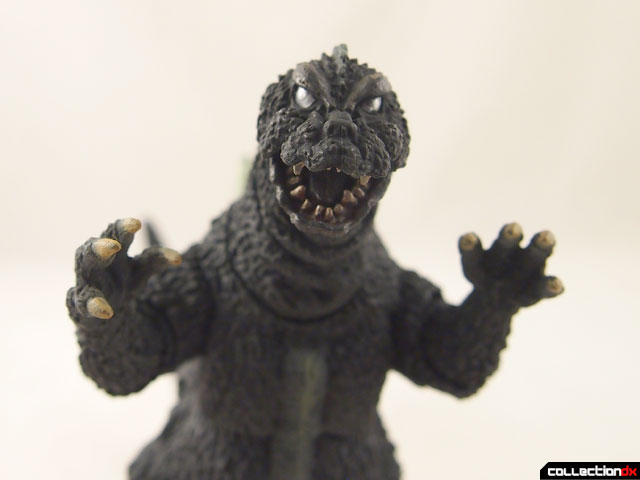 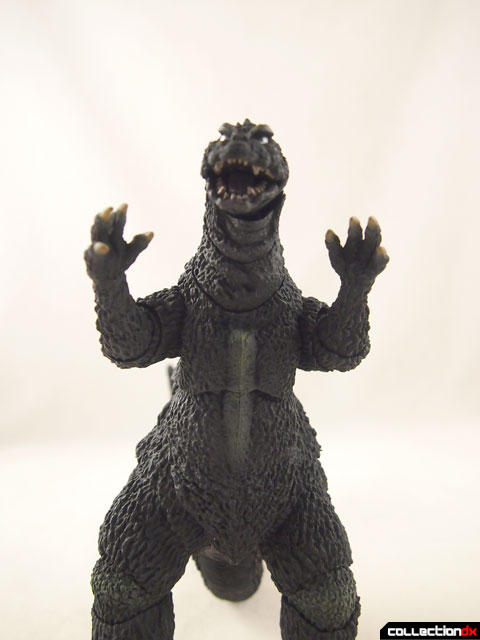 You can get some good width on the legs due to double hip joints, but the double jointed knees don’t move much at all. The same can be said for the feet. The ankles move well, but the hinged toes hardly move. 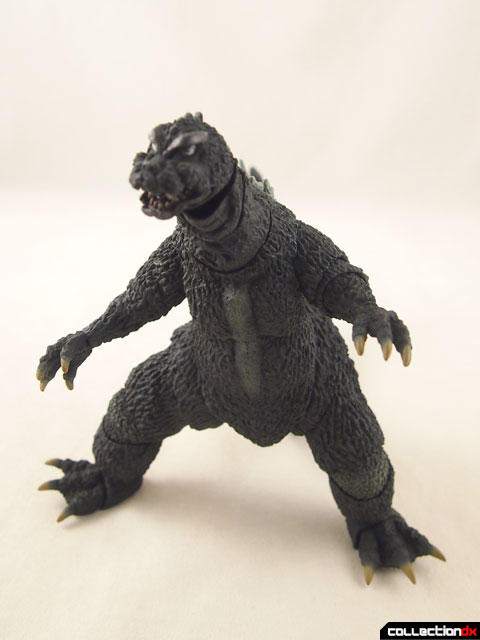 The tail is absolutely fantastic, with almost every segment being jointed. 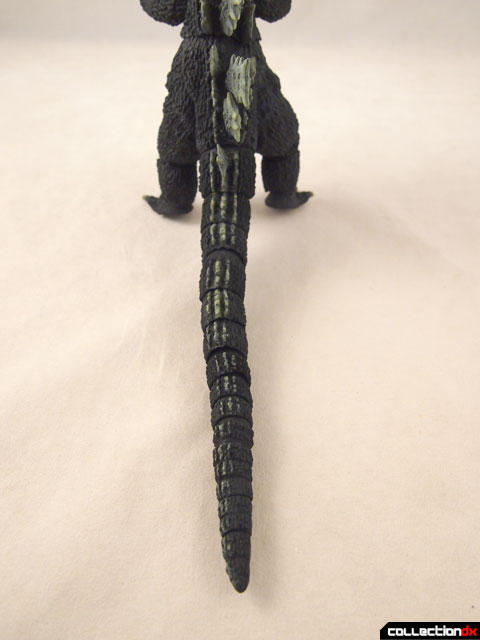 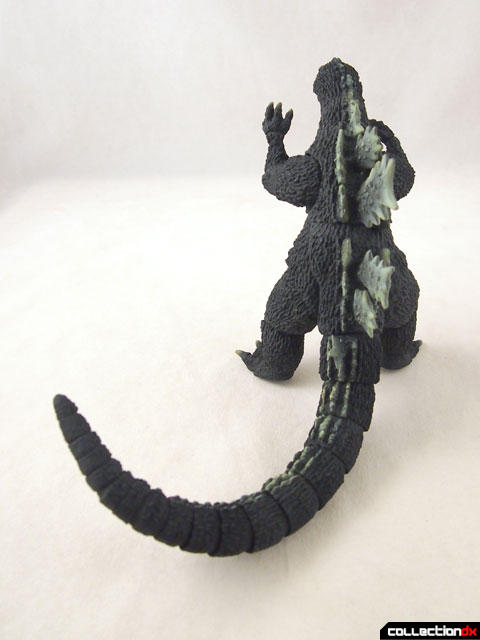 The spikes on the back look good, but when you make Godzilla crouch a little the gap between back fins widens and looks awkward. A third segment would have alleviated this. 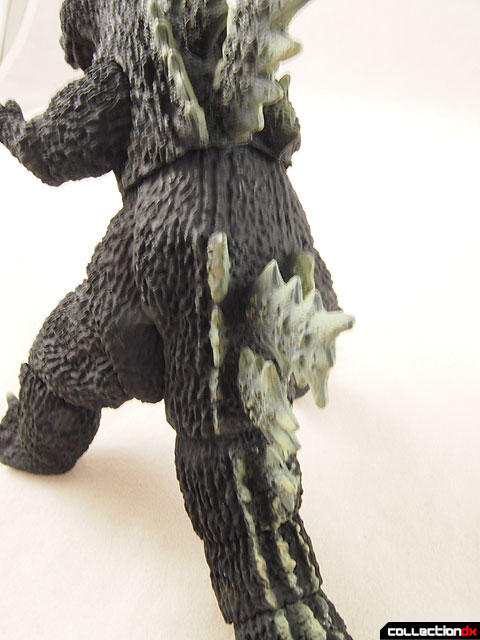 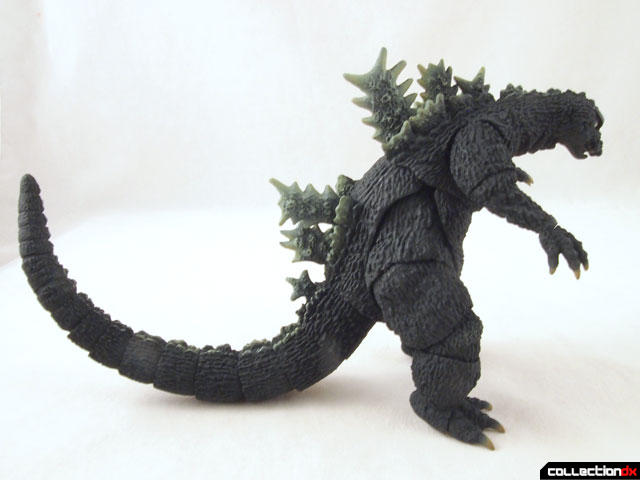 If you look closely, you can see small bits of clear glue where the fins attach to the back. It’s not terrible, but not something you usually see on Tamashii product. 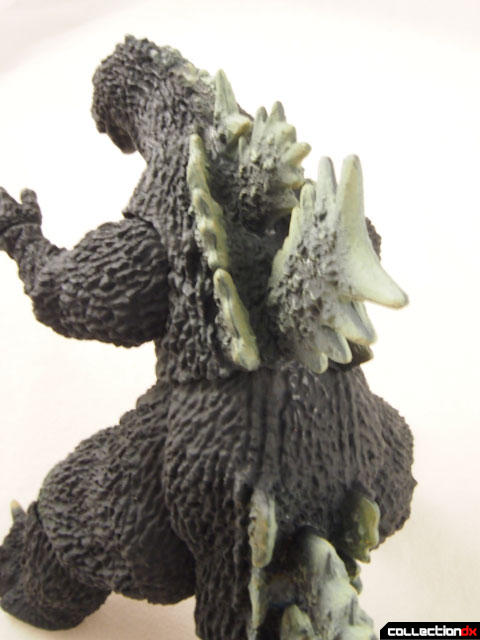 Godzilla 1964 is a decent figure, and I like the fact that the S.H. MonsterArts line is doing classic kaiju. However the lack of accessories and a few questionable design decisions keep this from being a must-buy, especially at the $65 price point. Hardcore kaiju collectors will enjoy having this in their collection, but those looking for a simple Godzilla fix will be better served with the previous Godzilla release. 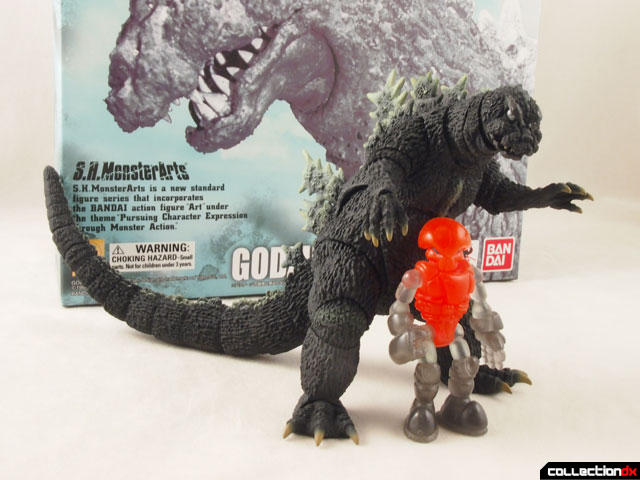 2 comments posted
I'd like to see the a version

I'd like to see the a version of him from the 84' movie, when he was sporting the fangs. It could come with a little Super X!

But this looks nice too.

Funny that you mentioned the eyes. I've always thought that this particular version of Godzilla looked like he had bad cataracts. It's more noticeable in close-ups. http://orch.blog.so-net.ne.jp/_images/blog/_a95/ORCH/z05.jpg