Steel Jeeg, or Kotetsu Jeeg (鋼鉄ジーグ) hails from the 1975 anime series of the same name. It ran for 45 episodes. Jeeg is a very popular character, particularly in Italy, but for some reason I've never quite seen the appeal. For that reason, it's strange that I even own this toy. Not so much that I would buy a jumbo of a character that I don't care much for, but in this case, I actually did something that I have rarely done in jumbo collecting. I overpaid. I had not managed to get a true, licensed Japanese jumbo for something like two years when suddenly I found myself with some extra money to spend and a strong desire to add to the collection. Unfortunately for me, at the time no other jumbos of interest were available and I just knew that if I didn't act then, I would likely end up blowing the cash on other things. So I bid higher than I should have and ended up winning. 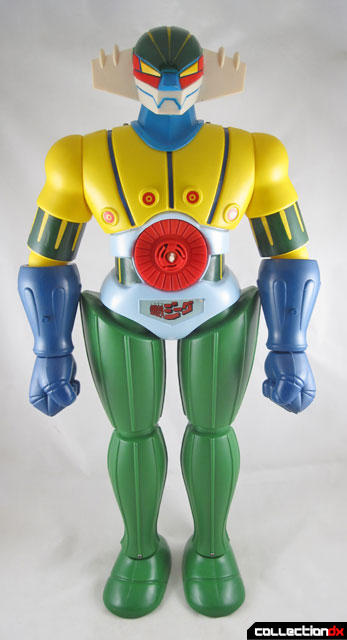 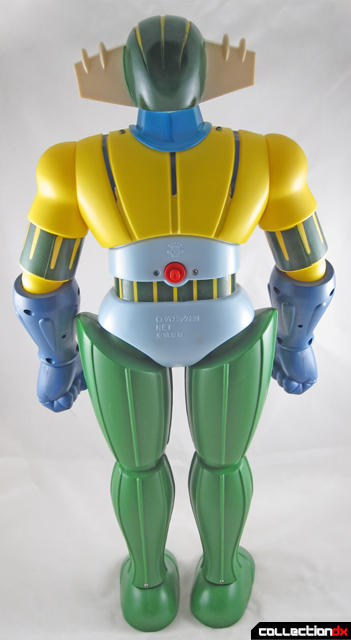 Jeeg is somewhat unique in the world of vintage jumbos since it towers above most others at 26" tall. While this can be an enticing reason to buy for some people, I actually don't like that it stands out. I'd prefer the uniformity of size in the lineup. Furthermore, its size can actually make it tougher to display if space is a concern for you. If it were not for the fact that I have some jumbos that are slightly smaller than normal that I can put on the shelf underneath Jeeg, I would not be able to display him at all with the rest of my jumbos. 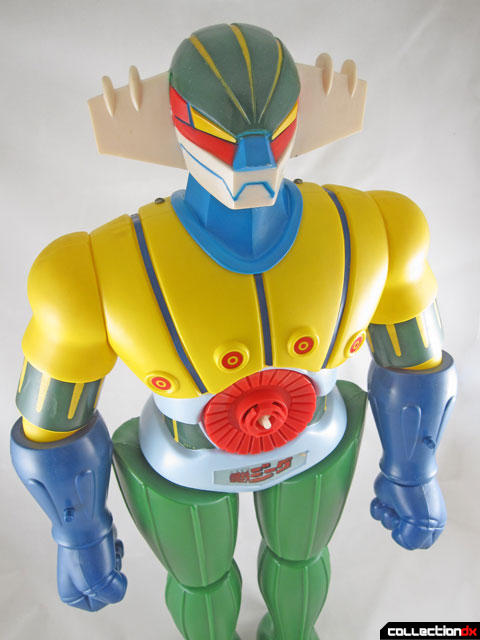 Like most jumbos, Jeeg has very little articulation. The arms move up and down and the legs and fists can be turned, but that's about it. You can't even turn the head. 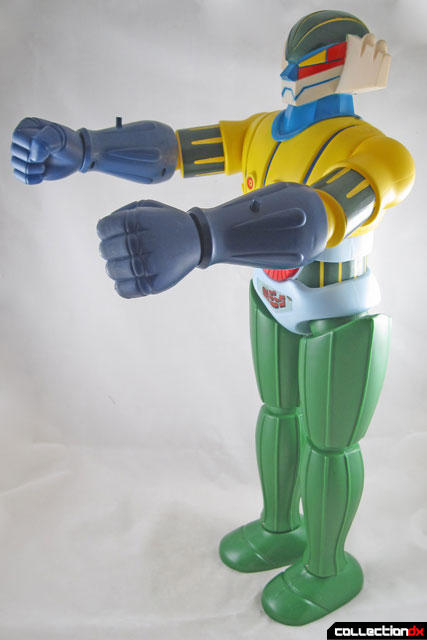 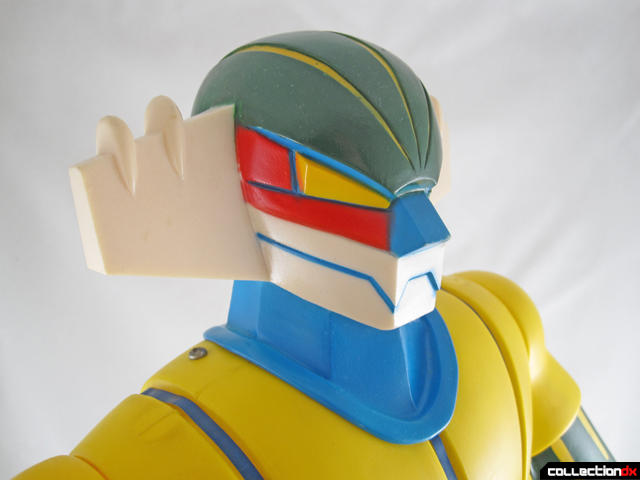 Traditional jumbo features, such as shooting fists, are included. This toy is notorious, however, for having such strong springs that the tabs that hold the fists in are often broken. With that in mind, I decided to do as I have done on most of my cheaper quality bootleg jumbos and remove the springs. This way I can display it with the fists locked in without fear of straining and ultimately breaking the plastic. 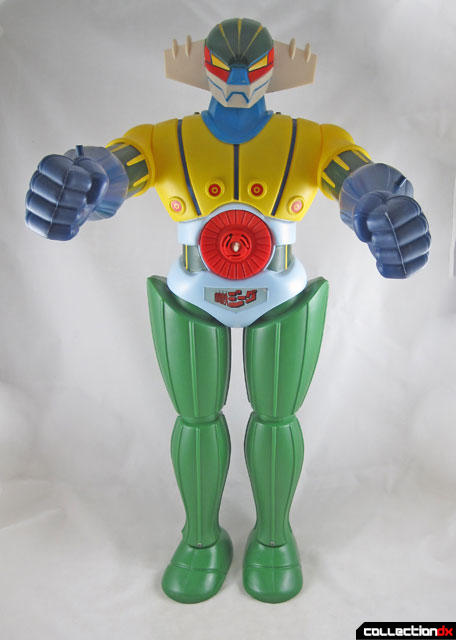 A secondary play feature is also included. Jeeg shoots spinning discs from his waist. If this sounds familiar, it should. Many of the knockoff junior machinders sold in Italy have this gimmick. Unfortunately for me, mine was missing the spinners when I got it. 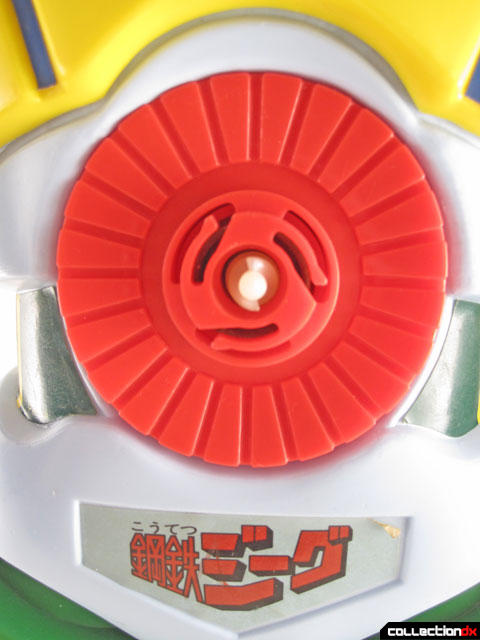 Another sort of odd feature to this toy is the way it is designed. Although not a magnemo toy itself, the toy was sculpted to depict the magnets that are seen in the smaller, diecast version. Notice the faux ball joints at the elbows and hips. 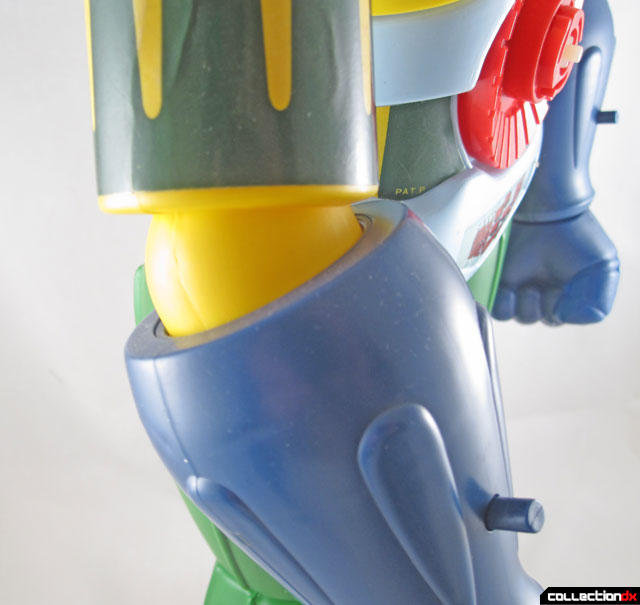 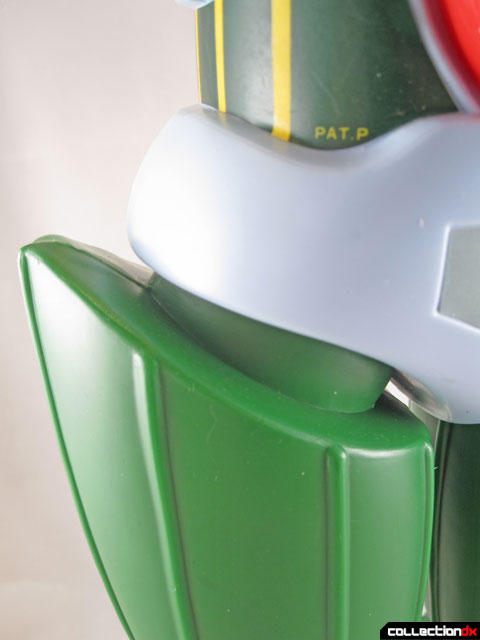 Lastly, the box is kind of just "OK" in my opinion. I like the idea of combining images of both the toy and some original artwork on the front, but frankly I'm not a big fan of the art. 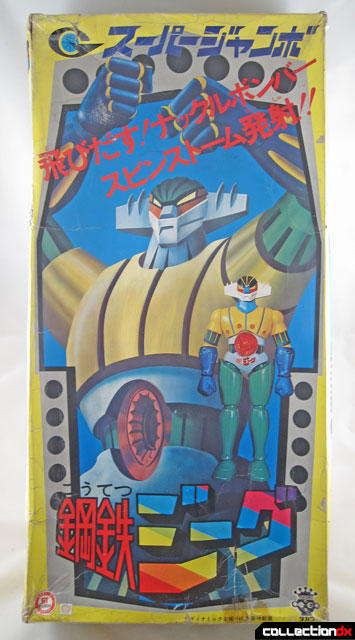 One thing I noticed on the box is that the waist sticker with the name written on it is larger than on the actual toy. I'm not sure if this was just a prototype image or if there is a variation among the releases out there. If it was released with the writing filling that entire area like on the box, I've never noticed it. 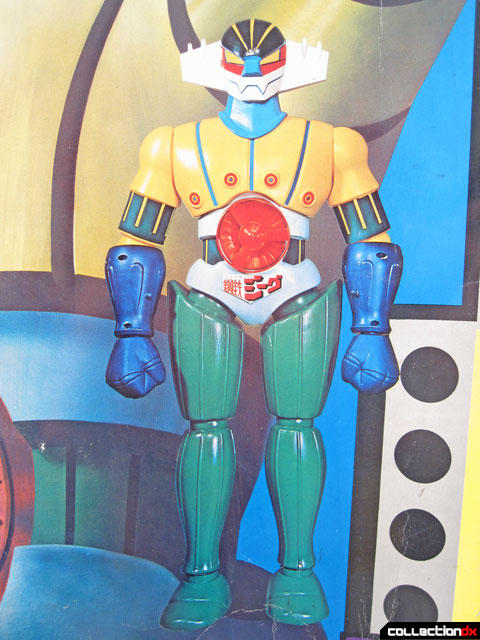 The sides of the box feature the ever popular cutaway image showing the inner workings of the robot. There is even a sort of parts checklist, presumably telling you what each part's function is, although I can't read Japanese well enough to confirm that exactly. 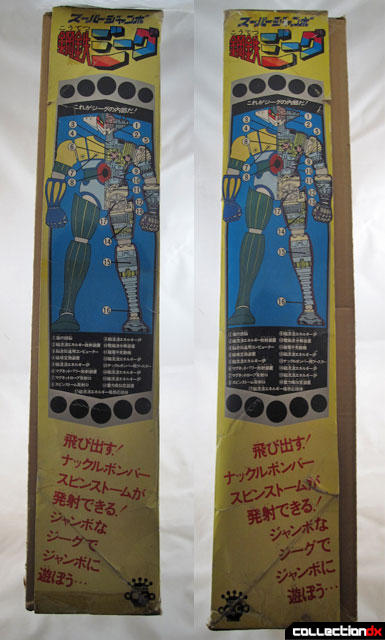 The Super Jumbo Jeeg is a pretty good toy, but I suspect you'd probably get a more glowing review from someone who is a bigger fan of the character. As it is, I like it well enough, but I tend to find myself regretting buying it and wishing I had held out and saved up for a character that I like more.