He's one of my childhood favorites and he started it all in episode one of the Generation one cartoons by being the first Transformer seen in the series. Wheeljack is the Autobots' engineer and scientist. He's always coming up with stuff that works and sometimes doesn't. He gave us the Dinobots so that has to count for something, even if they are lacking in the intelligence department. His G1 toy was very popular when I was a kid. He just looked really cool in those three colors. The original toy design overall was a bit rubbish, looking like a gorilla, but that didn't stop me from wanting one. I never did end up with one however. Fortunately, Hasbro has given us another chance to have a cool looking Wheeljack. This isn't some crazy looking robot that looks nothing like Wheeljack. It is, however, a repaint, but a well executed one. It really does capture Wheeljack's looks.

I'm going to start off with his alternate mode. Originally, it was based of a 1973 Lancia Stratos rally car with Alitalia livery. The new version is not based of the Stratos, but is visually inspired by the original's graphic scheme. You'll notice this is a repaint of the Generations Turbo Tracks. The only differences in this mode are color schemes and spoiler treatment. The front end has a very 90's Japanese automotive tuner look to it with its large front splitter. 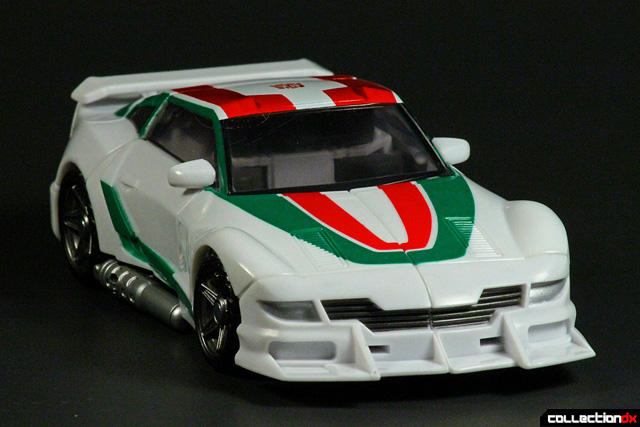 On the side you will notice the door sills have what seem to be exhaust pipes. I believe they are guns since the car has exhaust tips at the rear. These serve a purpose in robot mode. 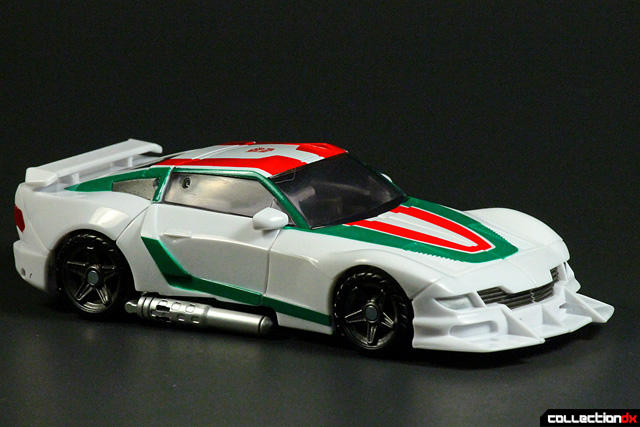 The rear is also the same as Turbo Tracks except they painted the panel in the center. Finishing off the rear of the car is a tasteful spoiler. 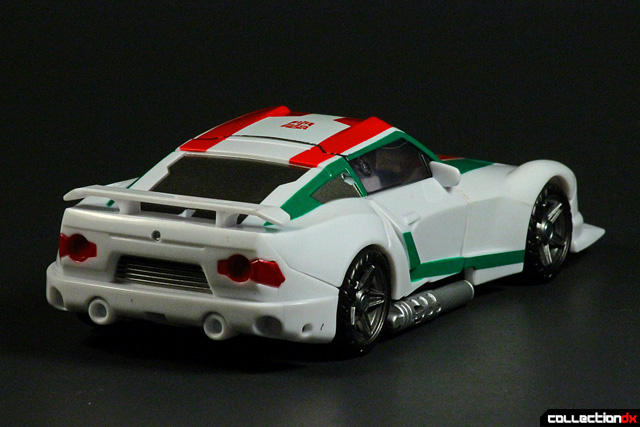 The bottom of vehicle mode shows where all the bits and pieces go when he's rolling. 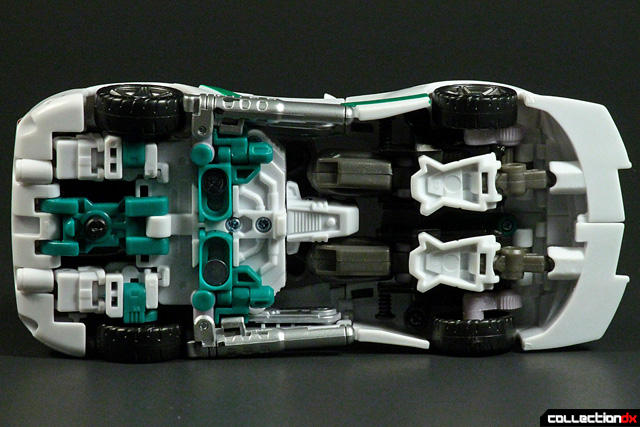 Here he is in robot mode. It doesn't take a genius to figure out that this is Wheeljack. I'm the type of Transformers fan where I like the robots to be recognizable any time their look is updated. I like them to have a recognizable face and color scheme. This totally fits the bill. I love it. I gladly shelled out for this repaint. 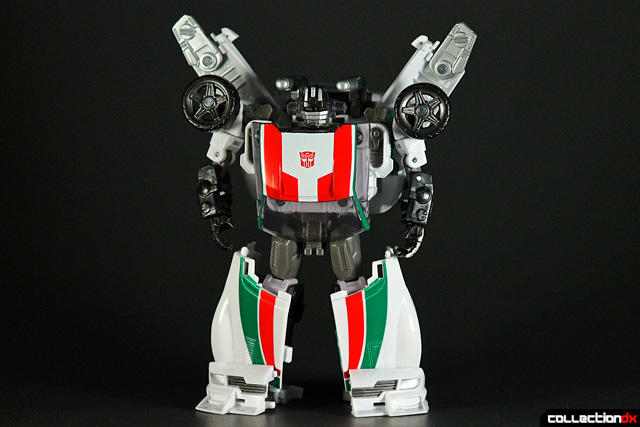 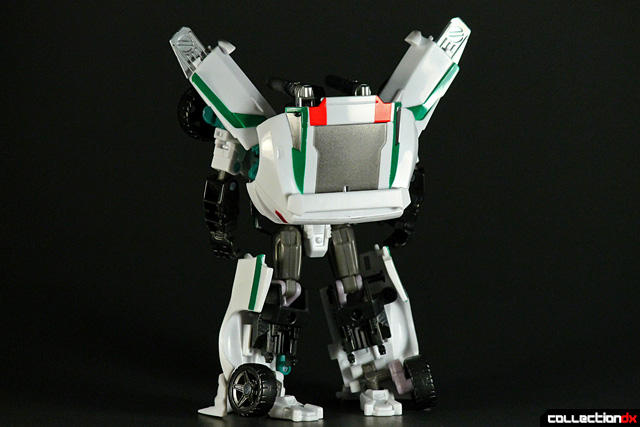 Take a closer look and you will see that the head is very faithful to his G1 counterpart. There is no mistaking who this is supposed to be. Since his "ears" are of the light-piping variety, it would be interesting to see if LEDs could be hooked up to light up like the cartoon. 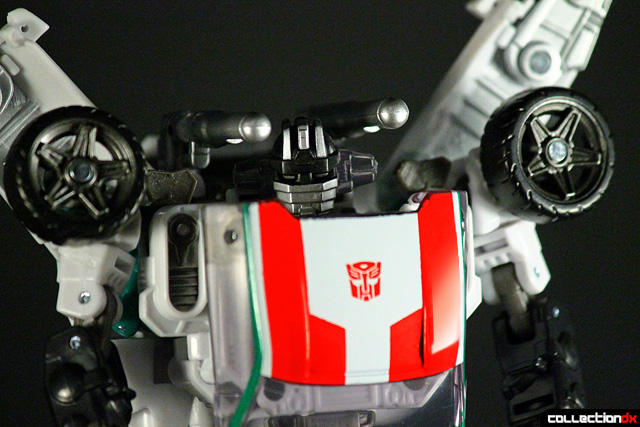 The figure is pretty poseable and looks great in any position. Notice that the side pipes/guns become his wrenches which he uses to fix things or conk Decepticons in the head. 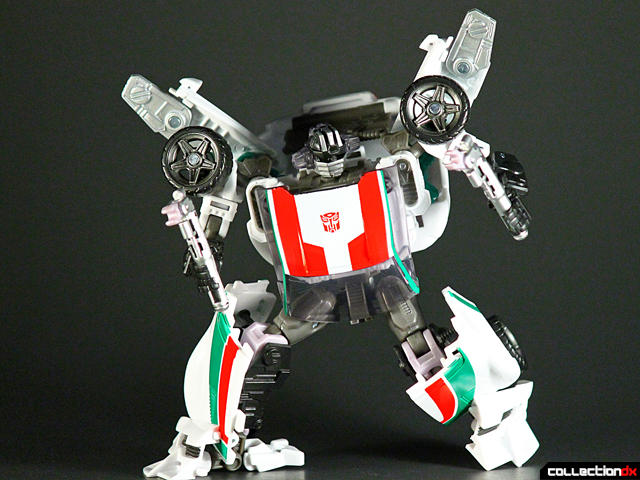 I wanted to end off this review comparing him with his mold-cousin Turbo Tracks. You will see the similarities between them in addition to their differences. Wheeljack is a tad shorter. Another thing to note is that Wheeljacks robot mode has the hood panels on the front as opposed to Turbo Tracks who has them on the back of his legs. Basically Turbo Tracks' feet become Wheeljack's heels. The enormous front splitter in car mode becomes Wheeljack's feet. In his hands you will see the gun that folds neatly away inside car mode just like Turbo Tracks. 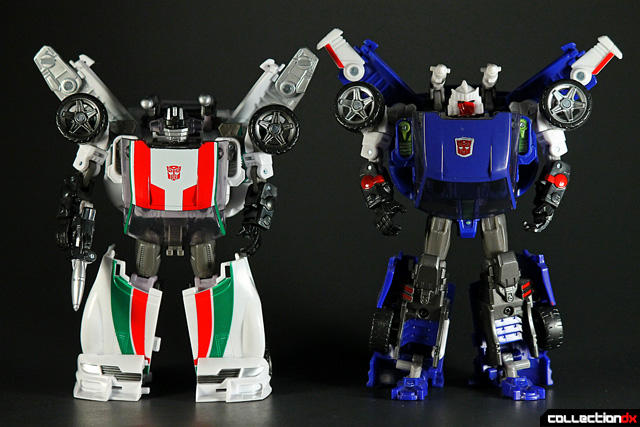 If it's not already obvious, I enjoy this figure. It is in my opinion, a very attractive eye-catching piece. Hasbro may have managed to make a better deco than Takara's Japanese United version. Of course beauty is in the eye of the beholder. I enjoy the fact that he doesn't do face-plants-to-shelf-dives like Turbo Tracks does. He is able to pull off flight mode like Turbo Tracks if you wanted to. These are only just starting to become easily accessible, at least in my area. If you like the design, I suggest you pick it up. Really well done.

He's kind of stumpy looking, but he looks great.. I'll keep an eye for him.

The interesting thing about Wheeljack is that according to a recent interview with TakaraTomy designers, this mold was designed with Wheeljack in mind and Tracks was only made into it after Hasbro suggestions. To a degree this is supported by Wheeljack being released in the earlier Generations line rather than Reveal The Shield.

I really like this toy and I'm glad I picked up mine from BBTS few weeks ago, its written Wheeljack all over it.

I'm not sure why they placed 3,5mm weapon ports on the legs, but I assume there will be some guns that fit in there despite the awkward location of the ports.

You know I felt like mentioning in an earlier draft of the review that this mold almost seemed to be made especially for Wheeljack, it seemed so fitting. Thanks for that bit of info

Wheeljack and Scourge are the only Generations I really want.

If you look at the back inside of the legs you will see clips to attach the wrenches to.

That way you can clip his missle gun on to his shoulder for the correct look.

I really miss wheel jack. When i first heard there was going to be a Transformers movie i had hoped he would make an appearance somewhere throughout the trilogy, or at least in one of the new Transformers Animated series that have come and gone over the years. Would have made a better entry to the series than sideswipe, does anyone ever recall any transformer having wheels for feet?! like ever ?!!

Wheeljack is in Transformers Prime!

The character Que (the one that looks like Einstein) was to be called Wheeljack.